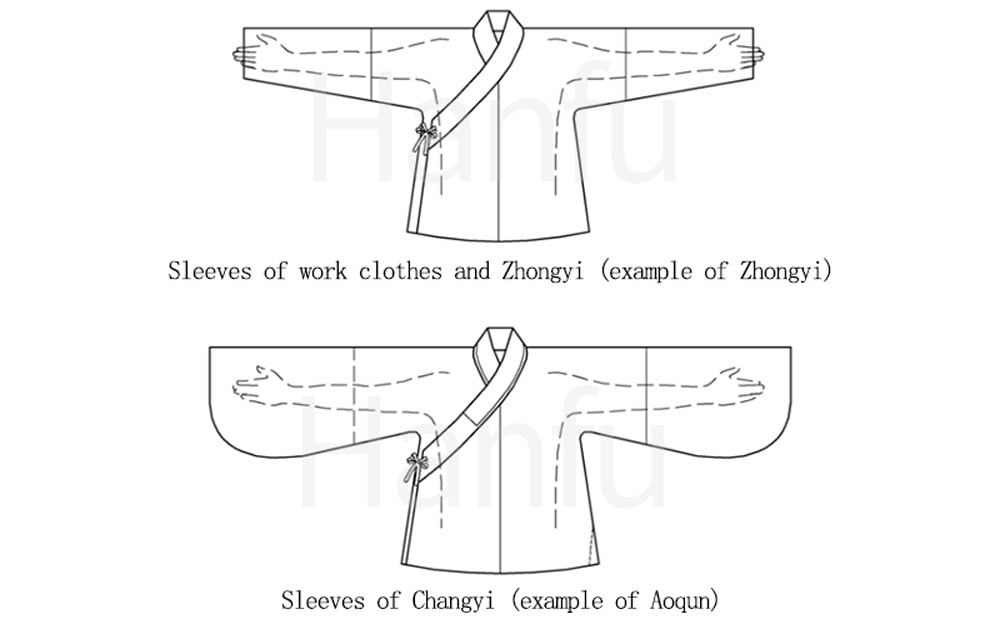 Hanfu is the traditional costume of the Han people, also known as "Han Zhuang" or "Hua Fu".Since the time of the Yellow Emperor, Yao and Shun, hanfu has taken a basic form, and after the inheritance of the rituals of the Zhou Dynasty, it has formed a perfect system of clothing and crown and spread to the people in the Han Dynasty. The hanfu had been developed for thousands of years until the fall of the Ming Dynasty, when it was temporarily stopped.

The Ming Dynasty was the era when the art of hanfu was the greatest, and its fabric weaving, printing and dyeing, and dress cutting, and sewing skills reached an unprecedented height. The Ming Dynasty costumes in the surviving relics are sufficient to show the profoundness of Chinese costume culture. For example, the costumes of some traditional operas, such as Beijing opera, Kunqu opera, and Yueju opera, have more elements of hanfu. Buddhist and Taoist costumes based on hanfu have been preserved and are still developing independently after the fall of Ming Dynasty; hanfu can still be seen in some ancient books and paintings.

There was a small-scale hanfu revival movement in the late Qing Dynasty and the early Republic of China, but for various reasons, the revival of hanfu did not really continue in the Republic of China, which inherited the Qing Dynasty clothes to a certain extent and is still under the great influence until today, for example, cheongsam and Tang suit (modified Magua) are often considered as the mainstream Chinese clothes.

In the early twenty-first century, a "Hanfu trend" began to emerge in China, and through the Internet, newspapers, television and other media, more and more people began to recognize and love hanfu, and there were more and more businesses making and selling hanfu, and more and more hanfu-related clubs and social activities, and some hanfu enthusiasts began to learn the cutting and sewing techniques of hanfu.

In recent years, there have been many Chinese historical dramas that have been broadcasted, and the costume style has improved compared to the past. People are enjoying the beautiful costume character shapes in the dramas while enjoying the plot, and the costume costumes themselves have certain shades of traditional costumes. However, the costumes in the drama cannot be equated with hanfu. The fundamental reason is that most of the costumes of film and TV dramas borrowed from opera costumes are not completely correct in shape and do not fully reflect the characteristics of Chinese hanfu costumes, and some of them are common costumes of multiple dynasties, or they are guilty of mixing and matching through dynasties.

According to the author (Huafeng Mozhu), the modern hanfu is based on the ancient form, combined with the physical characteristics of modern people, using modern drawing and cutting sewing technology, and adding modern aesthetic sense and restored into the costume, whose design is based on ancient books, existing costume relics, and ancient figure paintings. From the day I (Huafeng Mozhu) became a hanfu enthusiast, started to collect information about hanfu making, learn about hanfu drawing, cutting and sewing, and finally finished this set of Hanfu cutting and sewing patterns reference guide with a more complete system after unremitting efforts.

This guide is based on the Ming-style hanfu, and includes sewing patterns of Chinese clothing such as the Zhongyi, Aoqun, Pan collar robe, Zhiju, Zhishen, Daopao, and Shenyi, etc. Each style is detailed to each standard model, with detailed diagrams and precise dimensions in the detailed drawings. The purpose of this guide is to let more people understand the structural characteristics of hanfu, learn about hanfu, and more importantly, to provide hanfu lovers with the corresponding hanfu cutting and sewing reference templates, so as to make a small contribution to the revival of hanfu. Believe that one day, hanfu can be revived and become one of the dresses worn in important festivals, meetings and ceremonies, and with a little improvement, hanfu can become a casual dress worn by the general public on a daily basis.

I. How to use this guide

First of all, this guide is not a tutorial in the strictest sense of the word, but is more focused on showing the patterns of each style and model, and its dimensions are more precise and detailed, so it can be used for the cutting and sewing of common hanfu. In addition, the hanfu clothing form in this book cannot avoid being slightly modified, so it may not exactly match the ancient style, but it can definitely be called hanfu.

At present, there are more and more hanfu vendors on the market, but hanfu with exquisite in forms and good workmanship are still relatively expensive, not to mention the dress products of high-end hanfu brands. It is not surprising that hanfu made of top quality fabrics and exquisite cloth patterns can fetch high prices.

Hanfu lovers can refer to this guide to find out their favorite hanfu styles, and then find out the most suitable clothing pattern for their own models to make their favorite hanfu, and if you don't have time to make or have less cutting skills, you can find a professional tailor to do it for you, so the cost of making hanfu should be lower than the cost of buying hanfu directly from a hanfu merchant, and you can also choose your own fabric and take accurate measurements to get your favorite hanfu. One of the author's goals in writing this guide is to try to popularize hanfu, to make it cheaper and simpler to make personalized custom hanfu, and to change people's previous perception that hanfu is expensive and can only be made into formal dresses.

Each chapter of this guide will first introduce the hanfu form of that chapter, followed by a reference chart for each size, and then the order of the types of drawings for each size will be appearance drawings, perspective drawings and expansion drawings, detail size drawings.

II. About specification and size

When you make or customize a hanfu based on the drawings in this guide, it is best to combine your own body characteristics and consider the season of wear. If there is something not quite right, please adjust the details of the size and process by yourself, and optimize and refine the specific cutting method by yourself, for example, you can shorten or lengthen the length of the sleeves according to your preference, or add sleeve edges for beauty; you can adjust the length of the pants and skirt by yourself; if you make a jacket for autumn and winter or a loose top, you can enlarge the collar, bust, cuffs and other data of the finished garment as appropriate......

Interpretation of some data

A special note on the through-arm length of hanfu, because it is a size that varies a lot when making hanfu, and is greatly influenced by style and personal preference. The through-arm length mentioned here is not the same as the benchmark through-arm length mentioned above, but the distance between the two cuffs after the clothes are unfolded. The sleeves of modern clothes we usually wear are usually only as long as the wrist, while the sleeves of hanfu (except for the Banbi style) are usually much longer. Hanfu long-sleeved clothes are roughly divided into three types according to the size of the sleeve length, i.e., work clothes and Zhongyi, Changfu (常服, regular clothes) and Lifu (礼服, formal dresses). 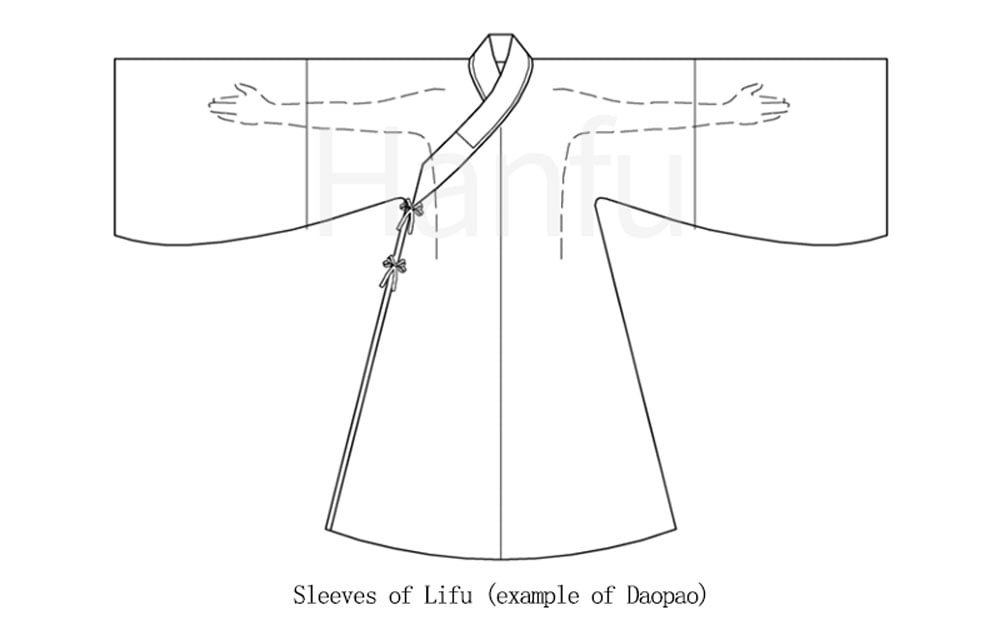 Because this book is mainly about hanfu pattern-making drawings, each chapter will first explain the shape, but will not use a large amount of text to explain the specific tailoring process. If you have some basic sewing skills, you can learn about the sewing process of hanfu and learn by analogy.

Example of Banbi stitching (stitched in the direction of the arrow in the picture): 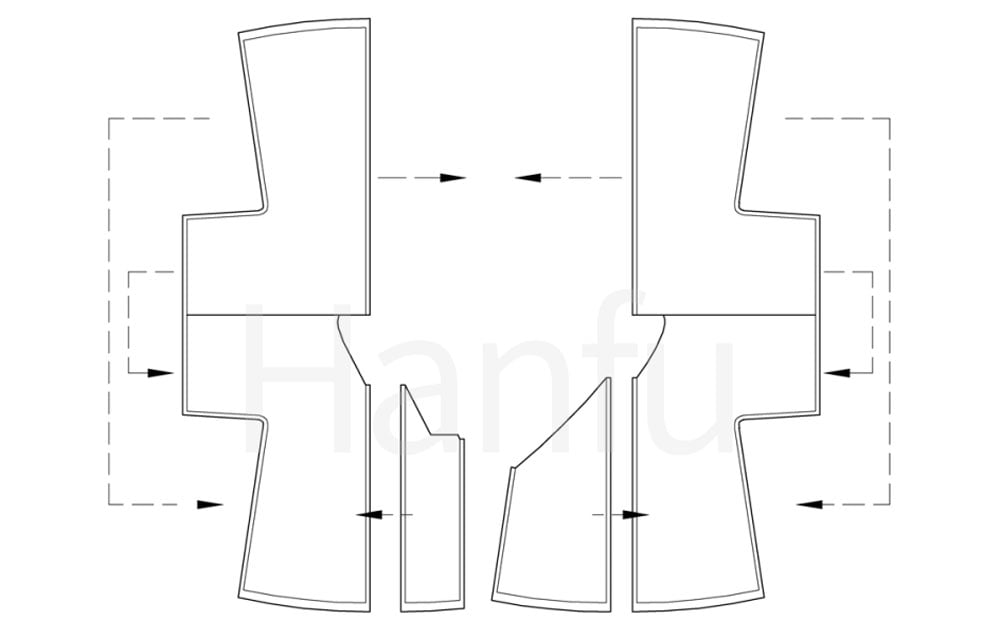 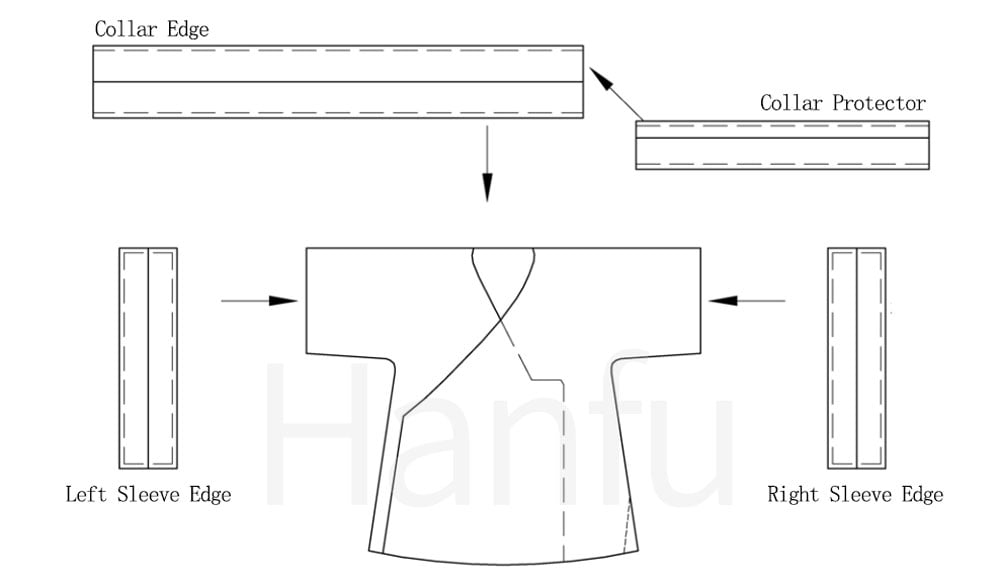 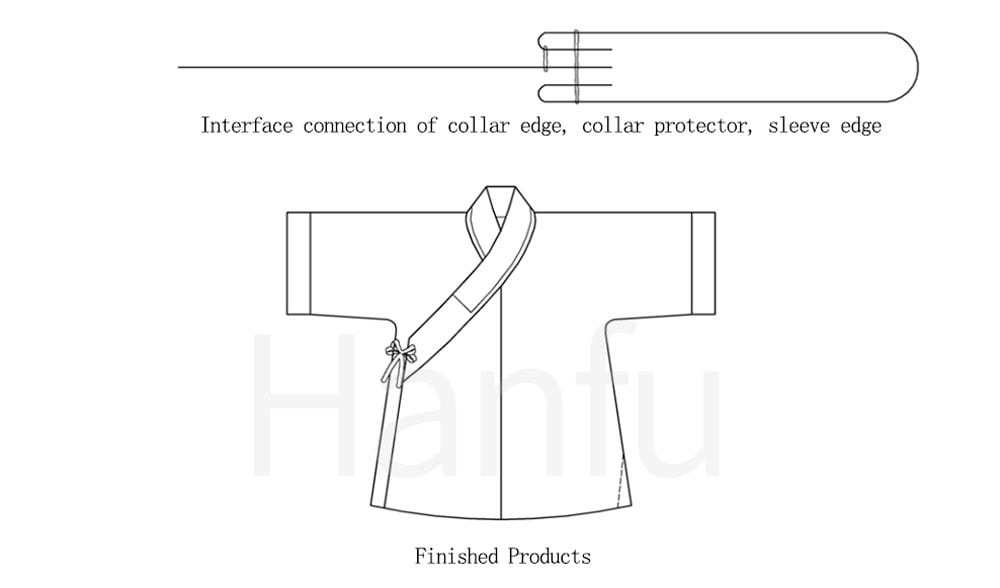 Note: The above diagram is a seam illustration and does not indicate the absolute order of the seams, for example, when actually sewing, the sleeve edge needs to be sewn onto the edge of the cuff before the sleeve is sewn into shape.

Click to view sewing patterns for each hanfu style: