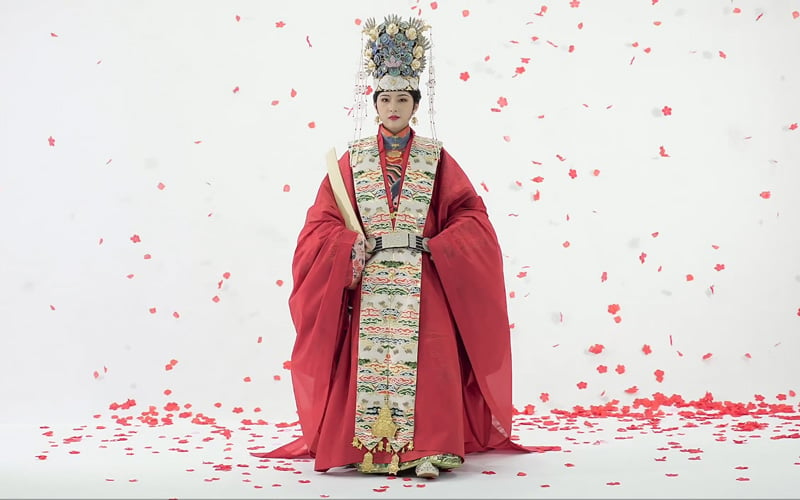 The ancient Chinese were designed the clothing and crown system with distinct rank differences, to conform to the social order.

Women's clothing is the same as men's, was constrained by system and etiquette. 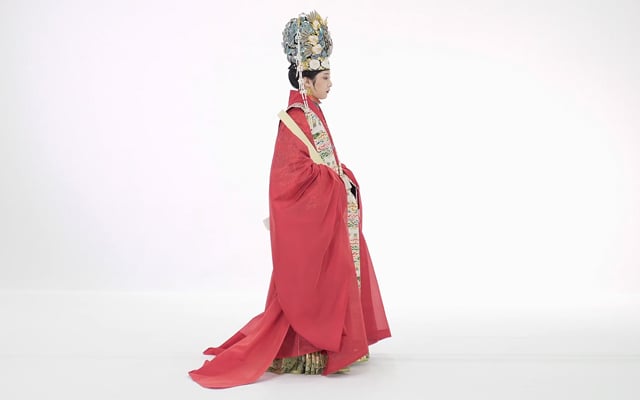 This article, centered around Ming Hua Tang's hanfu, introduce you to the detail of royal hanfu dress for noblewoman (Ming Fu, 命妇) in the late Ming Dynasty.

The Definition of Ming Fu

According to Ming Dynasty regulations, officials from the first to fifth ranks are eligible for the "Gao Ming" (诰命).

The title "Gao Ming" is mandated by the imperial court. It is the "sacred decree" commonly known as folklore, like the exhortation came from The emperor himself.

The "Gao Ming" is all vouchers for the court to grant officials and their relatives. According to the rank of officials, obtaining a "Gao Ming" sometimes requires considerable effort. For example, have made achievements in politics or the military. 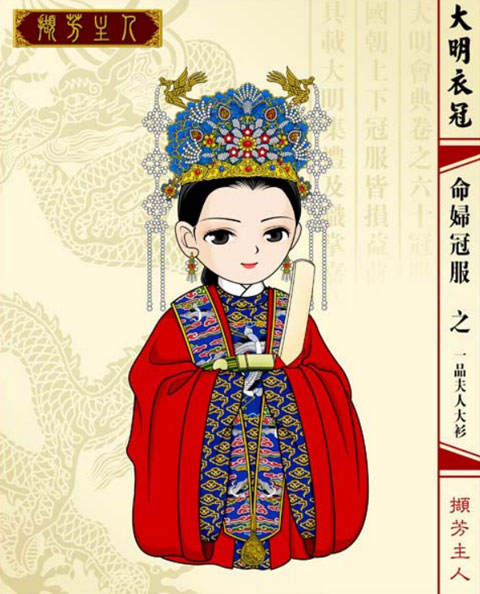 Women follow the rank of their husband or son. A woman who is granted a "Gao Ming" is called a "Ming Fu" (women with imperial exhortation).

According to the rank from high to low, there are titles such as Fu Ren(夫人, the Honorary), Shu Ren(淑人, the Kindness), Gong Ren (恭人, the Respectfulness) and Yi Ren(宜人, the Pleasantness). 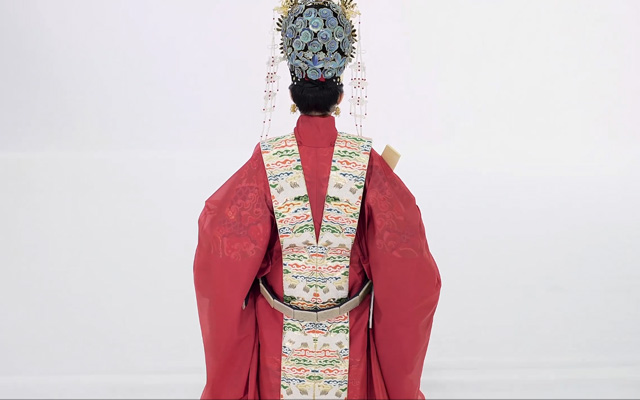 Detail and Layers of royal hanfu for Ming Fu 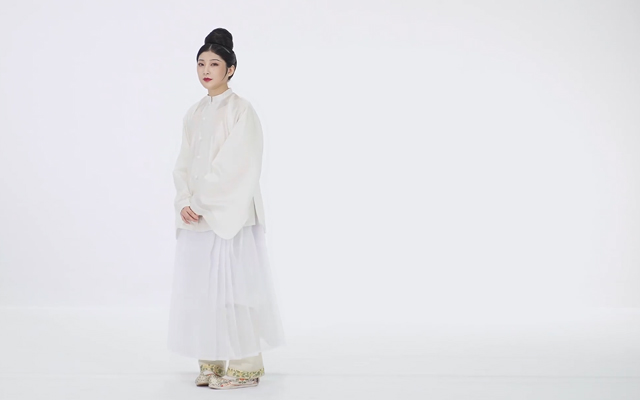 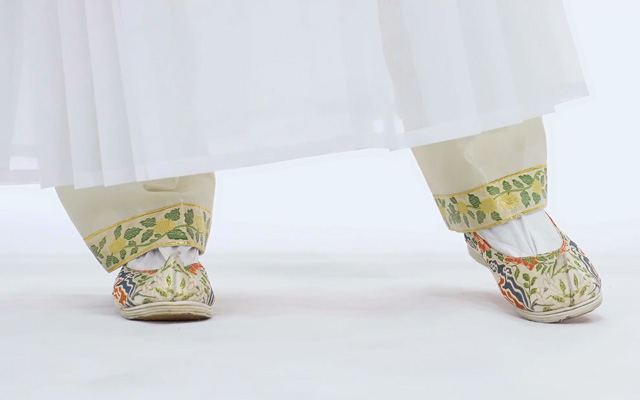 The style of skirt is usually "Ma Mian Qun" (马面裙, skirt with the shape of horse face). 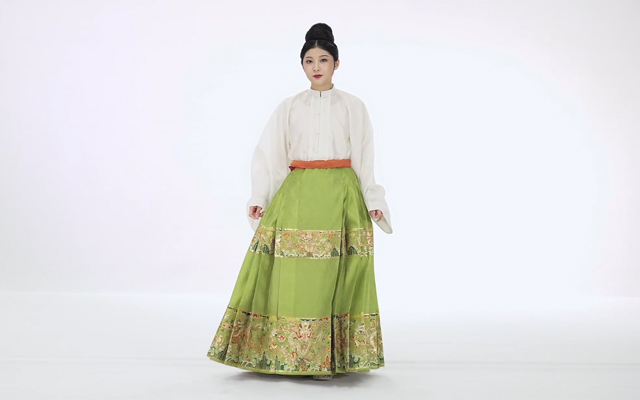 So-called "horse face", refers to the front part of the skirt, where the front and the back center and the inside and outside overlap.

When the Ming Dynasty madam wore formal dresses, often set off with a green skirt. 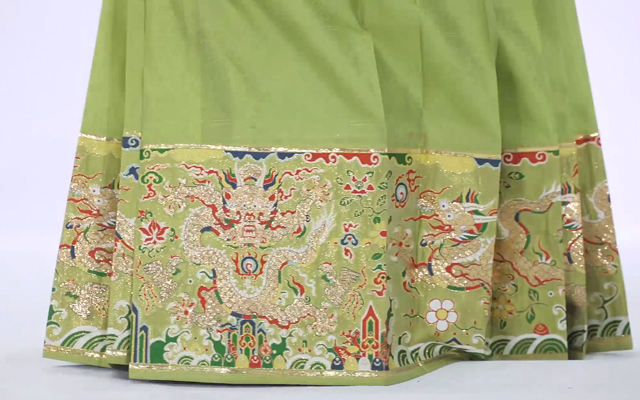 The pattern of this skirt is decorated with a high-grade five-claw python dragon and phoenix pattern, embodying the identity of the lady.

After putting on the skirt, it's the turn of the top. When wearing formal dresses, most of the inner shirts choose blue. 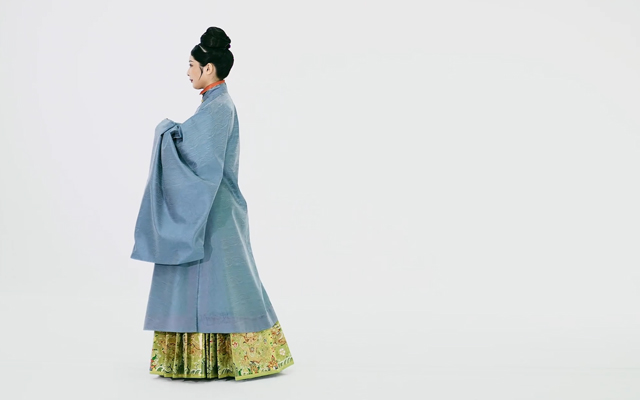 There are also fashion changes in the collar style of women's clothing, in addition to hand-over collar, stand-up collar, large placket, right gusset, all representative style after the mid-Ming Dynasty. 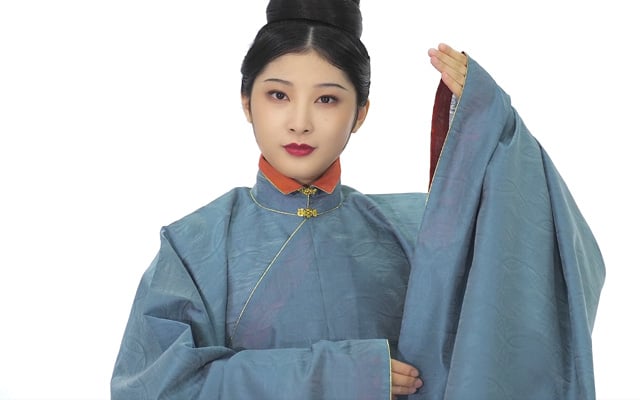 The next is "Mang Pao" (蟒袍, a robe decorated with dragon form of python patterns), the dress of the "Ming Fu" needs a round neck gown, and the noblest among them is the "Mang Pao". 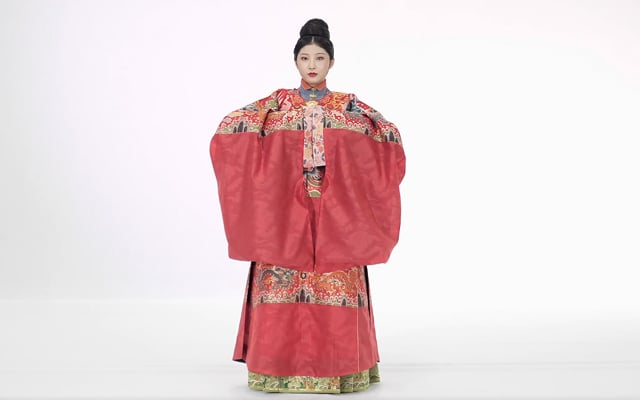 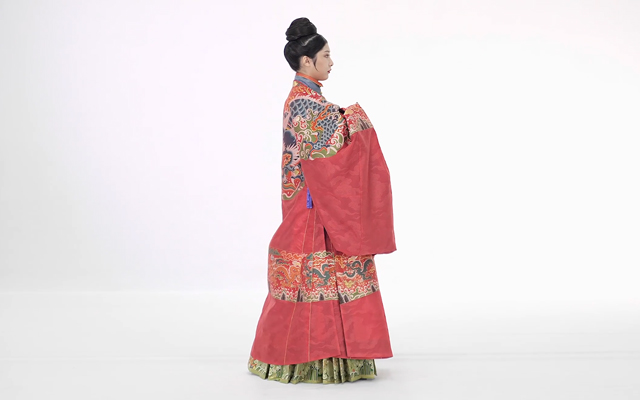 The python pattern of the "Mang Pao" in the late Ming Dynasty became very big, has a strong sense of visual impact. 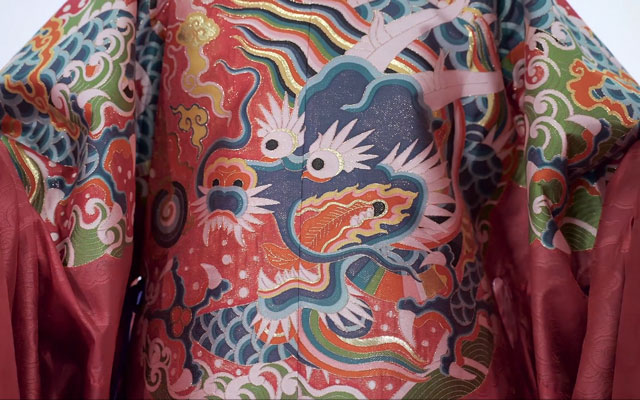 The ornamentation of the "Mang Pao" is mainly concentrated in the chest, back, shoulders, arms, and hem, called "Yun Jian Tong Xiu Xi Lan" (the decorated shoulders, sleeves, and knees). 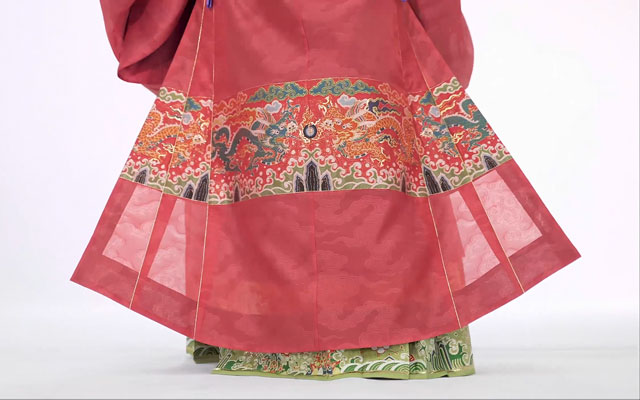 The outermost layer of the "Ming Fu" dress is the "Da Shan" (大衫, the honorable coat) and "Xia Pei" (霞帔).

"Da Shan" evolved from women's clothing in the Tang Dynasty (7th to 10th century), basically finalized by the Song Dynasty(10th to 13th century). 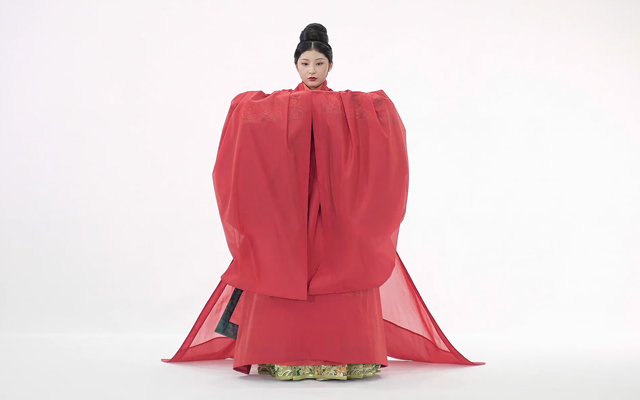 Ming Dynasty stipulated the use of red for "Da Shan", straight collar without lapels, symmetrical, large sleeves, triangular pocket on the back, to store the tail of "Xia Pei". 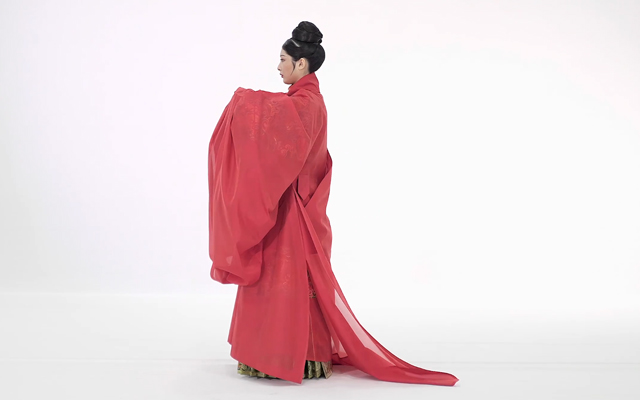 In the late Ming Dynasty, the tail part of "Xia Pei" was stitched up, buttons on the front part, shaped like a vest, the position of the triangular pocket on the back gradually move up, no longer has an original function but a pure decoration. 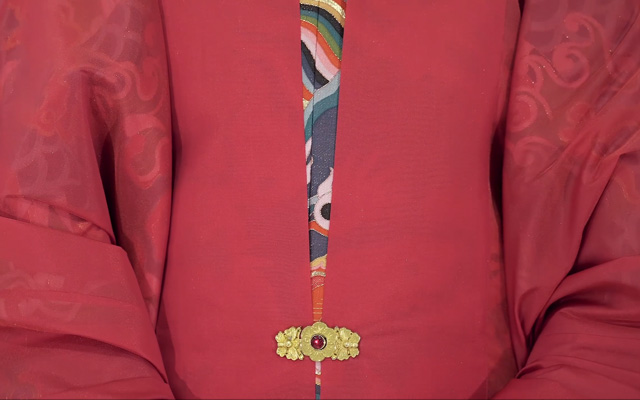 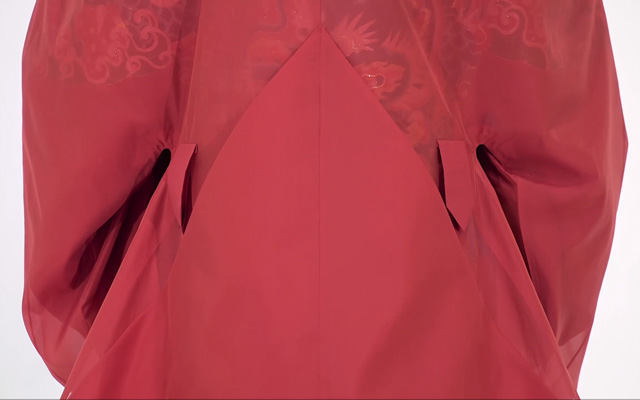 Back of Da Shan

Let's take a look at "Xia Pei" (a sash decorated with colorful cloud patterns). The "Xia Pei" of the Ming Dynasty continued the Song Dynasty form. 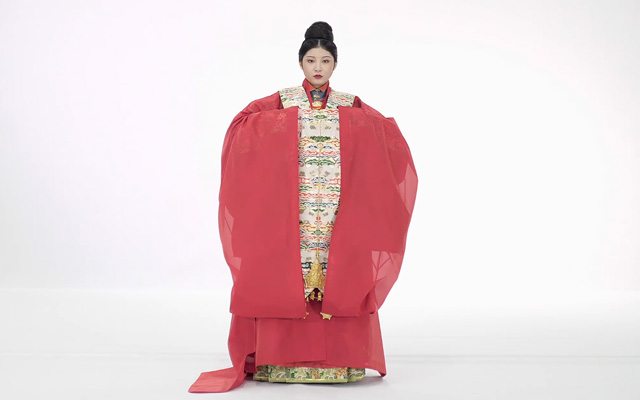 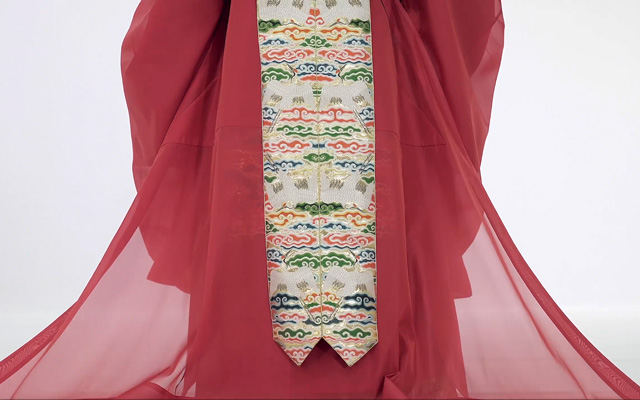 Back of Xia Pei

The top of "Xia Pei", gradually evolved into the form of double sword heads in the late Ming Dynasty. The number and arrangement of the metal pendant suspended on the "Xia Pei" are becoming more and more complicated. 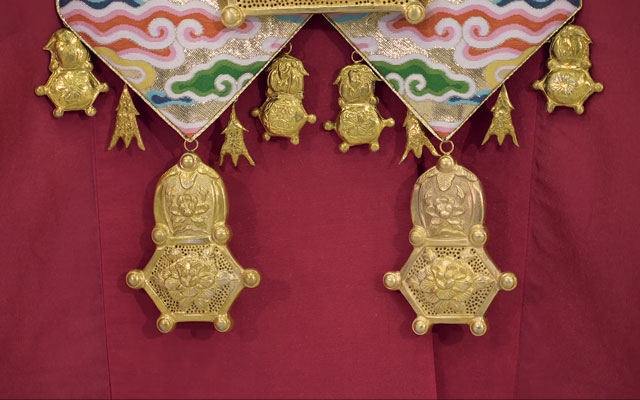 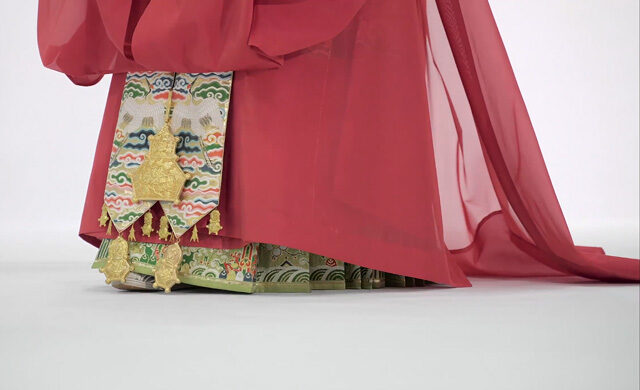 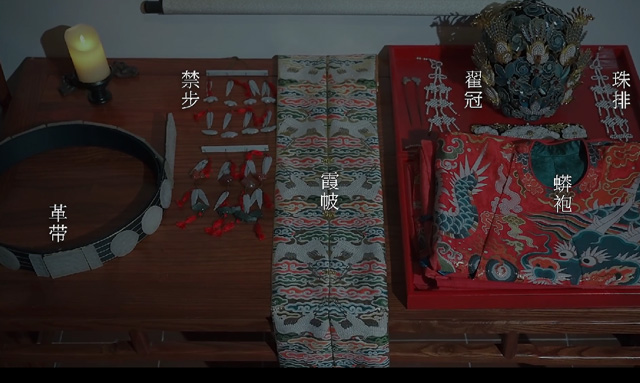 The one worn around the waist is called "Jin Bu" (禁步), which is made by connecting the jade blades and jade pendants with silk threads. 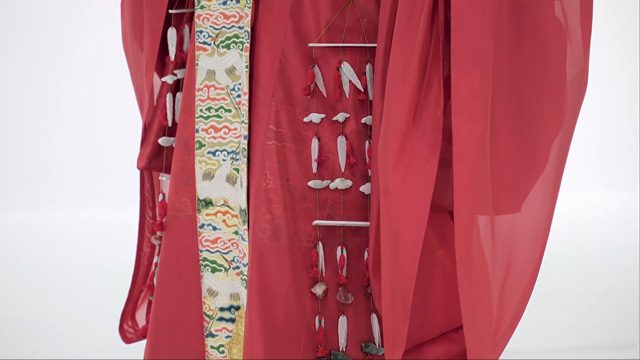 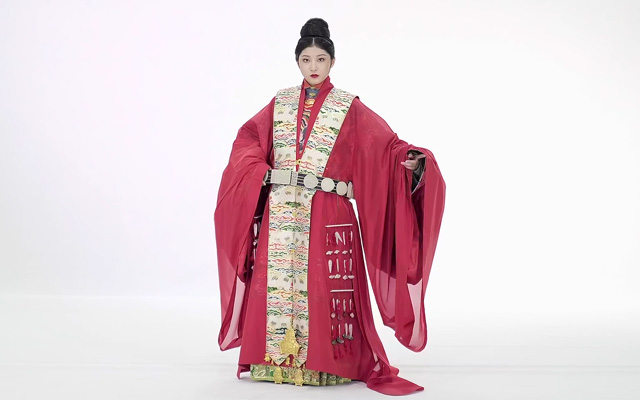 Jade has been an important component of formal dresses in China for thousands of years, it was still continued in the Ming Dynasty. 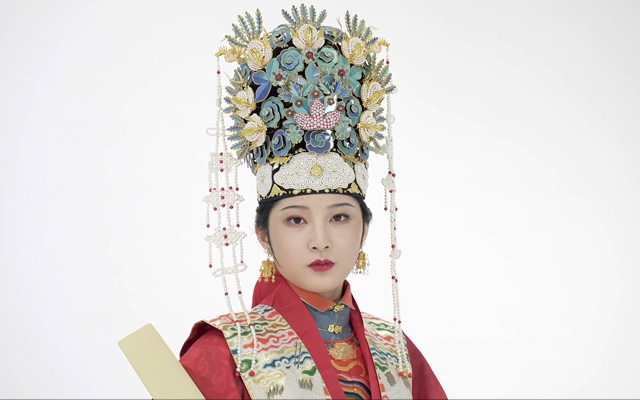 In the growth of ancient Chinese women, hair bun and jewelry are regarded as important symbols. In Ming Dynasty, girls need to shave their hair, in Girl's Generation, started to let the hair grow long.

After marriage, the loose hair will be tied up. Hair bun and the gorgeous jewelry on it, will serve as a symbol of adulthood.

When the Ming Dynasty madam needed to wear the crown, just use a simple top bun as a fixed base. 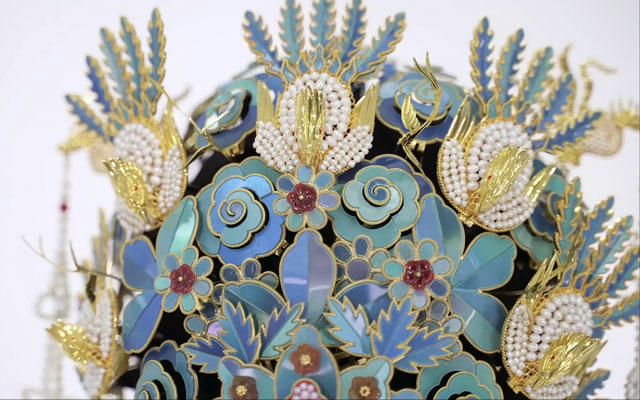 The headdress of "Ming Fu" is "Di Guan" (翟冠, a crown decorated with bird-shaped ornaments), which is the well-known "Phoenix Crown" in China.

According to the regulation of the Ming Dynasty, the rank of "Di Guan" is identified by the number of birds on it, but usually, it is not complied with. Especially when the bride feels she wants it. 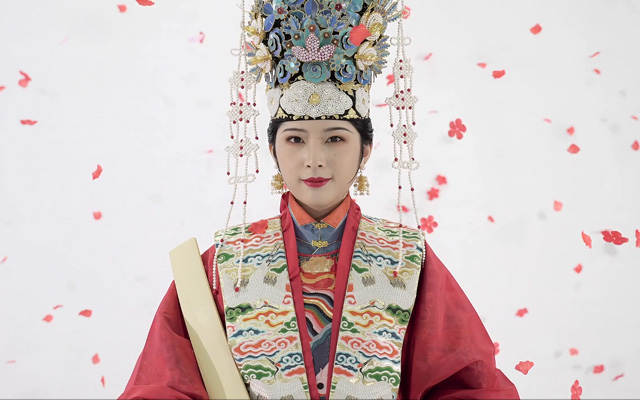 A famous official in the Mid 17th century - Liu Zongzhou once recalled and wrote: "My family was poor, my wife had to bear all the things, including my mother's illnesses, I have failed to give her a 'Di Guan' for all these years as an official. It's always been a regret in my heart that is hard to heal."

It can be seen that, for men and women, the meaning of "Phoenix Crown" is unparalleled.

Above is the whole set of Ming dynasty noblewomen look.

For the complete video of the royal hanfu dress for noblewoman, please click to view.

Ling
Creative License: The article is the author original, udner (CC BY-NC-SA 4.0) Copyright License. Share & Quote this post or content, please Add Link to this Post URL in your page. Respect the original work is the best support for the creator, thank you!
Women Hanfu
Related