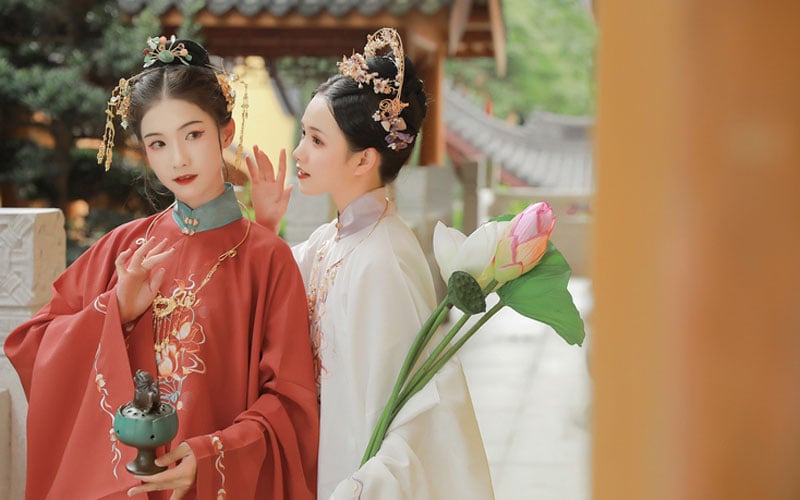 In the middle and later period of the Ming Dynasty, there were some new styles, such as stand collar, and a large number of buttons were used in the conspicuous part of a garment.

It was gradually banned during the Qing Dynasty, but there are still a few styles and features that have been handed down to this day.

The characteristics of Hanfu in the Ming dynasty

In the Ming Dynasty, a series of measures were taken to develop production, which made the industry and commerce develop continuously, and the production technology of each industry has improved. 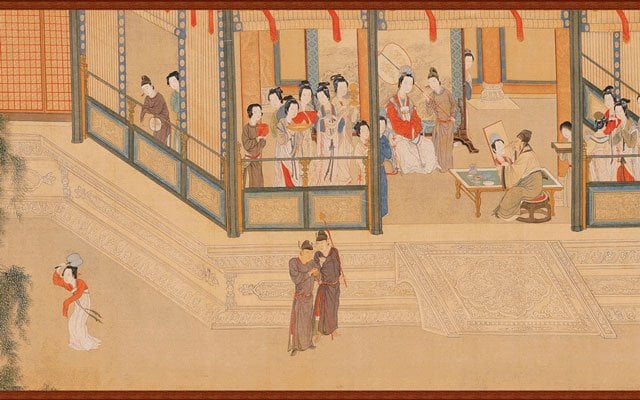 At the beginning of the Ming Dynasty, most people wore cloth to make robes, but later, many people did not use cloth, but used silk and other gorgeous fabrics to cut.

The color also changed from a single blue color to more rich colors, and the style of robes became longer and longer, some even covered the feet, especially the sleeves were very fat and wide. Hanfu in Ming Dynasty has the following characteristics:

The official and men's clothing in the Ming Dynasty were mainly round-necked, which was one of the measures to restore the Han clothing. The round-necked gown in Song Dynasty, and was replaced by the minority culture in Liao, Xia, Jin, and Yuan Dynasties.

Zhu Yuanzhang advocated the restoration of Han characteristics in the Ming Dynasty. In the Ming Dynasty, round-necked robes were prescribed in the form of clear text. It was worn by emperors, ministers, literati, and rich businessmen of all levels, but the pattern and color were different.

Buzi on the official uniform

The system of "Buzi (补子)" is clearly defined. Before the Ming Dynasty, in terms of the patterns on the official uniforms, the twelve Wenzhang was used to distinguish the emperor and his ministers.

In the Tang Dynasty, the prototype of "Buzi" appeared, in the Ming Dynasty, in addition to the emperor, prince, and nobility, they also continued to enjoy the twelve-chapter pattern. In addition, the clothing of civil and military officials was replaced by "Buzi" with the pattern of birds and animals, which distinguished the official positions since then. 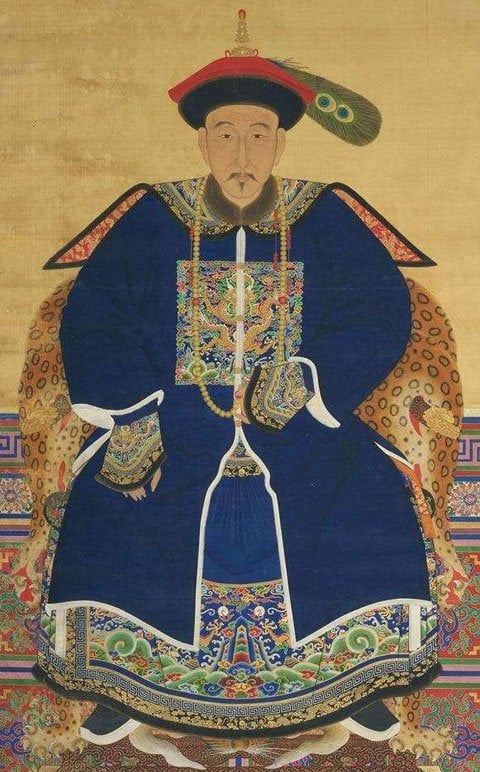 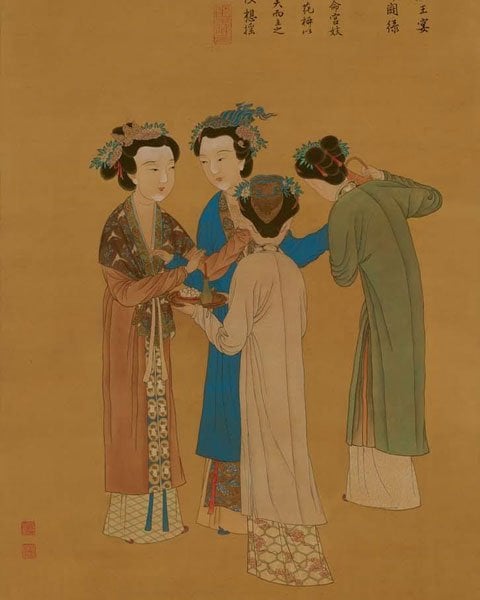 Changes in buttons and accessories

At the end of the 16th century, China gradually used a button belt, reflecting the progress of the times and the innovation of technology development in clothing. 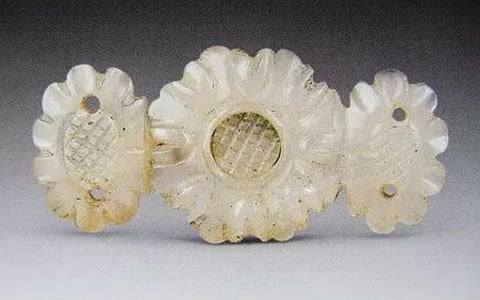 Another characteristic of Ming-style clothing is to wear ornaments on Jin (襟), which is very eye-catching. All kinds of ornaments are made of gold, beads, jade, and other materials. Another special ornament is a gold chain with four small objects: tweezers, toothpicks, earpicks, and knives, all of which are practical articles for women's life.

Ming Dynasty advocates simplicity and frugality, and has strict system constraints. The color of clothing has different regulations according to different levels of officials. Level one to four: dark red robe; level five to seven: blue robe; level eight to nine: green robe. 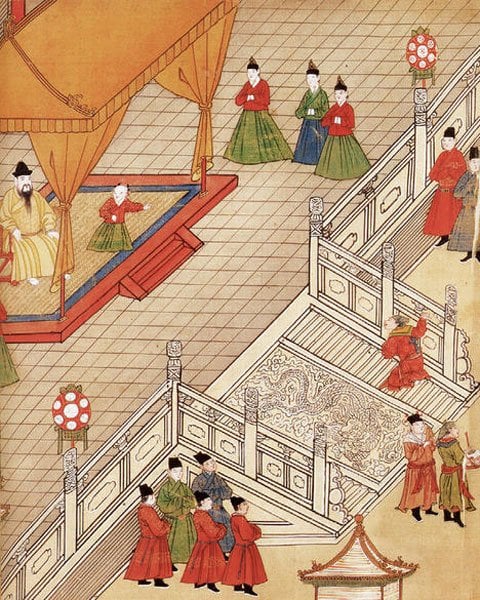 According to the regulations, the dress color of the noblewomen in the Ming Dynasty was: dark pink, elegant green, and yellow, while that of the literati and commoners was only purple-green, peach red, and light color.

The emancipation of people's mind in the middle and late Ming Dynasty made people break through the shackles of feudal autocracy, dress more and more gorgeous, dyeing technology richer.

Ming Dynasty attaches great importance to the restoration of the Han nationality's traditional costumes. At the same time, it is a dynasty with distinct anti-traditional characteristics.

It has a wide range of characteristics and changes according to time. It fully demonstrates the strong imagination and creativity of the Ming people, and reflects the unconstrained and rich atmosphere of the Ming Dynasty's costumes from a perspective.

Aoqun in the Ming dynasty

Women's dresses in the Ming Dynasty have the richest styles, the most exquisite production, and the most harmonious color matching among all the costumes in China.

The basic styles of clothes are mostly imitated from Tang and Song dynasties. Adult women's clothing, with the change of people's family background and identity, has various forms, ordinary women's clothing is more simple.

Aoqun (袄裙), the dress form of upper Ao and lower skirt in the Ming Dynasty is totally different from that in Tang and Song Dynasty. Women in Ming Dynasty often add a short waist skirt to the skirt for activities.

There are many kinds of collars for upper Ao, including cross collar, square collar, and vertical collar. The color of the skirt is light at the beginning. Although there are patterns, they are not obvious. 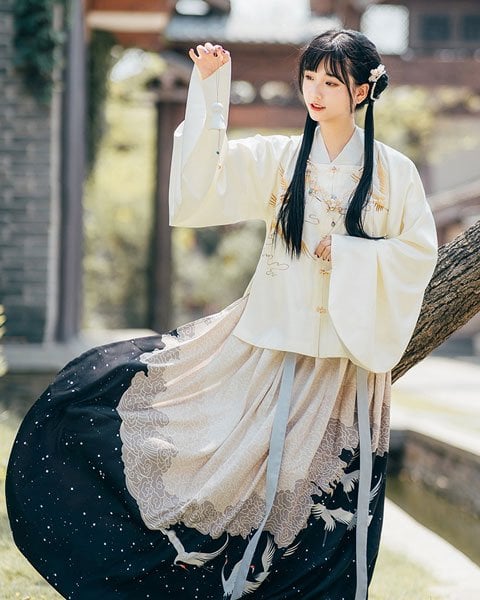 Pifeng in the Ming dynasty

Pifeng(披风, cape) is a popular dress in the Ming Dynasty. It can be worn by both men and women. It was developed from Beizi in the Song and Yuan Dynasties.

The shape of the Cape is Duijin, straight collar, open sleeves, two side vents on the body, the front and back of which are not connected, front decorated with a pair of lace for fastening, and the flower-shaped jade buttons are also used for fastening. 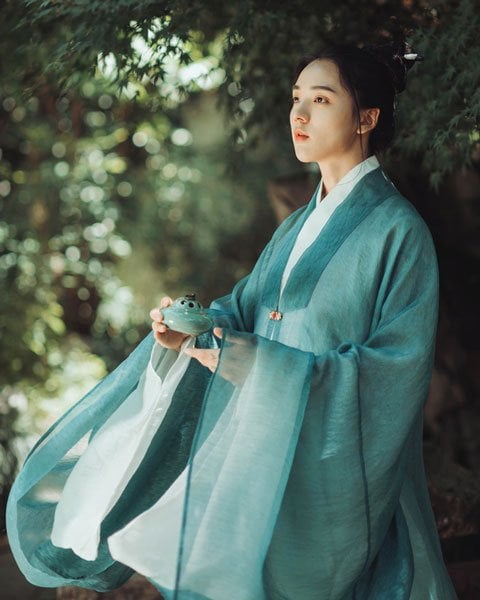 Bijia in the Ming dynasty

Bijia(比甲) is a kind of sleeveless and collarless vest with two sides open to the knee. Its style is longer than that of the later vest, generally to the hip or knee, some longer.

This kind of clothing was originally a kind of Chinese style Hanfu in the Song Dynasty, with no sleeve long top, also known as "vest". Later, it was introduced into Mongolia. 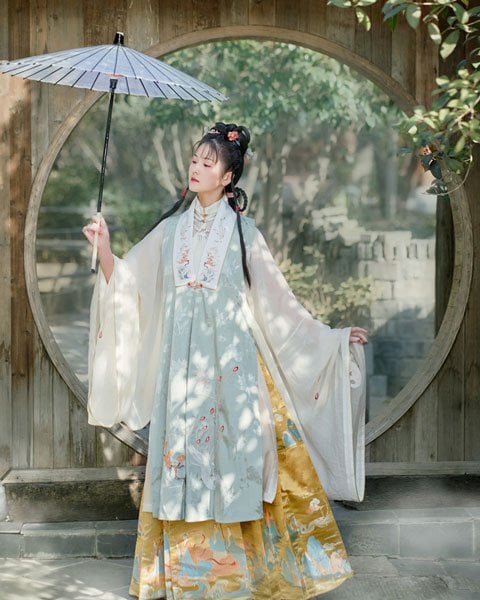 Fengguanxiapei (凤冠霞帔) refers to the dress of a wealthy woman when she was married in ancient times to show her glory. It also refers to the costumes of ancient noblewomen and women who were appointed by the imperial court.

In the Ming Dynasty, the queen and the wife of the rank officials could wear them. According to their status, they had different colors, patterns, decorations, and materials. In the Ming Dynasty, ordinary women could also wear a Fengguan Xiapei when they got married.

Fengguan (phoenix crown), because of the Phoenix embellishment and named. The Phoenix is the king of birds, so only the queen or princess is worthy of it. In fact, the phoenix crown of the Ming Dynasty was formed in Song Dynasty. It uses a gold wire net as the skeleton, which is covered with gauze, inlaid with gold and silver, and decorated with jewelry tassel. 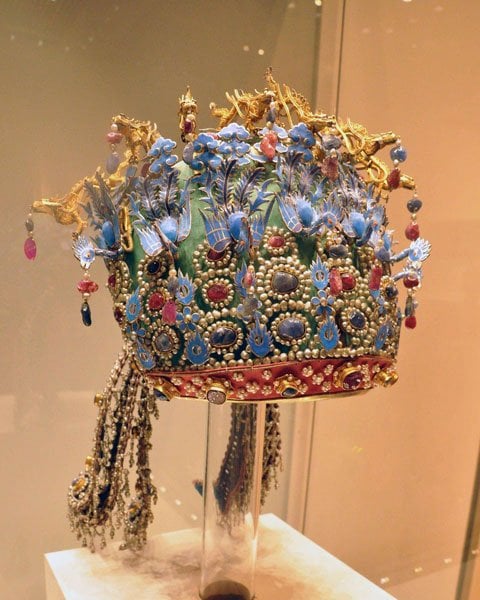 Xiapei, which matched with the phoenix crown, was actually Peizi in the northern and Southern Dynasties. Xiapei is a ribbon draped from the shoulder to the chest, made of brocade, with embroidered on it, triangular at both ends, and hung with a gold jade pendant below. 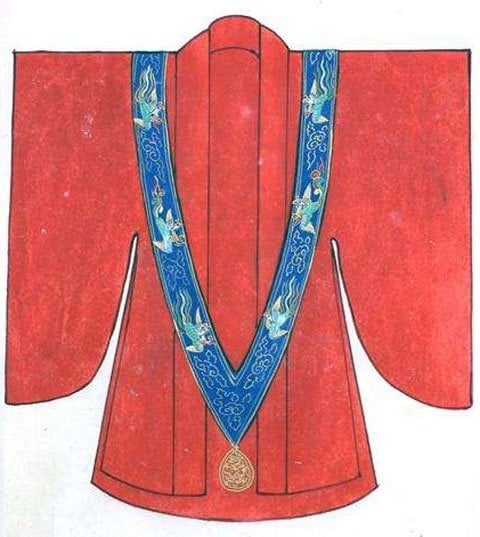 The dress of robes is very common in the Ming Dynasty. Most scholars wear a blue or black robe, also known as Zhiduo. This kind of robe is loose, and the length of the robe is generally to the foot, and it is a big sleeve, the sleeve is longer than the arm length, with wide edges around. More about robe history.

Mangfu (蟒服) is a kind of dignified Hanfu next to Dragon Robe, because its pattern is similar to the dragon pattern. Mangfu were first given to officials by the emperor in the Ming Dynasty.

Feiyufu (飞鱼服, flying fish suit) is a unique garment of the Ming Dynasty. It is decorated with a flying fish pattern(a pattern similar to a dragon), with the same pattern arrangement on the front and back. Flying fish was worn by the emperor as a symbol of glory, second only to Mangfu. 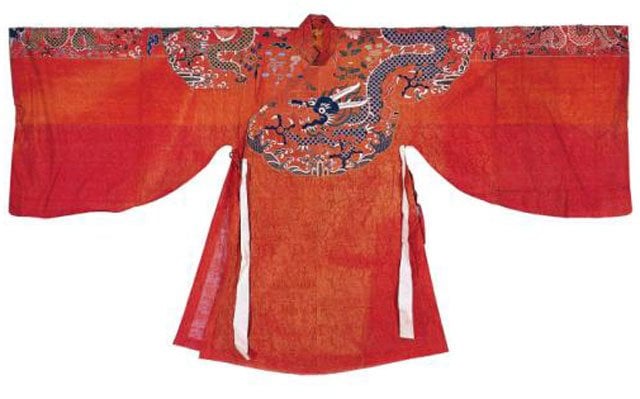 The influence of the Ming dynasty Hanfu

Meanwhile, the silk trade in Ming Dynasty not only spread all over the country, but also abroad. At that time, the main channels had been transferred from land to sea. The trading countries included Japan, Southeast Asia, West Asia, Europe, East Africa, and even South America.

It is in these business exchanges that cultures around the world can be exchanged and inventions and creations of all nationalities can be spread to each other, thus enriching the cultural connotation of all countries and further promoting the development of human civilization history.

Rose
Creative License: The article is the author original, udner (CC BY-NC-SA 4.0) Copyright License. Share & Quote this post or content, please Add Link to this Post URL in your page. Respect the original work is the best support for the creator, thank you!
Hanfu HistoryMing Dynasty
Related