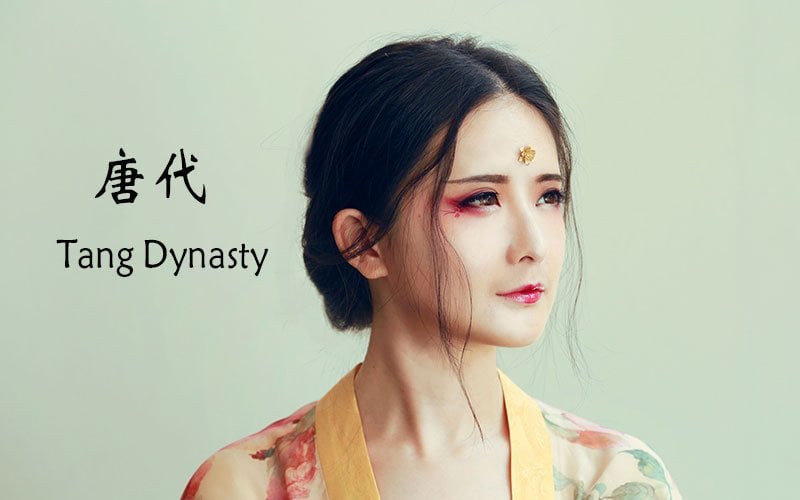 Since the Tang Dynasty, a large number of flower patterns have been widely used in craft decoration. Its composition is lively and free, dense and symmetrical, plump, and mellow. Especially after the combination of wavy continuous patterns and floral plants, it was the popular pattern in that period. 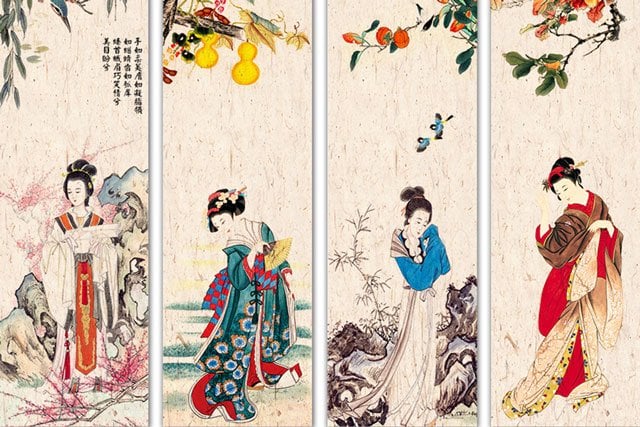 The style of the Tang Dynasty clothing has taken real flowers, grass, fish, and insects for sketching, instead of the previous creative idea of the "Mandate of Heaven." Still, the traditional mythical animals, like dragon and phoenix pattern, has not been excluded. At this time, the design of costume patterns tends to express the free, open mind and casual artistic style.

The Feature of Tang Dynasty Clothing

In the Tang Dynasty, foreign trade was developed, and the country was peaceful for a long time. Especially when the Tang Dynasty became the center of economic and cultural exchanges among Asian nations, it was the most glorious page in the history of Asian history.

This period absorbed Indian and Persian culture and integrated into Chinese culture. From murals, stone carvings, carvings, books, paintings, silk embroidery, terracotta figures and costumes, it fully reflected the cultural development and prosperity at that time.

In the Tang Dynasty, the clothing forms were more open and more gorgeous. Women's wear in Tang Dynasty is characterized by bright colors, very light even see-through materials, exquisite and flowing. Among women, there also has been a trendy fashion - bare chest and arms. 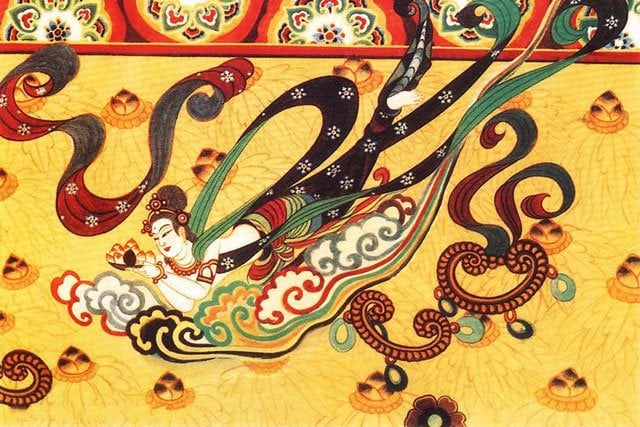 As we have known, the Dunhuang frescoes are very famous around the world. There are many images of Tang's women - high bun, open chest and red silk, yellow thin sleeve blouse, long green skirt, and red belt hanging on the waist. At that time, the low-cut dress was similar to the evening dress of the modern West, but it did not show back.

Tang Dynasty costumes are full of variety, with countless totems of mythical beasts and animals, as well as exquisite embroidery of flowers and trees. Besides these, people also like to sew the paintings of famous painters on their favorite clothes - a unique & luxury treasure. 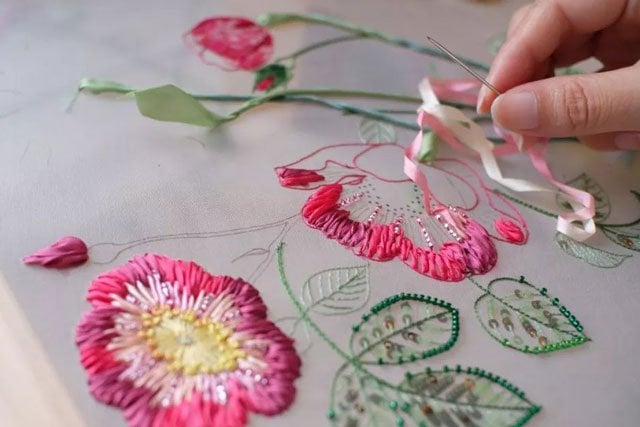 The costume pattern of the Tang Dynasty had a great influence on the garment design of the later dynasties, and it has continued to this day. Those patterns with good luck meanings are widely used in modern clothing, showing the new art form produced by the combination of traditional designs and modern aesthetics.

It was stipulated in the Tang Dynasty that the color of golden yellow became the exclusive color of the emperor and Royal family, and gradually evolved into a symbol of imperial power. Except for golden yellow, there is no taboo to use other colors. 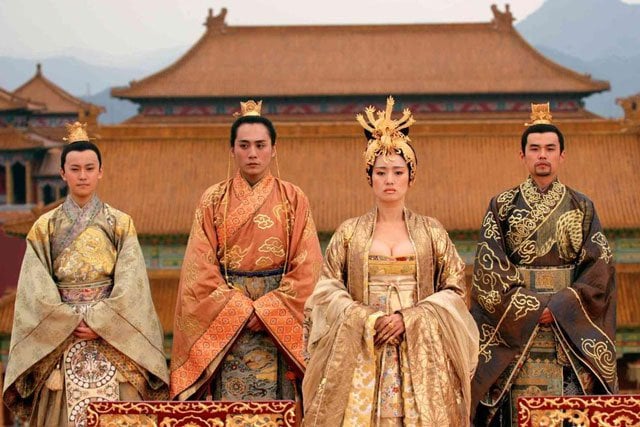 However, for the convenience of confirming the rank of the government officials, their uniforms will be made according to the colors of pure purple, red, cyan, and green.
In the folk, you will see a variety of color matching, dazzling your eyes. It's common to have more than five colors on a lady's dress. Of course, some people prefer solid colors, especially literati.

Cloth materials include silk, cotton, linen, wool, etc., and silk is the most commonly used due to it is light, soft, and comfortable to wear. And the textile technology of silk is very mature at that time. Experienced tailors can embroider any pattern you want. 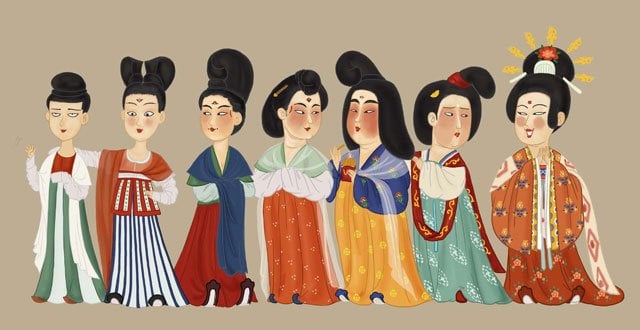 Qiu Mian (fete gown), a formal dress for men in the Tang Dynasty, is the most solemn one, which is the clothes for attending the sacrificial activities and various large-scale ethnic group meetings. However, because of its poor practicability, it's usually not worn in daily life. Just like today's wedding dress, except for the wedding ceremony, the rest of the time in the closet. 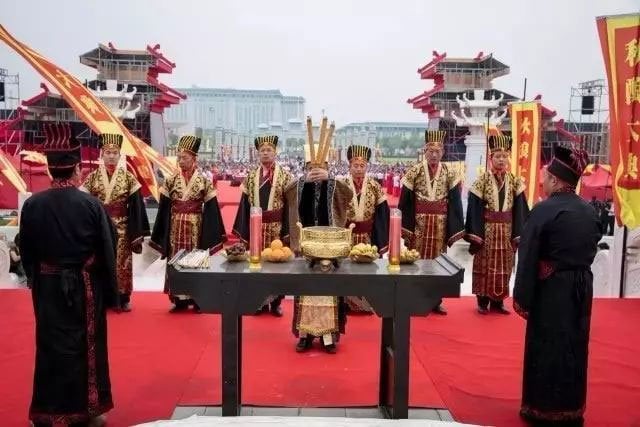 It expresses a kind of respect and awe for ancestors and nature. Although it is not a regular piece of clothing, it has been preserved and continued as an important tradition.

In fact, the Round-neck Robe was not invented in the Tang Dynasty. It was already worn as men's underwear in the early period of the Han Dynasty. After the improvement and development of the Tang Dynasty, lots of people quickly love this style, which is convenient to wear and very handsome.

Therefore, it soon spread to the whole country and become the most popular clothing style for males. How hot is it? From royal to civilian, everyone has at least one. And it was later confirmed as one of the official uniform's style. 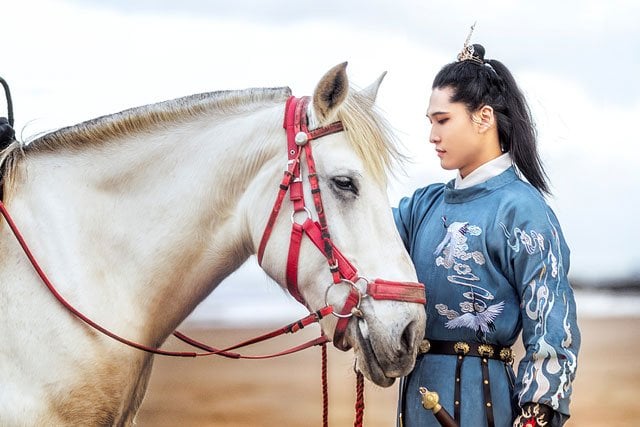 With the influence of foreign ethnic customs, Chinese women in Tang Dynasty were unparalleled freedom. In this unique era environment and social atmosphere, women's clothing in Tang Dynasty, with its numerous styles, gorgeous colors, innovative decorative techniques, elegant and beautiful, has become one of the important symbols of Tang culture. 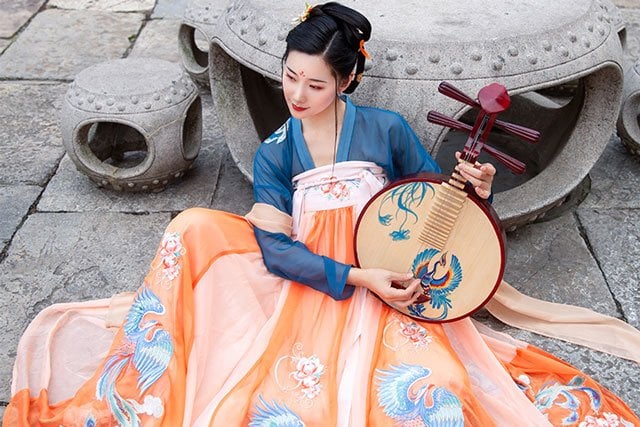 There is no doubt that the Chest ruqun hanfu is the most typical representation. Before the Tang Dynasty, ruqun's skirt was tied on the waist. It was very thick and conservative. Women's hands and feet could not be exposed outside their clothes.

Ruqun is one of the most popular styles of hanfu for women in ancient China. In the Tang Dynasty, Ruqun is gorgeous and sexy - women can show their arms and legs boldly. You can even see the whole beautiful body of a woman through the translucent silk material of ruqun.

Flat-fitting collar Banbi Hanfu, also known as U-shaped collar top. It is a short-sleeve shirt developed from Wei & Jin Dynasty. Banbi usually matches with a ruqun skirt. Due to the widespread popularity of Hu (nomadic minority groups, who live in the north of China) culture among Changan's elite classes in the Tang Dynasty, it became a fashion for women to wear Hu's small-sleeve style clothes. 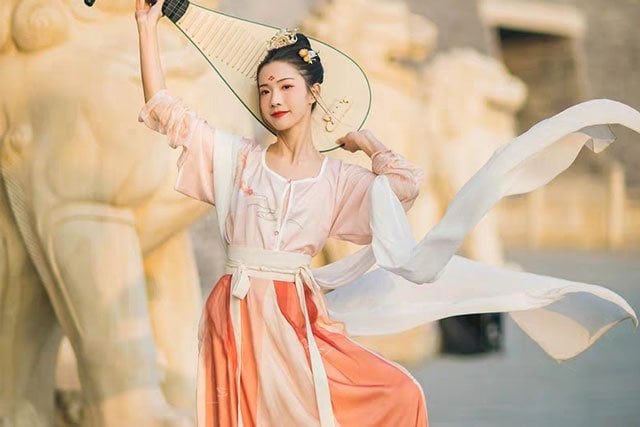 Because of the convenience of wearing, the set is like a combination of a modern T-shirt and skirt. Therefore, the Tang's women who often participated in the activities liked this more accessible style, especially in the music & dance troupe and the palace. At the same time, because they performed for the public, it was imitated many fashion girls and quickly became a trend.

How to Wear & Dress Up Tang Dynasty Clothes

Tang Dynasty is a country with a time-honored civilization and a land of ceremony and decorum. The ancient Chinese pay great attention to formality, politeness, wearing, and appearance. So it's not enough to wear a suitable outfit. You should also dress yourself up.

In ancient times, both men and women had long hair. And it is very impolite to with hair disheveled, so it was very important to choose the right hairstyle. Men's haircut was relatively simple, neat, and not messy. Women have a lot of exquisite hairstyles. It generally takes more than three hours for a woman to make a great hairstyle. 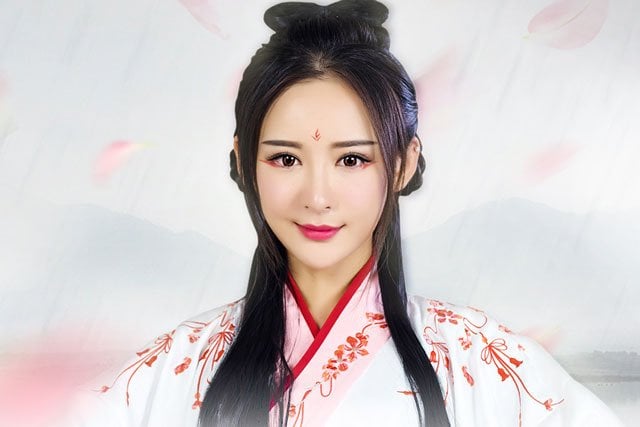 It's so hard to make a hairstyle, so people naturally need a hat to fix it and keep it clean. Of course, a pretty hat will make you look more handsome and beautiful.

In the Tang Dynasty, there already have many cosmetics for women to makeup, such as aluminum powder, rouge, applique, lipstick, etc. They can use only two or three of them to draw a light makeup or use all of them to draw a full make-up. 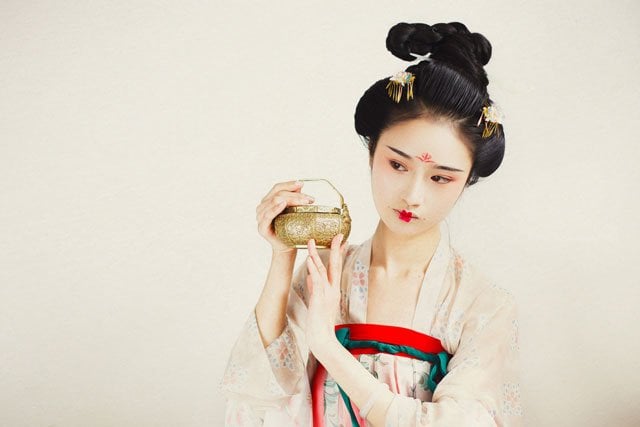 For example, there are many kinds of stickers patterns used in the middle of the eyebrow. It is a kind of forehead ornament, which is made of gold foil, paper, mica, and other materials to cut into various flower shapes, especially the plum blossom, which is most common and pasted between the eyebrows.

Besides, the dimple makeup is another kind of fashionable style for women, which is dyed with rouge on the dimples or pasted with gold foil like eyebrows makeup.

There are three main styles of shoes in the Tang Dynasty - flats shoes, boots, and clogs.

Women prefer flat shoes with beautiful embroidery. The materials are from cotton to linen & straw. The most critical part is the embroidery, it's handmade and full of the creator's heart. 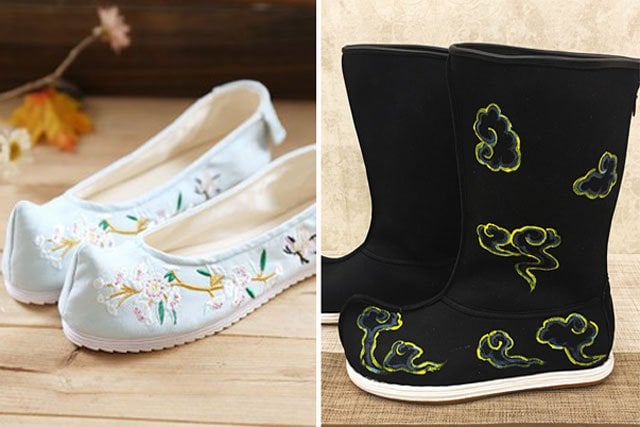 Most of the boots are made of brocade, with thick cotton soles and exquisite patterns. There are many similarities between Tang's boots and modern boots, indicating that the development of shoes at that time has reached a peak.

The Clogs are frequently worn indoor for causal, especially in summer.

In the appearance of shoes, with round head shoes were popular. And all kinds of shoes' artistry are exceptionally delicate, and even straw shoes are made with high technology.

It's worth mentioning that Yingluo was originally a kind of decoration on the neck of Buddha statues that spread into China from ancient India's Buddhism in the Tang Dynasty. 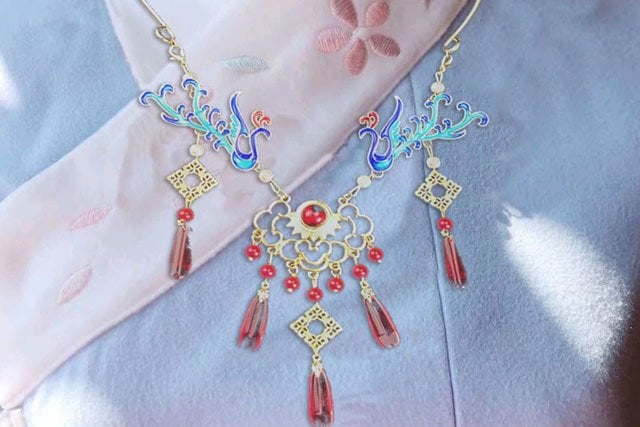 Yingluo's upper part is a half-round metal collar, and the lower part is a necklace composed of a jewel. Some of them hang a large lock shaped ornament, which is gorgeous and loved by palace maids and sing-song girls.

Other accessories, like folding paper fans, round silk fans, jade pendants, sachets, and embroidered bags, are a necessity for almost everyone and have become a part of people's life.

Tang Dynasty Clothing is the Representative of Chinese Culture

The Tang style costumes were not only brilliant in the splendid culture of that time but also had a tremendous impact on the life and culture of Chinese people later dynasties. And it has become a kind of unique form of ancient Chinese culture and art.

There were more than 300 countries that had friendly exchanges with the Tang government. Through them, splendid Chinese culture has spread all over the world. Up to now, some countries in East Asia still regard the Tang Dynasty clothing as a formal dress. 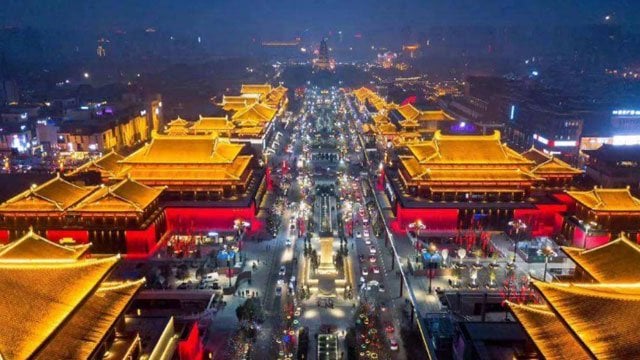 At the same time, lots of foreign-friendly envoys came to Chang'an City (now called Xi'an, the capital of the Tang Dynasty) and brought excellent cultures from all over the world to this eastern land.

A fantastic video about Tang Dynasty:

April
Creative License: The article is the author original, udner (CC BY-NC-SA 4.0) Copyright License. Share & Quote this post or content, please Add Link to this Post URL in your page. Respect the original work is the best support for the creator, thank you!
Tang Dynasty
Related