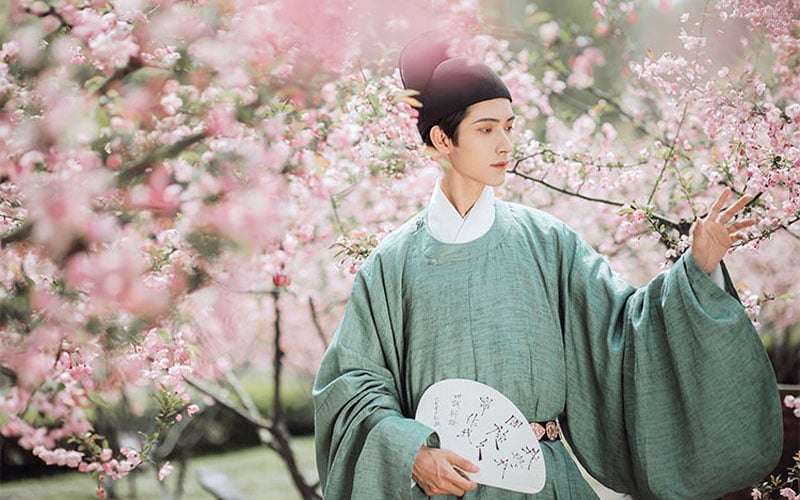 In recent years, Hanfu has received more and more attention. More and more Hanfu cultural festivals are being held in different cities in China, and worldwide, and thousands of Hanfu enthusiasts are participating in them.

The Beauty of Hanfu Is in the Heritage

So why is Hanfu so popular? In today's society, people have higher and higher requirements for aesthetics, and the special classical beauty of Hanfu attracts countless people to love it, and then to pay attention to it and understand it. So it is no wonder that Hanfu is so popular. And the beauty of Hanfu is not just on the surface, but in the thousands of years of traditional etiquette and civilization of the Chinese nation that it carries.

Today we bring you some of the Hanfu collections from "Yi Guan Da Cheng-Ming Dynasty Costume Culture Exhibition", these collections come from the Shandong Museum and Confucius Museum, most of them are Ming Dynasty clothing, which is not only beautifully made and complete sets, but also very significant for costume research. I hope you can also learn something from these collections.

Based on the previous dynasty, the Ming Dynasty covered different classes, genders and official titles, and gave the Chinese Hanfu costume a more standardized and rigorous ritual system. For the sake of understanding, perhaps we can divide the costumes of the Ming Dynasty into three parts: the Guan Fu(冠服, crown costumes), which represented the culture of "ritual"; the Ji Fu (吉服), which were used for various auspicious occasions such as seasons and festivals; and the daily costumes, which emphasized more on the practicality and comfort of the costumes. 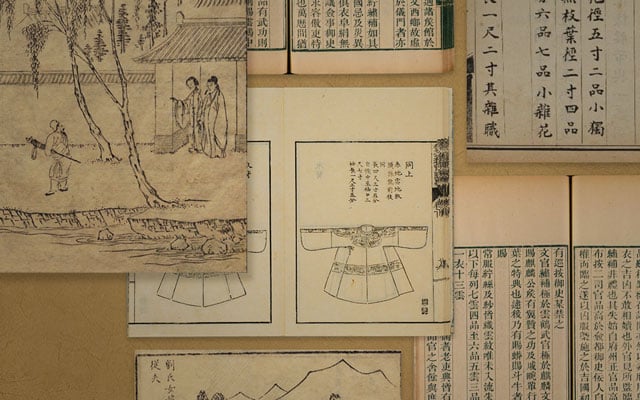 In the long history, etiquette and costume have always been integrated with each other. In ancient China, the continuous revision of the ritual system and the continuous improvement of the aesthetics of the costume are a good reflection of this. As early as the Zhou Dynasty, a complete "Li Yue system (礼乐制度)" was established, and there were corresponding ritual provisions in the costumes, in the following dynasties, the inheritance of Han clothing was a national event, and the Ming Dynasty was no exception.

The Hanfu of the Ming Dynasty was "inherited from the Zhou and Han dynasties and taken from the Tang and Song dynasties". It was a complete system from clothing to etiquette. The style was so beautiful, the manners were so many, and the rules were so complete that it was astonishing. After the Ming Emperor Zhu Yuanzhang ascended to the throne, it took about 30 years to develop an orderly and elaborate clothing system.

"Hongwu three years (1370): the provisions of the common people, farmers, merchants shall not use yellow, clothing shall not use Luo and other senior fabrics."

"Hongwu five years (1372): the mother or wife of civil and military officials, wear the Dayi, Xiapei. If the civilian women wearing, with plain dyed rough, no embroidery."

The Chaofu is a kind of Guan Fu of high rank and status, which is applied to the more solemn ceremonial occasions. The Chaofu was set in the Han Dynasty and has been followed for generations. The Ming dynasty Chaofu inherited the system of the Tang and Song dynasties, but the grade division is more strict and fine, with a hierarchy of seven levels, so as to specify the dress code among the nine levels of officials. 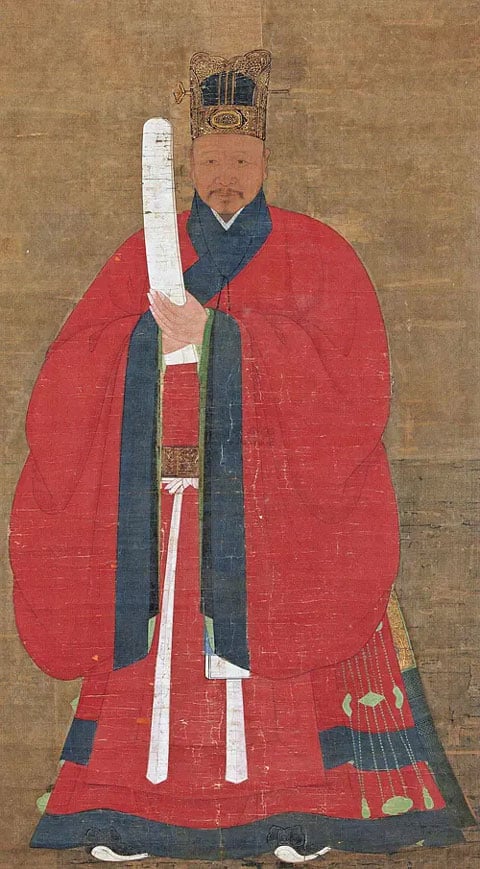 Regardless of civil and military officials in the Ming dynasty, they all wore Liang Guan, Chiluo Yi (red robe), Chiluo Chang (red skirt), and white gauze Zhongdan (中单), etc. The Shandong Museum has the most complete collection of Ming dynasty Chaofu in existence, which is the only identifiable object in the 1,800-year history of Chaofu.

This collection is called "Liang Guan", also called Jinxian Guan, and is from the Chaofu of the Yan Sheng Gong (衍圣公) in the Ming Dynasty. 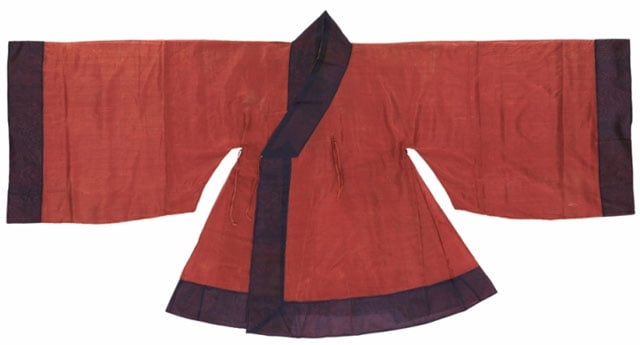 This collection is the Ming dynasty Yan Sheng Gong's Chaofu upper outer garment, the overall texture of the yarn, the color scheme is extremely solemn. The entire body is red, with a four-inch wide green gauze border sewn around the collar, lapels, sleeves, and hem. 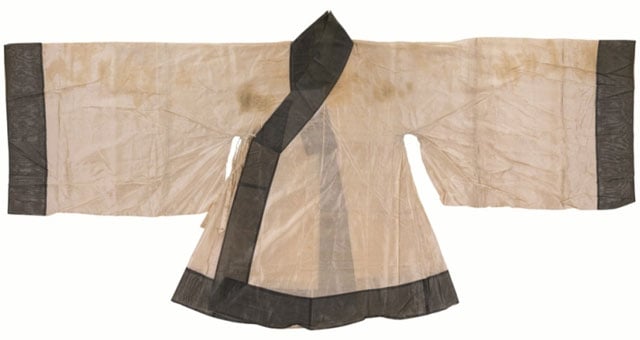 This collection is white gauze Zhongdan, a single garment worn within the Chaofu. 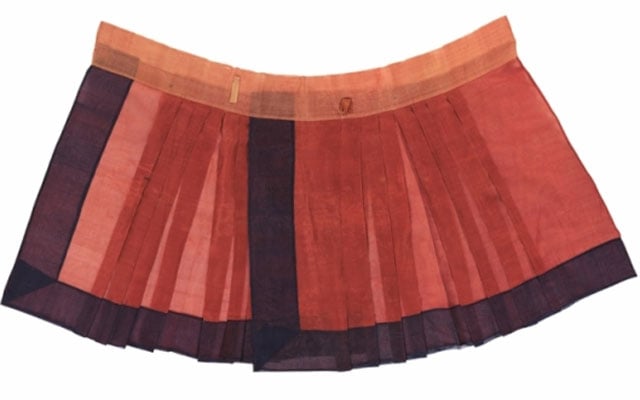 This is the lower garment of the Chaofu, which is of the same texture as the upper garment. 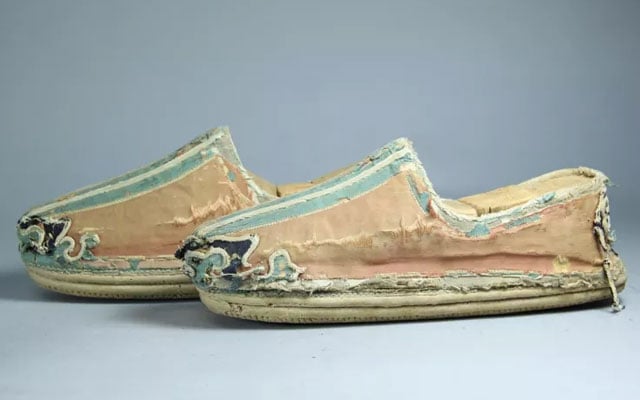 Yuntou Lü (云头履, cloud head shoes), the toe of the shoe is in the shape of a cloud-headed and Ruyi. Since the Ming Dynasty, they were mostly worn by officials and scholars, so they were also commonly called "Chao boots" and "Chao shoes".

The Ming Dynasty stipulated that civil and military officials wore Gongfu when attending the morning court every day. The Ming Dynasty Gongfu follows the Song and Yuan forms, including the Futou, round collar robe, distinguish the grade according to the robe color and material. 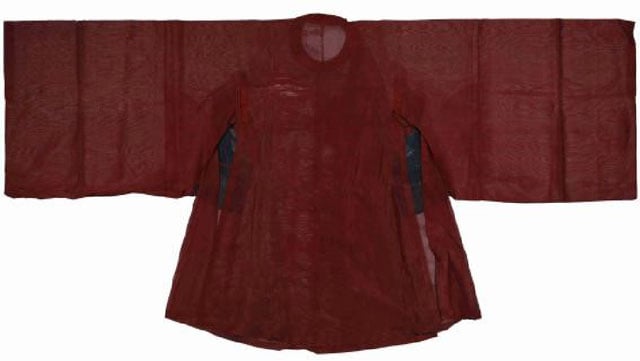 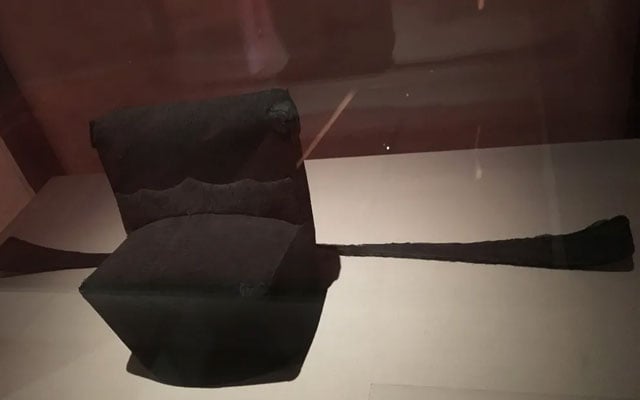 The Futou was popular among people from all social strata because it was convenient to wear and rich in variations, and it was the Changfu of the officials and common people.

In the Ming Dynasty, civil and military officials wore Changfu when they met the emperor and had their daily offices, including Wuzha hats, round collar robes, Dahu (褡护), Tieli, Gedai (leather belts), boots, and so on.

In the Ming Dynasty, the Changfu was decorated with square "colorful embroidery patterns" at the front chest and back of the clothes, with flying birds for civil officials and beasts for military officials, and these "patterns" are what we know as "Buzi (补子)". The application of "Buzi" was an important symbol of the development of the official uniform system in the Ming Dynasty, which was inherited from the previous dynasty and also influenced the Qing Dynasty. 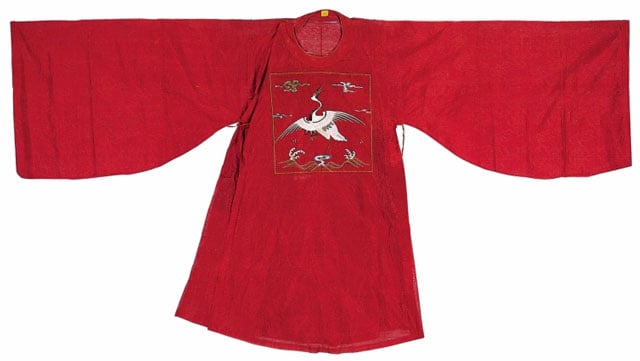 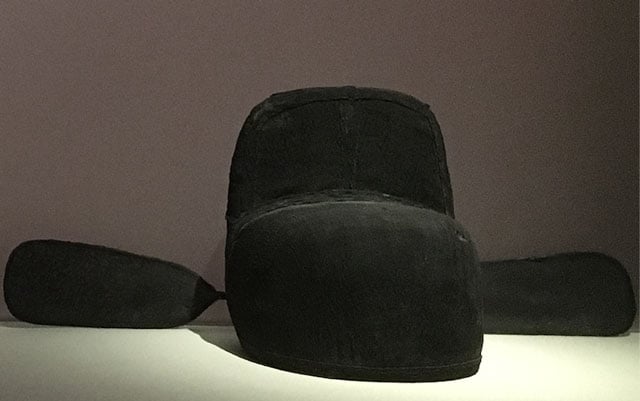 This is the most familiar Wusha Mao, which is the symbol of the highly marked Ming Dynasty official uniform. It is the last kind of hat style that evolved from Futou since the Northern Zhou Dynasty and after the Tang, Song and Yuan Dynasties.

Mingfu (命妇) refers to a woman who has the honorary title. Mingfu Costume divided into the formal dress and Changfu two kinds. Formal dress used for the court to see the emperor and empress, participate in rituals and another big ceremony, including Di Guan (翟冠), Da Shan (大衫), Xiapei (霞帔), etc. Other ceremonial occasions are wearing Changfu, with each color round collar robe, round collar robe embellished with Buzi, pattern with its husband or its son rank. 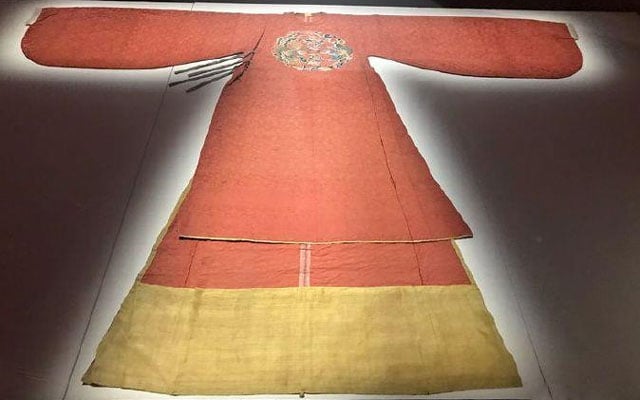 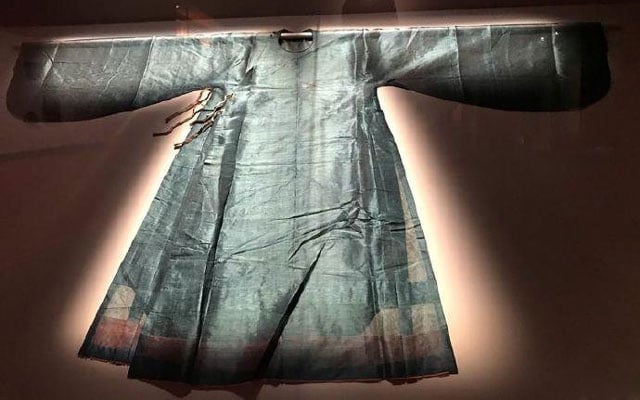 In the Ming Dynasty, the Ji Fu has not been included in the clothing system, but in various kinds of literature has been repeatedly mentioned, more for festivals, birthday, feast, wedding, and other auspicious occasions. There are many different styles of Ji Fu, such as round collar robe, Zhishen, Taoist robe, Yisan, Tieli, Aoqun, etc.; the colors are bright, mostly with big red and other festive colors; the ornaments are complicated, often using auspicious patterns or scenic themes, with deep cultural meaning; the craftsmanship is exquisite, using a lot of Zhuanghua, gold weaving, embroidery and other techniques, achieving a perfect combination of technology and art.

Style1: decorated on the Yunjian, sleeve, and knee 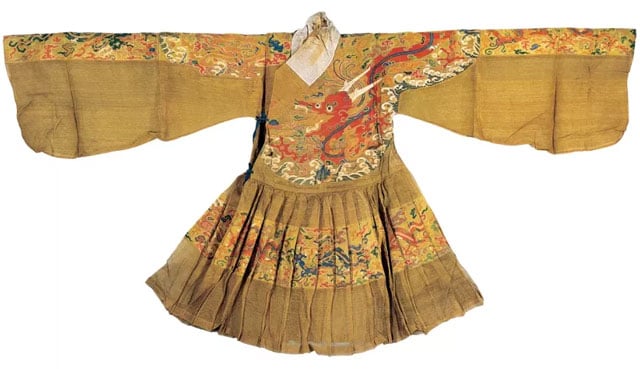 In many movies and TV works, you can often see the Ming imperial guards wearing the Feiyufu and holding the Xiuchundao (embroidered spring sword), and their majestic appearance. This collection is a true heirloom "Feiyufu". 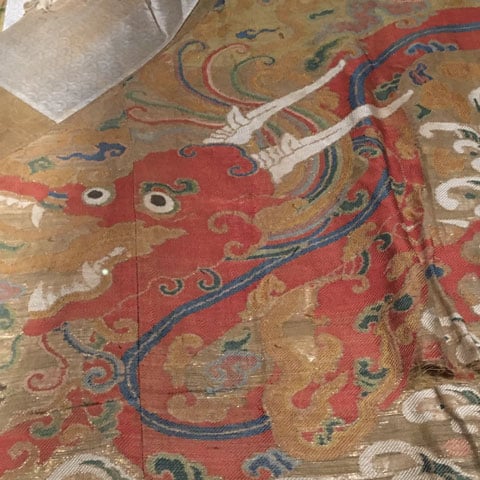 The Feiyu refers to the pattern of "dragon head, two feet (four claws), two wings, a pair of ventral fins without hind limbs, and a tail of fishtail that rolls to both sides" on the costume, which was an auspicious pattern commonly pursued at that time. 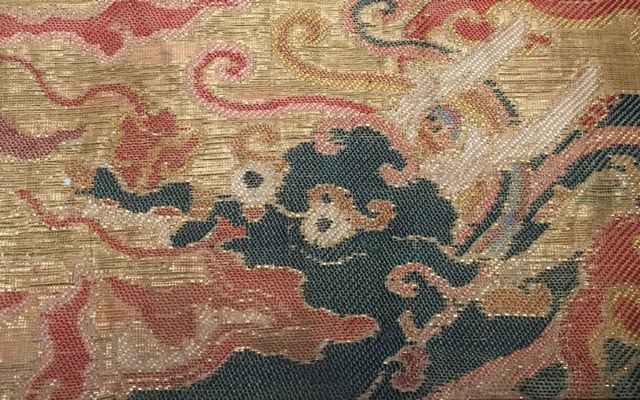 Gold thread hooked edge, red, white, black, green, yellow, and other velvet silk for the pattern of the weft. Although there are many colors, but as much as possible to show the noble and not cluttered, it can be seen that the aesthetic level of the time is high. 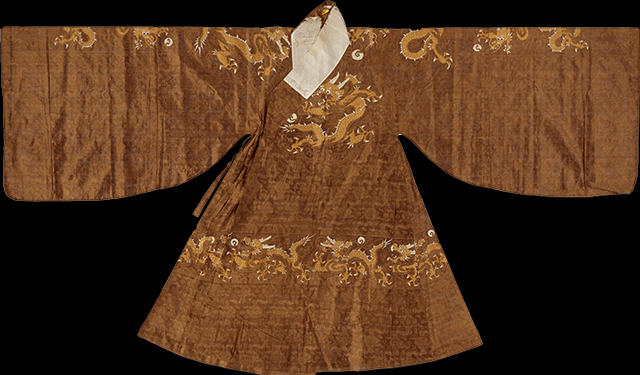 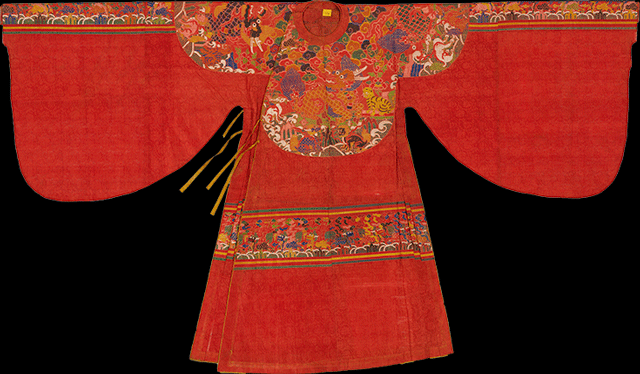 Red unicorn pattern Zhuanghua women's robe - Ming Dynasty   (Zhuanghua: 妆花, is a colorful thread such as silk and cotton thread woven into the fabric to form a pattern in a wide variety of colors) 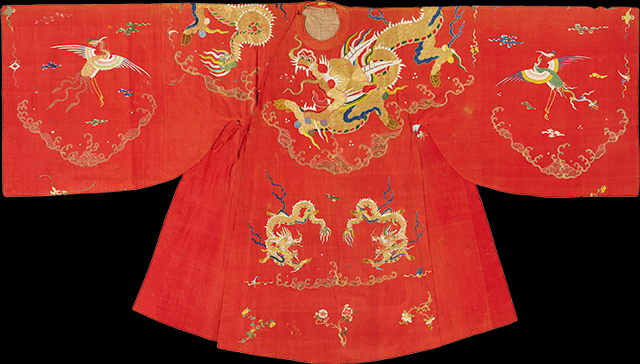 The Ao may have a Buzi or be decorated with Yunjian/Xiulan, the style is long or short, the collar style has a cross collar, round collar, vertical collar, square collar; the skirt is mainly a Mamian Qun, decorated with Qunlan (裙襕).

In addition to various ceremonial occasions, is a very rich style of daily clothes, such clothing downplayed the identity and other differences, the pursuit of popular fashion.

This is a typical Mamian Qun. Mamian Qun originated in the Song Dynasty as a skirt designed to facilitate women riding donkeys, and later evolved to become the most popular style in the Ming and Qing Dynasties. There are four skirt doors in the Mamian Qun, two in the front and two in the back, and overlapping each other, pleated on the side, the middle skirt door overlapping to make the light surface, commonly known as "Mamian". 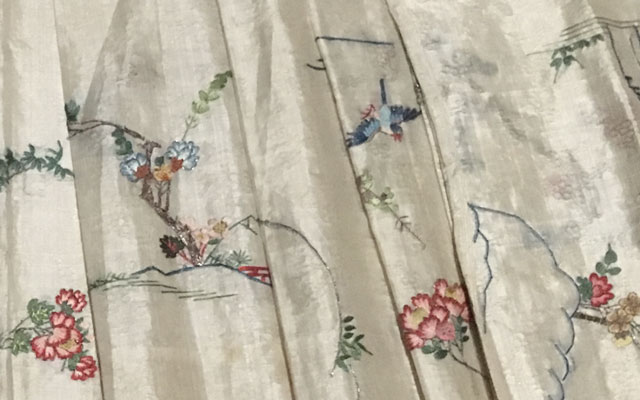 The flowers and birds embroidered on the skirt are lifelike, delicate, and elegant, and many Hanfu merchants have made restored models of this collection. 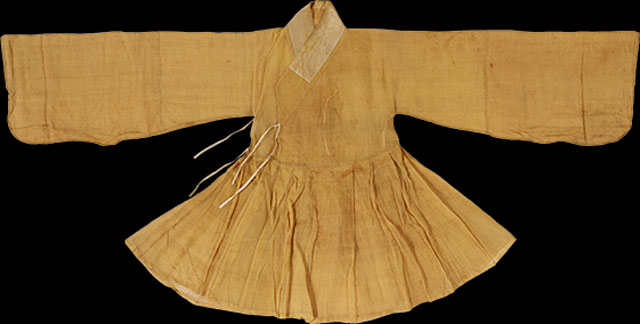 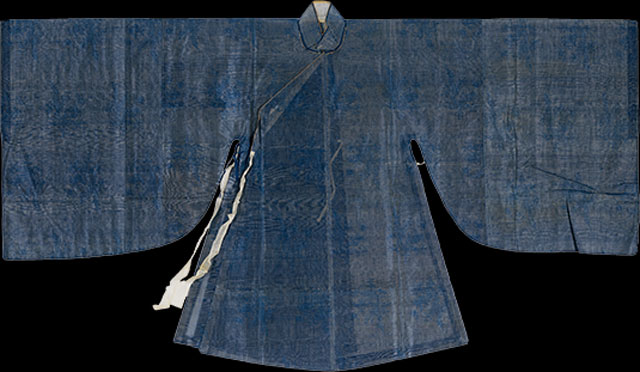 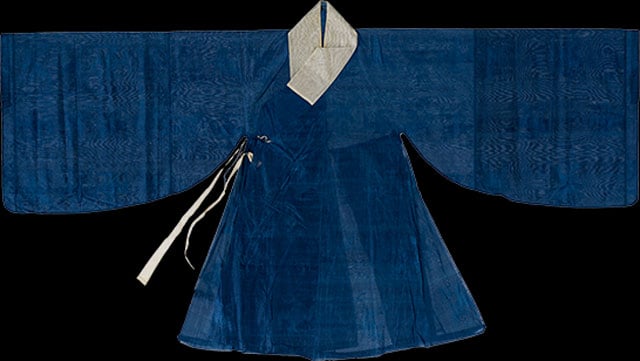 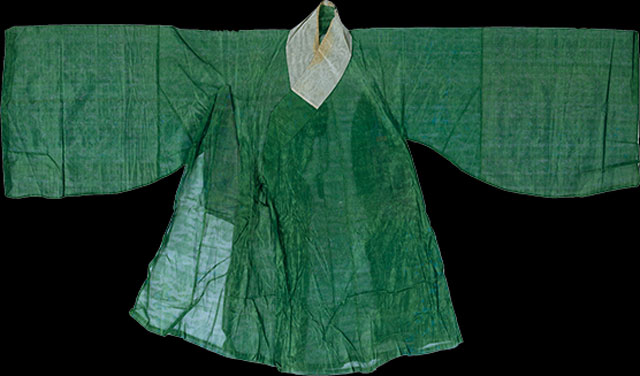 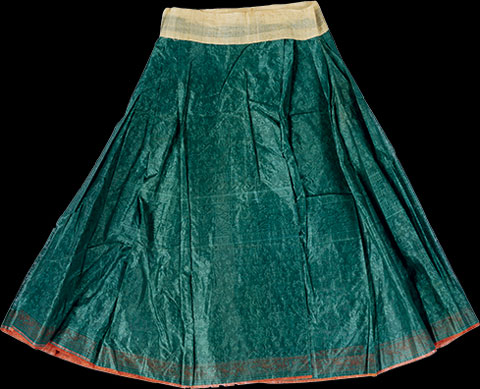 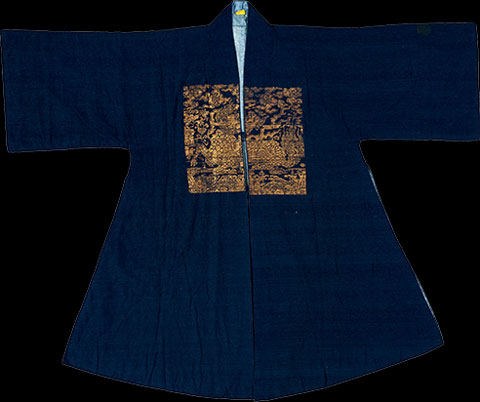 The above is the sharing of Ming Dynasty clothing, we hope that while you enjoy the traditional Chinese costume, you can also understand that the meaning of the Hanfu is that it contains the rich connotation of Chinese civilization and the continuation of "etiquette", which is always developing and improving. Many people may start to learn about Hanfu because they look good, but it would be more meaningful to learn about the culture and etiquette behind the costumes!

Men’s Clothing Changes During the Ming and Qing Dynasties

Eddie
Creative License: The article is the author original, udner (CC BY-NC-SA 4.0) Copyright License. Share & Quote this post or content, please Add Link to this Post URL in your page. Respect the original work is the best support for the creator, thank you!
Ming Dynasty
Related