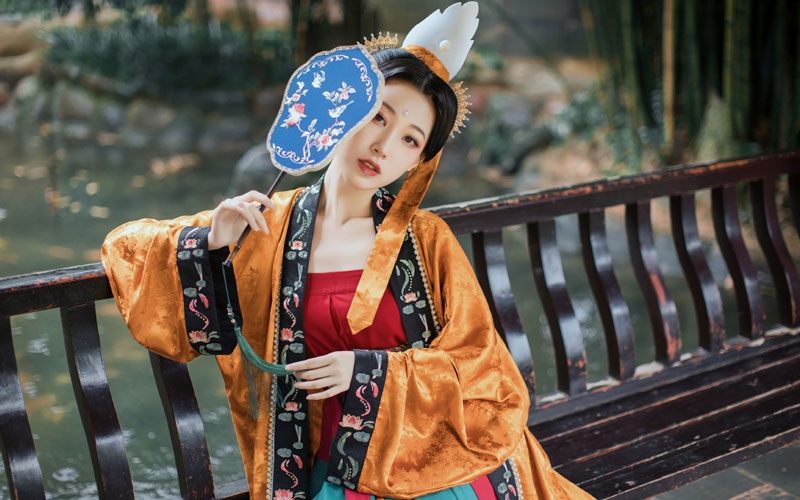 Unlike the noble and elegant clothes of women in the Tang Dynasty, when it comes to Song Dynasty women costumes, maybe we are thinking of a graceful and restrained and a plain and neat feeling.

The Song Dynasty was the dynasty with the most prosperous literati temperament in Chinese history. Women’s clothing in the Song Dynasty not only inherited the women's clothing system in the Tang Dynasty, moreover, combined with the characteristics of the times, created a dressing mode that belongs to the Song Dynasty.

Its aesthetic standard is skinny beauty with fresh and elegant. It advocates slenderness and fit, exquisite material processing, soft tone, lightness, softness, elegance, and it has a strong atmosphere of life.

So what kind of clothes did the women wear in the Song Dynasty thousands of years ago? In this article, ArtMoment will introduce 11 classic Song Dynasty women costumes to you.

In the Song Dynasty, women’s clothing was basically still coat and dress shape, divided into different forms. Tops mainly have Moxiong, Shan, Ru & Ao, Pao, Beizi, Banxiu, and so on.

Moxiong (抹胸, bandeau) is the most close-fitting clothing for women in the Song Dynasty. Its function is like today’s underwear, which is used to cover and protect the chest. 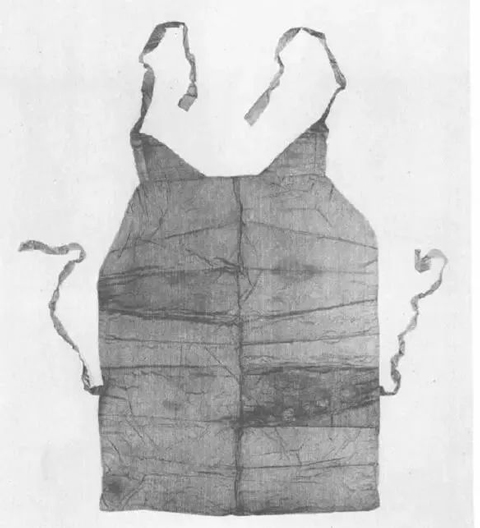 However, Moxiong formed a unique form of top wear in the Song Dynasty. That is to wear a long bandeau inside, and then wear a Beizi outside. The clothes are open without buttons. In this way, the Moxiong, which was originally underwear, also became part of the outerwear. This kind of dress style fully shows the female curves and its boldness. It can be seen that not all the women in the Song Dynasty were conservative. 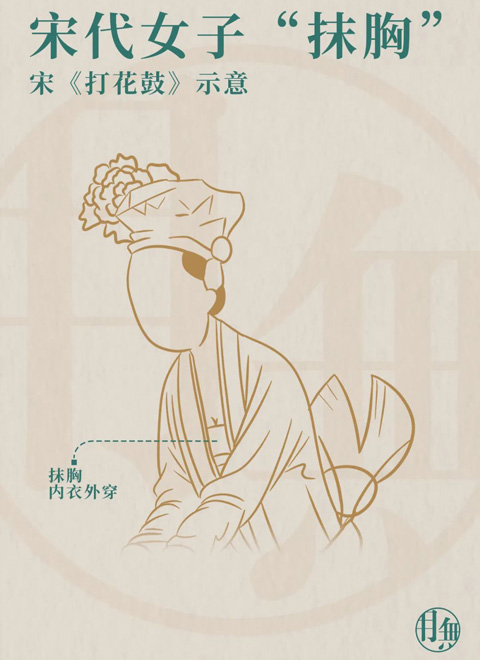 The Daxiushan (大袖衫, big-sleeved shirt) of the Song Dynasty is the clothing left over from the late Tang and five dynasties and it was still popular in the Song Dynasty. Its sleeves are so wide and big that they touch the knees. Therefore, it is called Big Sleeve. 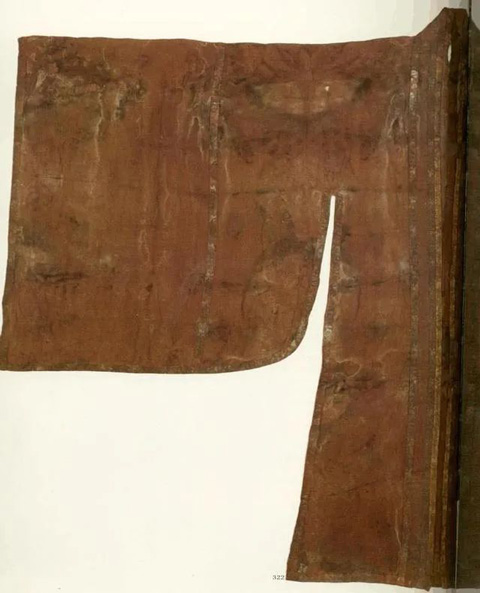 The Daxiushan used to be the daily clothing style worn by the emperor’s concubines. Later, it gradually spread to the folk, and noble women competed to imitate and became the dresses of higher-class women.

Song Dynasty Daxiushan belongs to grand dress for Song Dynasty women, which are generally used on important or specific occasions such as weddings, investiture, and so on. And when wearing big-sleeved shirts, they often need to be accompanied by exquisite jewelry and makeup, including hair accessories, facial accessories, earrings, necklaces, and chest wear. 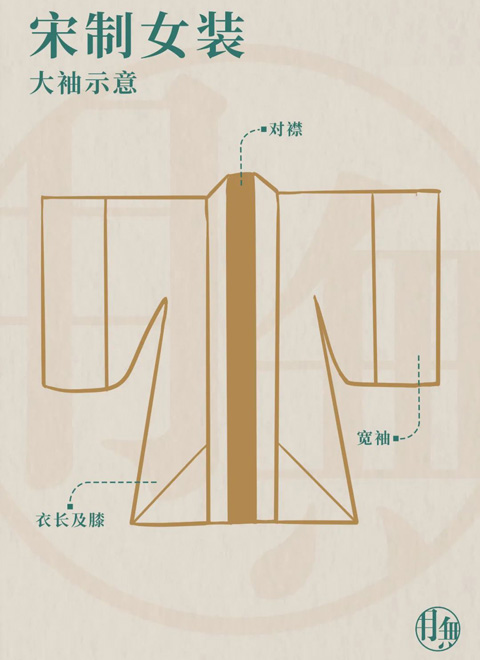 The basic style of Song’s Daxiushan is the opposite shirt, wide sleeves, and knee length. The collar and lapel are inlaid with lace, and there is a triangular pocket behind the clothes, which is used for store the Xiapei.

Ru and Ao, the two are similar, are both short tops.

The length of Ru is generally up to the waist. When wearing it, the lower part of the body is often matched with a long skirt. The top is tied inside the long skirt, and the belt is tied outside. Therefore, it is often known as “top Ru and lower Qun”, which is also one of the daily costumes of women in the Song Dynasty. 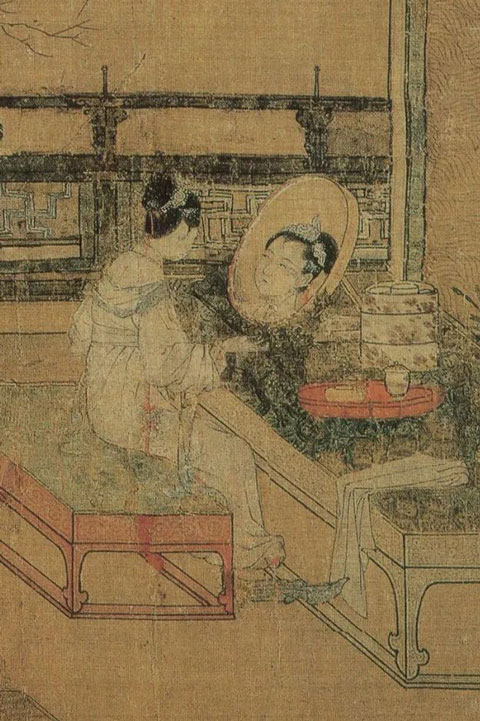 The Ao evolved on the basis of the Ru. It is longer than Ru and shorter than Shan. The style is basically the same as the Ru. The difference is that the cotton and wool will be added to Ao for the keep warm feature. Ao is mostly worn in autumn and winter. The Ao with inner lining is called “Jiaao (夹袄)”, and with cotton wool is called “Mianao (棉袄)”.

The Ru and Ao are relatively short, and the waist and cuffs are looser than that of the previous dynasties. The colors are mostly low-purity green, pink, and silver gray. The edges are generally embroidered or stitched. The Ru and Ao are the daily clothing of women in the Song Dynasty. 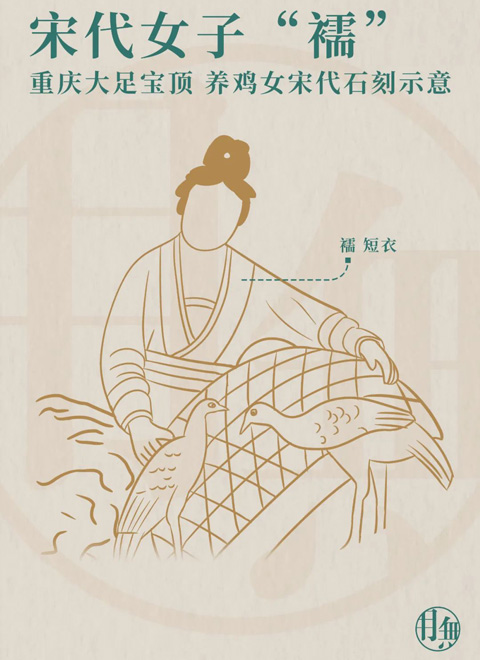 Pao (袍, robe) were originally worn by men, but they could be worn by both men and women in the Song Dynasty. Its shape is long clothing, with a round-neck and narrow-sleeved robe, the top and skirt are connected, and the belt is tied around the waist. 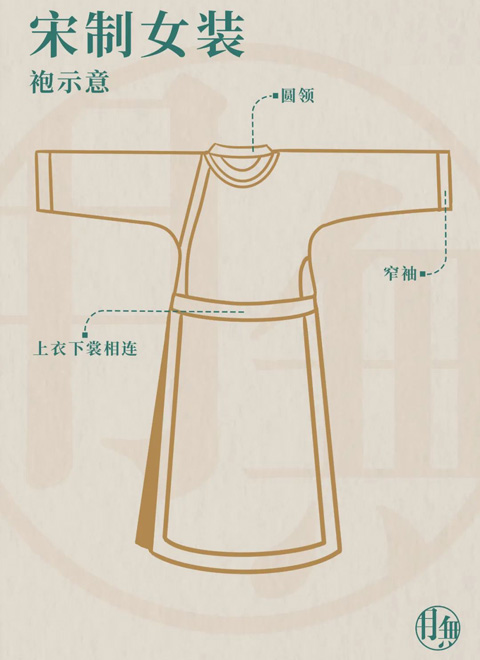 The maids in this kind of men’s clothing can often be seen in Song paintings, and there are also many inner court maids and singers in such men’s clothing in the palace. This kind of clothing is simple, and it is obviously more convenient to wear at work. 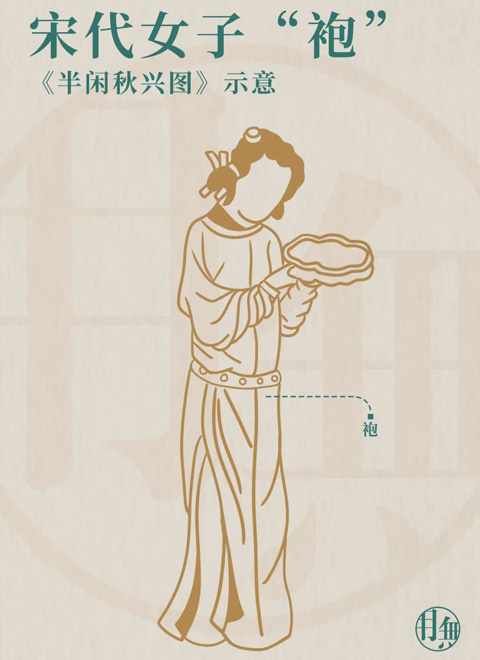 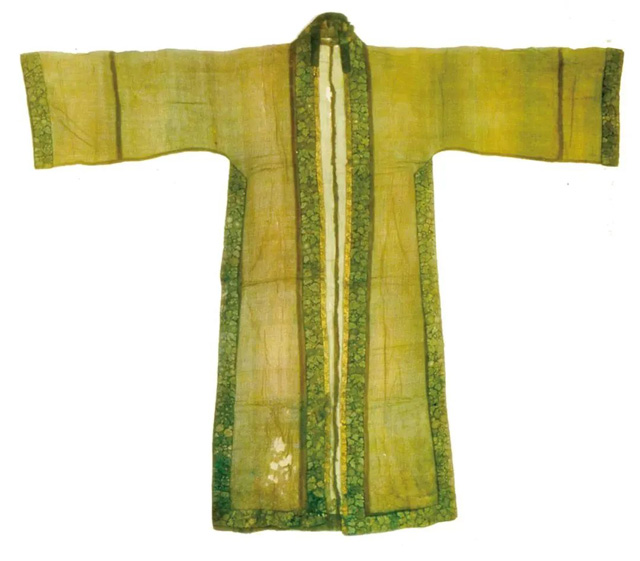 There is a saying about the origin of the name of the Beizi: people in the Song Dynasty believed that the Beizi was originally a dress worn by maidservants. However, because the maidservant often stands behind the housewife, so it is called “Beizi”.

Because the Beizi slit top is very convenient to walk, so at first, it was often used as a maidservant’s clothing, but later it was gradually adopted by the nobles, and gradually developed into a regular costume. All strata of society in the Song Dynasty, from the empress and noble concubine to the maid, all loved to wear Beizi, and often matched with long skirts, pants.

The shape of the Beizi is generally straight collar, the front lapel is often open without buttons. There are two styles of sleeves: wide and narrow. High slits on both sides straight under the armpits. Collars, cuffs,  and lapels are usually decorated with edge ornaments. 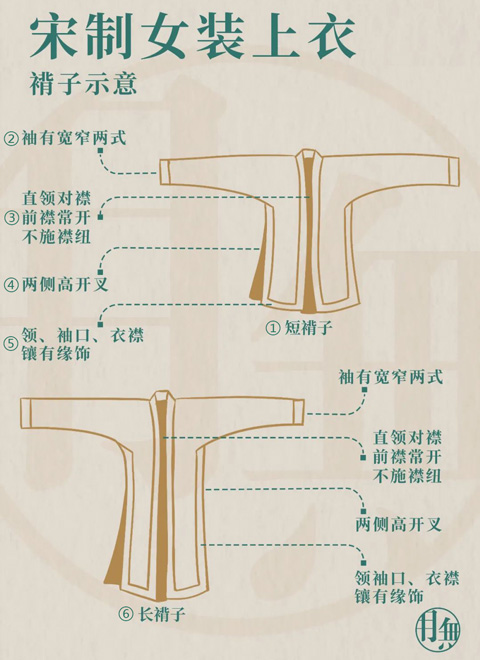 The popularity of Beizi is not only because of its comfortable and appropriate wearing, but also inseparable from the aesthetics of the Song Dynasty. When a woman put on Beizi, her whole body would look thinner, which was in line with the literati atmosphere prevailing in the Song Dynasty. Fresh and refined, elegant and generous with casual is the most characteristic and representative feature in Song Dynasty women costumes. 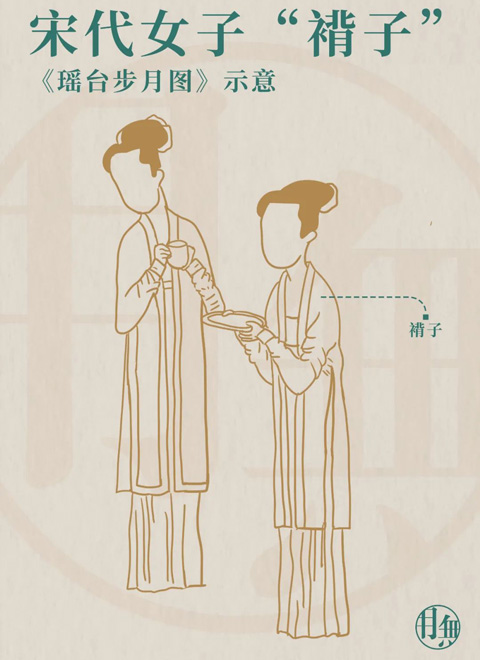 Banxiu (半袖, including Banbi and Beixin), that is, half-sleeved top, is a kind of clothing pattern handed down from the Sui and Tang Dynasties, developed from the Ru. Most of the Banxiu are coil collars and straight collars, decorated with patterns, and the shape is elegant and beautiful. 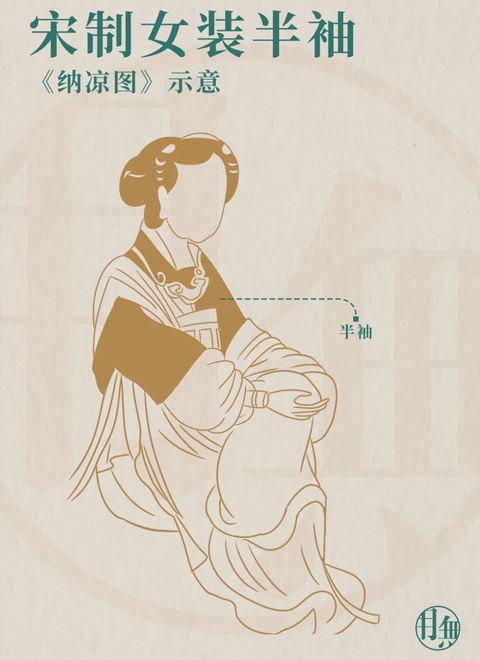 If remove the sleeve of Banbi, it will become the Beixin. In the past, the ancients often wore it in the inner layer to keep warm. Later, they gradually wore it outside and were also used to match clothes. There were long and short styles, and the production process was gradually exquisite. 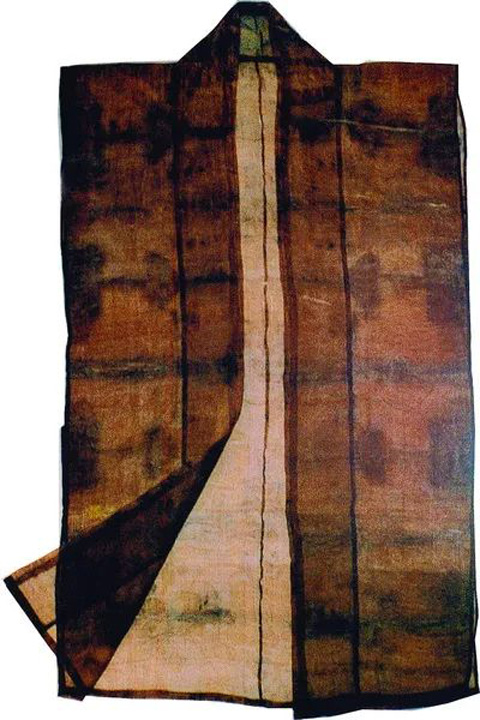 Song Dynasty women loved to wear skirts, and most of the skirts in the Song Dynasty were made of Luo material. The skirt in Song Dynasty has more skirt pleat, so it is not only more three-dimensional and beautiful but also shows skinny and slim. The folds were open and close with the fluctuation of the gait, full of aesthetics. 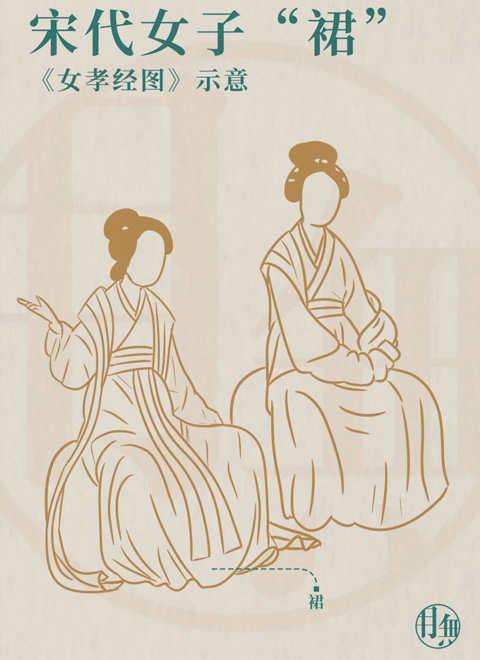 Song skirts are not only colorful but also have many kinds of skirts, including pleated skirts, Yipian skirts, Liangpian skirts, and Xuan skirts. In the production process, there are embroidery, halo dyeing, and even the tulip vanilla dyeing skirt to make the skirt have the color and fragrance of tulips.

The Ku (trousers) that first appeared in ancient times can be traced back to the trousers only worn on the calves. It only has the length of the calf, used to keep warm. Because it is tied to the shin with a rope, it is also known as the“Jingyi (胫衣)”

Later, due to the influence of ethnic minorities and other reasons, it was gradually lengthened into trousers. The trousers with an open crotch are called “Ku (袴)”, and the sealing of the crotch (closed crotch) is called “Kun (裈)” 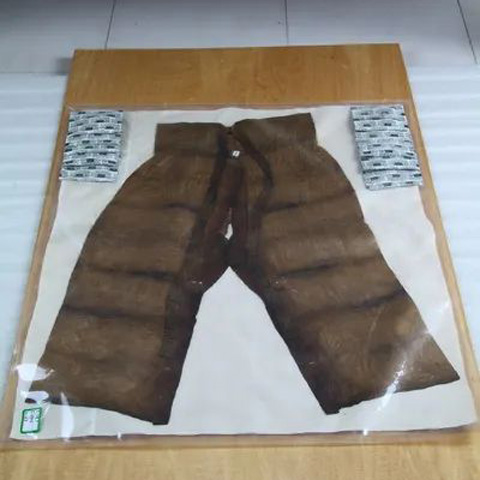 In the Song Dynasty, due to the popularity of chairs, stools, and other furniture, people’s sitting posture also changed from sitting on the floor to hanging feet, and the change of sitting posture was even more urgent for complete crotch trousers. Therefore, in addition to the “Ku” used to keeping warm, the “Kun” of crotch sealing is also more used.

For Song Dynasty women, trousers were mainly worn in the inner layer. The order of wearing them is Weijian (围件), crotch trousers, open crotch trousers, and skirts from the outside. Among them, the Weijian and crotch trousers are worn close to the body, and they are regarded as “underwear”. 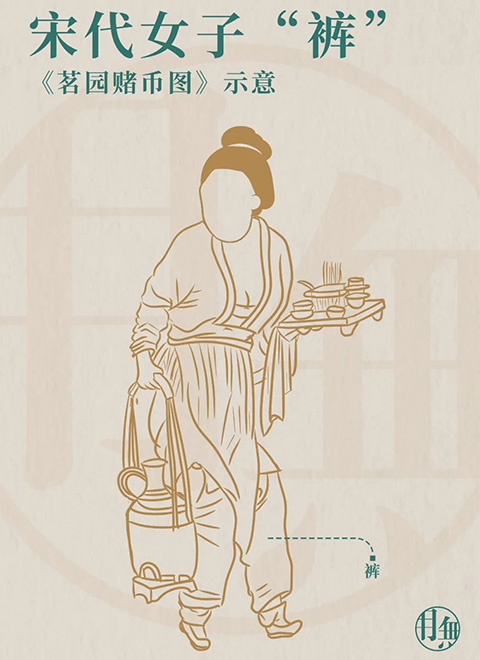 Although trousers have become relatively popular in the Song Dynasty, in the understanding of traditional Central Plains culture, it is impolite for trousers to be exposed directly. Therefore, generally speaking, the trousers of women in the Song Dynasty are not exposed. Only low-identities of actors and workers will wear short jackets and expose their trousers.

Ancient women’s long silk scarves wrapped around their shoulders and arms were called Pibo (披帛). At first, it was mostly worn by concubines, singers, and dancers. When walking, the ends of the Pibo will flutter with the wind, which was charming, and added to the elegant beauty of women, so it gradually popular among folk women. 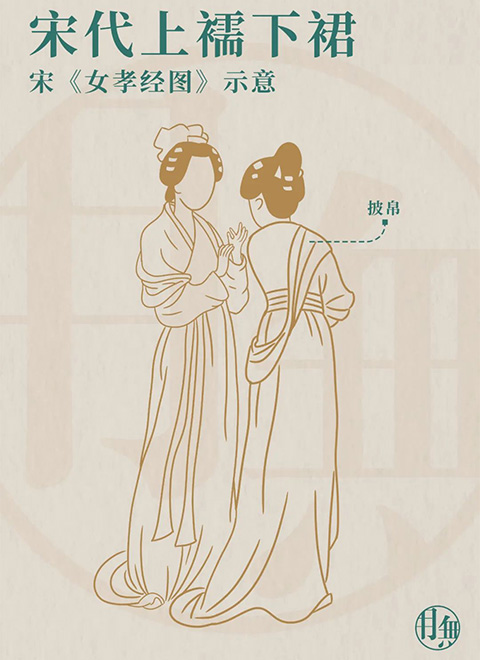 On the basis of Pibo, the Song Dynasty developed a new form - Xiapei (霞帔). 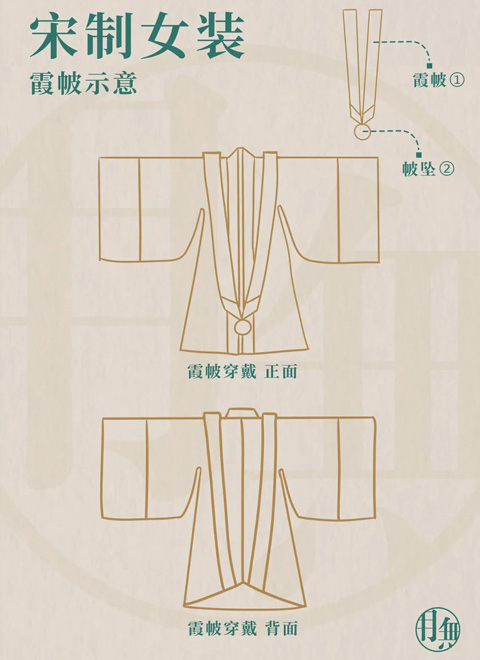 Xiapei is a symbol of identity, and it is also part of the women's grand dress of the ancient Han nationality in China.

Those who wear the Xiapei must be women with the Mingfu status (women who were granted the title in ancient times, usually the mother and wife of the official), and civilian women must not use it privately.

The style of Xiapei is narrow and long, embroidered with patterns. When worn, it is wrapped around the back to the chest. At the lower end of the front, it is tied with a Peizhui (帔坠) made of gold or jade to fix it. 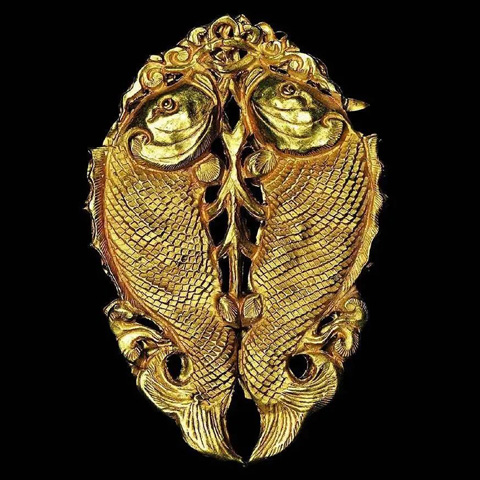 The Weiyao (围腰) is also one of the unique accessories for women in the Song Dynasty. Because women at that time usually tied their waists, they would wear a square towel around their waists for beauty.

Square towels can play a connecting role between the upper and lower clothes, increase the beauty of details, and play a certain decorative role. In the Song Dynasty, the Weiyao was mostly yellow. 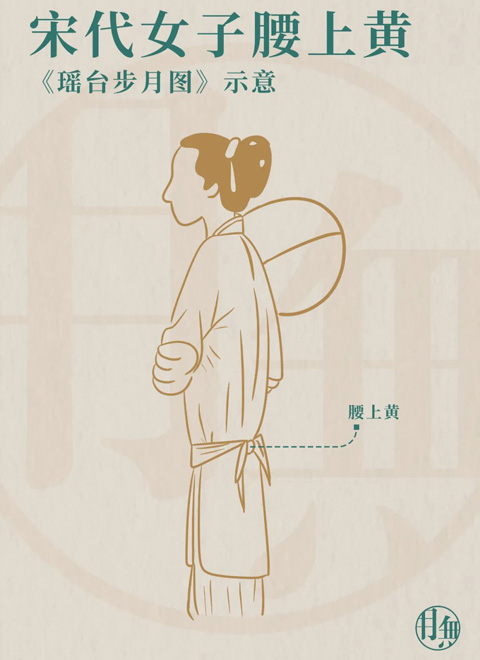 The above is the introduction of 11 classic Song Dynasty costumes. For thousands of years, Hanfu has carried not only aesthetics of life, but also a continuation of the lifestyle of countless Chinese people. The beauty of Chinese culture has penetrated into all aspects of life. Food, clothing, housing, and transportation have all shown the world the traditional oriental aesthetics for thousands of years, passing through thousands of years without defeat. The genes of beauty have been quietly buried in the hearts of each of us. 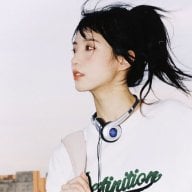