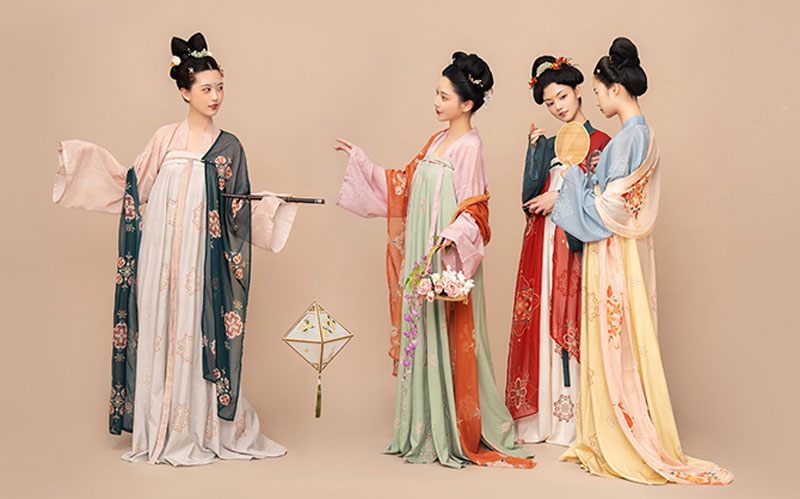 In terms of the cultural and economic development of Chinese feudal society, the Tang Dynasty was undoubtedly an apogee in the development of human civilization.

The Tang government not only opened its country to the outside world, allowing foreigners to enter for business or study, but even allowed them to participate in the selection examinations for government officials.

It was tolerant, and often appreciative of religions, art and culture of the outside world. Chang'an, the Tang capital, became the center of exchanges between different cultures.

It deserves special mention that women of the Tang dynasty did not have to obey traditional dress codes, but were allowed to wear clothing that exposed their arms and chest, or dress with exotic elements.

They could also wear riding clothes if they wanted to and enjoyed the freedom to choose their marriage and to divorce.

The abundance of materials and a relatively relaxed social environment gave the Tang dynasty an unprecedented opportunity to develop culture, reaching new heights in such fields as poetry, painting, music and dance. 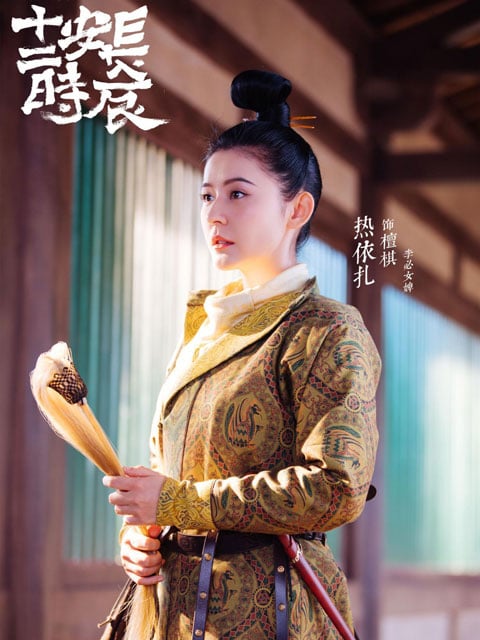 Based on the development of the textile industry in the Sui Dynasty, and progress achieved in reeling and dyeing, the variety, quality and quantity of textile materials reached an unprecedented altitude, meanwhile, style diversity was the trend of the time.

The most striking clothing of that period was women's clothing, complemented by elaborate hairstyles, ornaments and facial make-up. Tang women took great pains to match their clothes, each set a unique image in itself.

They ceased to dress on a whim, but rather demonstrated to the full the beauty of their attire, in accordance with their social conditions. Each set of clothing had its own character, along with a deep cultural content. In general, Tang women's clothing can be classified into three categories:

Style and color of Tang costume

Zhang Xuan, a Tang dynasty painter, and Zhou Fang, another famous painter, were good at portraying opulent women in elaborate clothing. Zhou Fang, in his painting "Woman with a Flower in Her Hair", portrayed a beauty with a long gown slightly covering her breasts. Realistically, the painter depicted the refined and transparent texture of the clothes while revealing the tender shoulders and soft arms of the protagonist of his painting.

Woman with a Flower in Her Hair

Tang's aesthetic is one of opulence and extravagance, such as peony, men with narrow shoulders and women with short necks, horses with small heads, thick necks and large backs. In the paintings, women tried to show their opulence by pleating their skirts in the shape of the accordion. They raised their waist upward to below the armpit, so that it has a barrel shape, thus showing the outline of a round body.

Descriptions of Tang costume are seen in many poems, both of its style and color. A great variety of colors is seen in the poems, because there was no official decree as to what color was or was not appropriate. All that counted was personal preference, whether it was dark red, apricot yellow, dark violet, ultramarine, grass green, or tupiran gold.

In the season when pomegranate trees bloomed, each family bought the flowers to dye their daughters' clothes. The golden tupiran skirt was also dyed by the color of plants, The skirt had the beauty of both the tupiran color and the fragrance that lingered there.

A feather skirt dressed on a Tang Dynasty princess was woven from the feather of a hundred birds. An outstanding piece in Chinese textile history, the skirt had varying colors in day and night, under the sun and under night light, obverse and reverse. In addition, bird images are seen on all parts of the skirt.

Female Ruqun was not limited to upper and lower clothing. The dress had many matching accessories and ornaments with it, including a short-sleeved shirt called Banbi or half-arm, dressed outside the long-sleeved vest, different from what we do now in the summer. It was named half arm because the length of the sleeves was roughly between the vest and the long sleeve. It served as a vest.

Tang women liked to wear Pizi, or Pibo as an alternative, a long piece of silk put on the arms. And the cloak is seen on many clay statuettes unearthed from Tang tombs.

There is an episode about the imperial concubine Yang Yuhuan, who, at a royal banquet, had her cloak blown and carried up to someone's hat, we can konw that the cloak should be very light and thin, although we cannot rule out the possibility that there were heavier woolen cloaks, worn in the winter to protect the body from the cold wind.

The Pibo, on the other hand, is longer and narrower. Draped over the shoulder from back to front, it is what we generally call a "ribbon" - a beautiful piece somewhat forgotten in classic Chinese paintings. 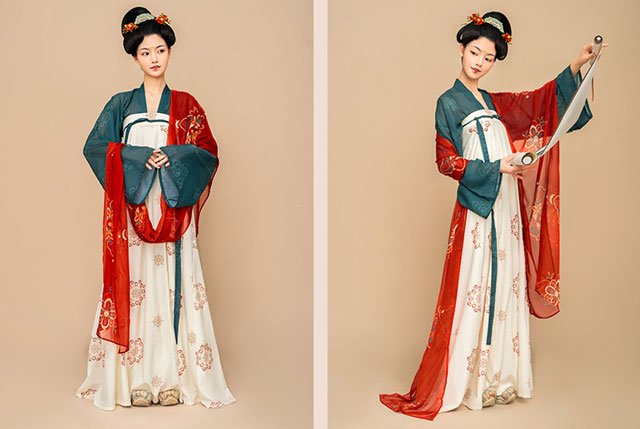 Footwear to match Ruqun includes brocade shoes with a "phoenix head" on the toe, and shoes made of linen or plant stem, all very light and delicate. In addition to the images in classical paintings, we can see actual pieces unearthed in Xinjiang and other places.

Variety of hairstyle and makeup

When wearing the Ruqun, Tang women rarely wore hats. Sometimes they wore decorative flower crowns, but when going out, they usually covered their face with a veil (Mili & Weimao). This kind of veiled hat became a trend in the early years of the Tang dynasty, while in the middle years, many were annoyed to wear it. 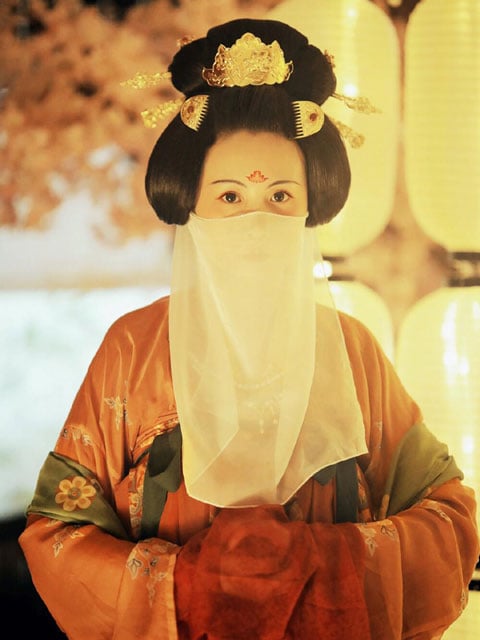 They opted to leave their chignon exposed when going out riding. There was a great variety of hairstyles at that time, all striving to be opulent and extravagant, including more than 30 models: high bun, spiral bun, reverse bun, triangular bun, double-bun, and down bun. Most of these buns acquired their names from their shape. Some of these hairstyles were derived from ethnic minority groups. 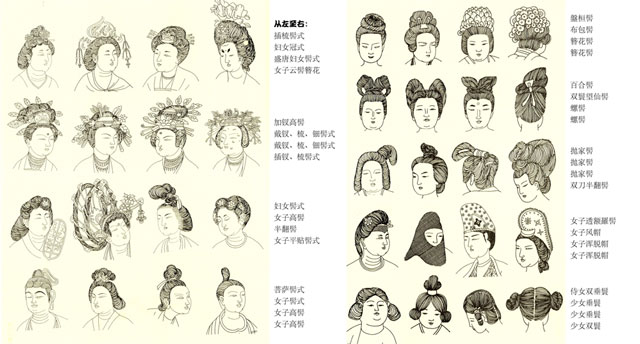 Numerous ornamental objects were used in the buns, including gold hairpins, jade ornaments, and fresh or silk flowers. All of these are often seen in Tang paintings, and in artifacts unearthed from ancient tombs as well.

Although facial makeup was not invented by Tang women, it took on a luxurious, extravagant, and variable character in their hands.

They did not merely powder their faces, darken their eyebrows, color their cheeks or use lipstick, but also decorated their foreheads with yellow crescent, which was said to be in imitation of the minority ethnic groups of the northwest. Eyebrows were painted in different patterns.

Ordinary people also had their own trend of eyebrow patterns. In addition, they put decorative designs between the eyebrows as a finishing touch, made of feather, shell, fish bone, pure gold, or just painted. At the tip of the eyebrow there is a "slanted red".

The lips were painted according to the most popular model of the time, completed by an artificial red dimple a centimeter away on two sides of the lip. In the most prosperous times of the Tang dynasty, these dimples even reached the two sides of the nose, in the shapes of coins, peaches, birds and flowers. We can see this kind of dimples in the Dunhuang Five Dynasties Grottoes. 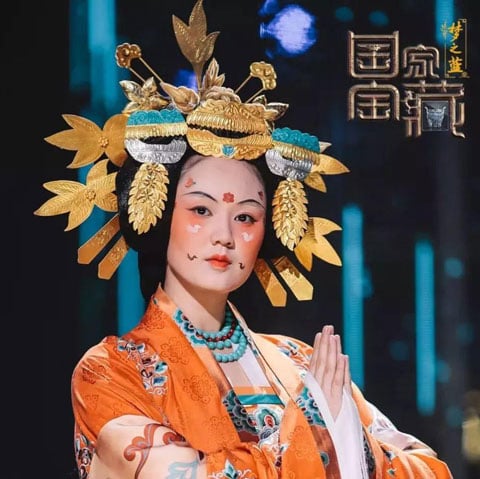 The facial makeup styles were not the invention of the Tang Dynasty, but had their roots in the previous dynasties.

For example, Huadian or forehead decoration is said to have originated in the Southern Dynasty. When Princess Shouyang was strolling in the palace on an early spring day, a breeze brought a plum blossom on her forehead, which, for unknown reason, could neither be washed nor removed.

Fortunately, it turned out very beautiful. Immediately, it became a popular makeup among girls. That is why they called it "Shouyang makeup" or "Plum Blossom makeup". This makeup was well received for a long time by women of the Tang and Song dynasties.

As for "Tilted Red", they say that Cao Pi (187-226), Weiwen Emperor of the Warring Kingdoms period, had a favorite concubine named Xue Yelai. One night, when Cao Pi was reading, Xue Yelai came to attend him, but through carelessness he bumped into the screen and drew blood on his forehead.

After healing, she still had a scar, but she was still the emperor's favorite. All the girls at court tried to imitate him, painting two symmetrical red marks on both sides of her face. This type of make-up was initially called "Dawn Make-up", because of its color resembling the pink color of dawn. Later it was called "Slanting Red".

When Tang women eventually realized that there was no more room left on their face for makeup, they immediately changed their style. According to the New Tang Book, after the mid-Tang Dynasty, the trend was to put neither powder nor rouge on the face. 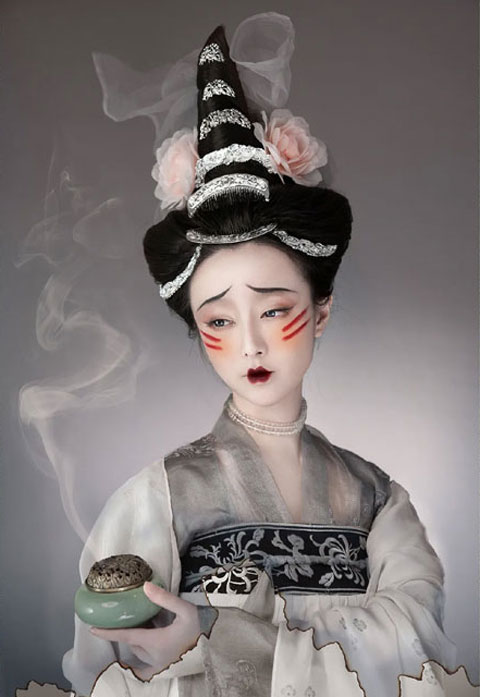 The great poet Bai Juyi writes in his poem Time Makeup: "Time Makeup, Time Makeup, Time Makeup, comes from the city and spreads everywhere. No rouge on the cheek, no powder on the complexion. The lips are like mud, with gray pomade. The eyebrows are painted downward. The makeup looks like a weeping face." The only makeup left was black lipstick. It was called "weeping makeup".

The popularity of women dressing up as men

Compared to the showy dress of Ruqun, a complete set of the men's riding attire dressed on women had its only taste. Typical Tang men's dress included Futou or turban, round-necked jacket and toga, belt and black leather shoes.

A woman, when so dressed, would have a sharp, free but elegant appearance. Although according to Confucian teaching, "men and women could never transvert," women in men's clothing are frequently seen in Tang paintings, such as Drawing of Menina with Fan and Drawing of Lady on Spring Journey, both by Zhang Xuan and in Dunhuang Grottoes. 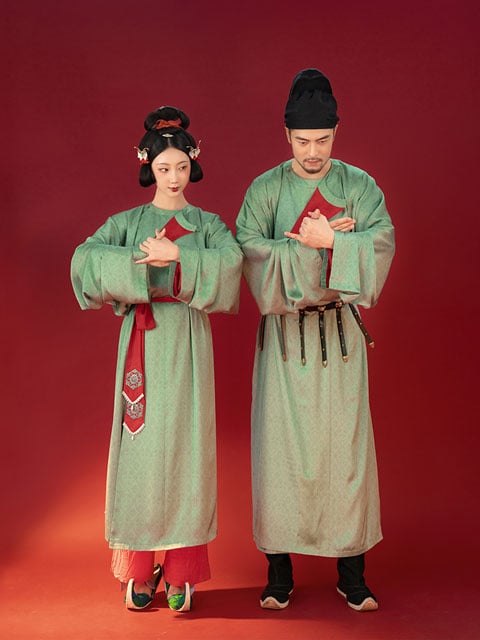 Also historical records such as the Old Tang Book and Ancient and Current Chinese Notes on Tang Clothing tell us that at that time, women used to wear a whole set of men's clothing including boots, dresses, whips and hats.

Aristocrats, common people, at home or going out, many women dressed like this at that time. It is not hard to imagine that Tang was quite an open society for women.

Such is the extravagance of Tang dress. Today we call any jacket with zipper front "Tang costume", as a general term to represent all traditional Chinese dress.

However, this term is used only because people today are proud of that prosperous time. In reality, modern "Tang costume" has much less luxury, extravagance, variety and vitality compared with the original. The grandeur of the metropolis where all nations flocked to admire made China in the Tang dynasty really deserves to be called "Country of Costume".

Eddie
Creative License: The article is the author original, udner (CC BY-NC-SA 4.0) Copyright License. Share & Quote this post or content, please Add Link to this Post URL in your page. Respect the original work is the best support for the creator, thank you!
Tang Dynasty
Related