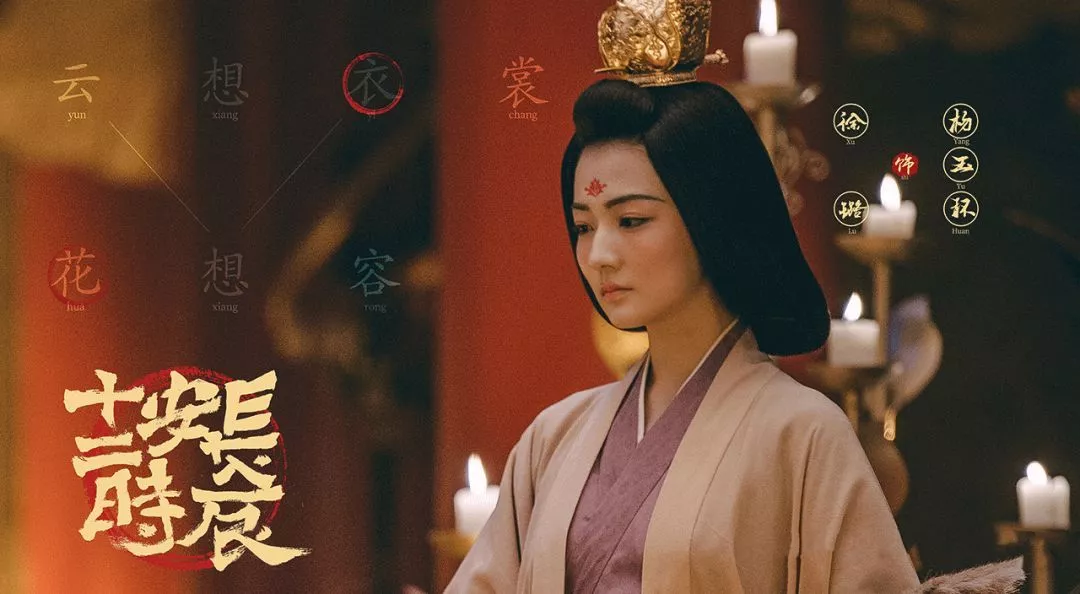 The Tang Dynasty, one of the most prosperous dynasties in Chinese history, not only opened the door to foreign exchanges, but also gave women a new attitude to show off their charm.

As we know, it was popular in that era to have a chubby-body, a high bun, a light, and fluttering Pibo, and colorful makeup, which made the gorgeous “Tang style“.

We have previously introduced the makeup of the Tang Dynasty, today we introduce you to the details of the peach blossom makeup (桃花妆, táo huā zhuāng). 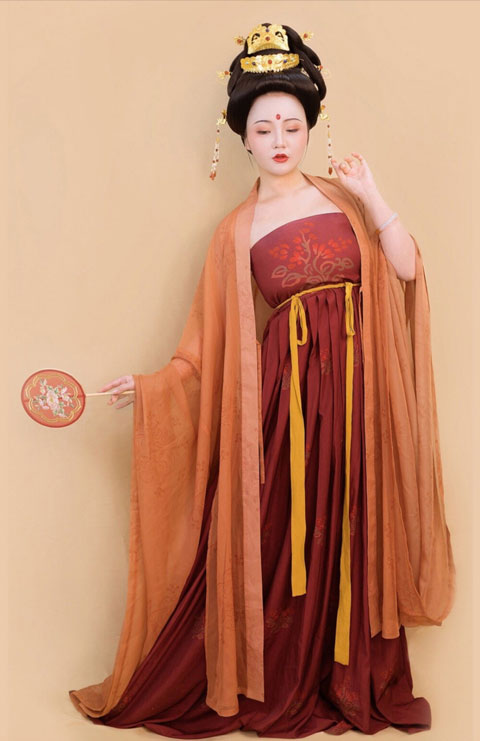 Overall, the entire Tang Dynasty makeup look can be divided into seven steps:

(Click for an animated version of Tang Dynasty makeup)

Seven steps? But fortunately, there is now a simplified version of the peach makeup steps. With only four steps – base makeup, eyebrow makeup, blush, and lip makeup – you can easily get a satisfying peach makeup!

Start with a foundation to give your skin a bright, natural glow. Lightly pat and then press down. Whether you apply it by hand or with a sponge, use the lightly patting method to blend the foundation into the skin for a natural, radiant look! 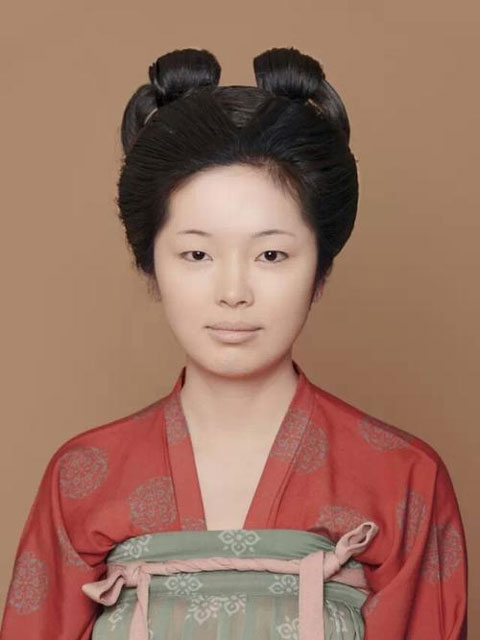 Ancient women pay more attention to eyebrow makeup than eye makeup, they are very careful to draw eyebrows, eyebrow shape also has a variety of changes. Peach blossom makeup eyebrow shape, to be drawn like a thin curved moon shape. In the years of Zhenguan, the painter Yan Liben painted the picture of the “Emperor Taizong Receiving the Tibetan Envoy (步辇图)”, the painting of the court lady is such an eyebrow shape. 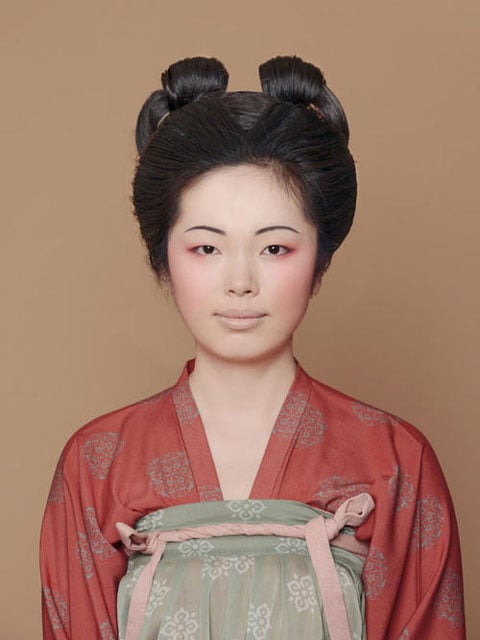 And the lady’s hairstyle is called “Baihe bun”, which has been popular since the beginning of the Tang Dynasty, the Tang Dynasty women have a pair of clever hands, and the hair style is also varied and complicated, for modern people, is simply incredible!

With a pure peach color, apply blush generously on the cheeks. Starting from the position of the lower eye shadow to the temple position, blush draws such a large area to have the effect of brightening the face. In addition, if you are interested, you can also add a Huadian on the forehead (such as the teardrop in the picture). 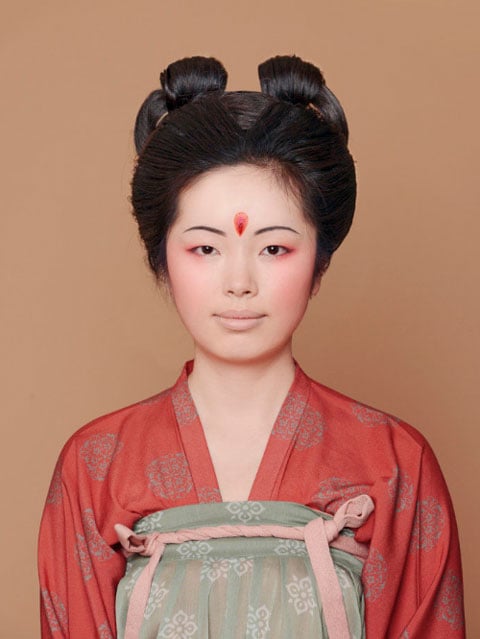 When you put on foundation, remember to put white powder on your lips in order to draw a lip shape on it. When drawing the lip shape, draw a circle smaller than the original lips. 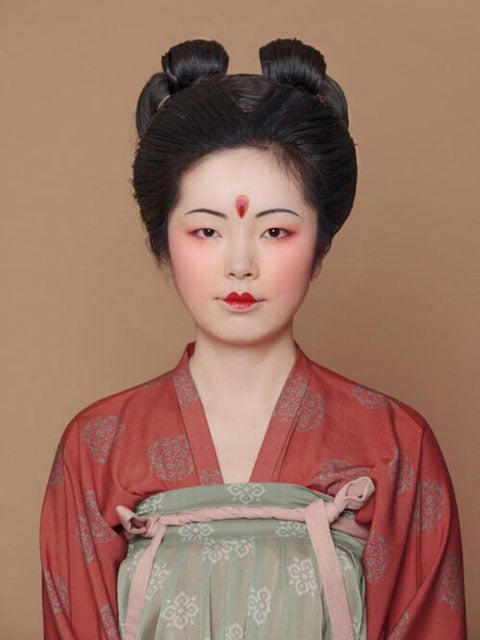 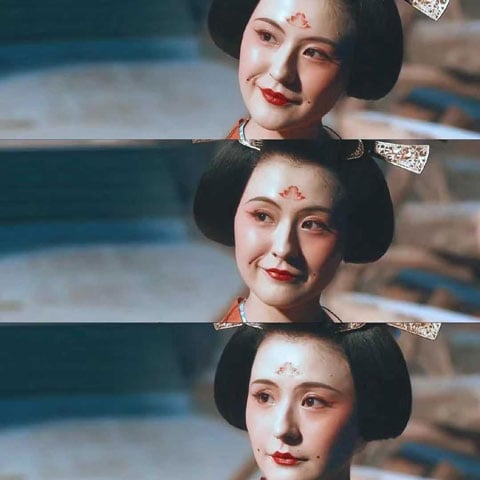 The history of Chinese women's make-up is very long. After the rotation of dynasties, the traditional Chinese makeup has changed with the development of the times, reflecting the changes in customs and thoughts in each era. We will prepare a series of articles to introduce traditional Chinese makeup. Ancient traditional Chinese makeup Throughout the ages, women have different ways and methods to make themselves more beautiful. Compared with the modern, ancient women are more conservative and implicit, but they also have their own set of "secret weapons". As early as in the cultural relics unearthed in the Warring States period, it can be seen from them that at that time, women had the habit of thrushing and use rouge. That is to say, more than 2000 years ago in China, cosmetics had appeared. Of course, ancient China was an agricultural society, always in a state of self-sufficiency, and cosmetics were…

Ordinary Tang dynasty women's clothing we are all familiar with, a short blouse, a long skirt, and then shawls, which is often referred to as "Tang Ru", "high-waisted Ruqun" or "shawls Ruqun". And so on with this set of clothing. But what exactly were these garments called in ancient times, and what were the specific wearing sequence? Let's take a look. The basic equipment of daily women's clothing in the Tang Dynasty is: shirt, skirt, and shawls. In addition, depending on the situation, they also included a Beizi, Mofu (陌腹, underwear), shoes and socks, etc. The following is a description of the types of Tang Dynasty women's clothing for daily and the way to match in the four seasons.   Shanzi (衫子, shān zi, shirt) · Ru (襦,rú) Women in the Tang dynasty wore long-sleeved blouses with narrow sleeves and short bodies, now generally called "Ru (襦)", but according to Tang…