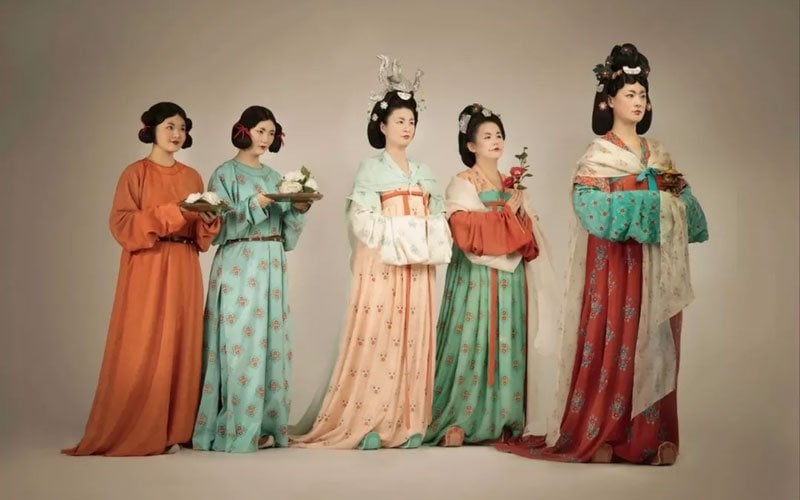 Ordinary Tang dynasty women's clothing we are all familiar with, a short blouse, a long skirt, and then shawls, which is often referred to as "Tang Ru", "high-waisted Ruqun" or "shawls Ruqun". And so on with this set of clothing. But what exactly were these garments called in ancient times, and what were the specific wearing sequence? Let's take a look.

The basic equipment of daily women's clothing in the Tang Dynasty is: shirt, skirt, and shawls. In addition, depending on the situation, they also included a Beizi, Mofu (陌腹, underwear), shoes and socks, etc. The following is a description of the types of Tang Dynasty women's clothing for daily and the way to match in the four seasons. 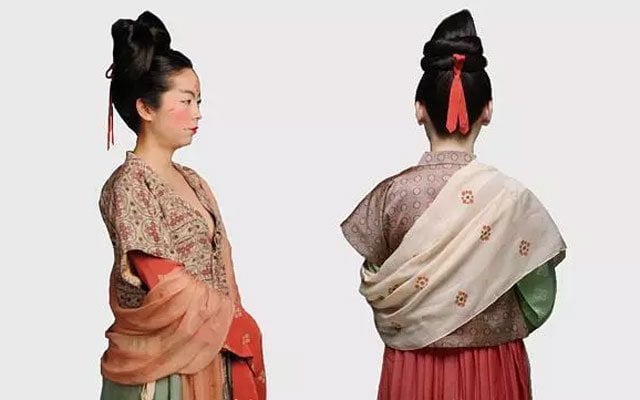 Women in the Tang dynasty wore long-sleeved blouses with narrow sleeves and short bodies, now generally called "Ru (襦)", but according to Tang custom it should be called "Shanzi". Various Tang dynasty documents, unearthed clothing records and poetry novels in the costume vocabulary, mention of daily women's clothing, from the early to mid-to-late Tang dynasty, almost all the tops are "Shanzi".

Shanzi were very short in length, mostly less than the waist, and could be called "Banyi (半衣, half-clothes)". In the early Tang dynasty, the sleeves of Shanzi were narrow, and this was the case in many cultural relics. And in the mid and late Tang dynasty, Shanzi is slightly loose, but is still generally narrow-sleeved style.

There are many kinds of Shanzi collar styles. From frescoes, silk paintings, terracotta figurines, and other images of cultural relics, there are straight collars and Duijin (对襟, parallel opening), round collars and Duijin, round cross collars, and so on, which change with fashion. What is striking is that shirt collars tended to open very low during the Tang Dynasty, especially during the Wuzhou period (武周时期) and the Kaiyuan period (开元时期). 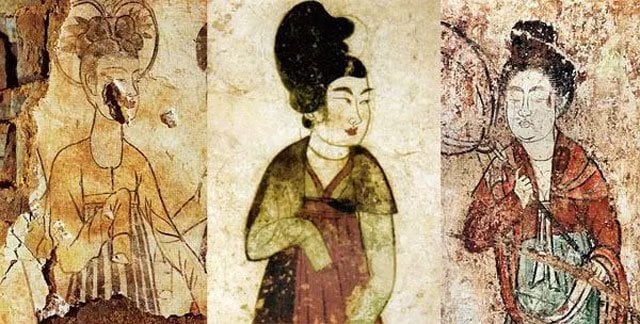 the collar and dress of Shanzi 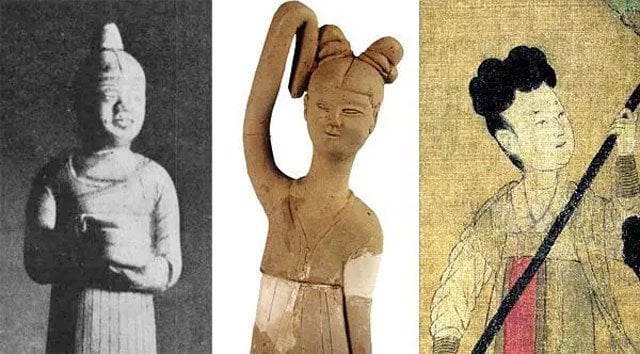 As a commonly worn daily blouse, the shirts were made of a wide variety of materials, mainly lighter and softer damask, Luo (罗), silk, and cloth. The colors are purple, scarlet, red, blue, yellow, and white, and there seems to be no taboo. The sleeve ends of the blouses were trimmed with different colored materials or ornate brocade embroidery. Shanzi generally refers to a singledress, switching to Jiayi for cold winter days, in this case, it is called "Ao".

But the word we like to say now, "Ru", was probably more commonly used in the Tang dynasty to refer to women's large-sleeved blouses. During the Han and Wei Jin Dynasties, "Ru" originally referred to a short garment relative to the Pao (robe), and was a common garment at the time. Shanzi, on the other hand, was inside clothing to be worn under the gorgeous outer clothing. Later on, the proportion of "Ruqun" declined significantly, and was replaced by "Shanqun" and "pleated skirts", and the small-sleeved Shanzi, originally used as inside clothing, were gradually worn outside.

At this time, the Han and Wei Jin daily use of Ru as the former costume had the tendency to evolve into a formal dress and a musical costume. Therefore, the "Ru" in Tang Dynasty literature is often referred to as "big sleeve", which appears in the description of the ancient costume, or in the configuration of ritual clothes and dancing clothes. With the exception of the large sleeves, the collar style and wear is no different than the popular Shanzi of the same period. 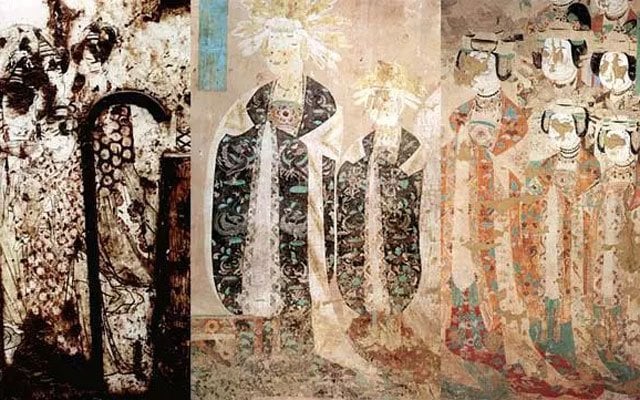 Shanzi, often worn match with a short-sleeved or sleeveless short outwear, has the same collar style as the Shanzi, with round collar and Duijin, straight collar and Duijin, or should be called "Beizi (背子)", nowadays it is more commonly called "Banbi", but the definition of "Banbi" in Tang dynasty records refers specifically to men's "sleeveless short coat with cross collar". But women's outwear form outside the Shanzi is not the same as the Banbi (It is true that women in the Tang dynasty could also wear Banbi, but only if they wore men's clothing and Hufu). 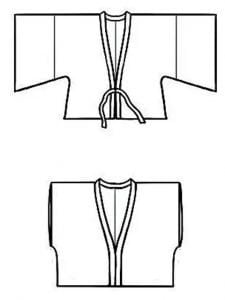 Beizi is a sleeveless garment made of brocade and used as a women's outer garment without the Yaolan (腰襕). There is an early eighth-century "Wunǚ Beizi" made of brocade with a sleeveless and Duijin in the Shōsōin Shoso Repository. According to the literature, during the Tang Dynasty, women's sleeveless outer garments made of ornate fabrics were called "Beizi". The tomb of Astana in Turpan, Xinjiang unearthed many pieces of female terracotta figurines dressed during the Wu Zhou Dynasty, narrow-sleeved shirt will have more than a set of brocade Duijin sleeveless short clothes, extremely similar to the cutting method of the Beizi in the collection Shōsōin Shoso Repository.

In addition, the Tang dynasty literature also has the name "Banxiu (半袖, half-sleeved)" and "Duanxiu (短袖, short-sleeved)". Through Tang dynasty wall paintings and terracotta figurines, also roughly two kinds, one almost sleeveless, one is in the short-sleeved. If we look at the real thing in the Shōsōin Shoso Repository, it is possible that "Beizi" refers to the brocade sleeveless garment, while "Banxiu" and "Duanxiu" refer to the sleeve length is longer than "Beizi", and made of more common and varied fabrics.

Tang Dynasty women's clothing will also hang a long scarf outside, called Peizi, now used to call it "Pibo (披帛)", the fabric commonly used light yarn, Luo, the translucent Peizi is also frequently seen in Tang Dynasty frescoes. The tomb of Astana unearthed many pieces of human figurines wearing Peizi, and all of them, mostly with mixed-colored lozenges Luo. Thicker Peizi is also available for use in the cold. The Peizi's decorations of the mid and late Tang Dynasty are more and more gorgeous, and besides printing and golden paint, there are also embroidery and painted decorative techniques. 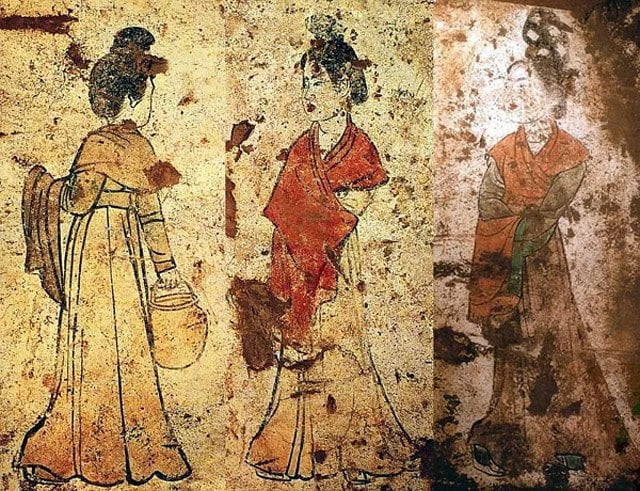 Shawl Peizi from the Wuzhou period 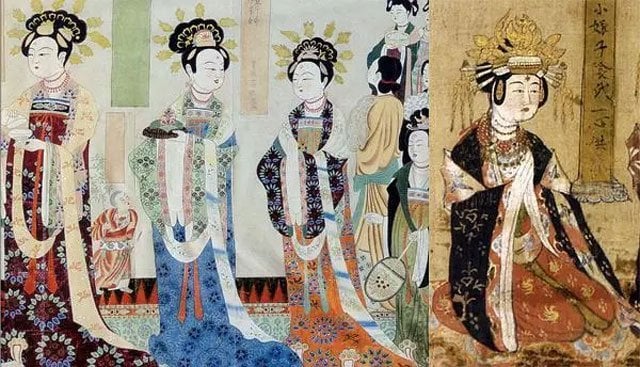 Wrapped and draped Peizi from the late Tang dynasty

Peizi is draped in a variety of ways, the more common being one end buttoned to the chest and the other end looped backward around the shoulders and back, then draped between the arms in front of the body. The heavier Peizi can also be draped from back to front, intersecting at the front of the chest, which is almost like a blouse and also has some protection from the cold. There are also thin and light yarn Peizi to go to the back and drape behind the body at both ends. The Peizi used in the late Tang Dynasty was extremely long, and the way of winding them was also more roundabout. 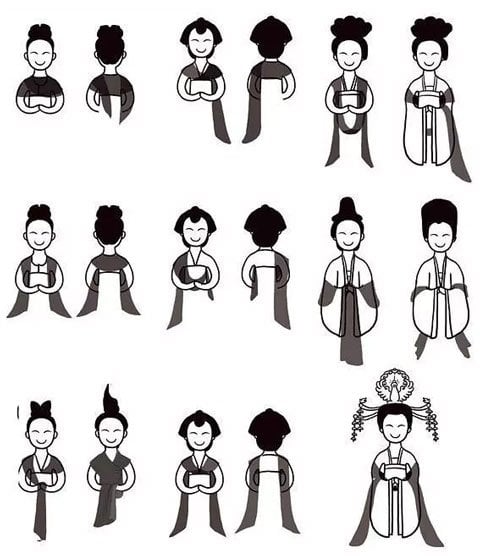 There were many different styles of Qun in the Tang dynasty women's clothing, and changed with fashion. In the early Tang dynasty, the skirt was commonly Jianse Qun (间色群), with the stripes gradually changing from coarse to finer and richer in color, but the main color was red with other colors in between. As for the name, from Wei Jin to the early Tang Dynasty, there are "Shuang Qun (双裙)", "Fu Qun (复裙)", "Jian Qun (间裙)" in the literature of the name, but also directly to use the color to name. Jianse Qun spread to the Korean Peninsula and Japan during the Wei, Jin, and Northern and Southern Dynasties. It continued to be used in Japan until the Nara period, and was also named directly after its color. 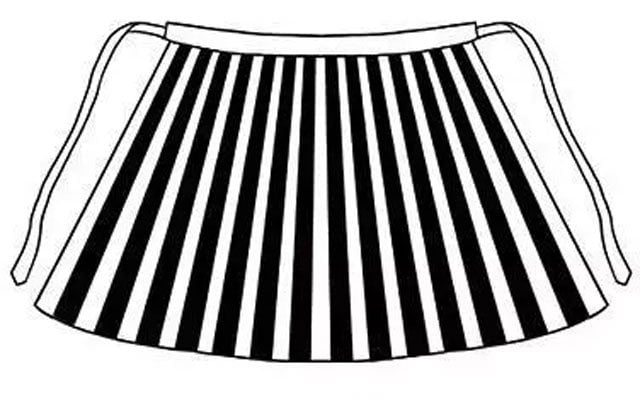 Sometimes a transparent gauze skirt was added to the Jianse Qun, as in the case of a clothed figurine from the Astana tomb, which was covered with a blue gauze over the red and yellow inter-colored skirt, making it difficult to detect. There was also a kind of single-color skirt, made of multiple pieces of fabric stitched together, narrow at the top and wide at the bottom, or with a number of pleats. 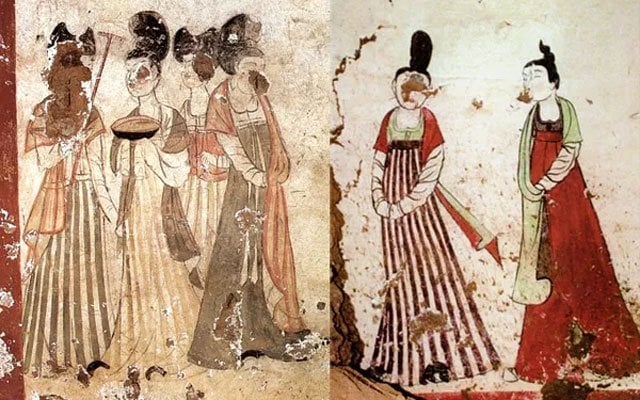 According to mural paintings and terracotta figurines, the seam of the skirt in the early Tang dynasty was often directly in front of the front, and one of the ways to wear the skirt was from back to front. Many skirts also had thin straps, which were sling skirts, and were common from the Northern, Sui, and early Tang dynasties until the flourishing and middle Tang dynasties. 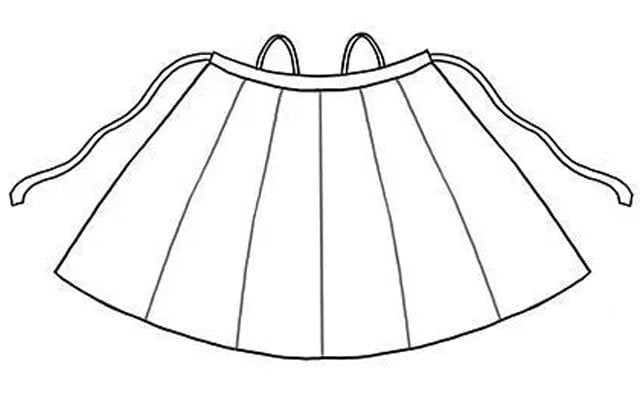 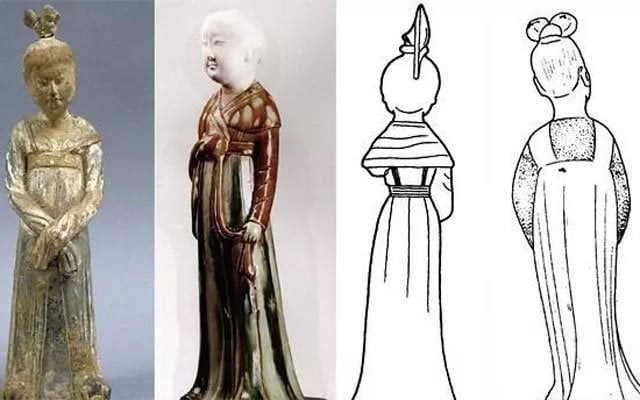 According to several pieces of women's skirt artifacts unearthed in Xinjiang from the early Tang to the Kaiyuan period, there were six Fu, eight Fu, and twelve Fu (Fu means the amount of fabric stitched together into one skirt). The skirts were red, green, purple, yellow, and blue, and were also decorated with prints and paintings. The red skirt is particularly well documented and is often referred to as the "Shiliu Qun (石榴裙, pomegranate skirt)".

In addition, the Tang skirt included not only the skirt body, but also the skirt waist and the skirt belt. The waist of the skirt was often made of silk tapestry, brocade, and embroidery fabrics, and in the late Tang murals, the waist of the skirt was often bundled up to the chest, which was ornately decorated, also in different colors and materials. On top of the long skirt, sometimes a short skirt only up to the waist would be added, from the back to the front, usually with a gorgeous edge. This style of dressing was very popular in the Wei, Jin, North and South Dynasties, as a remnant of the previous dynasty, and was still relatively common in the early Tang Dynasty. 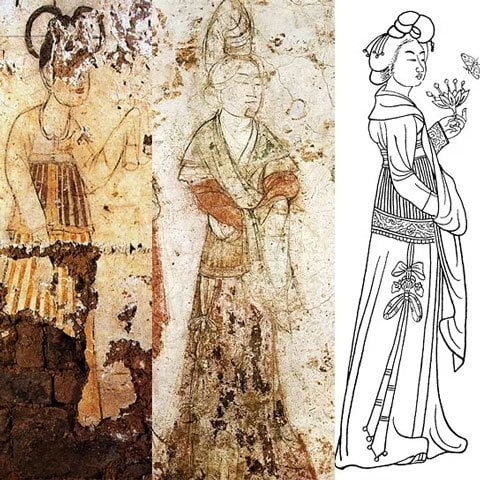 The above is the outer garment, within the Shanzi must also have undergarments, the image of cultural relics are generally invisible, but from the literature, depending on the situation, there will be several intimate apparels, more common is a variety of so-called "Wadu (袜肚)", "Mofu (陌腹)" and so a series of wrapped belly class clothing.

As for the lower body, as mentioned above, Qun is often more than one layer, depending on the status of the occasion and preferences. The skirt should also be worn the pants inside, such as Ku (袴) and Kun (裈). open-crotch Ku should wear outside the Kun, often made of gorgeous brocade, the color is also commonly used red scarlet and other bright colors. 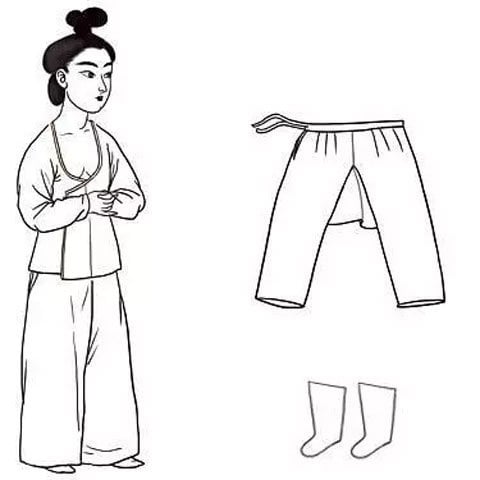 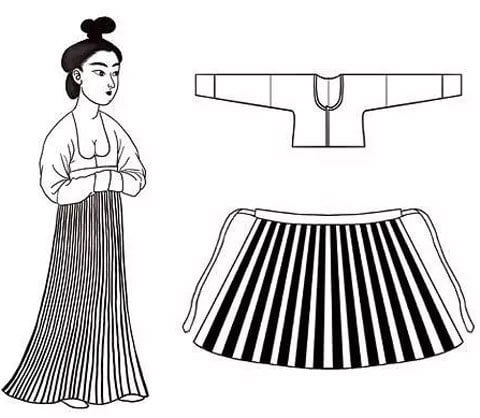 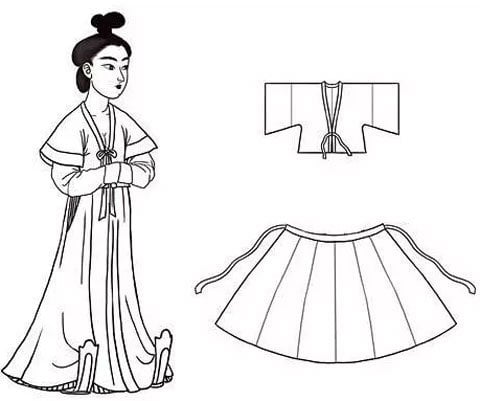 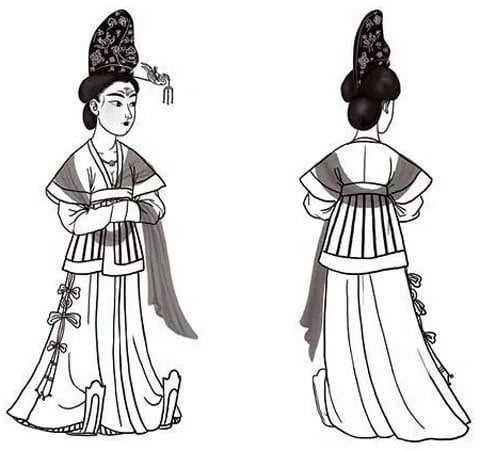 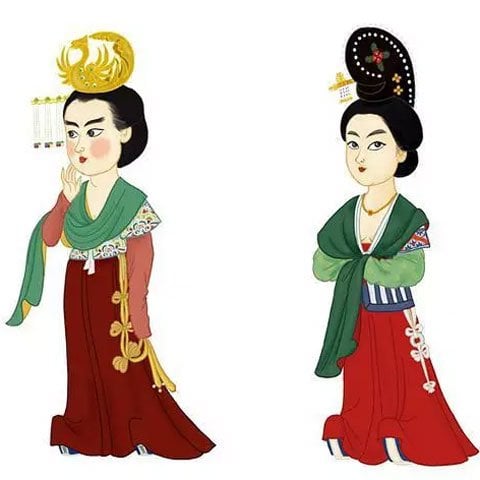 As for Tang dynasty women's clothing for the four seasons, in spring and summer, they mainly wear single garments, such as single Shanzi, single Qun, light yarn capes, single pants, and other light clothing. When the autumn and winter are cold, change the pieces of clothing into heavy Jiayi or cotton clothes, such as Ao, brocade Beizi, etc., no big difference in form. Then prepare shoes, socks, jewelry, bun, pendants, and others, and these are the kinds of daily clothes that women of the Tang Dynasty needed.

Changes in the popularity of Shanzi, Qun, Peizi combinations from early to mid-to-late Tang dynasty.

The above is about Tang dynasty women's clothing, and you can click here for more information about the style of Hanfu and the Tang Dynasty clothing history and Tang dynasty makeup.

Creative License: The article is the author original, udner (CC BY-NC-SA 4.0) Copyright License. Share & Quote this post or content, please Add Link to this Post URL in your page. Respect the original work is the best support for the creator, thank you!
Hanfu HistoryTang DynastyWomen Hanfu
Related

How to Make a Hanfu(2) – Tang Dynasty Shawl: Peizi