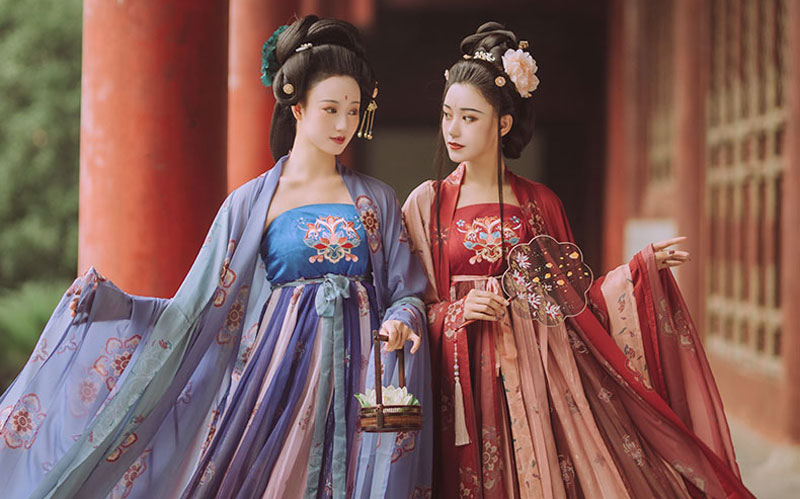 Hezi Qun (诃子裙), a kind of Moxiong long skirt with a big-sleeved shirt, has suddenly become a popular hanfu style for summer. Perhaps your initial impression of it is that it is one of the Tang Dynasty hanfu styles. But it's much more than that, and today we're going to introduce you to the origin and types of the Hezi Qun in more detail. 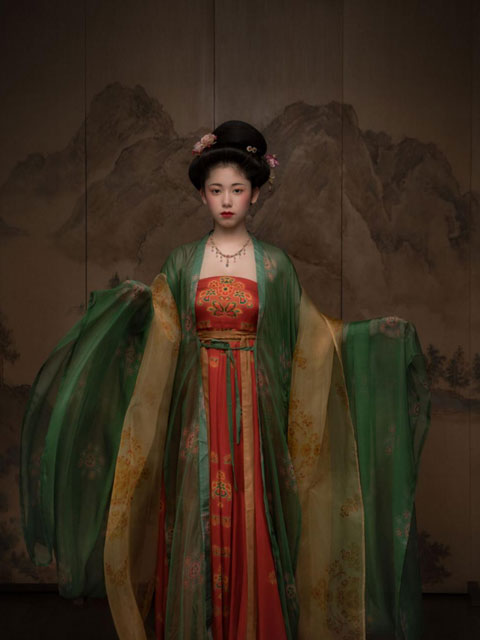 Let's first understand what Hezi is.

Hezi(诃子) is one of the ancient Chinese women's undergarments, also known as "Waxiong (袜胸)", "Moxiong (抹胸)", "Lanqun (襕裙)", "Hehuan Lanqun (合欢襕裙)", and so on. It was popular in the Tang, Song, and Ming dynasties. From the back to the front of the bundle, the following line, can also be tied around the waist of the skirt, also known as the Dudou (肚兜) in the Qing Dynasty.

Originally, Hezi had little to do with hanfu. In most of the ancient literature, Hezi is a kind of traditional Chinese medicine. 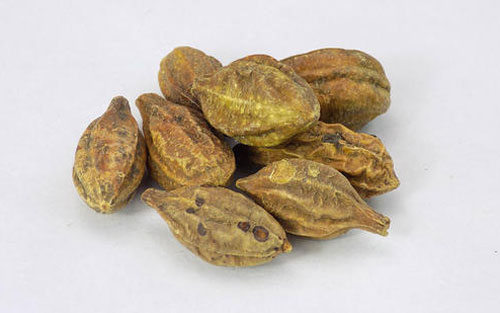 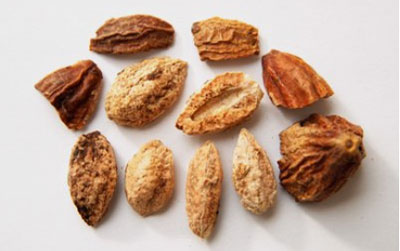 The earliest documentary record about Hezi and hanfu is found in the Song Dynasty. Song dynasty Zeng Zao in his book "Lei Shuo (类说)" has recorded: one day, Yang Guifei and An Lushan had a private date. In the middle of the date, An Lushan accidentally scratched Yang Guifei, and the wound was on her chest. She cried and said, "I was afraid that the emperor would see the scratch, so I used gold in the shape of Hezi to cover the wound." Later, the women of the palace followed the example of Yang Guifei.

After that, Ming Dynasty scholar Tian Yiheng also mentioned "Hezi" in his "Liu Qing Ri Zha (留青日札)": "Waxiong, that is, Tang 'Hezi' and so on ...... from the back and surrounded by forward, so also named Hehuan Lanqun."

It is only here that it is clearly pointed out that the "Hezi" is a kind of underwear that is popular in the Tang Dynasty, which is enclosed from the back to the front. 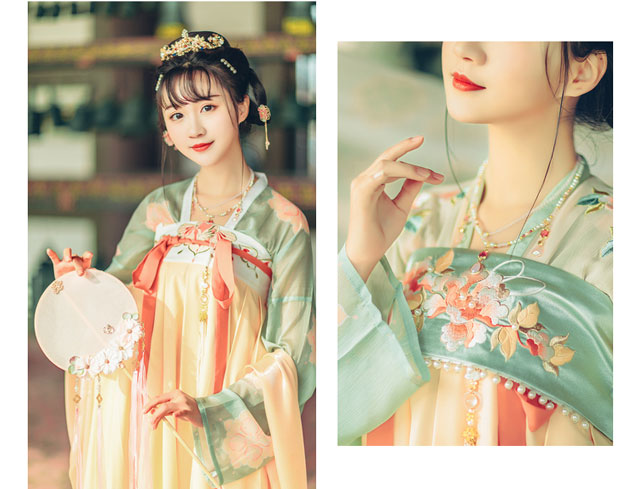 In fact, there were Hanfu merchants who made Hezi many years ago, and the popular Hezi was mainly used as an accessory, relying on small side ties to fasten and wear on top of the skirt head of a Qixiong Shanqun, shaped like a square piece of cloth that resembles a Moxiong. However, because of the lack of traditional forms and cultural heritage support, the Hezi was no longer produced.

2. The origin of Hezi Qun

Because of the lack of examples of excavated artifacts, it is difficult to determine whether the upper and lower parts of Hezi Qun are connected.

Zhou Fang's Court Ladies Adorning Their Hair with Flowers is the main reference for recovering the Hezi Qun, in which the noblewoman is draped in yarn, and underneath the yarn is the familiar Hezi Qun. 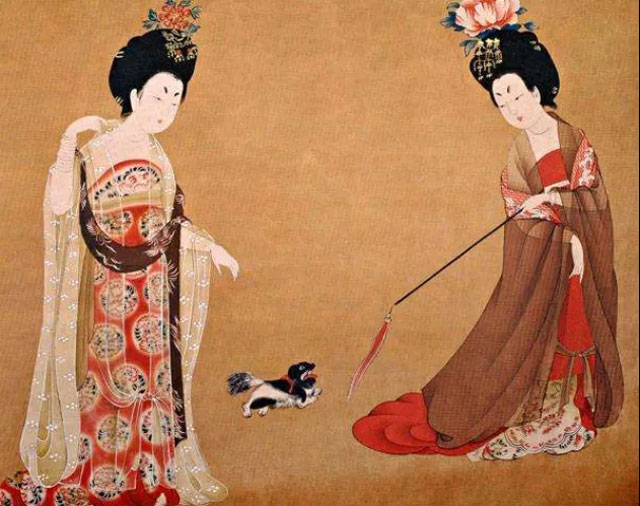 Furthermore, there is no documentary or physical evidence to prove that the dress in the painting is a Hezi, and even if the Hezi was indeed a popular dress form in the Tang dynasty, there is still no trace of it in the Tang literature.

Therefore, it can be concluded that the Hezi Qun that are currently popular were mainly restored with reference to the image of Zhou Fang's paintings, and that there is a great deal of speculation about their internal structure. 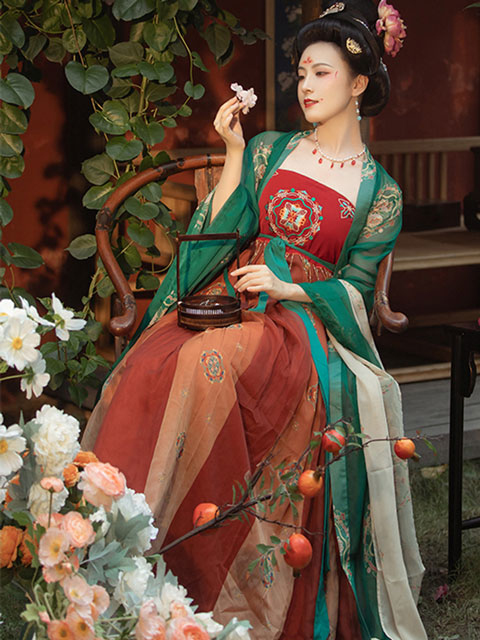 3. Is the Hezi Qun considered a type of Hanfu?

The image artifacts can be used as a reference for costume restoration, but not as the only reference, after all, it is often difficult to figure out the internal structure of the costume from the image materials, and should be combined with the documentary materials and costume artifacts to achieve a higher degree of restoration. 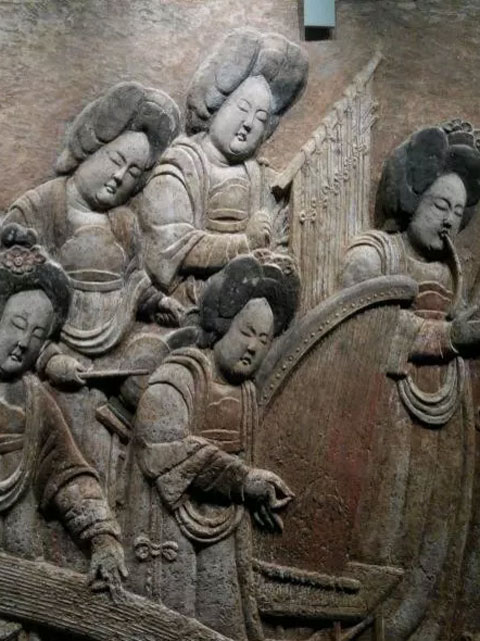 Although Hezi Qun has not yet appeared in the excavated artifacts, the possibility of its existence should not be directly eliminated. The pictorial material still has considerable reference value, and in addition to the "Court Ladies Adorning Their Hair with Flowers", there are other mural materials in which the style of "Hezi Qun" appears, although it may not have been called "Hezi Qun" at the time.

The answer to the question of whether this type of Chinese costume, which is referenced by images but not excavated, belongs to the Chinese costume system is doubtful. The answers to these questions will have to be proven by the release of more archaeological data in the future. 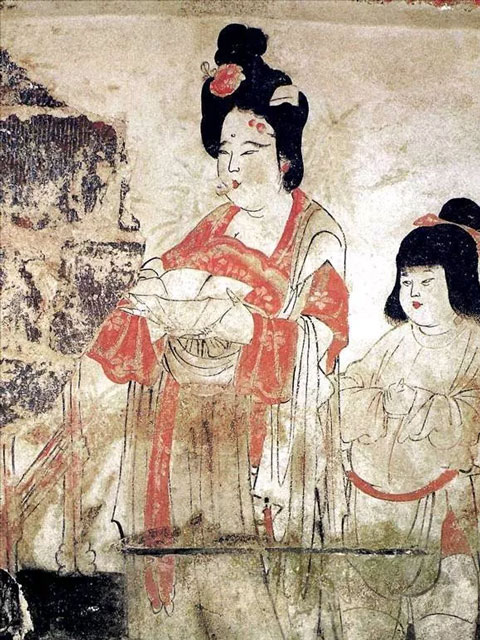 Da Xiu Shan (大袖衫, large-sleeved shirt) is a good partner for the Hezi Qun. It is a kind of noble dress and is usually worn on important occasions. It was used until the end of the Ming Dynasty, matching with Xiapei, also called Da Xiu (大袖) or Da Shan (大衫).

After the flourishing Tang Dynasty, the style of women's clothing became wider and wider. In the middle and late Tang period, this feature became more obvious, and the general women's clothing, sleeve width is often more than four feet.

In "Court Ladies Adorning Their Hair with Flowers", the beauty's upper body is covered with a Da Xiu Shan made of gauze. Because of the painter's realistic approach, the delicate and transparent clothing material of the Tang Dynasty is faithfully depicted, and the woman's soft shoulders and arms are also realistically depicted.

In today's hanfu market, we can see three forms of "Hezi Qun". 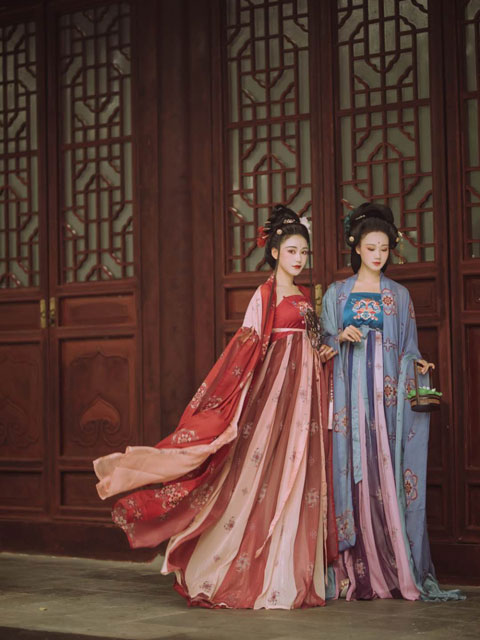 The first of which is a combination of a single piece made of rectangular cloth and silk, similar to a Moxiong, match with Qixiong dress, worn on the outermost layer for decorative purposes.

This practice is a continuation of the documented belief that the Hezi is a kind of Moxiong. It also shows the style form of the ancient painting of the mural by adding a wide skirt head and match with the long skirt. 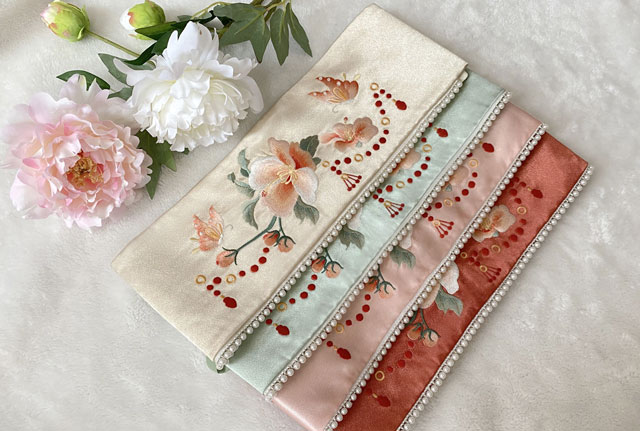 Hanfu Dressing Tutorial - How to Wear a Hezi

The second form is to raise the front half of the skirt, to a high front and narrow back, and decorate the skirt to create a Moxiong-like effect, which can be called a "mountain-shaped piece" skirt.

This front looks like a Moxiong, the actual Qixiong long skirt with a petal-shaped skirt head. Not only is the skirt head more obvious,  you can also see that the skirt outside, narrow sleeves of the top to wear inside. 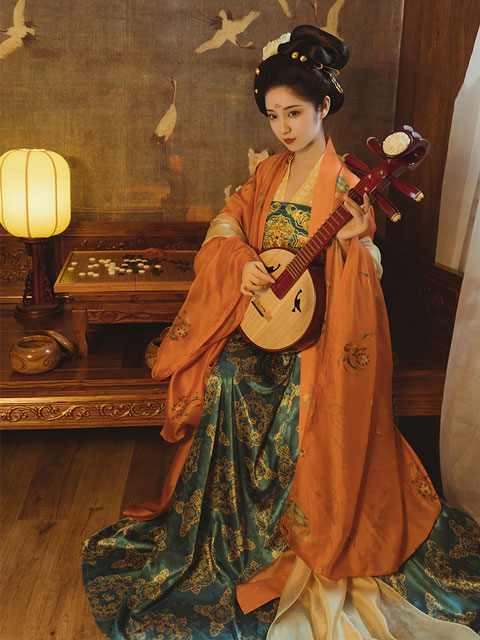 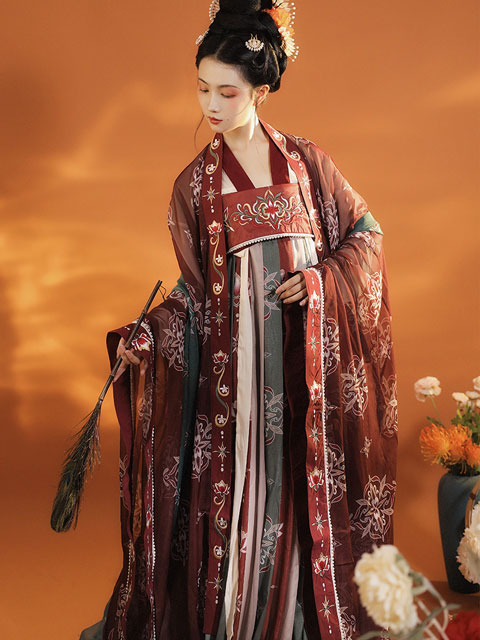 The third form can be understood as a Moxiong and skirt are sewn together. This type of situation can be broadly divided into two kinds. 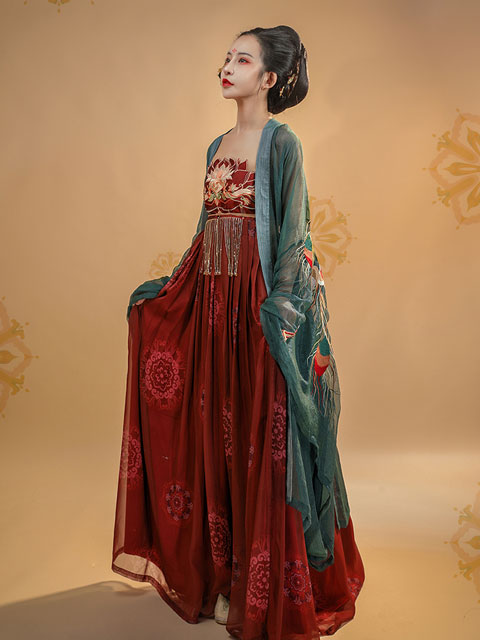 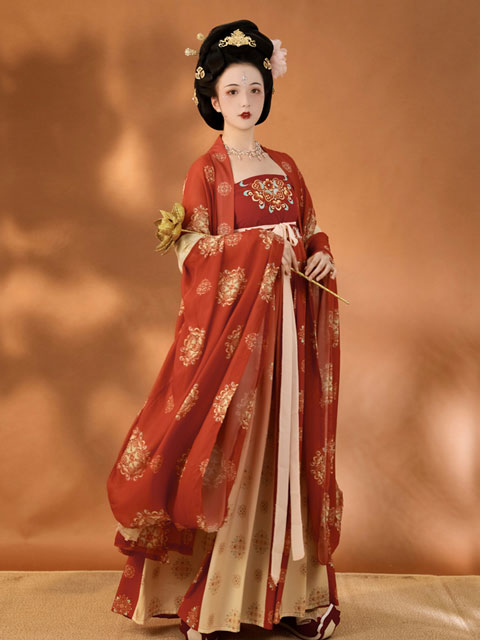 April
Creative License: The article is the author original, udner (CC BY-NC-SA 4.0) Copyright License. Share & Quote this post or content, please Add Link to this Post URL in your page. Respect the original work is the best support for the creator, thank you!
Tang DynastyWomen Hanfu
Related