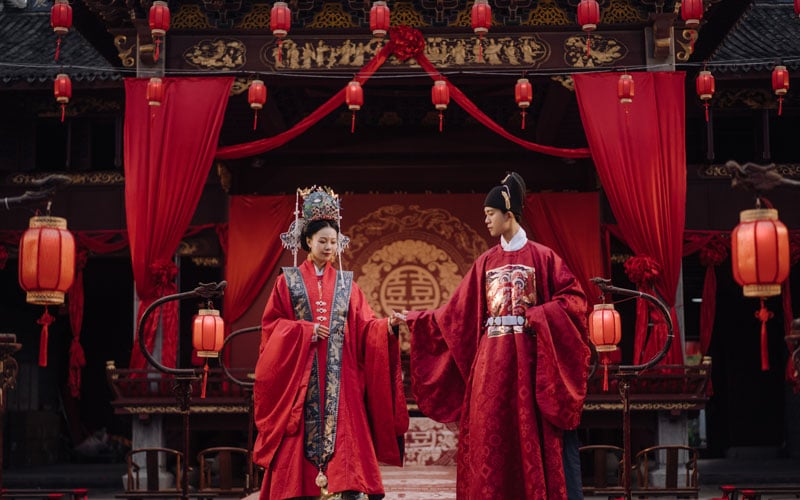 In the New Year when everything is reviving. There is nothing better than a wedding banquet to bring people joy.

It is undoubtedly the dream of many Hanfu lovers to hold a Hanfu wedding. In a traditional Hanfu wedding, the vintage costumes and rituals, the dreamlike wedding scenes, the unchanging love, and vows, are revisited again and again in the traditional ceremony, becoming more profound and ritualistic.

The blogger "Jingzhishisui (静知时岁)" spent two years preparing a Ming-style wedding for herself, from etiquette, clothing, to the process, are very attentive, rich in detail and full of ritual are breathtaking, let's take a look.

Thousands of years ago, the old ancestors gave us the main color of the Chinese wedding scene - red. 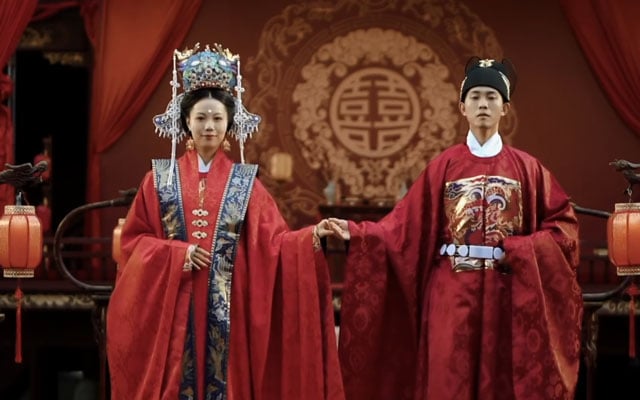 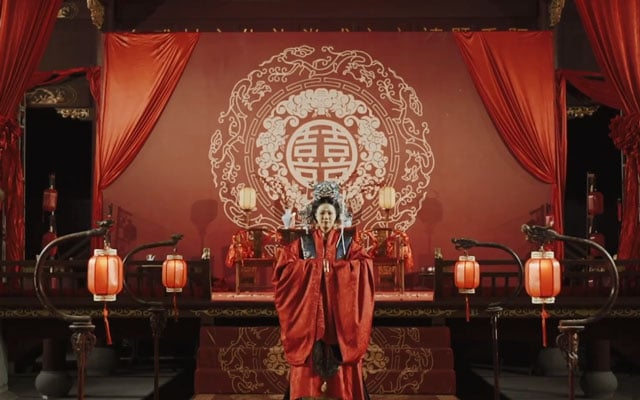 The headdress is also very elaborate, the bride's headdress is "Sanlongliangfengguan (three dragons and two phoenix crown)", using traditional techniques, the style is exquisite and complex, emerald color, three dragons and two phoenixes are vivid, gold dazzling, two sideburns with pearl decoration. The bridegroom wears a Wushamao and has a strong spirit. 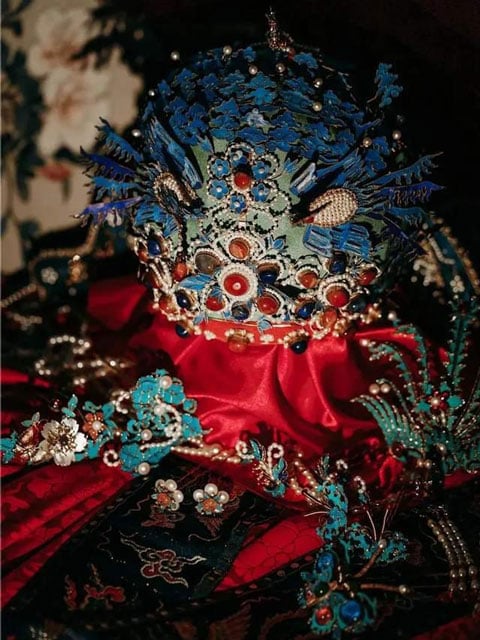 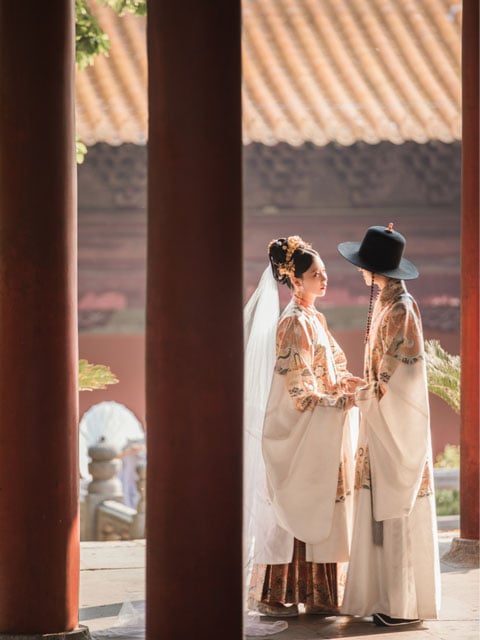 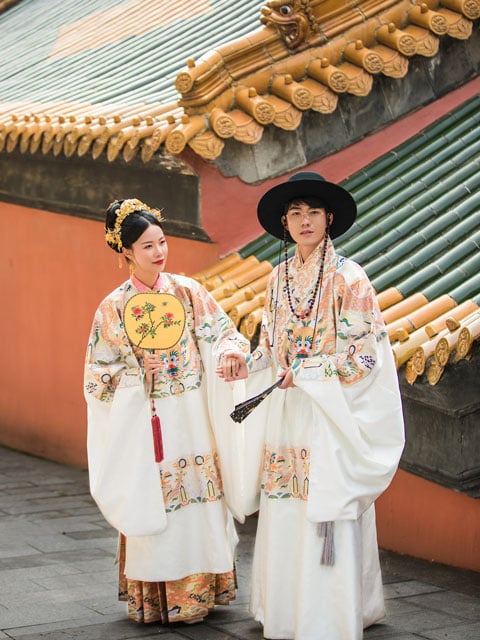 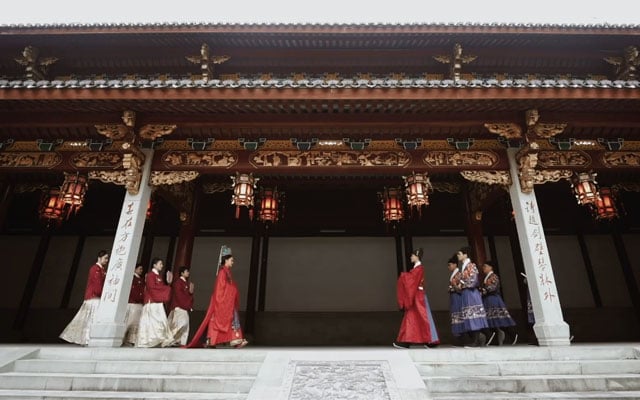 After countless field trips, she finally chose the venue in a traditional cultural hall. The interior of the auditorium was decorated with red silk, paper cutouts, and lanterns. 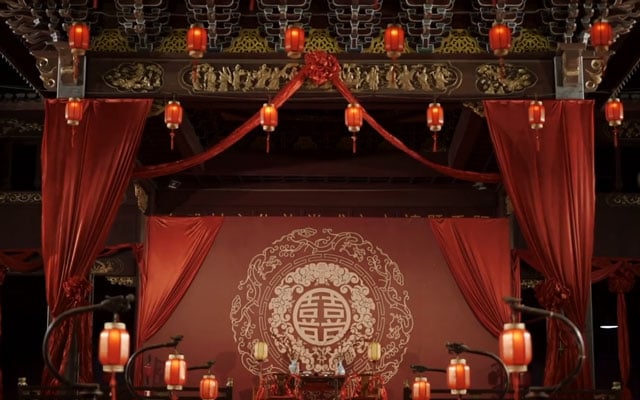 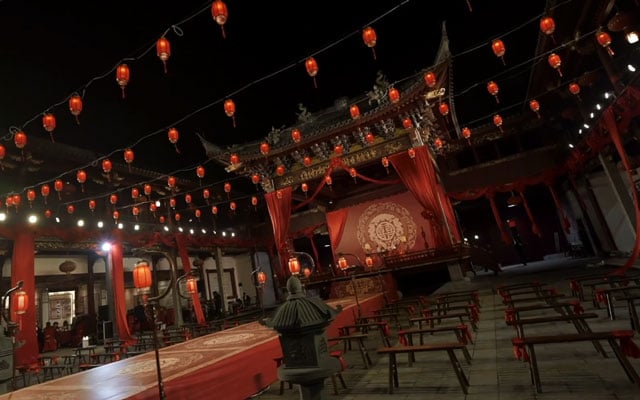 From lights, ornaments, to tableware, are carefully selected against the data, whether it is loaded with fruit celadon high bowl or wine jug, all are antique style. 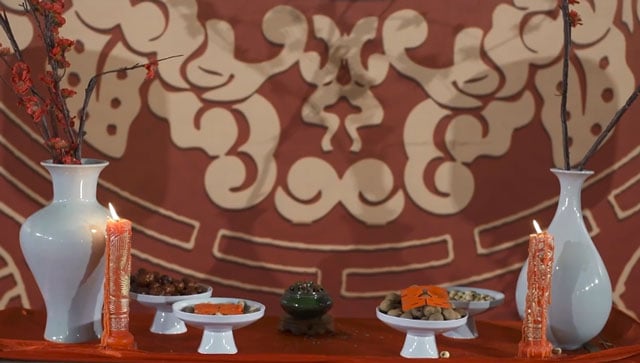 For the process of Chinese Hanfu wedding, "Jingzhishisui" has selected 10 traditional rituals as the main rituals by referring to the ancient texts such as "Yili Shihunli (The Book of Rites: Wedding Ceremonies)" and "Code of the Great Ming Dynasty" about the wedding rituals of the scholar and the prince.

Before the main ceremony begins, the bride should first perform the "Jiaomian ceremony". In ancient times, an important ceremony before the bride is married, is to remove the bride's forehead, sideburns of sweat hair, which is said to suggest a "smooth and happy marriage". This is also relatively rare in modern weddings.

Once the auspicious time arrives, the wedding begins. The groom cooperates with the groomsmen to perform the incense burning ceremony and then steps into the mian hall.

The master of ceremonies reads the words and the groom stands still, and everyone waits with anticipation for the most important moment to come.

The bridesmaids opened the Tuan fans one by one, and the bride appeared behind the fans and slowly stepped out, stunning the whole audience.

The groom gives a gift to the bride, and the gift is a couple of swan goose.

Swan goose are migratory birds and have only one companion for life, so the ancient people use swan goose as a gift to symbolize that the couple will never leave each other in life and death and be faithful and devoted. The bride receives the gift, then the groom in front, the bride in the back, the two of them walk into the hall with a red silk ribbon.

The bride and groom wash their hands with a porcelain plate, signifying the washing away of the past and entering a new married life.

The next is the most familiar: first bow to sky and earth, second bow to mutual parents, couple bow to each other. The groom bends over with arch his hands and the bride bends her knees with hold her hands.

After they were seated, the deacon cut a strand of hair from each of them and tied it with a red tassel into a Hebao (荷包), signifying that the couple will be married forever.

"Jin" is a kind of bitter gourd, which is divided into two and connected by a red thread at the end, holding wine in it, and the bride and groom each drink a Jin, and drinking bitter wine together means that they will share the hardships and sufferings after marriage.

The good fortune and longevity elders of the family throw peanuts, lotus seeds, dried longan, and lychees to the newlyweds, signifying the early birth of a son, fullness, and eternal union.

The bride and groom will walk hand in hand, "To hold your hand, to grow old with you".

At this point, the Chinese Hanfu wedding ceremony is completed.

Jingzhishisui also shared the wedding video with netizens, many of whom said, "This is the most beautiful Chinese Hanfu wedding they've ever seen!" When you watch this wedding, will you feel the same way?

With the development of modern society, people's life is more and more inclined to simplicity and convenience. The sense of ceremony is becoming more and more diluted. But fortunately, the quality part of traditional culture has not been forgotten, and there are still many young people enjoying it to this day. I believe there will be more and more Hanfu lovers will like Hanfu wedding, besides being able to feel the charm of the culture, it is a good memory for themselves.