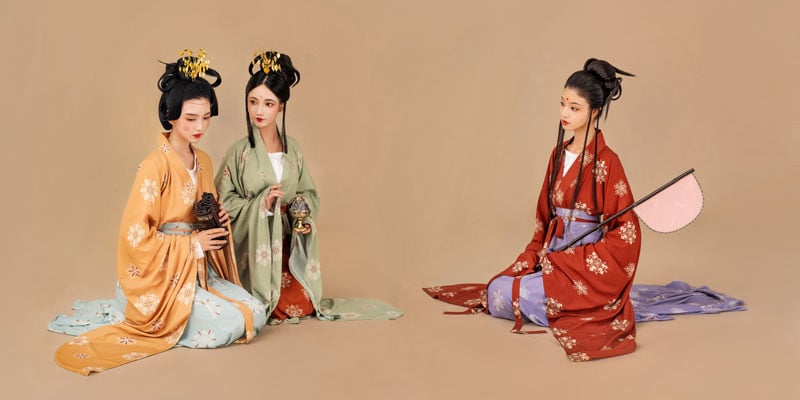 Unlike the Han, Tang, Song, and Ming dynasties, the Wei, Jin, Northern and Southern dynasties, were the most frequent period of regime change in Chinese history, mainly divided into

The development of Chinese culture during this period was particularly affected by the long period of feudalism and continuous wars.

As a result of the interplay of many new cultural factors, the Northern and Southern Dynasties became a tumultuous but poetic era, with the amorous style of a flamboyant gentleman and the leisurely thoughts of a gentle girl. 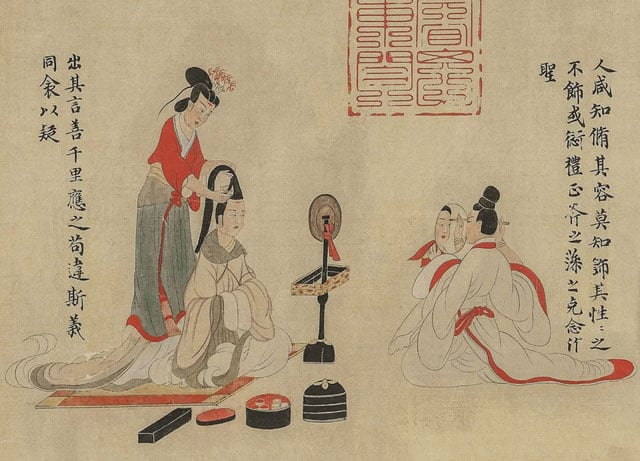 In a simple and bright move under the skirt, there is a unique "Northern and Southern Dynasties" hanfu flavor, and the poetry of the oriental landscape is linked in the softness and simplicity.

In this article, let's take a closer look at the unique aesthetic of this era and teach you how easy it will be to match the "Northern and Southern Dynasties Hanfu" with a classical flavor. 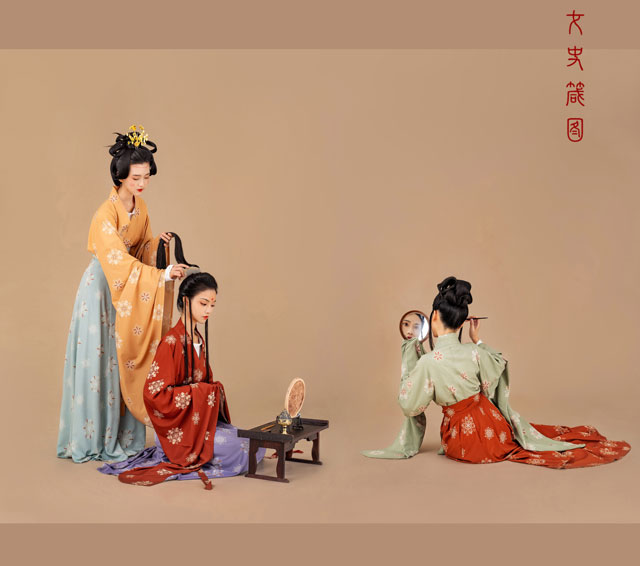 The style trend of hanfu in the "Northern and Southern Dynasties"

During the Northern and Southern Dynasties, hanfu were largely inherited from the legacy of the Qin and Han dynasties, but at the same time, there were innovations.

During this period, the costumes became more open and flowing, and both men and women loved the wide and flowing big-sleeved shirts, and generally, the upper body design was more simple, while the lower skirt was more gorgeous, with a belt around the waist and a hem falling to the ground, which would look a sense of handsome and dashing. 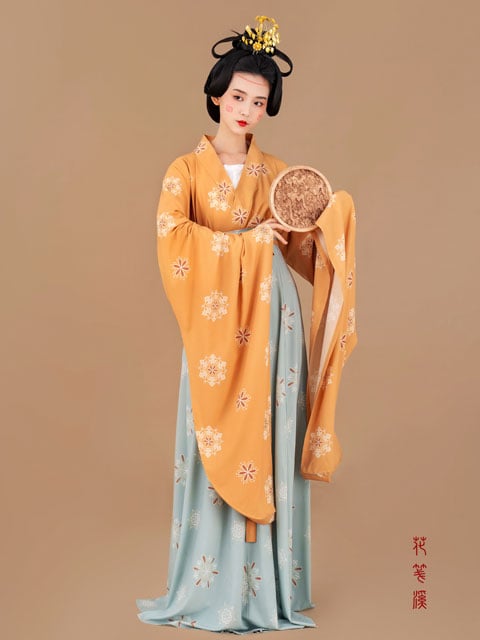 Since the society at that time was more turbulent, people were generally fascinated by the magic of the immortals, so they would have some "immortal style" in their dress. Although the skirt is not luxurious, but the pursuit of the ultimate light and silky fabric, the waist of the skirt is simple, but can be matched with a long, thin, and flowing belt, the overall feeling is very elegant. 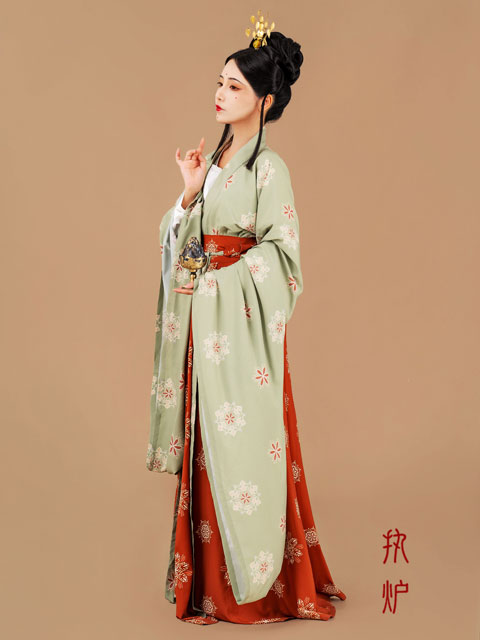 The key of wearing the Northern and Southern Dynasties Hanfu

In order to express the flavor of hanfu, the color scheme must not be missing the "traditional colors". The traditional Chinese color scheme with water as the medium, this transparent intermediary can change the color intensity still retain the original brightness and purity of color, the visual effect is very comfortable.

Matching can draw on this idea, Take this series recovered hanfu style as an example, the combination of date red with light purple, these two colors are more visually striking, can quickly grab the viewer's eye. 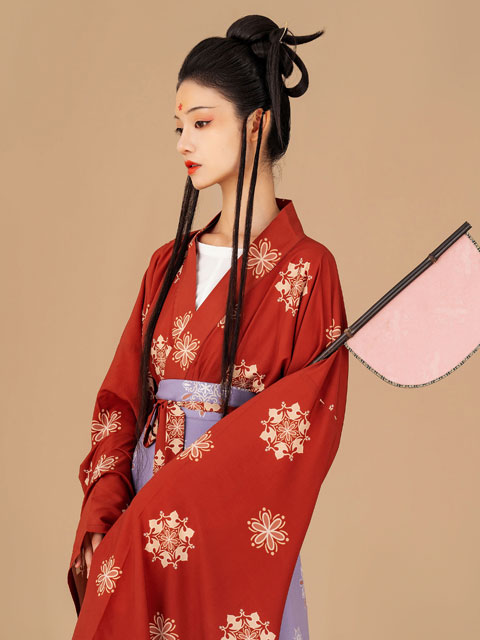 Or with soft yellow and azure, this color scheme is more simple and gentle. 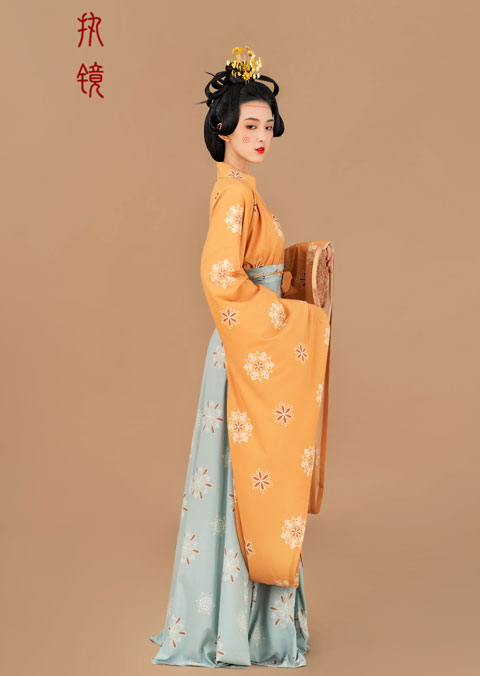 If you want to be more classical some, can also try bean green and date red. 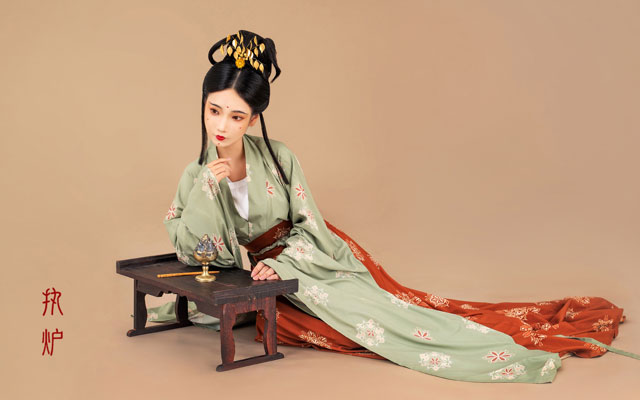 Although the hanfu of the Northern and Southern Dynasties was made in a flowing style, it was actually more important to pursue texture in the materials used, such as softer satin, or silk with dark patterns, in addition to the mixed chiffon fabric. The drape of these materials is particularly good, not easy to pleat, wear a very elegant body. 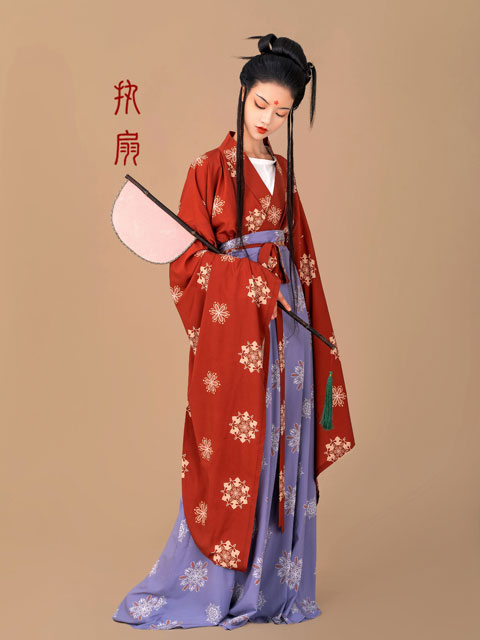 Choosing a restored hanfu style based on cultural relics

And, we can look for inspiration from the famous ancient Chinese painting "Admonitions of the Instructress to Court Ladies". 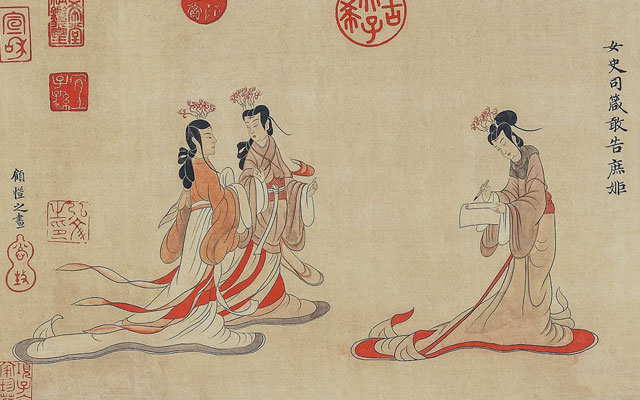 The painting is by Gu Kaizhi, a famous painter in the Eastern Jin Dynasty, and its painting of a lady with a vivid appearance and a skirt swaying, most importantly, it provides us with a reference to the clothing of the time. 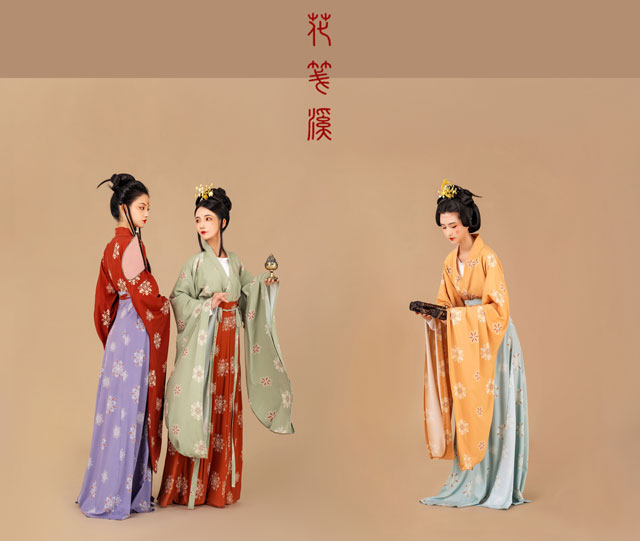 Take this series as an example, the classical color scheme is the basis of the design, "date red and light purple", "yellow and azure", "date red and bean green" are all very traditional color schemes. The top is paired with a simple design "big sleeve top", although the sleeve hem is large, the whole is only decorated with prints, not to make people feel complicated.

The design of this top collar is relatively low, because the folk style of this period is more open, so we also need to take a cotton "curved collar shirt" inside, the color choice of white is the most versatile. 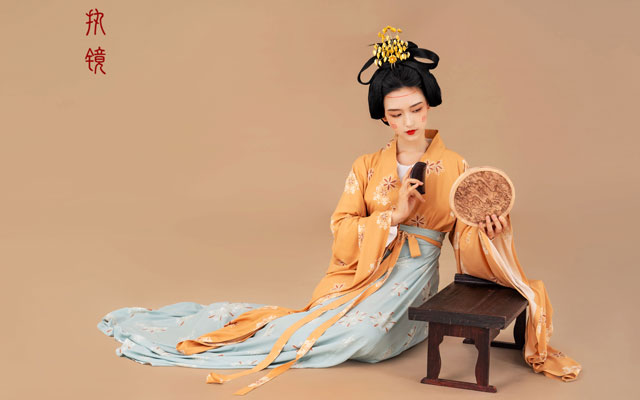 The lower body with a "Po skirt (破裙)", the skirt does not have too many pleats, so the advantage is very slim. In addition, the skirt for the high waist design, wear very thin.

The entire outfit is decorated with prints, good sameness, high fit, and very natural with it. 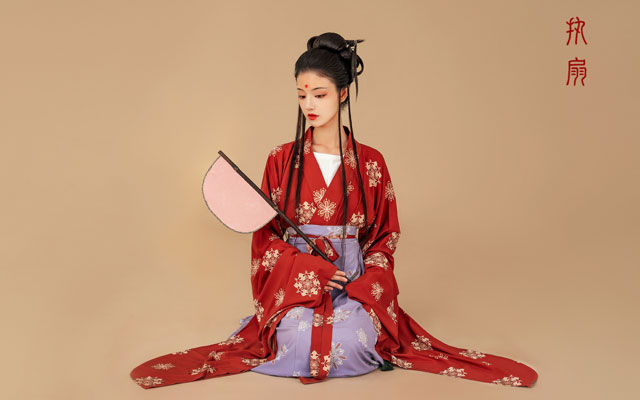 With the makeup of the Northern and Southern Dynasties period 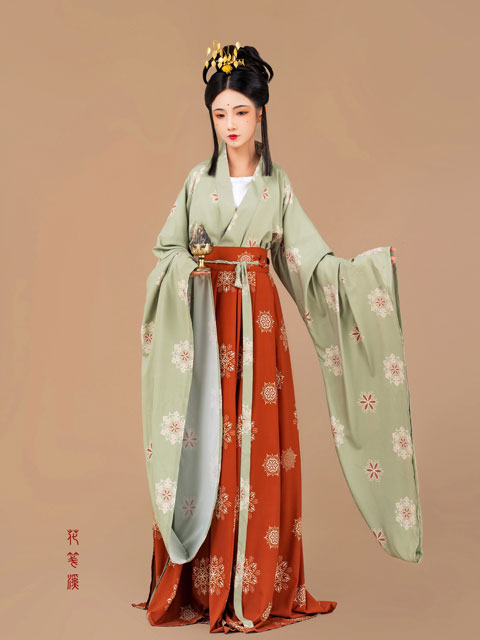 Mian Yan makeup (面靥妆), plum blossom makeup, Yun Hong makeup (晕红妆) and Ehuang makeup (鹅黄妆) are very representative, and keep in mind that the Northern and Southern Dynasties period was beautiful in white, and an even and clear base makeup is essential. 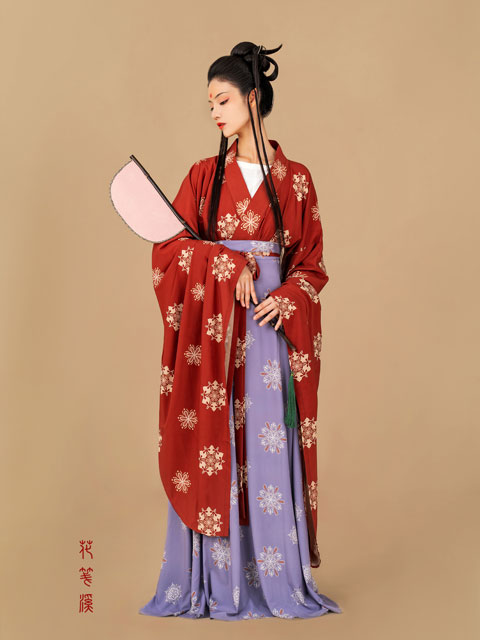 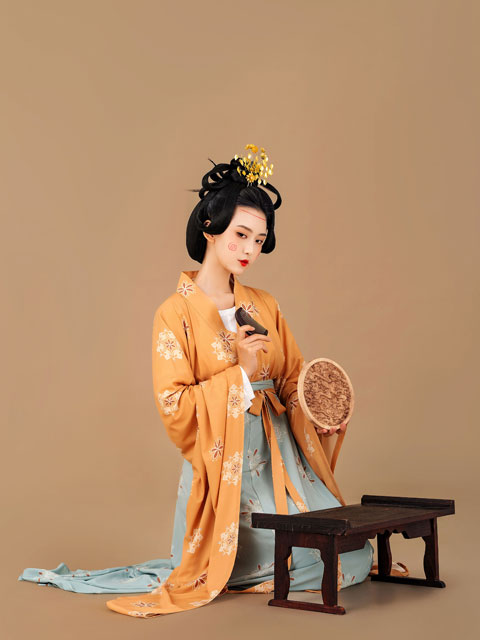 The lip shape should also be painted smaller, fan-shaped is more classical and temperamental. Then, the classical atmosphere full of makeup is presented. 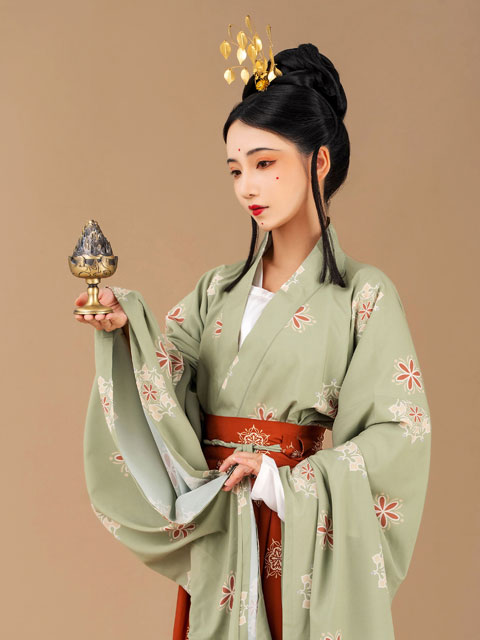 The above is the introduction of the Northern and Southern Dynasties hanfu and the recommendation of matching. More about different dynasties hanfu can be found here.