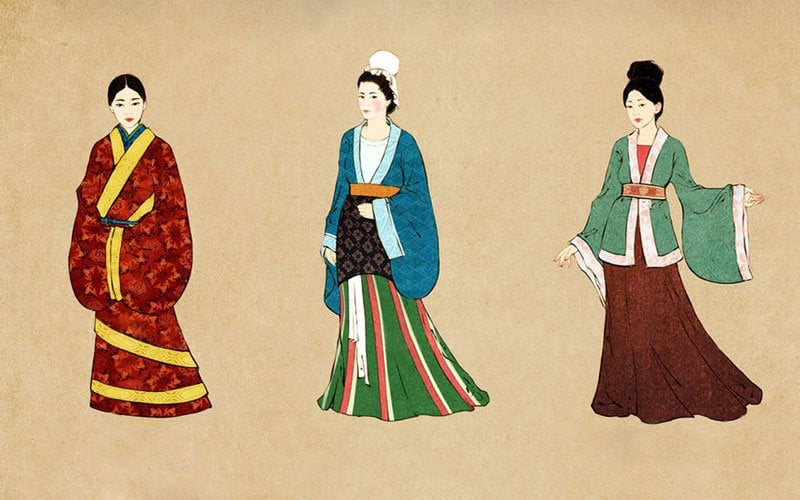 Hanfu, as the traditional clothing of China, appeared as early as 5000 years ago in the Huaxia period. And until the Han Dynasty, uniform dress standards were established, and Han Fu clothing officially became the basic style clothing for the ancient Chinese people. The Han Dynasty clothing developed rapidly in this period and had a great influence on the history of Chinese dress.

Each China's dynasty has its own memorable culture. Han dynasty, for the first time, costume design and color use have become unified, making traditional Chinese clothing an extremely important part of Chinese culture and a great work of art. 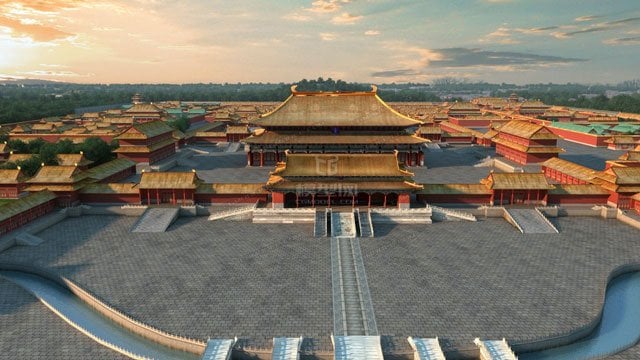 Actually, throughout China's history, clothing style experienced a notable changing from ancient times to the modern era. Spanning over four centuries, the Han period is considered a golden age in Chinese history.

The Han dynasty is a long history, but the Han dynasty clothing retained its simple and elegant style. So, let's through this short article to explore that fascinating history.

The Han dynasty was the second imperial dynasty of China, preceded by the Qin dynasty (221–206 BC) and succeeded by the Three Kingdoms period (220–280 AD). To this day, China's majority ethnic group refers to itself as the "Han People", and the Chinese characters are called "Han Characters".

The term Hanfu apparel was originally recorded by the Book of Han, which refers to the Han dynasty's traditional dresses. Hanfu (literally: "Han clothing"), also known as Hanzhuang or Huafu. Afterward, people use this Chinese mandarin word - Han Fu, to define all of the historical costumes of the Han Chinese people.

In the Han Dynasty, the silk industry got great development, and with the influence of the large-scale expansion of ancient China's foreign trade, silk trade and export reached unprecedented prosperity. 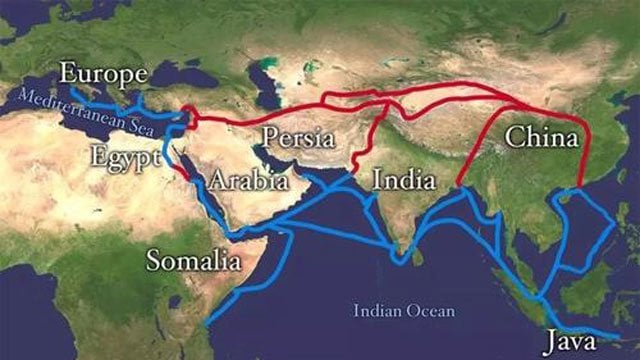 With the promotion of trade, the economic and cultural exchanges between ancient China and its East and West neighbors have further developed, thus forming the famous "Silk Road." These activities had an important impact on Han fashion clothing.

Mianfu Han's costume is the most formal dress in ancient China. It's a suit that ancient people wore when they attended the important ceremony. Mianfu is also the exclusive dress of princes and nobles. 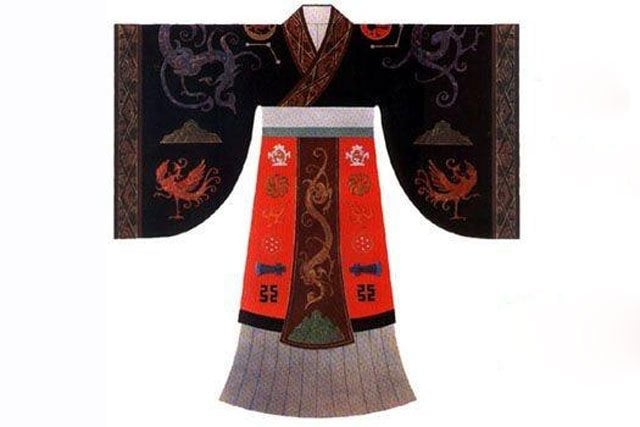 According to the importance of activities, nobles will wear different sets & Han dynasty shoes. Even the emperor who attends the occasion should wear the right dress.

Shenyi is an item of one-piece clothing, which is stitched from the top shirt and bottom skirt together, like a robe or overcoat, tightly covering the body. Its characteristic is to hide the body in clothes and keep elegant. Modern Chinese humanities scholars suggest that Shenyi should be promoted as a typical Chinese Hanfu to revive Chinese culture. 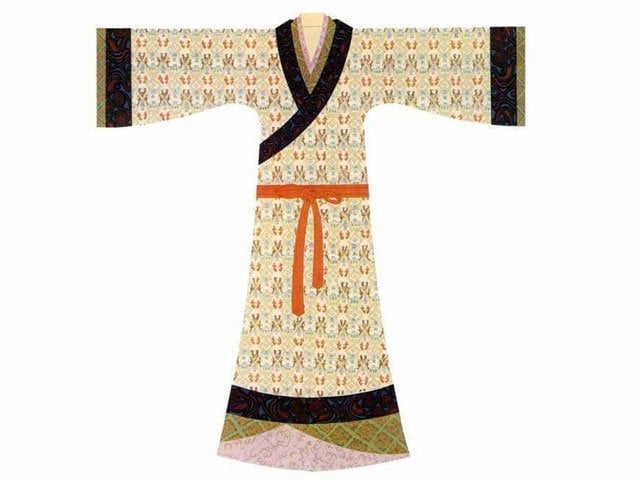 Shenyi dress is a kind of casual clothing, which can be worn by both men and women, patricians and plebeians. There are two most common styles: curving-front shenyi and straight-front shenyi.

Ruqun is one of the earliest and most basic costume forms in the history of Hanfu clothing. It was the daily dress of ancient people (especially women) until the Qing Dynasty.

Ruqun is actually a combination of two kinds of clothes. The short top shirt is called Ru, and the long skirt is called Qun, so it is a typical two-piece garment. 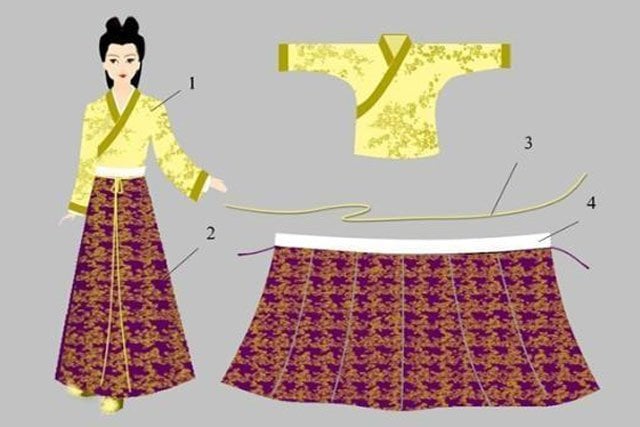 Compared with other Han's dress forms, ruqun has an obvious feature: the top is short, the bottom is long, and the proportion of the shirt and the skirt reflects the requirements of the golden section, which has a rich aesthetic connotation.

There are also male versions of ruqun. The biggest difference is that men's clothes are more simple in style and pattern.

Shuhe is a two-piece(including shirt and trouser) suit made of cheap ordinary cloth, as a casual outfit designed to facilitate work.

It is one of the daily clothes of the ancient common people, which originally refers to the rough clothes worn by poor people in ancient times. Later, it was improved in the Han Dynasty and became the most popular universal clothing for the people. 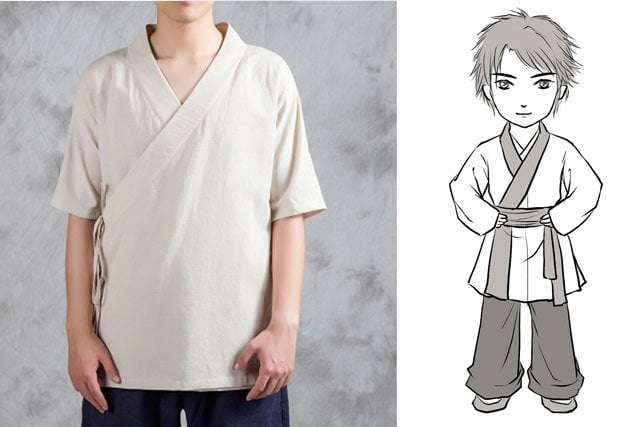 Because of its convenience, it widely used in folk activities, home leisure, labor, or martial arts military uniform(as training clothes). If you know Shaolin Kung Fu, that's what the masters wear.

Han is the main characteristics of service delivery from the right overlapping part of Chinese gown, not buttons, and using string binding, giving the impression of flowing free and easy. 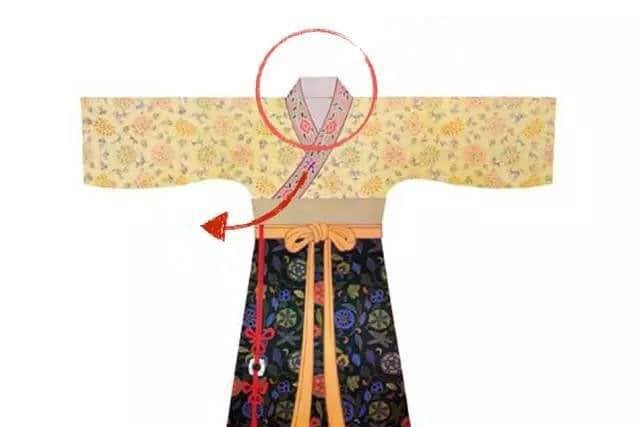 In the Han dynasty, the "Dark Style" was trendy, black, red, brown color is pretty common. Noble & elite class's dress in this period was mixed with multiple dark, for example, their formal dress usually made of more than three kinds of dark colors.

The general public will wear light-colored clothes, such as khaki, green, which is the original color of dress materials. 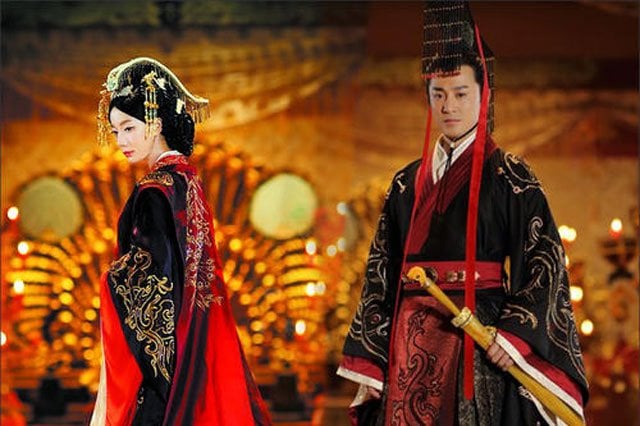 In daily life, The clothes worn by government officials and ordinary people are basically the same.

It's a good way to identify the position or rank of a person in society through the color and the quality of the materials used in clothing.

The patterns of clothing in the Han Dynasty are mainly mythical totems, such as dragon, tiger, phoenix, as well as astronomical patterns, like sun, moon, stars, and auspicious clouds, which are all particularly popular. 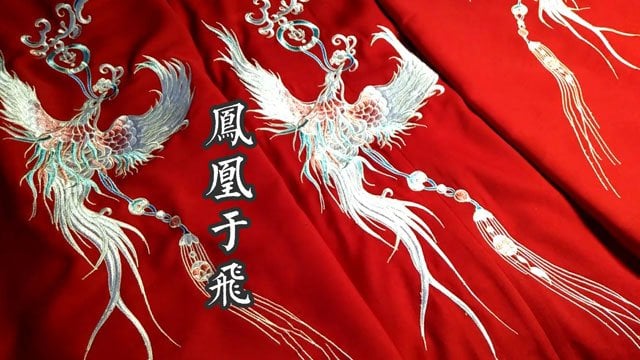 Another characteristic is that the pattern will be designed according to symmetry and geometry - a symbol of a stable social system. Overall, the design of this period is very classical and elegant.

The Influence of Han Dynasty Clothing

Hanfu got its official name in the Han Dynasty and determined its status as a traditional Han Chinese dress. From then on, hanfu ushered in its golden age. In the Tang Dynasty, Hanfu clothing starts flourishing - the development of hanfu once reached the peak. And in the Song Dynasty, the Ming Dynasty also developed a variety of excellent styles. 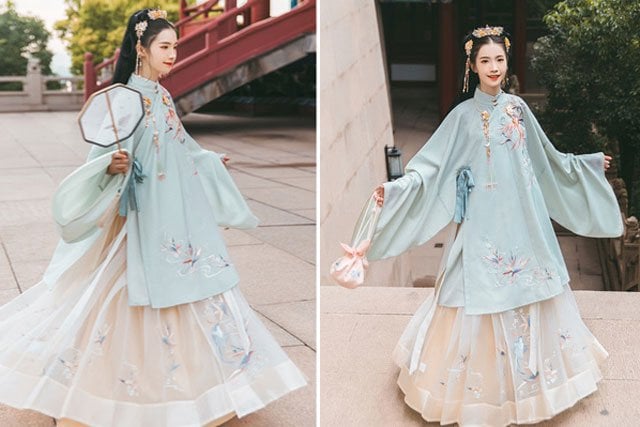 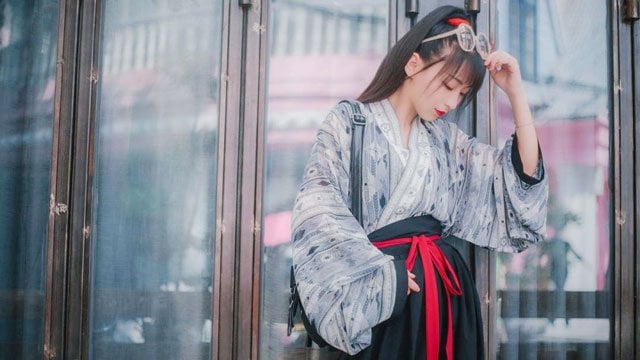 Hanfu has strong vitality, is undergoing a huge change. You will see more and more modern styles are being launched. It is an exciting time! Hanfu is moving to mass fashion in a whole new way.