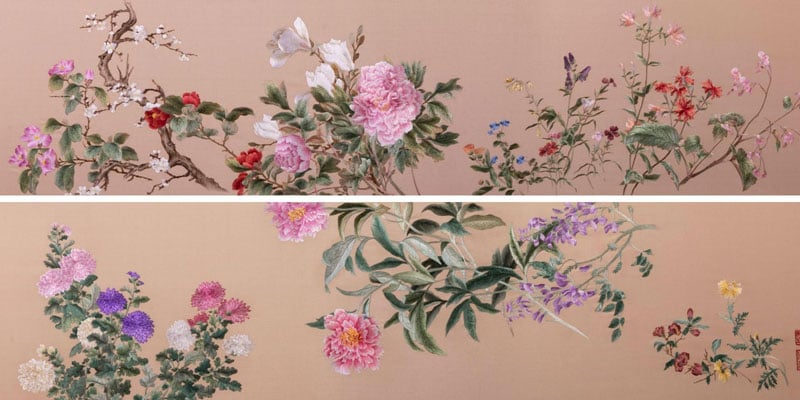 The oldest Chinese embroideries found date back to the Zhou dynasty (1027-221 B.C.) and may well be the earliest that ever existed.

However, very early embroideries have also been found in Egypt and Northern Europe, so it is not clear in which part of the world the art of embroidery actually originated - it may also have appeared in several parts of the world at about the same time.

It is, however, accepted that the Chinese invented sericulture and mastered the art of reeling the cocoons of the bombyx and spinning the silk from very early times. 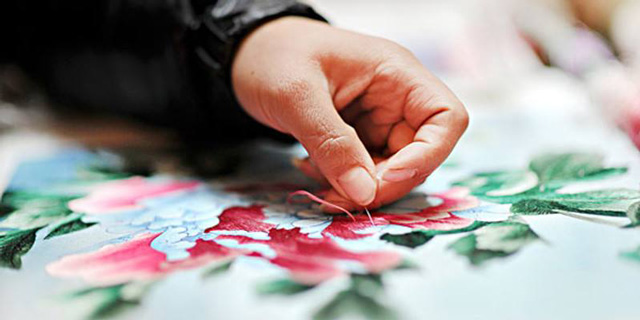 It is therefore not surprising that the ancient Chinese embroideries were made of silk. Strangely enough, embroidery in China was at first reserved for men, before they entrusted this task to the more delicate fingers of their women.

The earliest surviving example of Chinese silk embroidery is a ritual garment found in a tomb in Mashan, now Hubei Province, in the fourth century BC, during the early Taoism period (before the appearance of Buddhism in China).

However, if we are to believe the patterns drawn on this garment, it could just as well have been used to perform the rituals of a religion that predates Taoism.

This current, resulting from a mixture of religious and magical practices dating back to pre-imperial China (where the notions of Yin and Yang have their roots), having spread quite slowly across China.

The art of embroidery spread in China during the Han Dynasty (206-220). Four distinct styles or schools of embroidery developed at this time, but each did not reach its peak until much later.

Especially after trade along the Silk Road intensified. India, the Middle East, and Europe formed a new market for Chinese embroidery, and Middle Kingdom craftsmen set about meeting the demand for ever more refined and complex designs. 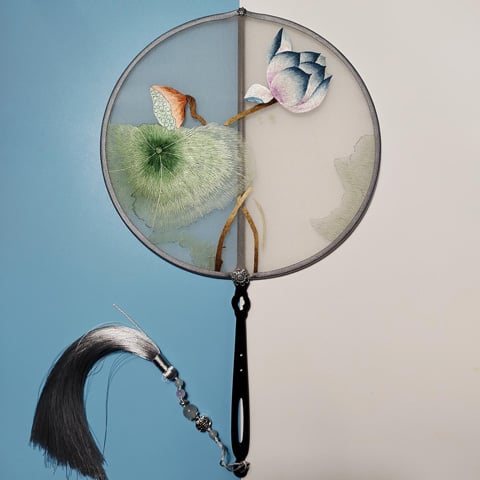 The four schools of Chinese embroidery have all been designated "Intangible Heritage of China".

The art of Shu embroidery 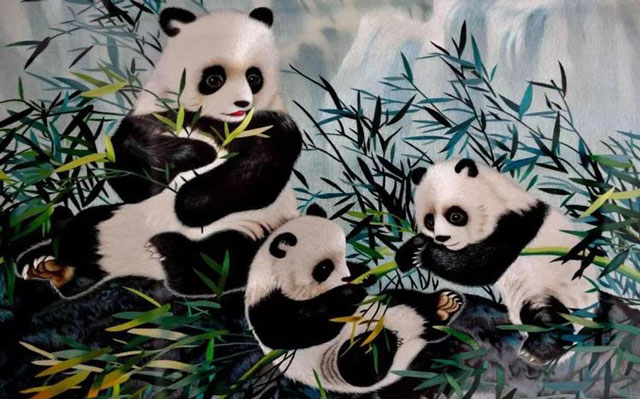 The most remarkable characteristics of Shu embroidery are as follows: 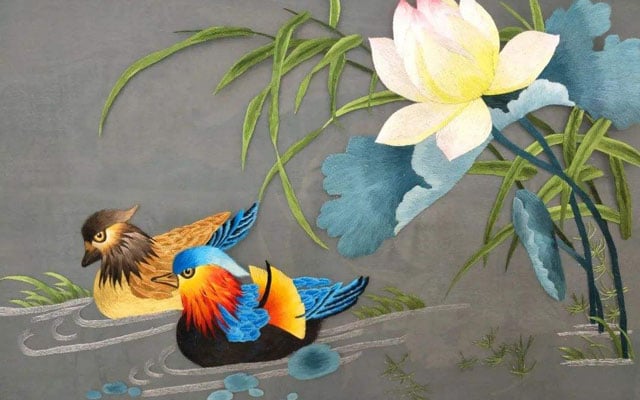 The art of Shu embroidery follows strict principles: according to the tradition of this school, there are 12 different ways of embroidery, which can be subdivided into 122 categories. Shu embroideries are usually made from soft satin pieces, which are still made in Sichuan today.

Comforter covers, pillowcases, tablecloths, chair cushions, scarves, and handkerchiefs are some of the most commonly embroidered items in the Shu style.

The art of Xiang embroidery

Xiang embroidery was born and developed in Hunan province.

This style of embroidery takes its name from the river that runs through the province (the term "Hunan" means "south of the lake": this province, as well as the style of embroidery associated with it, both have names inspired by water, a sign of the importance that rivers and lakes had in China in the past). 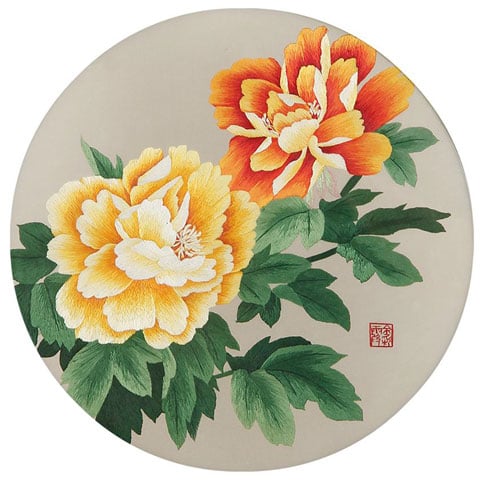 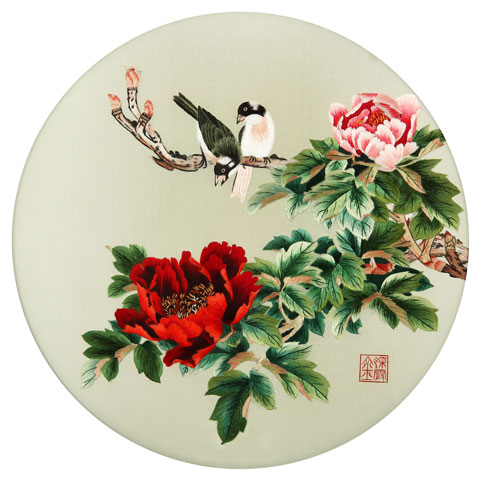 The most remarkable characteristics of Xiang's embroideries are the following:

Xiang's embroideries are unmistakably beautiful. More than the variety of colors, they emphasize the liveliness of the tones, which leads their detractors to criticize them for being garish. 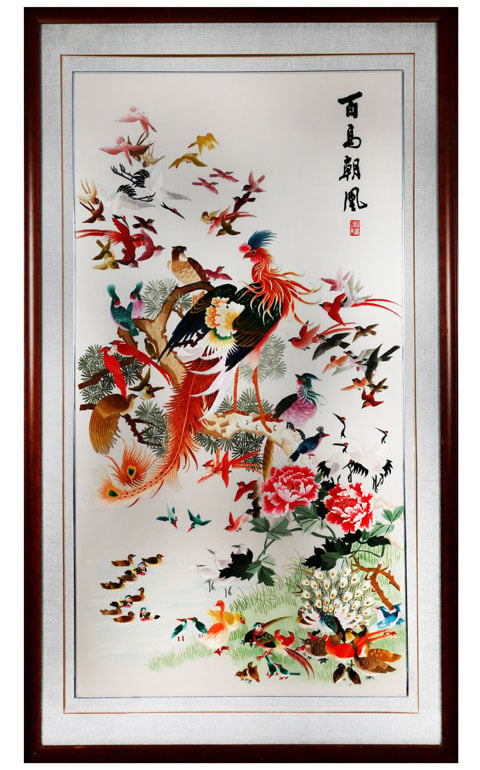 This style of embroidery prefers the delicacy of suggestion and complicated intertwined patterns to simple, brightly colored representations that emanate a mellow luxury.

Xiang's embroidery was very popular in China, especially in the late Qing Dynasty. They have also won numerous awards at international exhibitions, including Japan, the United States and, more unexpectedly, Panama.

The art of Su embroidery

Su embroidery takes its name from the city of Suzhou in Jiangsu province.

Unlike the other three schools of Chinese embroidery, this style of embroidery has two distinct periods: before and after the Ming dynasty. Very little is known about the art of Su embroidery before the Ming Dynasty, but it is believed that it was quite similar to that of other embroidery schools. 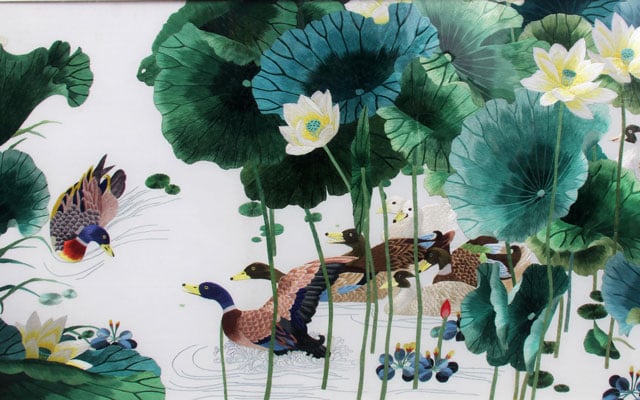 Towards the end of the Ming Dynasty, Su embroidery was influenced by both Japanese and Western art, which radically transformed it (the Japanese influence is not surprising, as Jiangsu is not far from the Japanese coast, while the Western influence probably came about as a result of the increased trade between China and the rest of the world).

The most remarkable characteristics of Su's embroideries are the following:

Su embroidery became so famous throughout China in the late Qing Dynasty that Suzhou was given the title of "embroidery city". They became the favorite embroidery of the Qing court, both for official costumes and for wall ornaments, such as tapestries. 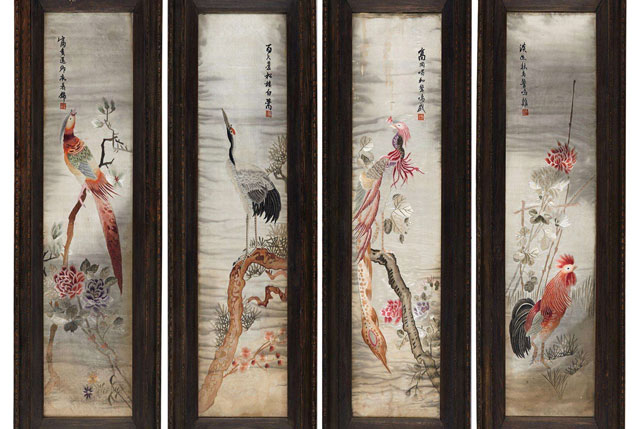 The Suzhou craftsmen were also the first to use gold and silver threads, which allowed them to create bright embroidery designs that were very popular, especially at court.

Su's embroideries are still very popular. Today, they are used not only on clothes and tapestries, but also on many other items, such as handbags. Their quality has been recognized many times at international exhibitions.

The art of Yue embroidery

Yue embroidery, sometimes called Cantonese embroidery, is a traditional art of Guangdong, the southernmost coastal province of China (Canton area, which was an important part of China in the colonial period).

Some believe that Yue embroidery is the oldest school of embroidery in China, but there is no solid evidence to support this assumption. 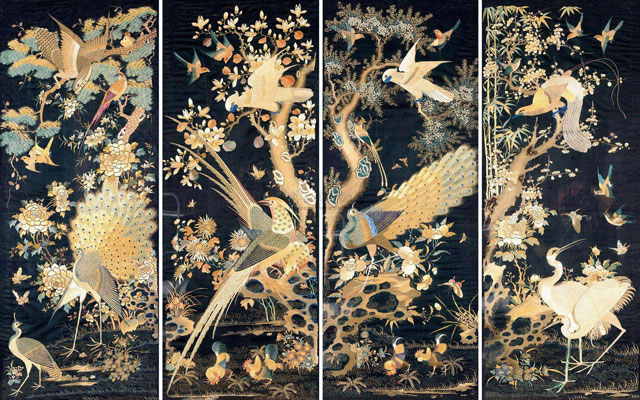 Historical documents tell us that the earliest Yue embroidery was made with peacock feathers twisted into a thick, cord-like thread and with horsehair, which was used to mark the spaces for the different colors, thus making the designs more distinct.

These two materials are still used today, but more to produce an ornamental effect, occasionally, than in a systematic way.

Yue embroidery does not really have any specific characteristics. It is considered the most eclectic of the four schools of Chinese embroidery, and combines various elements from the styles of the other three schools. 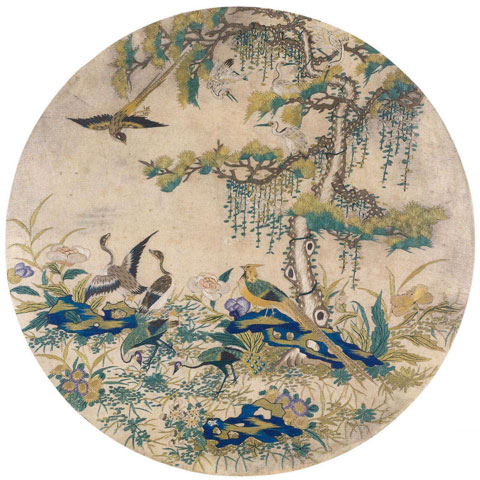 Nevertheless, it can be associated with the following characteristics:

Yue embroideries are as richly colored as those of other Chinese embroidery schools. They are particularly appreciated by Chinese expatriate communities around the world, including those closest to them geographically, such as those in Hong Kong and Macao.