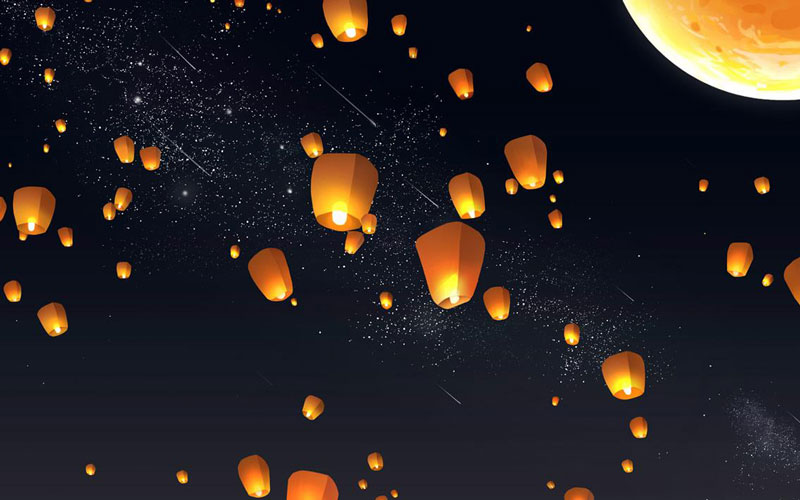 Chinese inventions are great achievements for socio-economic development and scientific and technological progress, both in China and worldwide.

But China also contributed other creations, not so outstanding, but no less ingenious, which have not lost their sense of usefulness with the passage of time.

Today, let's witness the wisdom and intelligence of the Chinese.

The abacus evolved from the token calculus in Cheng Dawei, Ingenious Inventions of Ancient China.

About 2,000 years ago, Chinese ancestors mastered simple calculation with counters. In the Spring and Autumn period, mathematical calculations were made using tokens of various colors and values.

However, with the socio-economic progress of mankind, this type of calculator no longer met the growing demand. Thus the abacus was born. 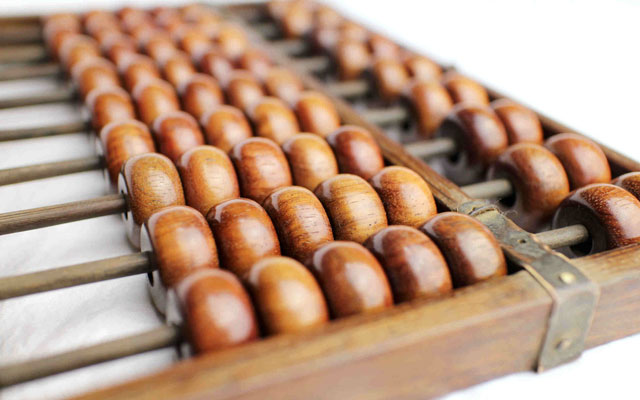 The principles for the use of this device are similar to the calculation with counters, but are more advanced, faster and easier than the former.

The term for the use of the abacus is called in Chinese "Zhu Suan" (Bead Calculation). Its earliest historical record is in the book "Shushu Jiyi" (Documents on Mathematics), created by Xu Yue (?-220), a mathematician of the Eastern Han dynasty in the EL century.

In the drawing "Qingming Shanghe Tu" (Scenes by the River on the Feast of Pure Clarity) by Zhang Zeduan (1085-1145), a famous painter of the Northern Song dynasty, there is an abacus on the counter of a pharmacy. 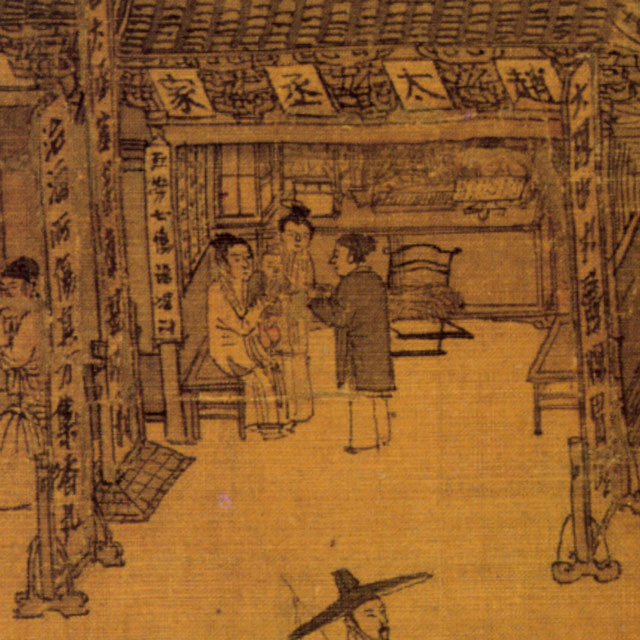 The Yuan Dynasty writer Tao Zongyi (1316-? ) mentioned in his diary for the first time the word "Suan Panzhu" (Abacus Beads), and said that "They can be moved by touching them'.

In the "Lu Ban Mu Ji" (Classic on Lu Ban Carpentry) of the Ming Dynasty, there is mention of numerous models of abacus, with the technical specifications of its manufacture, which shows that at that time the use of calculation was widespread among the people, and that even the illiterate knew how to handle it.

Historical records show that abacuses of various types were made in many countries and regions of the world, but the Chinese abacus has inherited the basic features of token calculation, and has its own characteristics: the signs of nine numbers and the concept of zero, the positional numbering system and the decimal system, and the same ways of representing the nine numbers and zero. 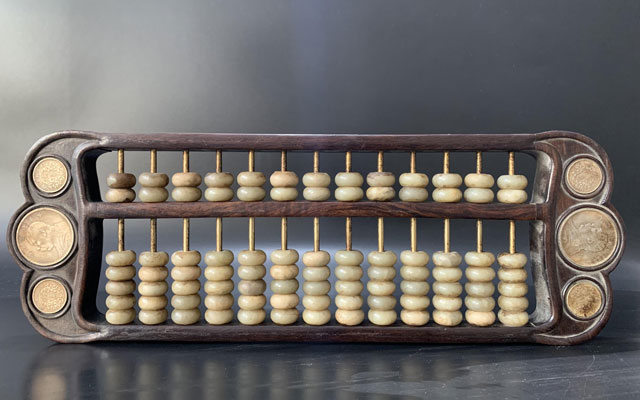 Subsequently, the Chinese abacus spread to Japan, the Korean peninsula, India, the USA, and the countries of Southeast Asia.

Today this device is still used in everyday life as a calculating instrument, superior to electronic calculators in the basic operations of addition and subtraction.

China is the homeland of "Weiqi" (or Go), in ancient China it was also referred to as "Yi".

According to mythological legends, more than 2,000 years ago, Emperor Yao designed this mental sport to teach discipline, concentration and balance to his children.

Already in the Spring and Autumn period "Weiqi" was very popular, and even more so in the Warring States period. 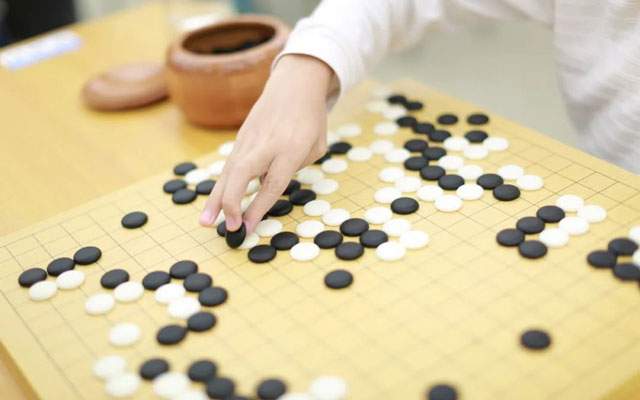 Go is played on a grid of 19 vertical by 19 horizontal lines, which form 361 intersections. It consists of a total of 360 intersections divided into four zones, each of which covers 90 knots of two lines, which means four seasons and the number of days in each quarter.

On the board, players strategically place black and white stones (tiles or pieces made of hard materials), whose colors symbolize the Taoist concept of "Yin" and "Yang".

Likewise, nine thick points are distributed on the board as centers for nine different areas, resembling an astrological distribution. The competition between two opponents shows the infinite changes of the Universe. 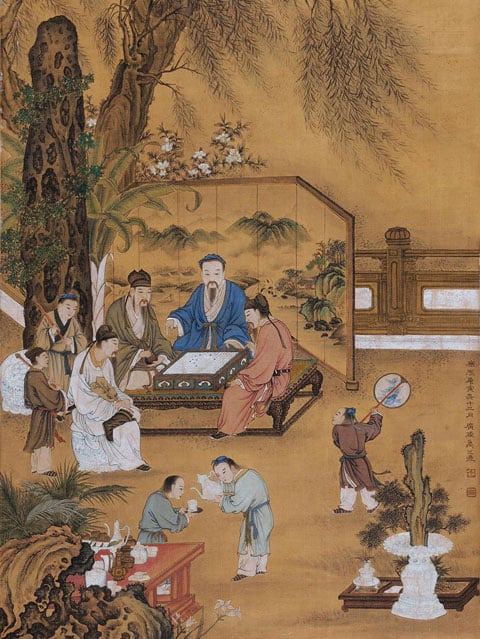 Ma Rong, a writer of the Eastern Han dynasty wrote in his work "Weiqi Fu" (Ode to Weiqi): "In the game of Weiqi, the rules of military strategy apply. The board resembles a battlefield, where two players deploy their black and white troops.

Only those who have intelligence and are not afraid of losing and do not rest on the laurels of victories, achieve the final triumph." Those verses synthesize the tactics and strategies of the "Weiqi'' game.

A good competitor of this game should not be conservative and reckless, but courageous and cautious. Many prestigious masters of "Weiqi" were emperors, military generals and celebrated politicians. 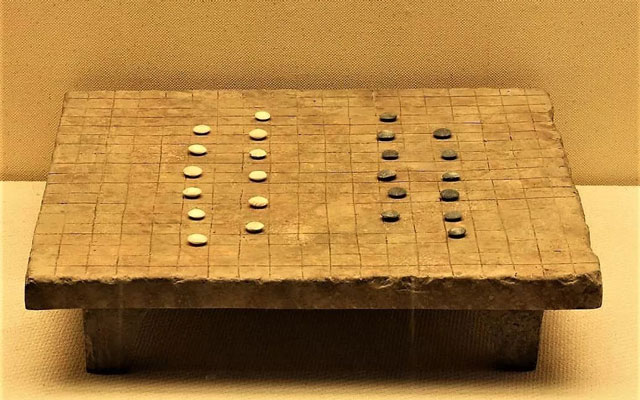 For example, Cao Cao, a great military and political strategist and poet of the Three Kingdoms period, and Emperor Xuanzong, of the Tang dynasty.

The board remains unchanged today, as do the tiles and rules of "Weiqi", about which many books and manuals have been written.

According to historical records, "Weiqi" was introduced to India and Nepal around the time of the Eastern Han dynasty, and then to Japan and the Korean peninsula. It has now become widespread throughout the world.

The "Huainan Wanbishu" (Compendium of Ten Thousand Physical Techniques of Huainan) compiled in the 2nd century B.C.E., records a legend about a game in ancient China called "Jizifei" (Flight of Empty Eggs).

The game consisted of removing the yolk and white of an egg through a hole in the shell, and then placing a piece of burning wormwood in the hole. When the air inside the shell was heated, the empty egg could be blown out. 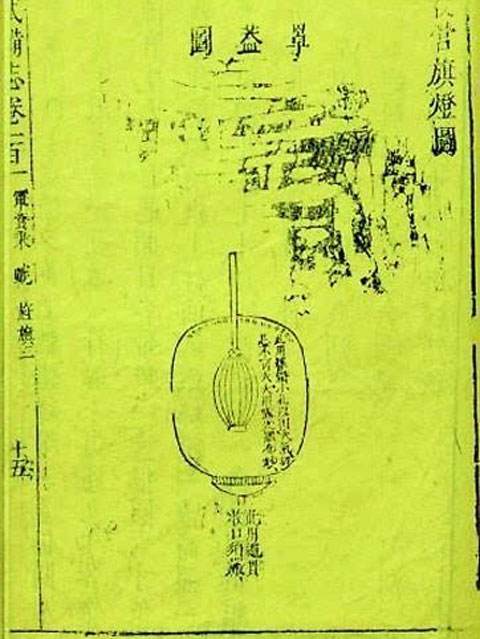 The principle of this game is correct and imaginative, which shows that there were already people who had realized how light the hot air could be.

This game can serve as a precursor experiment, like a mini-aerostatic balloon, but without going that far, because the hot air in the empty egg does not have enough force to lift the shell.

However, with a large "shell" this theory can become a reality. According to historical documents, the inventor of the hot air balloon was Zhuge Liang (181-234), a politician and military strategist of the Three Kingdoms period. During the crusades against the Kingdom of Wei, the commander fell ill due to excessive workload.

Before his death, to confuse enemies, Zhuge Liang designed a paper balloon that could rise by placing hot air inside with an oil lamp.

After Zhuge Liang's death, his troops launched the balloons which intimidated the enemy, thinking that some spirit was helping the rivals. Later, this lantern was named "Kongming Deng" (Zhuge Liang was also known as Zhuge Kongming). 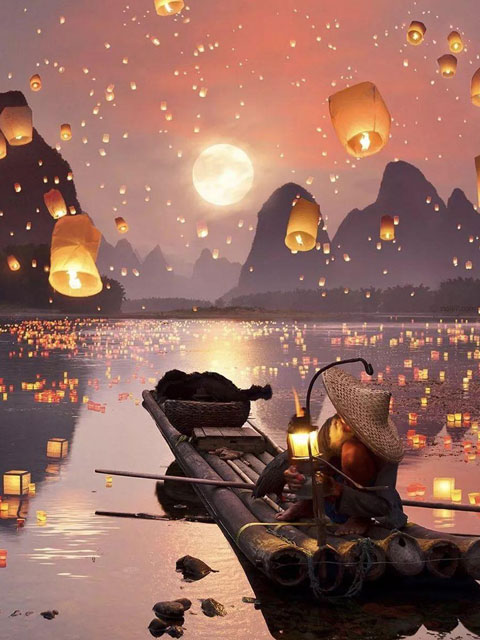 In the Five Dynasties period, a lady named Xin Qiniang made a large-sized "Kongming Deng" using pine resin as a combustible material to heat the air. Therefore, the "Kongming Deng" was also christened as "Songzhi Deng" (Pine Resin Flying Lantern).

The great Song dynasty poet Fan Chengda described the "Kongming Deng" in his verses, "The lit candles were shot into the air and there they remained". In the Yuan Dynasty, Kongming lanterns were very popular in the country.

They used to be thrown at traditional festivals and important dates. Joseph Needham pointed out that the Chinese had invented paper a few centuries before other nations of the world* This invention led to the traditional Chinese-style lanterns, which had a small hole in the top. This made it easier to heat the air in a limited space, so that, on some occasions, the lanterns could ascend and glide in the sky. 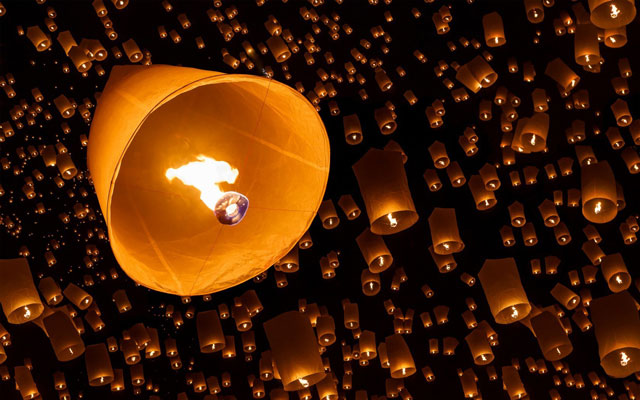 The Chinese were the first people in the world to learn about the confrontation between the buoyancy of air and the force of gravity. About 4,000 years ago, the ancient Chinese made the most primitive parachutes, the principles of which resemble modern parachutes.

According to the "Shiji" (Historical Memoirs), in the patriarchal era of China, Shun, a famous and legendary monarch, was mistreated by his father, a blind old man.

Once, when Shun was working in a high granary, his father set fire to the building, trying to kill his son. Suddenly enlightened, the heir jumped from the top with two round bamboo hats in his arms. This may have been the first attempt to harness the buoyancy of air. 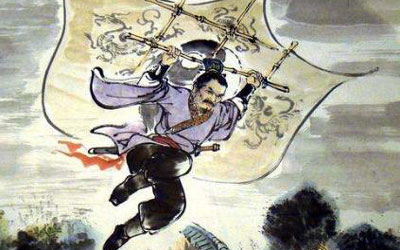 Yue Ke (1183 -1242), grandson of the famous military general Yue Fei (1103-1142) of the Southern Song dynasty, noted in one of his essays that in the southern Chinese city of Guangzhou there was a mosque, on the roof of which a large golden rooster was placed. One day they discovered that a leg of the figure had been stolen by a thief.

After being caught, the criminal confessed that, in order to escape, he had thrown himself off the roof with two umbrellas without handles.

On that occasion, this protective utensil from the rain served as a parachute. In the 17th century, the French ambassador to Thailand, De La Loubere, wrote in his book "Historical Relations" how Chinese acrobats used parachutes in shows: "An artist with two parachutes on his belt jumps up and down passing through a large iron circle. Sometimes the wind drags him to the ground, into the branches of a tree, or the current of the river."

According to archaeological discoveries, 20 thousand years ago, already the Chinese knew how to use a bow and arrow.

A complete and practical archery module must meet three conditions: a bow so powerful that it can shoot arrows over a long distance; arrowheads so sharp that they can kill; and a technique so excellent that it ensures the stability of the arrows in flight. 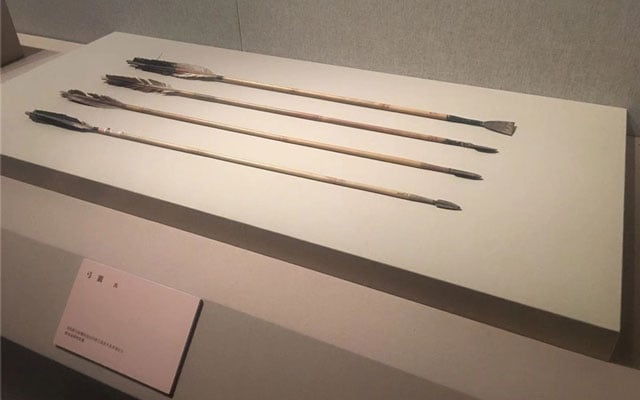 The bows and arrows of ancient China more than met these requirements. In a Paleolithic relic from the province of Shanxi, many arrowheads made of stone, exquisitely crafted and remarkably sharp, were discovered ready to be mounted on a shaft.

As they were usually made of wood or bamboo with animal sinew string, the bows were able to stand the test of time. 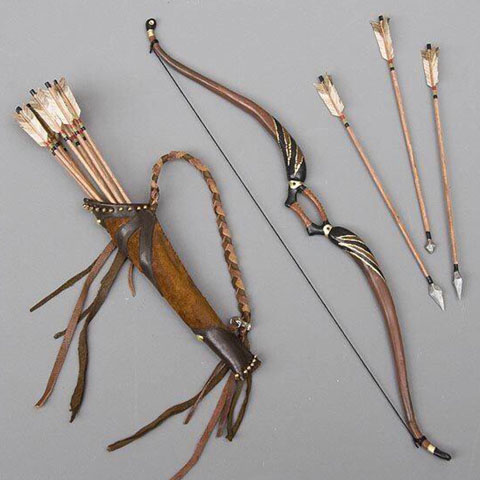 Regarding the guarantee of the stability of the arrows in flight, the "Kao Gong Ji" (Records on Craftsmen's Examinations), the oldest Chinese scientific and technological work, indicates in the chapter "Shi Ren" (Archer): "Decide the proportions of the shaft to install the feathers. At the end of the shaft, three feathers are installed in different directions. The tips are mounted at the front.