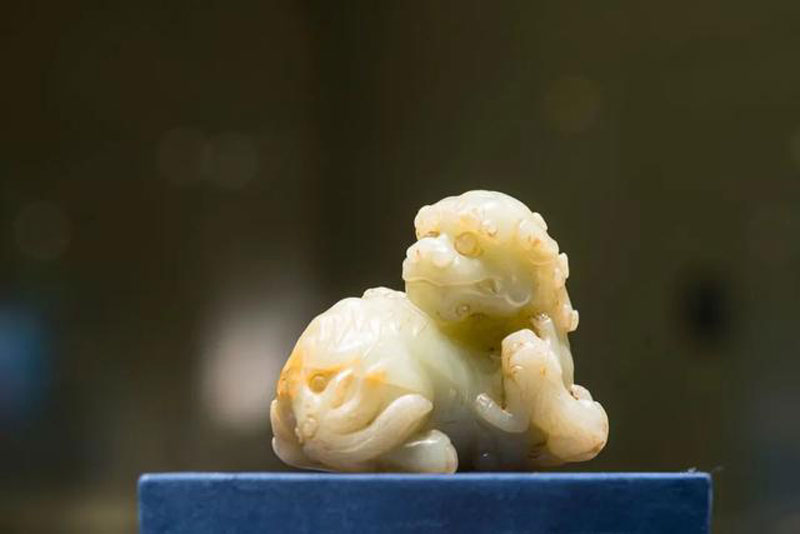 Chinese sculpture is an art form that has been closely linked to Chinese funerary rites since ancient times. Throughout history, the symbolic protection of important tombs or imperial pantheons by means of life-size or large statues can be seen.

In addition, small sculptures of objects, characters and productive activities were also buried in the tombs to accompany the deceased in the afterlife. The introduction of Buddhism meant an enrichment of styles and volumes and the appearance of the first religious and monumental sculptures. 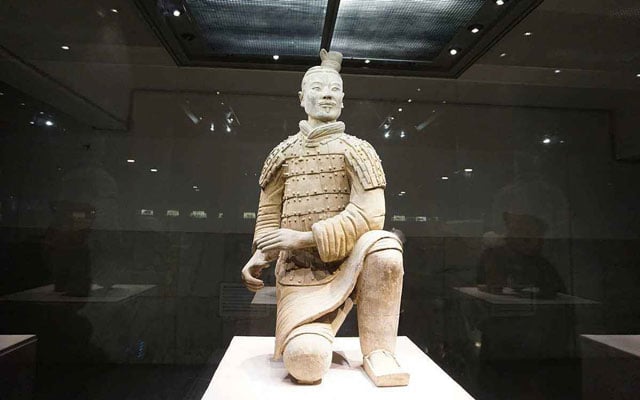 The most famous funerary statues are the life-size terracotta warriors of Xi'an, guardians of the tomb of the First Emperor. Then there are the large stone statues of the "Spirit Way" leading to the Ming tombs in Beijing, In all these cases (like the Han and Tang tombs of Xi'an and the Ming tombs of Nanjing) there are representations of real or fantastic animals, guardians or solicitous officials. 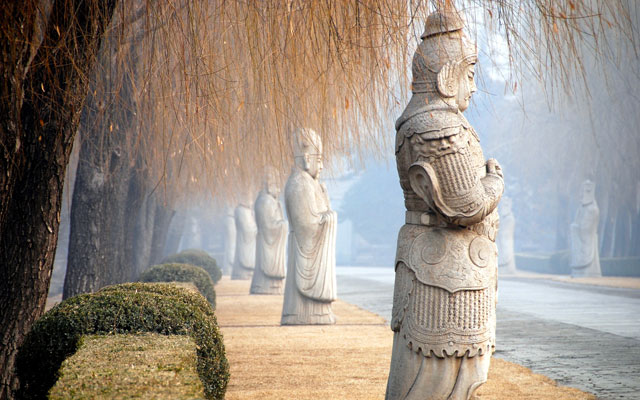 As for the grave goods, the Neolithic finds have shown the oldest Chinese sculpture known to date: small zoomorphic or anthropomorphic bone and wood objects, jade pieces (discs or human and animal figurines). From the Shang onwards, the latter were found in the tombs of princes and high-ranking personages.

From the Han period onwards, statuettes depicting everyday life began to be placed next to the deceased, which shed much light on the way of life of the time.

Among the many examples are the figurines from the Han tomb of Xianyang: a miniature army of some 2,500 statuettes. Figurines of elephants, horsemen, musicians, officials and minstrels have been found in Tang tombs.

Buddhist sculpture gave new inspiration to artists. It was born in India and came to China with the caravans from the north or by sea from the south, brought by merchants, missionaries or pilgrims who had come to India.

The first statues of Buddha served as a model for the creation of more and more sinified ones. Face, clothing, ornaments and positions of hands and feet gave rise over time to an original type, amplified by its gigantic dimensions. 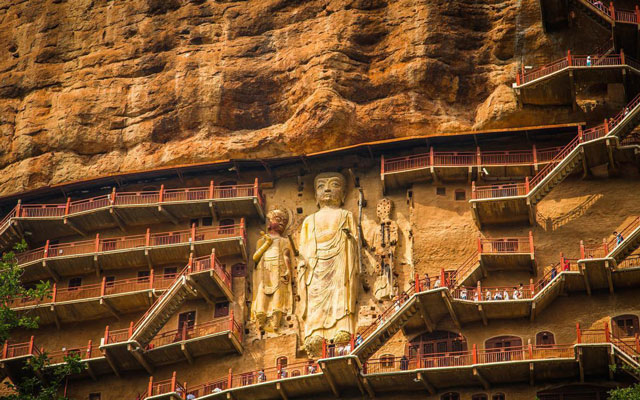 Among the characteristics of the first Chinese Buddhist statues, the elongated shape of the head, the rigid and schematic clothing, the vigorously drawn features of the body, the enigmatic smile; in short, a certain hardness that symbolizes the high spiritual level that the artist wanted to represent.

In the Sui and Tang periods, with Buddhism already completely assimilated by Chinese culture, the morbidity of the reliefs increased, with fuller and softer forms, more sumptuous clothes and more benevolent faces; even the warrior statues of the Buddhist pantheon acquired expressive gestures.

Some Chinese Buddhist sites are famous for their monumental statues (the Dunhuang and Luoyang grottoes or the famous Buddha on the river in Leshan, Sichuan). 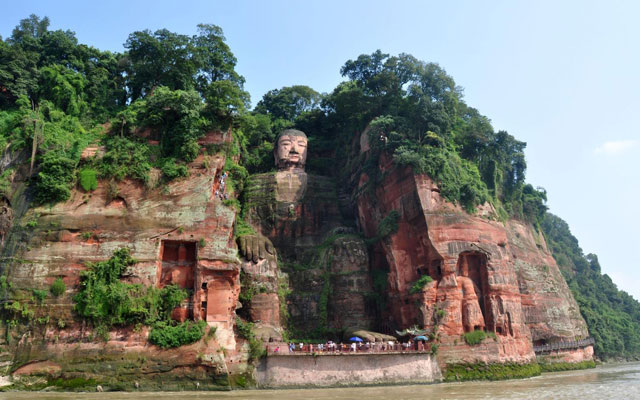 These are authentic Buddhist cities excavated and carved into the rock, with many figurines in the grotto of the "thousand Buddhas" and gigantic sculptures on the slopes of the mountains. As for the typology, it is very frequent the triad composed of Buddha and two Bodhisattvas as the central nucleus of the place or temple or the four Guardians and 18 disciples.

In relation to the representations, there is a particular characteristic in Chinese sculpture: the figures always appear in frontal position, without being able to surround them.

It is particularly evident in the large cave sculptures, which seem to form a body with the mountain and whose back cannot be seen, and also in the free-standing figurines with a smooth part of the body, which give the impression of being formed by halves sculpted separately. 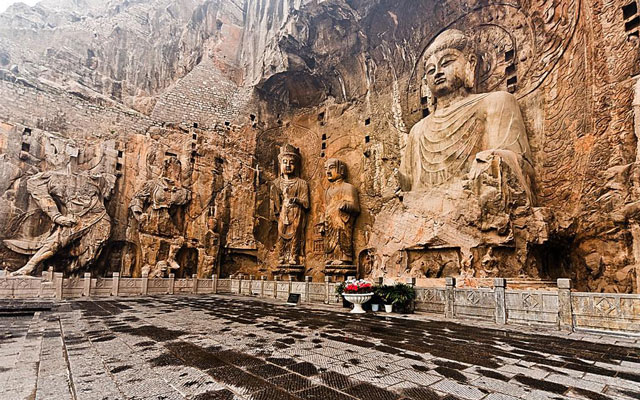 The frontal representation obeys the geomantic conception of aligning with the forces of nature without confronting them.

The sculpture and the inscriptions on the stelae deserve special mention: a large number of them have been preserved, with writing that is sometimes tiny but always harmonious and legible, testimony to a high degree of technical and artistic refinement.

Jade is the most precious stone in China and one of the first art forms that reached a high level.

According to the Chinese creation myth, when the god Pan Gu died, his breath became wind and clouds, his muscles became earth, and the marrow of his bones became jade and pearls. The Chinese value the stone both for its beauty and for the magical powers attributed to it.

In ancient times, jade was used for religious and ritual purposes, and later came to be used for decorative and other aesthetic purposes. The oldest jade finds discovered so far are from the Neolithic Hemudu culture, around 7,000 years ago, and appear to be ritual objects.

Numerous circular discs called bi have been found, which were placed on the dead to be taken with them. The round discs represent the harmony between heaven and earth. Even today, many Chinese adorn themselves with such discs.

Jade was believed to have the power of preservation, so burial clothing was made of this precious stone.

The Han dynasty saw an early heyday of jade carving. During the Han dynasty, the bodies of high court dignitaries were dressed in robes made of more than a thousand thin jade plates bound with gold cord. The Museum of History in Beijing displays the jade robe of Prince Liu Xiu, who died in 55 B.C.

The jade is said to glow with the vitality of its owner. If the possessor becomes ill, for example, the jade tarnishes. Jade brings good health, luck and protection. Jade is not a pure mineral, but an amalgam of two minerals, jadeite and nephrite. 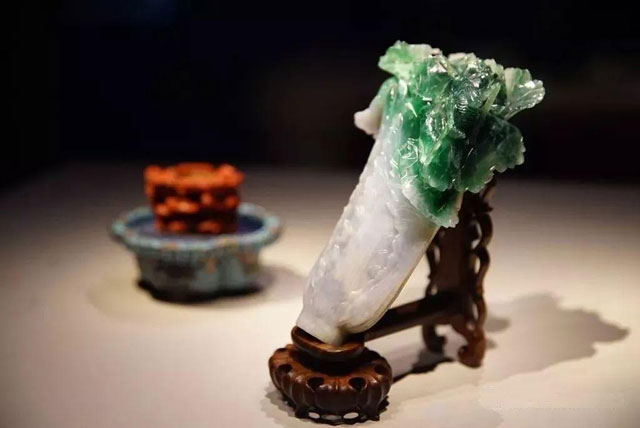 The former is more valuable because of its translucency and hardness, as well as rarity. Nephrite is very similar to jadeite, but is not as hard. Its colors vary from white to green, but black, brown and red jade can also be found.

The Chinese value above all the clear and emerald green stone. Jade is a very difficult material to work because of its hardness. According to the jade carving workshops in China today, there are approximately thirty kinds of this stone. The most prestigious jade workshops are those of Hetian (Xinjiang province), Shoushan (Fujian province), and Luoyang (Hunan province). 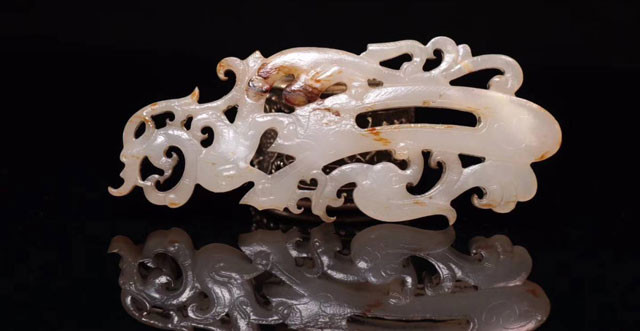 In government stores, the authenticity of jade can be trusted. In the market and in private stores, on the other hand, a number of precautions should be taken. Genuine jade is cold and cannot be scratched with a knife. The quality depends on the feel of the stone, its color, transparency, design, and other factors. (However, if in doubt, it is best to consult an expert)

A Brief History of the Chinese Civilization Development