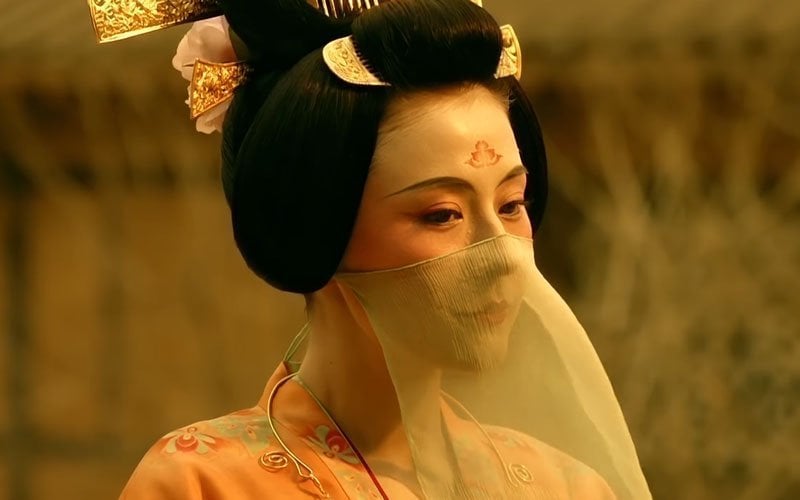 Let's see who is the most fashionable in Chang'an.

The main features of this dress are short clothes on the upper body and long skirts on the lower body. Some of them wear silk shoulders around their arms. Others wear half-arm outside the gown and then wear silk. 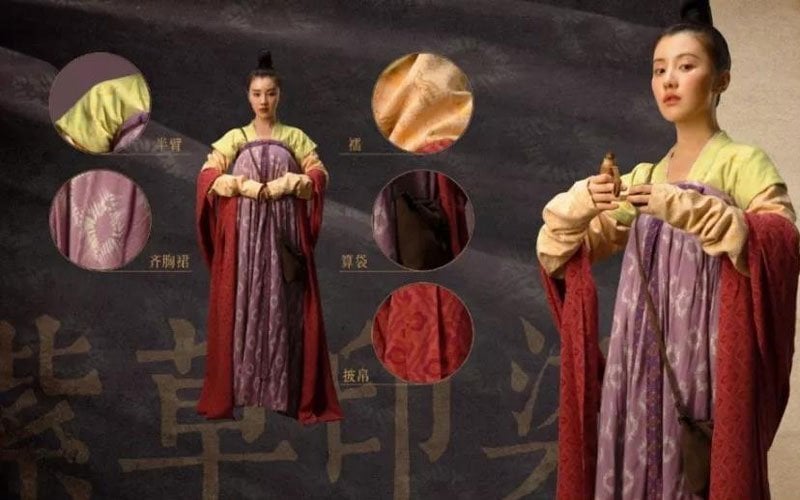 "Ru (襦)" is for internal wear, sleeve length, upper and lower shorter, just to the waist. Long skirts were the clothes of women in the Tang Dynasty, most of which were made of silk. Skirt waist is high, can hide the chest, outside shoulder put on a yarn shirt, can make upper body skin half-covered, there is a kind of vague aesthetic feeling.

Banbi (半臂) is a short-sleeved shirt, sleeve length to the elbow, knotted in front of the chest, shirt length to the waist, can be tied in the dress, can also be outside the dress.

Silk shawl (披帛) is a rectangular scarf made of thin yarn, with a slightly wide banner, about two meters long. It is wrapped around the shoulders like a scarf, from the arms to the front of the body, and falls to the knees. The Silk shawl increases the feminine body posture's soft and dynamic feeling and makes the clothing have a unique artistic conception of beauty. 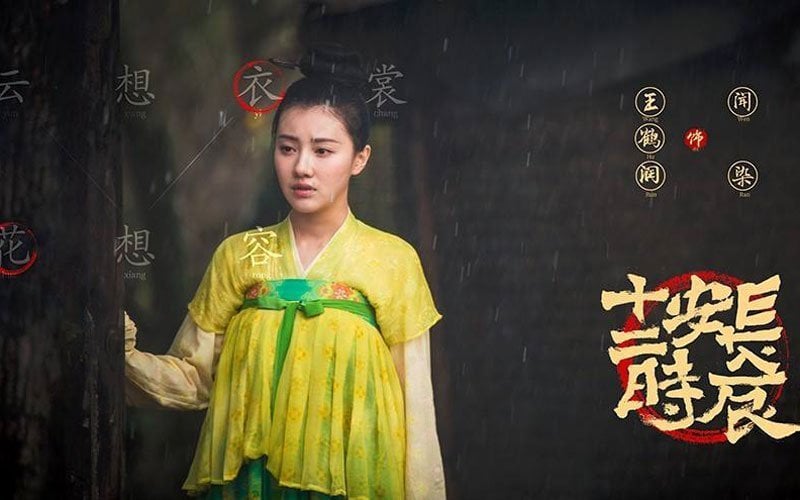 Ruqun runs through the whole Tang Dynasty, and its style varies in different periods.

In the early Tang Dynasty, the upper body was mostly light yellow or beige, with a white shawl, and the lower body was wearing a light red dress with a white bottom. The dress was covered with a green yarn dress. The design of the skirt was also dominated by plants and flowers, creating a natural, fresh, and bright feeling. More conservative, advocate slim.

In the flourishing Tang Dynasty, the waistband began to move down and the area of the forechest increased. At the same time, there are some changes in the color of women's skirts. The skirt color is used to bright red, green, and other rich colors. The patterns are colorful, and the materials are more luxurious. 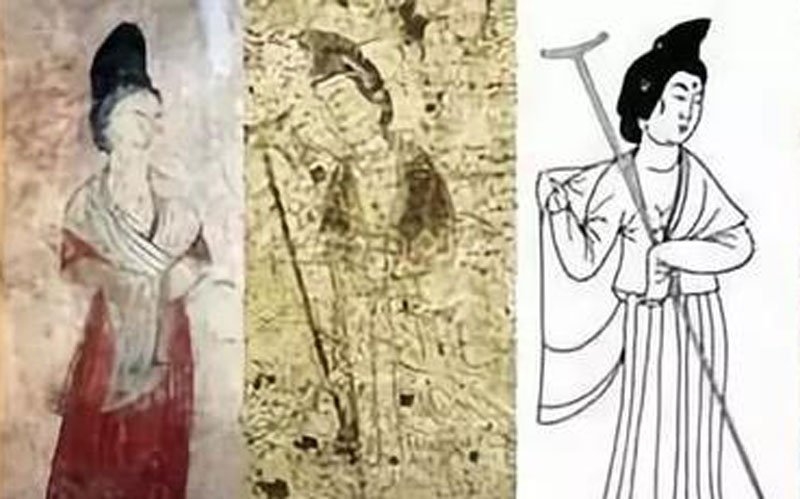 The women in the painting are loosely dressed and more open.

When Princess Yang came on the stage, folk women worshipped abundance as beauty, dressed loosely, and became more and more open. Ruqun is not only popular in women's clothing in the Tang Dynasty but also popular with many girls in modern times.

There is a kind of neutral dress in the current fashion trend. Generally, girls wear a masculine dress, short hair, men's shirt, and so on. However, as early as the Tang Dynasty, it was a fashion for women to wear men's clothes.

It is said that women wear men's clothes that originated in the imperial palace. During the period of Gaozong in the Tang Dynasty, Princess Taiping danced in men's clothes at banquets and was praised by the emperor, which attracted folk imitation.

Since then, women wearing men's clothes have become popular. The most common men's clothes worn by women in the Tang Dynasty were half-arm and military uniforms. 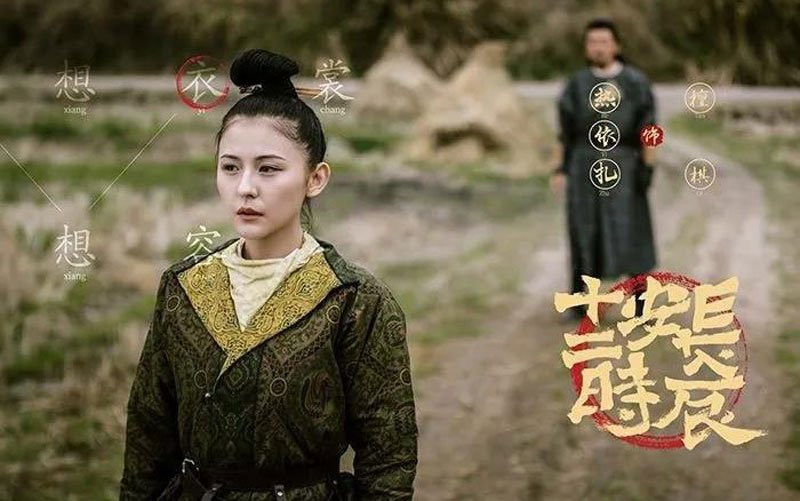 Women wear men's clothes not only reflect the aesthetic neutrality of the Tang Dynasty's clothing, but also show the cultural atmosphere of tolerance, equality, and heroism of the Tang Dynasty. Women can dress freely in men's clothes. Even heroes like Princess Pingyang and Hou Siniang wear military clothes to kill their enemies.

Tang dynasty women like two cheeks not blush, only black paste on the lips, two eyebrows painted in the shape of eight (八) in Chinese. Tang Dynasty women also have many fantastic decorations, through a variety of different facial makeup and color, decorative collocation, highlighting their own characteristics. 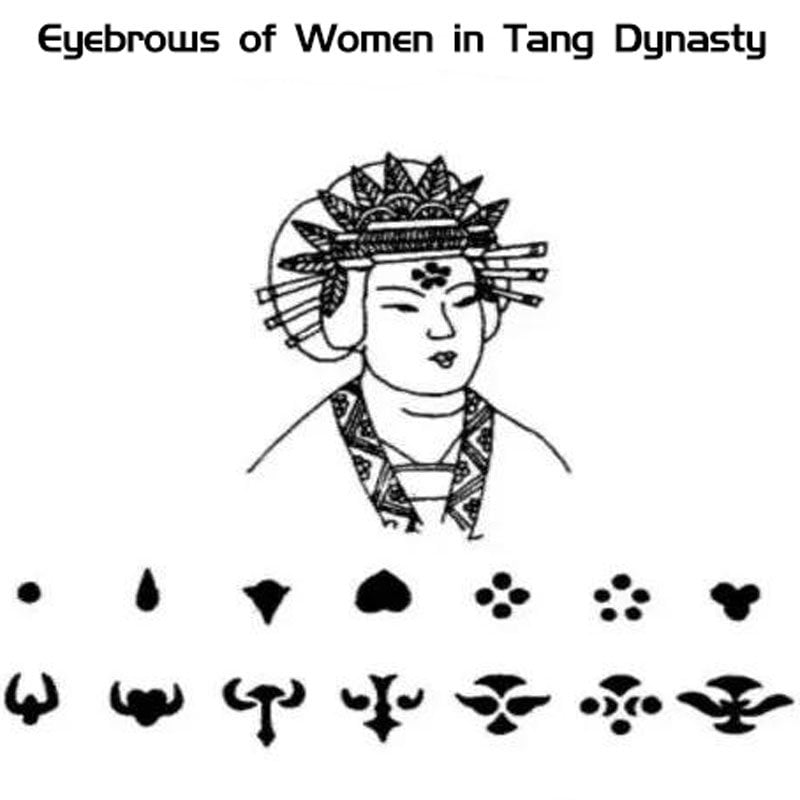 There are two main styles of eyebrows, one is the broad brow, the other is the willow eyebrow, which is slender and long.

Hufu was very popular in the Tang Dynasty. Basically, everyone wears Hu dress, hu hat, and hu boots. At that time, the Hu clothes worn by the Tang Dynasty people not only refer to the clothes of northern minorities but also many foreign clothes. 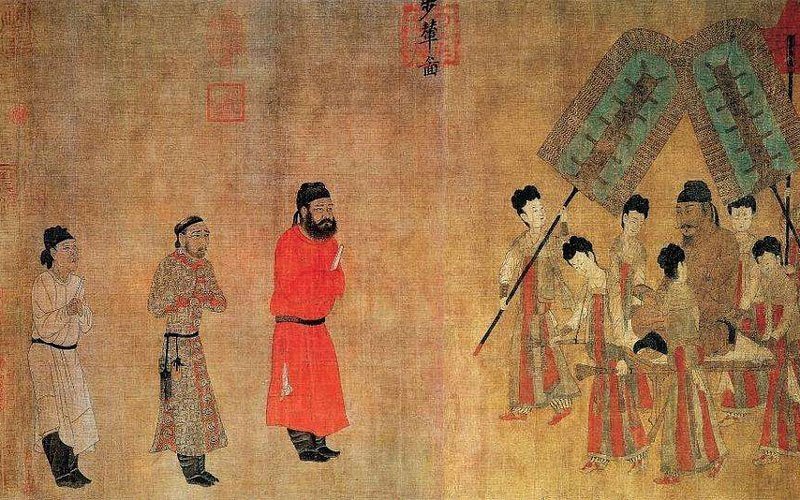 The prosperous Tang Dynasty was all-inclusive, so it can be said that all roads lead to Chang'an. Chang'an City is inhabited by many people from other countries, such as Huihe, Nanzhao, Persians, Indians, and so on. These people gathered in Chang 'an, bringing a variety of cultures, but also brought a variety of clothing.

The main features of Hufu in the Tang Dynasty are narrow cuffs, lapels, waists, and brocade shoes. At the same time, it pays more attention to details and often embroiders brocade edges on cuffs and collars for decoration.

It is quite different from the traditional Chinese wide sleeves. It fits well and is convenient for people's activities. In terms of color, Hufu is mostly red and black, and the clothes are often embroidered with flowers and animals.

Hufu is beautiful and generous. People ride horses, hunt, and play football. It is more convenient and suitable to wear Hufu. Women look slender, while men look more handsome and free in Hufu. Therefore, it is not surprising that Hufu was warmly sought after by the Tang Dynasty people. 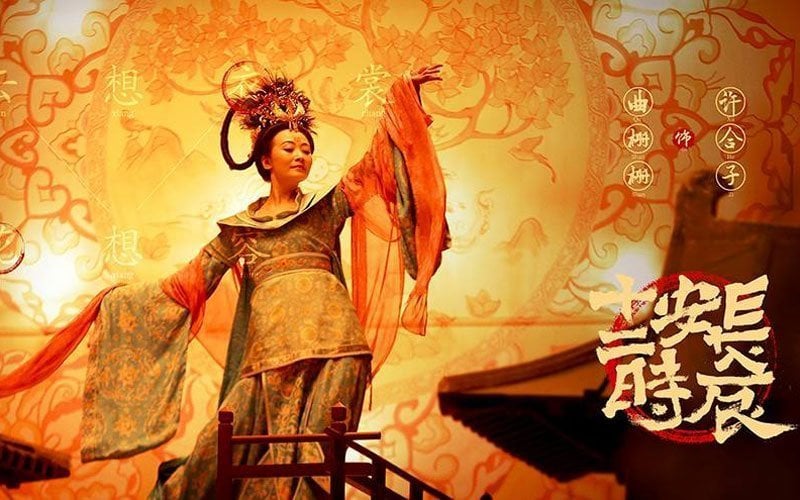 Eddie
Creative License: The article is the author original, udner (CC BY-NC-SA 4.0) Copyright License. Share & Quote this post or content, please Add Link to this Post URL in your page. Respect the original work is the best support for the creator, thank you!
Tang Dynasty
Related