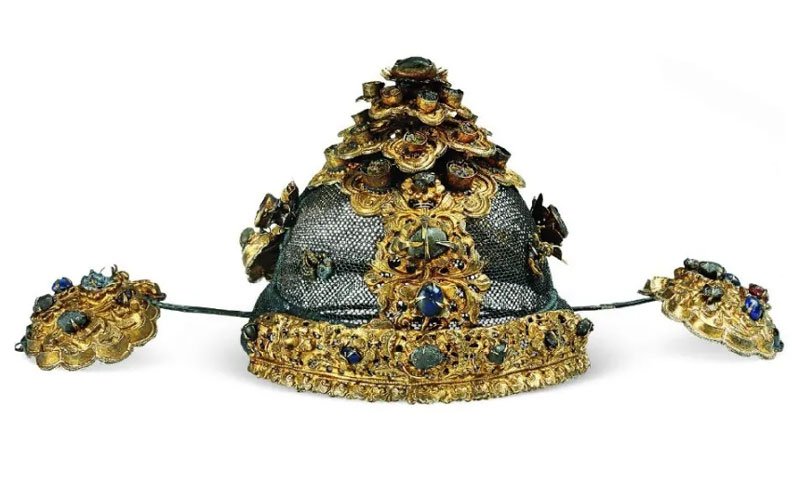 The Ming dynasty was one of the most commercialized periods in ancient Chinese history, particularly in the Jiangnan region.

From the point of view of hair jewelry, the most significant change shown in gold and silver jewelry during the Ming dynasty, compared to the Song and Yuan dynasties, was an increase in the number of types and styles, and a more detailed distinction in names.

Various types of traditional Chinese hair jewelry, have different names, depending on where they are worn, or on their decoration, style, and even their length.

Today we will focus on the Diji and Tiaopai.

Diji is a new type of wig bun that appeared in the Ming Dynasty, generally made of gold and silver wire or horsehair, and hair, covered with soap-colored yarn and worn over the top bun.

The appearance of the Diji was influenced on the one hand by the wearing of Guan by women from the Northern Song Dynasty onwards, and on the other by the popularity of the 'Baoji (包髻)' hairstyle during the Jin and Yuan Dynasties.

In the Yuan dynasty, Diji was the hair bun itself, but under the influence, the Diji was covered with fabric and gradually changed to being a wrapping around the hair bun. 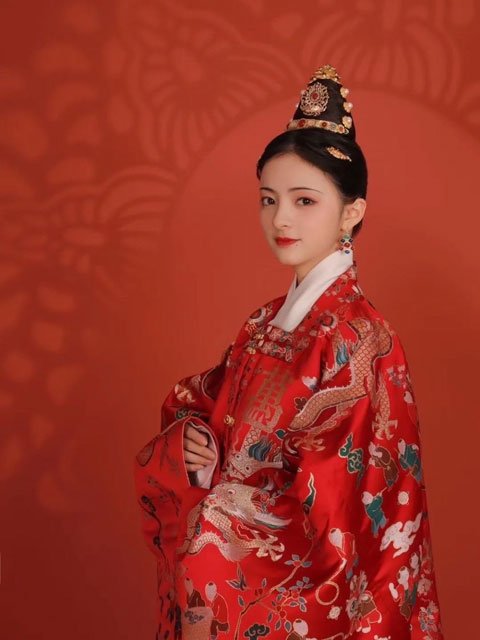 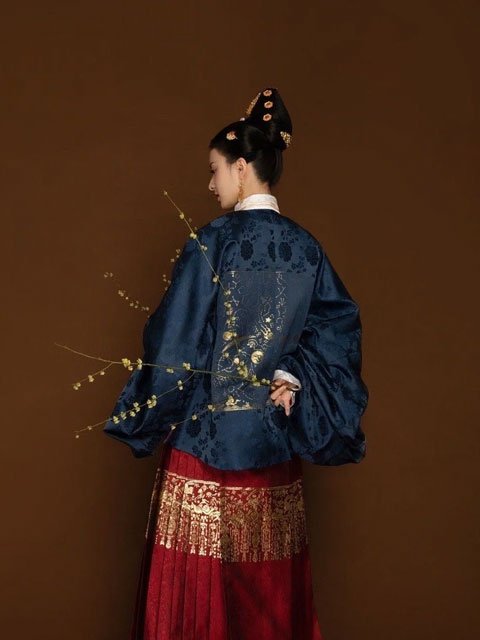 The Ming Diji was a formal dress for married women and was worn at home, out, or when meeting friends and relatives. Normally, gold Diji is only worn by women of a certain status and position.

Most of the Diji excavated from Ming dynasty tombs are made of gold and silver wire. A small gold Diji was unearthed in Jiangxi province, made of fine gold wire like hair, on which more than 40 jewels were set, and a gold hairpin was inserted in the hole on each side of the bottom, making it exquisite and magnificent. 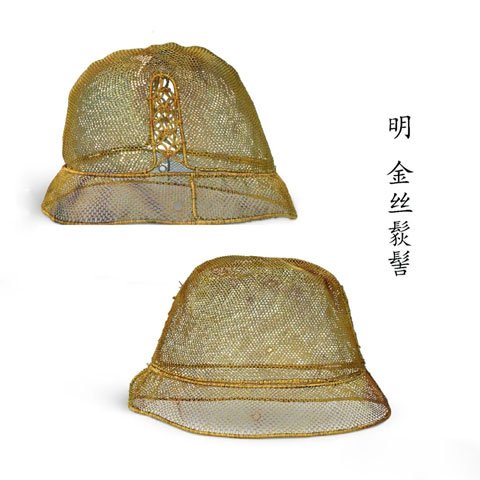 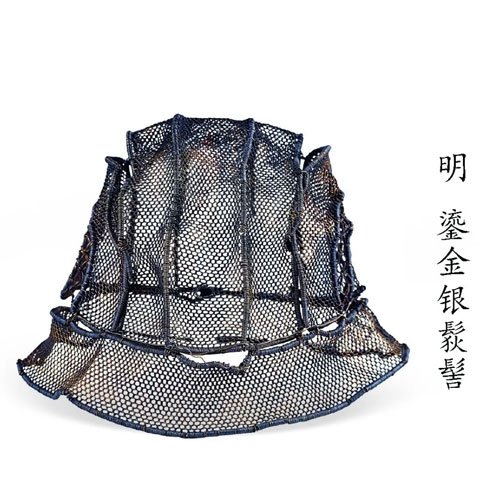 Women in the Ming dynasty generally did not wear Diji alone, but surrounded it with various hairpins, each with its own name, depending on where and how it was worn.

Broadly speaking, include the following:

worn in the middle of the Diji's front, it is a long hairpin, inserted from the bottom up. The head of the hairpin is often styled as statue of the Buddha, Sanskrit characters, pagoda, and immortals. 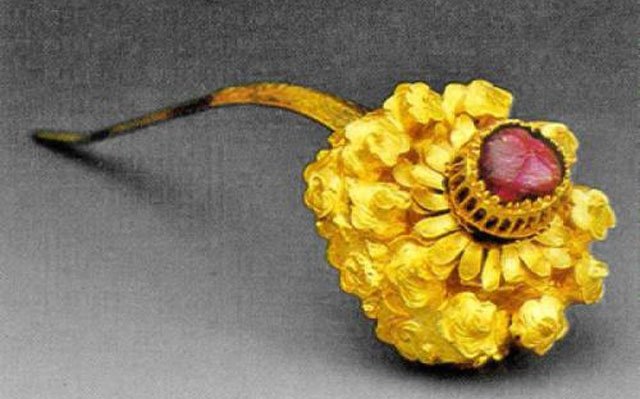 worn in front and behind the Diji, located below the Tiaoxin, the style mainly includes statues of the Buddha, Guanyin, Sanskrit characters, dragons & phoenixes, flowers, and immortals. 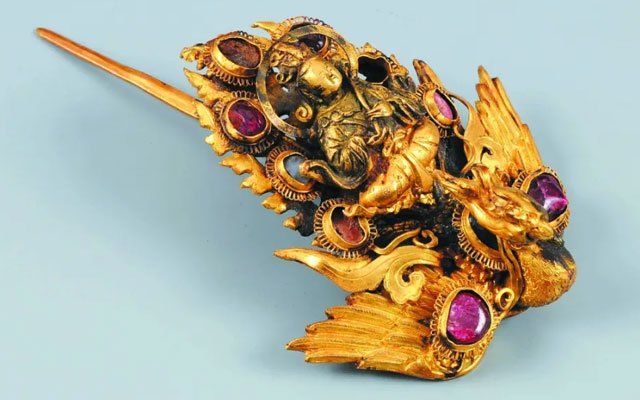 worn at the base of the front of the Diji, has an overall curved looped band with a hairpin foot that runs vertically backwards, or with ties at both ends. The shapes were mostly flowers, clouds, dragons & phoenixes, immortals, etc. Some were also inlaid with pearls and jade.

hair jewelry with auspicious clouds on both sides of Diji.

The shape resembles that of a group of peaks standing side by side, with one peak being the highest and the two sides symmetrical, and is usually worn at the bottom of the back of the Diji. 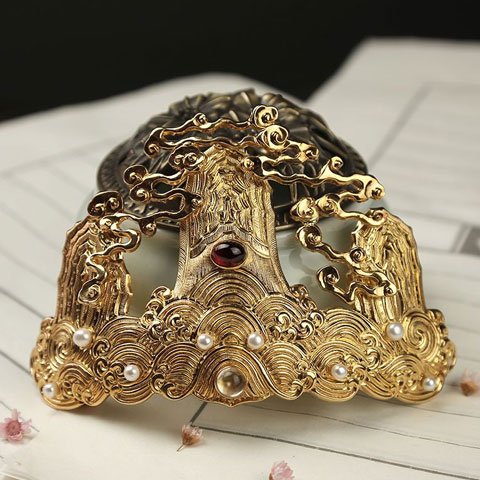 A pair of hairpins with longer feet and a slight backward bend is generally inserted on the left and right sides of the bottom of the Diji to act as anchors.

Of course, in addition to the hair jewelry mentioned above, there are also short hairpins with the same decorative theme to pairing with Diji. 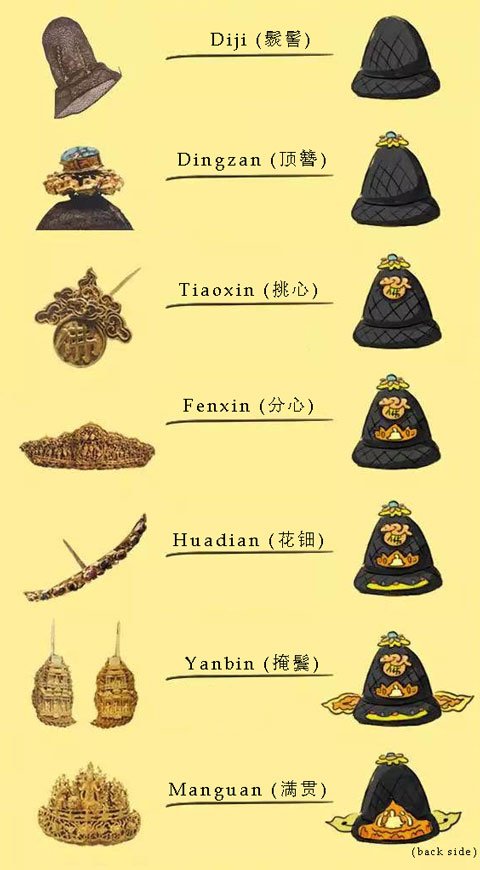 In the course of time, by the mid to late Ming period, the Diji had undergone radical changes and gradually became a whole, with the emergence of the luxury version of the Diji - Jinbao Ji (金宝髻). The other was gradually simplified to a Guan, which was similar in shape to the Zhongjing Guan (忠静冠) worn by officials. 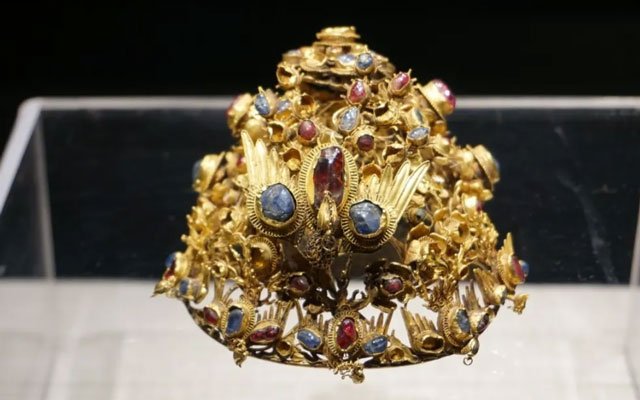 Next up is another traditional Chinese hair jewelry - Tiaopai

In many Ming portraits of noblewomen, there are two long tassel-shaped objects next to the Diguan (翟冠). What exactly is it called? And what are the occasions for using this jewelry?

Tiaopai was one of the hair jewelry worn by noblewomen during the Ming dynasty. It is a symbol of status and identity.

It consisted of two parts: a gold hairpin (usually in the form of a phoenix, dragon, lotus flower, etc.) and a long tassel, often woven with pearls in the shape of a square or hollowed-out tassel, which in some cases was studded with precious stones. At the time, ordinary people were not allowed to wear them. 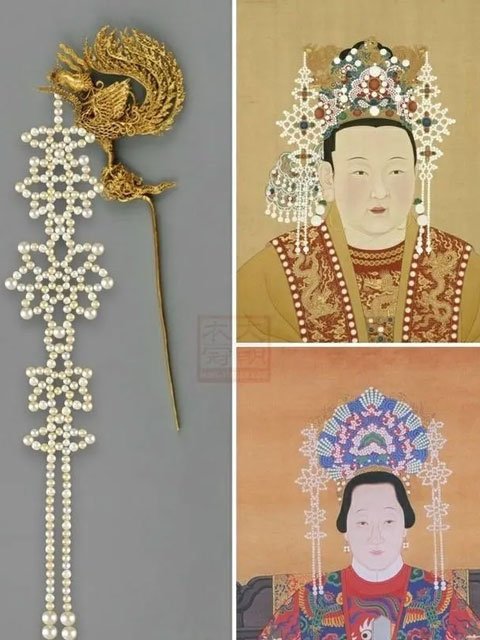 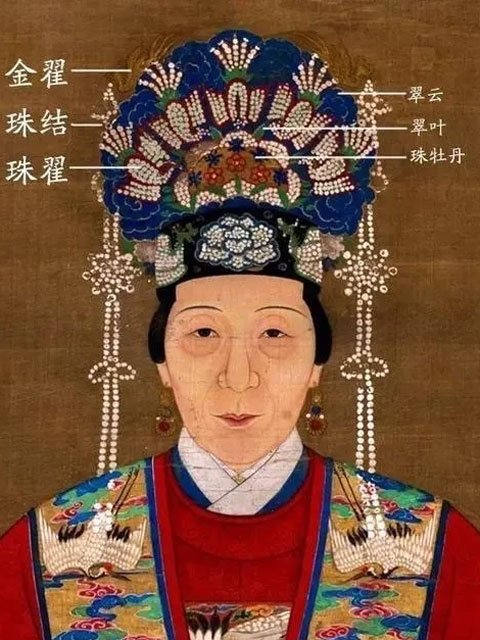 Video on how to make a Tiaopai:

This is all about traditional Chinese hair jewelry: Diji and Tiaopai.