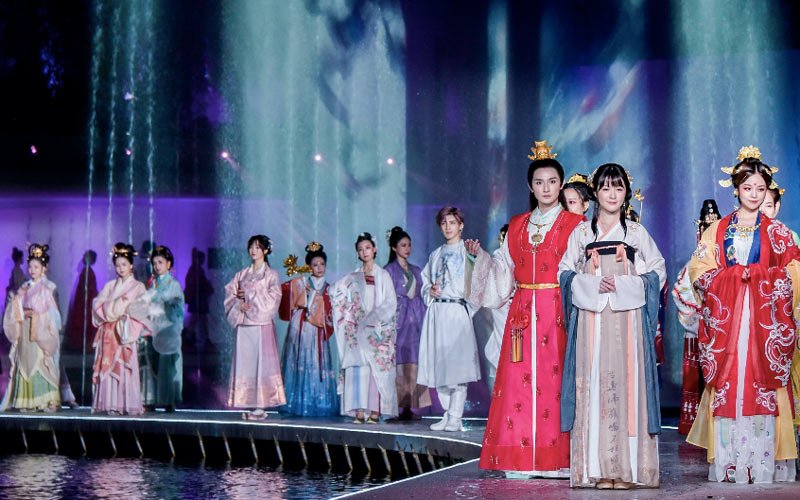 After the show began to check tickets, Ruo Shui was crowded by the crowd of spectators to the stands. She stared at the model who was walking towards her, who was wearing, the biggest attraction of the fashion show - "National Treasure" and the designer of Huachang Jiuzhou collaborated on one of the National Treasure's derivative Hanfu collections, and when this style Hanfu already sold out in just 10 minutes when it went on sale.

This is the evening of June 29th in Hangzhou, China Silk Museum held in the national style of a Chinese Hanfu fashion show, in the words of Ruo Shui, but also the trendsetter of Hanfu lovers. 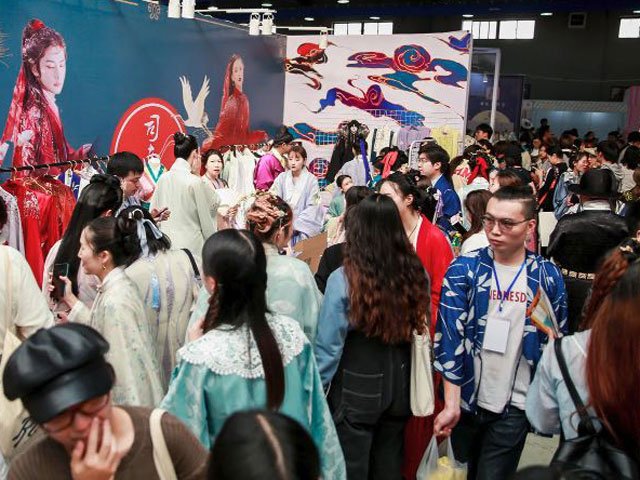 Ruoshui, the 25-year-old Chengdu girl has a wardrobe full of more than a dozen Hanfu. "I often wear Hanfu to and from work every day." Ruoshui buys mostly Song and Ming Hanfus in styles more suitable for everyday wear.

The Song dynasty Hanfu is light, thin, and simple, and the Ming system is dignified and majestic. "The style of dress in the Song dynasty was different from the rich and complex aesthetic of the Tang dynasty, and dressing began to tend towards a thin, narrow style, with small cuffs. No longer just going for fairy dust, but simple and practical, convenient for office workers." She said. 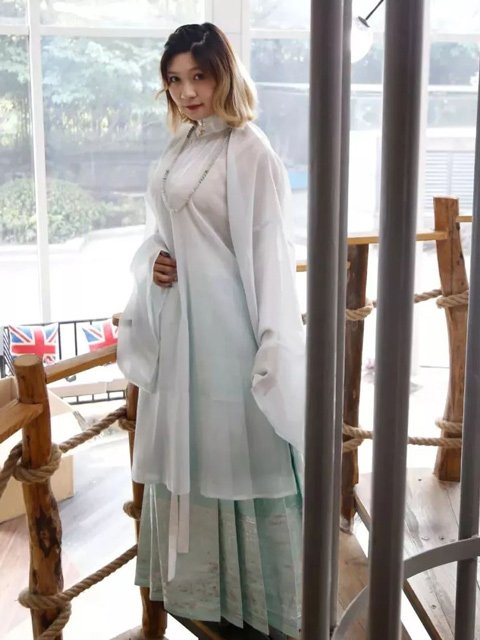 Wearing Hanfu fashion, Ruoshui is not the first person to come up with this concept. But she has also worked out a set of tips on how to wear Hanfu for daily.

"If it's a small event, such as a banquet, I'll wear a full set of Ming clothes: a long shirt with a stand-up collar and a horse-faced skirt, accessories according to my own habits, I like jade and stones, and a simple beaded string can go out.

When the weather is hot, I wear a tang-style Tan-collar Ruqun or Song Moxiong & Beizi, both of which are preferred for light and narrow sleeves. However, in autumn and winter, the Ming-style Hanfu is definitely preferred. Ming-style are so wide that you can't see them even if you tuck a sweater inside, so it's highly recommended." 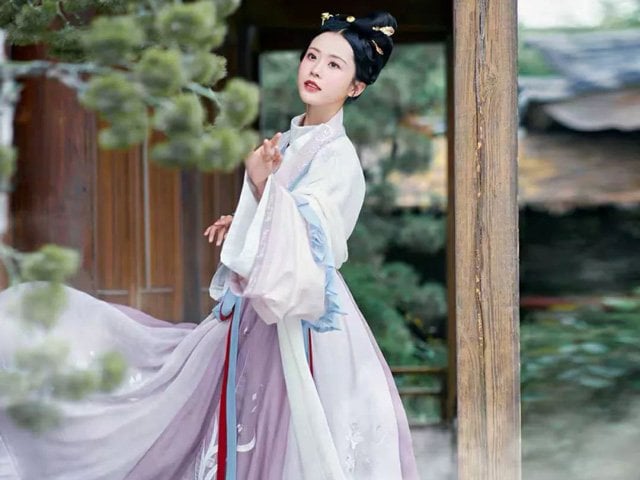 "As long as the form itself is fine, how to mix and match, of course, according to my own comfort. Sometimes I wear a Ruqun and sneakers to go running, sometimes I wear Song pants and slippers to walk the dog, and even wear the Ming style with a cute hat."

There have also been experiences where people have been accused of not fitting into the Chinese culture by wearing different styles randomly, Ruoshui only said, "It's the clothes that accommodate the people, not the people accommodate clothing. Civilized clothing is meant to make people more comfortable, not to make them indulge in self-moving."

In 2014, Ruoshui, who was still in college, started wearing Hanfu out of interest. At that time, Hanfu was far less well known than they are now, and there were even fewer online stores. Apart from purchasing them at brick-and-mortar stores, the only way to get them was to have them tailored to a tailor's shop. "Choose your own fabric, and describe the style you want with the tailors, some skilled tailors can draw you a rough model out on the spot. The effect of the finished garment can only be imagined by yourself." 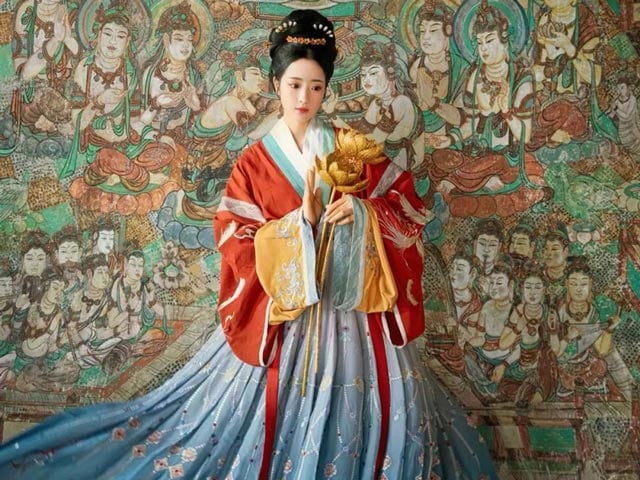 From 2015 to 2016, with the rise of traditional culture, Hanfu gradually became a topic of conversation and slowly entered the public eye. It ignited the revelry of Hanfu lovers. In addition to the well-made restored Hanfu, some improved Hanfu that are closer to the habits of modern people are also becoming popular, and for the Ruoshui, "There are more choices, and newcomers to Hanfu can better understand Hanfu."

In recent years festivals such as "Chinese Costume Day" set up to promote traditional Chinese costumes have gradually broken the circle and expanded the audience of Chinese Hanfu fever to include different age groups.

In order to make traditional Chinese Hanfu more widely known and accepted, there are organizations behind the push, in addition to enthusiasts like Ruoshui. Zhang Yu, the CEO of Huachang Jiuzhou, also counts as one. The main business of Zhang Yu's company is cosplay, entertainers, and games. He often deals with ancient costumes and his love for Hanfu is natural.

He found that the market demand for Hanfu is still very large and competitive, and the competition is fierce. According to statistics, by the end of 2018, China's Hanfu market has more than 2 million consumers. the number of people who bought Hanfu in 2018 Up 92% year-on-year. However, many of these new handmade artisans and designers are in the process of being promoted due to lack of publicity, traffic exposure, small shops, and lack of a complete supply chain is struggling to survive in the cracks. 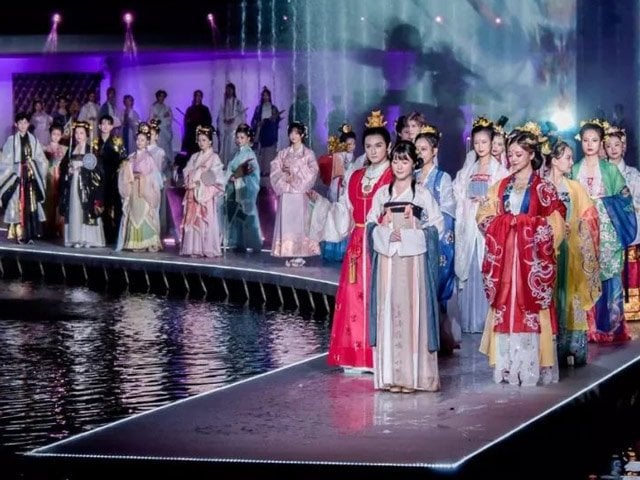 "Maybe we can build a platform and use the resources the company has accumulated in the early stages to do the publicity and supply chain for these artisan businesses Help, help them out of their dilemma." Thus, Huachang Jiuzhou was born.

"Any business that leaves the culture will just float on the surface. A single business is a selling mindset, while we are a cultural mindset." Huachang Jiuzhou, which gathers all the external circles together, creates a platform position to help Hanfu artisans better realize their dreams. "Hanfu craftsmanship is exquisite and the lead time is long, and customers often have to wait 30-60 days after the pre-sale for many clothes before they can get them. This is an ordeal for people who are used to shopping quickly online. "We started focusing on developing basic customer service skills to reduce unnecessary returns by communicating detailed instructions to customers upfront. Merchants will then be encouraged to stock more stock and improve their supply system. In terms of merchant selection, we will also start to give more consideration to merchants with a new marketing mindset."

"The earliest Chinese Hanfu we can collectively call it restoration, that is copy the clothing pattern and color scheme from the ancient painting books. It is a complete antique and replica. But much of the ancient clothing was incompatible with modern daily life. For example, the floor-length skirt and fat cuffs. Tradition also needs to be revamped, and if we want to promote the Hanfu to a wider audience, then it is inevitable that some of the needs of modern society will have to be met. and habits evolve." Mudan (a Hanfu designer)says, "How to incorporate Chinese elements and clothing into the aspects of our lives to make the design more practical and wearable, this is designers need a balance. 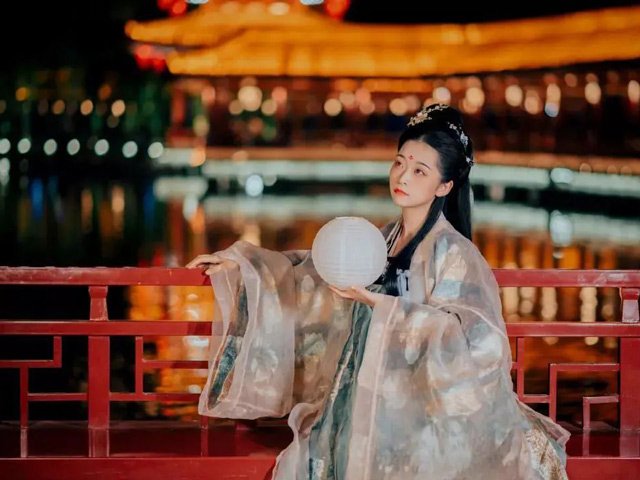 As the chief designer of Huachang Jiuzhou, Mudan was given the task of designing the Chinese Hanfu derived from "National Treasure". Although he studied fashion design, it was the first time that he designed a crossover combination of national treasures and Chinese Hanfu. "Don't think it's a heavy thing to wear national treasures on your body, besides those majestic styles, I also combine the elements of national treasures, Chinese elements, and fashion elements to make the mix style of leather jackets, eight-minute skirts, and wide-legged trousers. The collision may be more effective in promoting the spread and inheritance of Hanfu culture." 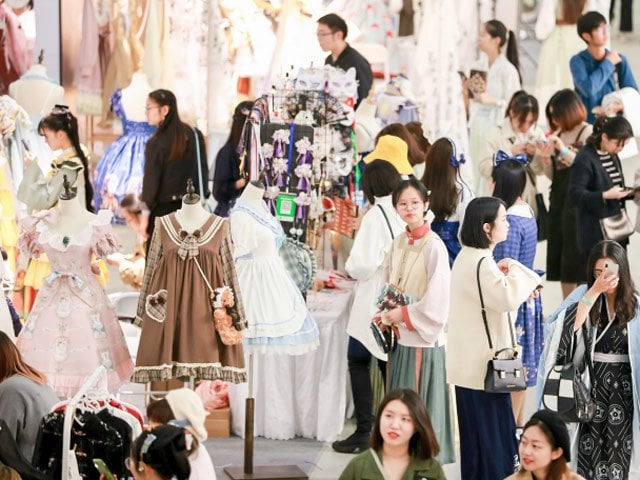 Compared to modern fashion design, Hanfu designer is a new profession that has emerged in recent years after Hanfu became popular. But for Mudan, it means more responsibility. "The history of Chinese Hanfu clothing is too long, and long history is prone to the problem of discontinuity and loss of craftsmanship, which requires artisans to quietly, he passed it on from one generation to the next." Never having been exposed to traditional crafts before, the shape of the inspection, he began to slowly find information and learn. He said, "Everyone who comes in contact with the Chinese Hanfu industry is learning and passing it on."