"Which dynasty is this ancient Chinese clothing? ", "Is this going through time and space?", the post-90s Huangyang was asked by passers-by in the street when he first went out in a Hanfu in 2012. "But now I'm walking on the road in Hanfu. I have more eyes to appreciate it, and my friends around me have begun to understand us more." She said.

Indeed, with the development of network and short video, the exposure rate of Hanfu gradually increases. Hanfu lovers group also gradually expanded from the post-80s and post-90s to the post-95s and post-00s. People can often be seen wearing Hanfu on campus, business street, and tourist attractions.

But how did this ancient Chinese clothing get popular?

From Hanfu to traditional culture 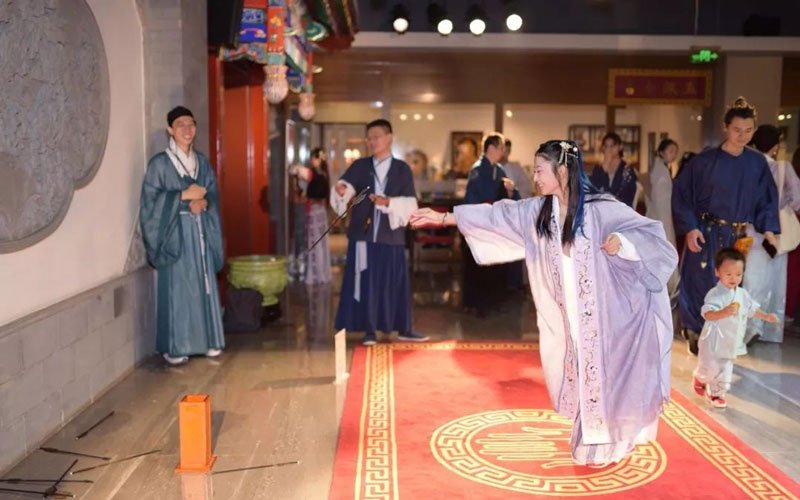 Huangfu yuehua in Hanfu and play Touhu (A throwing game, but also an ancient etiquette.)

Huangfu yuehua is a post-90s generation who has been in touch with Hanfu since 2009. At present, Huangfu yuehua is the vice president of the largest and longest-lasting Hanfu group in Beijing, Beijing Hanfu Association. "Hanfu's popularity may be due to the growing up of those children who like Hanfu, but it's more likely that people pay more and more attention to traditional culture." She said.

"After putting on the Hanfu, I pay more attention to my sitting and walking, and in the process of understanding Hanfu knowledge, I will take the initiative to understand the origin and customs of traditional festivals, and learn guqin, archery, horse riding, incense making, etc. After a deep understanding of Hanfu and the culture behind it, you will find that these are all connected together. "

The gorgeous appearance attracts more and more people to come to Hanfu, which opens a door to ancient Chinese clothing and traditional culture. 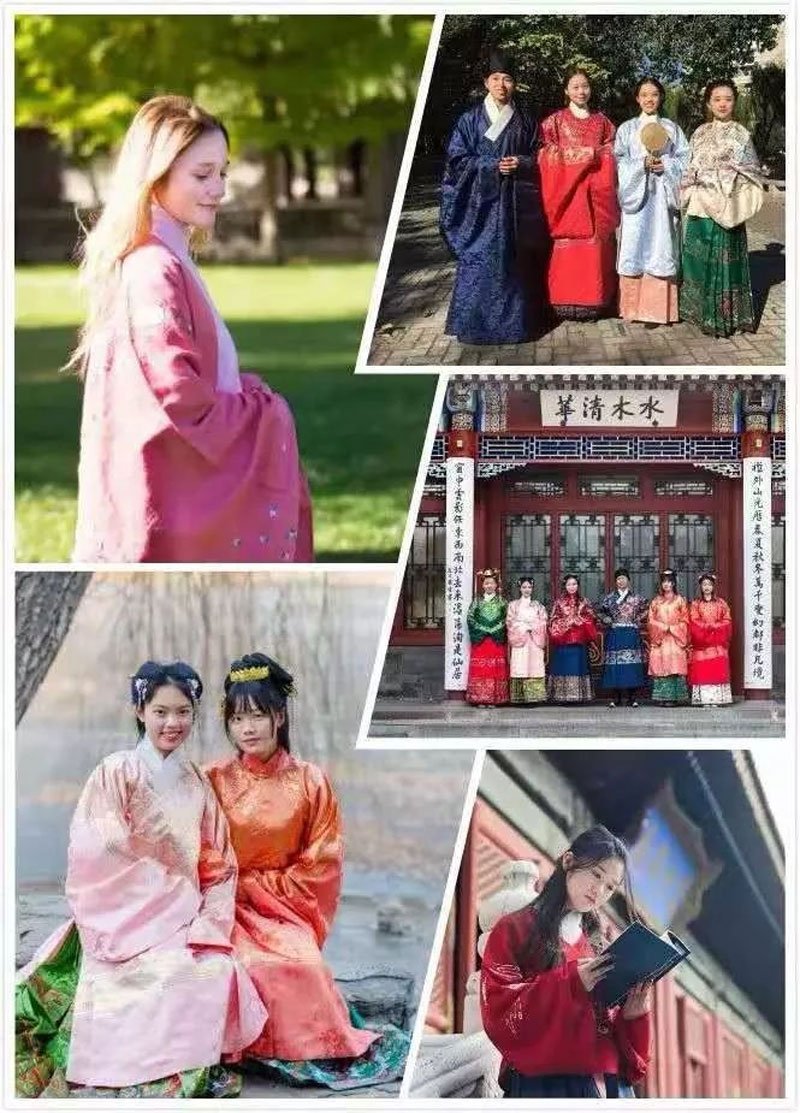 In addition to the young people in China, many foreigners also began to fall in love with ancient Chinese clothing.

In October 2017, Songfeng Hanfu club and Schwarzman Scholars (苏世民书院) of Tsinghua University jointly organized the "Hanfu night" theme activity. A number of overseas students took part in the activity spontaneously as models and tried on Hanfu. During the event, Du Shengnan had in-depth exchanges with two Chinese Americans. She said: "what I deeply regret is that they, even their parents, grew up in the United States and have very limited knowledge of Chinese culture. But when you talk with them about Hanfu and traditional Chinese culture, they also have a sense of pride." Ancient Chinese clothing, so that people born on different continents thousands of miles away find a cultural resonance.

My Hanfu is up to me 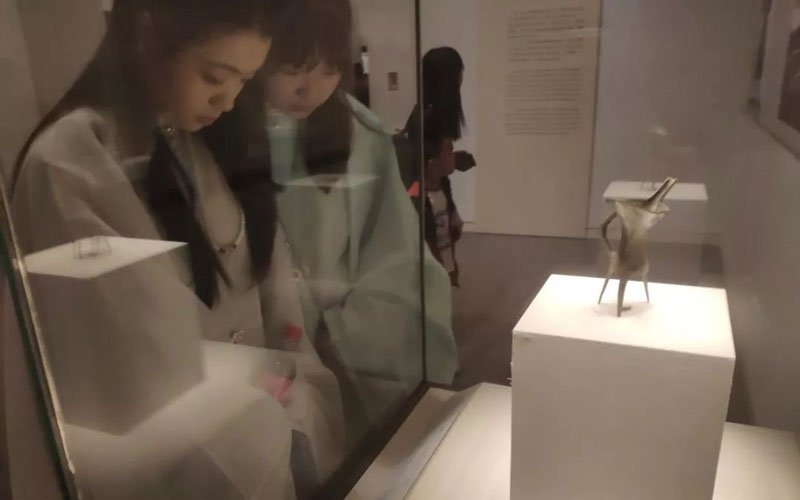 Zheng Nanru (left), dressed in a Hanfu, at the National Museum.

Zheng Nanru, a senior at Beijing Foreign Studies University, is just 21 years old, but she has been wearing Hanfu and understanding ancient Chinese clothing culture for six or seven years, and Hanfu has been fully integrated into her life. "For me, Hanfu is just like water and air. It exists naturally. Like any clothes in the wardrobe, Hanfu is just for wearing." Zheng explained, "so in addition to the shape and version, I will also pay attention to its practicability. Sometimes I buy online, sometimes I buy cloth and make it myself."

In class and shopping, she will wear a Hanfu that is convenient for action. In New Year's day, she will wear a more gorgeous dress to greet her elders. In her opinion, it is not to wear a Hanfu for the sake of wearing a Hanfu, but to choose Chinese clothing that is more suitable for a specific scene. 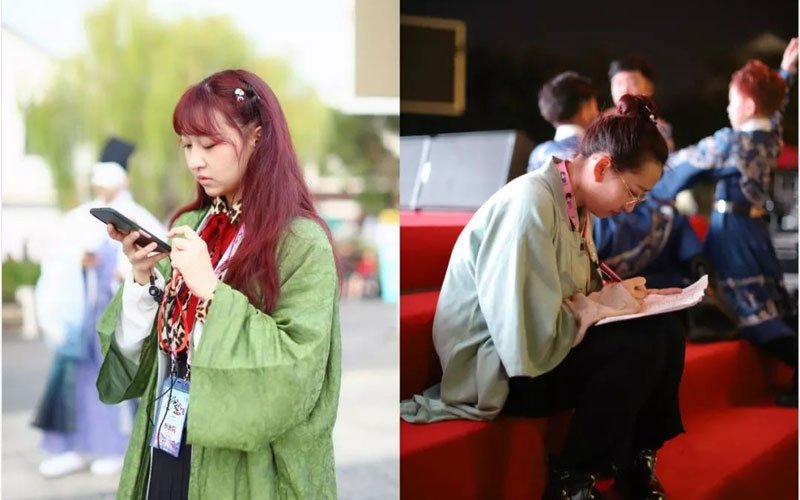 Xu gangyu, who mixes Hanfu with other fashion elements.

Xu Gangyu, a post-95 Beijing girl, shows more individuality and freedom in her understanding of Hanfu. She used to like to make handmade clothes. After her first contact with Hanfu in 2012, she began to learn how to use sewing machines to sew her first Hanfu. With the increasing number of different kinds of Hanfu in the wardrobe, she will mix Hanfu with other modern clothes. It can be imagined that the expression of Hanfu in the future will become more diversified.