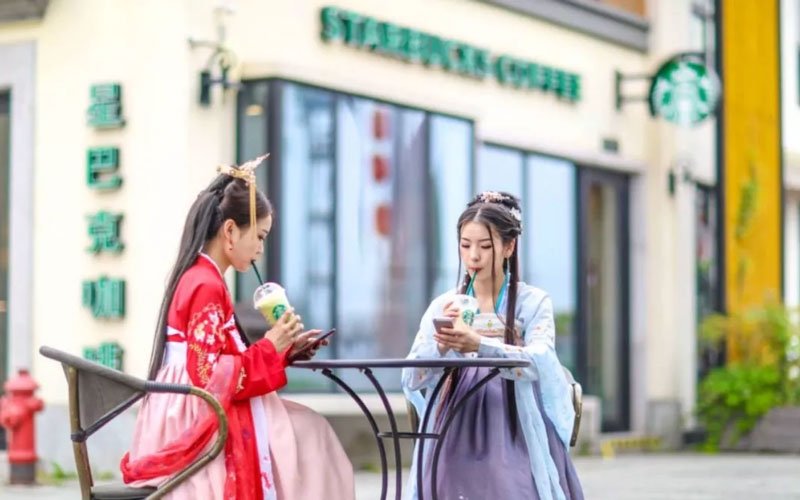 What is Hanfu? At present, the full name is widely recognized as the “traditional costume of the Han nationality”, that is, the clothes worn by the Han nationality from the Yellow Emperor’s accession to the throne to the late Ming and early Qing Dynasty.

On September 30, 2019, a group of young people in Chinese costumes Hanfu came to the streets of Sydney Opera House with zither and pipa. They sang "my country and me" with music in foreign countries. According to @Ms. Tingyue, the initiator of the event, this is a Hanfu flash event in three landmarks in Sydney, aiming to promote traditional Chinese culture. 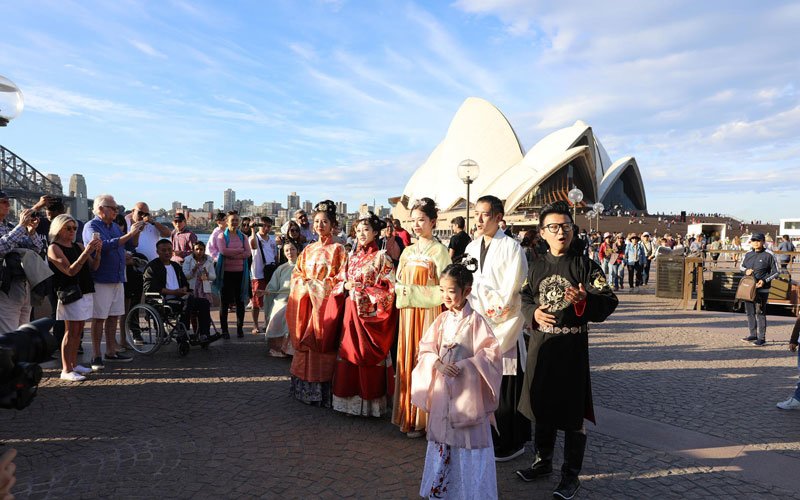 What is Hanfu? At present, the full name is widely recognized as the "traditional costume of the Han nationality", that is, the clothes worn by the Han nationality from the Yellow Emperor's accession to the throne to the late Ming and early Qing Dynasty. On the Internet, the most popular styles are Qiyao-Ruqun (齐腰襦裙) in the Wei and Jin Dynasties, Qixiong-Ruqun (齐胸襦裙) and large sleeved shirt (大袖衫) in the Tang Dynasty, as well as Beizi (褙子) in the Song Dynasty and Horse-face Dress (马面裙) in the Ming Dynasty.

The earliest appearance of Hanfu was in November 2003, when Wang Letian, a power worker, went to the streets wearing his own made Hanfu, which was regarded as the starting point of the "Hanfu revival movement". Fang Wenshan, a Hanfu enthusiast, launched the Xitang Hanfu culture week in 2013 to encourage young people to wear Hanfu and go to the streets of the ancient town. As for why he loves Hanfu, Fang Wenshan said in a later interview, "it's a pity that I don't promote Hanfu because of its identity and ownership. Cultural identity can be transformed into a kind of life adjustment, and then added to the value of the business. " He also believes that Hanfu needs modernization. 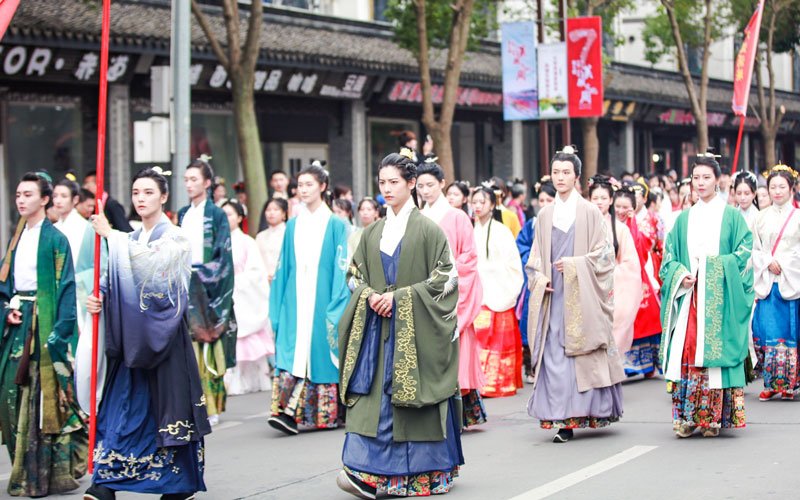 In 2017, actor Xu Jiao went to the red carpet of the Venice Film Festival wearing the Hanfu produced by Zhiyuji, a self-made Hanfu brand. Like a true love fan, Hanfu dressing has also become the daily update content of Xujiao's social platform. With the help of social media, Hanfu, a small category, ushered in an outbreak in 2018. More and more girls came to the scenic spot or even shopping center wearing Hanfu. He Wei, a former New Yorker reporter, came to Chengdu and exclaimed, "how is Hanfu popular? I came to China this time and found many people wearing this kind of clothes. 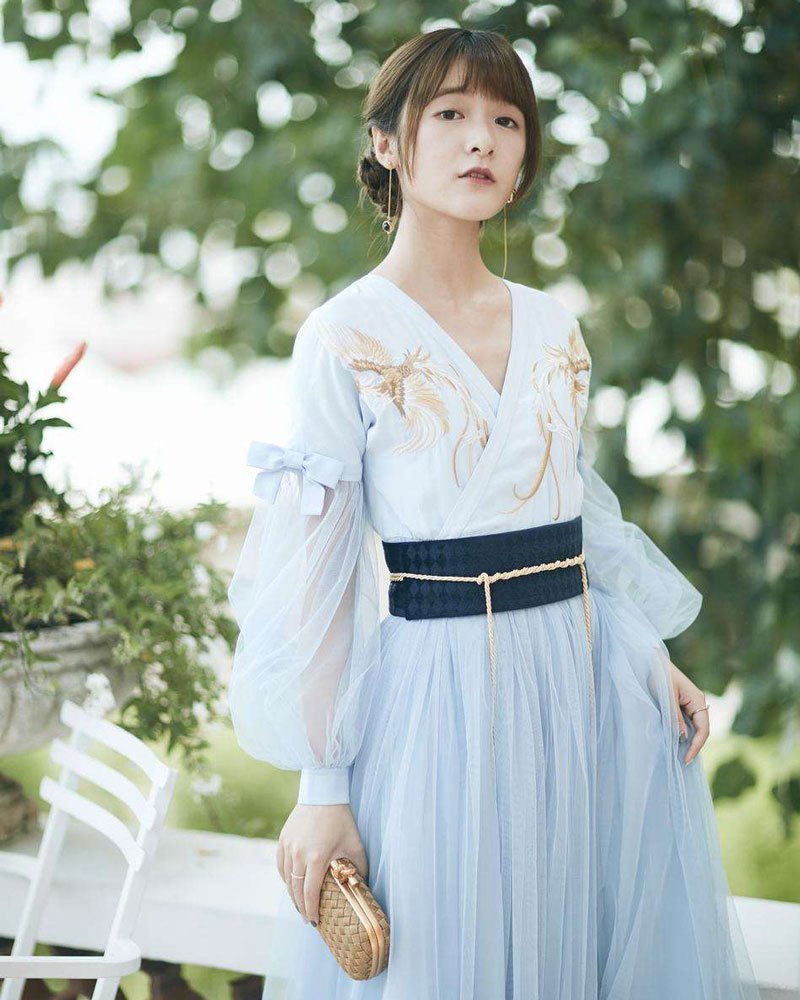 Long before Hanfu became a phenomenon, "ancient clothing" and "Chinese style" were more familiar words to the public. As the millennials gradually became mainstream consumers, they had a more accurate definition of clothing. The well-documented "Hanfu" gradually replaced the vague description of clothing by Chinese style and became an independent consumer category.

In September 2019, Poetic Oriental Beauty, a Chinese style photography brand, announced to the public that it would launch the Hanfu brand "Congyi clothing". According to their prediction, Hanfu has become a billion level market.

Not only young girls, wearing traditional clothes is being accepted by a mass consumer group. Pan women's workshop told TMTPost that their customer groups are polarized, with a large number of young user groups aged 18-30. They pursue the influence of traditional Chinese culture and popular film and television IP, hoping to experience a series of characters. At the same time, the user group between 40-60 years old is also growing rapidly, and the feelings of this generation for traditional culture are becoming increasingly strong. 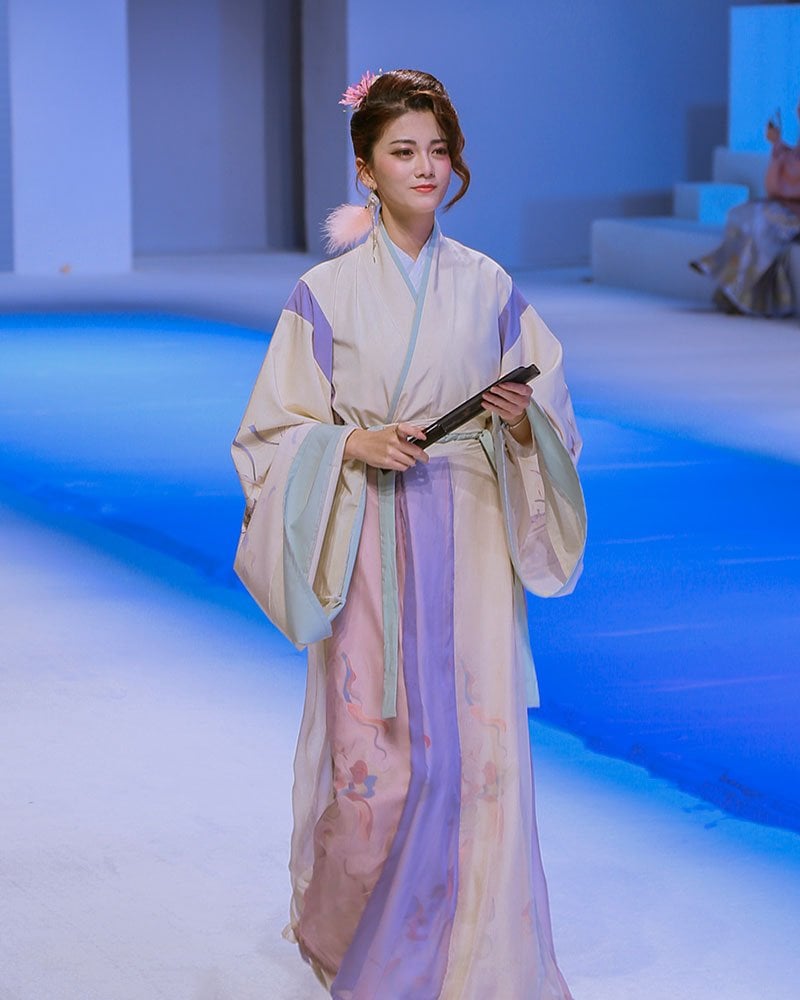 The improvement of Hanfu is inevitable

If you ask young people who like Hanfu what they want to own the most and how to buy a Hanfu, they will probably answer you with the same name "Minghuatang".

Minghuatang, a well-known clothing brand in the Hanfu industry, has been a mysterious existence for the past 12 years. Each year, it will launch a limited number of new products, with the price of single products ranging from thousands to tens of thousands, and only accept reservations. 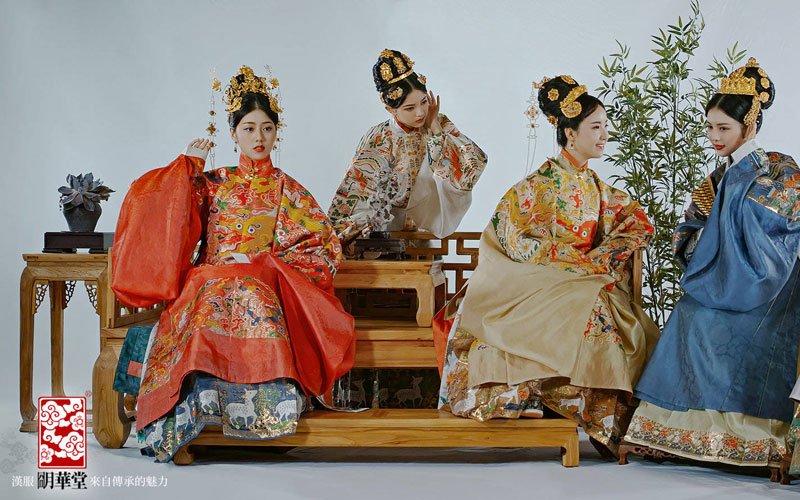 New products of Minghuatang in 2019

In the documentary "great craftsman", Zhong Yi, founder of Minghuatang, for the first time narrated the entrepreneurial history of the brand from 0 to 1. He believed that Hanfu is the same as Hanbok, Kimono and European suit, and it is a kind of national dress. The main purpose is cultural etiquette. After the Qing Dynasty, the development history of Hanfu was interrupted for 500 years. For today's Hanfu brands, the production of "Hanfu belonging to the 21st century" has become a new proposition.

"National clothing is different from our fashion clothing. Designers must not change it because of some sudden thoughts and feeling good." Zhong Yi said. At the same time, the acceptance of Hanfu in the male group also reflects the problems it will encounter as a clothing category in the mass market. Regarding the 21st century Hanfu, how to choose between design, which Hanfu elements need to be retained, which can be changed, and there is no unified standard.

In terms of the improvement of Hanfu, the brand "Heaven Gaia" of Paris Fashion Week represents another trend. 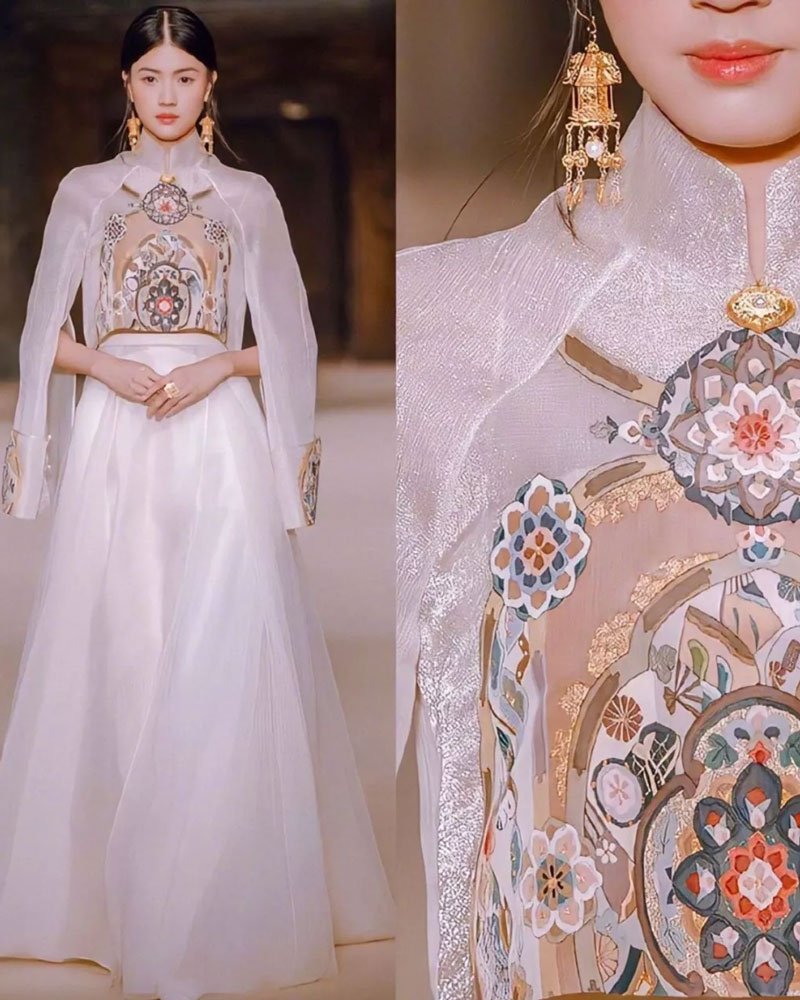 In the international view of fashion, the high-level customized clothing with Chinese elements is gaining attention. The Chinese aesthetic is no longer a simple collage of Chinese symbol elements, but a reflection of Oriental culture and aesthetics through fabric, embroidery and pattern design.

Lily Liu, a fashion designer, told TMTPost that compared with suits and wedding dresses, the most irreplaceable advantage of dresses with Hanfu elements is "deeper emotional expression". 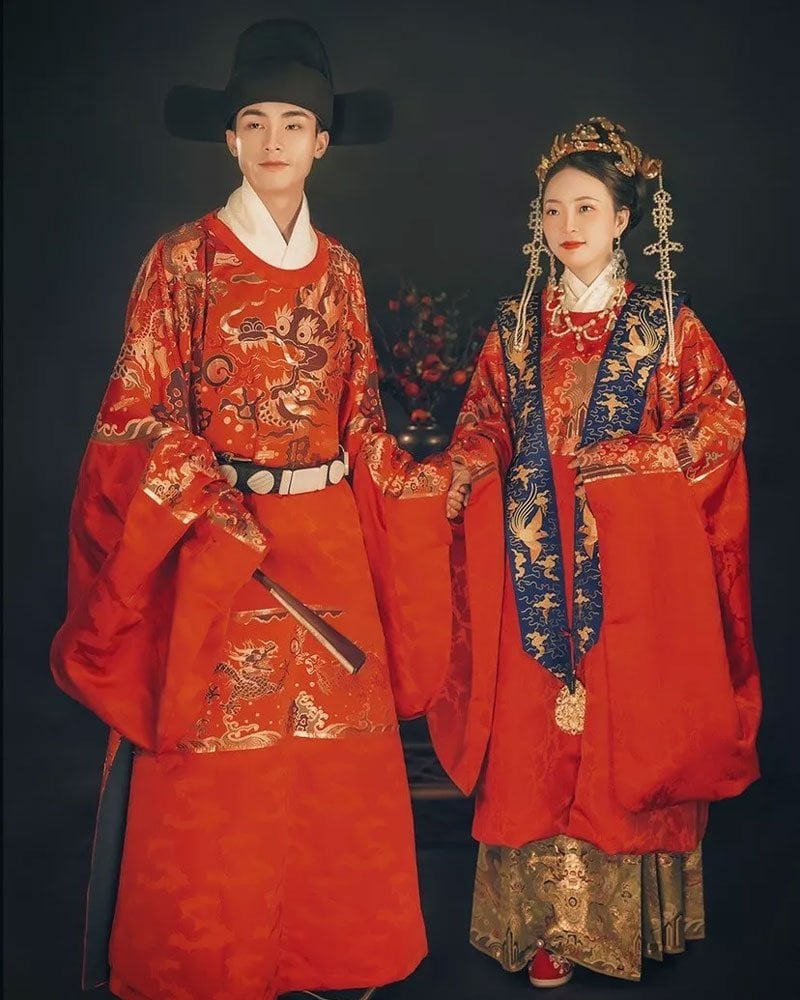 "The wedding dress reflects the national character, views on different roles in the ceremony and expectations for the future. It is the intersection of everyone's inner feelings and aesthetics under the balance of family and society.

More in-depth understanding, Lily Liu believes that clothing is the carrier of culture and the concrete expression of the spiritual core. Behind the popularity of Hanfu is the growing sense of national identity and self-confidence of a generation of young people.

When you put on your Hanfu, what are you wearing?

Although the price of Hanfu is more expensive than ordinary clothes, young people can't stop loving Hanfu. They will comment on each set of Hanfu evaluated on the Internet, and choose the most favorite one carefully from the perspective of fabric, printing and color matching. At the same time, there are also affordable and improved versions of Hanfu.

For a long time, the purchase channel of Hanfu has been dominated by online stores. Because of the high cost of fabrics and the complex technology, most brands confirm the sales volume by way of pre-sale deposits and then put it into production. The construction period is from two or three months to two or three years, which determines that in the early stage of development, Hanfu is difficult to achieve real mass production. 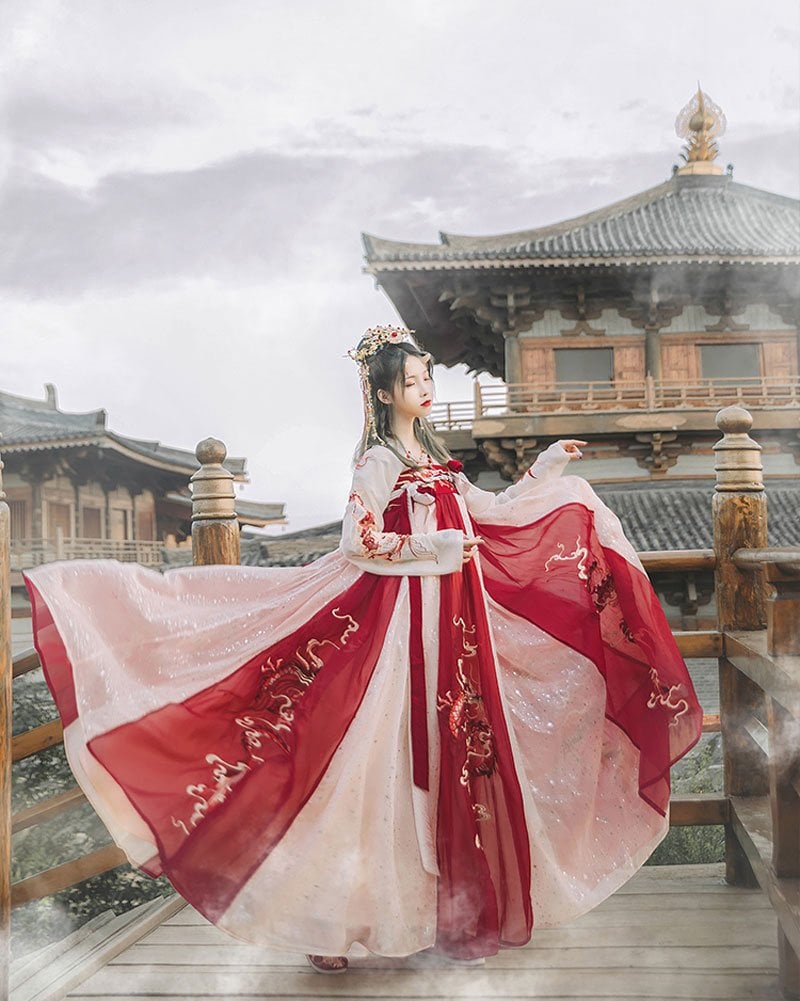 a very popular style of Hanfu

Besides "beauty", what deeper meaning does Hanfu represent? Mo Ting, a fan of Hanfu, believes that it is the lack of modern people's sense of ritual and the recognition of national culture. At a certain time, wearing a certain kind of clothes and eating a certain kind of food, these traditions called "festivals", have been diluted under the fast pace of modern life, and the Hanfu, which was born in the long history, has become the only choice when people are looking for a sense of ceremony.

In the most popular episode of the video, Shiyin, the blogger @ Shiyin, came to the EU headquarters in her Hanfu of Minghuatang to represent Chinese Hanfu fans in diplomatic activities. @Shiyin's words in an interview with reporters are enough to resonate: "Hanfu will not be worn every day, but we are trying to revive this culture."

The article comes from TMTPost, written by He Jing.