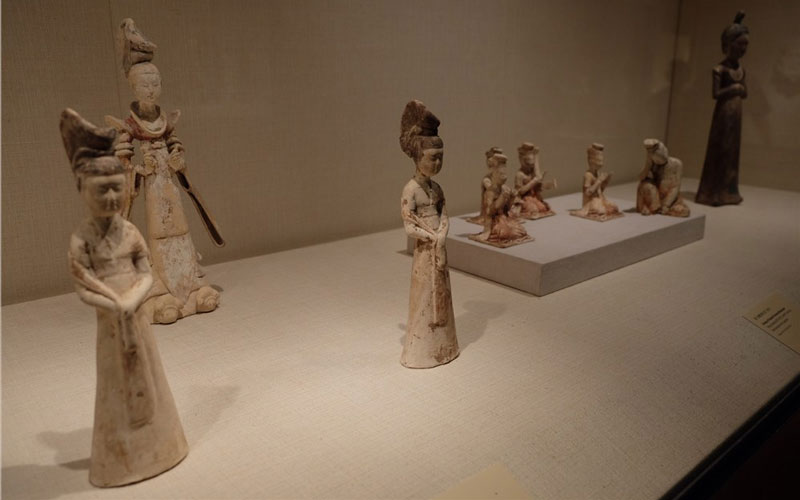 Duo Ma Ji is perhaps one of the most familiar hairstyles of the Tang Dynasty. 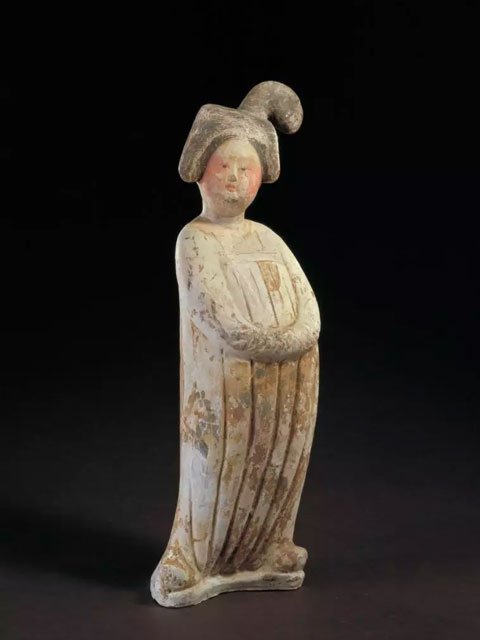 In fact, this name already appeared in the Han Dynasty, but the exact form of Duo Ma Ji in the Han Dynasty is still uncertain. The name was used during the Tang Dynasty to describe a bun that was tilted to one side. 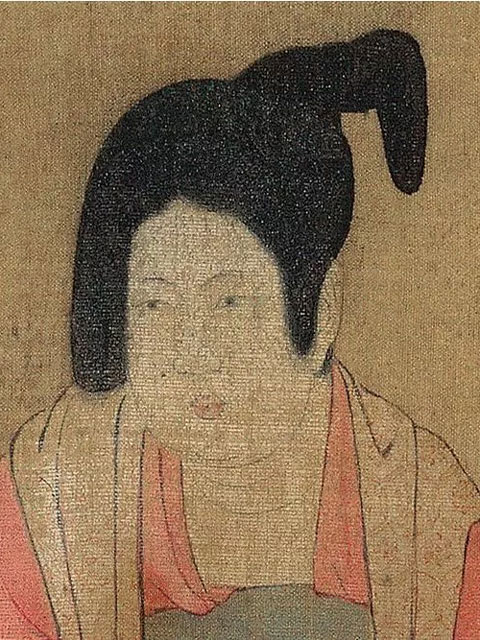 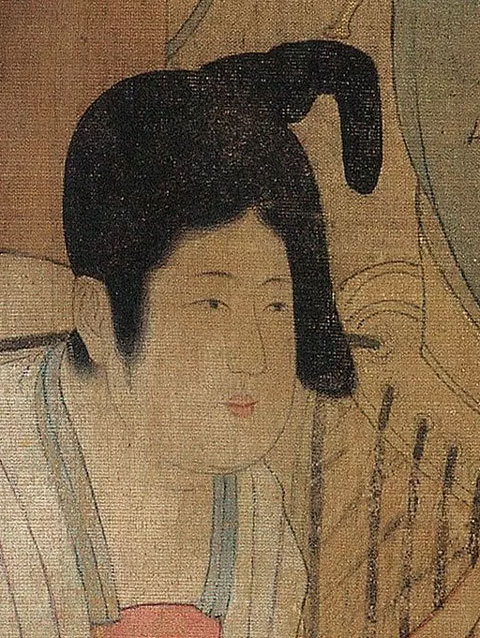 The shape of the Duo Ma Ji is the hair falls between the ears and is combed towards the face, and the bun is not located in the middle of the head, but to the side. It is also known as the "Pao Jia Ji".

This kind of bun is especially common in the late Tang Dynasty. In the famous "Lady Guoguo's Spring Outing", you can see the image of woman wearing the Duo Ma Ji.

Wo Duo Ji also has the form of double sideburns holding the face, with single or multiple buns placed on top of the head from back to front. It is also known as a Wu Man Ji (乌蛮髻). 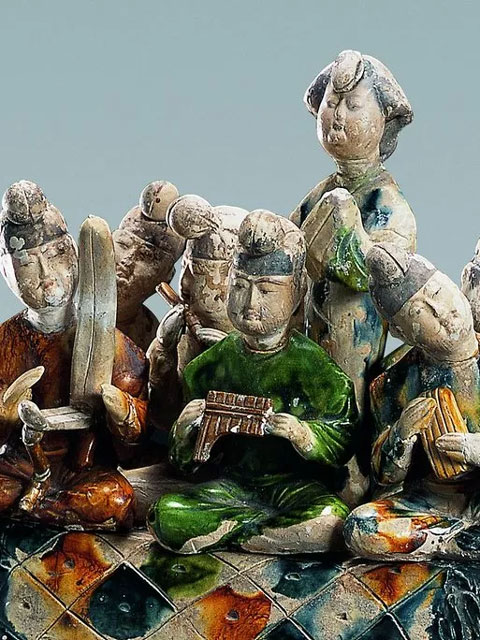 Many female standing figurines in the Tang Dynasty had this hairstyle, which is particularly vivid with their standard rounded faces. 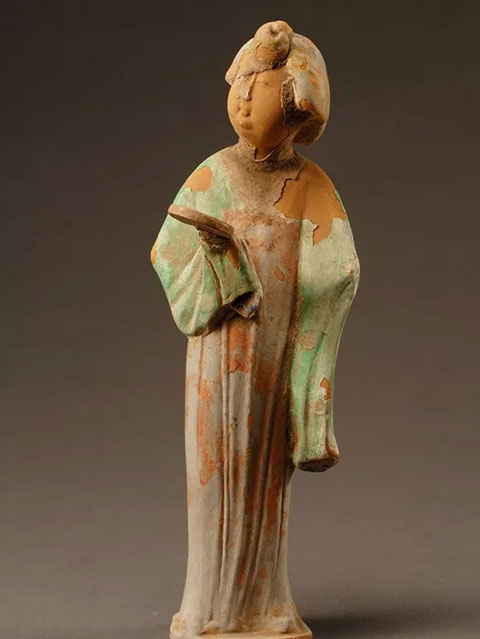 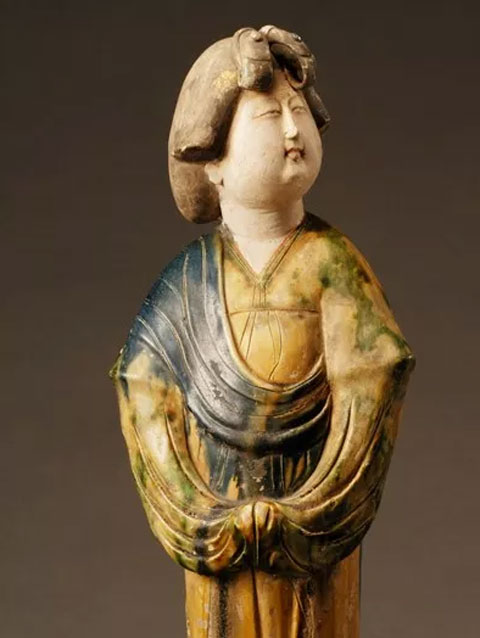 Ban Fan Ji is a hairstyle formed by combing the hair upwards on the top of the head and then turning it forward or backwards, and can also be subdivided into single Ban Fan Ji and double Ban Fan Ji. 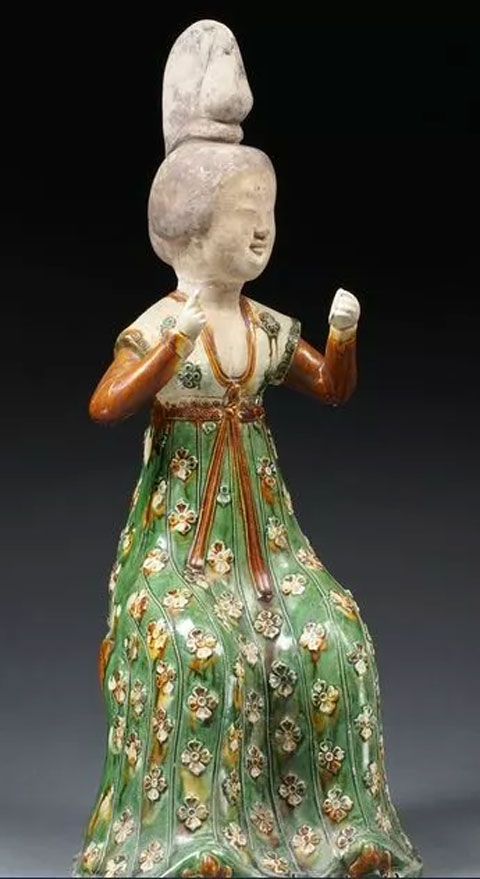 This kind of hair bun is popular for a long time, from the early Tang Dynasty to the Sheng Tang period can be seen. It seems to visually enhance one's height.

The female figurine in the picture, for example, wears a single Ban Fan Ji, a small-sleeved Shanqun with an embroidered Beizi, and flowers embroidered all over the folds of the skirt. She is holding a small mirror in her left hand, and her right hand seems to be intending to do some make-up.

The name comes from the fact that the small bun resembles the character "丫", which is a playful hairstyle. 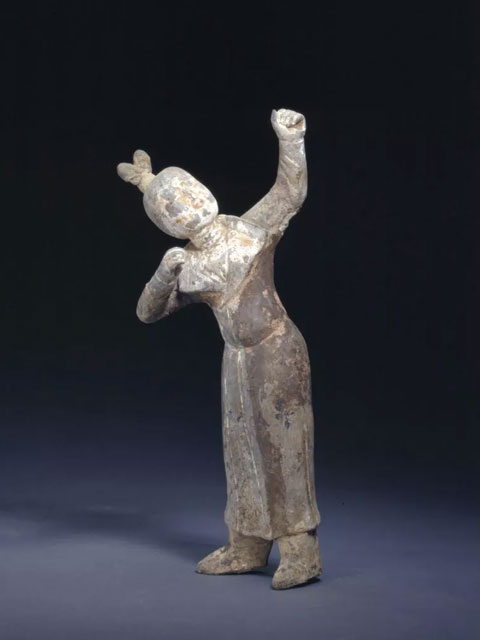 The female figurine in this picture is wearing a Ya Ji, a narrow-sleeved robe with a lapel collar, a belt around her waist, and wear boots. Her head is tilted to the left and her hands seem to be holding a bow for hunting.

The slightly exaggerated bun on the head of this female figurine is a double-ring Wang Xian Ji, and the costume she wears is a dancer's dance dress. 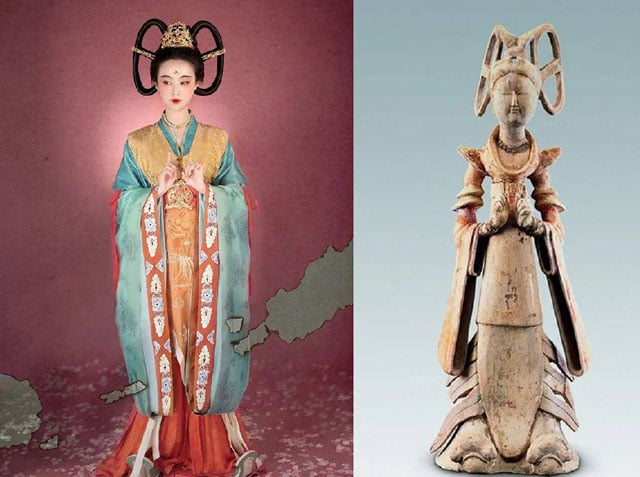 The double-ring Wang Xian Ji was often worn by dancers, and some unmarried girls also liked to wear it.

Such a bun has a sense of non-daily performance dressing at first glance. It would have been difficult to make and keep such an exaggerated hairstyle by using only hair. Therefore, some scholars speculate that the two large hair rings of the Wang Xian Ji should have been supported by metal wires.

Shaped like a conch, it can also be subdivided into single and double Luo Ji. 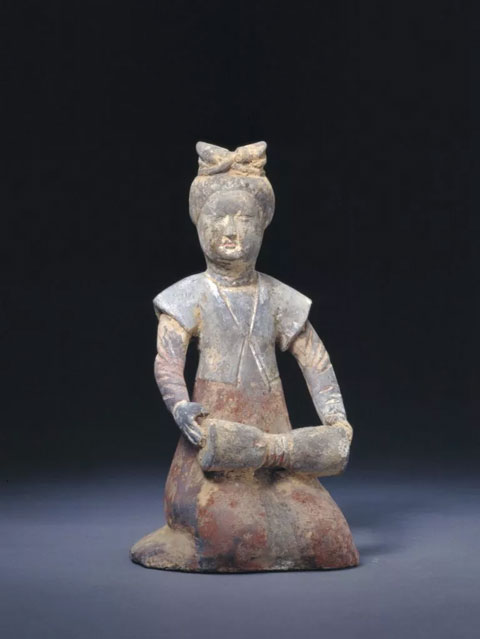 The female figurine in this picture is wearing a double Luo Ji, a narrow-sleeved Shan with a Beizi, and a long skirt. She is seated with her hands holding a drum, as if she is playing.

The very tall bun, can also be subdivided into different types depending on the shape of the bun. 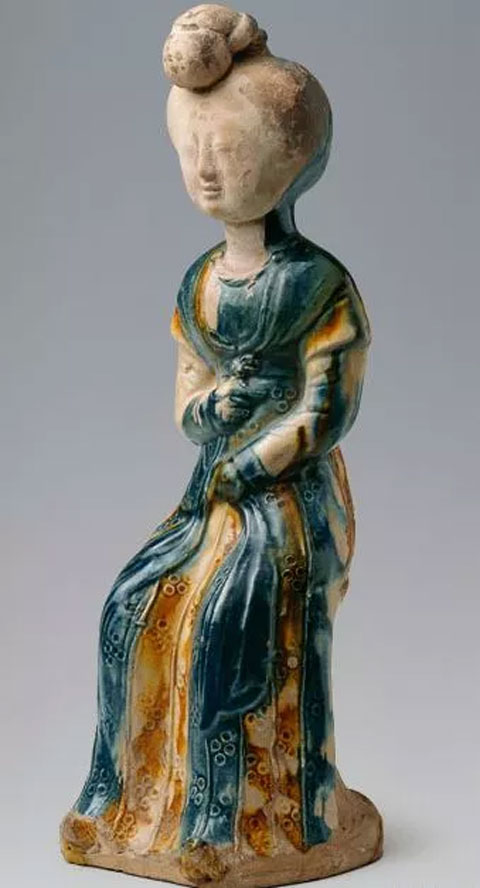 The female figurine in this picture is wearing a single Gao Ji, a tan collar, narrow-sleeved Shan, a long skirt, and a Pibo, with her hands on her chest and abdomen, sitting on a pier-shaped seating device.

Hair bun into two small balls on either side of the face. This hairstyle seems to be more age-defying. 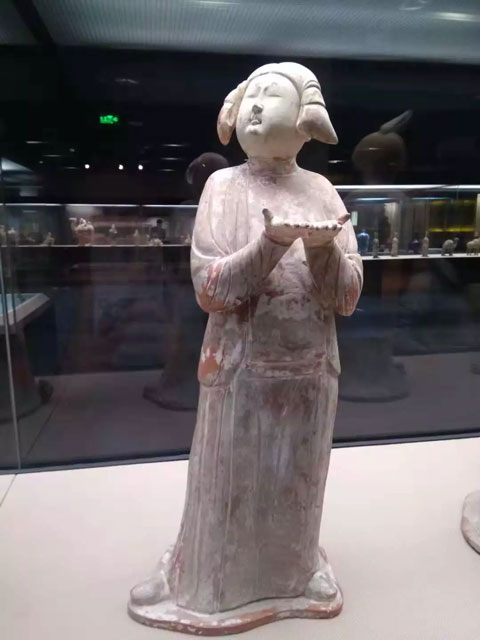 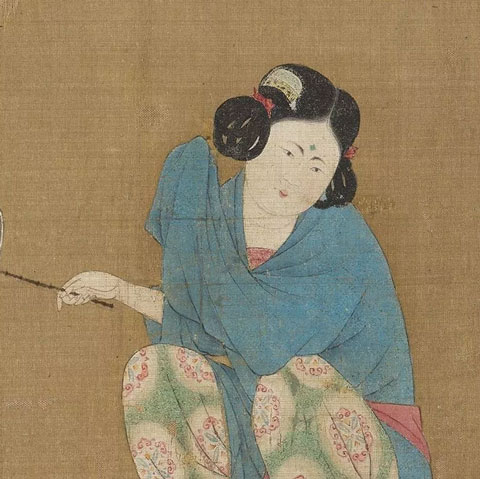 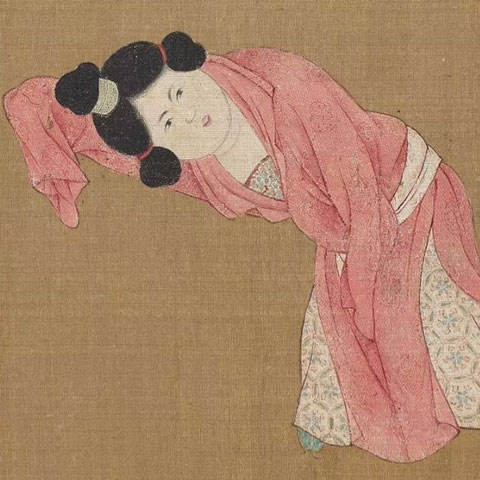 These Tang Dynasty hairstyles mentioned above can also be summarized in the chronological order of their popularity into a history of the evolution of trendy hairstyles for female figurines in the Tang Dynasty.

In the early years of Tang Dynasty, female figurines had low and flat buns with fewer forms. After that, the bun became more diverse, and the Ban Fan Ji can be seen as a popular fashion.

In the Xuanzong period, various kinds of Gao Ji and Wo Duo Ji became the mainstream, after Tianbao period, Duo Ma Ji is the main, and the image of the maid is mostly seen Shuang Chui Ji.

The change of hair fashion of female figurines. 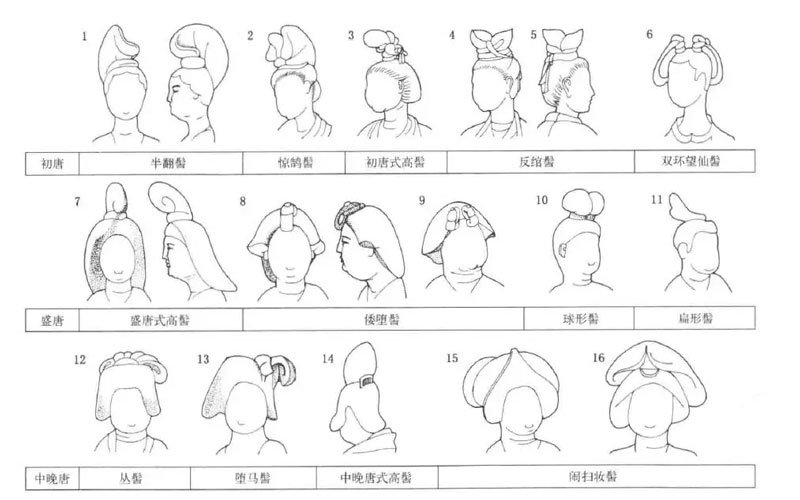 Are you more envious of the hair volume of the Tang Dynasty people than the versatile hairstyles? In fact, there are many tall buns, not all with their own hair combed into, but the application of wigs. 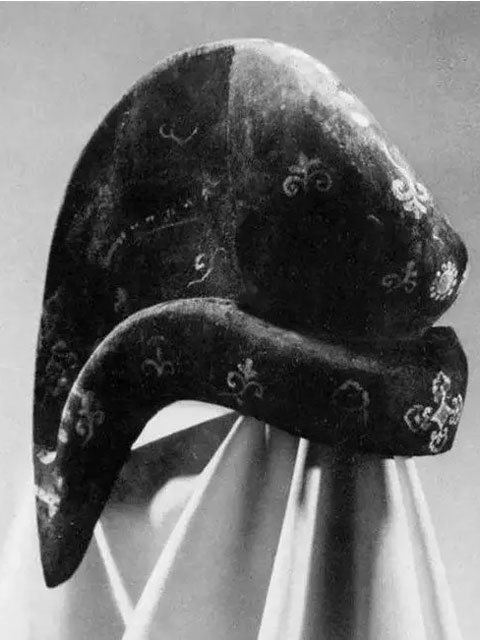 The next time you see a Tang figurine in a museum, can you recognize the charming hair bun style on their heads?

Eddie
Creative License: The article is the author original, udner (CC BY-NC-SA 4.0) Copyright License. Share & Quote this post or content, please Add Link to this Post URL in your page. Respect the original work is the best support for the creator, thank you!
Hanfu Hairstyle
Related 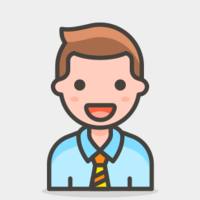