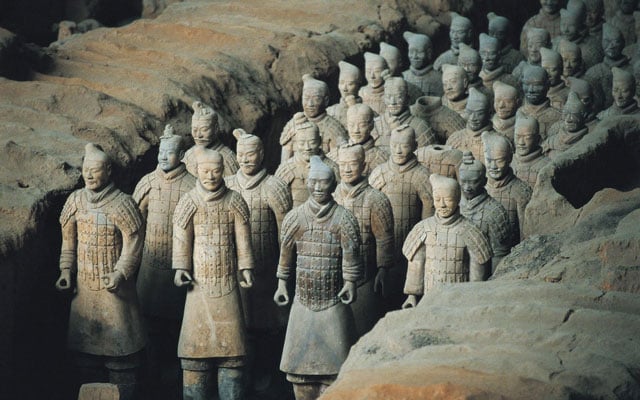 With the help of fire, clay objects and figures could be fired, a process that led to the production of porcelain, which, with different methods, gradually became the domain of almost all the peoples of the world. Since human beings began sedentary life and started to cultivate crops and raise livestock, they began to need ceramic utensils for cooking and serving food, as well as porcelain items for the storage of various contents.

Chinese ceramics have about 8,000 years of history. Each period of antiquity left its own legacy of manufacturing techniques, thanks to which many excellent works were created. Chinese ceramics and porcelain are a symbol of a materialized culture, which combines arts with science and technology, while linking material and spiritual civilization.

The history of Chinese porcelain developed gradually, starting from the gray period, through black and white, to the stage of filigree and colorful, then moving from simple to complex patterns, from rough to refined texture, from prosaic to exquisite.

One of the most famous ancient masterpieces of Chinese ceramics is the Terracotta Warriors from the Tomb of Emperor Shihuang, of the Qin dynasty, located in the city of Lintong, Shaanxi province.

Since 1974, Chinese archaeologists have opened three large subway rectangular pits, in which more than 6,000 terracotta warriors, almost life-size, were found in perfect formation, as well as more than 30 figures of horses similar in design and dimensions to the real animals. There were also about 100 war chariots. All of them form the Museum of Terracotta Warriors and Horses of the Qin Dynasty.

Pit No. 1, the largest of the three, is 230 m long, 62 m wide and 5 m deep. Its total area reaches 14,260 m2. Among the human figures are soldiers, chariot drivers, armed officers and generals on foot, squatting and in other postures.

Trench No. 2 exhibits cavalry troops and thousands of chariots.

Trench No. 3 is the smallest of the three, displaying only 60 to 70 terracotta officers and commanders, in what appears to be a headquarters. All the human and animal figures were exquisitely made.

The warriors dressed in uniforms show facial expressions, as well as hair and beards, of great naturalness, and are characterized by the solemnity of their poses. 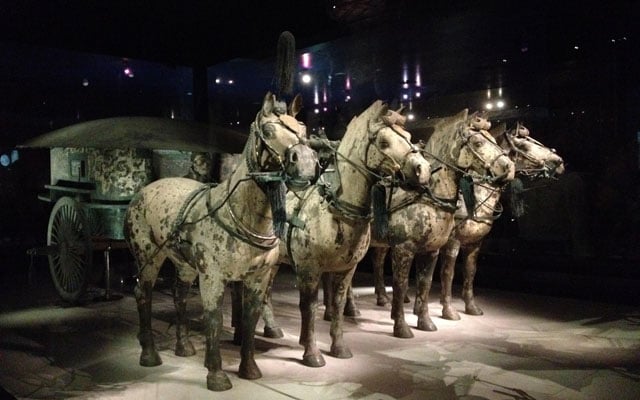 The horses look powerful and ready to ride. The whole army was conceived as an armed contingent that was to watch over the safety of its monarch, protecting the domains of his sepulcher in the other world.

The Chinese of the Qin dynasty paid a high price for building these terracotta troops, but with their dedication they bequeathed to us a priceless treasure of international renown. When former French President Jacques Chirac visited the site in 1978, he said, "Whoever visits China and does not see the terracotta warriors and horses of the Qin dynasty cannot say he has been to the country."

The appearance of "Tang San Cai" (three-color porcelain of the Tang dynasty) symbolized the beginning of the second heyday for Chinese ceramics. "Tang San Cai" works derive from glazed matrices with three fundamental colors: yellow, green and white. This craft technique is very famous all over the world and developed from the green and chestnut ceramic pottery of the Han dynasty. 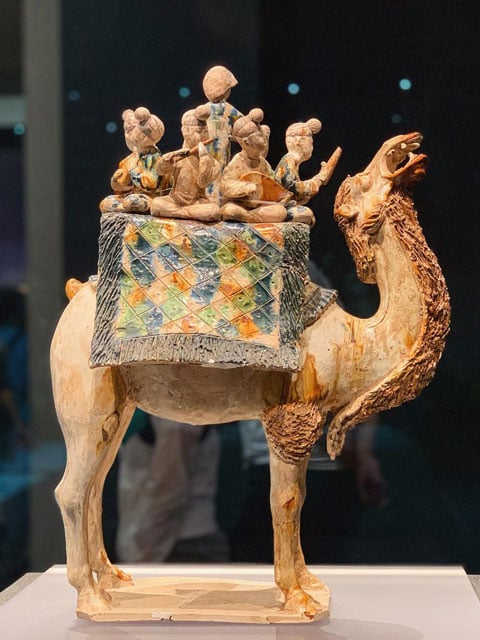 There is a well-known figure of this type: a Tatar with blue eyes and a red beard, dressed in a shirt with narrow sleeves and wearing a hat with the brims upwards, which pulls a camel. It is the image of a westerner participating in the camel caravans of the Silk Road. 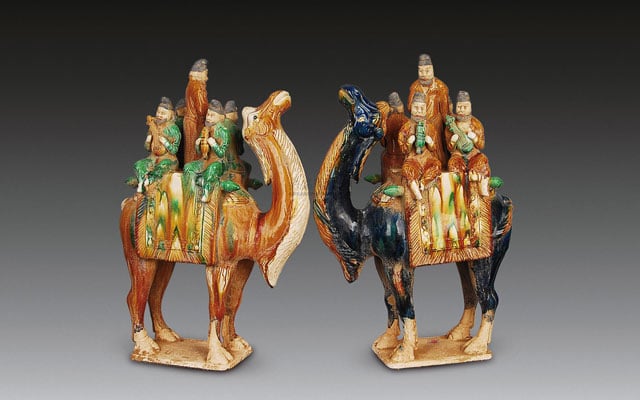 The three-color porcelain of the Tang Dynasty emerged more than 1,300 years ago, after which it absorbed some particularities of traditional Chinese painting, sculpture and other techniques. It used a colored glaze on the surface of porcelain, which was then fired in a kiln at high temperature. The heat operated chemical changes on the mixture of glazed colors, which took on curious shapes in the final product.

The "Tang San Cai" is considered a landmark of China ceramic industry.

The invention of "Zisha Tao" (purple porcelain) marked the advent of the third heyday of Chinese ceramic production.

"Zisha Tao" artifacts were made from unglazed, high-ferrous purple clay after being subjected to 1,200 degrees Celsius heat. All the works have a fine and exquisite appearance, and exhibit different colors and shades, depending on the proportions of iron contained in the clay. 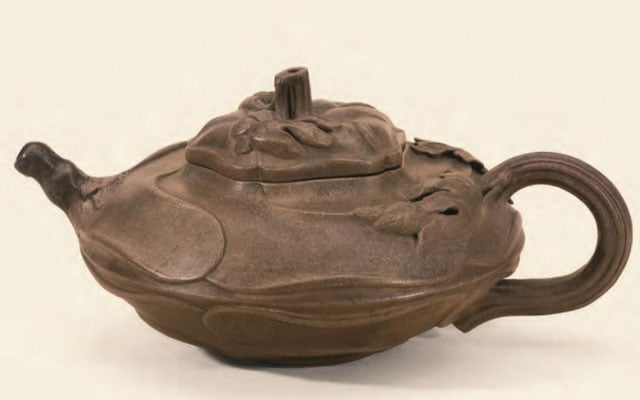 These objects were made by inlaying ceramic fragments on the exterior, or by immediate pressure casting. In the cases of select ceramics, their manufacturers were high-class potters, who in turn undertook mass productions of cheaper objects by slurry injection, according to historical records from the Song dynasty.

The Ming and Qing dynasties were the most prosperous periods for the production of purple porcelain. At that time, the most famous objects were made in Yixing, a city in Jiangsu province, at exorbitant prices for the highest quality works. The "Zisha Tao" products are ideal as tea services, due to their resistance to heat and ability to maintain the fragrance and quality of the leaves of that plant in hot water.

China is known worldwide as the "Cradle of Porcelain", even the word "China '' is synonymous with a type of high-quality porcelain.

Ceramics is the generic name for clay objects, or the mixture containing clay as the main ingredient; porcelain differs from pottery in that it uses special earth, which includes kaolin, feldspar and quartz, stones or minerals containing these elements as raw materials, mainly ferrous matter. 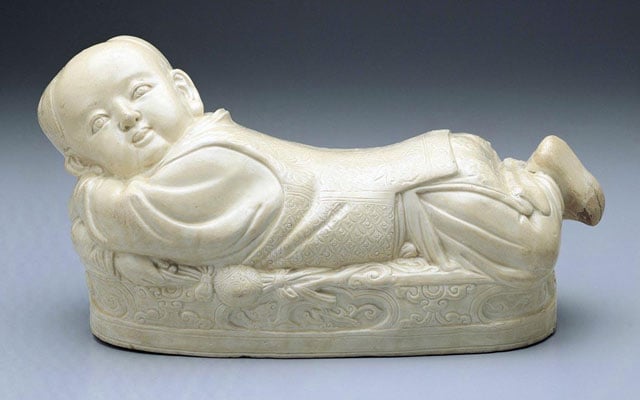 The molded pieces made with these materials and the varnish are fired at temperatures ranging from 1,200 to 1,300 degrees Celsius.

The final product is a white, rigid piece that does not absorb water. When it collides with other objects, its surface emits metallic sounds.

After the appearance of lead-glazed porcelain, proto celedon, and white porcelain, Blue and white pottery became the main representative of Chinese porcelain, which had its most prosperous period in the Song dynasty. At that time six varieties were produced in an equal number of mines in Dingyao, Yaozhou, Junyao, Cizhou Yao, Longquan, and Jingdezhen. 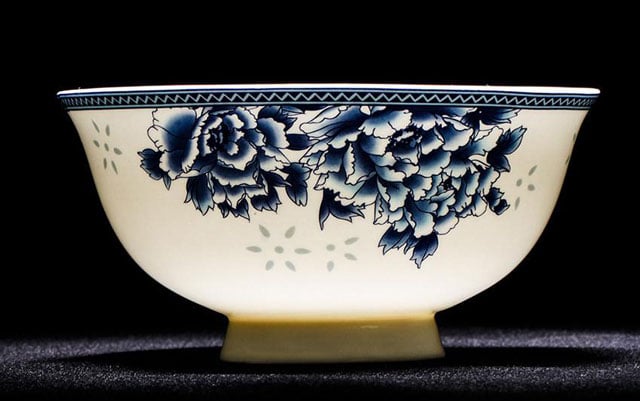 Their products satisfied popular demand. There were also several imperial-type mines, such as Ruyao, Geyao, Dingyao, Junyao, Guanyao. The celadon porcelain objects of the Yuan dynasty were characterized by their large volume.

Their decorations are delicate drawings made with light blue color, protected by a layer of "Yingqing" glaze. The most high-class productions were those produced by the Fuliang porcelain workshop.

Most of their products were voluminous and of a natural, solemn, and coarse style, generally designed for everyday use by the common people. They were decorated with images of pine trees, bamboo, plum trees, lotuses, dragons, phoenixes, birds, deer, herbs, men, and flowers. Some even bore motifs based on historical sagas. 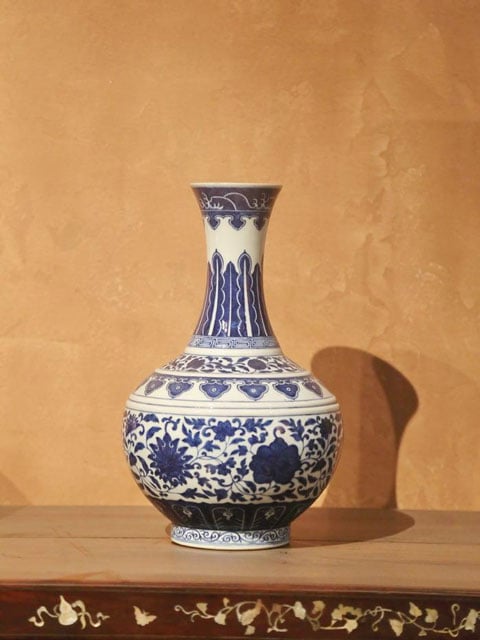 In the Ming and Qing dynasties Chinese potters maintained the best of the tradition of the previous empires, taking it to new heights. The most representative works were made in the workshops of the city of Jingdezhen, in Jiangxi province, known as the "center or capital of Chinese porcelain."

It used to be said of that city that its porcelains were "as thin as paper, as glittering as a mirror, as white as snow, and as sonorous as a jade bell." This demonstrates the perfection of porcelain produced in the Ming and Qing dynasties.

The Chinese Music and Its Instruments

The Application of Annual Popular Color in Hanfu -- Classic Blue