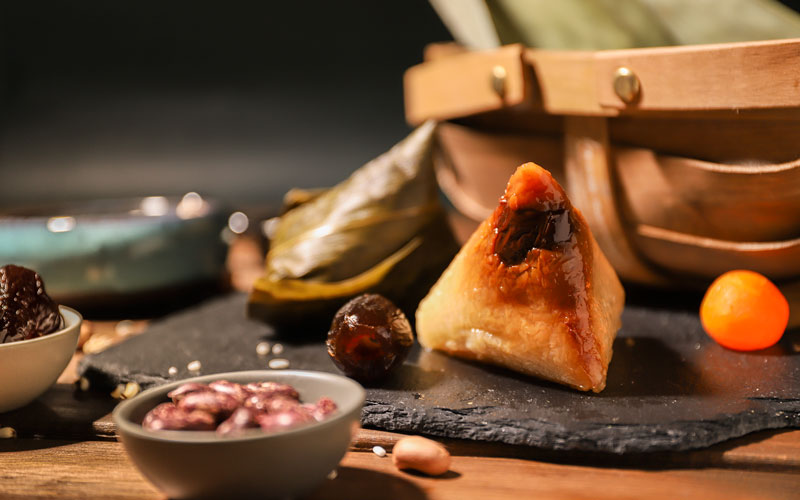 The origin of the Dragon Boat Festival

About the origin of the Dragon Boat Festival, there are a variety of legends, one of the most recognized by the Chinese people is to commemorate Qu Yuan, the famous poet, and patriot.

Qu Yuan (340-278 B.C.E.) was from the Chu state in the period of the fighters. Among the seven Qi, the Chu, Yan, Han, Zhao, Wei, and Qin states, the last one was the most powerful and wanted to annex the other six. Qu Yuan was an official of Chu. He was noted for his intelligence and erudition. 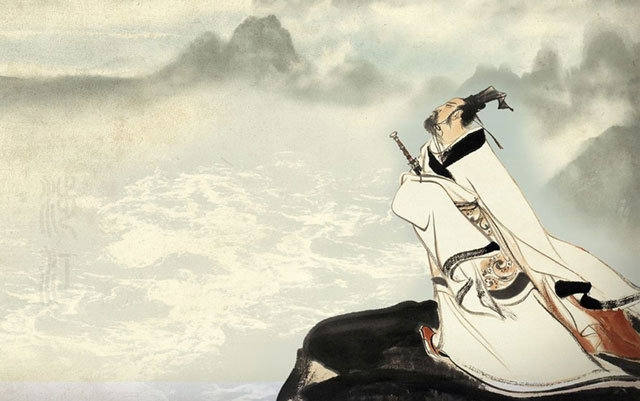 He advocated implementing reforms and insisted on uniting neighboring states in resistance against Qin. However, he was unable to implement his ideas due to obstacles raised by a handful of disloyal opponents. The ruler of Chu relied on the words of the disloyal officials, did not take Qu Yuan's suggestions and expelled him from the capital of the kingdom.

After withdrawing from the capital, Qu Yuan still paid attention to Chu's fate. After learning that Chu was defeated by Qin, the sad Qu Yuan felt very sore and ashamed and regretted that he did not have the opportunity to sacrifice himself for the motherland. He finally committed suicide by throwing himself into the Miluo River. The day of his suicide was precisely May 5, 278 B.C.E. according to the lunar calendar.

People flocked to the river to retrieve his corpse. But they did not find him. So that the fish would not eat him, the people threw food into the river. From then on, people repeated this action on May 5 every year. 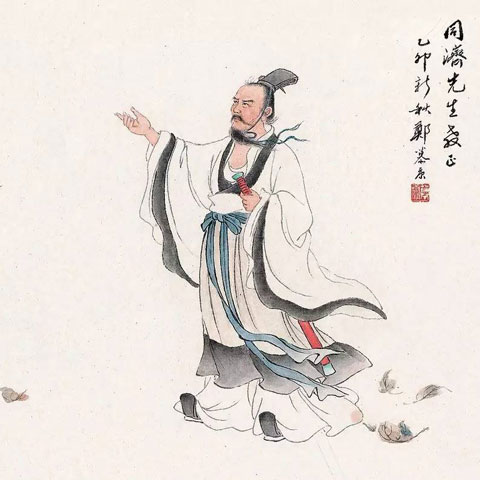 According to a legend, once there was a person who saw Qu Yuan, and he told him that" the Dragon King of this river stole all the food you gave me so that the Dragon would not steal it, you could wrap the food with bamboo leaf, and bind it with colored thread because the Dragon is afraid of him. So subsequently, people have the custom to eat Zongzi on that day, and Zongzi became a traditional food.

Then on the fifth day of the fifth month of the lunar calendar, Chinese people have the custom to prepare Zongzi, hold "dragon boat" competitions in memory of the great poet.

There is another legend about the Dragon Boat Festival, it has to do with another historical figure Wu Zixu. Wu Zixu was from Chu state in the fighter period, because his father and brother were killed by the king of Chu, he escaped, went to Wu state, helped Wu to conquer Chu state. And subsequently, the war between Wu state and Yue state started, at the end of the war, when Wu state was going to get victory of the war, Wu Zixu proposed that he did not allow the Yue state's request for reconciliation, but the king of Wu did not listen to Wu Zixu's advice, and committed suicide, and said that they put their eyes on the entrance of the city, so that he could see how his state would lose the war. When he knew all that the king of Wu was furious, he threw Wu Zixu's corpse into the river on the fifth day of May by the Chinese lunar calendar. That is why that day also commemorates Wu Zixu.

There is the third legend that the Dragon Boat Festival was to commemorate "Cao E", of the Eastern Han Dynasty (25-220). Cao E's father drowned in the river, but for many days his father's corpse does not appear. Every day Cao E cries for her father, day she jumped into the river, and committed suicide, but five days later, she came back alive and managed to find her father's corpse. To commemorate Cao E, later people built temples, put their village and the river in Cao E's name.

During the Dragon Boat Festival, many traditional activities are held, such as dragon boat competitions, eating Zongzi, putting up the "Ai" leaf, etc... 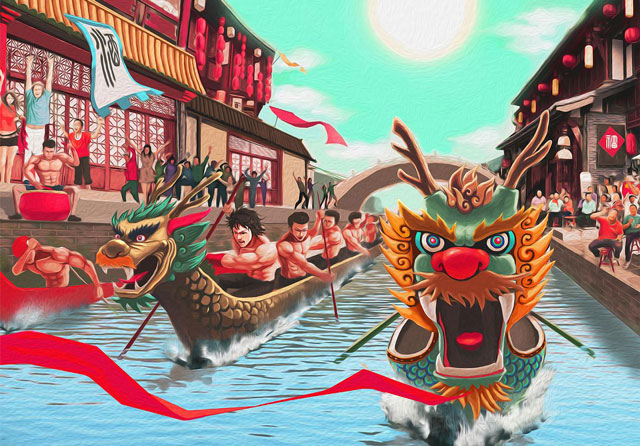 Eating Zongzi at the Dragon Boat Festival is a very important traditional Chinese custom of eating Zongzi. There are different kinds of Zongzi, and Zongzi also carries an Autumn, it is wrapped with Jiaobai leaf (the water bamboo), horn-shaped, it is called "Jiaoshu", or cooking with bamboo, it is called "Tongzong". 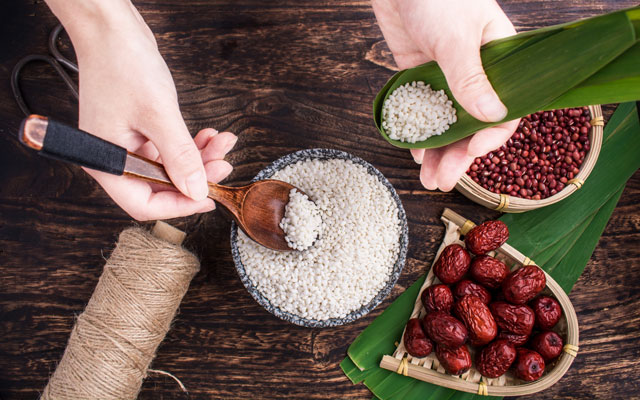 It was officially designated Zongzi as the food of the Dragon Boat Festival in the Jin Dynasty (265-420). In that season, many varieties of Zongzi appeared, for example, rice with meat, with chestnut, with red beans, etc.. At the same time, Zongzi was used as gifts to friends and relatives. When the Tang Dynasty came, it was described that Zongzi rice resembled jade, in the Japanese document, there is a note about Zongzi of the Tang Dynasty. Until the Song Dynasty, Zongzi stuffed with fruit preserve appeared, the famous poet Su Dongpo described it, he described that "Bayberry appears in Zongzi". During the Yuan Dynasty (1279-1368) and the Ming Dynasty, the leaves of different bushes were used for wrapping Zongzi, stuffed with red bean paste, pork, walnut, etc..

Nowadays when Cinco de Mayo comes on the Chinese lunar calendar, people prepare bamboo leaves and rice to make Zongzi. In the north of China they stuff it with date, however in the south, they make it with more varieties, stuffed with bean paste, meat, ham, egg yolk, etc... The custom of eating Zingzi has lasted thousands of years in China, and spread to Japan, Korea, and other Southeast Asian countries.

Putting the leaf of "Ai" (a kind of plant)

There is a folk proverb that says: "On Qingming Day you put up wicker, and on Dragon Boat Day you put up "Ai" (a kind of plant). For popular belief, May is a poisonous month, because harmful insects come out, they harm humans. So on Dragon Boat Festival all families clean the house, and put "Ai"(mugwort), or "Changpu" (calamus) on the door, so that the harmful insects will not enter. The herb "Ai" she exhales a pleasant smell, this perfumed smell can expel the harmful insects. "Changpu" is a water plant, its leaf also has a perfumed smell, it has the same function of "Ai". People use them as antiseptic medicine. In the old days, the Dragon Boat Festival was also called the Health Festival. 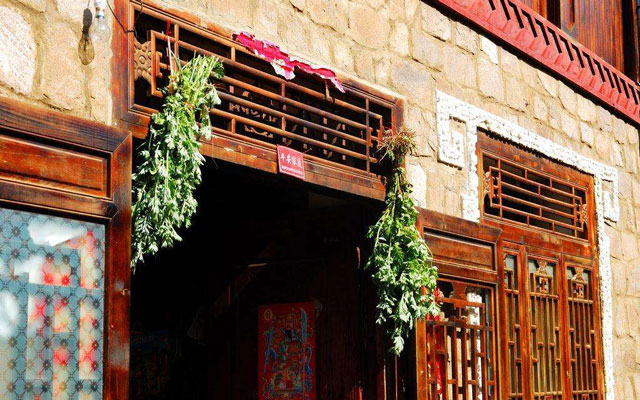 "Zhong Kui Zhuo Gui - the Chinese ghost hunter" is also an important element in the Dragon Boat Festival. In the Jiang-Huai area, in every house there is the figure of Zhong Kui. It is said that the origin of the legend of Zhong Kui is as follows: King Xuanzong (685-762) was sick, he dreamed that two monsters were chasing him, one in red clothes, he stole his scented pouch and Queen Yang's flute, and there was another monster in blue clothes, he stopped the other red monster, he ate it, King Xuanzong asked him his name, he replied that his name was Zhong Kui. He wanted to expel molos monsters for the king. 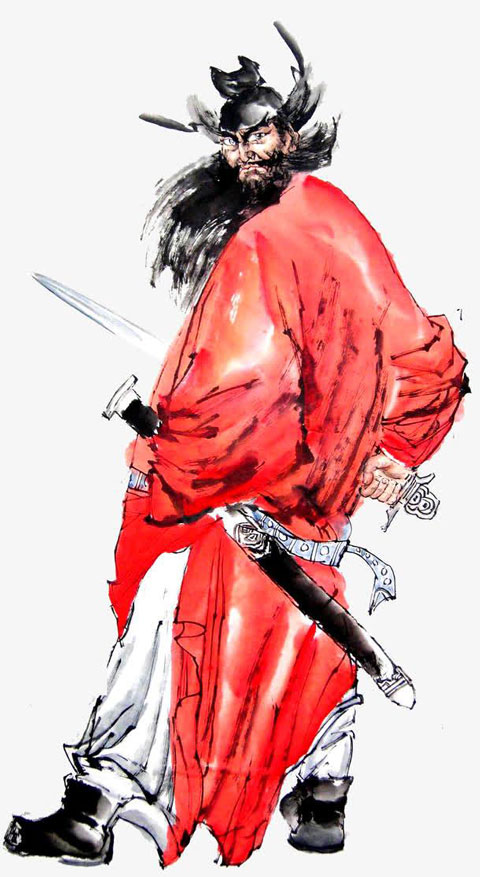 And immediately the king woke up, he gave an order to the painter Wu Daozi to paint the portrait of Zhong Kui, from that time on every fifth of May people put a painting of Zhong Kui's figure so that the evil monsters do not enter the house.

In the Yangtze River area, there is a custom of drinking "Rejalgar" wine (Xionghuang Jiu). "Rejalgar" is a medicinal wine, it contains arsenic sulfide, has the function of killing uncertain bad guys. According to a popular legend, the Biography of the White Snake, said that there was a white snake turned into a beautiful and good girl, once when she drank the wine "Rejalgar", she came back in the shape of a snake. People believe that "Rejalgar" wine can expel bad bugs and protect health. 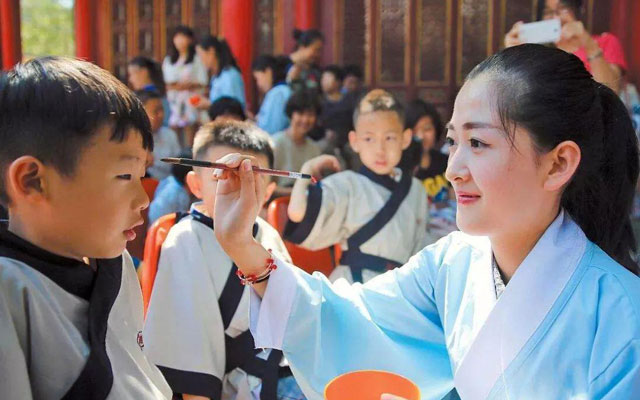 At the Dragon Boat Festival, there is a custom to put a scented bag, it is said that this bag has the function to avoid bad luck, and actually it is also a decorative ornament on the clothes. The scented bag is made of silk, a fine and beautiful thing, with different shapes it contains cinnabar, realgar, and scented substances.

Nowadays the Dragon Boat Festival has formed a great festival in China, and the folk legends have been given millennial vitality. According to state regulations, since 2009, a vacation is given at the Duanwu Festival.

More about Dragon Boat Festival & Chinese traditional clothing you may like:

Ling
Creative License: The article is the author original, udner (CC BY-NC-SA 4.0) Copyright License. Share & Quote this post or content, please Add Link to this Post URL in your page. Respect the original work is the best support for the creator, thank you!
Traditional Festivals
Related