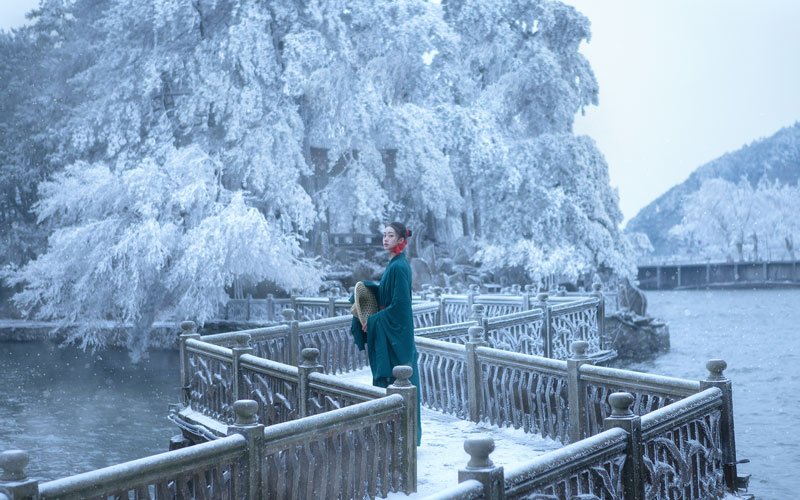 In fact, in the light of current phenological studies, this statement does correspond to historical climate trends.

With so few materials remaining from primitive societies and the pre-Qin period, it has become difficult to determine the exact style and material of clothing. Take the Tang and Ming dynasties, which are very typical of the style of dress, and see how the climate influenced the development of Hanfu.

Why is Tang-style Hanfu more suitable for summer? This is because the Tang Dynasty period is relatively warm. 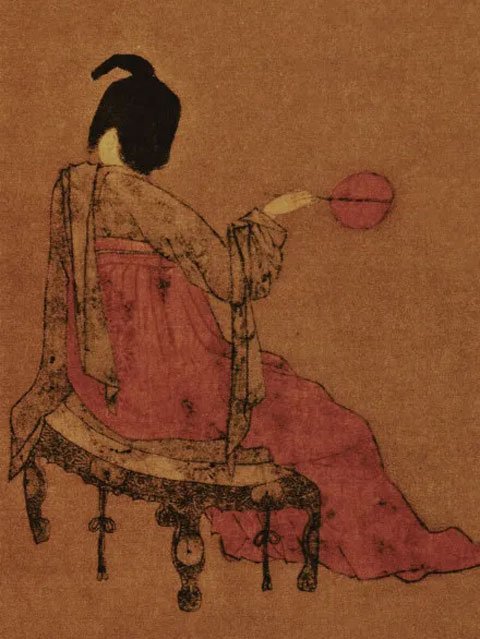 According to the literature, the Tang dynasty had "nineteen snow-free and ice-free years in winter and spring, the highest number of any dynasty in Chinese history". In addition, biological phenomena such as the growing areas for warm area crops such as litchi, citrus, as well as areas for tropical animals. For example, during the Tang dynasty, Hunan, Sichuan, and Guizhou all offered rhinoceros horns to the imperial court, implying that there was a widespread presence of wild rhinoceroses in these areas, which prefer a warm, moist climate and are now only found in the tropics, evidence that the Tang dynasty was indeed warmer than modern times.

From this point of view, the disappearance of the Yaolan (腰襕) form of the "Ru (襦)," and the shift to the popular single-layer "Shan (衫)", can be traced.

In terms of material, in the period of The Wei, Jin, and North-South dynasties, the climate was cold and dry, and wool knitting Chanyu (襜褕, a kind of Zhiju) and robes, as well as animal-skin furs, were popular at the time. As the climate warmed in the Tang dynasty, the thicker garments were replaced by silk and linen-based fabrics.

This is confirmed by archaeological excavations of Tang dynasty figures and some murals in tombs, where men, women, and children of all ages were thinly dressed. The Tang dynasty Tan collar with large sleeves Shan was the most open style of women's clothing in the history of Chinese feudal society. In addition to the social climate and the openness of ideas of the time, the warm climate of the Tang dynasty was also an extremely important factor. 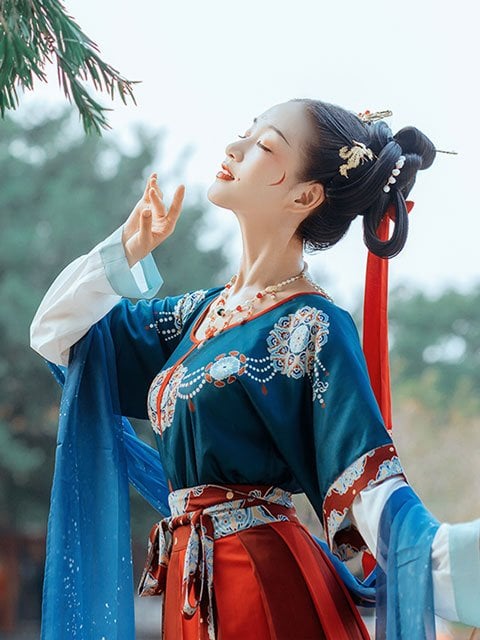 However, by the late Tang dynasty, at the end of the eighth century AD, the climate turned drastically colder again. Some of the paintings show skirts from the late Tang period with new designs for warmth, as well as the addition of a robe to the skirt, which may have been considered in the context of keeping warm.

Why is Ming-style Hanfu more suitable for autumn & winter? Because the Ming Dynasty was really cold.

When we talk about "Ming-style Hanfu", the most typical is the Aoqun (袄裙). This thick style of clothing originated with the nomadic peoples of the north. It became popular during the Southern Song Dynasty, when there was close contact with ethnic minorities.

In contrast, in earlier times, the clothing of the nomadic peoples tended to change with Han customs, notably becoming thinner and lighter. This was the case in the Tang and Song dynasties. In the Ming dynasty, however, clothing styles were maintained for a long time. There were cultural factors such as the relatively conservative social ethics of the Ming dynasty, but the temperature was also a major factor. 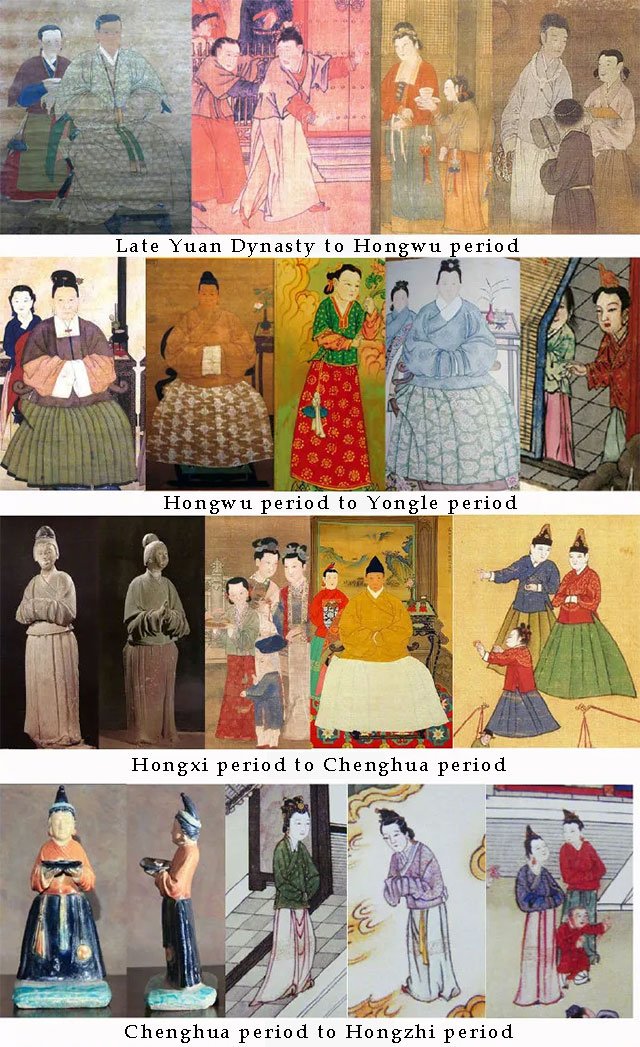 In the early Ming dynasty, the climate was not exactly warm either. In the early Ming, Yao Guangxiao wrote in his Collected Poems of Taoxuzi (姚广孝, 逃虚子诗集): "On the 21st of December, the boat left Fengqiao, encountered a strong wind, and the river froze" (“十二月廿一日舟出枫桥，遇大风，河冻”). Fengqiao was located in Suzhou (苏州), but the temperature was so low that the river froze, which shows how cold the climate was at that time. It is understandable that the clothing that was warm enough to keep warm was commonly worn by women during the Ming dynasty.

By the mid to late Ming Dynasty, the climate had turned further cold, and Li Rihua (李日华) wrote of Jiaxing in the early spring of the 39th year of the Wanli era (1611): "It was very cold. The rivers were all frozen and the ships stalled" (“寒甚。河流俱冻，舟楫停滞”). This shows that the south was extremely cold at the end of spring and the beginning of summer. 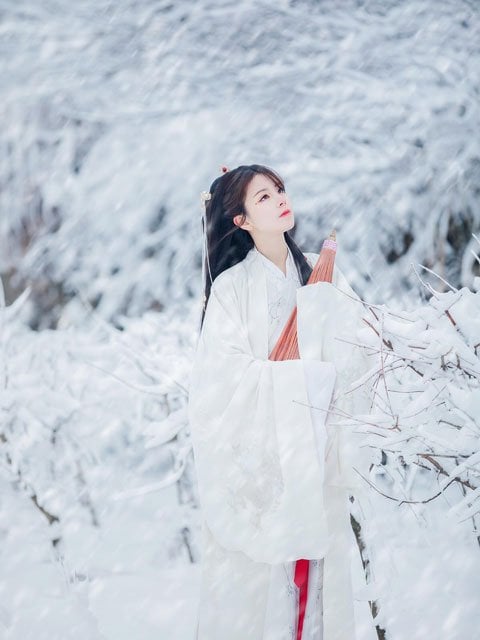 Today, rime is basically only found in the northern regions in winter, but under the harsh cold climate of the Ming Dynasty, it became a perennial phenomenon throughout the northern regions, which shows that the climate was unusually cold. As a result of this climate, the style of dress of the Ming dynasty also developed a style in which the top of the garment was knee-length.

In addition, the popularity of stand collars closed by buttons during the Ming dynasty should also be related to the drop in temperature. In terms of accessories, the plush 'Wotu (卧兔儿)', typical of the Ming dynasty, also became widespread only during this cold period. 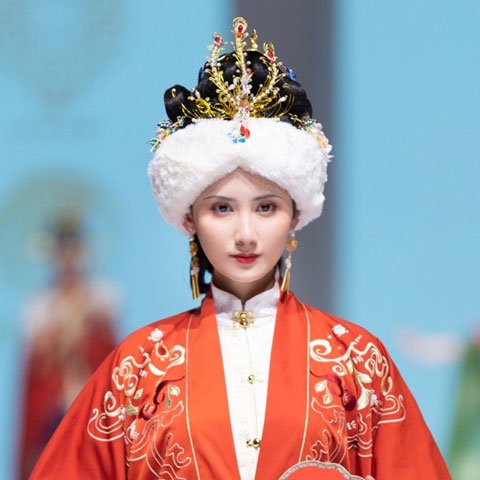 The Relationship between Clothing and Climate

The factors that influenced the changes in costume in ancient China are generally focused on the socio-cultural evolution of society. However, unlike works of art such as architecture, sculpture, and vessels, the decorative function of clothing, as art is worn directly on the human body, is often based on a practical function. Starting from the most basic and essential practical function of clothing - keeping warm, the most influential factors in clothing are temperature and climate.

Different climatic conditions have a strong influence on the formation of regional cultural mores, which in turn influence the style of dress. Throughout China's long history, social mores have evolved in much the same way. In the warm Sui and Tang dynasties, social mores tended to be outwardly oriented; in the colder Song, Ming, and Qing dynasties, culture was relatively inwardly oriented. 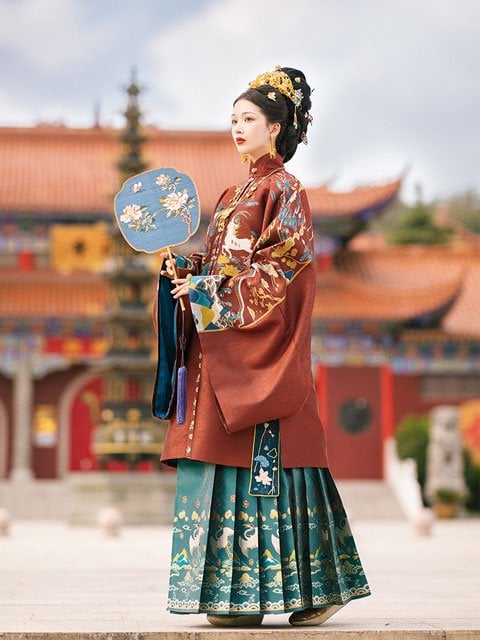 In general, clothing is an object created by man to adapt to the natural world, and it, along with the accessories and make-up that go with it, is bound to be influenced by changes in climate and temperature.

Creative License: The article is the author original, udner (CC BY-NC-SA 4.0) Copyright License. Share & Quote this post or content, please Add Link to this Post URL in your page. Respect the original work is the best support for the creator, thank you!
Ming DynastyWinter Hanfu
Related

How the Ancient Chinese Wear to Stay Warm in the Winter