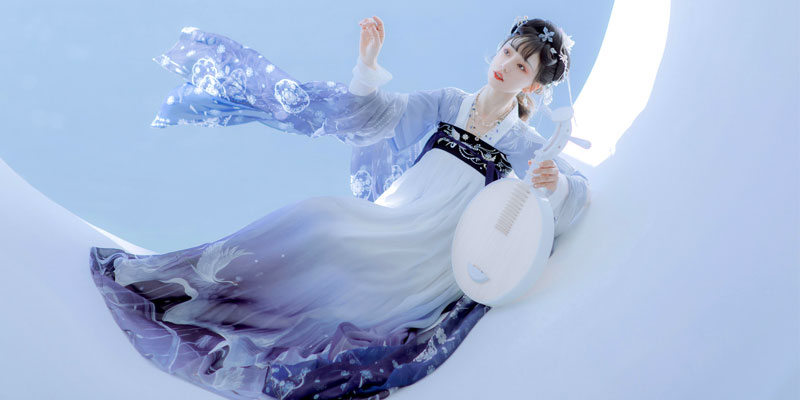 Chinese skirts have a long history in China. As we all know, in ancient times, ancestors joined together with leaves or hides to keep out the cold, and became the rudiments of skirts.

It is said that more than four thousand years ago, the Yellow Emperor established the system of "Shangyi Xiachang (上衣下裳, upper garment, and lower skirt)", stipulating that people of different status wear different colors of clothes. The "Chang" at that time were skirts. 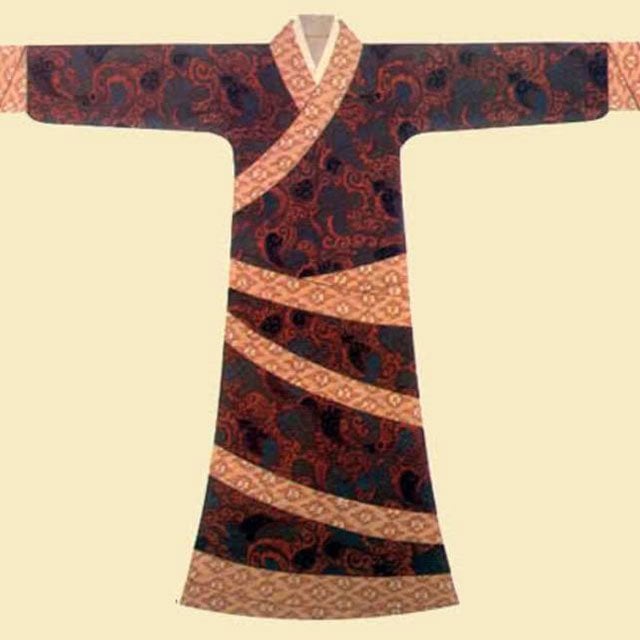 The statues unearthed in Anyang, Henan Province, are wearing flat hats, collars, skirts, belts, and pointed shoes. It generally reflects the situation of clothing in the Shang Dynasty. In the Spring and Autumn Period and the Warring States Period, people generally wore Shenyi, and the upper top was connected with the lower skirt. Shenyi is similar to a dress, but it's slightly different.

In the Han Dynasty, skirts spread, with short tops and long skirts. The clothes of the existing terracotta figures of the Han Dynasty and those of Kabuki have such a clear reflection. At that time, the skirts all had folds, which were called "pleated skirts".

According to the literature, Zhao Feiyan, the empress of Emperor Cheng of the Han Dynasty, dressed in a skirt, danced by the side of the Taiye pool. At the same time, the strong wind rose and the empress was blown by the wind. Emperor Cheng hurriedly ordered his attendants to hold her. Unexpectedly, the attendants grabbed the skirt in panic. The queen was saved, but there were many wrinkles on her skirt. However, the wrinkled skirt looks better than the one without wrinkles before. Since then, the palace ladies have imitated each other. This is the "fairy skirt". 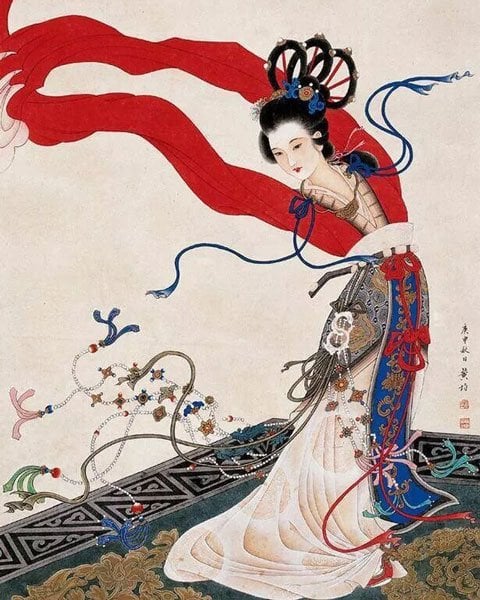 In the Han Dynasty, some ordinary men also wore short skirts. In order to facilitate the work, people wearing skirts lift up their skirts and tuck them into their waists.

The skirt style of the Sui Dynasty basically inherited the style of the southern and Northern Dynasties. In the Sui and Tang Dynasties, skirts became more popular. Some of them increased the size of skirts, making them plumper. The long skirt was particularly popular in the Sui Dynasty, while the interval color skirt was still popular in this period. 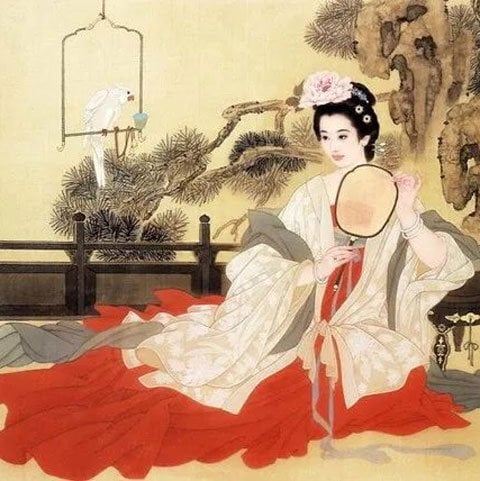 Chinese skirts in the Sui and Tang Dynasties

The skirt length of the Tang Dynasty increased significantly compared with the previous generation. The Tang Dynasty's clothing mainly consists of shirts, skirts, and Pei (帔). The skirt is long and the shoulders are covered with Pei. There are more than 300 poems about Chinese skirts and wearing them in the Tang Dynasty.

In the Song Dynasty, the color of the skirt was mainly plain and elegant, the skirt's body was still very wide, and the common feature was a lot of folds. The patterns on the skirt are more colorful, some are painted, some are embroidered, some are decorated with pearls. A kind of traditional Chinese medicine called Yujin (郁金), dyed yellow is the noblest. 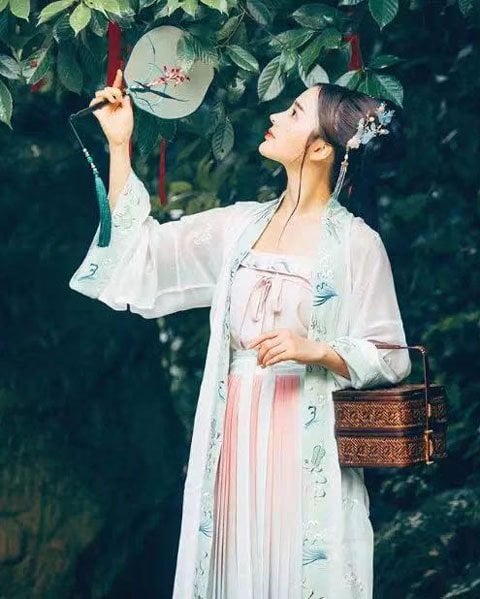 In the Song Dynasty, Ruqun of the Tang Dynasty was adopted as the main dress in daily life. There is often a jade ring ornament hanging on the streamer in the middle of the skirt, which is used to press the skirt, so that the skirt will not lose grace and solemnity when the human body moves in the wind.

In Ming Dynasty, the traditional customs of Han nationality which were destroyed in the period of Mongolia and Yuan were restored, and the skirt shape still preserved the characteristics of Han costume in the Tang and Song Dynasty. Red skirts, once popular in the Tang Dynasty, were popular again in the Ming Dynasty. 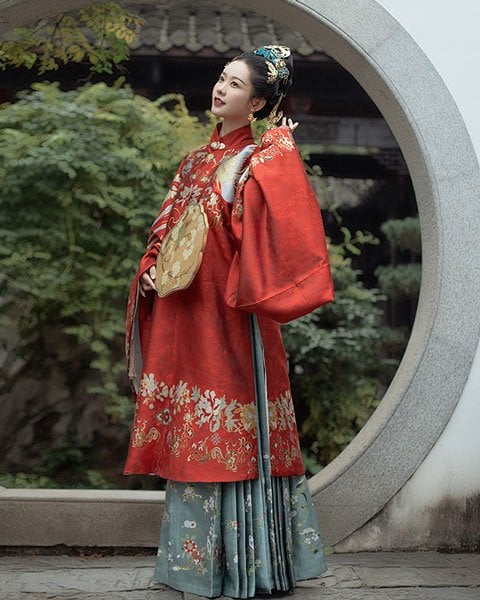 In Ming Dynasty, pleated long skirts were popular, and it was stipulated that people could only use light colors such as purple, peach red and green. However, there are various styles and varieties, some skirts are no different from those of modern skirt. Of course, don't forget that there are also horse-face skirts in Ming Dynasty.

In the Qing Dynasty, the system of "Shangyi Xiachang" of Han nationality was destroyed, and skirts were basically withdrawn from the field of men's wear, but according to the regulations, women still followed the clothes of Ming Dynasty.

In the early Qing Dynasty, Han women's skirts still preserved the customs of the Ming Dynasty, including Fengwei skirts and Yuehua skirts. Later, with the passage of time, there are many new types of skirts. 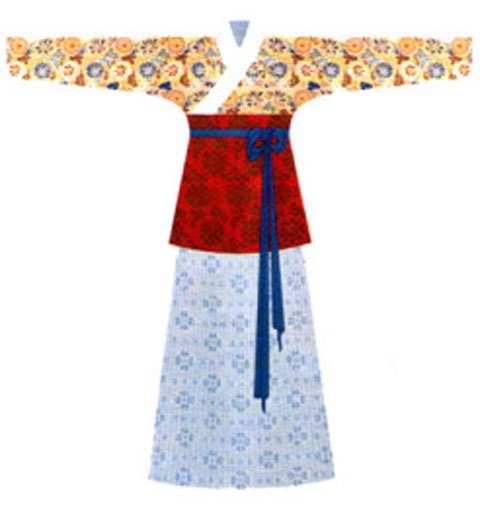 In modern times, Western-style skirts were introduced into our country, which became an important garment for people to wear in daily life and gradually replaced the traditional skirts. In the 1950s and 1960s, influenced by the Soviet Union, Russian style dresses were popular.

During the cultural revolution, skirts were strictly restricted. After the reform and opening up, the skirt dress became popular again. Miniskirts, suspenders, and so on have been introduced into China, and the types of skirts are increasing.

A more systematic description of the traditional Hanfu skirt style can be found by clicking here.