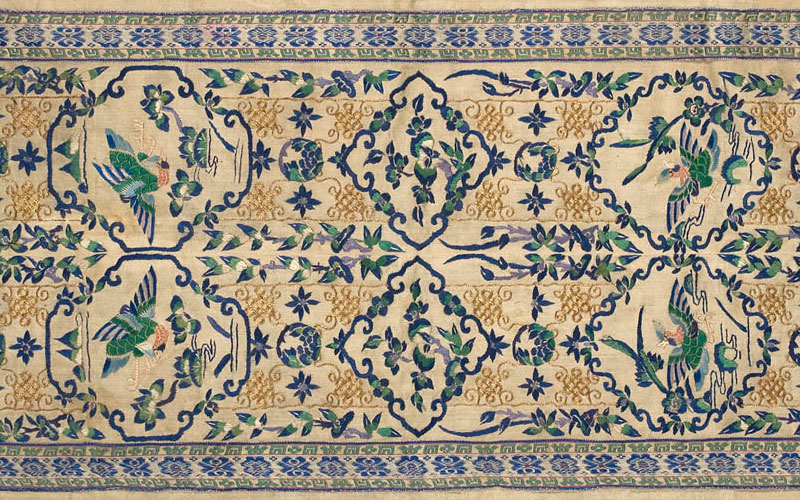 Among traditional Chinese embroideries, there is a very unique type of embroidery: Wanxiu (挽袖), which is the detachable part at the end of the sleeve of a traditional Chinese Qing Dynasty woman’s dress. It is about 66cm long and 13cm wide, and is embroidered in pairs; the motifs range from small bridges and flowing water, pavilions, plum, orchids, bamboo, and chrysanthemums, to Four arts (Qin, Qi, Shu, and Hua), talented men and women, etc. With exquisite patterns and workmanship. 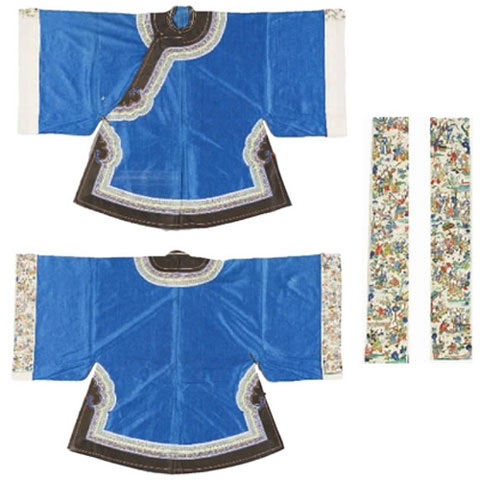 he Wanxiu is both decorative and functional, with thread sewn into the clothes when in use, and rolled out when worn, which is both beautiful and can adjust the length of the sleeves, and women in the Ming and Qing dynasties interpreted their personal understanding on the sleeve pattern, making it a rich and delicate emotional trust unique to women, reflecting the subtle connotation and profound meaning of women’s art.

Han style dress deeply influenced the Manchu court Manchu women’s clothing style, the royal family in order to show the elegance, in the production of excellence, and the integration of the Manchu culture. To the early Republic of China, the influence of Western dress culture, coupled with the embroidered Wanxiu are too costly and material resources, Wanxiu finally withdrew from the historical stage.

Wanxiu culture of the Qing Dynasty is the product of intermingling of Manchu and Han cultures. Although it was subordinate to the clothing edge, it formed an independent object with a complete theoretical and operational system because of its rich subject matter, unique artistic shape, and exquisite embroidery and weaving techniques. Today, these sleeves are either put together as one, or remain only as individual fragments. They are no longer functional, but have become separate artwork and collector’s items to be appreciated.

Wanxiu can be understood as: pulling up the sleeves. In fact, the Qing Dynasty women’s clothing has four kinds of sleeve system structure composition, Shu (舒), Wan (挽), Fan (翻), Chu (出). The sleeve is naturally unfolded as “Shu”, a section of the sleeve is folded upward as “Wan”, the pulled part is folded outward as “Fan”, and a section of the inner sleeve is exposed as “Chu”. 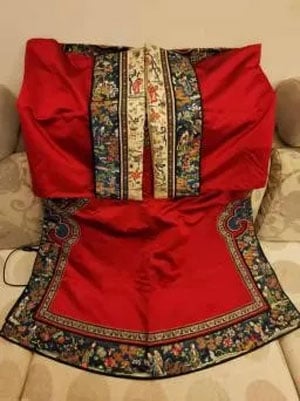 The Wanxiu were originated in the mid-Qing period and was popular until the late Qing Dynasty. Its appearance makes the original wide clothes and sleeves of women’s clothing in the details and color matching more perfect, making the dresser more elegant and charming.

The emergence of Wanxiu and the revival of the wide sleeve form in the Qing Dynasty and the popularity of Han Chinese edge decoration art are closely related. During the Ming and Qing dynasties, the art of dress edge decoration reached its peak, women in costume pay attention to the matching of patterns and the edge of the clothing inlay, especially in the late Qing dynasty traditional women’s clothing trim is developed into a spectacular style of “eighteen Xiang (镶, inlay) eighteen Gun (滚, trim)”, Wanxiu has become an important part of China’s traditional costume culture.

The beauty of the art of Wanxiu is vividly reflected in the beauty of lines, which is expressed by needle and thread skills, using needles instead of pens and threads instead of colors to build up rich lines of stitches and interpret the beauty of embroidery. Silk, satin and other silk fabrics were mostly used in Qing Dynasty Wanxiu, and their production level and artistic characteristics reflected the level of economic development. Since the Qing dynasty incorporated the characteristics of the textile art of the previous generation and at the same time the weaving process tended to be perfected, the crafts used in the Wanxiu of the Qing dynasty were exquisite and complex.

Qizhen (齐针): Qizhen is the foundation of embroidery stitching. The key point is that the starting and ending stitches should be on the outer edge of the pattern, striving for neatness, uniformity, no overlap, and no exposed bottom.

Qiangzhen (抢针): Divided into forward Qiangzhen and reverse Qiangzhen.The embroidery is done from dark to light or light to dark according to the color scheme of the pattern, producing a color halo.

Taozhen (套针): Taozhen is an embroidery stitch in which different shades of color threads are interspersed and knotted to make a natural transition between shades of color.

Gunzhen (滚针): The stitches are close together and form stripes. The long lines formed are more flexible, and the pattern is round, smooth and stiff, as if drawn in one stroke.

Lasuo Xiu (拉锁绣): When embroidering, two needles are needed to embroider at the same time. One needle is stitched, while the other needle moves horizontally and is used to fix the stitch of the first needle.

Dazi Xiu (打籽绣): The lines are wound into small grainy circles, and one stitch is used to form a “seed”. 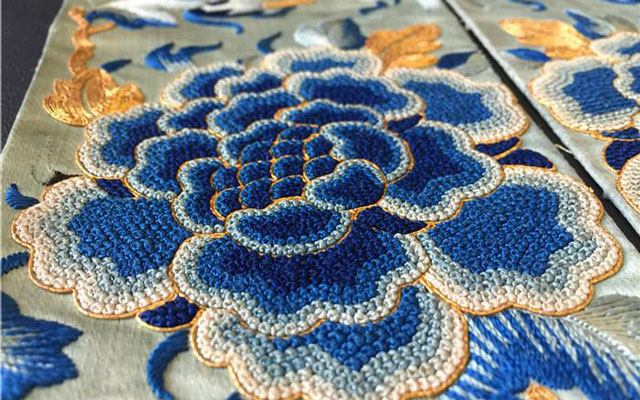 Zhuxiu (珠绣): It refers to a craft of embroidery decorated with precious materials such as pearl, coral, and glaze (glass).

Kesi (缂丝, Chinese silk tapestry): When weaving, it is necessary to constantly interrupt and change the color lines of the weft according to the growth pattern of flowers, birds, fish and insects and the changing posture of the lake and mountain scenery. Exquisite Kesi works pay attention to the change of lines and tonal harmony, both the three-dimensional sense of openwork carving and silk light and soft sense.

The decorative craft of Wanxiu

The Qing dynasty Wanxiu more with an inlay process to fix the fabric in the lower part of the sleeve, more with decorative processes used in conjunction.

Xiangtie (镶贴): A piece of Wanxiu fabric is sewn onto the cuffs and cut into the desired shape and size according to the decorative design, and a variety of embroidery techniques are used to obtain a beautiful pattern.

Gunbian (滚边): Wrap the edges of the garment and fabric, with long strips of cloth of uniform width.

Dibian (涤边): A lace woven with silk thread or a band sewn to secure it to the edge of the garment.

The theme of Wanxiu in the Qing Dynasty was rich in material and flexible in expression. With the prosperous development of marketplace culture and auspicious culture, the Wanxiu was chosen either to envision the perfect love between a talented man and a beautiful woman through such allusions as “Romance of the Western Chamber” and “Dream of the Red Chamber”; or to convey the ethical concept of right and wrong through such classic myths as “The Eight Immortals Crossing the Sea” and “The Legend of the White Snake”; or to glorify the inherent virtue and temperament of people by depicting flowers, birds, fish and insects with character characteristics; or to praise the tranquil attitude to life by depicting natural scenes of landscape, marketplace and courtyard life; or through the artifacts such as calligraphy and painting, they present their aesthetic interests. 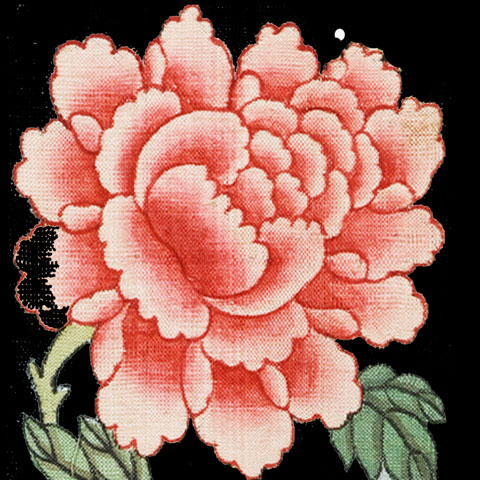 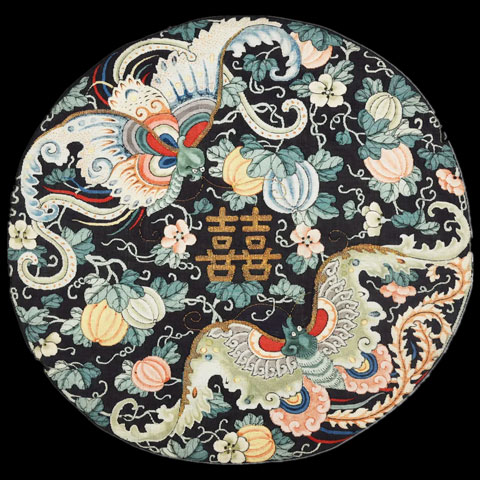 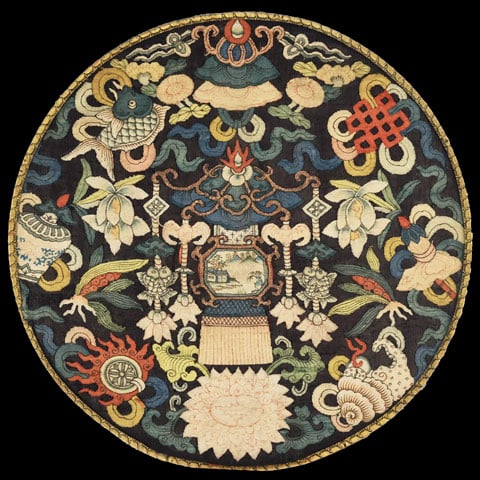 Embroidery is a great invention of the ancient Chinese working people. For thousands of years, high-grade silk fabrics were monopolized by the ruling class and were essential for daily use and mutual gifts, as well as being a comprehensive product of Chinese culture, aesthetics, skills, and craftsmanship. To this day, the craft of embroidery and the beautiful traditional cultural connotations it contains have been inherited and carried forward.

There is a special exhibition of Qing Dynasty Wanxiu at the Wuhan Museum in China from March 7 to April 7, 2021. If you are interested in Wanxiu, you can go to watch it and will have a better understanding of the Wanxiu.

Chinese embroidery patterns are an excellent traditional Chinese craft with a long history, while Hanfu is a traditional Chinese costume, the two have a lot of combination, and many Hanfu styles applies delicate embroidery patterns. History of Chinese Embroidery Patterns & Lucky Patterns Embroidery, known as needlework in ancient times, is one of the oldest Chinese handicrafts and has been around for over 2000 years. With the use of silk, the production and development of silk fabrics, embroidery has also gradually emerged, according to the "Shang Shu (尚书)" 4,000 years ago, the costume management system, it is stipulated that "the upper and lower garments are embroidered and painted". Chinese embroidery patterns reached its peak during the Ming and Qing dynasties, after being passed down for thousands of years. The techniques of folk embroidery and the materials used for silk embroidery both developed phenomenally. A large number of embroidery subjects in…