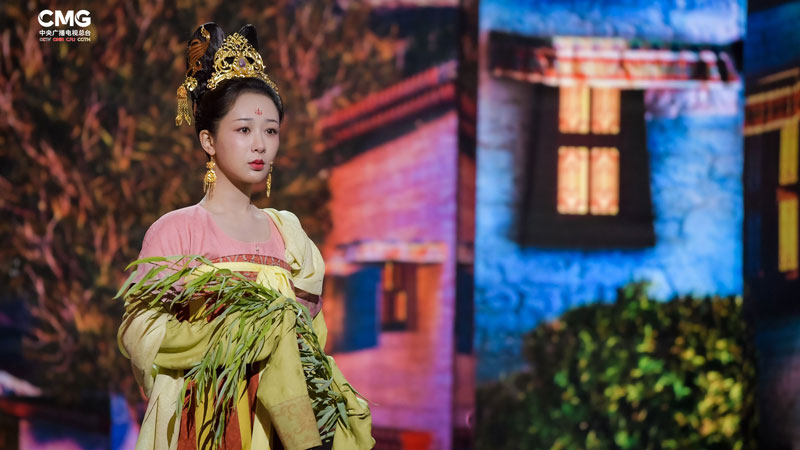 National Treasure (国家宝藏) can be said to be one of the must-see programs for lovers of traditional Chinese culture in recent years.

In the last three seasons, the program teamed up with museums around China to present a large number of Chinese treasures and relics for viewers, telling their past and present, bringing contemporary people closer to historical relics.

The Chinese traditional costumes - hanfu, that appear in the program are fully restored according to history, allowing viewers to appreciate the most authentic historical costumes of China.

Such as Princess Wencheng, played by Yang Zi in the third episode of the third season, telling the story of her past life and present life, which has attracted a lot of attention. 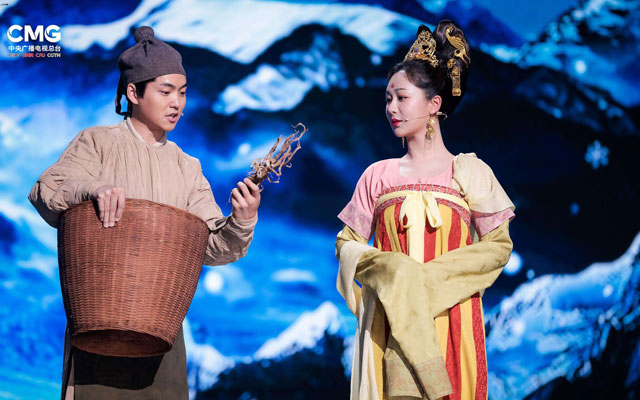 In addition, Yang Zi's Princess Wencheng styling broke the audience's inherent impression of Tang Dynasty costumes, and was even called the new template for cdrama costumes.

In fact, Yang Zi made such a stunning appearance, thanks to the program's restoration of history.

In the program, Yang Zi did not wear a Tibetan robe, but a red + gold Banbi high waist ruqun hanfu.

The first appearance, there are many viewers wondering, why Yang Zi since wearing hanfu, but not like the princess in the film and drama, wear large sleeves and long shirt?

This needs to return to historical authenticity.

The Tang Dynasty costumes in the film and dramas are mostly designed and created with the reference of "Court Ladies Adorning Their Hair With Flowers", which is mostly the life of noble women in the late Tang and Five Dynasties, far from the era the Princess Wencheng lived in. 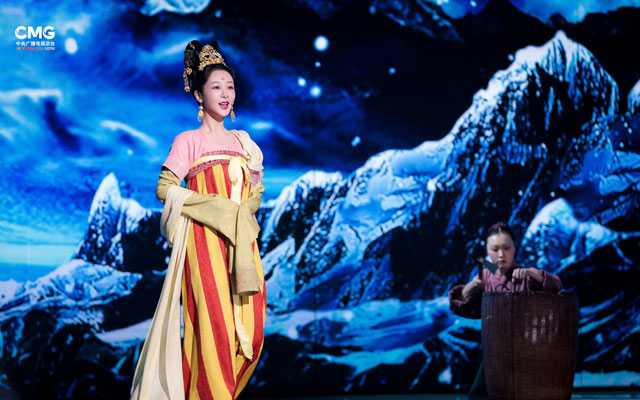 That's why we saw the Banbi high waist ruqun hanfu worn by Yang Zi in the program.

It is said that the prototype of this set of clothing is derived from the mural painting of the tomb of the Xincheng princess of Zhaoling, which is closer to the style of the early Tang Dynasty. 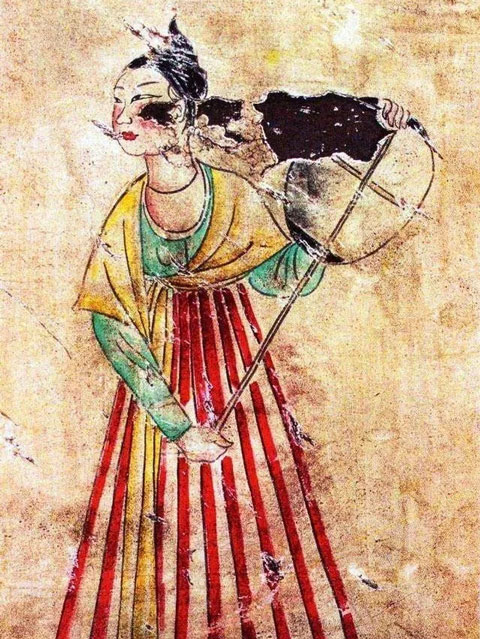 02 Details of the styling

Next, take a closer look at this styling of Yang Zi in the program.

The top of this look is a short Shan (衫) with round neck and narrow sleeves, Banbi (半臂) with Pibo (披帛), and the bottom is a high waist skirt. 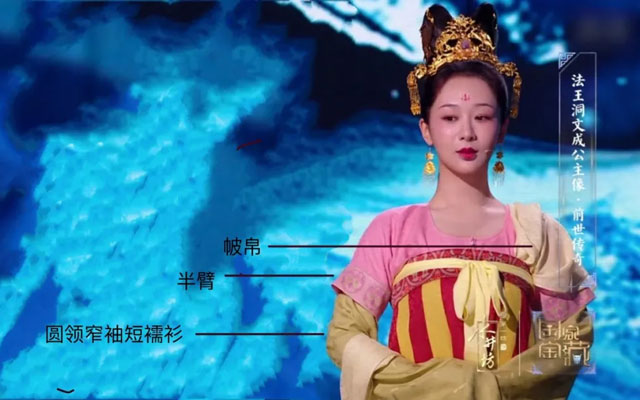 The narrow-sleeved Shan only started to change from wide sleeves to popularity after the Hu style entered the Central Plains during the Wei and Jin dynasties.

However, the changes of the Shan were not only in the length and width of the sleeves, but also in the collar, which had many rich forms, such as cross collar, round collar, and lapel.

The round collar Shan was the most popular among Tang Dynasty women when they matched their long skirts. 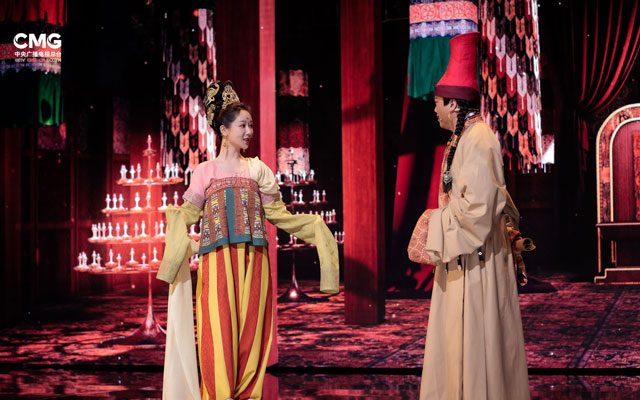 In the program, Yang Zi's outermost piece of clothing that is pink like short sleeves is called Banbi.

Banbi has appeared in the Han Dynasty, and only in the Sui Dynasty was it really popular within the court, and in the Tang Dynasty it went from the court to the people and became a common dress for women.

And the creamy white fluttering belt like a scarf on Yang Zi's left shoulder is Pibo. Although the Pibo was only matched in Tang Dynasty, it was essential in women's clothing.

Like the flying sky in the Dunhuang frescoes, the reason why there is a sense of spiritual fairy, a lot of credit is derived from Pibo.

In addition, there is another highlight in Yang Zi's look, which is the belt on the ruqun. 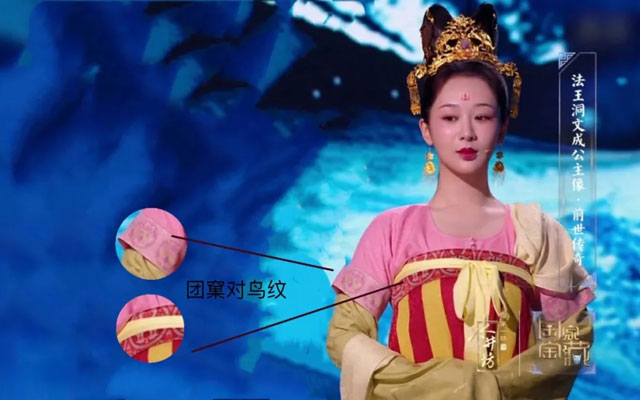 The belt pattern is typical of the Persian Sogdia style, which was very popular in the early Sui and Tang dynasties due to the prosperity of the Silk Road.

The red and yellow high waist skirt Yang Zi wearing is the Jianse Qun (间色裙, inter-color skirt), the most common dress for women in the early Tang Dynasty.

The long skirts of the Wei and Jin dynasties were all solid colors, but the vertical striped Jianse Qun became popular during the Sui dynasty. 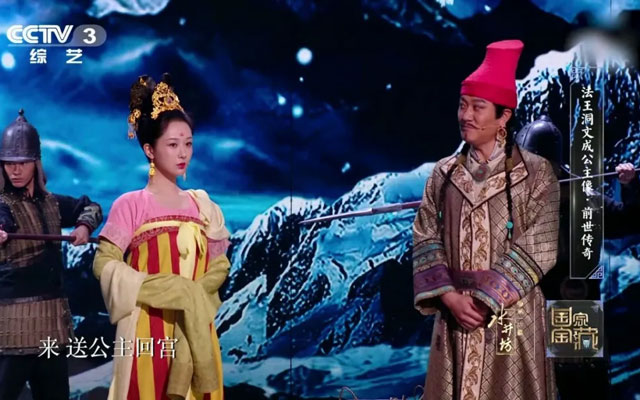 Women at that time felt that a solid-color skirt was too monotonous, so they tried to make the skirt look more colorful by splicing several different-color cloths together.

However, Tang women were definitely obsessed with red in their choice of skirt color.

No matter what kind of skirt they make, they like to match with red, like this kind of Jianse Qun, their favorite is "red + yellow", "red + green" two matching ways.

Princess Wencheng is one of the famous marriage alliance princesses in the history of Tang Dynasty.

During the reign of Emperor Taizong of the Tang Dynasty, Princess Wencheng spent more than a year traveling from Chang'an to Tufan (Tibetan Empire, modern Tibet region) to make peace for the sake of national justice.

And Princess Wencheng's distant marriage was of extraordinary significance to the economic and social development of Tufan at that time. 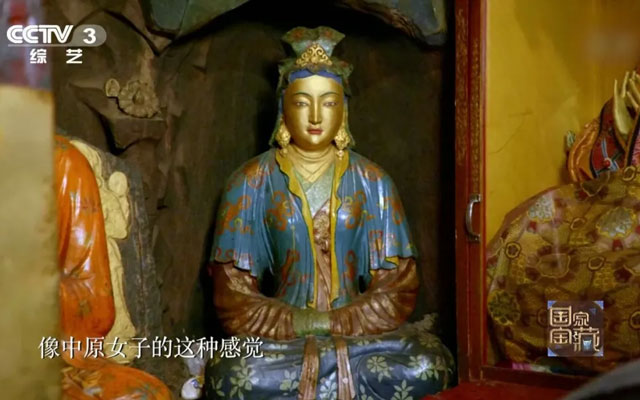 As portrayed by Yang Zi in "National Treasure", Princess Wencheng traveled far from her homeland at the age of 16, bringing not only medicine, advanced production techniques, and seeds from the Han region, but also teaching the Tufan people about weaving and paper making.

During her stay in Tufan, she was also very close to Songtsen Gampo, and even assisted him in establishing and consolidating the first unified regime dynasty in Tibetan history, laying out the construction of twelve monasteries.

Therefore, Princess Wencheng has always been quite respected by the Tufan people, and the statue in the Potala Palace's Dharma King Cave has been worshipped by the local people to this day.

The only regret is that Princess Wencheng herself, a girl who married far away, never returned to Chang'an from the age of 16 when she left her hometown. 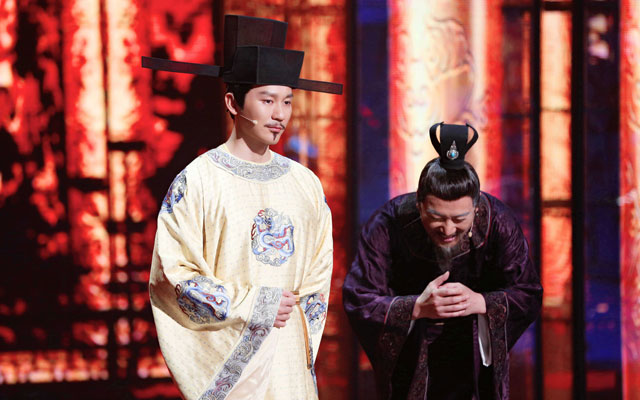 Creative License: The article is the author original, udner (CC BY-NC-SA 4.0) Copyright License. Share & Quote this post or content, please Add Link to this Post URL in your page. Respect the original work is the best support for the creator, thank you!
Documentary
Related 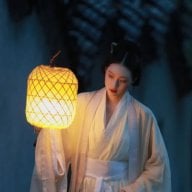