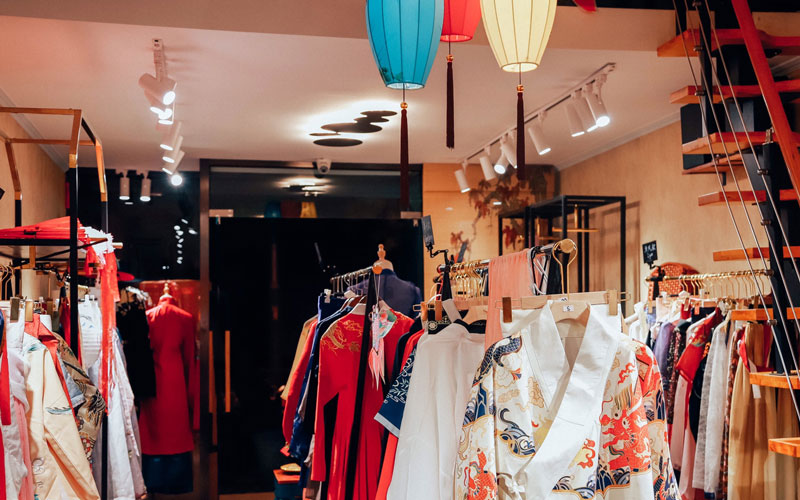 On the afternoon of Aug. 4, 2021, a group of post-95 and post-00 girls gathered at a Hanfu Experience Hall in Guangzhou to try Hanfu styling for the first time.

The room was decorated with landscape paintings on the wall, ink, and brush, and guzheng on the table, and the hanfu stylist was weaving twist braids for the experience participants, bending them into a circle and coiling them backwards, and then inserting a hairpin, and the shape of a Han Dynasty lady appeared in front of them, perfectly blending with the environment full of ancient style, highlighting the traditional, classical Chinese beauty. 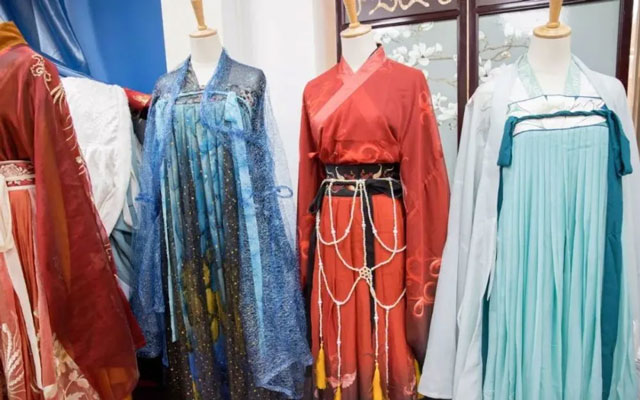 How did the hanfu styling experience become popular? How to bring this new fashion trend into the public's daily life?

Nandu Polling Center (南都民调中心) invited a number of hanfu stylists to share their experiences and conducted a questionnaire survey on hanfu lovers to gain a deeper understanding of the group's career status from multiple angles, and recently released the Hanfu Stylist Career Survey Report (2021). 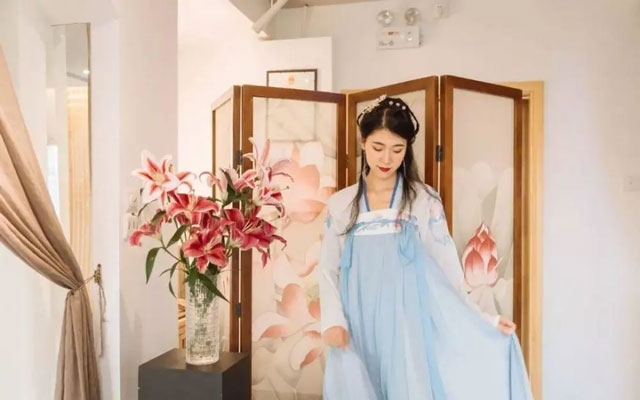 During the interview process, it was found that familiarity with the hanfu costumes and makeup of different dynasties is a basic skill that hanfu stylists must have, and their professionalism is valued by 60% of hanfu lovers. Over 70% of respondents feel that wearing hanfu is a heritage and a sense of belonging.

Hanfu stylists mainly bring hanfu culture to the public through two ways: on the one hand, by opening Hanfu Experience Hall to provide hanfu experiences such as hanfu dressing up, makeup, and hairstyling; on the other hand, by promoting hanfu culture to a bigger stage through hanfu courses, live events, fashion magazines, TV media, and other channels.

Do you know about hanfu stylists?

According to the results of the hanfu stylist career questionnaire launched by Nandu Poll Center to hanfu lovers, Hanfu Exhibition (66.40%), Hanfu Experience Hall (59.08%), and Hanfu Association (56.10%) are the main channels to learn about hanfu stylists. Among them, 61.42% of respondents have experienced a hanfu stylist to do their styling, while 34.08% said they have not experienced it but are interested in trying it.

Xiao Xu and Xiao Shang came to the Hanfu Experience Hall for the first time, and after they dressed up in hanfu, their respective hairstyles and outfits showed different temperaments: Xiao Xu changed to a "Dunhuang style lady", while Xiao Shang changed to a "martial arts heroine". 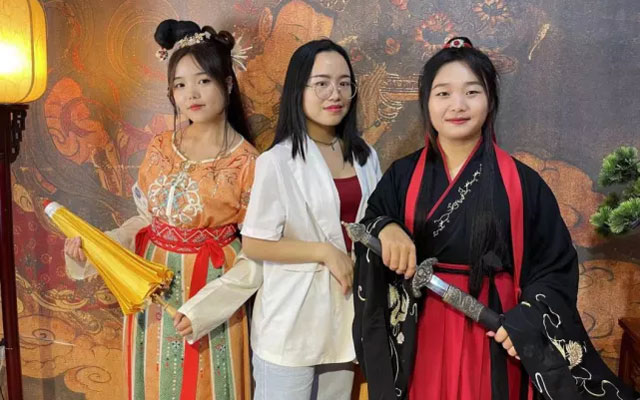 Both of these stylings was done by stylist Xiao Shi, a post-95 girl from Guizhou, who switched from education to hanfu styling and took over a Hanfu Experience Hall in June this year.

Xiao Shi said, guests generally need to make an appointment in advance. When guests arrive, they need to understand the styling style, such as Tang, Song, Ming and other dynasties clothing, gentle, noble, fairy, and other style types, stylists will be introduced while showing pictures, selected for dressing; next will be based on clothing style, personal face shape, eyebrows, eye shape and other qualities of makeup; and finally by the photographer to take pictures. This is a relatively complete hanfu experience.

But some guests don't want to experience all of them, the stylists will introduce different package combinations. For example, Xiao Xu and Xiao Shang experience the hanfu dressing and hair styling, and can take pictures themselves after the styling is done.

According to the results of the questionnaire, the three most popular services provided by hanfu stylists are costume introduction (72.71%), styling (65.38%) and dressing assistance (63.19%). 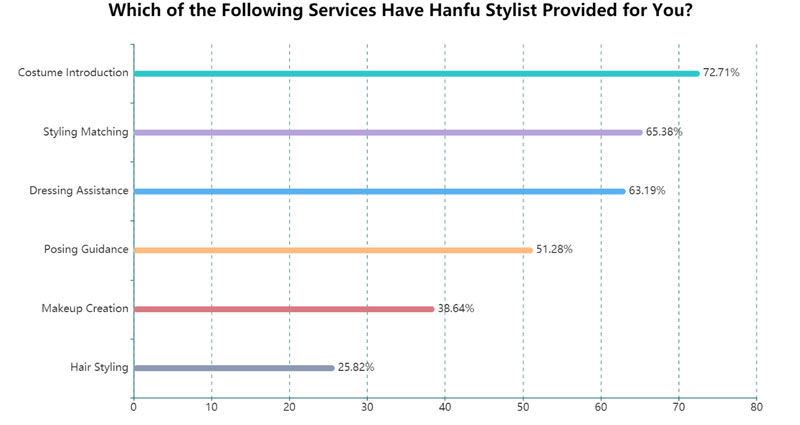 Researchers on-site observation for more than two hours found that Xiao Shi will often communicate with the guests to understand their needs. For example, when coiffure need to use a lot of hair clips to fix wigs and hair accessories, Xiao Shi will promptly ask the guests feel; sometimes hear the guests need assistance for hanfu dressing, she will run into the dressing room to help.

About the experience duration and atmosphere

Xiao Shi says that the busiest time is on weekends, winter and summer holidays, and that a lot of the guests are students. The normal experience time is usually limited to two hours; if there are not many guests booked, there is no time limit. 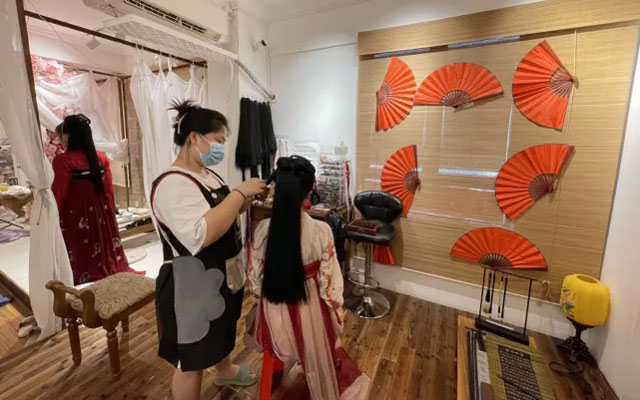 Respondents who have experienced a hanfu stylist styling for them said that within two hours is the most common length of service, accounting for 55.31%, followed by within one hour, accounting for 21.98%. The results of this questionnaire converged with the field interviews.

Field visits reveal that the scene, service content, and duration of the Hanfu Experience Hall are more or less the same, but what is more important is the service quality of the hanfu stylist and the sense of experience given to the guests.

Hanfu stylists will create a relaxing and comfortable atmosphere for the guests. Xiao Shi said, "I often chat with guests when doing makeup, like today, about their lives, hobbies. I also often tell guests to treat this place like their own home and call me if they need anything." She said that the guests in the store value the quality of service and scene more, and the price is rather secondary. 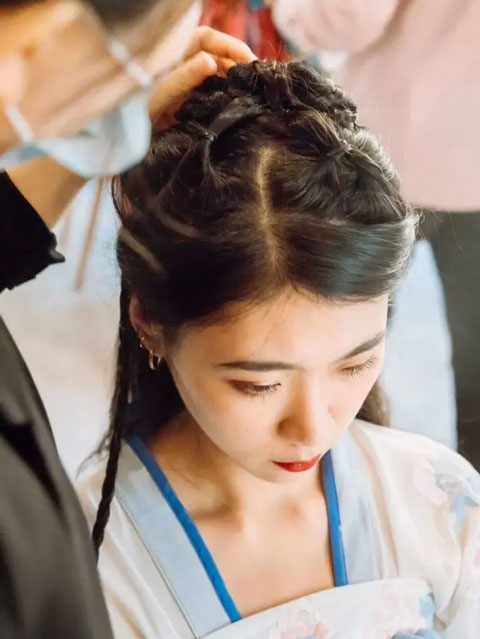 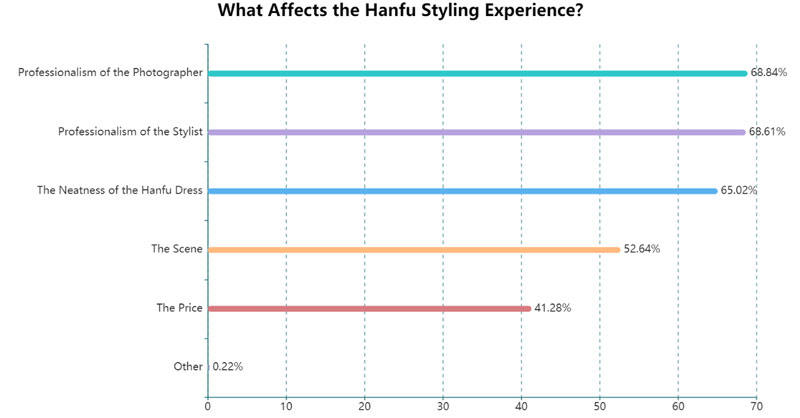 How do hanfu stylists ensure a quality service experience? It is essential to receive professional training. Xiao Shi and Nana, who have crossed over into the Hanfu industry, have attended professional makeup training to learn about the costumes and makeup of various dynasties.

The results of the questionnaire show that familiarity with Hanfu culture (70.08%), proficiency in professional skills such as hairstyle and makeup (63.10%), and the ability to create a personal and exclusive look according to the guest's appearance and temperament (61.98%) are the main abilities that respondents believe hanfu stylists should have. 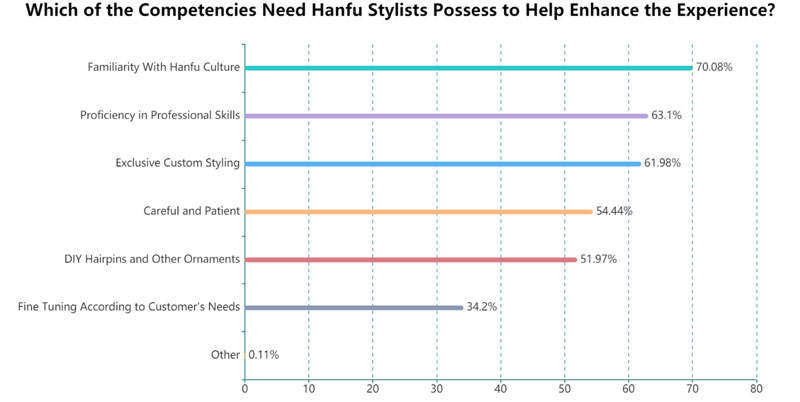 The researcher talked to several hanfu stylists and found that it is a basic skill to be familiar with the clothing and makeup characteristics of each dynasty.

Hanfu stylist Zeng Huiting mentioned that she would keep in communication with her guests when doing hanfu styling, so that they could pay attention to the details of hanfu wearing while experiencing it. 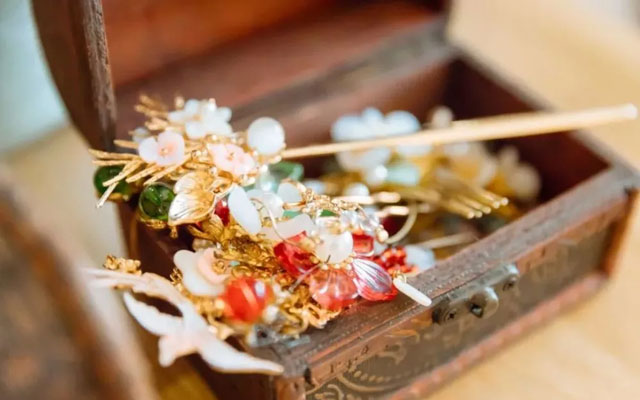 How much does the Hanfu experience cost? 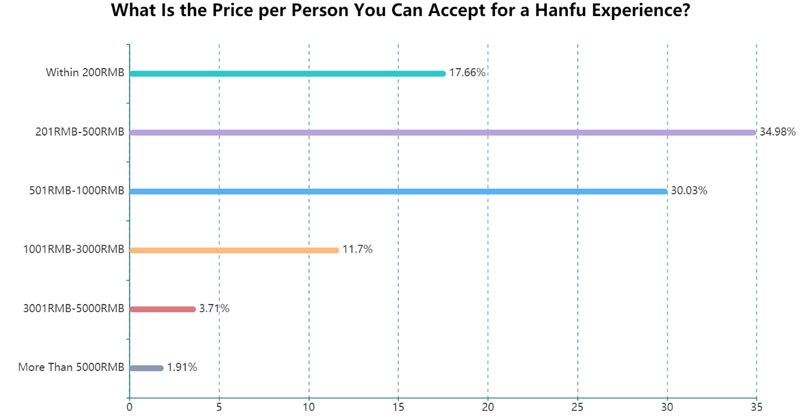 Hanfu stylist Zeng Huiting works for a Hanfu photography studio as the head of the makeup department, specializing in a variety of Hanfu makeup styles such as fairy, court. Unlike Hanfu Experience Hall, studios that provide Hanfu styling services focus more on the detailed creation of makeup and hairstyles, requiring more meticulous and professional abilities from stylists.

The promotion test for hanfu stylists is more stringent. Zeng Huiting mentioned that starting as a makeup assistant, there is a master to take with you, and you are required to learn at least two sets of styling each week. To be promoted to makeup artist, makeup assistants need to pass three levels of makeup making the technical assessment, and then 50 different sets of makeup and 50 different sets of styling, including modern and hanfu, all of which can be passed before they can officially become makeup artists. 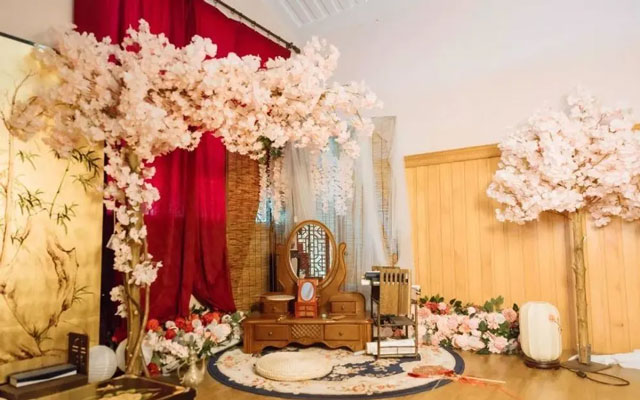 The promotion test for hanfu stylists is more stringent. Zeng Huiting mentioned that starting as a makeup assistant, there is a master to teach you, and you are required to learn at least two sets of styling per week. To be promoted to makeup artist, makeup assistants need to pass three levels of makeup making the technical assessment, and then 50 different sets of makeup and 50 different sets of styling, including modern hanfu and traditional hanfu, all of which can be passed before they can officially become makeup artists.

Presenting the beauty of Hanfu with modern elements

It is the common wish of all the hanfu stylists interviewed to promote Chinese costume culture and inherit Chinese beauty.

How to promote the heritage of hanfu culture? As the founder of Nalan Meiyu and a national-level beautician, Ms. Xu Xiangzhen, post-70, has focused on promoting traditional Chinese classical makeup styling for more than 10 years, and has developed courses on historical dynasty styling and ancient costume character styling together with her team. 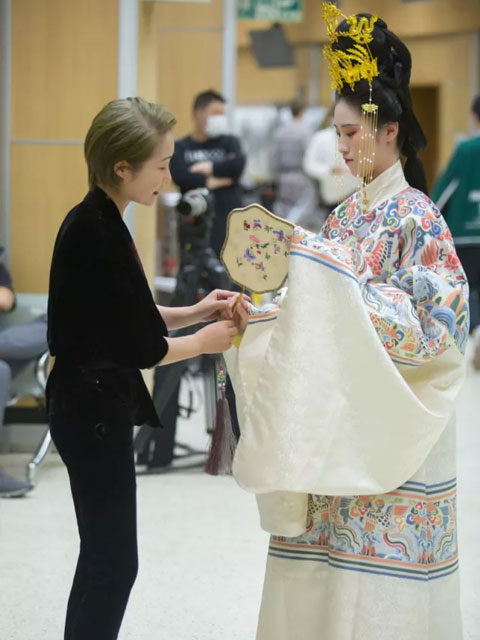 For example, the recognition and modification of face, eyebrow, eye and lip shape, blush painting, etc., as well as character styling. Ms. Xu said, "It's important to capture temperament to optimize and beautify! There is a learning curve to what kind of styling and makeup a set of hanfu can do to look good."

The different identities and character personalities, with hairstyles, hair accessories, clothing, and makeup each have their own preoccupations, hanfu stylists can make the characters show their personalities.

Ms. Xu found that in recent years, the group of students has become more and more widespread, initially most of them were Hanfu "Tongpao" (i.e. people who wear hanfu together), and now many Hanfu brands, Hanfu studios come to learn. 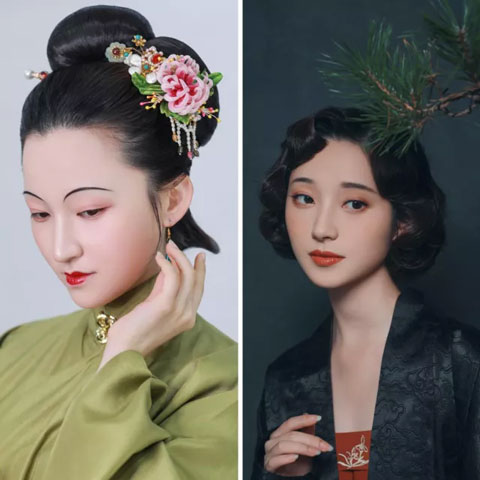 As the popularity of hanfu grows, it is especially important to preserve the core elements of hanfu while integrating and developing it. Ms. Xu believes that the Chinese aesthetic of gentle, introverted, and subtle temperament will not disappear in the development of hanfu. Both to retain the essence of things, but also to adapt to the trend development."

What is the meaning of wearing hanfu?

Ms. Li Yunzhi, a post-80 teacher, has been designing hanfu for more than 10 years and has witnessed the development and changes of hanfu. She started to contact hanfu in 2006, at that time, if you wanted to buy a hanfu, you either had to get it from one of the few hanfu stores in the country or make it yourself. 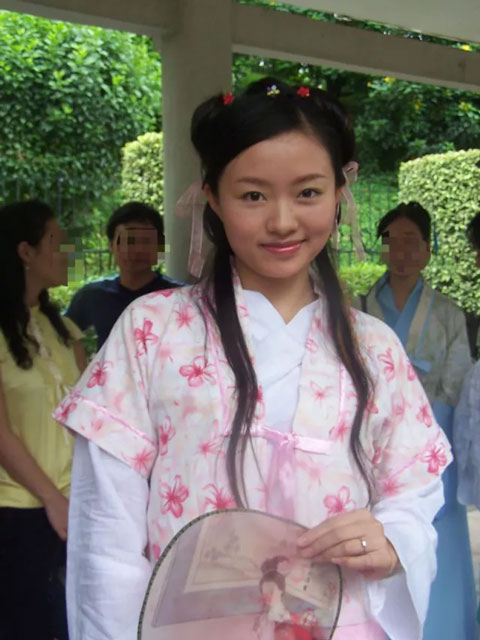 In 2007, Li Yunzhi wore a DIY hanfu to a mid-autumn festival garden tour

She observed hanfu forums for a whole year until she found a hanfu association in her city. She said while opening a photo of herself at the Mid-Autumn Festival Parade in 2007. The hanfu she wore was homemade, and her hair and clothing were not as elaborate and gorgeous as they are now, but the photo could not erase the youthful, elegant charm of the hanfu she wore back then.

"Nowadays, young people like the fairy-like hanfu style, the most important thing is to take photos, while the middle-aged group is more interested in the material used. Women have always been the mainstream group of hanfu, customized in a variety of styles and colors, mainly in quantity. " Ms. Li said. 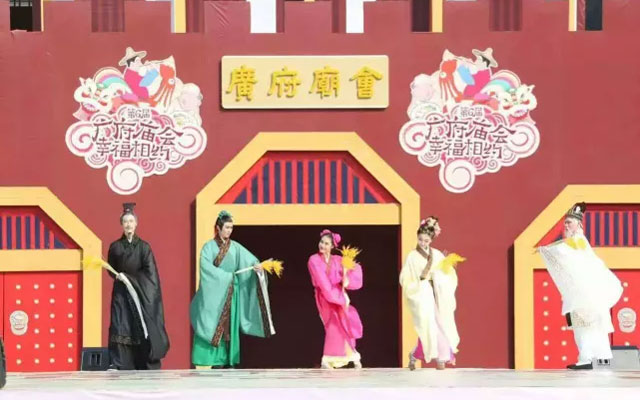 "However, in the past two years, there are more and more men who like hanfu. they do not need new models every day, and more importantly, they look at the wearing purpose of hanfu, such as custom sports hanfu." She insists on one-to-one customization, saying, "Individual needs and temperament are different, so even if you use the same piece of fabric, the result will be different.

Like other hanfu stylists, Ms. Li brings hanfu culture to a wider public. She presents a combination of Chinese hanfu costume styling and local culture.

In general, hanfu has developed from a niche hobby in the past to China-Chic now, without the promotion, inheritance, and innovation of this group of hanfu stylists. Whether it is Xiao Shi and Nana who have switched to hanfu styling, or Zeng Huiting, Xu Xiangzhen, and Li Yunzhi who have been persisting, promoting the beauty of China and Chinese hanfu costume culture to more people is the belief they keep.