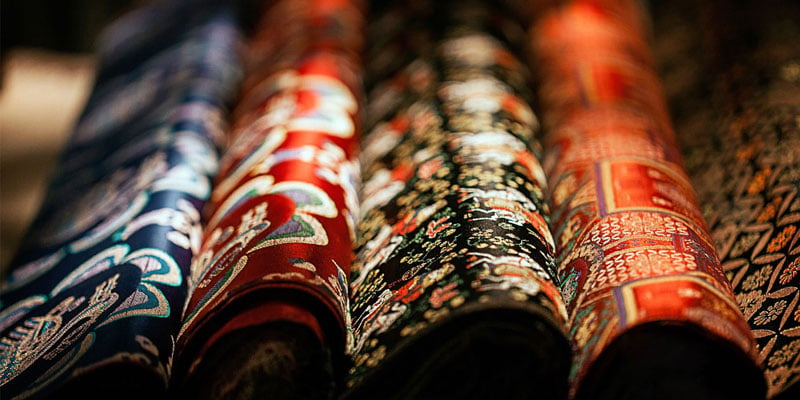 Sericulture and the spinning and weaving of silk originated in China thousands of years ago. Because of its rich colors and patterns, silk played an important role in ancient solemnities and ceremonies and also gave rise to a rich folkloric tradition.

The History of Silk

As archaeological findings show, China was the first country to develop sericulture and silk spinning and weaving.

In 1977, at Hemudu (河姆渡), a 7,000-year-old archaeological site in the city of Yuyao (余姚) in Zhejiang Province (浙江), a silkworm-shaped carving was found that represents a testament to the early engagement of China's ancient people in sericulture-related activities. 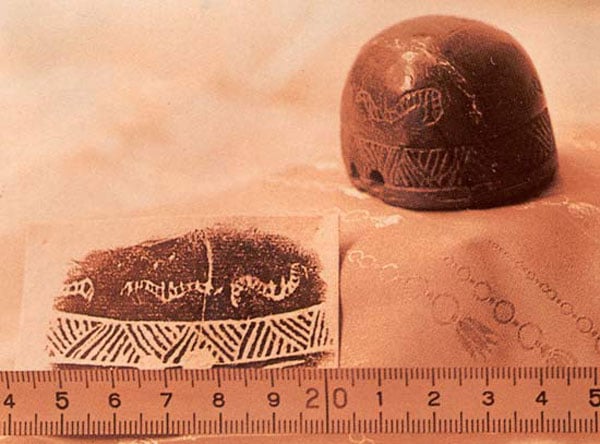 Among the inscriptions on bones and turtle shells discovered in the ruins of Yin (殷墟), capital of Shang dynasty (商, ca. 1600-1046 BC), there are numerous references to silkworms, the Morus alba or mulberry tree and silk.

This reinforces the thesis that silkworm rearing and silk weaving were already an important part of the lives of the people of that time.

Until reaching the years of the Warring Kingdoms (战国时代, 475-221 B.C.) the development in China of the now well-known Jacquard comotelar, the various silk fabrics, a fine and resistant silk, silk gauzes, brocade, silk twill, damask and other types of fabrics was long-lasting and fruitful.

In the Tang and Song dynasties (唐宋, 618-907 and 960-1279 respectively), embroidery made on looms with silks and gold thread, fabric printing and dyeing, as well as other crafts derived from silk reached a certain maturity.

The appearance of brocade in particular represented a milestone in the history of silk handicrafts in China. To this day the so-called three great brocades of the world: the Sichuan (蜀锦, shǔjǐn), Song (宋锦, sòngjǐn) and cloud (云锦, yúnjǐn) still represent their highest expression worldwide. 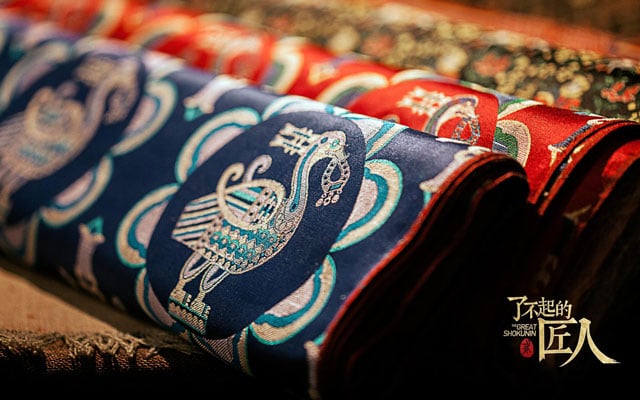 Because of its rich colors and patterns, silk played an important role in ancient solemnities and ceremonies and also originated a rich folk tradition. The Book of Rites (礼记) states that only members of the royal family may wear silk.

The earliest references to this issue in The Classic of History (尚书) are those contained in the "twelve indications," which set forth the twelve types of decorations and patterns established for the emperor and his ministers in order to show their ranks and dignities. 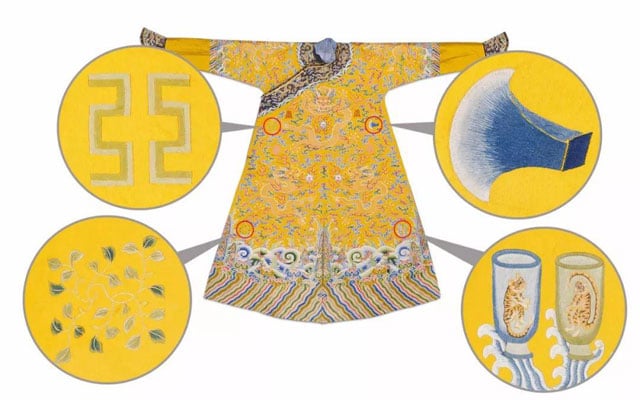 Among them, the emperor's silk headdress included the following motifs: the sun, the moon, the stars and constellations, the mountains, the figure of the dragon, and other twelve types of images that were also combined in different colors, each corresponding to the emperor's own virtue.

This tradition was passed down through the Qing dynasty (清, 1644-1911) and became an important part of the palace culture. The custom of offering sacrifices to the "silkworm deity" (蚕神, cánshén) likewise became a legacy.

The Legend About Silk

This saying exemplifies how, through the prescriptive imperial dress code, it was believed to confer the nation with due propriety and ceremony, by thus carrying out the regular government of the country.

The Yellow Emperor's chief concubine, Lei Zu (嫘祖), was the first to teach the people how to raise the silkworm, reel it from its cocoons, and make garments from such fabric, for which reason she has passed down to later generations as the divine image of the "Mother of Silkworms."

The custom of officiating sacrifices in her honor became one of the most important palace and popular rites in ancient China.

Today, in the intact imperial garden of the Qing dynasty, corresponding to the northeast corner of Beihai Park in Beijing, there still exists the so-called "Altar to the Silkworm Goddess," (先蚕坛, Xiāncántán) of red walls and green tiles, solemn and majestic. 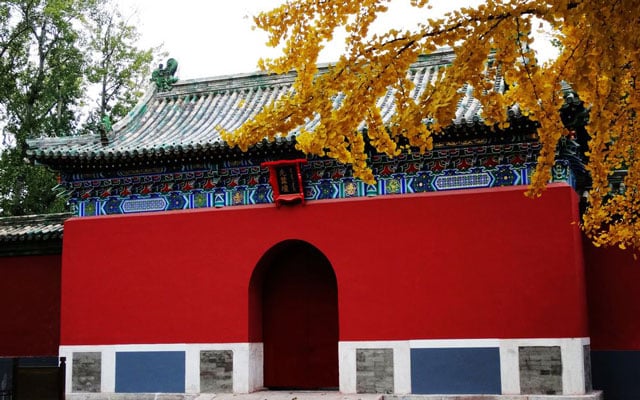 There, the imperial concubines of the Ming and Qing dynasties once officiated numerous solemn sacrificial rites, gathered mulberry, and bred worms in order to bless the nation for an ever fruitful and prosperous activity.

Among the people, meanwhile, the legend of the "young girl with a horse's head" (马头娘, Mǎtóuniáng) was widely spread.

The legendary horse, immaculate white and snow-like, endured countless vicissitudes and dangers to help the silkworm girl find her beloved father, who had been forcibly enlisted and whom she rescued from the battlefield.

The girl's father not only showed no thanks but killed the horse to nullify the marriage promise his daughter had made to the horse.

As a result, the animal's skin was transformed into a cool breeze that enveloped the young girl, and thus emerged the "silkworm deity," characterized with the head of a horse and the body of a worm.

Similar stories appear repeatedly in the works Testimonies in Search of the Supernatural (搜神记), Extensive Records of the Taiping Era (太平广记) and other ancient compilations on fantastic events.

The relationship between silk and Chinese literature is inevitable and very close.

The question of silkworm breeding and the cultivation of mulberry as an industry became a recurring theme for many men of letters of successive dynasties in China. 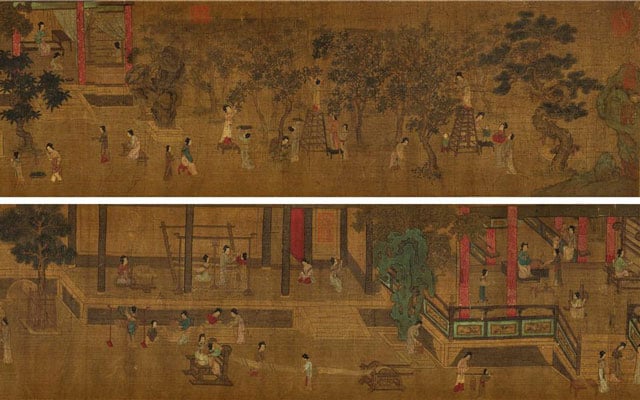 In the Shijing (诗经), the oldest known poetic anthology, a total of 39 poems deal, among other matters relating to silkworm production, with the various types of mulberry, their harvesting, the rearing of the worm and the processes of spinning, reeling and weaving.

Particularly moving is the figure of the young mulberry gatherers, industrious, beautiful, intelligent and honest.

Their affectionate and romantic devotion has been amply recorded in the verses of the Shijing and allows us, more than three thousand years later, to relive that touching feeling, charged with a persistent melancholy.

In the field of art, the Scenes of Field Labor and Weaving (耕织图) by Lou Shu (楼璹, 1090-1172), a magistrate in the early years of the Southern Song dynasty (南宋) gained fame as "the scroll painting that provided the earliest complete testimony in China to the traditional life pattern of field labor for men and weaving for women." 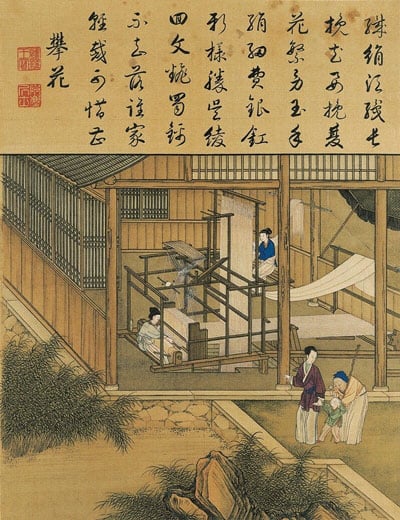 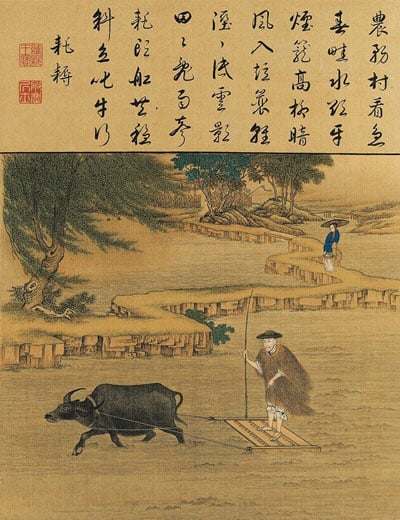 The artist thoroughly researched the fields and their labors and, applying a monochromatic ink drawing technique, created detailed panoramic scenes depicting a comprehensive portrait of the world of silkworms, mulberry trees, and silk weaving.

Once completed, the paintings were passed on to the Song dynasty palace and enjoyed the appreciation and praise of successive emperors, as their motifs were frequently used on silk clothing.

Later all kinds of official and popular copies emerged and spread throughout China to the history of art, science and technology, agriculture, and handicrafts in unique expressions.

Prior to the popularization of paper as a medium of expression, a type of thin, tough silk and silk twill represented the material of books and paintings. The vast majority of paintings before the Song dynasty were done on silk.

An example is the painting of The Imperial Maidens Adorning Their Hair with Flowers (簪花仕女图), from the Tang dynasty and whose popularity has survived to the present day, which was painted on a colorful silk scroll.

It was a July day in the year 1405 corresponding to the third in the power of Emperor Yongle(永乐). On the estuary of the Yangtze River, numerous flags were flying, covering the sky as a large and powerful fleet, consisting of more than 240 ships and a total crew of 27,400 men, sailed into the vast sea of misty waters whose horizon stretched as far as the eye could see.

In addition to porcelain and tea, the cargo of these ships consisted of silk, a commodity esteemed by Westerners as a product of incomparable value.

This is the description, recorded for posterity in the annals of history, of the expeditions to the western Pacific Ocean by Zheng He (郑和, 1371-1433), the famous admiral and explorer of the early Ming dynasty (明, 1368-1644). 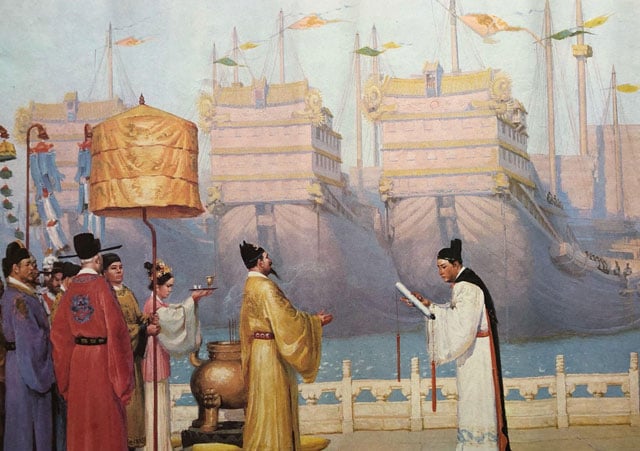 It was from this moment that the Maritime Silk Road, an exchange route between China and the Western world, was opened and the era of great navigations in human history began.

Through the trade of this highly valuable thread, extensive, active, and long-lasting economic exchange was established between China and other countries in ancient times.

Early in the 5th century BC, China was already known in classical Greece by the beautiful name of "Seres", a word meaning "land from which silk comes" or "country of silk production".

It is said that in order to end Persian control over the Silk Road, the Byzantine Emperor Justinian I (527-565) sent emissaries to hide the larvae of silkworms in their staff and bring them to Rome.

However, according to historical records, it was around the 3rd century that the silkworm and silk weaving industry began to develop, both in Byzantium and in other Western European countries.