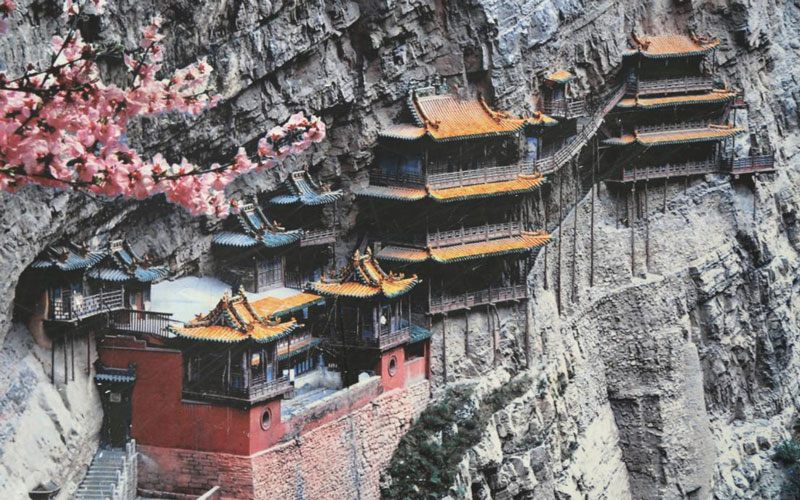 China has been a multi-regional country since ancient times. In many parts of the world, people always associate the Chinese territory with Confucius. This sage is almost representative of Chinese culture. In fact, Confucianism is a philosophy that was never intended to be a religion, although, eventually, that is how it spread and had a great impact on Chinese culture with its doctrines. In a sense, Chinese life is the product of Confucian culture.

Throughout the ages, many religions have entered China and, at present, there are five major faiths: Buddhism, Taoism, Islam, Catholicism, and Protestantism. All religions have added their own stamp to China's cultural history. According to recent research, China has more than 100 million followers of various religions. 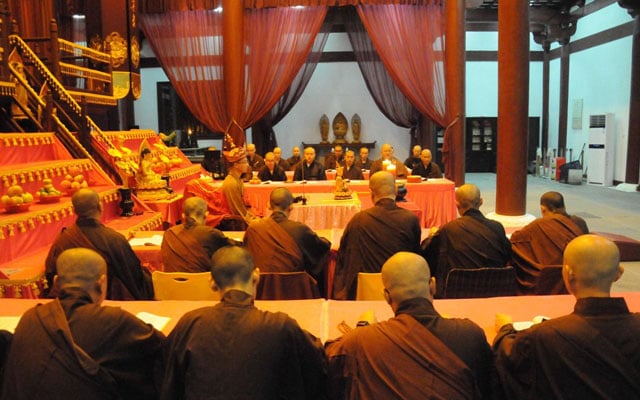 Chinese law guarantees religious freedom, although its application is relatively recent. Official statistics attribute Buddhism and Taoism as the majority religious influence on the population. On the other hand, there are 17 million Muslims, 4.5 million Protestants, and 3.5 million Catholics. Judaism was introduced in China through the caravans in the 15th century, but after several vicissitudes, it hardly has any presence.

Since ancient times. China has been a country of multiple ethnicities, with an infinity of religions. According to archaeological evidence, the ancestors of the Chinese first became religiously aware between 50,000 and 100,000 years ago. Bodies were found to be buried with their heads aligned in the excavation called ¨Upper Caveman¨ dug in a mountaintop grotto overlooking Zhoukoudian，on the outskirts of Beijing. The bodies were also buried with spindles, spikes (Las Hechas, and beautifully worked decorations.

There is hematite dust scattered around the bodies, a mineral that does not exist in this area and whose origin is a few hundred kilometers away. From archaeological evidence, it appears that cavemen attached great importance to burials and archaeologists conclude that cavemen believed in the concept of life iras death,  in other words, in the concept of the soul. These are the oldest evidence of religious beliefs found in China. 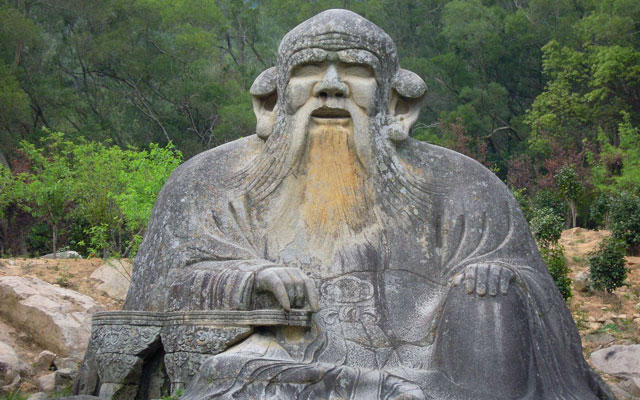 Early society was an agrarian culture that placed great importance on agricultural production and animal husbandry. Because agricultural societies are seriously affected by changes in nature, ancient humans worshipped and adored nature.

In this nature worship, preference was given to ¨paradise¨ over ¨earth¨, as well as to the hosts of paradise, such as mountains and rivers, wind，rain, and thunder; all natural phenomena that had a direct relationship with agricultural production. The cult also extended to all kinds of natural phenomena and objects. In archaeological excavations carried out in recent years, a large number of vessels painted with the hosts of the sky have been found. "God" as a word representing "heaven" has often been found in the remains of ancient books, showing that nature worship prevailed. The heroic deeds of ancient characters, often mixing battles with natural disasters, led people to worship their ancestors and ask them for protection. Ancestor and nature worship became a primitive form of religion for the ancient Chinese.

Ancestor worship reached its peak during the Shang dynasty, from 1384 to 1111 BC. The excavation of a significant number of bones and turtle shells with inscriptions is evidence. Shang society was very superstitious and often sought the advice of the gods on everything from memorial ceremonies to war or disease; the Shang prayed to their gods to guide their actions.

Such prediction rituals were strictly controlled by the state until the Zhou dynasty, which ruled from 1027 to 777 B.C. The duration, style, and scope of divination rituals were specified. The most important of these rituals were presided over by the emperor, but lower-ranking officials could only preside over inferior rituals. 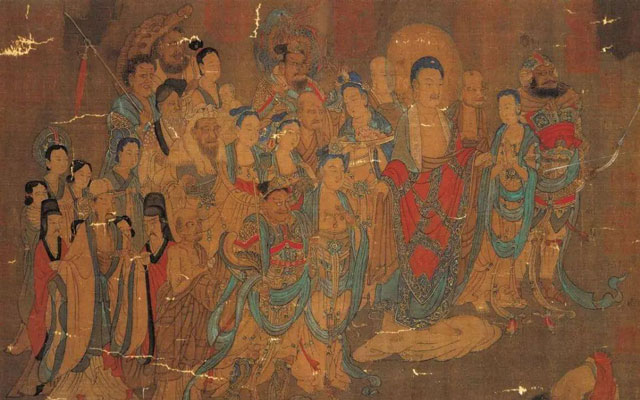 Buddhism is a foreign import, brought to China from India via the Silk Road by itinerant monks and missionaries from the 1st century A.D. It was the first organized religion to penetrate China and enjoyed a glorious, if brief, period of dominance under the Tang in the 8th century. Just as the Chinese have been able to accommodate the mutual contradictions between Confucianism and Taoism, so Buddhism did not eclipse other faiths, for as it took root, its principles were gradually integrated into the existing structure of thought, which in turn transformed its expression, adapting it to the Chinese mentality. 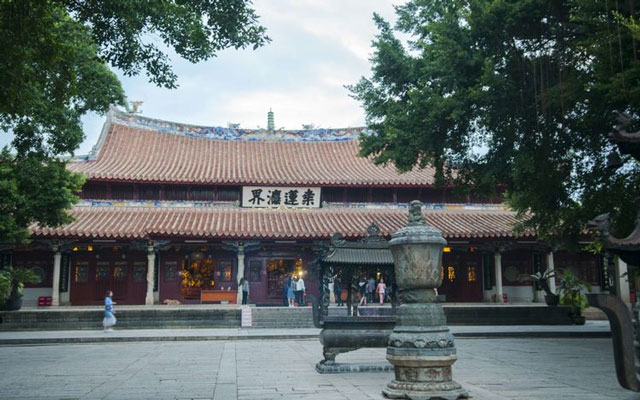 Today, China has more than 13,000 Buddhist temples with some 200,000 monks and nuns. Since there is no strict ceremony when one becomes a religious believer, it is difficult to obtain the exact number of Buddhists. According to statistics issued by China's national Buddhist organization, the Buddhist Association of China, the country has about 100 million Buddhists.

Confucianism occupies a place of the first rank among the philosophical movements of Chinese culture. Confucius (according to tradition, 551-479 B.C.) was a scholar and disseminator of the traditions of the past seen as a reference point for virtue and wisdom.

He spread a theory of government based on respect for the five fundamental personal relationships (ruler-subject, father-son, husband-wife, elder brother-little brother, friend-friend) and the virtues that should adorn the good man (righteousness, sense of justice, loyalty, altruism, humanity). In addition, he valued the culture and ceremonial rituals in which these personal relationships and virtues took shape. 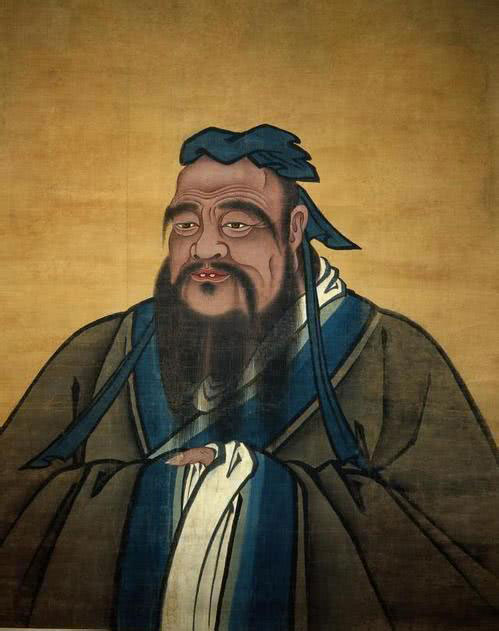 Confucian thought took hold from the Han period onwards until it became the guide of the empire; Confucius himself was deified. The Lunyu (Dialogues), written by his disciples, and the Chunqiu (Annals of Springs and Autumns), a chronicle of the principality of Lu, Confucius' homeland, are attributed to him.

Taoism emerged as a philosophical school opposed to Confucianism (4th-3rd centuries BC), invoking the return to nature as opposed to social bonds (culture and institutions). The fundamental precepts of this school are: to follow the Tao (the "Way"), that is, to adapt to nature without intervening on it, and "not to act" (Wu Wei), so as not to modify the natural course of things. Its fundamental texts are the Dao De Jing, attributed to Laozi, the legendary founder of the movement, the Zhuangzi, attributed to the thinker Zhuang Zhou (4th century B.C.), and the Liezi of Master Liezi (3rd century B.C.). 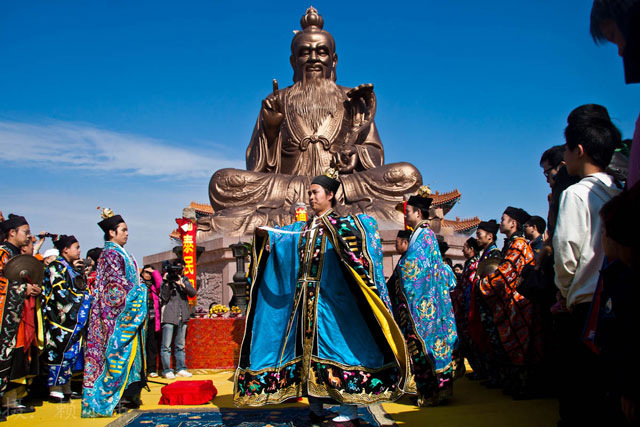 In a relatively quick time, Taoism became a religion with a varied pantheon headed by Laozi. Taoist speculations favored and developed magical and religious practices to increase vital potency, in addition to gymnastic, sexual, dietetic, respiratory, etc. practices. Taoist research in the field of natural sciences was fundamental for the development of science in ancient China.

Islam entered China peacefully through the Silk Road and gained a foothold in the regions of Xinjiang, Gansu, and Shaanxi, where the majority of Chinese Muslims are concentrated today. Its period of maximum diffusion coincided with the Chinese expansion into Central Asia, which brought it into contact with other Muslim peoples, especially in the Tang period. 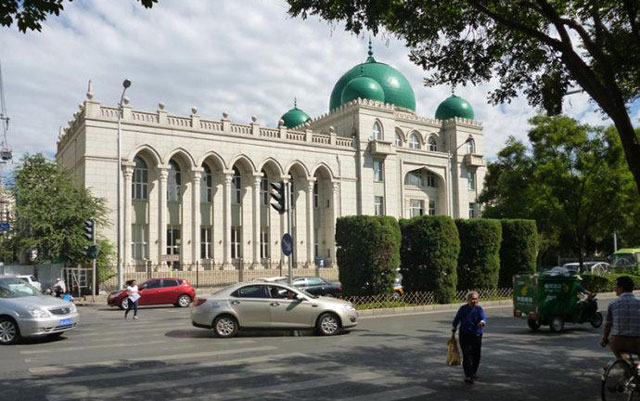 Christianity was introduced in China as Nestorianism in the vile century, according to the stele of Xi'an of the year 781 (exhibited in the museum of the city). In the 13th century, some European Franciscan missionaries visited the court of the Mongol emperors, although the most significant work was done by the Jesuits between the 16th and 17th centuries: they not only succeeded in gaining followers but also intervened in the scientific field (astronomy, geography, mathematics). Protestants were introduced in the 19th century, coinciding with the economic and military pressure of the Western colonial powers. 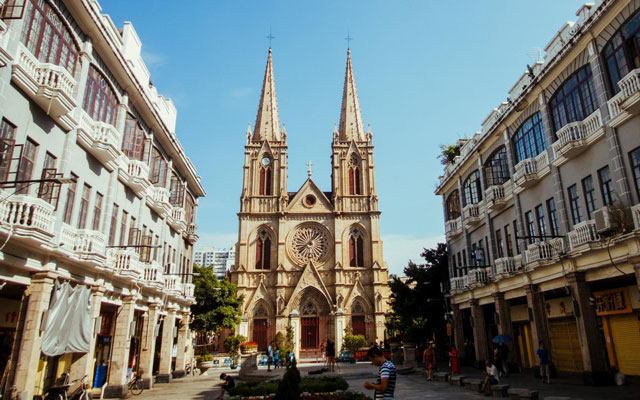