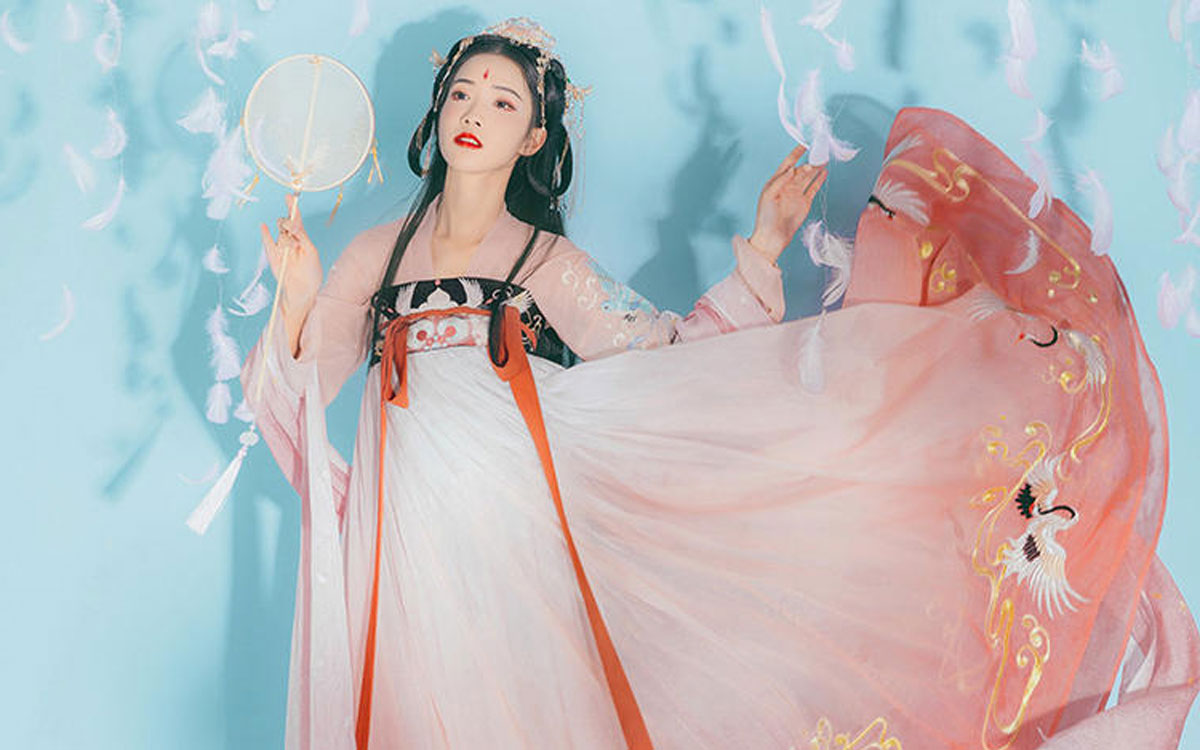 Latest Winter Hanfu Styles in 2022 View
A detailed descriptions of hanfu skirt's hem. There are different hem lengths to a hanfu skirt, you can follow these descriptions to choose the one suitable for you.

When it comes to hanfu, many beginners can only tell the difference between the dress by their physical characteristics and match them to the overall outfit from a particular dynasty. Besides that, when choosing hanfu, they will only pay attention to the hanfu skirt suitable to their height and that’s it. But, putting the styles and length of the skirt aside, there is also the hem’s length that can make the entire skirt of a hanfu look different when worn. The length of the hem will be the bottom horizontal edge of the skirt. The smaller the length is then the more restrictions the skirt will be able to spread and vice versa. Here we will be introducing a few of the hanfu hem’s lengths, phrases Chinese hanfu ethusiasts have for them, and their difference compared to each other when worn. 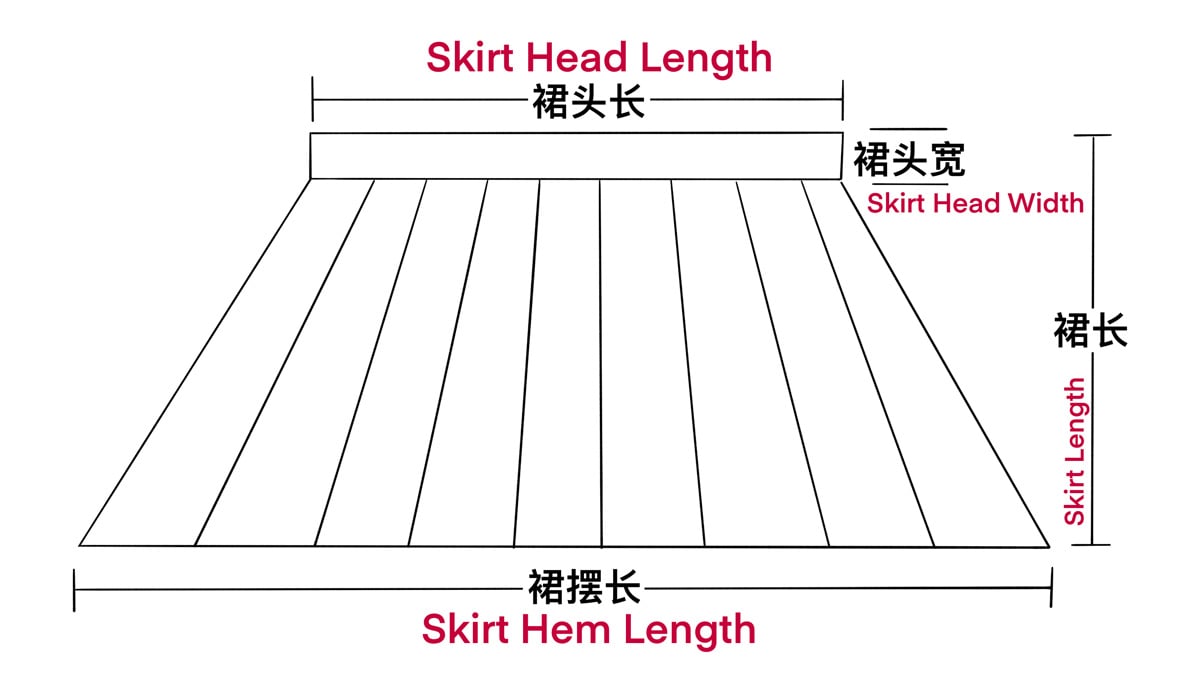 The first style will be a three-meter-long hem of a hanfu skirt.

For three-meter, there is a saying "三米成桶 (sān mǐ chéng tǒng)" roughly translates as "three meters turn to a barrel." 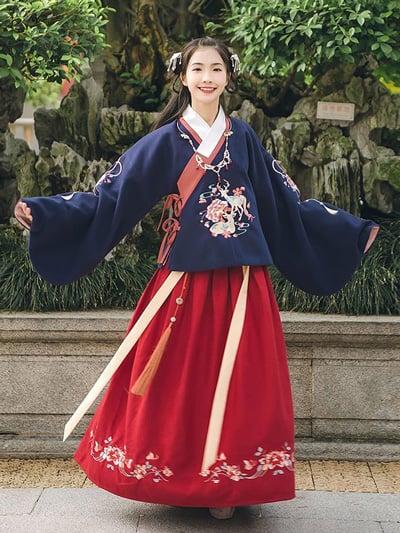 Three-meter long hanfu skirt is either made up of one layer or two layers of skirt. If it’s one layer, it’ll be an opaque color, if two, then the top layer will be semi-transparent and possibly with sewn or printed design on top.

The reason there is the saying “three meters turn to barrel” for a three-meter-long skirt is because of how it looks. When this type of skirt is worn with a hanfu top and twirls around in place, the inner lining of the skirt will be fluffed up by the air from the movements thus morphing the skirt into a barrel shape. The hem of the skirt will have restrictions on how big and far it can spread with the flow of the air around it, and the air that is already under the skirt’s lining will fluff up the areas above the hem, giving it a barrel-like look to it. 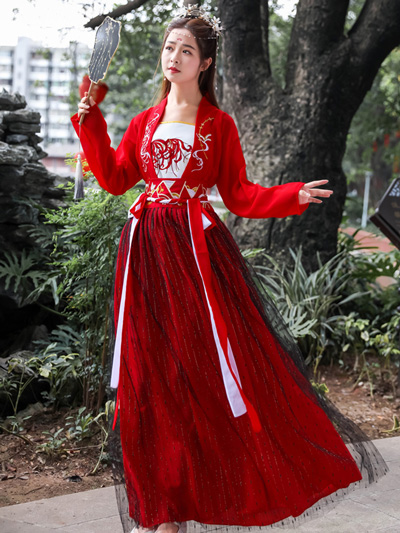 Unlike other lengths of the hanfu skirt, three meters used up far fewer materials when making it. Compared to regular dress, a hem that is three meters long is already considered big, but when compared to hanfu clothing, this is only considered regular length.

Nowadays, there might still be stores selling hanfu skirts with a hem of three meters, but it’s far less popular compared to other lengths. This is because many people don’t like the barrel look when twirling with these skirts. Other lengths can give the hem of their skirt more space to spread in the air, and won’t decrease the overall beauty when worn.

Then there is skirt with a hem length of six meters.

Six meters long is double the length of three meters and the folds of the skirt will also become narrower. Overall, a six-meter length for the hem will give the skirt an overall soft, beautiful look to it. And it is also made up of one or two layers. 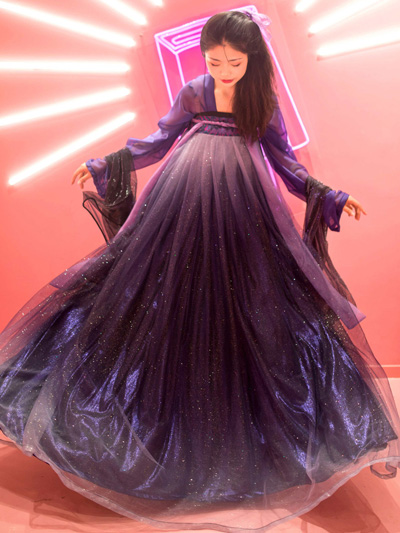 When turning in circles, the air will fluff up the inner lining of the skirt(s). And since the hem is longer there will be more space for the hem of the skirt to float around under the influence of the air around it.

The reason it got the “six-meter turn to flower” saying is due to the hem being able to spread out more than the three-meter one. When looking from afar, the colors of the dress and the width the hem is able to spread will give an illusion that the dress itself is flowers dancing in full bloom. 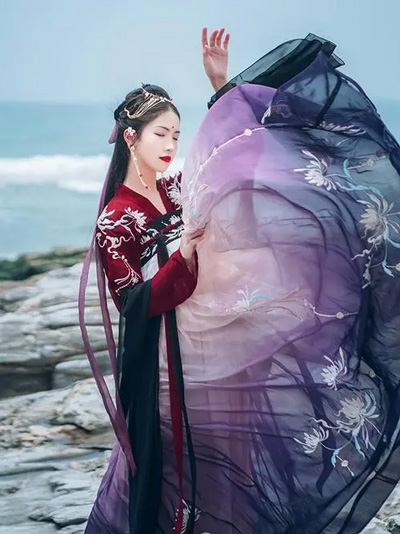 When compared to three meters one, you can already see the difference very clearly just by the spread and flow of the skirt with air and body movements.

This length of the skirt is the most preferred length by many people nowadays. Not only can you wear it out with friends and it won’t be causing you much inconvenience like skirts with longer lengths introduced later, but at the same time, it’s unlike three meters one where it will make you look like a barrel when twirling, especially for those who also care about the beauty of the dress.

Then there is nine-meter-long hem.

For nine meters there is a saying "九米成仙 (jiǔ mǐ chéng xiān)," meaning "nine meters turn to a fairy."

The overall look of the outfit when worn will look better than the six-meter one. The hem will be able to spread out and flow with the wind even more when twirling.

Nine meters long will give the impression that an immortal came down to earth with the long skirt of the hanfu flying around them. Especially when the hanfu skirt has many colors and designs on it - including the outer layer being semi-transparent textures. The outfit will flow with the movements smoothly, leaving a trail giving the illusion of an immortal that came down to earth.

Even when sitting down, the skirt will gather around you giving a stunning look and heavenly vibe as if you’re completely different from the people around you. 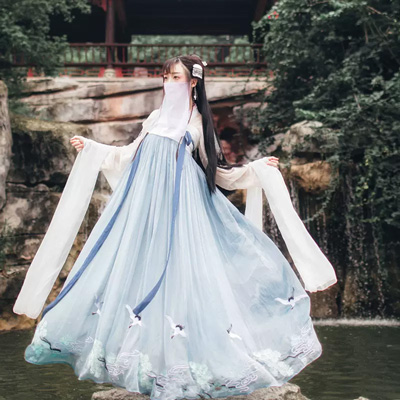 Nine and twelve meters long can be beautiful when worn, but for hanfu enthusiasts who like to wear hanfu on outings, it can be rather troublesome. There is a saying that “the more beautiful you wanna look in hanfu then the more weight you'll have to bear.” The longer the hem of the skirt is, the more materials it will use up, and with more materials used up to make, the weight of the clothing will increase. So if you want to wear hanfu comfortably, choosing between three and six meters will be perfect. Nine and twelve are not out of the options, it can just be pretty troublesome when worn. Those who’ve worn hanfu before may be able to understand the issue when it’s on a rainy day, or the hem of the hanfu is too long to be mopping the floor.

Nine and twelve can still be given a try if you're just putting them on for a photo shoot instead of traveling far with them or trying to do many tasks that you’ll usually do daily. 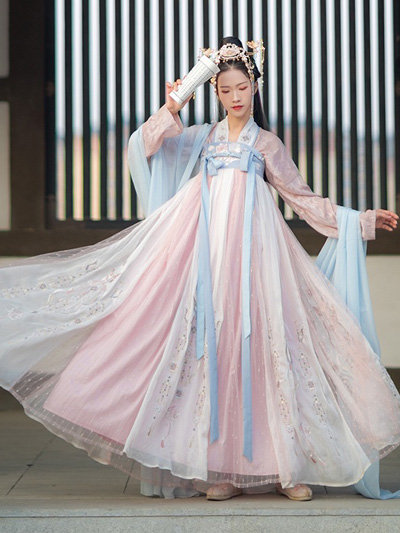 Lastly, there is a twelve-meter-long hem. Perhaps there is a longer length after twelve meters, but three to twelve meters length is the popularly known category of hanfu skirts.

For twelve meters there is the saying "十二米上天 (shí'èr mǐ shàngtiān)" or "十二米成神 (shí'èr mǐ chéng shén)." Translated as "twelve meters go to heaven" (not literally, but saying that you are beautiful enough to be one from heaven), or “twelve meters turn to god." Fairy (仙) and god (神) roughly can be considered the same thing if you only considered them with immortality and power. But at the same time they are also slightly different, especially when gods (神) are formed between heaven and earth to govern everything while fairy (仙), also known as immortals, are formed through cultivations. You can see fairy in many Chinese television shows, but these two are commonly used to express the same thing. 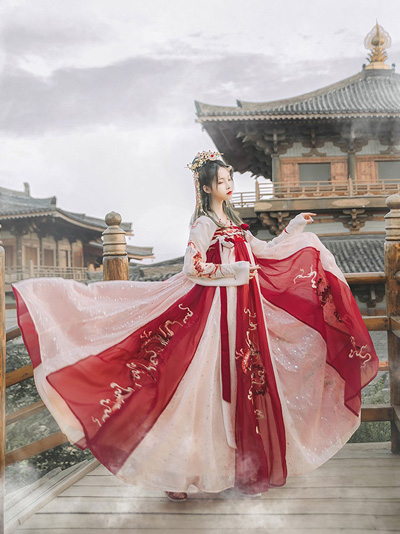 It was given this phrase because when twirling in this dress, the hem of the skirt will spread out a lot, giving it a complete circle if looked at from above. And this twirling alone influences the skirt’s flow and will give people the illusion that the person wearing it have beauty that is not supposed to come from earth, thus the assumption to be from heaven, a place where many Chinese people imagined to be full of beauty and things unimaginable.

Some people even exaggerated by saying that this length is a legend only heard of, because of the difficulty and a large amount of weight when wearing this hanfu. So to many, they only heard of the existence of this length but did not see it often let alone wear one themselves. 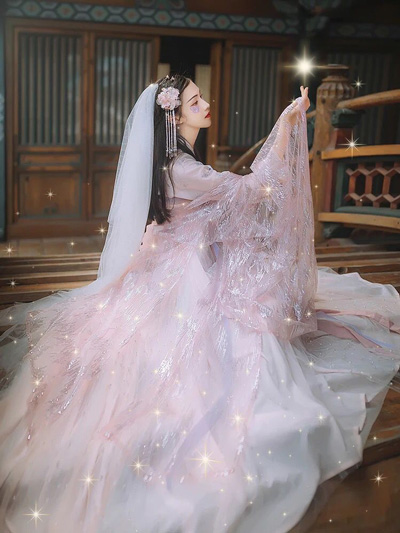 Besides these well-known lengths for the skirt’s hem, there are also less known lengths. People buy these to suit their needs or simply because they prefer this length. But it all depends on preferences.

With different hem lengths, there are also different ways to sway the dress so that it can present its full beauty of the dress.

A few of the existing hem’s length includes; 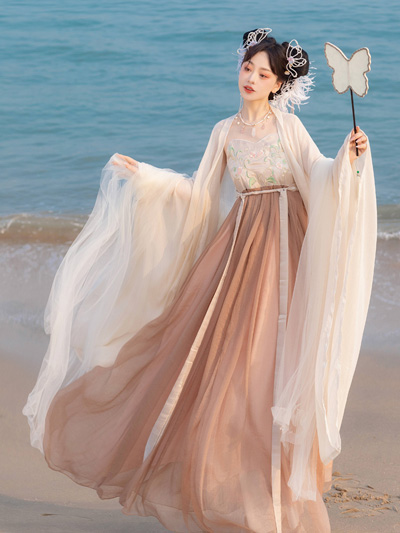 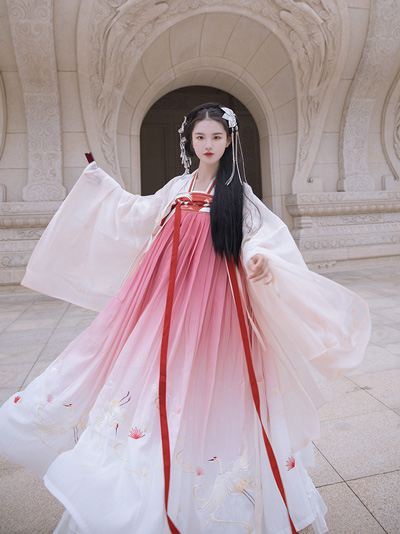 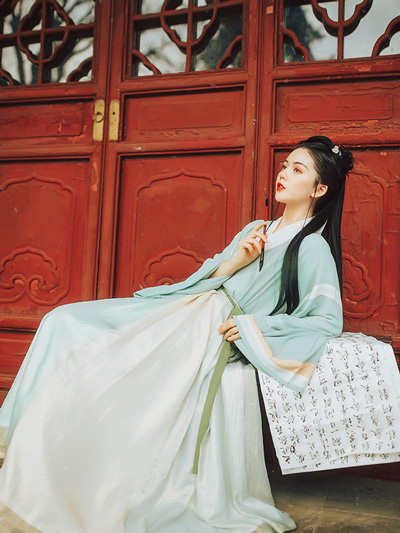 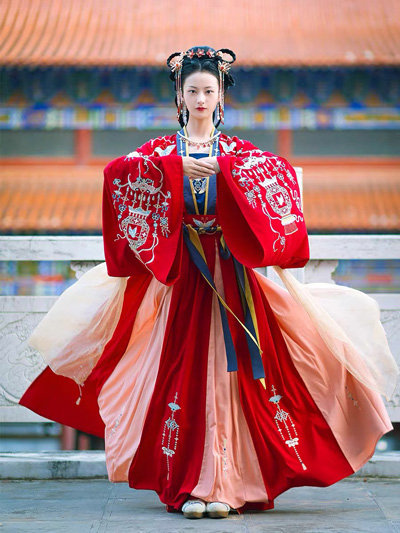 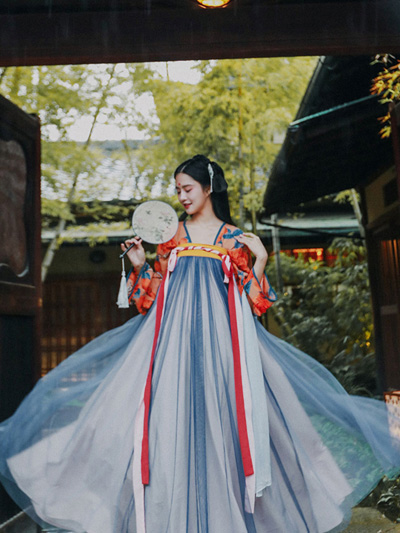 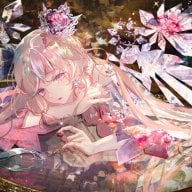