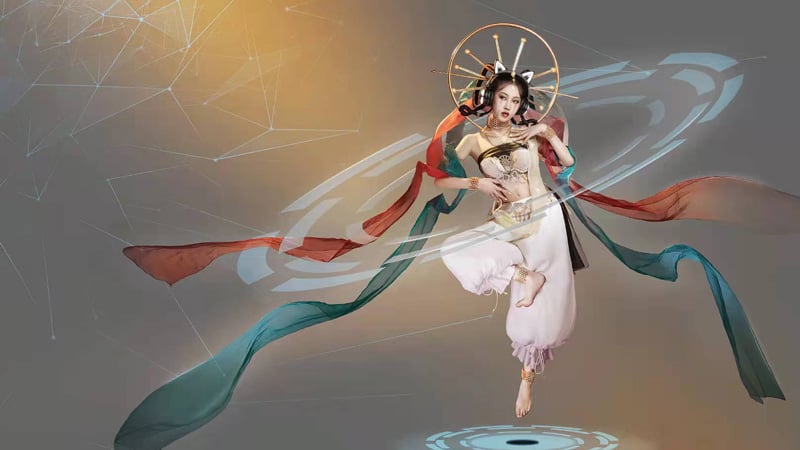 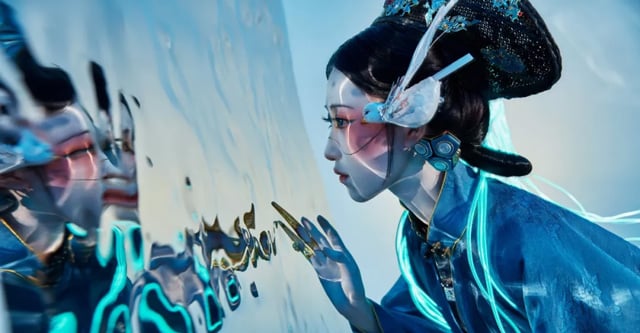 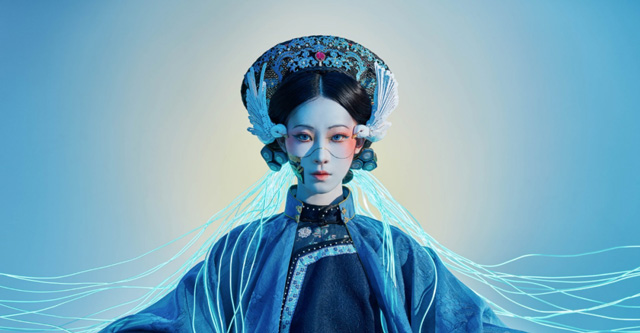 The inspiration for this set of photos came from a Qing Dynasty Qianlong porcelain now in the National Museum of China. It was made in Jingdezhen for Haiyan Hall in the Yuanmingyuan Park, and only one survives.

The whole artwork contains the meaning of "the sea is calm and the river is clear, and the country is peaceful", and is beautifully crafted and painted, symbolizing the peak of the Qianlong period porcelain! 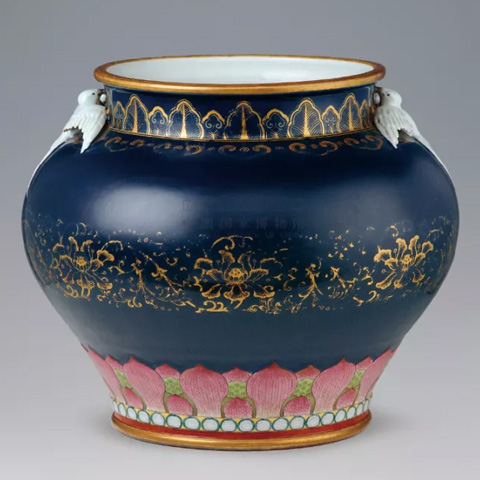 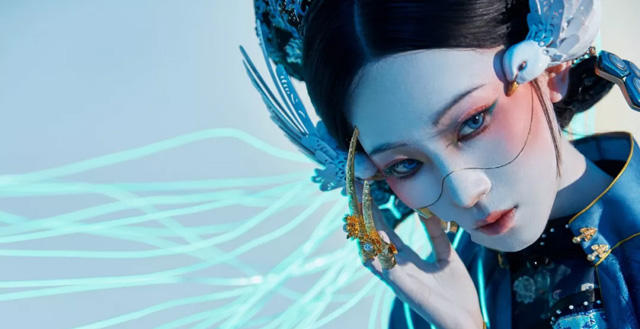 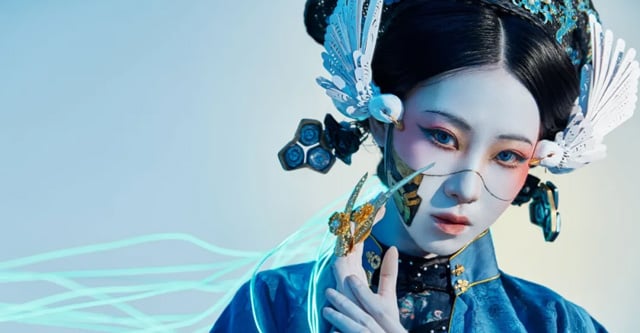 The focus is on some details of the face, the appearance of the two swallows decorated, the face of the painted lines are all exquisite and sharp, just a few strokes to highlight the taste of the future of technology!

Such a creative realization, the effect is really great! And this is not the only wonderful work of this treasure blogger, today we will introduce you to @Lao Ba (老八捌) and her fantastic creations!

The idea of combining traditional hanfu with technology and the future has been made into a whole series by her!

One was inspired by the lolita dress designed with the elements of the Tang Dynasty round neck robe. 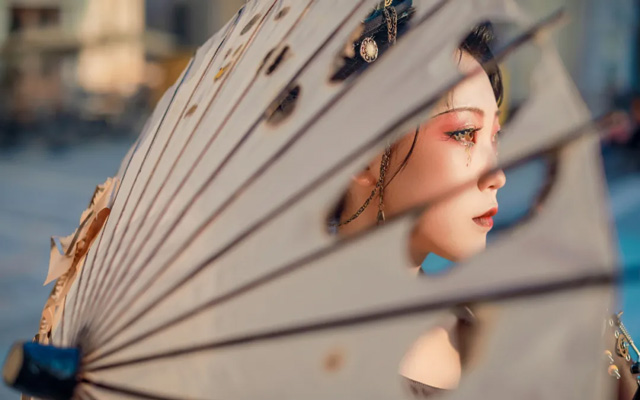 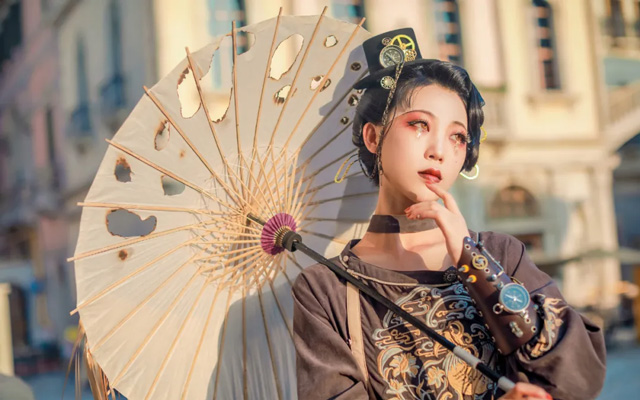 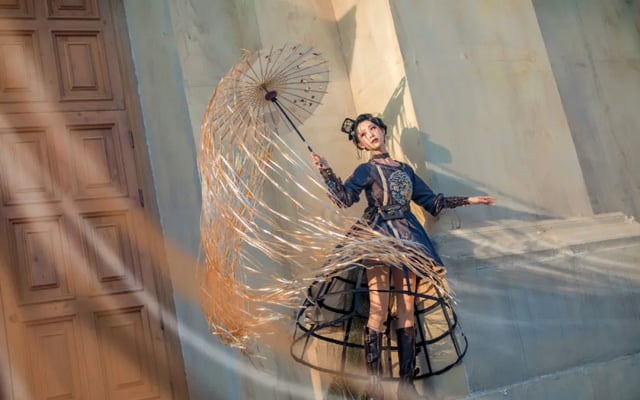 With the unique attributes of the punk cool girl, under some traditional elements, there are many small details of the steam era, such as the small gear patch under the eyes, clock elements, and so on.

Another creative makeup reference to the style of the early Tang Dynasty, this period of women's makeup to be subtle and gentle, usually after a layer of lead powder on the face, sweep a light layer of rouge, makeup simple and not lose the beauty of plain. 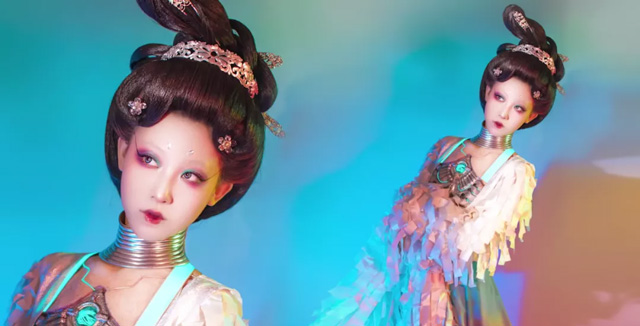 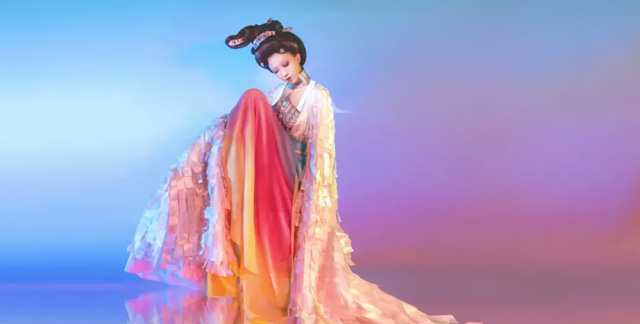 It is also worth mentioning the special effects makeup. 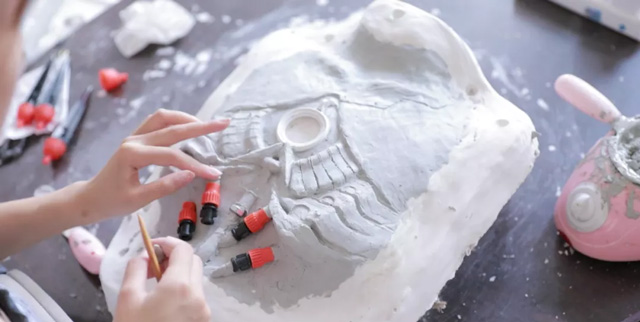 First, make a model according to your own body shape, and then sculpt it after it dries, then get a chest plaster statue.

Adding intricate decoration, it eventually became a Tang top shirt with a sense of technology.

Unlike the magnificent Tang Dynasty, this set of creative makeup highlights the graceful temperament of the Tang beauty! 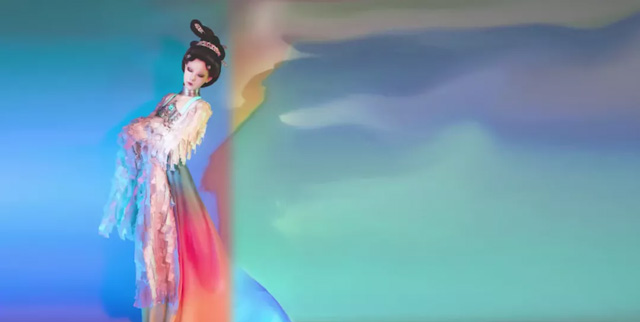 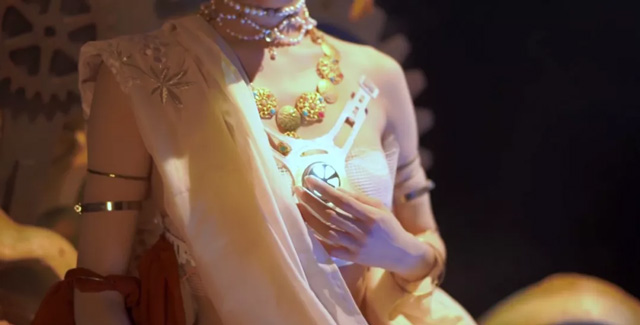 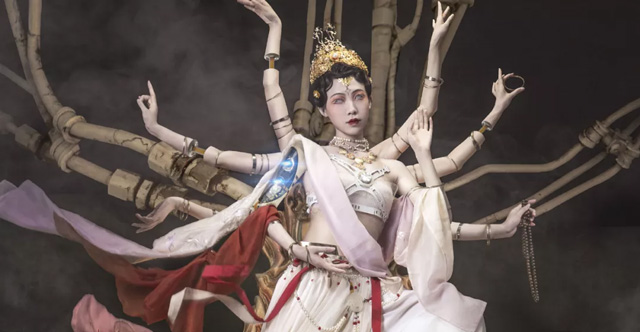 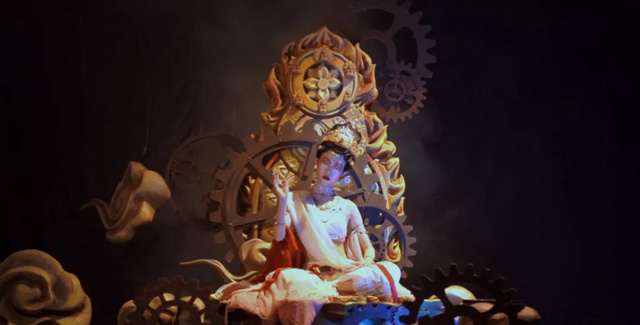 In the details of eye makeup, the Lao Ba wears eye pupils, with the overall kind of shocking, grand scene effect, it can show the emptiness, ethereal feeling.

In contrast, the other set of flying fairy makeup is more dynamic! 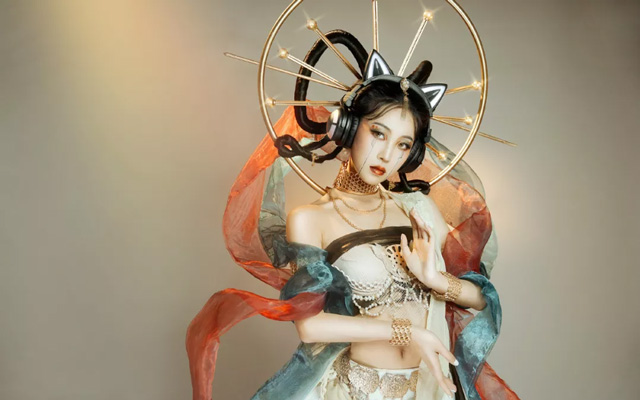 Behind each of Lao Ba's wonderful creations is her gorgeous transformation of ordinary props and her pursuit of details.

For example, the costumes in this set are made of chopsticks, wire, iron pipes leftover from plumbing repair, and a piece of carpet bought from a hardware store. 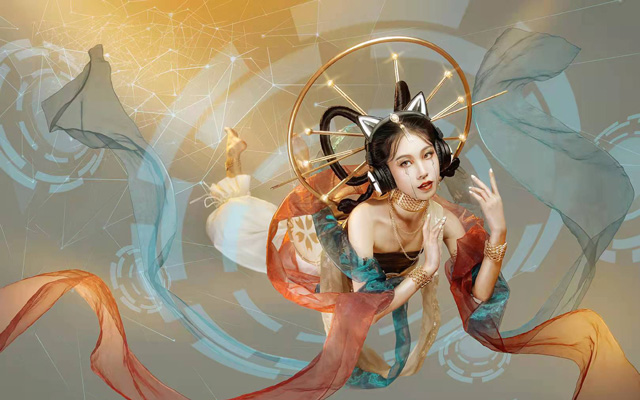 Lao Ba has created nine such looks, and the collision of traditional elements with the future and technology in each of them is amazing!

Some time ago, she started to update her new series - the city anthropomorphic series.

The first stop was "Chang'an", a thousand-year-old city under neon lights, which is most likely to remind people of the Tang Dynasty a thousand years ago, in addition to the modern bustling city. 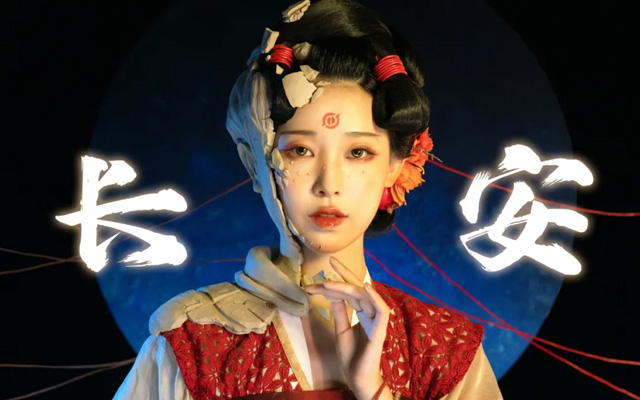 The hairstyle refers to the popular double-ringed Wang Xian bun of the Tang Dynasty, and then pin a Xi'an city flower - pomegranate flower, and wear a classic Qixiong Shanqun.

The soul of this creative makeup is - the wonder terracotta warriors! 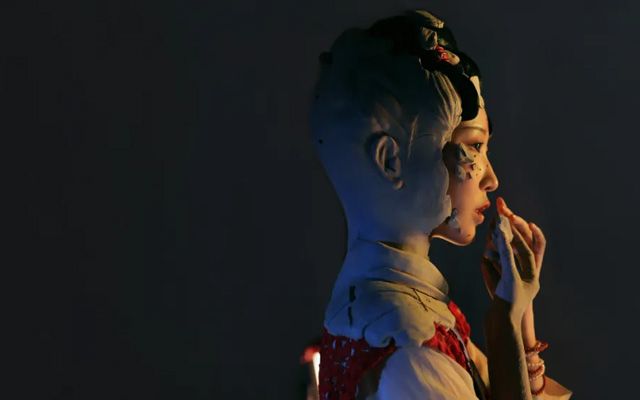 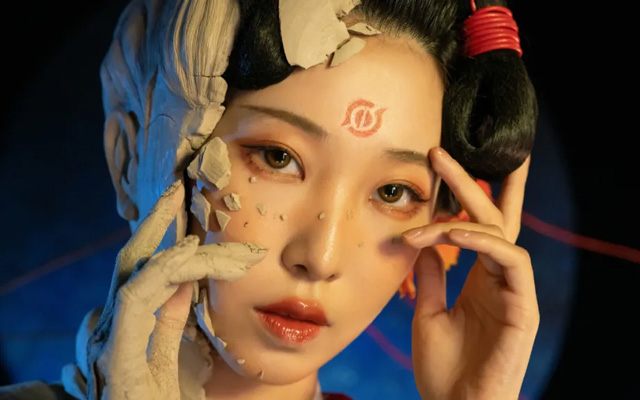 Use clay to make a half mask, air dry and then get the same Terracotta Warriors! The visual impact is full!

In the video, Lao Ba said: "I had a dream after the end of my trip to Xi'an, a dream in which the East was about to dawn, a dream in which I woke up the body that had been sleeping for a thousand years, and I was standing on the shoulders of time, talking to history".

More people are familiar with Laoba because of her the "Qian Nian Feng Shang (千年风尚)" series.

In 240 seconds, Lao Ba tries her best to recreate the portrait of Chinese women from various Chinese dynasties, from makeup to costumes.

What's more, it's comprehensive. Each type of dress comes with the change of women's position in the background of the times, which is a textbook dressing of traditional Chinese clothes!

Mainly from the inspiration drawn from the ancient painting artifacts of each dynasty, just the plain background, extremely restored makeup, the effect presented is quite great.

To spread traditional culture with heart

In life, Lao Ba is a post-95, she loved traditional Chinese clothes in high school, perhaps influenced by her costume designer mother.

Later, she became a photography teacher, devoted her spare time to ancient style photography, put all the money she earned into video creation, and now, is a full-time blogger. 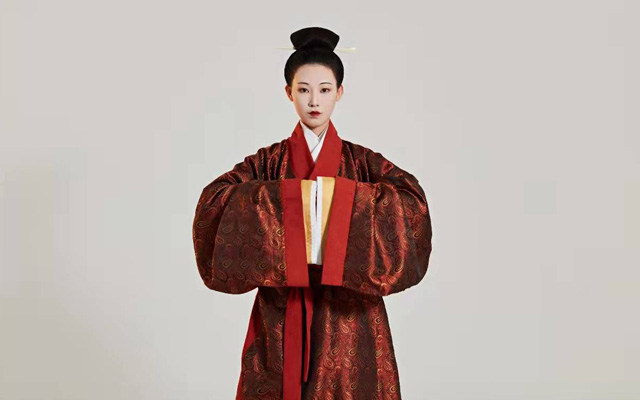 It can be said that Hanfu and traditional culture have turned from a hobby into her beloved career, and then she has been studying it more and more.

Such a blogger who spreads traditional culture with her heart can only be described as a treasure! The video quality is hard enough, the brain is big enough, will also be complete! Makeup, special effects fake skin, painting, sculpture ...... very versatile.

Lao Ba's videos can be described as "treasures"! The quality of the videos is high enough and the creativity is novel enough. From the idea to the shooting of each video, Lao Ba has put a lot of thought into it. 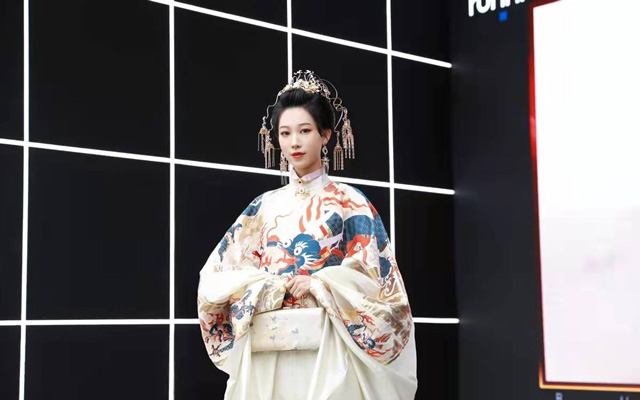 Traditional culture and modern elements blend together, and Lao Ba's attempt is the best example of this. Reviving tradition is not "sticking to tradition", it can also be combined with modern elements, and even science fiction elements to make fashionable and beautiful creative works!

Nowadays, more and more young people spread the beauty of Chinese dynasties that have been passed down for thousands of years and to bring the beauty of tradition back to the world.

Creative License: The article is the author original, udner (CC BY-NC-SA 4.0) Copyright License. Share & Quote this post or content, please Add Link to this Post URL in your page. Respect the original work is the best support for the creator, thank you!
Hanfu Makeup
Related