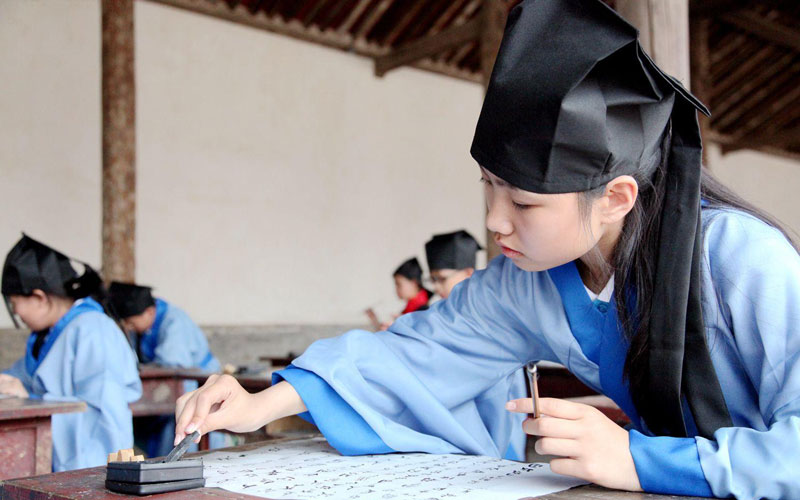 The Chinese people claim fabulous origins of remote antiquity. Its activities have always been dominated by agricultural life. An aristocratic and feudal organization, based on the ownership of fields, bound them closely together. China's social structure was modeled on family organization.

The father was the supreme authority in the home; the children owed absolute obedience to him, as well as to the emperor, the Son of Heaven, who exercised unlimited power. Filial piety and ancestor worship are two notions that have greatly influenced even neighboring countries.

In every home parents narrate exemplary deeds to their children, urging them to emulate the protagonists of these stories. Moral reform was carried out in the 5th century B.C. by the eminent moralist and politician Confucius. His writings expound in detail on behavior in all of life's activities.

He consecrated his life to the magisterium, teaching everyone, without distinction of classes. He did not pretend any innovation, but to restore the ancient teachings.

In its essential lines, his thought is aristocratic, since it seeks the instruction of the nobles and princes, instilling in them the fulfillment of duties and the spirit of discipline and sacrifice necessary for the Confucian performance of administrative functions. 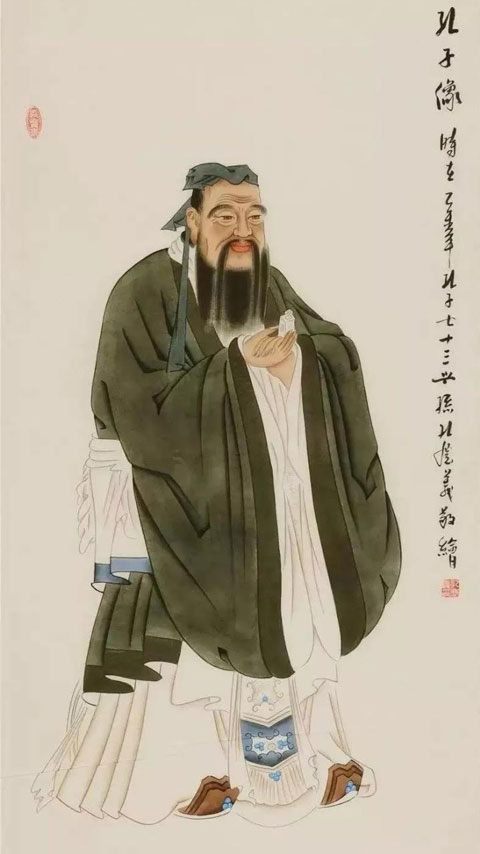 After his death, his disciples dispersed and became ministers of various reigns, preceptors, and advisors to the princes.

The sources to know the life and doctrine of Confucius are mainly the five Classics and the four Books. The Classics can be compared to the Old Testament of the Bible.

The teachings of Confucius, more than a religion are a system of morals, and can be summarized in the so-called Five correlations, which are taught to children, as we teach the Commandments: the relationship between the sovereign and the subject, of father and son, of husband and wife, of brother and brother, of friend and friend.

For more than three hundred years, Confucius was ignored by the Asian crowds; only his disciples remained faithful to his doctrine.

In 194 B.C. his importance as a unifying instrument of the empire became apparent. 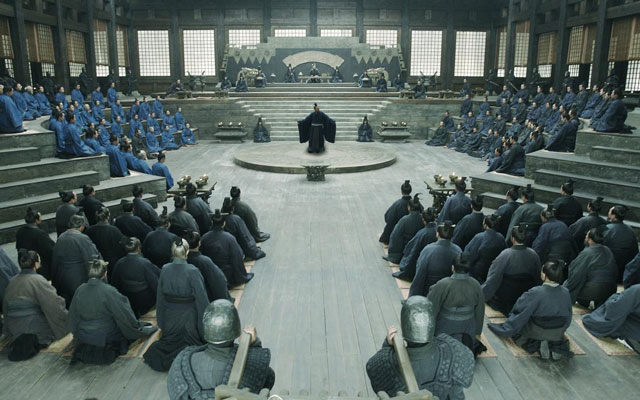 Around the 10th century A.D., Confucianism was transformed into a state religion, and temples were built, usually attached to public schools.

Chinese culture reached great splendor before the 3rd century B.C., a period of an original and highly refined civilization, to which inventions such as paper, printing, the silk industry, and the compass are attributed.

In the courts of the lords (mandarins), literature, the arts of ceramics, and the historical chronicle were cultivated, forming a powerful bureaucratic class of scholars and literati, rigid guardians of tradition and advisors to the rulers.

The language consists of 450 monosyllables, but each of them can have different meanings.

The writing is done with a brush. The so-called San-tze-kiang (Book of Three Words), which contains 1,068 words in a line of three, linked by a cadence or rhyme, serves as a manual.

One learns to draw the signs, but not to know them, by copying them from little books or official documents. What is more important is the perfection of the layout.

Sometimes the elements of reading and writing are taught by placing objects next to the signs being studied.

Arithmetic is acquired practically by consulting business people. Those who wish to specialize in certain professions (accountants, surveyors, etc.) have to contact some specialist and later perfect themselves with long practices that demand great patience.

China seems to have been the first people where teaching was a function of the state. As early as 2200 years B.C. B.C., part of the income from consumption was earmarked for the care of education. 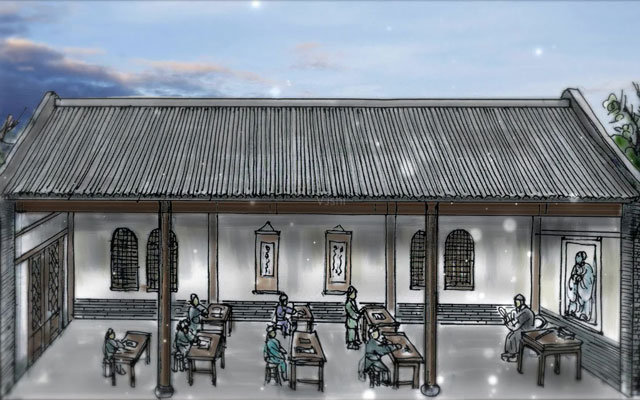 Although the contribution was moderate, few were the pupils who attended the schools and even fewer were those who succeeded in passing the exams.

The method consisted of direct and exact imitation. Everything was an exercise of memory of repetition. Discipline was severe, to such an extent that the sign to represent the idea of teaching was a hand with a stick.

China is the land of official examinations; there their advantages and disadvantages can be studied better than anywhere else.

The cultivation of the sciences usually brings immediate and personal interest; boys and big men study to keep the offices they enjoy.

This has served to maintain in that immense territory the social structure and the imperial predominance.

This is also the origin of the superficial, formalist, memoristic, and verbalist character of ancient Chinese education.

The exams were taken in writing, before examiners appointed by the government. 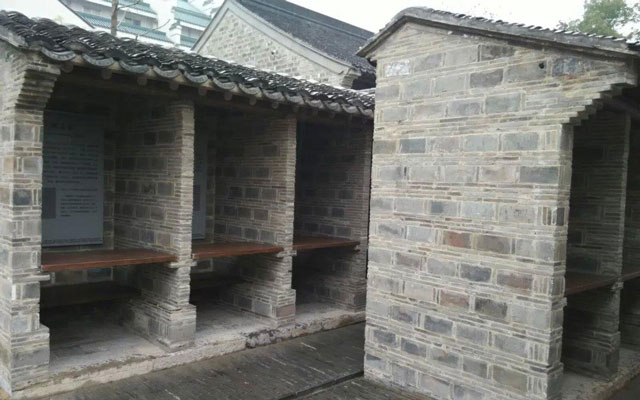 The first exam introduced whoever passed it satisfactorily, in the class of the people of letters, and it was verified in the heads of municipality; the second was held in the provincial capitals, it lasted almost one month and authorized to exercise provincial jobs; the third, in the capital, Peking, lasted three days and gave access to the highest positions of the empire; the fourth took place in the imperial palace and opened the entrance to the Academy of Sciences of Peking, which dates from the XI century of our era.

Each successful scholar obtained official rewards: distinctions exhibited on clothes or in the house; rights at feasts and ceremonies, and exemption from corporal punishment.

These examinations were of direct interest to a very small part of the immense Chinese population, who, with their bureaucratic systematization of culture, only sought the election of rulers from among those who were most capable of preserving and imitating the past. 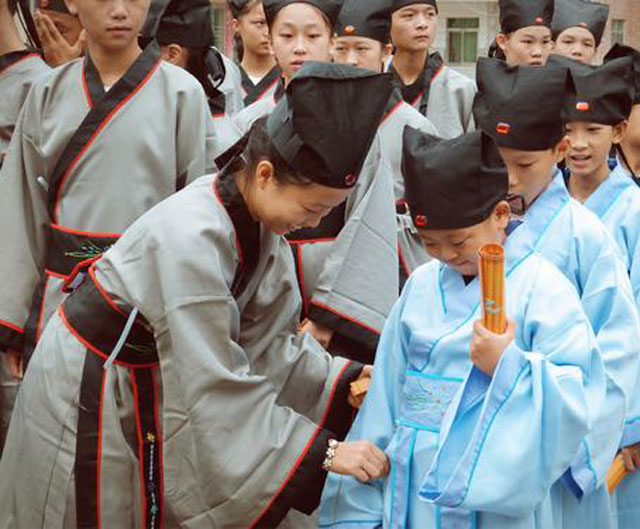 In feudal times, nobles frequented schools where they were taught the handling of the bow, the mastery of the war chariot, music, dance, and song.

The teaching ended with a religious ceremony, conferred on the young man the right to choose a wife, to participate in military expeditions, and to take part in adult enterprises.

In the schools of the capital, the officials were taught the complicated palace trades. The school of scribes taught the aspirants to draw up official records, to record events, and to describe ceremonies and rites.

The cycle of studies was, above all, literary. The King's or sacred classics were studied, the text of which was copied by the students, fixing its signs in their memory. Attention was concentrated not on the content, but on the literary form. The man who possessed this spirit of imitation, proved to possess a superior culture.

The period of higher education lasted indefinitely, and was only concluded by passing the governmental examinations for admission to some official position.

Ancient Chinese education offers negative teachings: excessive abuse of memory, disregard for the formation of intelligence and character, disinterest in the real needs of life, passivity in school work, nullification of the personality of the learner.

Its ideal consisted not in the development of the personality, but in the repression of its initiatives; there was no interest in social improvement, which was only awakened by the contact of Western ideas. Everything tended to assure the peace and the immovability of that empire.

The cultivation of intelligence was not harmonious: while on the one hand the retentive power was exercised, developing attention to the mastery of minute details, the power of initiative, invention and adaptability was lacking.

Their sacred literature is full of precepts and maxims which are mechanically repeated, and give no opportunity for moral sentiments to be freely manifested.

European methods of education were introduced in China through the influence of Catholic and Protestant missionaries. In 1898 the emperor decreed the foundation of Western-type schools.

The census of A.D. 609 recorded a population of about fifty million people. most of whom lived in despair. Paper saved Chinese civilization from perpetual war and social unrest.

Thanks to the Sui dynasty and its successors, the Tang dynasty(618-907 AD) was able to expand the examination system and give poor people the hope of acquiring wealth, privilege and prestige, provided they had sufficiently intelligent children. 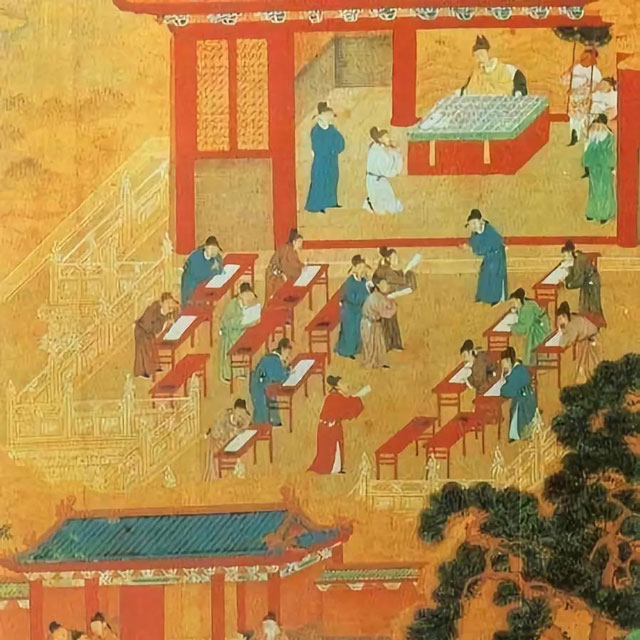 Emperor Wu's initial idea of creating a scholar bureaucracy was taken up by the Tang rulers, and the competition among poor people to pass the imperial test accelerated at great speed. Now all men could take the exams, not just those recommended by government officials. Communities paid Buddhist monks to pray for and educate poor peasants.

The curriculum was expanded to include everything from military strategy to civil law to agriculture and geography. Of course, the Confucian ethic of loyalty and obedience to the state permeated all subjects, so that all candidates, winners or not, were effectively indoctrinated.

10. Passing the Exams Could Even Mean Earning a Place in Heaven

Tang rulers claimed to be descendants of Laozi, the founder of Taoism, who lived around the same time as Confucius, in the 3rd or 4th century BC. The Taoist pantheon of heavenly gods was based on a hierarchy that accurately reflected the bureaucracy of imperial China and its examination system.

Failing the exams was considered the bitterest of disappointments, a more than likely possibility, since only 5 percent of the candidates passed the tests. Undoubtedly, some people took the news very badly. 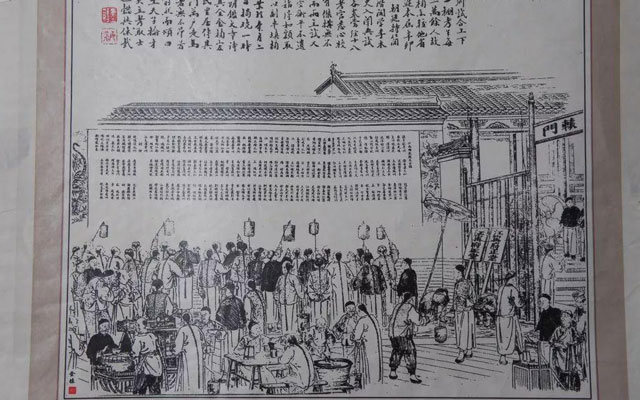 Huang Chao was one of the poor unfortunates who failed the imperial exams. As a result, he lost faith in the fairness of Chinese society and entered the salt black market.

In spite of his anger, he rallied a crowd of peasants and merchants displeased with the government for the terrible famines and droughts they had recently suffered.

In 875, Chao's makeshift army rebelled against the Tang government and provoked a civil war that lasted nine years. By 880 the rebels had sacked the capital of Chang'an and the entire imperial court had to flee.

Chao then managed for a short time to form a new government.

Although the Tang regained the city four years later, it was a former commander of Chaos army, Zhu Wen, who brought about the final collapse of the dynasty in 907.

Who Was Confucius? [A Important Person in Ancient China]