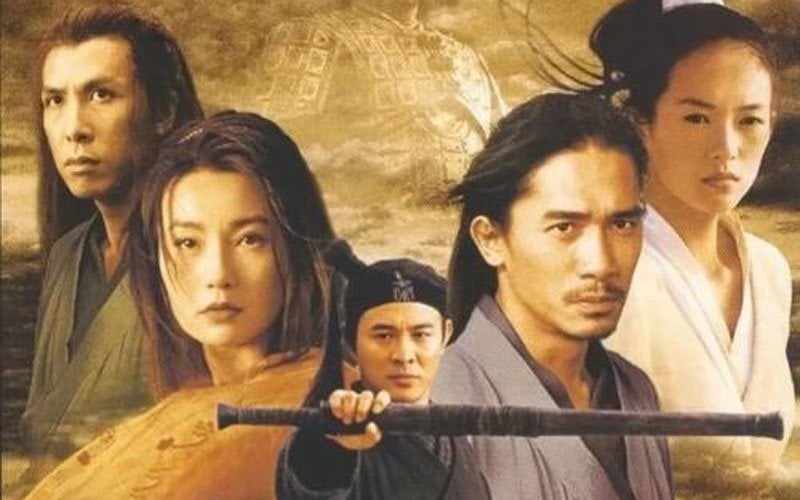 Recently when talking to my friends about Chinese movies and which is the favorite Chinese martial arts movie, everybody answered a lot of different movies. However, everyone has mentioned Hero, a 2002 release directed by Zhang Yimou and starring Jet Li.

In "Hero" we can see that Jet Li is always so heroic, Liang Chao Wei is still so melancholy and charming, Zhang Man Yu is beautiful, Donnie Yen plays smoothly, Chen Daoming must be bossy and Zhang Ziyi is lovely and pure.

But even with so many big names backing it up, the film felt like a flash in the pan and even drew a lot of criticism. The Hero quickly became a forgotten film, a forgotten milestone.

1994 was the pinnacle year in the history of world cinema, and has even been hailed as a legend that cannot be surpassed. That year we remembered the classic line from Forrest Gump's mother, "Life is like a box of chocolates, you never know what you're going to get."

And The Lion King is the most classic animated film in Disney's history and a fond childhood memory for many post-80s young people. This Killer's Not Too Cold, The Burning Years, The Shawshank Redemption. There were just too many classics that year.

It was also the year when Chinese cinema had its "best time". The Journey to the West has pioneered a whole new wave of artistic thinking. "At its closest, the distance between me and her sword was only 0.01 centimeters, and 57 hours later, I was in love with this woman," became a household word.

In mainland China, the fifth generation of directors, represented by Chen Kaige and Zhang Yimou, after the reform and opening up of China, have given such epoch-making works as "Alive", "Farewell to the King" and "Sunny Days". The directors take a break from the 'model play' and revisit the history they have experienced. In their films, you can see real characters, real scenes, and most importantly, real feelings and life experiences, which was the period of enlightenment when Chinese cinema began to come into reality.

And after all this exploration and brilliance, the Chinese cinema that has gone through the millennium is lost. After telling the story of "That Mountain, That Man, That Dog," and "My Mother and Father. In a society where the 21st century is fast becoming unreadable, there's nothing we can tell but our true stories.

It was at this time that "Hero" came out, bringing Chinese cinema to a whole new era.

Behind reaping many firsts, "Hero" has drawn countless scolds. I'll admit that I'm not obsessed with Zhang Yimou, nor is "Hero" the great movie that I have in mind.

But it cannot be denied that it is indeed a milestone in the history of Chinese cinema, the beginning of a change.

There is no doubt that "Hero" is a martial arts movie, but unlike other martial arts films, it doesn't fight from beginning to end over a grudge or a conspiracy or power struggle. In fact, the plot is very simple and straightforward, "Assassinate Qin". A man goes to assassinate the King of Qin and the result is nothing but success or failure.

Such a slightly hollow plot, director Zhang Yimou used multiple scenes to set off multiple story sequences, and the film used color to capture the core of each story, converging various colors into a whole under interlaced camera transitions. The use of warm and cold tones gives the film a beautiful picture of China. Soft and fragrant, majestic and magnificent.

Those who are familiar with Zhang Yimou know that his mastery of light and shadow and his ability to express choreography are unparalleled in China and the world. ( If you do not agree, please refer to the opening ceremony of the 2008 Beijing Olympics)

There are many elements to watch in the Battle of the Chess Hall, not only swords, but also Go, raindrops, architecture, as well as the sound design of the guqin, Peking opera chants, and so on, each of which can be extended. For example, the ancient meaning of Go, its infinite variations, and its ability to attack and defend.

The biggest surprise is the martial arts of intention. The use of ideas is the greatest takeaway from the martial arts design of this film. If we watch a lot of cartoons and movies, there are often depictions of the killing spirit, most of them are the kung fu where the wind blows and the chickens are scared and fly around. But this conventional expression is just too ordinary, and the realm is not high.

Zhang Yimou thinks the highest level of the showdown is to win without a fight, but he seems to be worried that the audience won't understand, so he lets Nameless come up with an explanation and make his intentions clear, letting this kind of martial-arts-intentioned showdown take place in a big duel.

In addition to showing the force of chivalry in a martial arts film, its emotion, what we call chivalry, is another important part of the display.The emotions of a chivalrous man are closely related to his worldview, some chivalrous men break their arms for love, while others pursue a realm of unity between heaven and man.

In Zhang Yimou's shot, the people are all particularly small, and there are large panoramic and far-seeing scenes here, but because of the tranquil environment, the characters perform the graceful pose of floating on the water, and this special beauty makes people feel that these two people are not engaged in a battle of life and death, they are dancing and performing some kind of ritual.

Putting aside the business model it pioneered, Hero actually had high aesthetic value, but it didn't get a good review at first. I believe everyone knows that there is a theme of peace that Hero is trying to say, and these two words are uttered by the King of Qin and seem to have different meanings to different people.

Many people see the King of Qin as a tyrant, although they also recognize that the King of Qin unified the world and ended the strife since the Spring and Autumn Period and the Warring States. Some critics have accused Zhang Yimou of catering to foreign audiences, but only for the "Oscars."

But in all fairness, Zhang Yimou is one of the best directors in the world who can use all the elements of a film. In Hero, color is used to the extreme, for example, the color of the clothes the main character wears in each narrative is the same as the characters’ minds.

In Zhang Yimou's shot, the people are all particularly small, and there are large panoramic and far-seeing scenes here, but because of the tranquil environment, the characters perform the graceful pose of floating on the water, and this special beauty makes people feel that these two people are not engaged in a battle of life and death, they are dancing and performing some kind of ritual.

Of course, Zhang Yimou also inevitably has weaknesses, such as not being able to tell a story, being too colorful, and being accused of being pandering and wasteful. However, this does not detract from the fact that "Hero" is a crossover film that ushers in a new era of Chinese cinema.