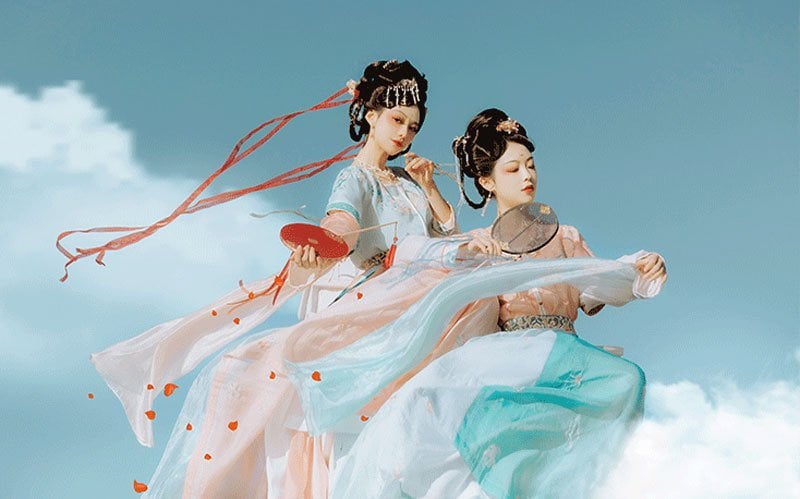 With the movement and innovation of Hanfu, more and more new styles of Hanfu have appeared in our eyes, but those who are new to Hanfu may not know much about its style, so they don't know where to start to understand Hanfu style. Today, we have collected some basic styles of Hanfu and their corresponding historical prototypes, so let's experience the ancient Chinese fashion together.

The Hanfu costume "began in Huangdi (黄帝) and was perfected in Yao (尧) and Shun (舜) ", and was styled in the Zhou Dynasty, and through the Han Dynasty, a complete system of headwear and costume was formed based on the Four Books and Five Classics.

Ruqun is a top garment and skirt in Chinese, it is one of the earliest and most basic forms of Hanfu. "Ru", is a short garment, with collar style with parallel collar, crossed collar, or shawl collar (U-shaped collar). "Qun", is a skirt, is usually a one-piece or two-piece.

The term "Duijin" refers to the symmetry of the left and right lapels of the Ruqun, and need wearing of an inner Moxiong(camisole). Duijin Ruqun was mainly popular in the Song Dynasty.

Compared to other Hanfu forms, the Ruqun has a distinctive feature: the top is short, the bottom skirt is long, and the ratio between the top and bottom reflects the requirement for a golden section with rich aesthetic connotations. Ruqun shares a common feature: flat cut, multiple edges, ribbon ties, variation in the Ru mainly on the collar, and a skirt that reaches to the upper shoe. 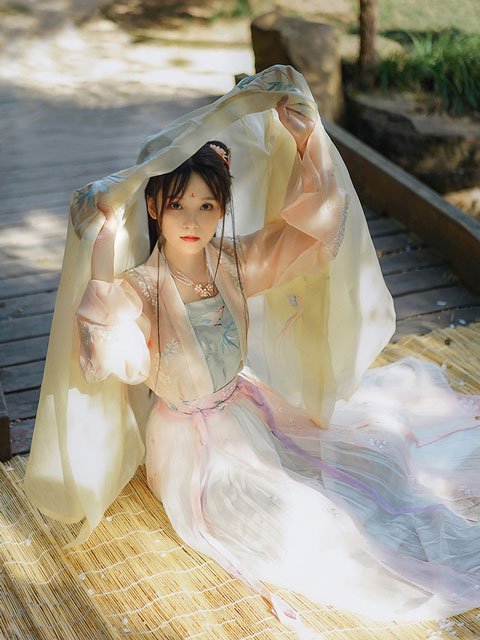 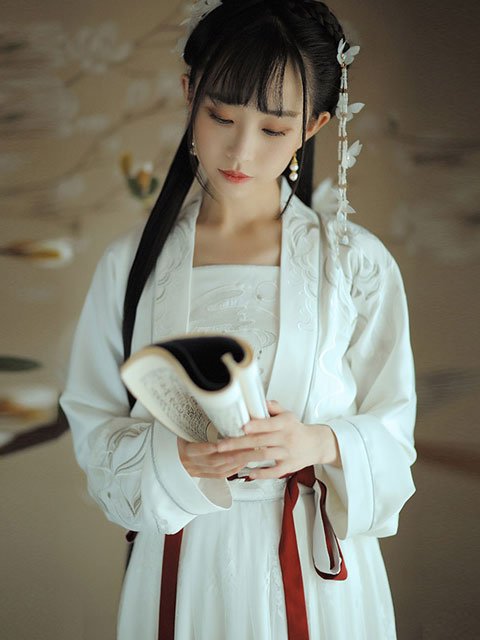 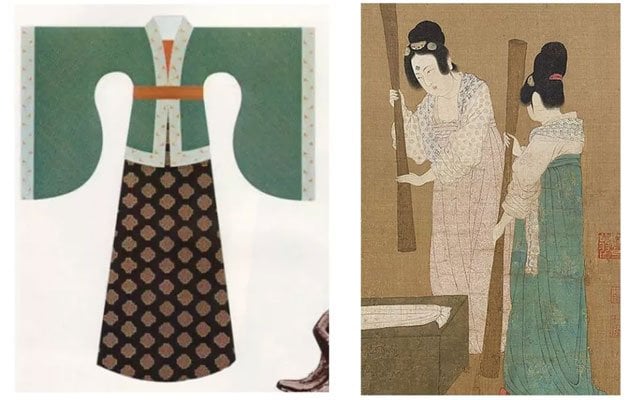 Note: Pictured is Qixiong Ruqun, but the tops are all Duijin style, the skirt's waistline is not the same.

It is characterized by a top garment with a cross-collar. The Jiaoling Ruqun was quite common in ancient China and could be worn by both men and women.

It should be noted that, according to the tradition of Han Chinese dress, dressing is done in the manner of Jiaolingyouren (交领右衽), wrapping the right side before the left, forming a y-shape. 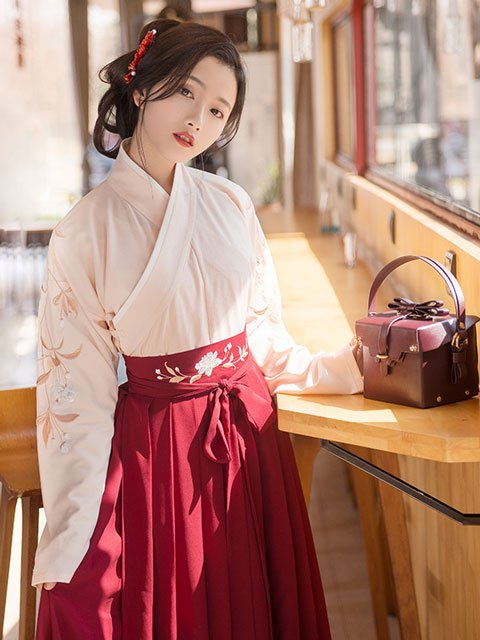 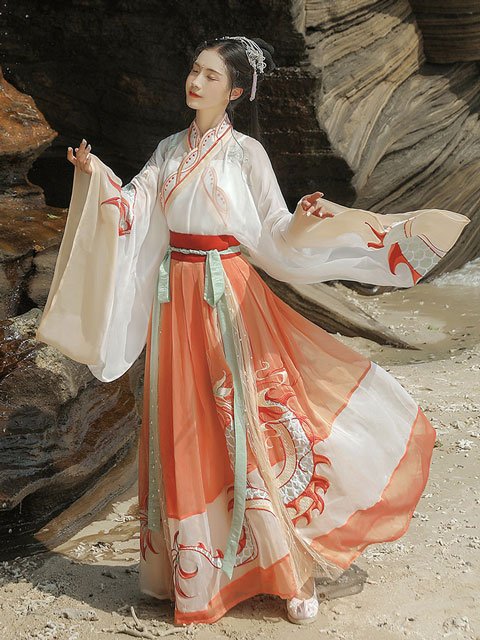 From the Northern and Southern Dynasties to the Sui, Tang, and Five Dynasties, a special type of Ruqun appeared: the Qixiong Ruqun. The lower skirt was to be tied under the armpits. It was very popular among Tang dynasty women, and many ancient paintings and excavated relics have traces of it. 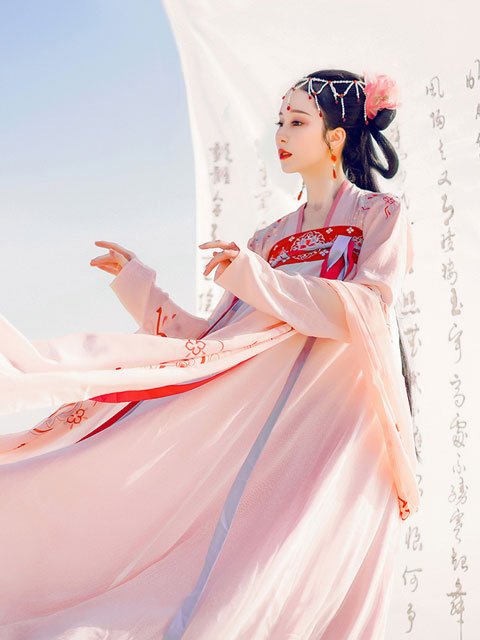 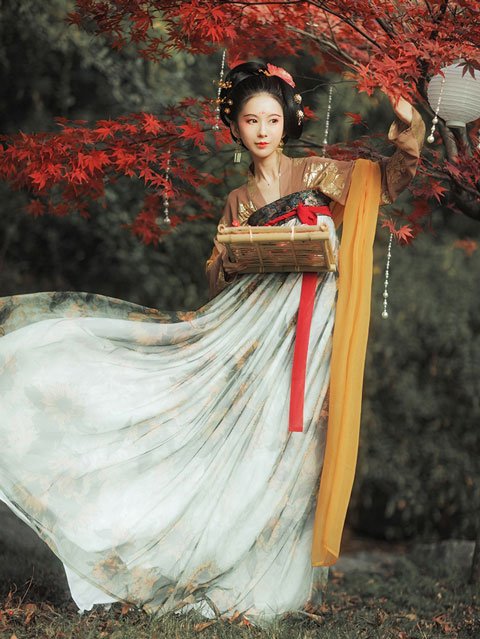 Tanling, also known as U-collar, is a kind of Han clothing Banbi (半臂), a short outer garment developed from the top since the Wei and Jin dynasties.

As a result of the widespread popularity of Hu culture among the various strata of the Tang dynasty at the time, it became a fashion for Tang women to wear small-sleeved clothing, which was popular in the Sui court, first worn by women in the court, and then spread to the people in the Tang dynasty, where it remained popular for a long time. The Tanling Ruqun was already an ancient Chinese fashion at that time. 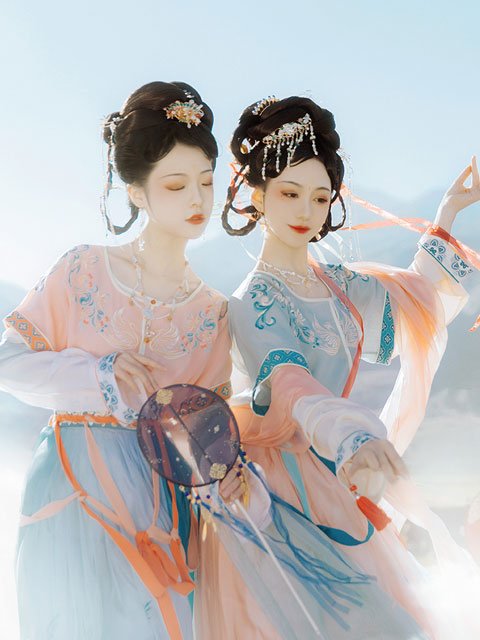 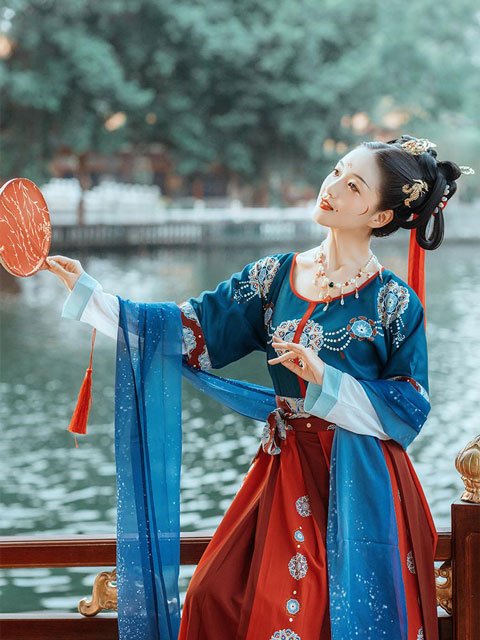 Aoqun (袄裙) is a general term for the ancient Han women who wore a coat on the upper body and skirt on the lower body. There are records of Aoqun wearing since the Tang Dynasty. The modern term generally refers to the Aoqun suit of the Ming Dynasty. 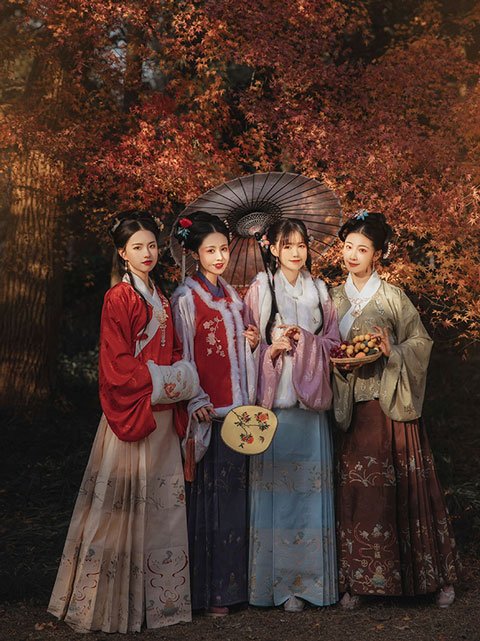 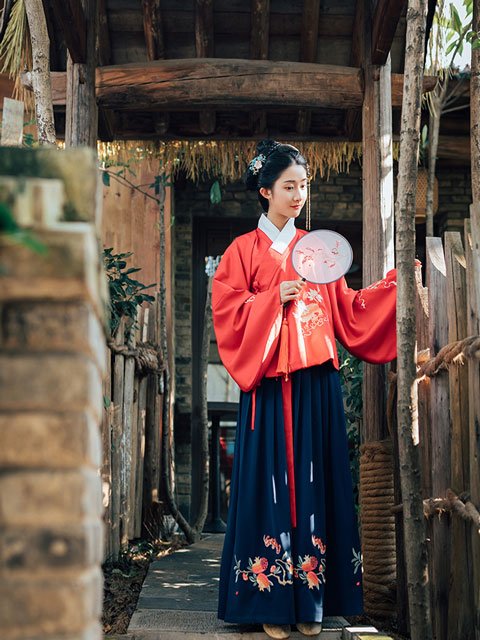 Beiz is a kind of traditional Chinese costume, mainly with a straight, parallel collar, slit under the armpit, tied at the waist with silk, and knee-length. 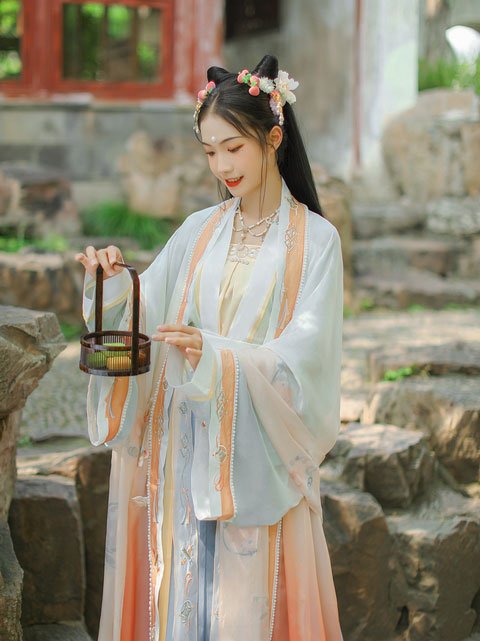 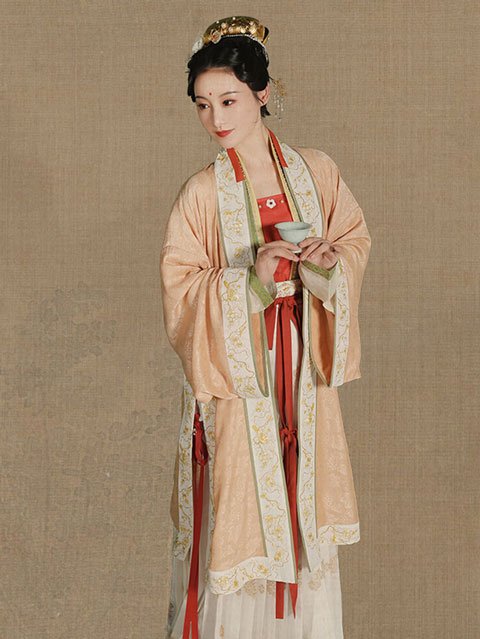 The above is about the basic styles of Hanfu and their corresponding historical prototypes, more about traditional Chinese clothing and Hanfu history & culture can click here.