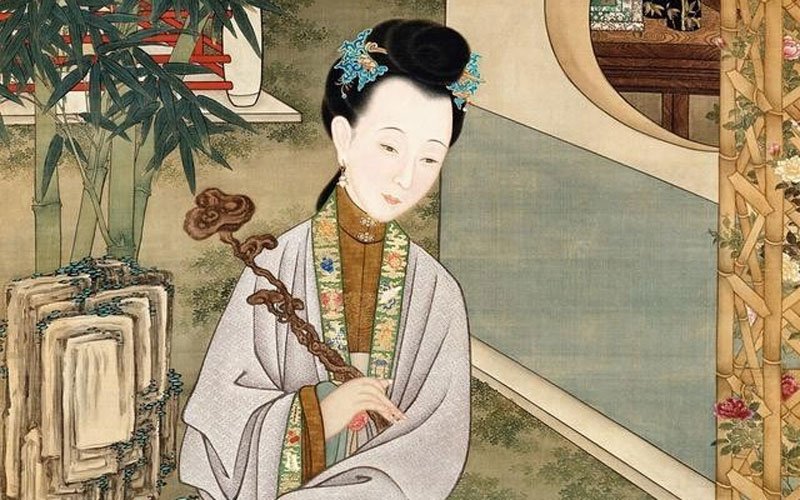 There are very many classical Hanfu drawing in ancient China, and the ancient painters used their brushes to record the scenes of life at that time, which also gives us the opportunity to get a glimpse of the splendor of the ancient costume culture through Hanfu drawing.

The Twelve Beauties, now in the Palace Museum in Beijing, is a heavy-colored brush painting of figures by a court painter of the early Qing dynasty. Each painting has the same dimensions, 184 cm in length and 98 cm in width, and is painted on fine quality silk paper.

The work is in the form of a single painting of a single person, each depicting the leisurely life of 12 ladies dressed in Chinese costume Hanfu in the court, but also a realistic approach to realistically reproduce the headdress, clothing, hairstyle, jewelry of women in the Palace of the Qing Dynasty.

Today, after more than 270 years, this set of drawings is still intact, and has become the most vivid and true historical material for studying the culture of women’s hairstyles, jewelry, and costumes in the court of the early Qing Dynasty. 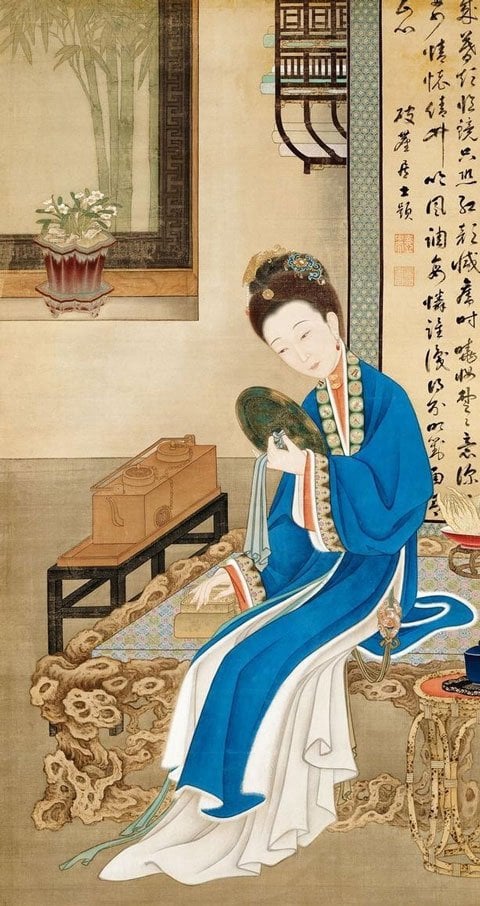 The lady is dressed in a fur coat, wearing a jade pendant at her waist, with one hand on the stove to keep the cold at bay, and the other hand holding a bronze mirror, admiring herself in the mirror with an air of helplessness.

In the background of the painting is a hanging scroll of a seven-syllable poem in a running-cursive script, inscribed with the title “Pochen Jushi Ti”. This is the elegant name that the Yongzheng Emperor (雍正皇帝) chose for himself before he became the emperor, which indicates his interest to be pure and free from desires, and not to ask about honor, shame and fame. 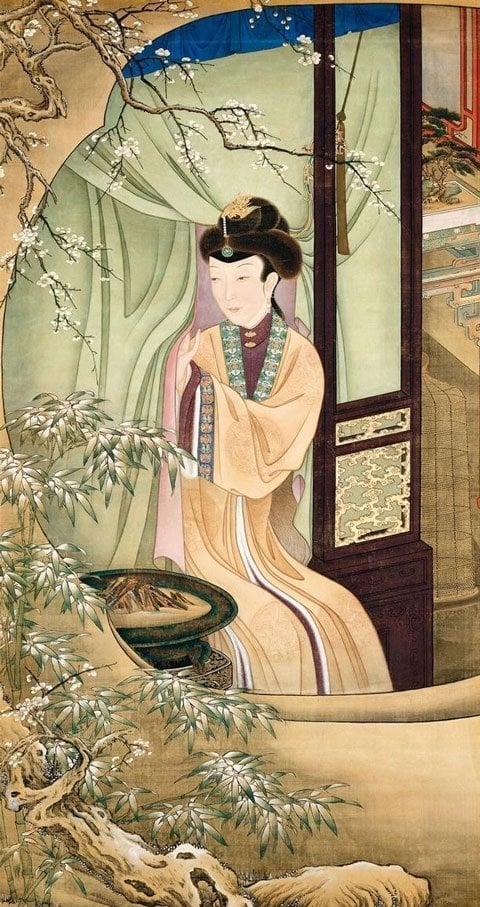 The lady sitting near the window, lightly lifting the curtain, watching the snow, and enjoying the plum blossoms. Outdoor bamboo, covered with frost and snow, does not wither in the cold, showing resilience. The white plum blossoms with the charm. The plum blossom is not only a famous ornamental flower but also a symbol of happiness, longevity, and good luck. 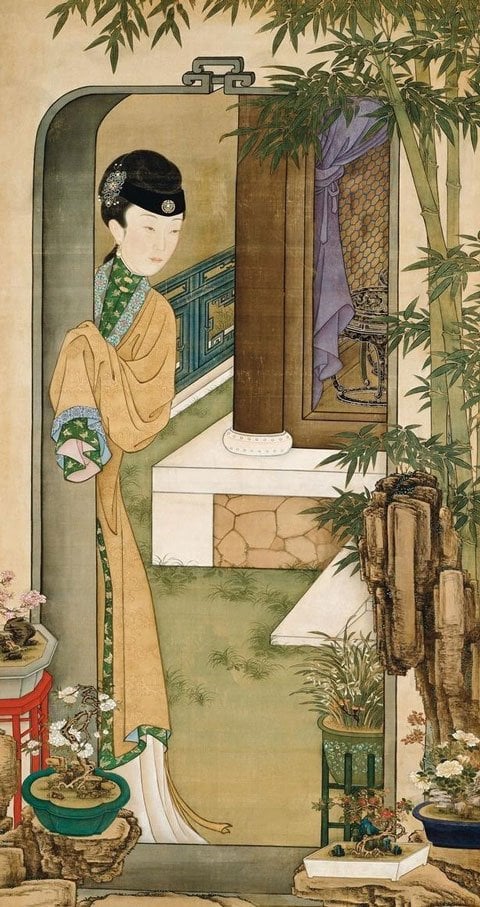 In the courtyard, flowers, plants, bamboo, and rocks are all over the eyes, and placed with fragrant orchids, moon seasons, and other colorful bonsai, competing with each other, with graceful posture decorated with beautiful scenery. The lady leaning against the door looking at the garden full of spring colors, demeanor seems to reveal a faint sigh of spring feelings. 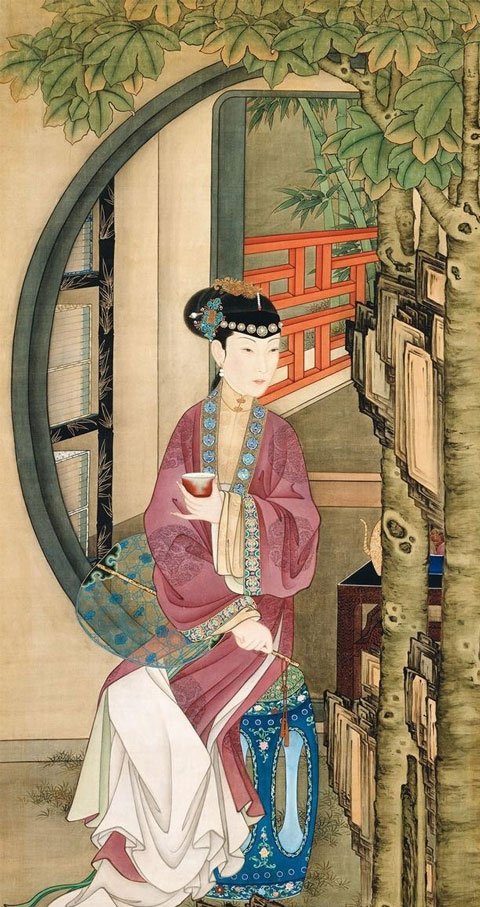 The lady holding a gauze fan, sitting in the dense sycamore tree, quietly tasting tea. Tea was originally a kind of daily eating behavior, due to the prevalence of tea tasting theory, and become the elegance of the literati in successive dynasties, and gradually improve the realm of tea.

The bookshelf behind, full of books not only adds a Confucian and elegant flavor of books to the picture, but also contrasts with the tea set in the hands of the ladies, showing the cultural cultivation of women in the palace. 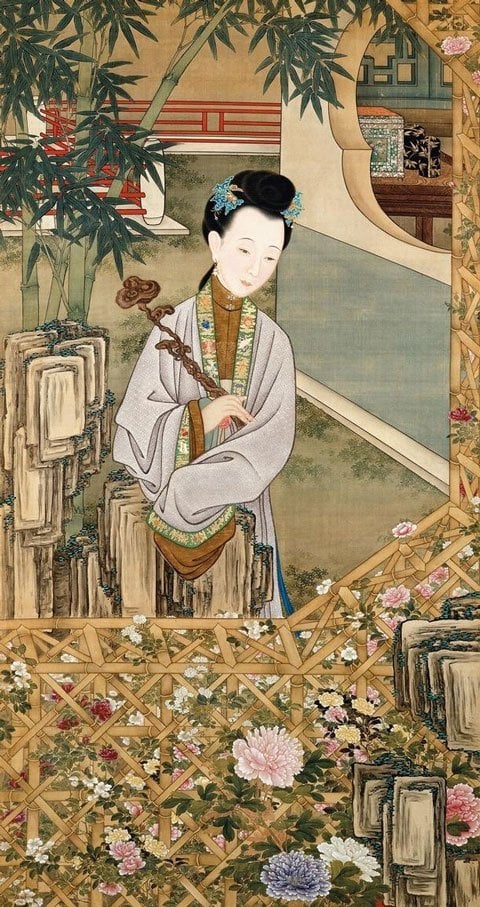 A lady holding a Ruyi (如意), standing in the courtyard, enjoying the flowers. The bamboo hedge is decorated with flowers. The painter highlights peonies of various colors, including purple, pink, white, and red. The peony is known as the “King of Flowers” because of its gracefulness and splendor and rich fragrance and has become a symbol of good fortune, wealth, and prosperity. Combined with the bamboo Ruyi carved in the woman’s hand, it embodies the wish for “wealth and prosperity”. 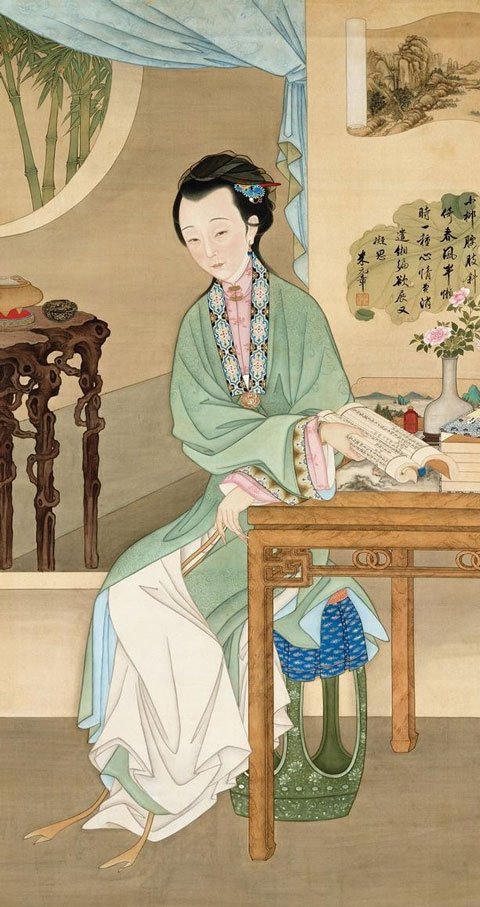 A woman holding a scroll, and the background is decorated with small scenes of landscapes and poems by Mi Yuanzhang, a famous poet and calligrapher of the Song Dynasty. The image of the woman reflects the “sentimental” beauty common in Qing dynasty paintings of ladies. 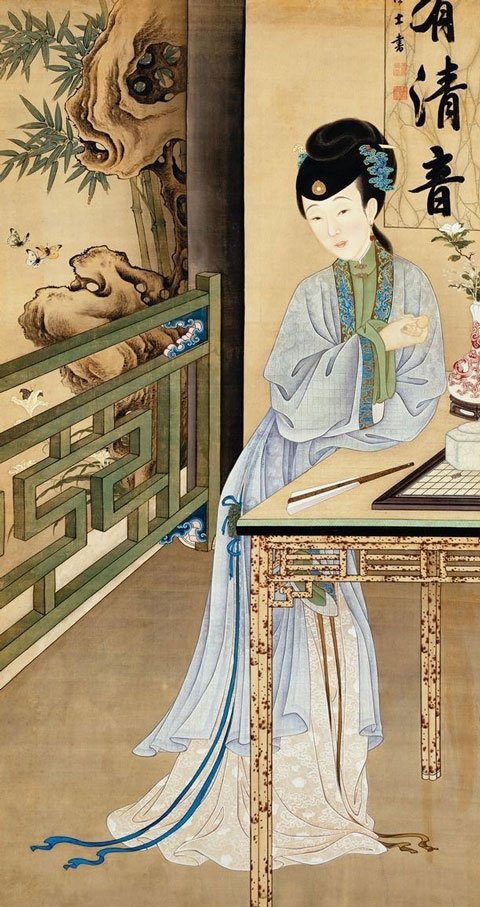 The painting depicts the ladies’ summer leisure, but it expresses the auspicious will to beg for a son. The painter skillfully painted the day lily and the gourd on the side of the stone, in the palm of the hand, not only increased the ornamental picture but also contains the deep meaning of begging for a son. 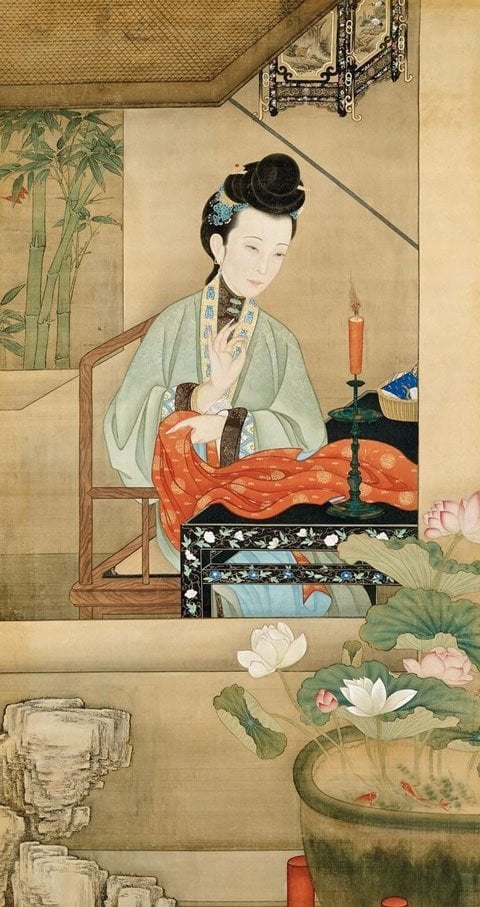 The breeze is gentle, the red candles are flickering, and women are diligent in needlework. Nvgong (女红) including weaving, embroidery, sewing, etc., is one of the important standards for evaluating the character of ancient women. Therefore, women, whether rich or poor, were good at Nvgong as a standard.

In this picture, the woman threaded her needle, and lowered her eyebrows, thoughtfully. A red bat is flying among the green bamboo outside the window, and the auspicious meaning of “good fortune will come” is subtly embedded in the painting. 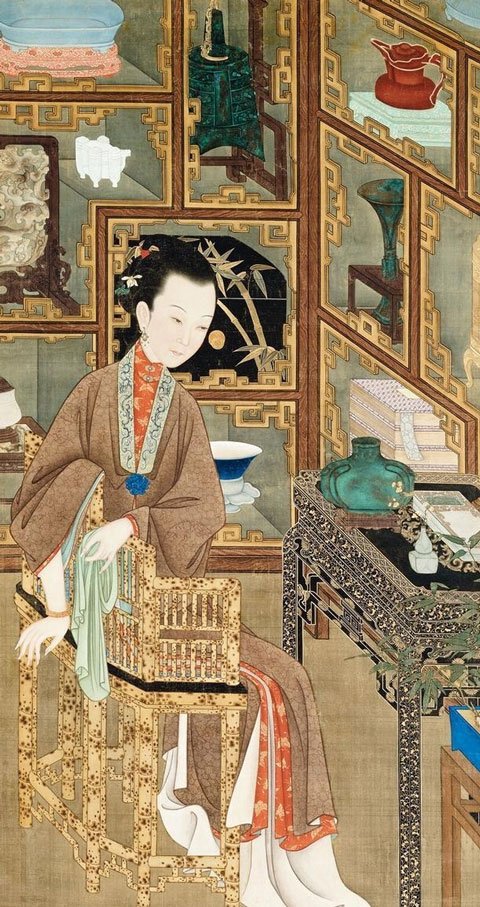 The maiden sits on a bamboo chair and contemplates. Surrounded by a variety of artifacts. Shelves placed on a variety of porcelain, are the most prevalent for the Kangxi to Yongzheng period furnishings, with a typical royal style of wealth and nobility. These objects not only add to the authenticity of the picture, but also reflect the interest of the lady. 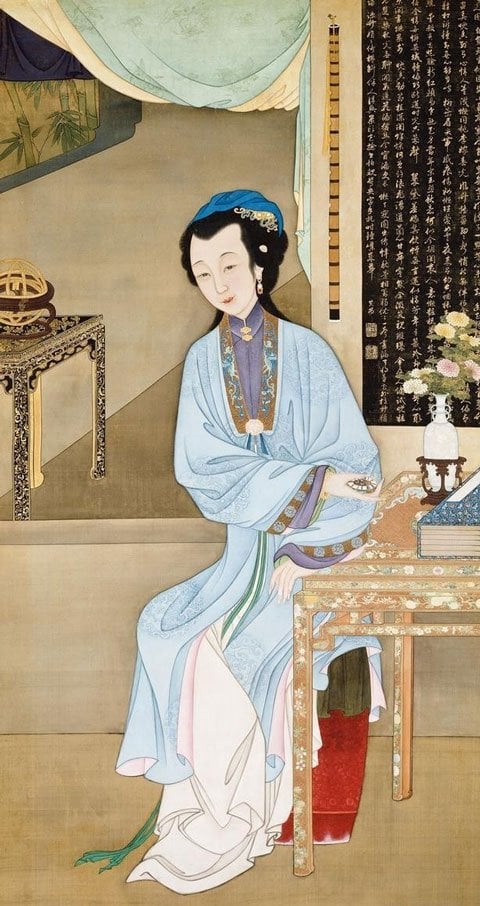 The lady sits beside the desk holding a beautifully enameled watch. The chrysanthemum in a vase on the table indicates the time of the month of August. The chrysanthemum is an important ornamental flower in autumn, which is endowed with meanings such as chastity and longevity, and at the same time becomes a headdress for women or a decorative piece in the room because of its simple and elegant natural beauty.

A poem by Dong Qichang of the Ming Dynasty hangs on the wall in the background. Western astronomical instruments and enameled watches in women’s hands indicate that Western objects have gradually become fashionable in the palace. 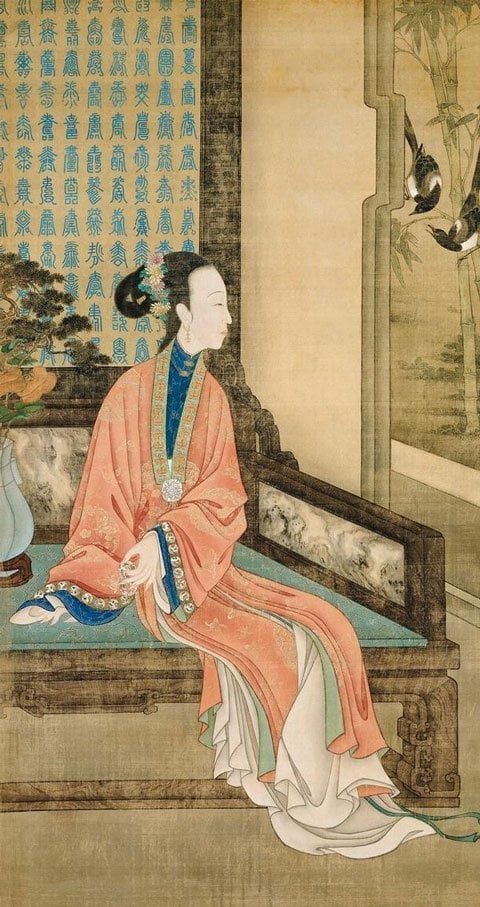 Indoor ladies leaning, playing with a Hebi Lianhuan (合璧连环), outdoor magpie chattering, women visual magpie, do not feel entranced. The painter intended to show the alternate season of winter and spring, the woman viewing the magpie when the mood of pleasure, but unconsciously the women in the palace spirit of emptiness, loneliness, and depression overflowing in the picture. The back of the screen is filled with the word “Shou”, a prayer for longevity and longevity, but also no match for the “only envy mandarin ducks, not envy fairy” prayers. 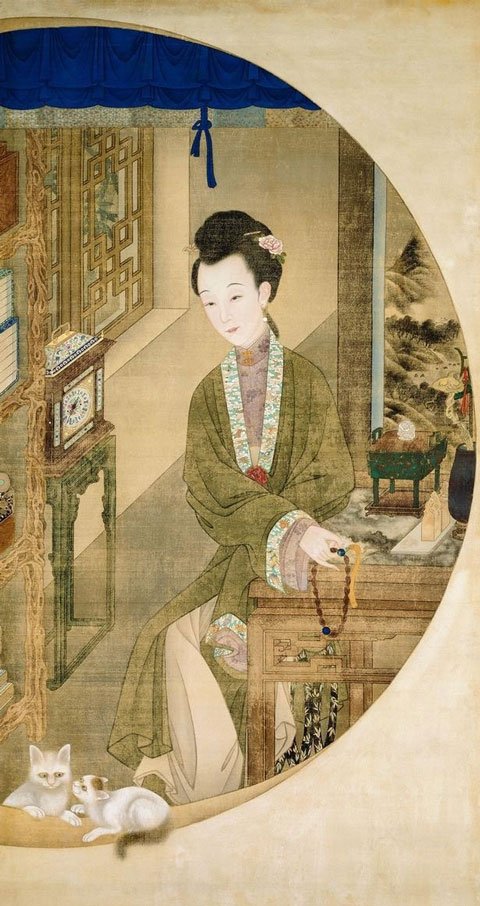 The lady is seated in front of the round window, leaning lightly against the table, twirling a rosary in one hand, watching two playful cats.

However, because the artist has adopted the focal perspective method of Western painting, the three scenes in the distance, middle, and near are arranged in an orderly manner, thus expanding the depth of the space and making the painting seem long and meaningful. The clock ticks below the window, the cat plays nearby, and time passes quietly.