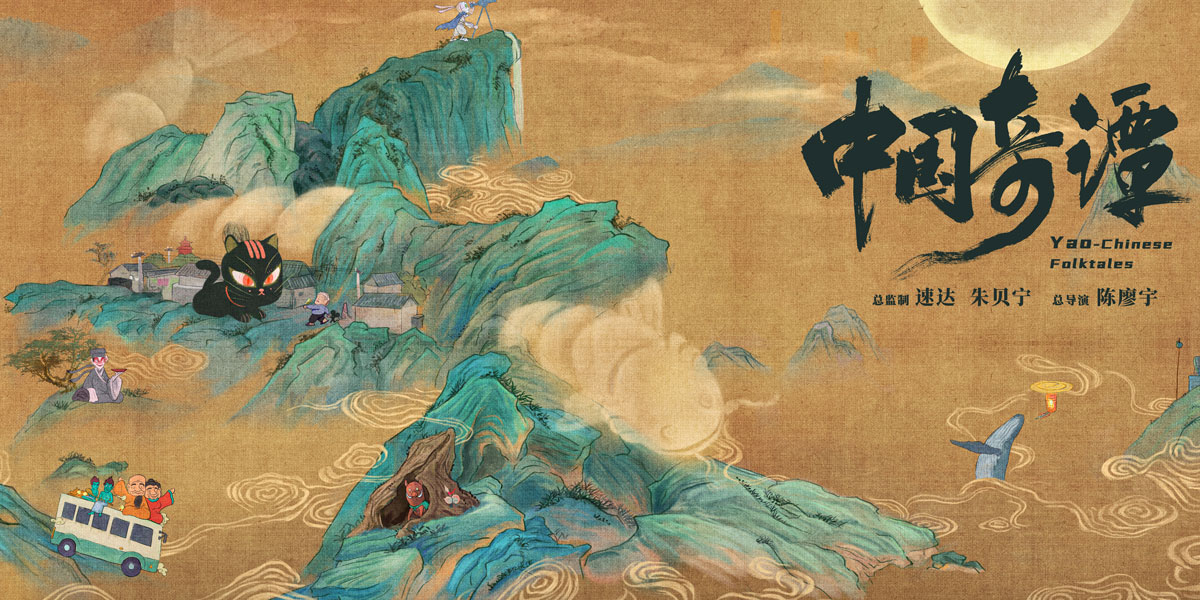 Recently, a Chinese animation has burst into the list of major platforms in China like an dark horse. It is Yao-Chinese Folktales, a collection of animated works jointly produced by Shanghai Animation Film Studio and Bilibili. It consists of eight independent stories rooted in traditional Chinese culture. At present, it has been broadcast in 3 episodes with more than 45 million views. 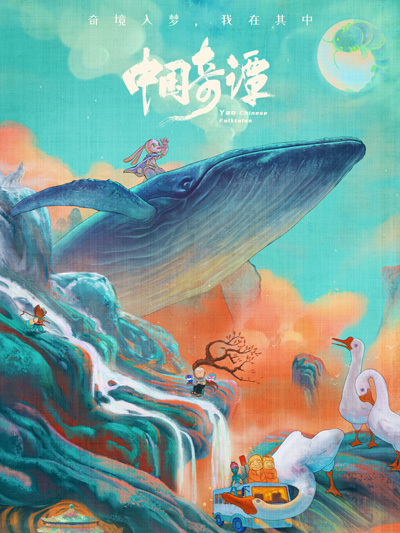 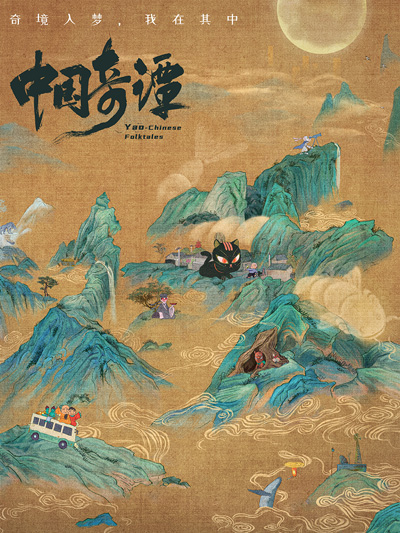 In the Chinese animation industry, it goes without saying that Shanghai Animation Film Studio has high artistic achievements and a unique style, but because of the changes of the times and talent faults, it has fallen into a dilemma. However, "Yao-Chinese Folktales" seems to indicate that this old brand of film studio is back.

The theme of Yao-Chinese Folktales is monsters. Monster has a rich meaning in Chinese traditional culture. It is not necessarily just a fierce and grotesque image. It represents the abnormal and unknown, getting along with and fighting with human beings, and may also be another side of human beings. The eight stories vary in style and core.

The title of the first episode is Nobody, which tells the story of ordinary little monsters in "Journey to the West", but there is a familiar feeling of human society everywhere. The main character, the wild boar monster, is a bottom-level monster on a small hill. Like other monsters, the leader also regarded the flesh of the Tang Monk as the ultimate dream. When he heard that Tang Monk and his disciples would pass by this place in a few days, he asked his men to prepare weapons, cauldrons, ingredients, and so on, and those who performed meritoriously could also have a mouthful of soup.

Unfortunately, small things are mixed with a lot of complexity. This leader on the mountain shows the worst aspect of the workplace, the phenomenon of seniority is serious. The wild boar monster and his buddies received a quest to make a large number of arrows. In the process of making, the wild boar monster had a brainwave and plucked out the raven's feather to make the arrow aim better. However, his direct leader bear monster, accused him of "You are telling me?". The image of middle-level leaders who are submissive to the top and fierce to the bottom came alive.

Originally the meat of the Tang Monk was to be stewed in a pot, and the little monsters could still drink soup. However, it was changed by the leader to roast, requiring to the collection of 2,000 kilograms of wood.

Making frequent changes in policies, fawning upon one's superior and insulting one's subordinates, unrealistic. How can things be done? This is destined to be a failed round-up. The monsters were in full swing as if the meat of the Tang Monk was already belonging to the King. In fact, they were easily defeated by Sun Wukong.

If "Nobody" is a realistic story with neat structure and exquisite details, the second episode of "Goose Mountain" is left blank and freehand, fantastic and strange. Chen Liaoyu, the chief director, called it "A short film with the most outstanding characteristics". "Goose Mountain" is adapted from the prose of "Yang Xian Shu Sheng" by Wu Jun, a writer of the Southern Dynasty. 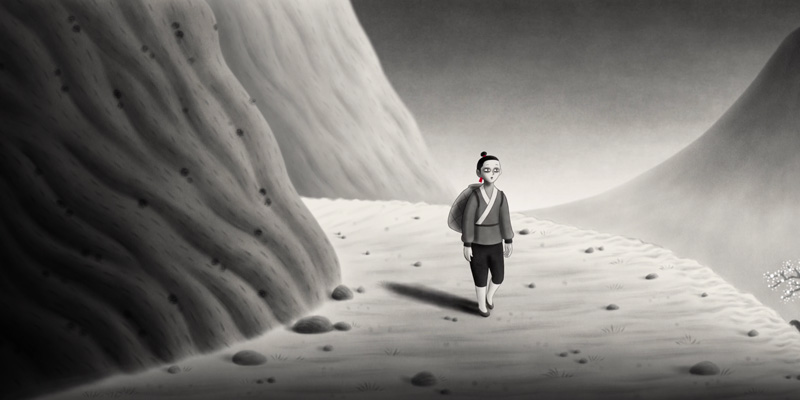 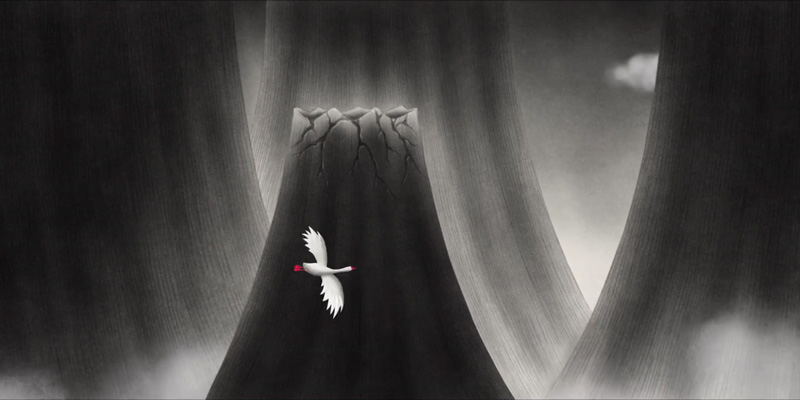 On the way of delivery two geese, the pedlar enters the goose mountain, and meets a crippled fox scholar (monster) accidentally. And he asked the pedlar to send him to the top of the mountain. After reaching the top, the fox scholar invited the pedlar to drink and spit out his sweetheart rabbit monster from his mouth. And the fox scholar went to sleep, the rabbit monster spits out the boar monster, and the boar monster spits out the goose monster. And the goose monster unexpectedly made the pedlar's heartbeat. The sweetheart also has sweethearts, who are nested layer by layer and don't know each other. In the end, it all came down to the fox's mouth. 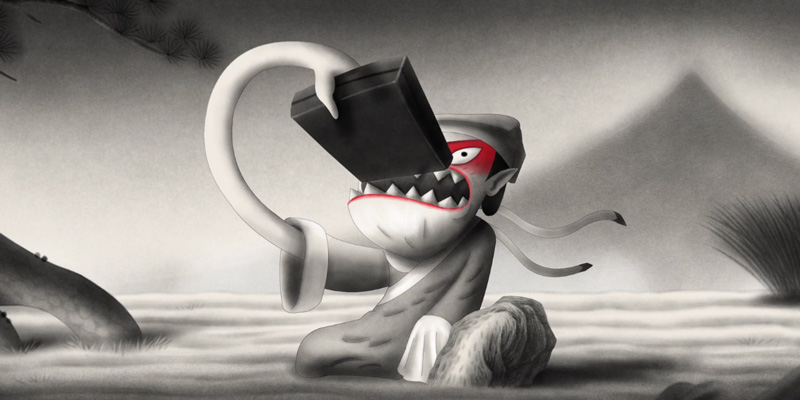 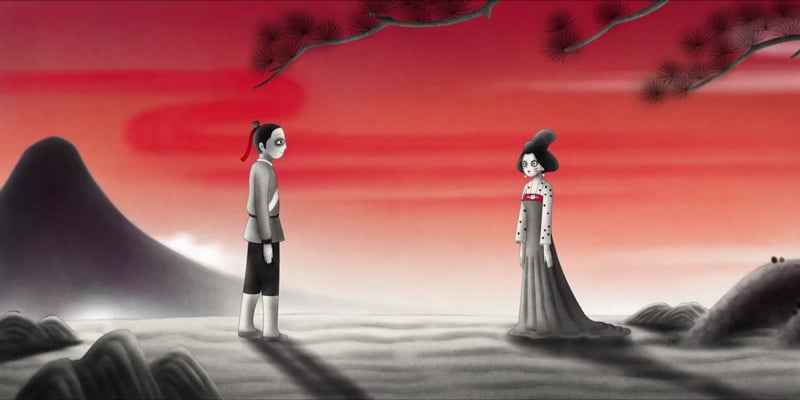 What is the connotation of this story? The director did not give a standard answer. Changing is the basic framework of the original story, in fact, any theme that makes sense to oneself is fine. The ego, the inner self, or the boundless avarice, is the wonderful point of leaving blank space. 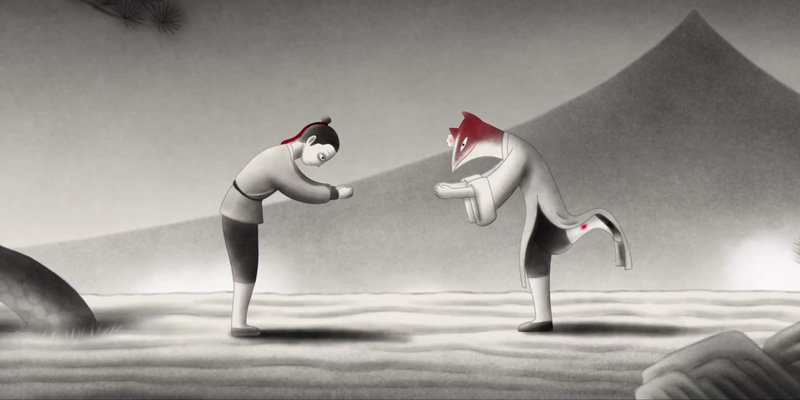 The miraculous novels of the Northern and Southern Dynasties are such a characteristic. They simply tell a story without judging or depicting psychology, giving people infinite imagination. There is also an interesting setting in the second episode. "Goose Mountain" is a silent video, which uses second-person subtitles to promote the plot and allows the audience to replace the perspective of the pedlar. It seems that we are the protagonists in the story and strengthen the emotional experience of the whole process. 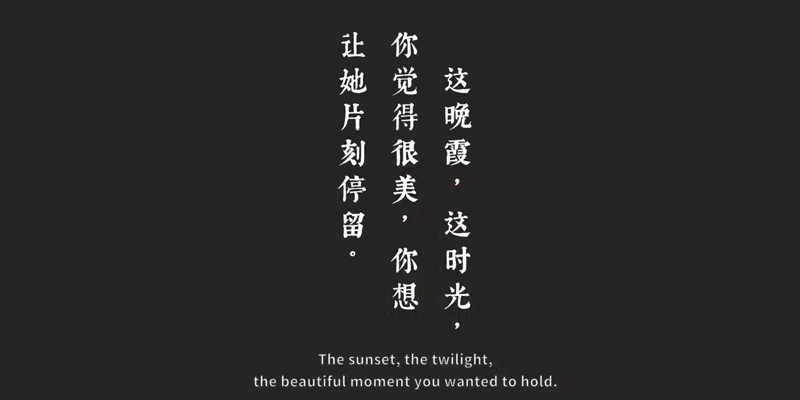 The return of aesthetics

In addition to the core of the story, the art style and production methods of "Yao-Chinese Folktales" are also worth paying attention. The background of "Nobody" is the style of ink fusion of light and shadow, drawing on the meaning of Chinese ink splashing and green landscape. 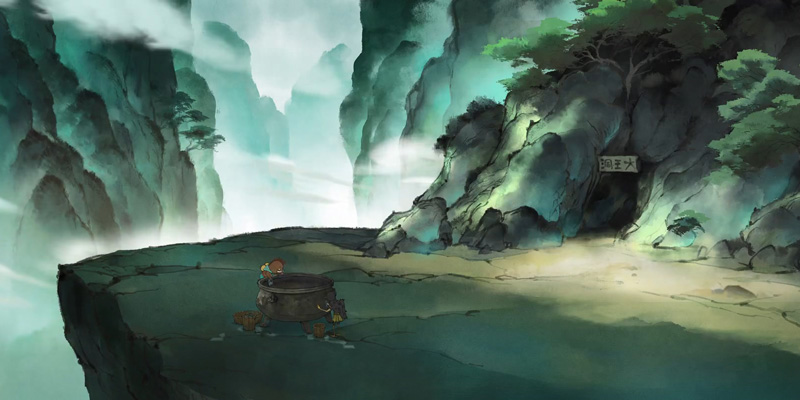 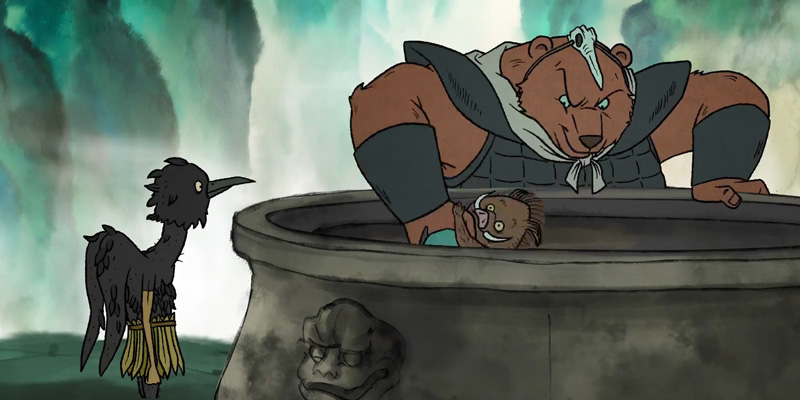 The dubbing and soundtrack of "Nobody" are also exquisite. For example, when the wild boar monster ran to Sun Wukong, there was no sound when shouting the second sentence. There was a kind of blank- leaving in the sound, which also highlighted the shocking feeling of the background musician singing.

The unique audio-visual language of Goose Mountain is even more unforgettable. Black, white, and gray plus bright red is both weird and flexible. And the characters with strong dark circles are the display of Gothic aesthetics.

Behind the advanced aesthetics is hard work. "Goose Mountain" used the most refined sketching method to restore the effect of early film. Director Hu Rui said that there is no skill to move this style, so it can only be hand-painted frame by frame. 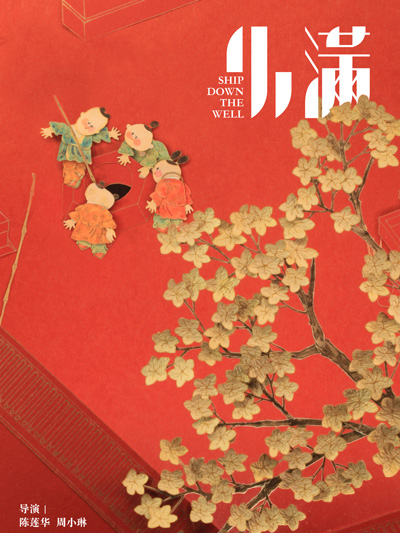 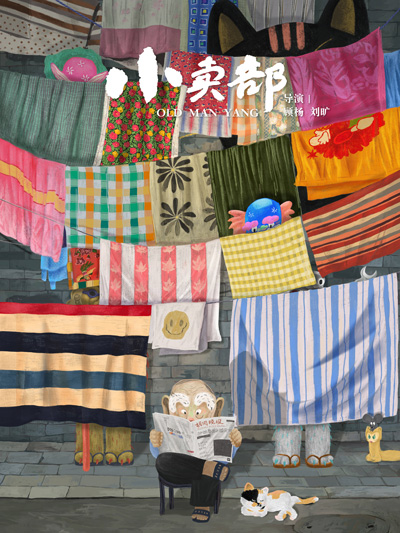 Inheritance and innovation, tradition and modernity

Shanghai Animation Film Studio, officially established in 1957, has created more than 500 works accompanied by generations of Chinese, including "Snow Kid", "Havoc in Heaven", "Black Cat Detective" and "Calabash Brothers". Unfortunately, after the 1980s, the trend of the animation market changed rapidly. Because of the development of the times and the fault of talents, the once glorious Shanghai Animation Film Studio gradually declined, and was even questioned about resting on past achievements, and there were no more classics.

In fact, there have been many excellent domestic animations in recent years. The animated film "The Legend of Hei" explores the relationship between monsters and people. The "Under One Person" takes root in the Chinese metaphysical and sets up an interesting combat system. The ink painting style of "Fog Hills of Five Elements" is unique, smooth, and gorgeous, based on tradition and into the modern.

On the contrary, the most impressive point of "Yao-Chinese Folktales" is probably the heritage and innovation of the audience. Hu Rui, the director of Goose Mountain, is a fan of Shanghai Animation Film Studio. He even claims that "Goose Mountain" can be regarded as a fan work of The "Legend of Sealed Book", and humbly adds there are big differences between the two. Hu Rui used the image of lame fox scholar in "Goose Mountain" to pay his respects to the lame fox in "The Legend Of Sealed Book". 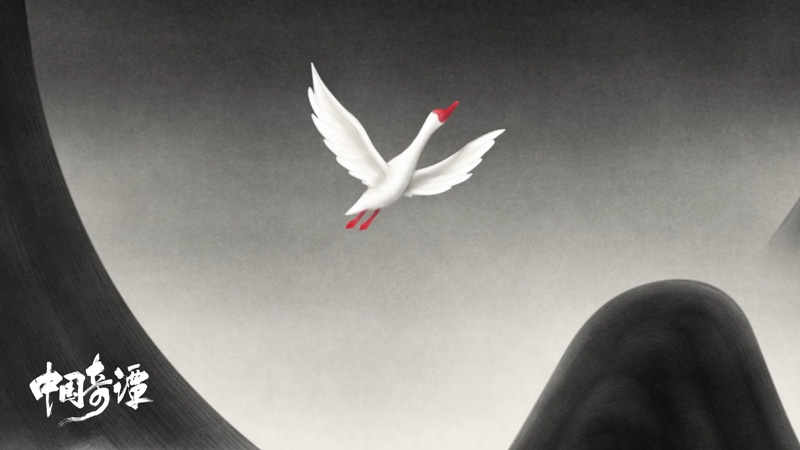 Hu Rui also mentioned that originally wanted to use voice-over narration, but finally chose a simple subtitle form. These subtitles are like the task instructions that appear in games. They are particularly in line with the basic life experience of contemporary young audiences, so there is no need to use superfluous expressions.

The innovation is more obvious. In the background of "Journey to the West", the director discusses the fate of ordinary monsters and also maps the current with the workplace relationship of the monster world. In addition, the wild boar mother who asks her child to drink more water is like a parent whose child works outside and is often concerned, which adds warmth to the story.

"Yao-Chinese Folktales" has only 8 episodes in total, and the form of this unit short film collection is more like an exploration, but seeing the breakthrough is worth celebrating. Hope that the surprise of Chinese animation is not a flash in the pan, but like running water, striving ceaselessly.