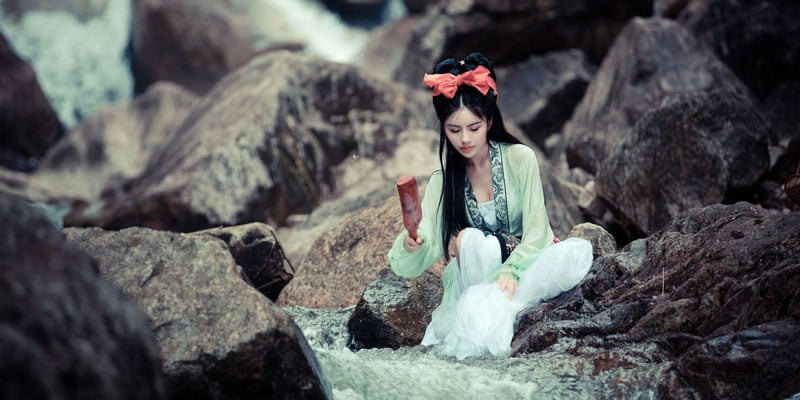 In ancient China, there was no tap water, no washing machines, and no cleaning products such as laundry detergent, so how did ancient people launder hanfu and daily care for it?

In modern life, soap is the most basic of laundry clothing. However, soap was also used as a cleaning agent to wash clothes in ancient time. Ancient soap was made from "plant ashes", which is the residue of burning plants (herbs and woody plants). It was used to make soap because it was easy to get and store. The ash contains many mineral elements, including potassium carbonate, which removes stain.

In the Book of Rites, a document reflecting the history and culture of the Zhou Dynasty, it is written that when the hatband and clothes were dirty, they were washed with plant ashes.

During the Qin Dynasty, soap was further upgraded with the addition of a substance called "shell ash". The ash produced by burning shells, when mixed with plant ashes, produces potassium hydroxide, a strong alkali. 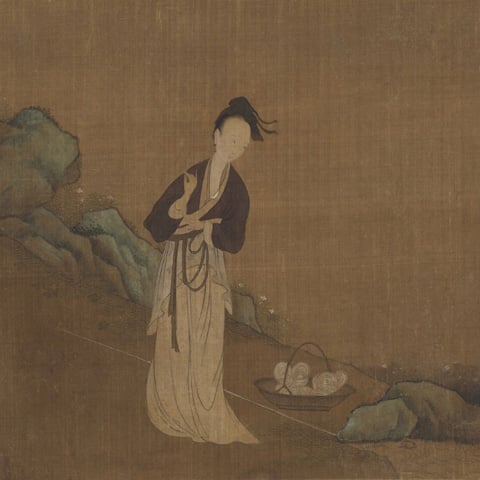 Xi Shi washing the silk yarn at the stream, painting by Zhou Wenju of Five Dynasties and Ten Kingdoms period

To make silk soft and white, the ancients soaked it in a mixture of detergent made from shell ash and plant ash. The potassium hydroxide quietly took away the grease and dirt from the surface of the silk fabric, making it as shiny as new, thus showing that the ancients were also good at using their wisdom to make up for the needs of life. 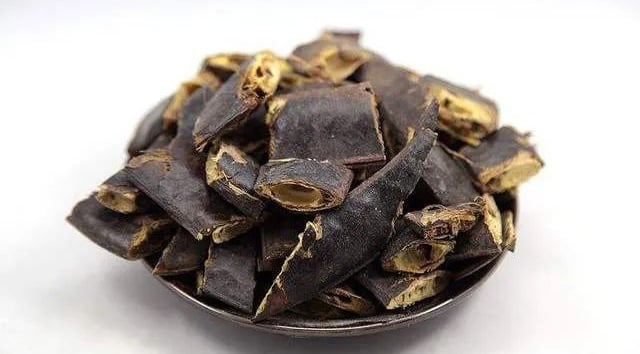 Zaojiao is rich in saponin and has a strong detergency effect. Ancient people washed their clothes by grinding Zaojiao and putting them into the water to produce a large amount of foam, and the clothes would be easy to washed clean. Most importantly, Zaojiao is easy to pick and almost every ancient household would grow a few Chinese honey locust trees.

Except for washing clothes, ancient people also used Zaojiao for bathing. According to the "Xin Xiu Ben Cao (新修本草)" of the Tang Dynasty, Zaojiao not only cures skin diseases, but also promote hair growth. The southern dynasty were the first to start the popularity of Zaojiao, and they remained a commonly used item for removing dirt until the Song and Yuan dynasties. 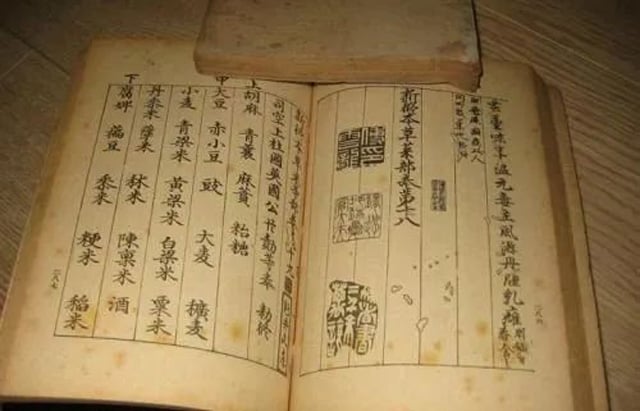 By the Tang Dynasty, an even more unbelievable type of soap had emerged: pig pancreas soap. As the name implies, this is an all-natural, handmade soap processed from the pancreas of pigs as the main ingredient. Pig pancreas is rich in active ingredients that effectively remove greasy stains and dirt.

Fresh pig pancreas, remove the grease from the outside, and the tendons from the inside. After wash clean, then dice the pancreas with a knife and chop it into fine pieces, then mix with soda ash and knead it into small pieces, and name "Zaodou (澡豆)". 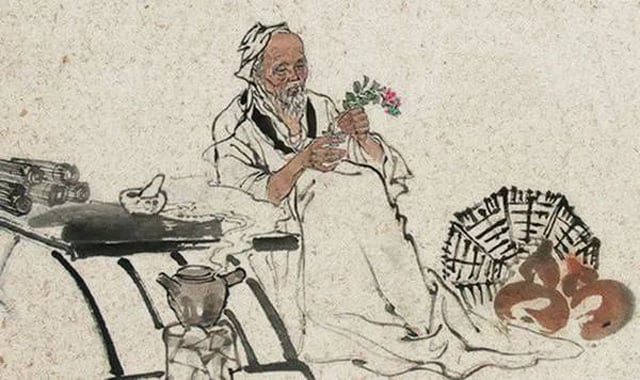 When the ancients launder hanfu, ancient put Zaodou on hands and rub it repeatedly, leaving it to produce a layer of milky foam and mucus, which would clean off the dirt on their clothes. In the Tang Dynasty, Zaodou was considered a household necessity, and were inseparable from the highest officials to the common people. Pig pancreas soap has been used for a long time and is one of the original methods to remove stains, which was slowly abandoned when industrially produced soap emerged.

Continuing the trend of the Tang Dynasty, Zaodou were widely used in the Song Dynasty. At the same time, a new type of soap became popular, the "Feizaotuan (肥皂团)".

The process of making Feizaotuan is more complex and elaborate than the previous soap: processed the natural Zaojiao into a powder, then mixed with spices and then made into balls with size of oranges. Yang Shiying of the Song dynasty recorded the recipe in his "Ren Zhai Zhi Zhi (仁斋直指)", which involved nearly 20 types of spices and herbs. 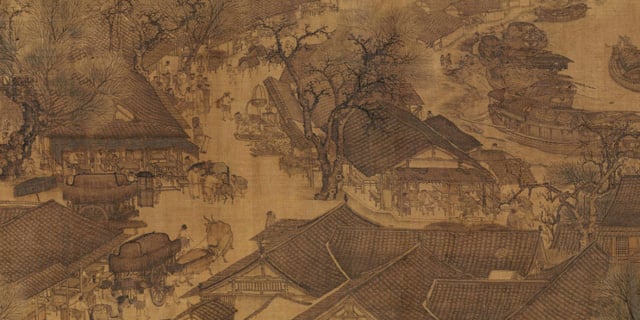 Along the River During the Qingming Festival, Song dynasty, Zhang Zeduan

Feizaotuan not only leaves clothes silky smooth and pleasantly scented. In the "Compendium of Materia Medica", Li Shizhen recorded, "Pick the pods in October, boil and pound them, and make soap with white flour and incense, bathe the body and face, remove dirt and grease, better than Zaojiao."

During the Ming and Qing dynasties, soap followed a recipe invented during the Song dynasty before modern soap was introduced into China. The use of soap is mentioned in many literary works of the period.

In the twenty-seventh chapter of The Golden Lotus, Ximen Qing says to Meng Yulou, "I'm waiting for the maid to fetch the jasmine soap for me to wash my face." The jasmine soap here is a specially made soap. The white color and fragrance of jasmine make it a great soap for bathing and skin rejuvenation, as well as for laundry. 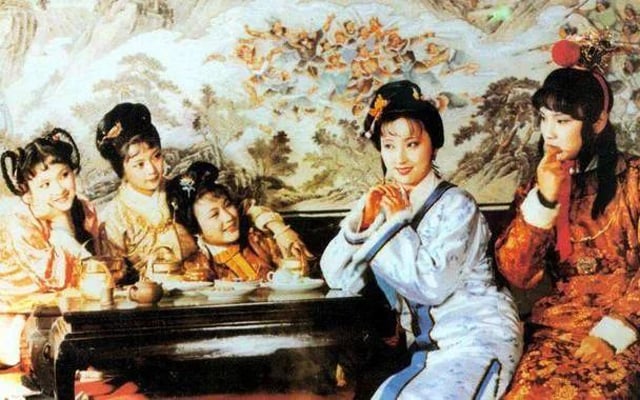 Drama Dream of the Red Chamber

In the thirty-eighth chapter of "Dream of the Red Chamber", the women of the House of Jia enjoy the osmanthus flowers and eat crabs, Wang Xifeng ordered the maids to take "osmanthus pistil Lü Dou Mian Zi, to prepare wash hands", and the "Lü Dou Mian Zi" is a continuation of Zaodou in the Ming Dynasty.

Late Qing dynasty court documents clearly record that the imperial physicians elaborated a unique medicinal soap based on the theories of Chinese medicine. They added the amount of herbal ingredients to the raw materials used in soap production, and the soap not only an aromatic scent, but also an enhanced ability to remove dirt.

Li Bai once wrote in his ancient poem “Song of Wu at Midnight”, the moonlight enveloped the entire city of Chang'an, and the sound of pounding clothing (捣衣) was heard from every house, like a ensemble rising. The women looked out the winds sweeping down the wilderness and wondered in silence when their husbands would be able to vanquish the enemy, end their distant campaigns and return home in peace. 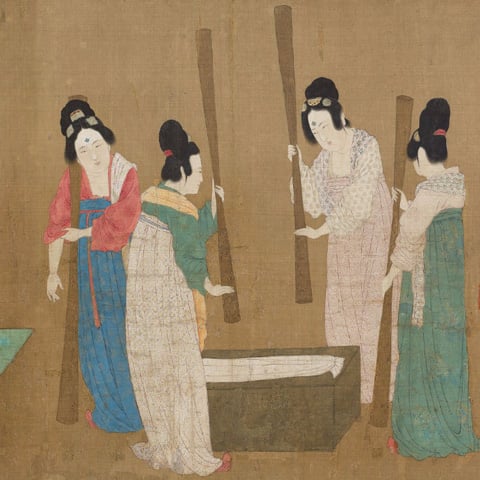 The sound of pounding clothes that appears in this poem refers to the sound made by ancient people when washing clothes, pounding clothes with a wooden pestle (Daoyichu, 捣衣杵), which is a laundry tool commonly used in ancient times, a common washing tool used in ancient times. Ancient people would put the clothes on a smooth stone and then tap them with a wooden stick. With the powerful rush of water, the dirt is brought out of the clothes. Pounding clothing was particularly common during the Tang Dynasty, especially in the middle and late Tang Dynasty, when wars were constantly raging. 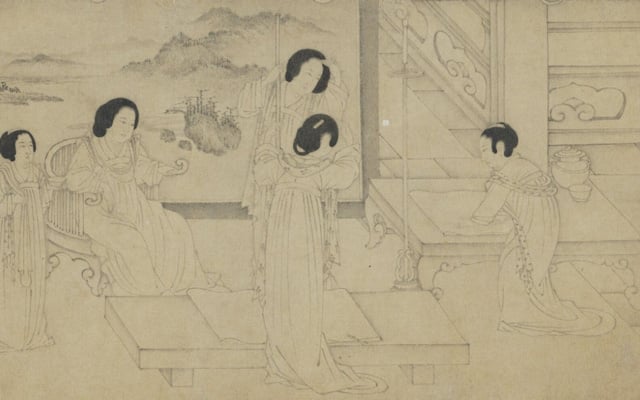 The earliest record of ironing can be traced back to the late Shang Dynasty. Before the ancients ironed their clothes, they put burning charcoal inside the iron and used the heat and weight of the metal to iron out the creases in their clothes. 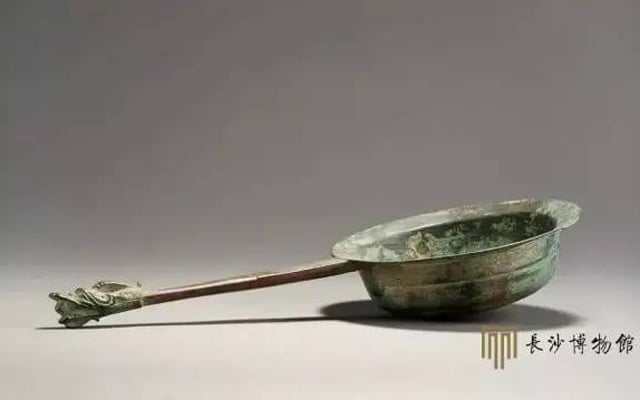 The earliest examples of irons could be traced back to the Western Han period, when most of the irons excavated from Han tombs were cast in bronze, with a rounded belly, wide mouth rim, and long handles, some of which were decorated with dragon motifs at the end. These irons were beautifully crafted, made of precious materials, and intricately carved. Ancient people's pursuit of exquisite life is no less than modern people.

Zhang Xuan's "Court Ladies Preparing Newly Woven Silk" visually recreates the scene of a woman ironing clothes during the Tang dynasty: two women hold one end of the silk in each hand, while another woman, holding an ancient iron in her right hand, concentrating on ironing back and forth on the silk. 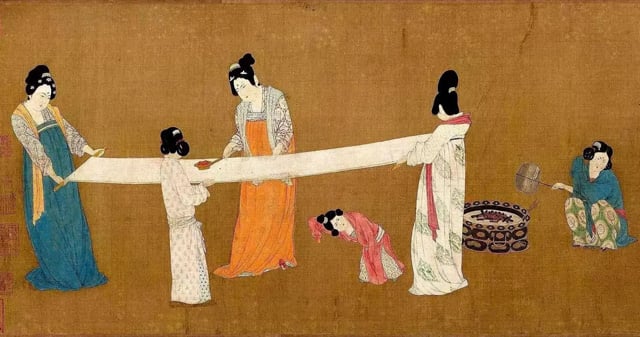 In the Song Dynasty, the ancient people were no longer satisfied with just ironing their clothes, they also invented smoky clothes. Pour hot water into a special incense dish, then put an incense burner, buckle on the smoker, and spread the clothes on the cage, the fragrance will be able to diffuse in the clothes. When worn, the fragrance lingers.

Whether it was washing or caring, the methods used by the ancients were full of wisdom. Perhaps it is the love of life that has remained constant throughout the ages.

What about your tips for launder hanfu?

Creative License: The article is the author original, udner (CC BY-NC-SA 4.0) Copyright License. Share & Quote this post or content, please Add Link to this Post URL in your page. Respect the original work is the best support for the creator, thank you!
Hanfu Wash
Related

The Most Complete Guide to Washing Hanfu in Summer 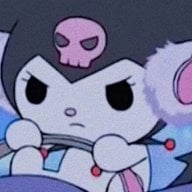