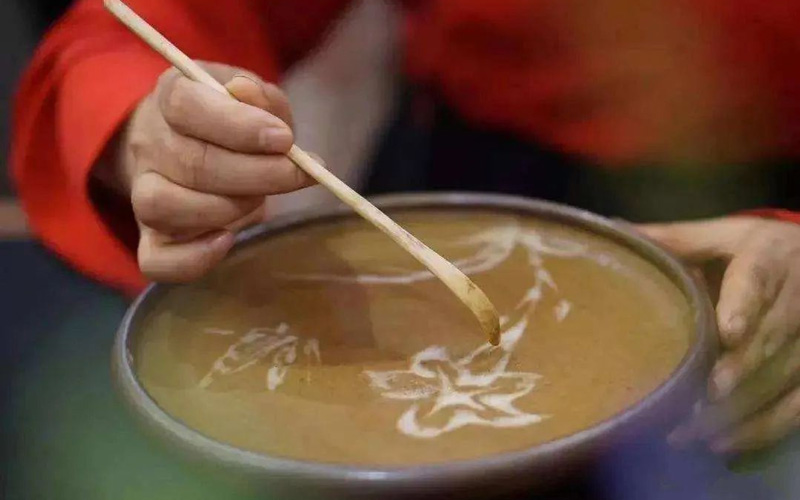 China has a long history of tea drinking, which emerged in the Tang Dynasty and became prosperous in the Song Dynasty. It is in this context that the story of A Dream of Splendor takes place.

Dian Cha (点茶, whisking tea), as an important part of Chinese tea culture, is the main tea drinking method in the Song Dynasty, and also an important way of leisure and entertainment for the literati and ordinary people.

Cha Bai Xi (茶百戏, tea painting art), also known as: Fen Cha (分茶), Shui Dan Qin (水丹青). Firstly, the finely ground tea powder is injected into the tea bowl with boiling water, while stirring with a tea whisk, the tea froth floats up and forms a suspension. Then use the teaspoon and water to draw words and patterns on the surface.

Cha Bai Xi originated in the Tang Dynasty, and developed to the peak in the Song Dynasty, becoming a cultural activity revered among the literati. Cha Bai Xi is a prominent representative of Dian Cha, led tea-drinking raised to an art.

The Difference between Chinese Tea Painting Art and Latte Art 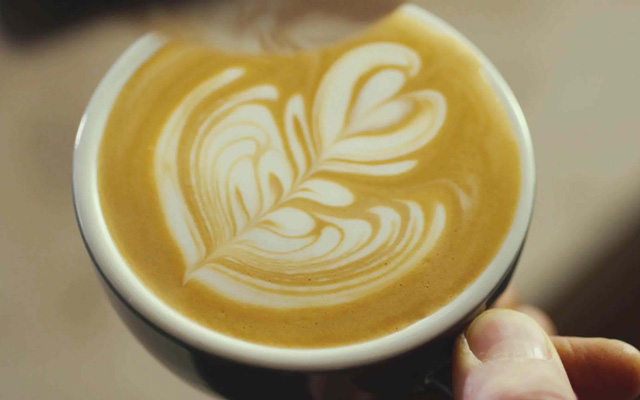 If you watch the making of traditional tea painting art for the first time, you may associate it with the latte art of coffee. They are indeed very similar, but there are some differences.

Dian Cha, Fen Xiang, Cha Hua, Gua Hua. Dian Cha was the first of the "Si Yi (四艺, four arts)" of the Song Dynasty. But as the Dian Cha is no longer prevalent, Cha Bai Xi gradually declined after the Ming Dynasty. In modern times, it has almost been lost. 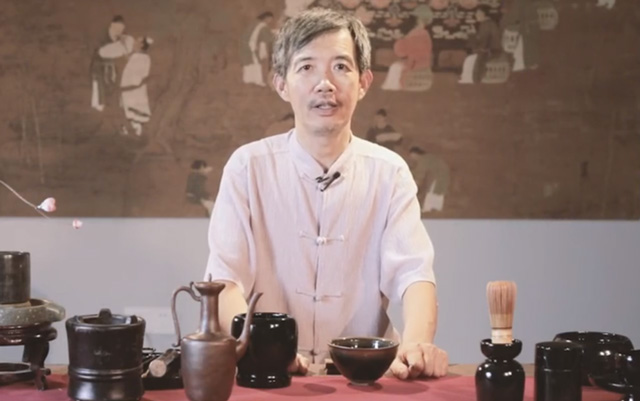 In 1983, Zhang Zhifeng, who was studying tea at Fujian Agricultural College, accidentally access to a piece of literature on the Cha Bai Xi. This ancient and magical skill immediately inspired his heart to explore.

After graduation, Zhang Zhifeng began the difficult journey of exploring tea painting art. He consulted a large number of ancient books and materials, and conducted hundreds of experiments, including the selection of hundreds of tea tree varieties, the processing of various tea raw materials tea cakes, and the restoration of various ancient methods. 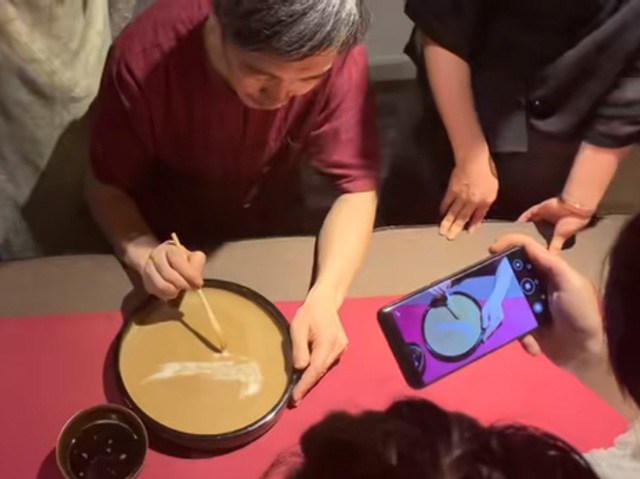 Through a large number of rigorous experiments, he finally found that a quick whisk can make the tea form a delicate and stable foam, which is the key to painting on tea. In order to make the pattern keep longer, he continued to try and perfect it, from the earliest few minutes, until today's 15 minutes, and can even last 20 minutes.

After more than 20 years of unremitting exploration, in 2009, Zhang Zhifeng finally complete the recovery of the traditional tea painting art. In 2017, Cha Bai Xi was listed as an intangible cultural heritage of Fujian Province. Zhang Zhifeng, became the only representative successor. 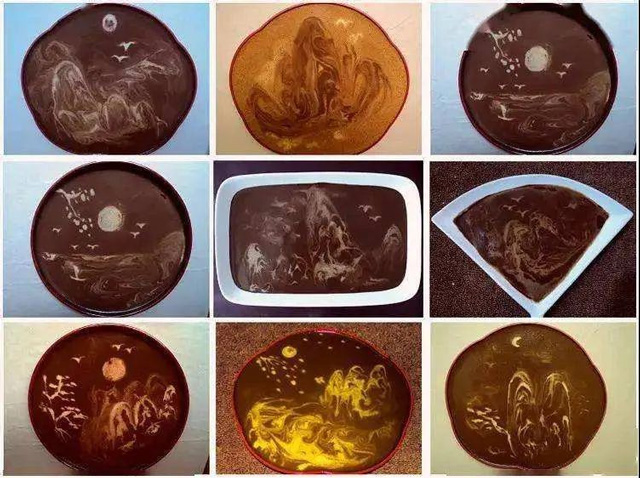 The process of making tea painting art is very complicated and the maker needs not only the foundation of whisking tea, but also some drawing skills. A complete set of tea painting art goes through more than a dozen processes.

The following shows part of the process of making tea painting art by Zhang Zhifeng.

1. Drying the water in the tea cake with a gentle fire and releasing the aroma of the tea.

2. Grind the tea into powder.

3. Sieve out the fine tea powder.

4. Waiting for the water to boil.

6. Whisk to create a dense and long-lasting foam.

7. Paint the tea surface with water, transforming it into various patterns.

In the scene of the tea contest between Zhao Pan'er and the bosses of the tea soup lane in A Dream of Splendor, this is interpreted in detail and gives us a visual cognition of the life of the Song people. 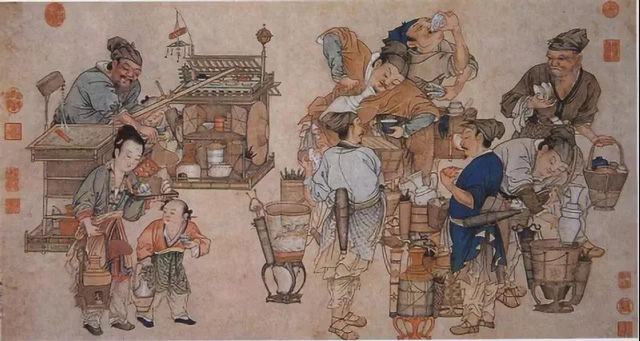 In the tea skill contest, the winner is mainly determined by the tea color, watermarks, and tea taste.

During whisking tea, a high frequency of stirring is required to produce a large amount of fine foam. The foam's color and stability is the contest's first element.

The watermark, as an important sign of the stability of the foam, is the second element of the contest, and the first to reveal the watermark is negative. And the taste of tea, is the third factor determining who is the winner.

The tea used in the whisking tea is the traditional tea block, which is more cottony and smooth in taste, and the stability of the suspension of tea is stronger, which is suitable for expressing various Chinese painting scenes. 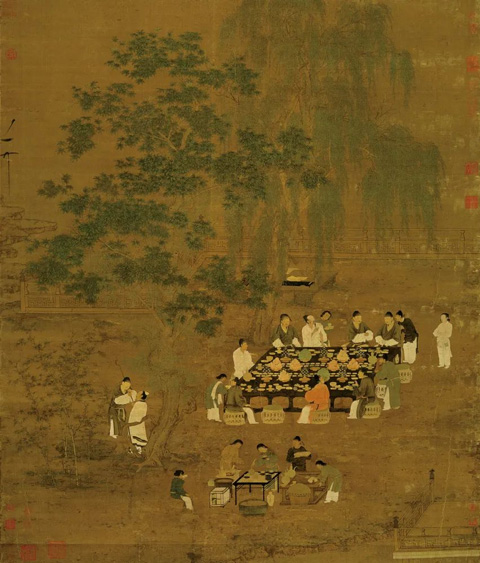 In the Song Dynasty, many famous people are tea skill contest lovers.

Emperor Huizong of Song, not only love calligraphy and painting, but was also addicted to whisking tea, and often hosted banquets in the palace, to contest tea skills with ministers. 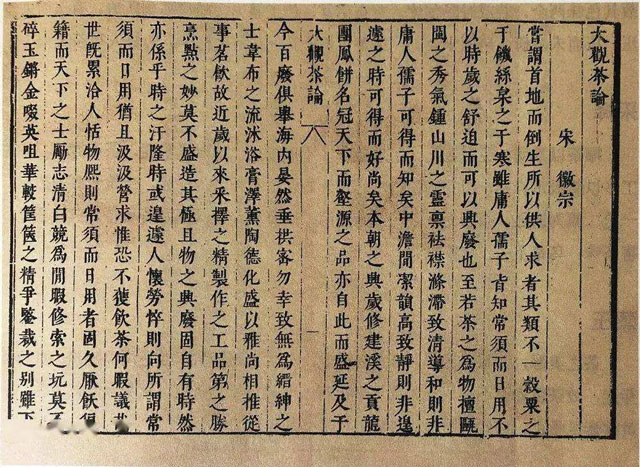 The "tea forest interesting record" recorded a story about the Song Huizong. Once, an old man came into the palace to compete tea skills with him, Song Huizong was very happy, and used the best tea in the palace to make, but he lost. After questioning, Song Huizong learned that the elder used the 300-year-old tea treasured in the temple, Huizong lost the contest convinced. 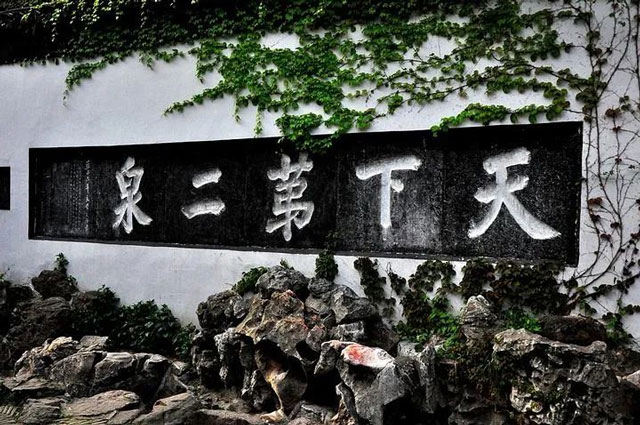 The great literary Su Shi was also an enthusiastic lover of tea skill contests, he was twice visited Mount Hui "Second-best Spring under Heaven" twice to taste tea. During one of his trips, he met the famous tea scholar of the Song Dynasty, Cai Xiang, and had two tea contests with him.

The first time, the foam in Cai Xiang's tea bowl is like snowflakes, while the foam in Su Shi's bowl has subsided, the victory is clear. Dongpo did not concede, knowing that the tea was not as good as Cai Xiang. After two days of research, he invited a new contest with Cai Xiang. Su Shi replaced the water, relying on the tea containing bamboo taste to win. 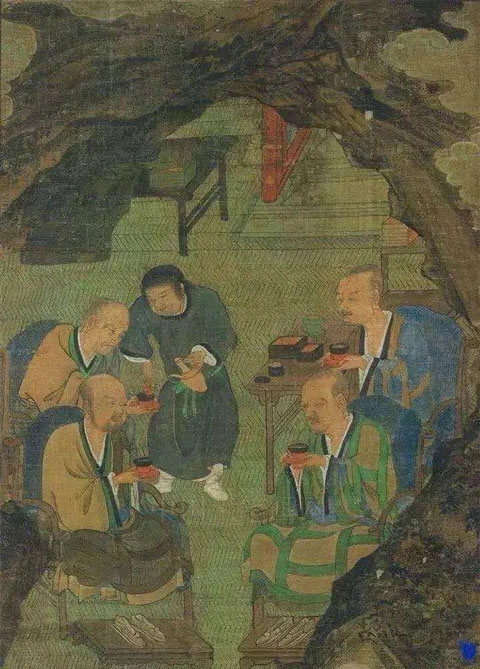 To this day, the steps to drink a cup of tea have become simple, but at the same time, we may have lost the process of savoring the flavor of the tea.