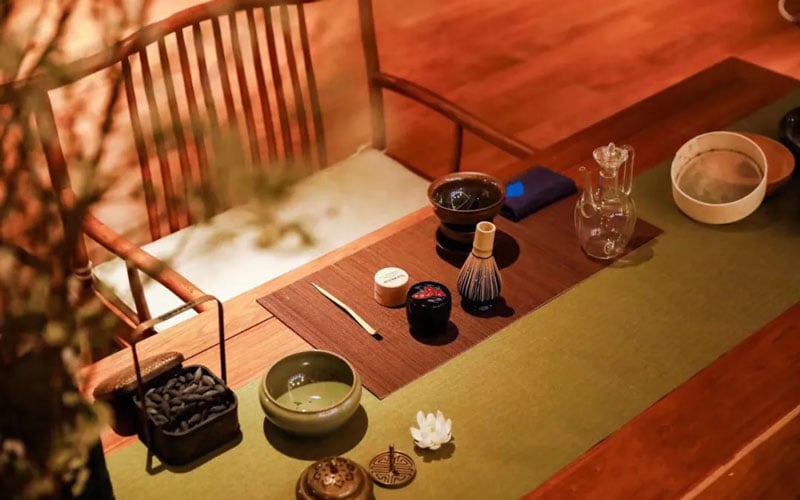 The traditional Dian Cha (点茶, whisking tea) in the Song Dynasty had an extremely important position in the history of the Chinese tea ceremony. 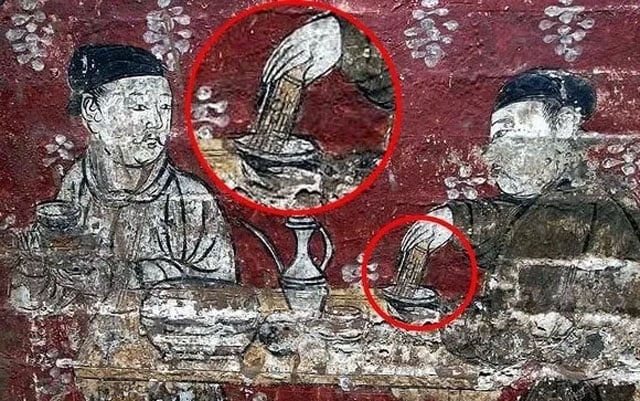 Chinese tea culture has a long history, the earliest written record is: "Shennong tasted hundred herbs, the day encountered seventy-two poisons, and got the Tu (荼) and solve", where the "Tu" is tea. Tea (茶) in the history of the five had used the name: Tu (荼), Jia (槚), She (蔎), Ming (茗), Chuan (荈).

In five thousand years of Chinese civilization, people have accumulated a deep tea culture. In history, the application process of tea is roughly medicinal, edible, drinking. 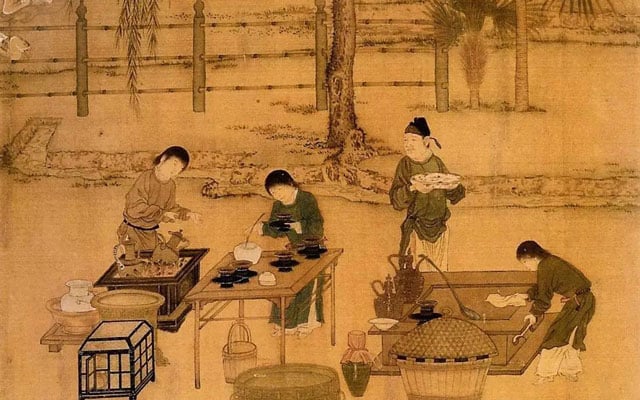 The Song Dynasty was the pinnacle of aesthetics in Chinese history, when the economy was developed and people had high demands on the aesthetics of life, focusing on simplicity, chic, and elegance.

Song people pursued elegant life, from the emperor to the people, they all advocated Si Yi (四艺, four arts), namely: Dian Cha, Fen Xiang (焚香, burning incense), Cha Hua (插花, flower arrangement), Gua Hua (挂画, hanging paintings). Not only enriched the life of the Song dynasty, but also inspired the literati, leaving behind many works of art about it. 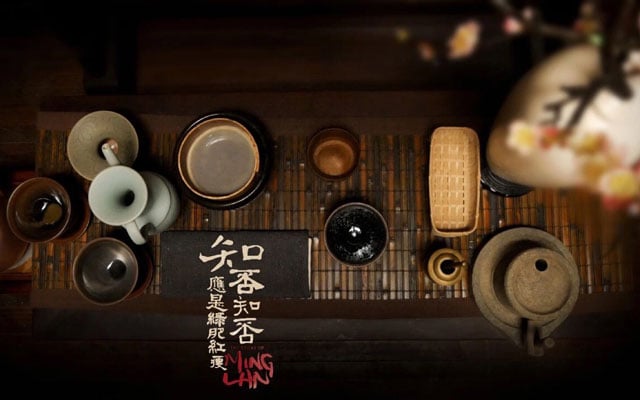 Whether it is this year's popular Chinese drama "Palace of Devotion", or the once popular "The Story of Minglan", "Serenade of Peaceful Joy", these dramas inadvertently show the elegant aesthetics of life in the Song Dynasty to the fullest, but also let the Song Dynasty's original whisking tea is known to the public.

In history, there was a big fan of whisking tea: Emperor Huizong of Song. He studied the tea ceremony, and was so accomplished that he wrote the "Da Guan Tea Lun" on the tea ceremony, created the "Qi Tang Dian Cha Fa", making a great contribution to the development of tea culture in the Song Dynasty. 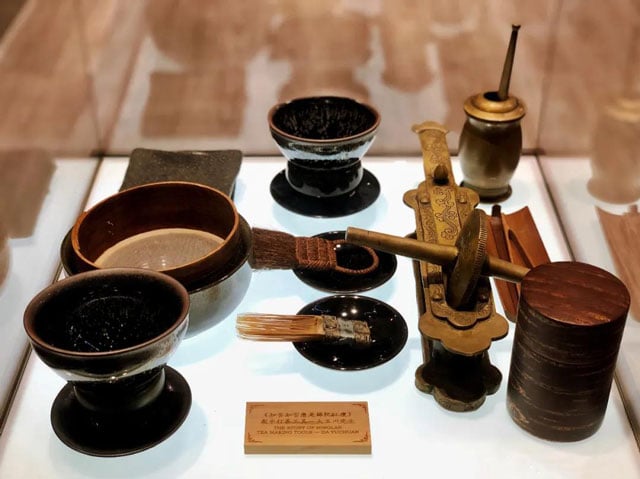 What are the specific steps of whisking tea?

Let's start with the production of tea in the Song Dynasty.

After the tea leaves were picked, they were not directly roasted for use, but went through a series of complicated processes to make tea cakes, which was "Tuan Cha (团茶)". After the "Tuan Cha" is made, it should be stored in Cha Bei Long (茶焙笼). 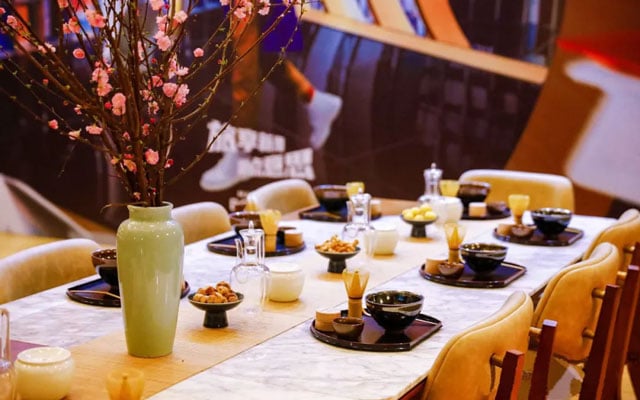 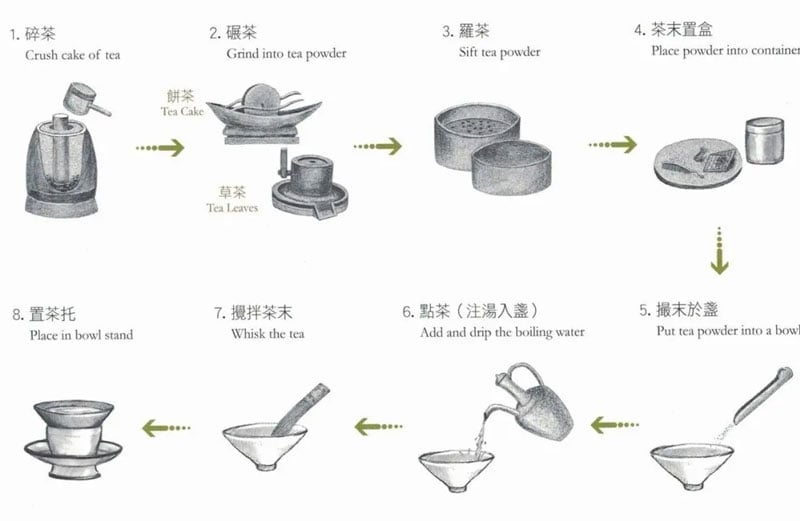 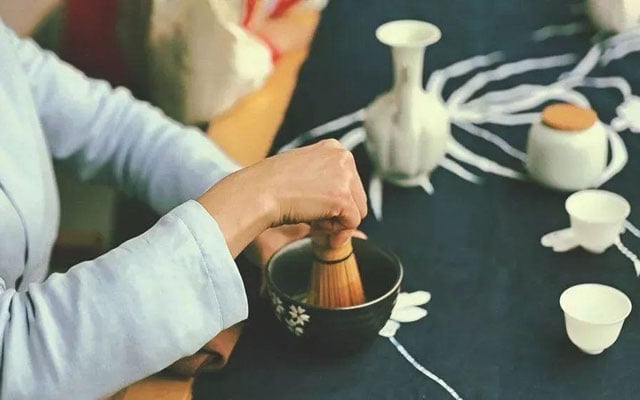 A fragrant Song-style hot tea is finished. This whole process, the Song people called "whisking tea". After whisking tea, the tea soup will be divided into jangs, for people to drink, and the Mo Bo of each tea soup to be even.

The first time of water adding should surround the wall of the Cha Zhan to keep the water from soaking into the tea paste. Stirring the tea paste first, gradually increasing the amplitude of the whisk, the fingers and wrist circling back and forth together, make the tea goes up and down thoroughly, producing a bright and distinct Mo Bo. 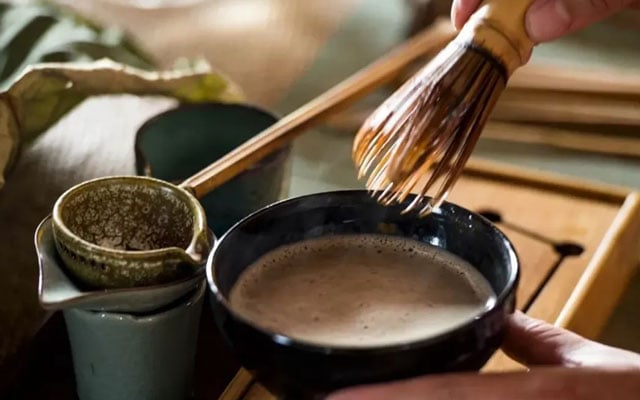 The second to the sixth time of water injection, the action looks quite similar, but in fact, it is completely different, each time the location of the water added, the amount of water added and the force of the whisk rotation are each exquisite.

For the seventh time, the focus is on the lightness and clarity of the tea and the thinness and density of the Mo Bo.

It means that the surface of the tea soup appears as rich and milky foam as snowflakes, which is the highest level pursued by the whisking tea experts. 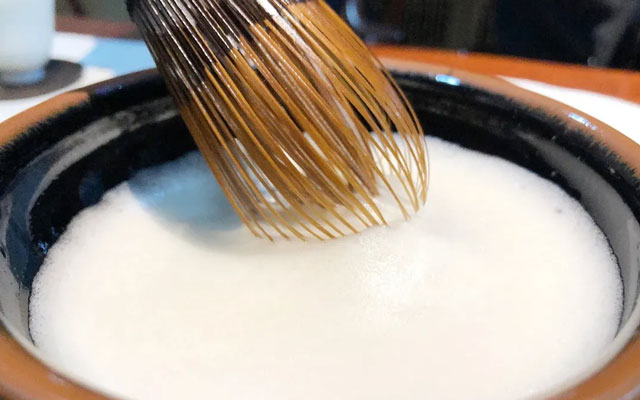 There are even skillful people who paint on the "Xue Mo Ru Hua", which is a test of whisking tea people's skills, and it takes years and years of continuous accumulation to achieve the "perfect painting" on tea. 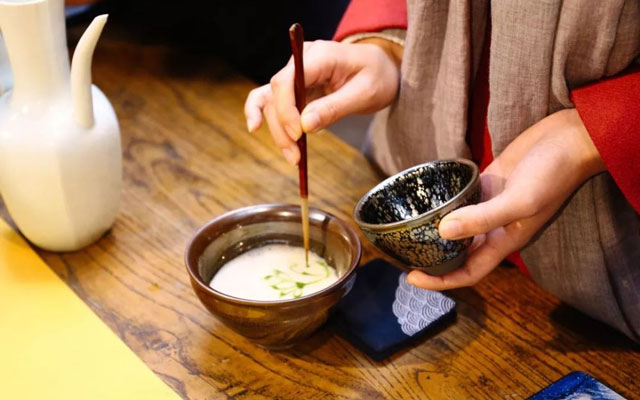 A video about the introduction to whisking tea:

If you have the chance, it must be a special pleasure to put on Hanfu or traditional costumes and experience Song Dynasty Dian Cha.