During the Ming dynasty, the categories and styles of gold and silver ornaments had greater innovation and development based on the Song and Yuan dynasties, showing different visual aesthetic experiences and artistic styles.

Among the various types of gold and silver in the Ming dynasty ornaments, "San Sher (三事儿, sān shèr, three things)" is a unique example. 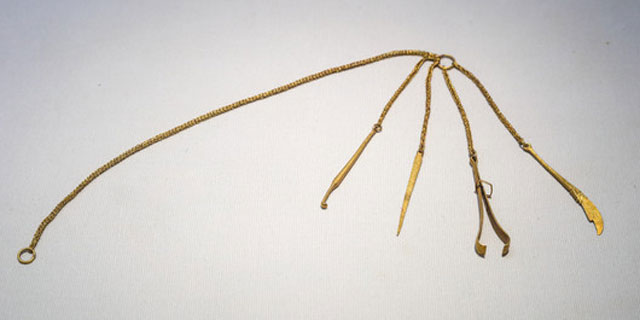 Unlike other ornaments, the "San Sher" are daily life tools, used for repairing and cleaning, and their main components include hooks, chains, connectors, pendants, etc.

Some of them also have storage tubes, and the pendant objects are usually toothpicks, ear picks, and tweezers, which can be worn by both men and women.

The "San Sher" is a common name in the Ming Dynasty, but in fact, the number of pendants can be increased or decreased, and the types are also different.

The Ming Dynasty gold and silver "San Sher" are exquisite and unique, reflecting the high design aesthetic appeal, and also have a rich cultural connotation.

01 Small and applicable: the form of pendant design

The gold and silver "San Sher" of the Ming Dynasty pursued unity in form, and the pendant was mainly a toothpicks, ear picks and tweezers, among which the combination of toothpicks and ear picks was the most common.

The overall shape of these pendants is long, and the lengths of the pendants are basically the same in actual design. 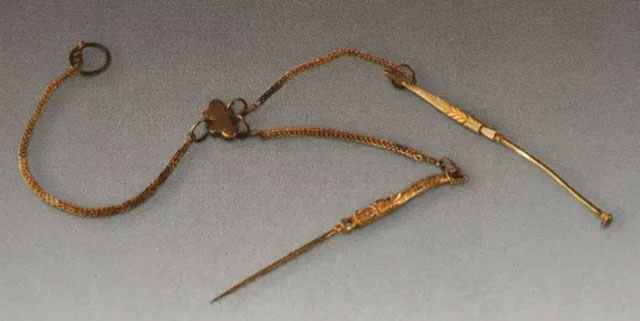 In addition to the relative uniformity of the overall length, the length and shape of the shank of the toothpicks and ear picks are also consistent.

This is not only visually more in line with people's aesthetic habits, but also convenient for storage and organization.

The gold and silver "San Sher" of the Ming Dynasty also have a high degree of "applicability", which is particularly evident in their size design.

For example, the size of the toothpicks and the ear picks is usually between 45-70mm, and the "San Sher" are generally used by the user personally, i.e. they do not need to be completed by other people's auxiliary behavior when repairing and cleaning. 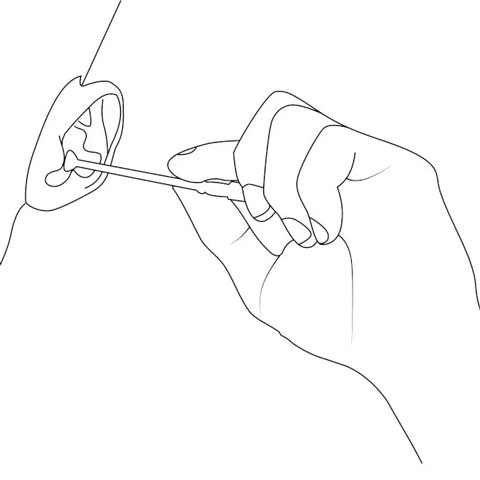 The design of the pendant form of the Ming dynasty "San Sher" not only can meet the basic functional requirements, but also comfortable and safe to use, this kind of "comfort" and "applicable beauty" design pursuit of the use of objects can not be the same as the modern design of systematic planning, precise calculation, but the design spirit of both is consistent.

02 Reasonable: the way of connecting and combining the components 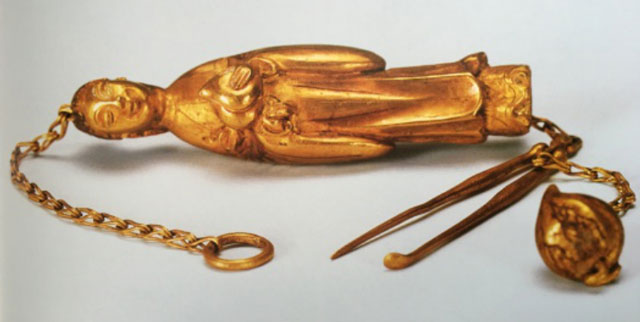 The "San Sher" are connected in a more free and diverse way.

The first is the integrated design. For example, the relics excavated from the tomb of Wang Shiqi in Linhai, Zhejiang. 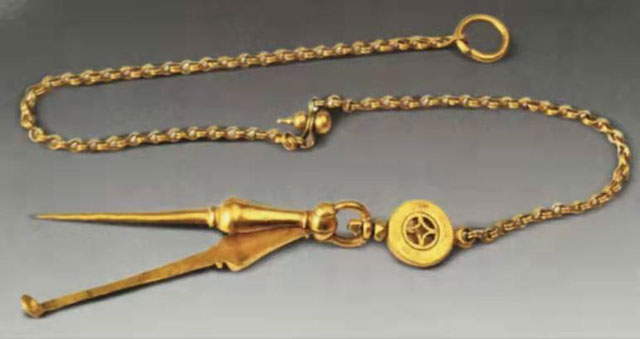 The second is the clever design of the "San Sher" connector.

"San Sher" usually has connectors in the middle of the chain, such as gourd-shaped, butterfly-shaped, ancient money-shaped, etc., both for decorative purposes, but also to divide "San Sher" into two components of the upper and lower, the level is more rich. 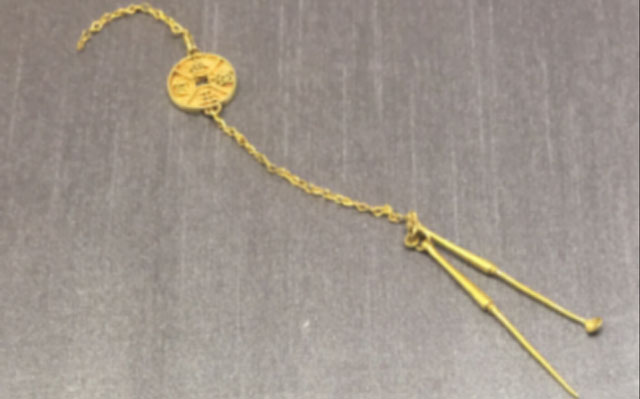 In short, the connection of "San Sher" seems to be ordinary, but there is a hidden ingenuity, and it is a piece in the hand that not only allows the user to experience the sensory pleasure of function, but also can withstand repeated play.

And also reflects the design characteristics of the Ming Dynasty gold and silver "San Sher" to pursue individual colors and meet individual needs. 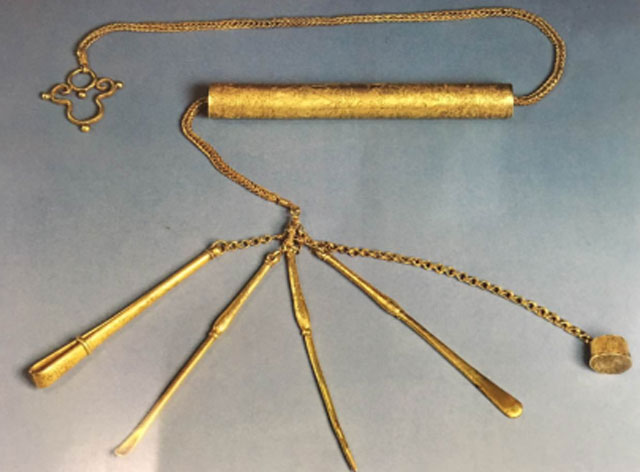 For example, the gold Si Sher (四事儿, four things) excavated from the tomb of Mu Rui in Nanjing, in addition to the three common tools, but also a flat round rod, the excavation report called it "snuff stick", this small round rod should be customized according to the special needs of the user.

The pattern on its storage cylinder, two men in robes between the landscape, with a delicate and soft layout, showing the desire for a relaxed and elegant life.

The emergence of gold and silver "San Sher" in the Ming Dynasty is closely related to the popularity of "Yin Sher (银事儿, silver ornaments)" in the Yuan Dynasty. 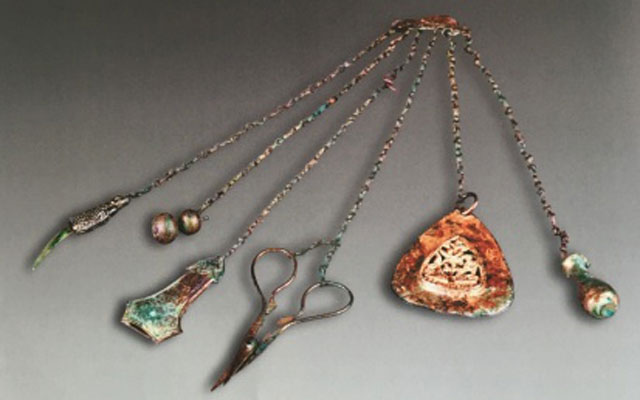 The Yuan dynasty was a feudal dynasty established by the Mongols, and dress customs were influenced by nomadic culture. The predecessor of Yin Sher in the Yuan dynasty can be traced back to the Diexie belt ornament.

Compared with Diexie belt, the Yuan Dynasty "Yin Sher" in the wearing style and pendant types have been changed, but still has a more distinctive nomadic characteristic, such as Jie Zhui (解锥, unknotting tools), knife and other things that nomads always carry tools. 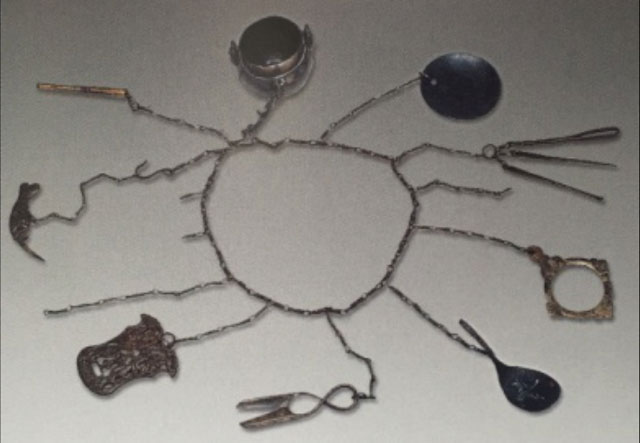 Such tools can be used for self-defense, for example, to prevent attacks by wild animals, the second can also be used for emergency purposes when dining, stationed.

Yuan Dynasty "Yin Sher" can be divided into women's wear and men's wear two, the same shape, but the pendant objects are different, the former generally include powder box,He Bao (荷包), scissors, gallows, gourd bottle, tweezers, etc., the latter will generally be replaced women's makeup by knife, cone and other things. 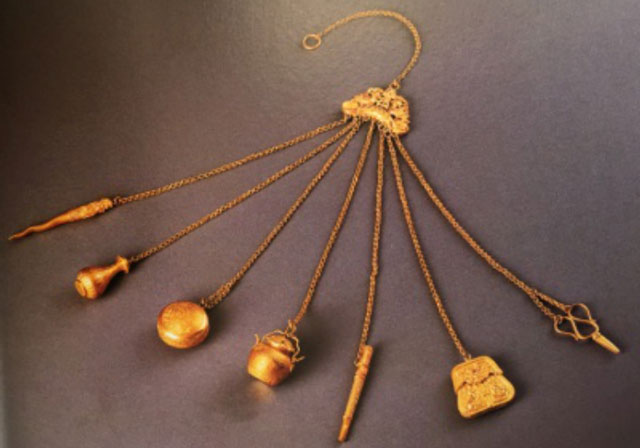 In fact, the Yuan Dynasty "Yin Sher" in the Ming Dynasty has gradually developed in both practical and decorative directions, has basically disappeared scissors, knives, and other small tools for life, replaced by toothpicks, ear picks and tweezers are reserved. Because of the small size of the objects, it is also more convenient to carry around.

Although there are similarities between the Ming Dynasty gold and silver "San Sher" and Yuan Dynasty "Yin Sher" in terms of design concepts and methods, the former has gradually abandoned the original nomadic cultural factors and turned into a design that is closer to the needs of the local public's daily life, which can be seen in the collision and integration of nomadic and farming cultures, the formation and changes of the localized design style of Ming Dynasty artifacts.

"San Sher" daily mostly hung to the corner of the handkerchief, tucked in the sleeves of clothes, carried with them, the same for men and women. 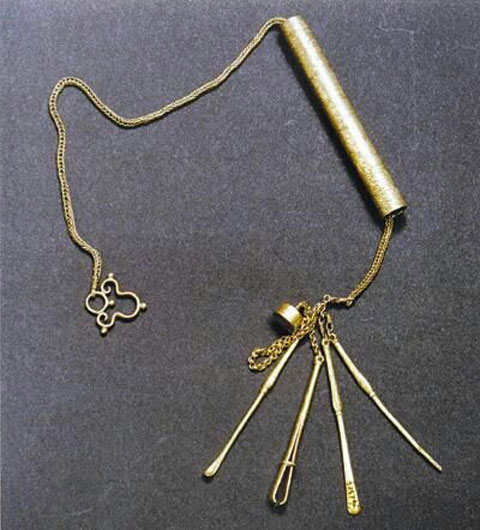 When not in use, it is hidden in the sleeve, but when it is used daily or revealed inadvertently, it shows the user's attention to quality of life and details.

In a way, they were the invisible manifestation of the exquisite life of the emperor and the rich and noble class, as well as a showcase of wealth and status. 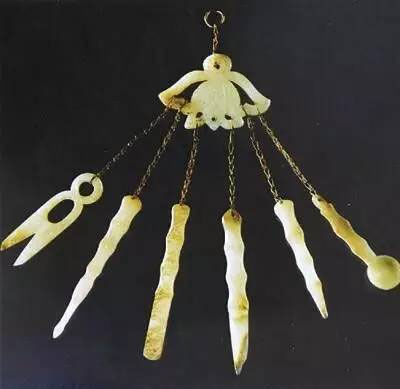 It is worth mentioning that the style of "beauty" of men in the Ming Dynasty, since ancient times, face and makeup is not the exclusive business of women, and so was the Ming Dynasty, which should also be the reason for the existence of tweezers in the three things.

Ming Dynasty gold and silver "San Sher" precisely to meet the upper class people's pursuit of exquisite life, but also to meet their wealth and status of the show-off heart should be born, become a special landscape of the society at that time.

03 Aesthetic style of gold and jade

Currently found in the Ming Dynasty ornaments "San Sher" to the majority of gold, some of the gold "San Sher" and jade, jewelry combined.

Inlaid with jade inlay treasure, is the more common method of gold and silver jewelry in the Ming Dynasty, is also the most luxurious decorative methods, which may be about the identity and financial factors, but more reflective of the society at the time to admire gold and jade, jewelry aesthetic style. 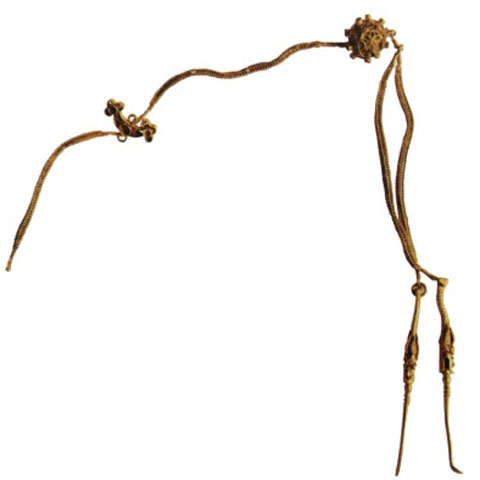 Although the rulers of the Ming Dynasty formulated a strict dress level decree, but the ban often does not really work, especially in the late Ming Dynasty, social luxury prevailed, the dress system was broken, illegal use of clothing has become commonplace.

Although the gold and silver "San Sher" objects are small, they are a reflection of the design of everyday objects and social life in the Ming Dynasty.

The design of "San Sher" is based on the needs of daily life, the pendant form is small and neat, the connection is reasonable, the style is seen in the smallest details, and it has high applicability, and pays attention to the universality and difference of needs.

As a carrier of Ming Dynasty design culture, gold and silver "San Sher" reflects the trajectory of the formation and changes of localized design styles in the process of national integration, and at the same time, it is an implicit manifestation of the pursuit of exquisite life of the emperor and the rich and noble class, as well as a microcosmic reflection of the aesthetic style of Ming Dynasty society in favor of gold, jade, and precious stones.