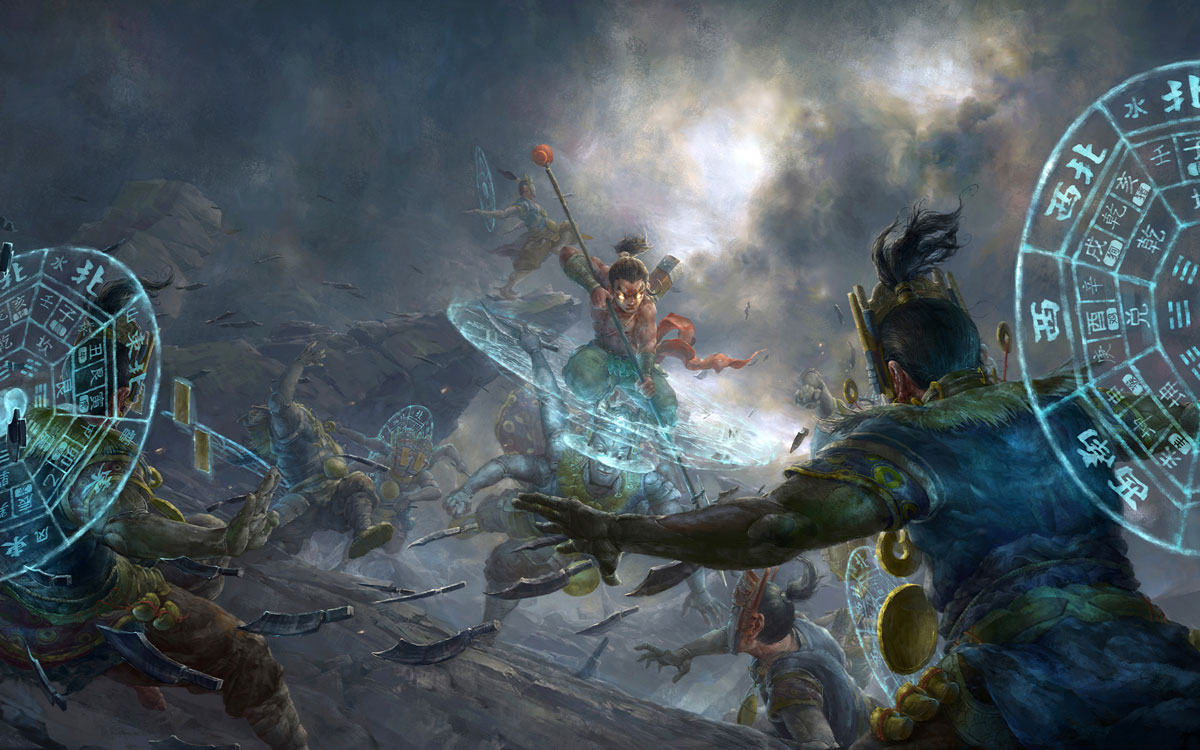 Serious eyes and magnificent scenes make the audience seem to be able to be in the painting. Each painting is powerful and has an impressive presence, and the oriental fantasy narrative is integrated into the painting, which makes people excited. 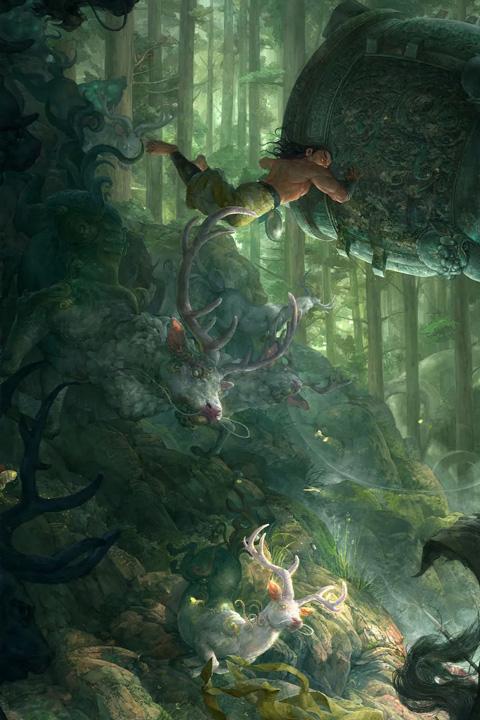 Xiang Yu, the overlord of Western Chu with soaring aspirations. 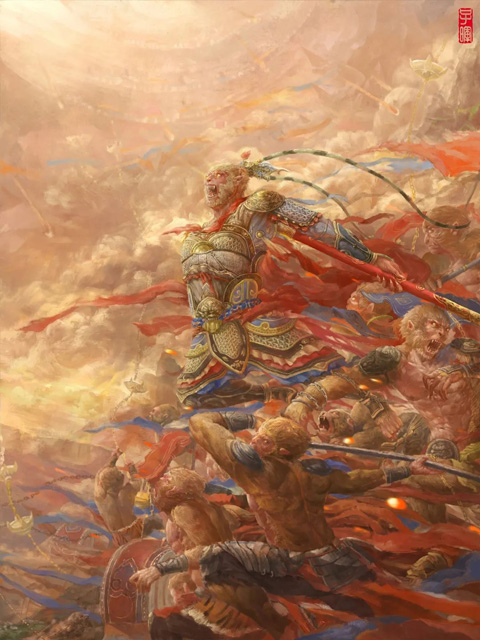 The unruly and uninhibited Monkey King. 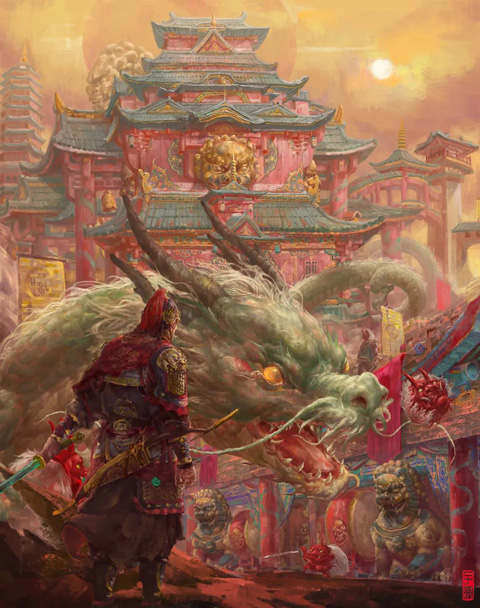 Tang warriors, who dressed in warrior armor and wore masks in the style of Tang Sancai pottery, guarded the tomb of Li Yuan, the founding emperor of the Tang Dynasty.

Xu Zihui, born in Qingdao in 1996, has been in contact with comic strips, sketches and cartoons since childhood, and he has been drawing for 16 years. During his study at the Lu Xun Academy of Fine Arts, he won numerous awards and several heavyweight awards. 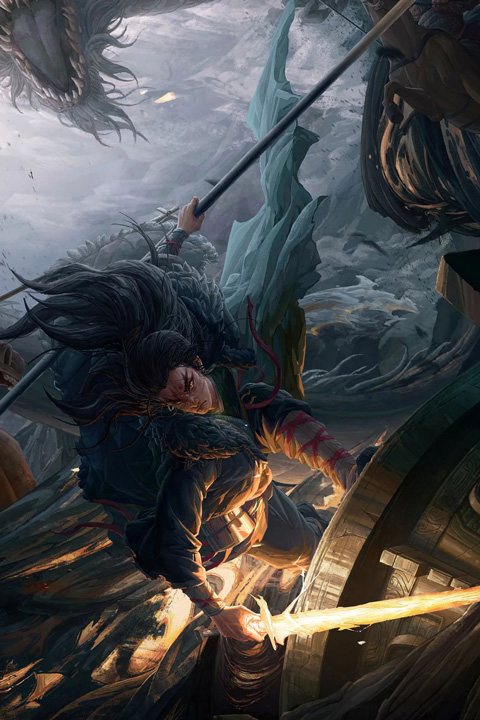 Becoming famous at a young age, most people thought he was a genius. But in fact, Xu Zihui's creation in the past few years is also a process of constant transformation. He changes in each bottleneck and doubt, and gains new life in difficulties just as in his painting. 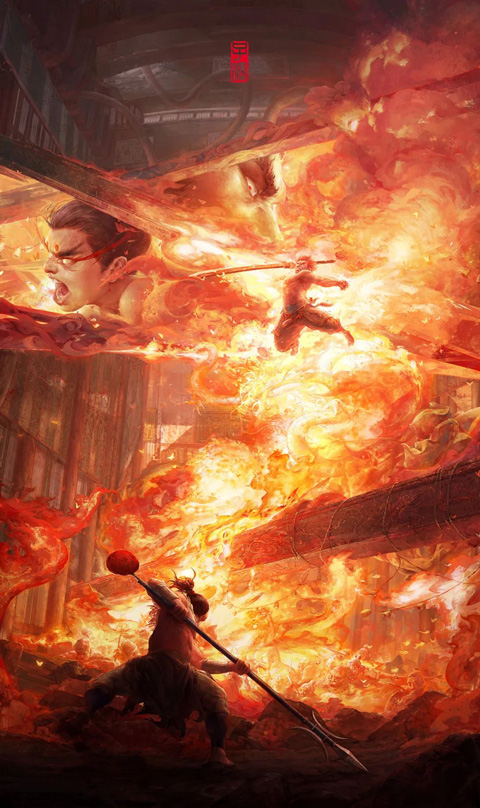 During the seven-year undergraduate and master years, the first two years are a learning process, it is necessary to find the style and direction and learn from outstanding people. In his sophomore year, Xu Zihui was influenced by Zhong Fenghua, Yang Qi, Xu Tianhua, Liu Dongzi and other artists and became interested in oriental fantasy culture, so he began his creative path. 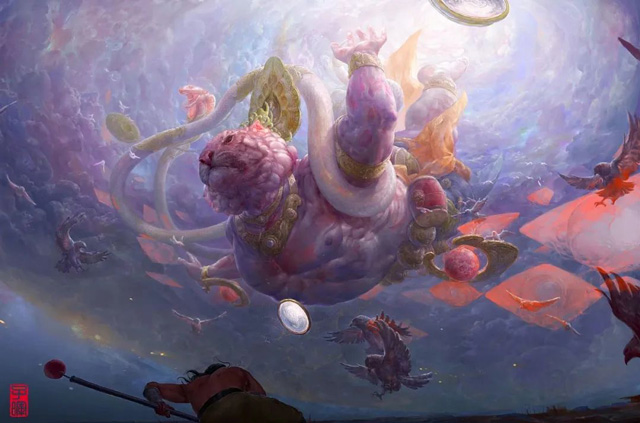 His first series of works was based on Journey to the West. Xu Zihui conducted a large number of literature searches to imagine the picture from the text.

Although the shape of Sun Wukong is designed to be petite, and the gods form a strong contrast, the character performance is unruly, bright and flexible. "Wearing a golden armor and crown, holding a golden-hooped rod and cloud shoes." Every battle is thrilling and every scene matching is very epic. 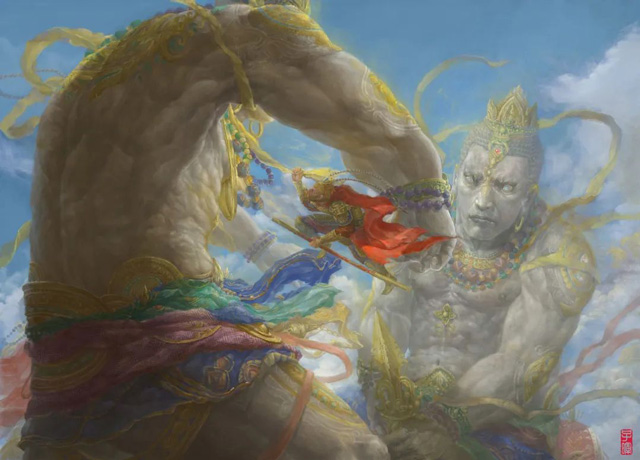 In the painting "Sheng Yuan Zhi Zhan", The wars between Li Jing, Red Boy and the Sun Wukong. The gods are different, and they cannot be drawn as ferocious as the monsters. Xu Zihui adopts the style of Peking Opera to express the celestial deity. At the same time, he also satirizes from the side that although the celestial deity is special, it can't do anything about the Sun Wukong. 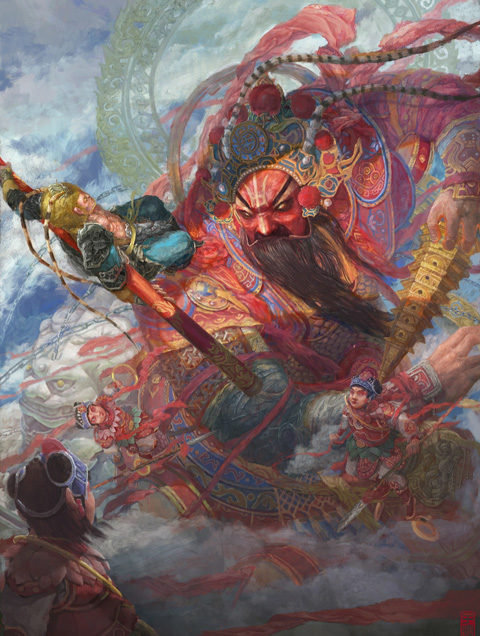 The painting "Jinchi Dapeng" is full of golden light, because it is not a simple monster but a holy beast, so it is decorated like Buddhism and chooses a Tibetan scene in tone. Everything can be seen is detail. 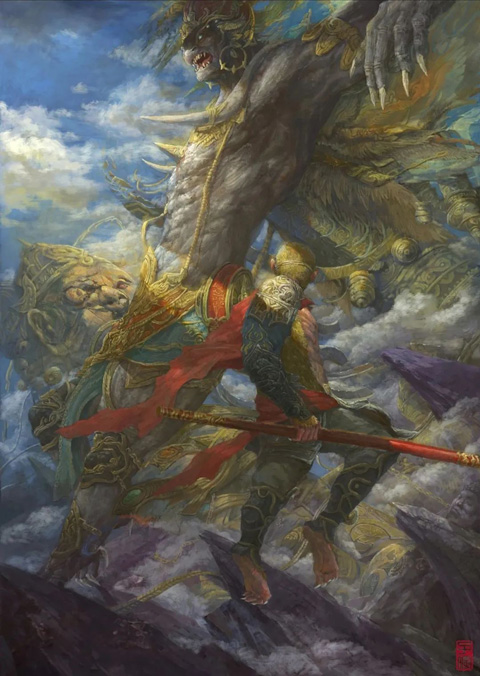 However, the "Qi Tian" series is only a stage of his self-groping. He studies painting techniques and studies knowledge diligently. If some aspects are weak, he will study the skills of the teachers to enhance the picture effect. Xu Zihui does not do deliberate practice, but he requires that each work is higher than the previous one and accumulates from each work. 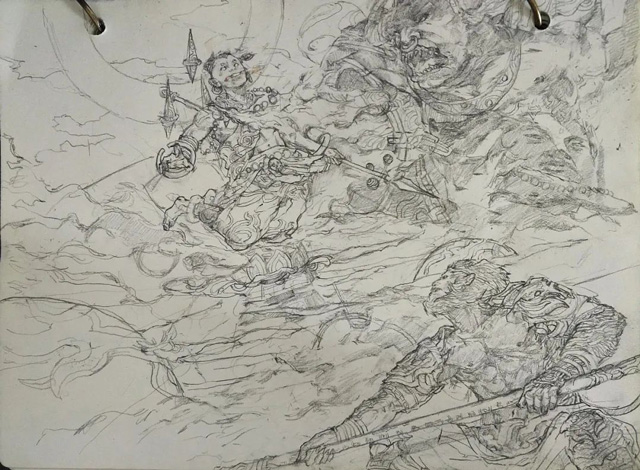 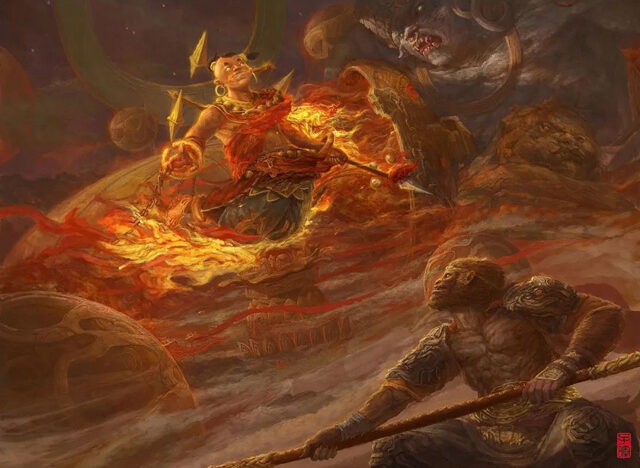 At the same time, he also shares all his manuscripts and ideas. On the one hand, it is a review of what he has learned. On the other hand, it also provides a methodology for everyone to learn. 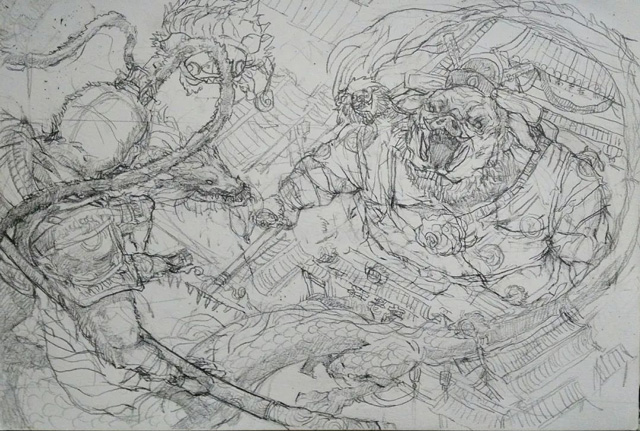 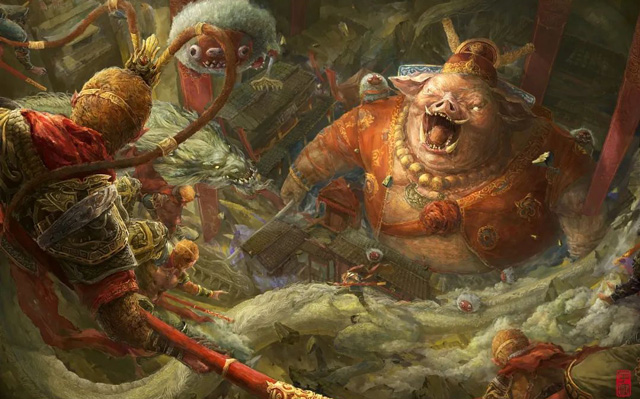 Find his own shining places

In his junior year, Xu Zihui, who had a certain precipitation, chose to summarize his accumulation through another theme "Tang Wu Shi". In the process, he used his personal aesthetic preferences as a reference to select the theme of creation.

Based on traditional classics but does not stick to tradition. He said, "Hope everyone can see his own shining place." 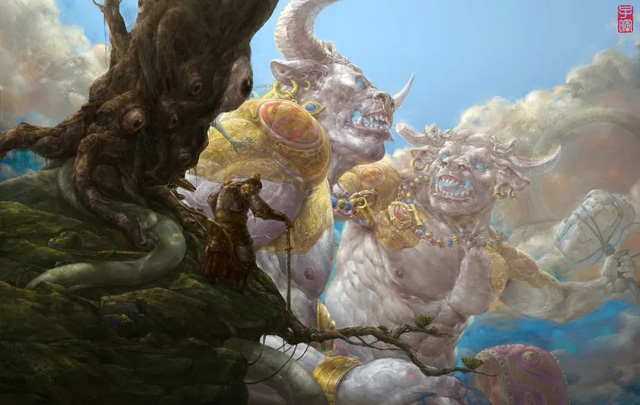 There are no established scenes and stories in "Tang Wu Shi". It is all up to Xu Zihui's own subjective imagination and put the story overhead in history.

After the An Lushan Rebellion, the Tang Dynasty turned from prosperity to decline and was about to perish soon. At this time, the Great Wall was divided into nine parts, transformed into nine sons of the dragon, invading the land from north to south. The Tang warriors guarding the tomb of Li Yuan, the first emperor of the Tang Dynasty, came to the fragmented central Plains wearing warrior armor and masks in the style of Tang Sancai pottery. To revive Li Yuan, and to reproduce the glory of the Tang Dynasty, he embarked on the search for a secret medicine adventure road. 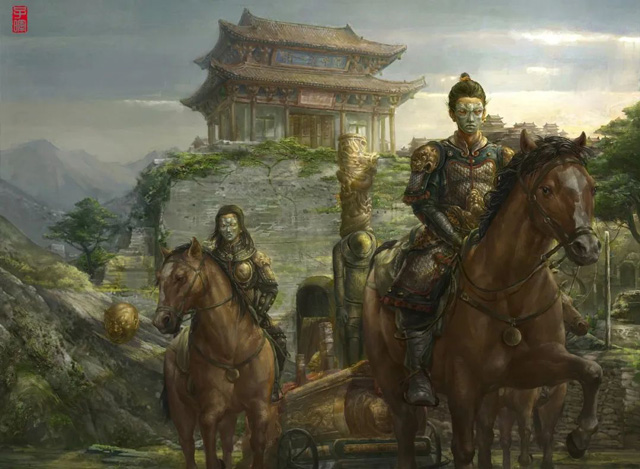 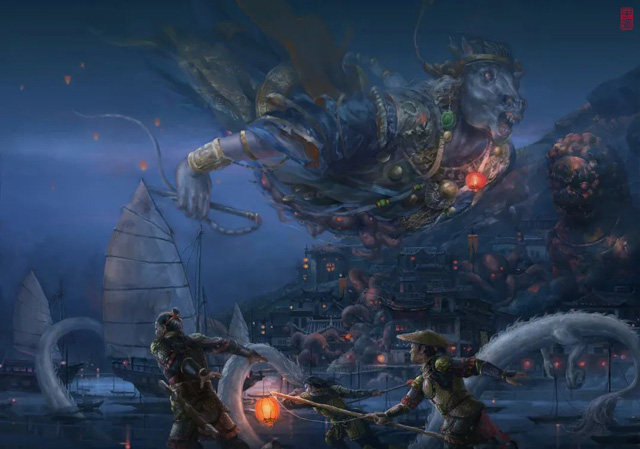 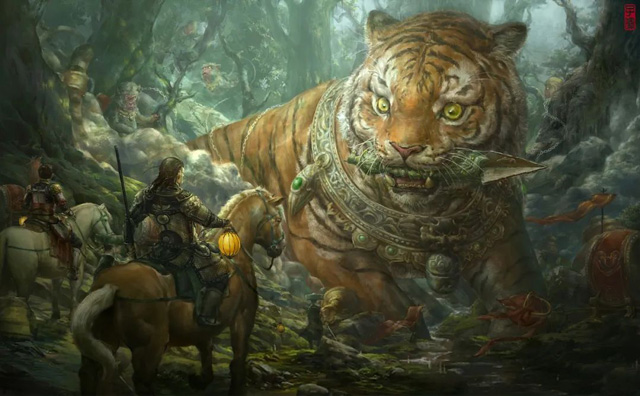 But how to realize it out of thin air? For creation, a lot of it requires enough accumulation and experience. Xu Zihui often goes outdoors to look for inspiration and shoot the material himself.

Most of the characters in "Tang Wu Shi" come from the Shuanglin Temple in Pingyao, Shanxi, the Yuhuang Temple in Jincheng, Shanxi, and the Shaanxi Provincial Museum. This adds a lot of content and detail to his work and makes the picture more flexible and natural. 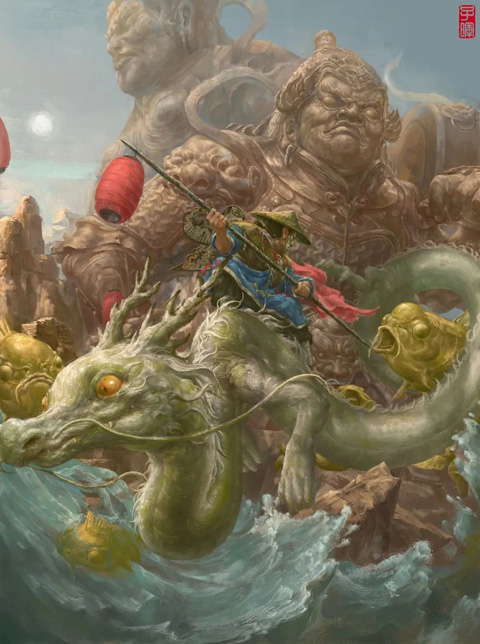 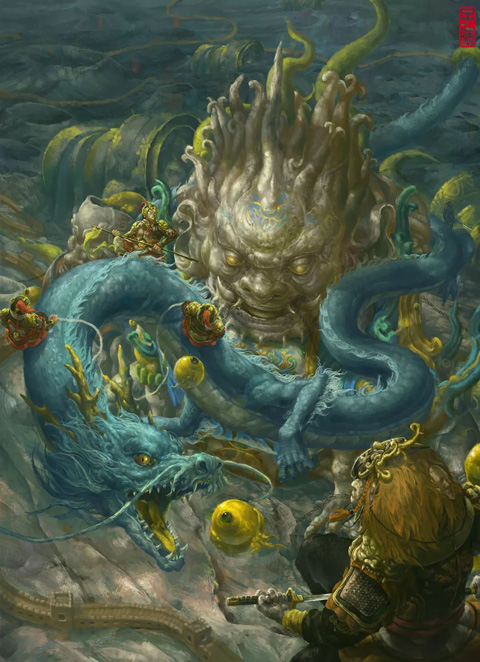 After the creation of two series of works, four years of college time are fleeting. Xu Zihui, who chose to continue his study, reached a new height during his postgraduate study. It took him another 3 years to create a stunning new chapter, "Chu Ge". He then won the the Best Academy Comic Award in 18th Golden Dragon Award Original Animation & Comic Competition (CACC). 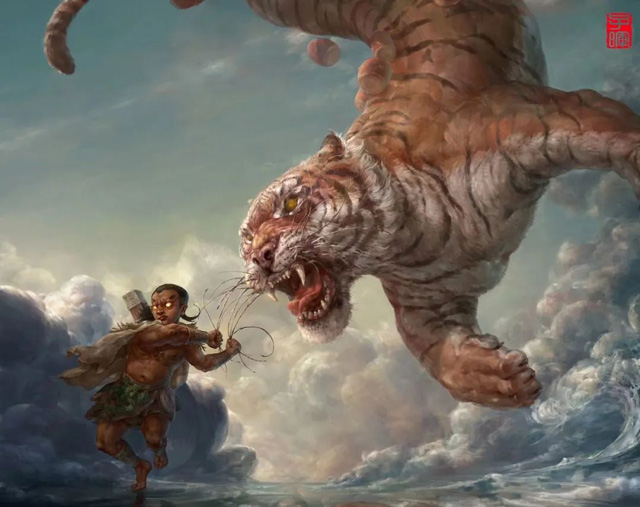 After "Chu Ge" came out, an all-powerful young man Xiang Yu was ready to emerge. After taking his own life by Wu Jiang, Xiang Yu was wiped out of his memory, reincarnated in Western Han, and exiled to earth. He was ostracized, driven away, and displaced. 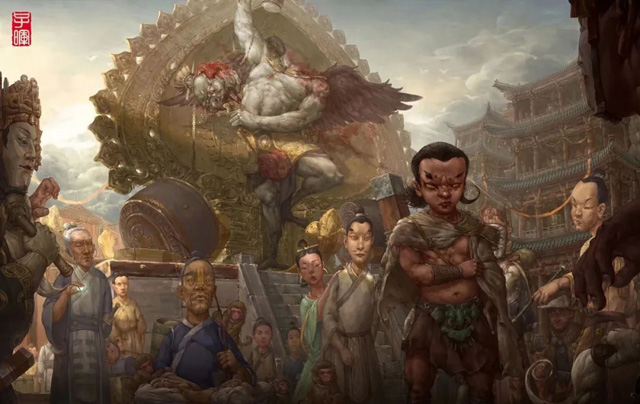 In a wheat field, a fire blazed, and a sleeping memory was awakened that he was born for revenge. When Liu Bang, who feathered into a dragon learned of this incident, he threw Xiang Yu into a pool full of a dragon.

On the brink of life and death, Xiang Yu found a new world under the water. With the help of the three clans of gods, he rescued Zhu Que with Ao Ling, the last blood of the Dragon clan. With the help of Ao Ling's magic power, Xiang Yu broke the army of the tyrant and rushed out of the underwater world. 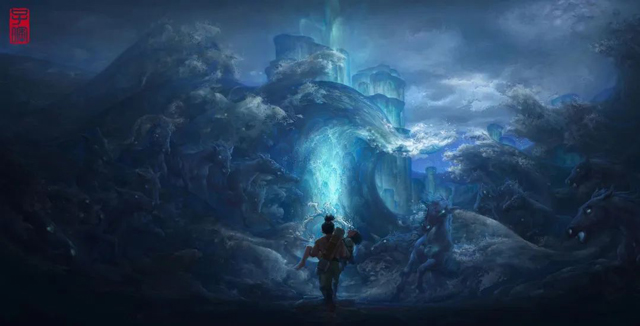 After suffering, he established a deep bond with Ao Ling and finds the true meaning of revenge. To calm the chaos of the world, to rebuild a new order, to restore the four holy spirits to their former glory.

Compared with "Qi Tian" and "Tang Wu Shi" series before, the series of "Chu Ge" is more enthusiastic and delicate. It has built an oriental fantasy hero alliance for young people. 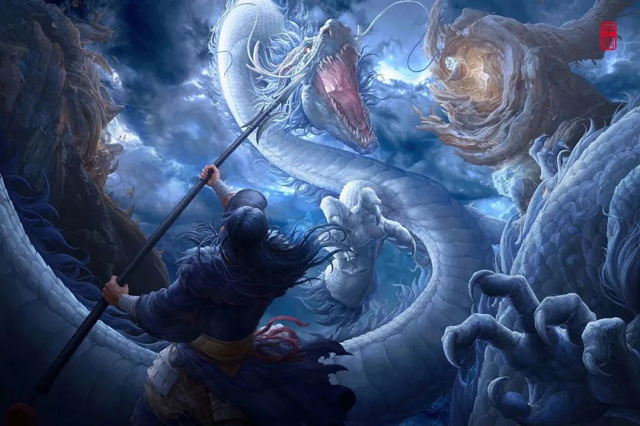 The "Chu Ge" series gave traditional characters Xiang Yu a new life, but after a series of setbacks and blows, the young Xiang Yu realized his own extreme and arrogance and turned this stubbornness into strength to complete his unfinished mission. This was closely related to Xu Zihui's life at that time. In the heart of extreme suffering, encountered many unhappy times. "Chu Ge" is the outlet of his emotions. He finds that he can sympathize with Xiang Yu.

He found that when encountering the bottleneck of creation, he could actually put himself into the story and get inspiration from the content. Self-substitution also opens up the reality of the picture and makes the story more appealing. As Xu Zihui said: "The power is in your most painful time!" 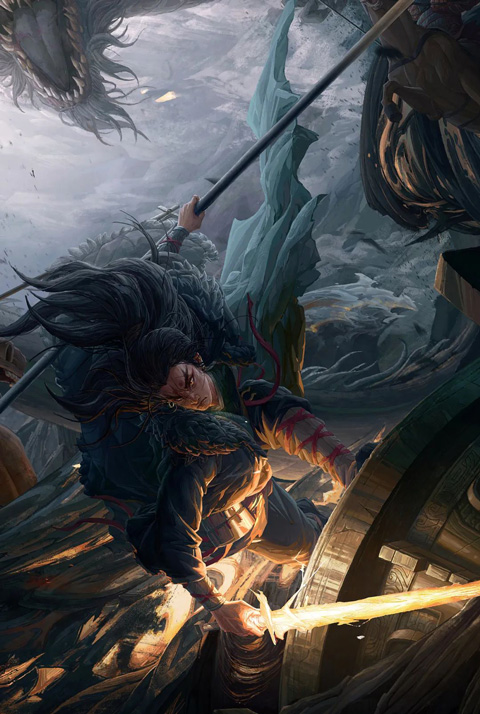 Over the past seven years, Xu Zihui has continued to build a big world in his heart. From "Qi Tian" to "Tang Wu Shi" to "Chu Ge", each step of the change can see his confrontation with himself. He did not revel in his youthful fame, and he was able to get out of the predicament in time. This is the power given to him by painting, and his grand spirit core is presented on the painting and presented to each of us.

New Chinese Style Illustration - Anything Can Be Anthropomorphized Into Painting

April
Creative License: The article is the author original, udner (CC BY-NC-SA 4.0) Copyright License. Share & Quote this post or content, please Add Link to this Post URL in your page. Respect the original work is the best support for the creator, thank you!
Related