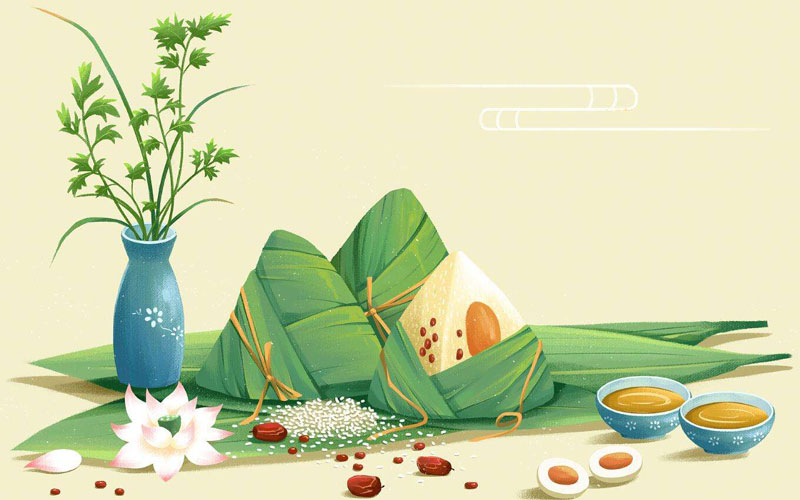 The Duanwu Festival (端午节, Dragon Boat Festival) has long been transformed into a concrete and profound contemporary cultural symbol in the annual ritualistic repetition of the action. As the fifth day of the fifth lunar month approaches, various flavors of Zongzi are marketed, many traditional villages begin preparing for dragon boat races, and Chinese office workers and students await the holiday with great anticipation. 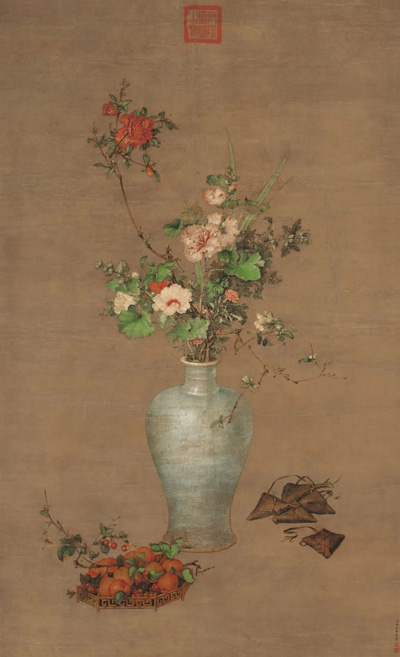 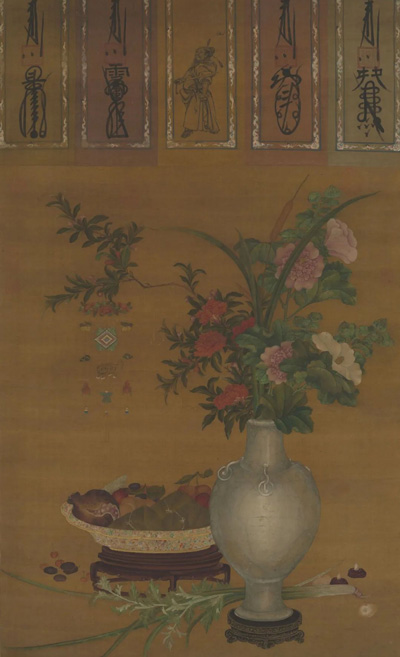 Whenever the Duanwu is mentioned, Qu Yuan is the most familiar to people. In order to commemorate Qu Yuan, who committed himself to the Miluo River, on every fifth day of May, people throw Zongzi into the river; at the same time, they make dragon boats to expel the augur dragon so that Qu Yuan's flesh will not be robbed. This is also the most widespread source of Zongzi and dragon boat racing. 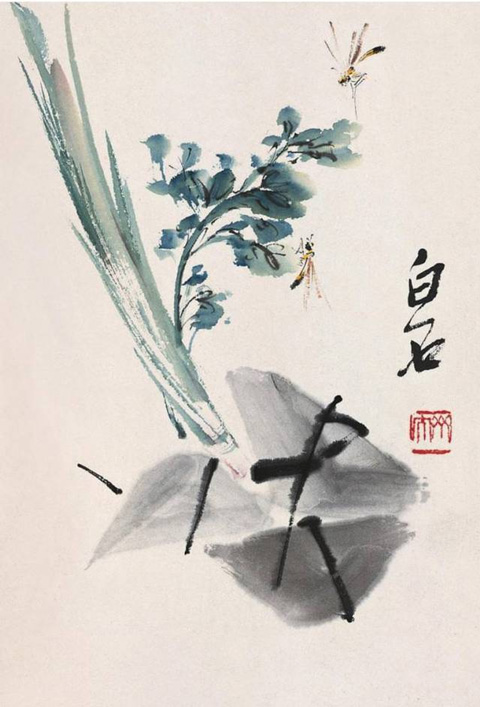 For example, Qi Baishi created the "Duanwu" and "Duanwu’s delicacy" with only a few strokes will be the Dragon Boat Festival of the simple emotions expressed to the full. 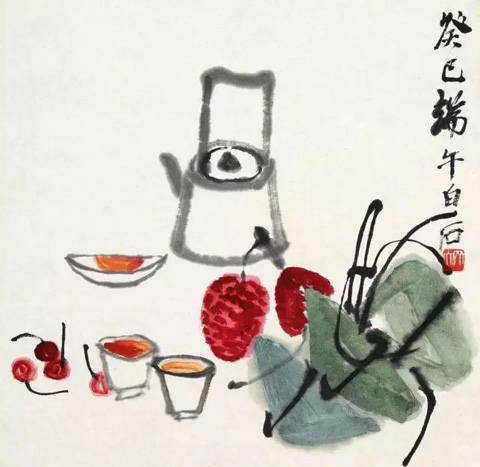 And Zhang Daqian's "Five auspicious signs in Duanwu" put loquat with mugwort leaves, garlic together to repel five poisonous creatures, through the painting to convey the rich atmosphere of the festival. 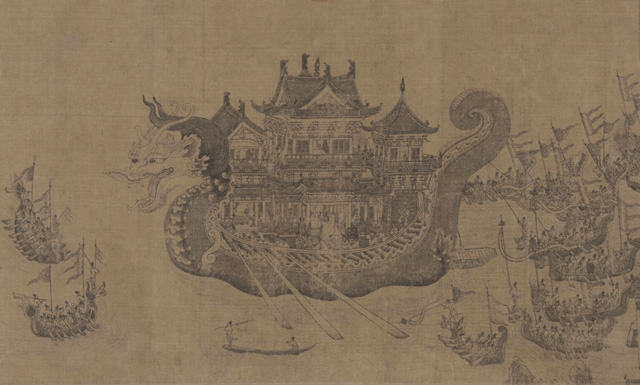 The painter Wu Tinghui of the Yuan Dynasty painted "Scroll of Competing for the Championship of a Dragon Boat Race", which brilliantly shows the scene of several dragon boats racing in the river, in the distance, the mountains overlap and clouds dazzle. 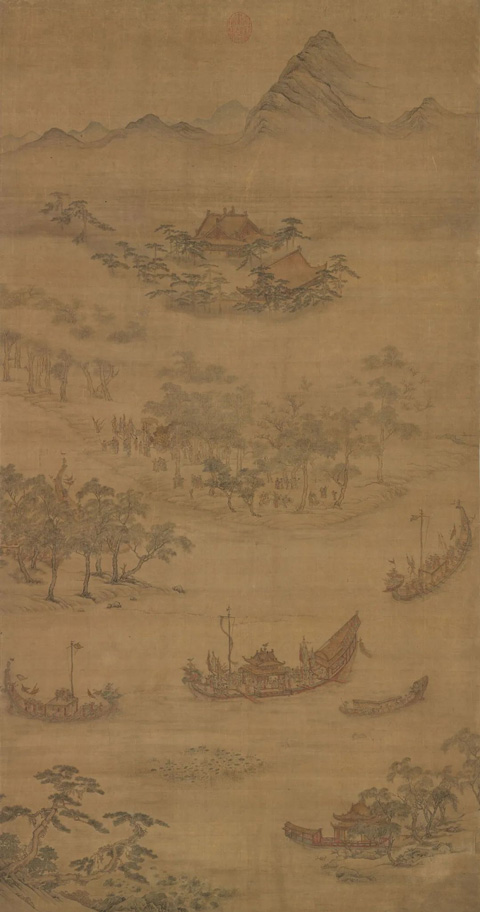 Scroll of Competing for the Championship of a Dragon Boat Race, Wu Tinghui

Wu Tinghui, who specializes in painting landscapes, birds, and flowers, has delicate and soft brushwork. In this painting, the dragon boats are neat, the lines are silky smooth, and the figures are precise and detailed, truly reproducing the scene of dragon boat racing and the crowd of spectators at the Dragon Boat Festival. It is as if one can hear the sound of gongs and drums, with unstoppable momentum.

Painter Wang Zhenpeng has also created work related to dragon boats, called "Dragon Boat Regatta on Jinming Lake". It is based on the dragon boat race held by the royal family at Jinming Lake during the Chongning period of the Northern Song Dynasty.

Meng Yuanlao of the Song Dynasty recorded this scene in the book "Dongjing Meng Hua Lu", and Wang Zhenpeng used fine and complicated lines to outline this exquisite scene in the painting, in which palaces and pavilions, large and small dragon boats, and lively folk activities were recorded in detail.

About the origin of the Duanwu Festival, in addition to commemorating Qu Yuan, Wu Zixu and Cao E also hold important places among many Duanwu legends. But according to modern scholars Wen Yiduo's research, the Duanwu Festival originated in ancient China's Baiyue area, is a festival held by tribes to worship the dragon totem. 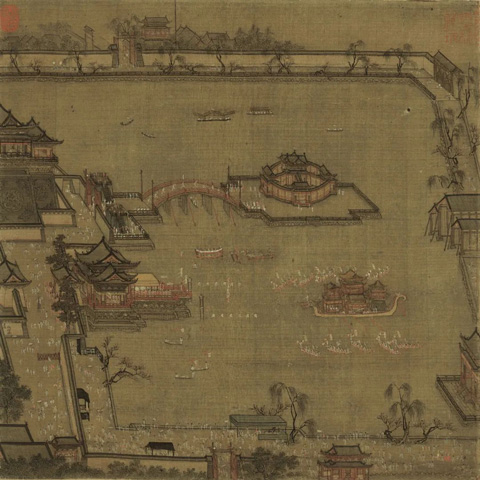 Hanging the portrait of Zhong Kui

Regardless of the various legends, we can learn from the origin and the corresponding folkloric activities, Duanwu Festival is not an auspicious day initially. In ancient times, due to the plague's easy prevalence in May, Duanwu is a festival to ward off evil spirits and poison. In addition to drinking realgar wine, hanging Zhong Kui's portrait is also essential. 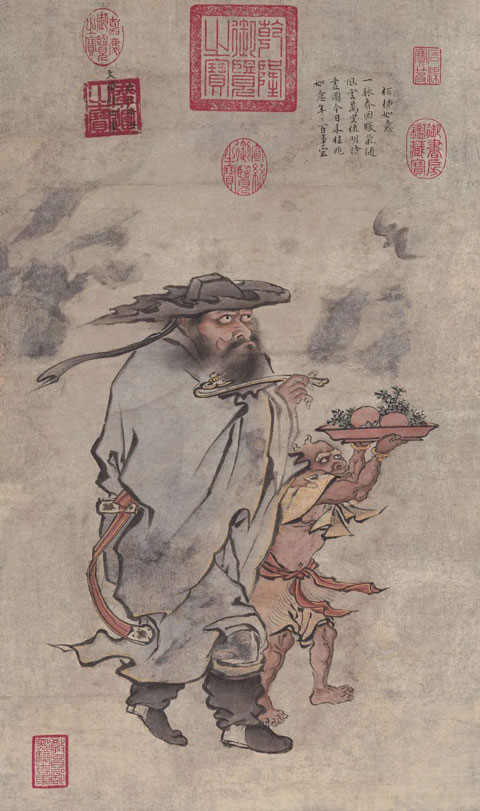 As the legend goes, after returning to the palace from Lishan Mountain, Emperor Xuanzong of the Tang Dynasty had a malaria attack and dreamed that a small ghost had stolen Yang Guifei's incense bag and his jade flute. The emperor was furious and wanted to call his warriors to capture them, but suddenly he saw a deity coming, caught the ghost, gouged out its eyes, and swallowed them.

Emperor Xuanzong asked the deity who he was, and replied: "My name is Zhong Kui (钟馗), I am a scholar of the Zhongnan Mountains, although I am full of talent, but because of my ugly appearance, I was not accepted in the examination, and in a fit of anger, I died by hitting the steps of the hall. Now, I vow to remove the demons from the world." 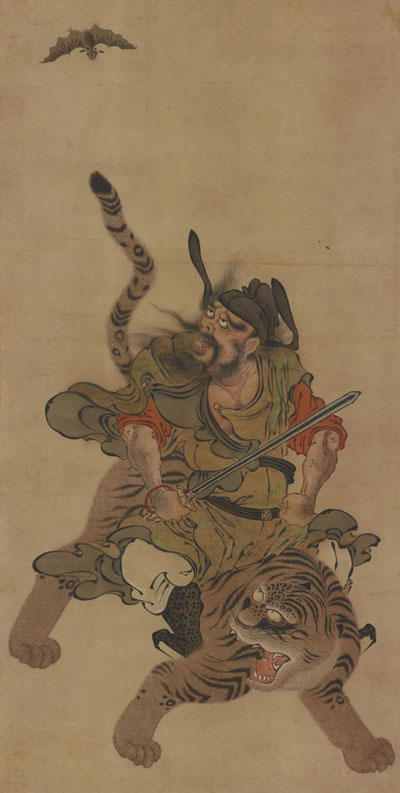 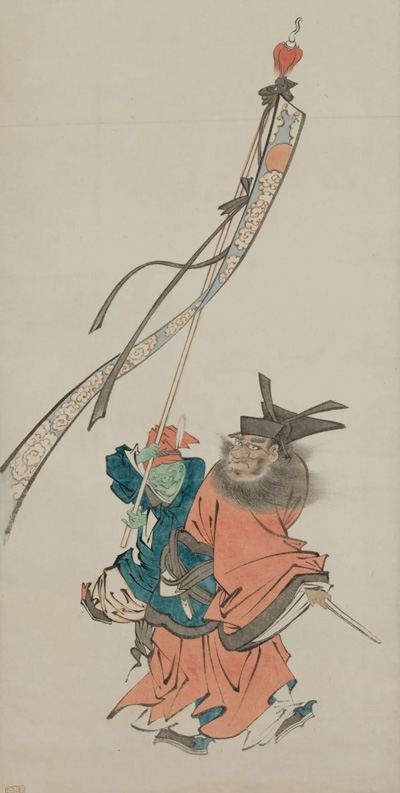 After Xuanzong woke up, he was cured of malaria. He ordered Wu Daozi (吴道子) the most famous painter at that time, to paint a portrait of Zhong Kui to ward off evil spirits as he had seen in his dream. After Wu Daozi received the order, the image of Zhong Kui flashed in his mind and he quickly finished the painting. When Emperor Xuanzong viewed it, he marveled, "The painting is so realistic and evocative, just like my real dream." 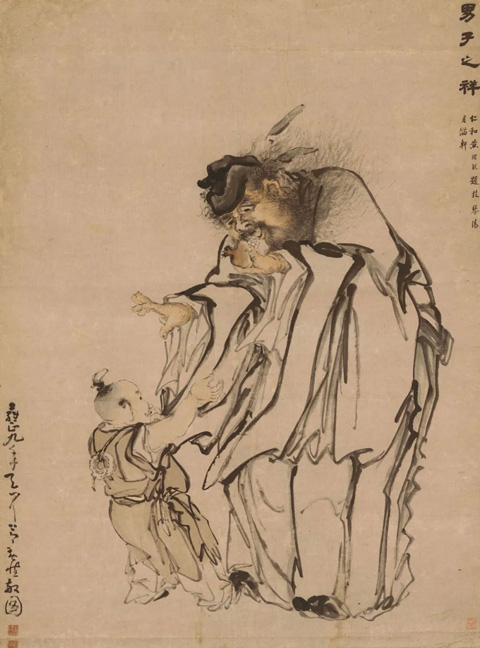 In ancient times, the month of May was regarded as a poisonous month and the fifth day was an evil day. During the Duanwu, the weather is hot and humid, and pests and epidemics are highly prevalent. Therefore, dispelling the plague and eliminating the evil spirit became customary. 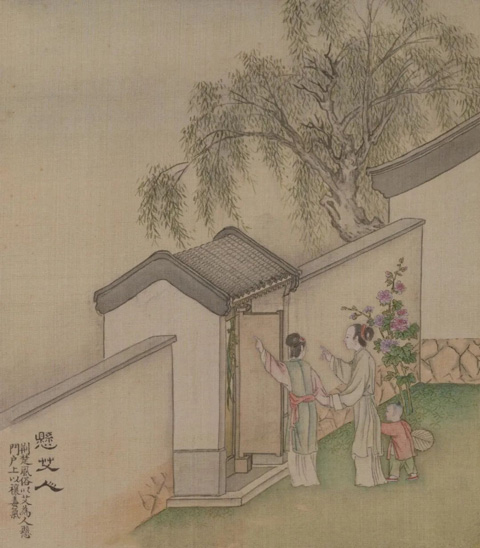 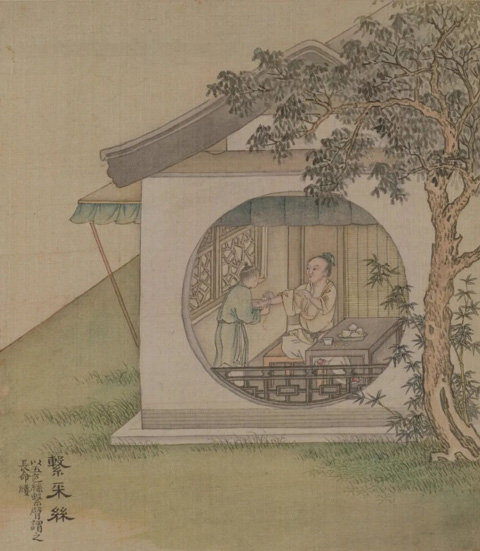 People will hang the calamus and mugwort leaves in the door, taking its herbal medicinal properties to drive away mosquitoes; or ignite the atractylodes and dahurica, to produce a pleasant fragrance of thin smoke, to kill bacteria purposes.

In addition, the ancients would tie a small incense bag with five-colored thread for children, filled with antiseptic effect by the mugwort, sandalwood powder, and mixed spices, using the aroma it emits to avoid some poisonous things. There are many different types and shapes of incense bags, including jade carving, gold filigree, silver filigree, Tian-Tsui inlaid, and silk embroidery. 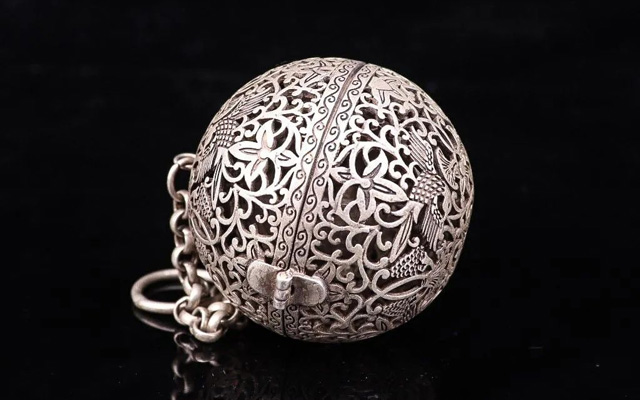 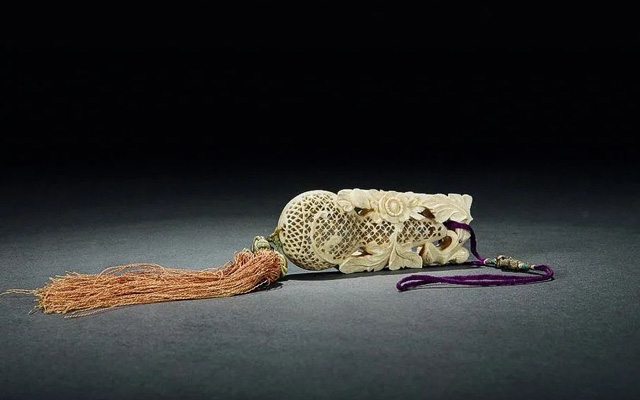 Nowadays, the most common are embroidered incense bags, which use the traditional Chinese national craft of embroidery to form a variety of patterns, designs or words by running punctures with different stitches on the backing cloths of silk, hemp, and cloth.

These exquisite patterns and ornaments have rich connotations, and people convey their emotions between the colorful threads, and they express the symbolic meaning of "praying for good fortune and avoiding evil".

As one of the oldest traditional festivals in China, the Duanwu Festival is full of cultural and spiritual connotations. From these cultural relics and artworks, it seems that we have traveled through the millennia to experience how people in different times used the festival to express their respect and reverence for nature and to show their wisdom and interest in life. Finally, I wish all readers a nice Duanwu Festival! 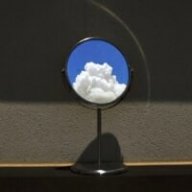