Combining the elegant tradition of the literati in the Song Dynasty and the natural characteristics of the Qingming Festival, Adventures on Qingming Festival 2022 extends the cultural connotation of the series "Chinese Solar Terms" and takes viewers to a spring elegant gathering with a classical flavor.

On April 4, Henan TV's Chinese Solar Terms series, "A Wondrous Landscape of Qingming - Adventures on Qingming Festival 2022" aired, recreating the elegant gathering of the literati in the Song Dynasty, and opening an elegant "Wonderful Tour" in the spring and scenic.

Coinciding with the Qingming Festival, the program takes advantage of a wonderful spring elegant gathering to express the multiple meanings and emotional expressions of Qingming again.

Join a spring elegant gathering together

In ancient times, the gathering of literati was called "Ya Ji (雅集)". In the early years of Yuanfeng, Wang Shen invited sixteen contemporary literati, including Su Shi, Su Zhe, Huang Tingjian, Mi Fu, and Qin Guan, to a gathering in the West Garden. This "Xi Yuan Ya Ji Tu (西园雅集图, West Garden Elegant Gathering)", which took place in Bianjing (now Kaifeng, Henan Province) of the Northern Song Dynasty, is equally famous as the "Lanting Gathering" of the Eastern Jin Dynasty.

Based on the "Xi Yuan Ya Ji Tu", Adventures on Qingming Festival 2022 takes viewers to a classical spring elegant gathering through the perspective of literati in Song Dynasty. After trying the "web drama + web variety" format, this year's Adventures on Qingming Festival introduced the idea of "four-dimensional drama box". On the basis of paying tribute to the principle of "Classical unities" of classical drama, the parallel universe "parallel small theater", which is also the Qingming Festival, is superimposed in the time dimension to build a more open and rich structure design.

In terms of format, the program uses the ancient painting Xi Yuan Ya Ji Tu as a template and the Qingming Festival as a theme to showcase the literati in the "elegant gathering" - Su Shi, Su Zhe, Qin Guan, Li Qingzhao, etc. 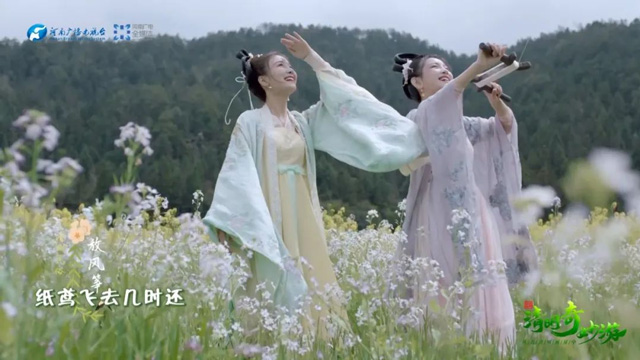 The storytelling design and various artistic methods are used to present the culture and traditional folklore of the Song Dynasty, and to integrate the current social concerns. The unique technique of "moving scenery" in Chinese oriental gardens is used to integrate the plot and program modules into the scenery with typical Qingming season characteristics.

On the rainy day of Qingming, Fan Zhongyan and Ouyang Xiu meet at the Hall of Sui Han, and talk about agriculture, water conservancy and other important matters of the country.

Then, the scene shifts to the dance "A Journey of Music", which shows the busy spring farming, and the narrative theme between the two is cleverly connected, in the tap and resounding dance steps, outlining a scene of joyful and happy people during ancient farming activities. The rhythmic instrumental performance of "Stories under the Moon", incorporates Beijing opera singing into the tune and a new expression through Pingshu, telling the story of Bao Zheng, with the help of chivalrous men and women, eliminates violence and does justice. 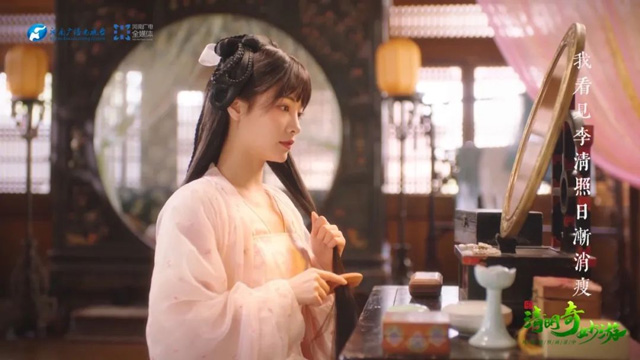 In the tea house, Li Qingzhao and her friends watched a tea whisking competition, but her companion, who was drinking tea on an empty stomach, was "Too drunk to tell one's bearings home". 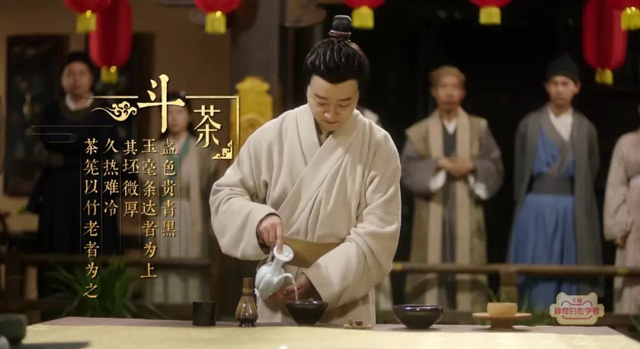 Then the scene shifts, and the song adapted from Li Qingzhao's eponymous poetry, "Sheng Sheng Man", plays perfectly with the opera program "Missing My Beloved on Qingming Festival", using the "Pingtan + Kun opear" performers to interpret the sorrowful parting of a talented man and a beautiful woman. 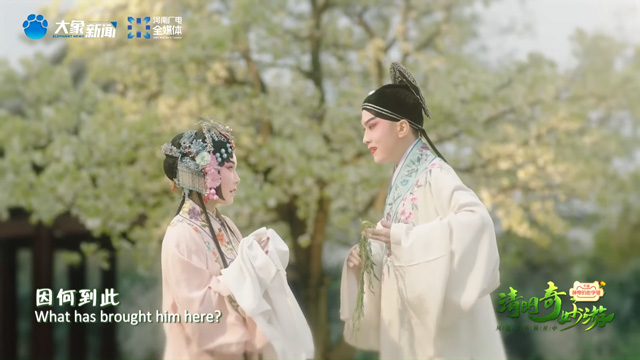 The artistic form is unconventional, and the program incorporates ancient rhythms and new sounds, combining theater, opera, singing, dance and other forms, combining classical charm and current trends, colliding with the freshness of spring.

The two-dimensional view of classical drama, the three-dimensional special effects supported by technology, superimposed on the traditional customs of the Qingming Festival, brought the overall feeling of the program with a blend of scenes and ancient and modern reflections.

Spring Festival, Lantern Festival, Qingming Festival, Dragon Boat Festival. Each traditional Chinese festival has its own unique connotation and cultural imagery. Qingming is both a festival and a solar term, with multiple layers of ritual and customary themes.

Starting from the origin of Qingming, the program revolves around two thematic meanings of festival and the solar term: not only in reminiscing the deceased sages, showing the sincere emotions between people across life and death, and the spirit inherited from China for thousands of years; but also the activities in the spring to get close to nature, showing the value of the unity of heaven and human.

The "Blue Birds Sing for Spring", a dance based on the ancient beast the bluebird, shows the mythical story of "the bluebird flying high, sending the spring colors". 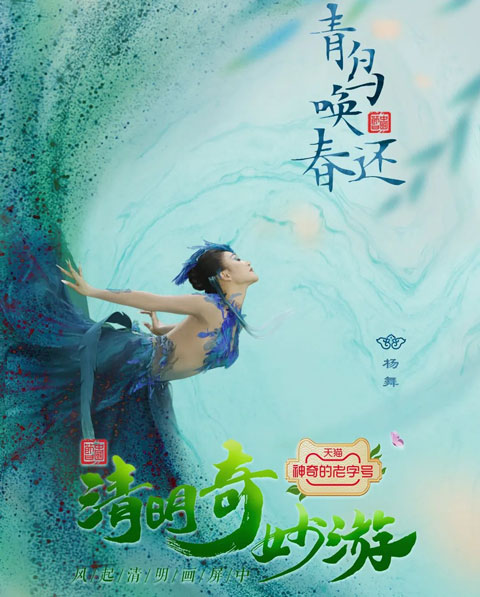 "The Animated Folk Custom Show: Qingming Festival Around the Corner" recreates traditional Qingming customs such as swinging, eating Qingtuan, Cuju, and willow sticking, presenting the history and culture of the ancient Qingming Festival and the happy scene of people picnic in the spring.

In the poetic image, "Missing My Hometown on Qingming Festival", the song is a tribute to the ancestors in the ancient villages, and the lyrics are full of thoughts for the ancestors and the simple value of "pursuing the future with care and virtue". 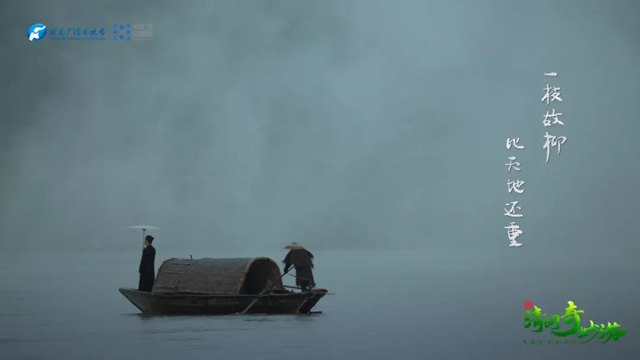 "Petals Dance in the Gust" uses dance to show the state of Xin Qiji at different stages of his life, from his youthful ambition to the sorrowful old man's feelings in his twilight years, showing a heavy sense of family and country. 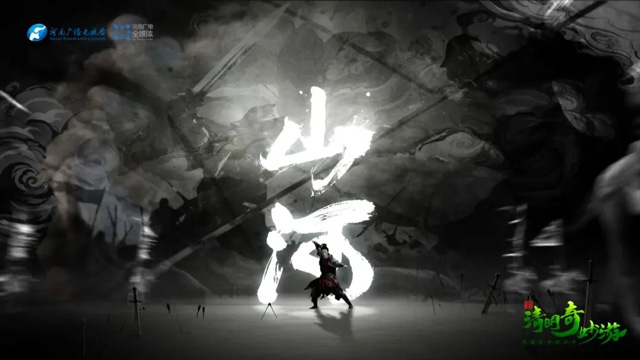 The specially designed interactive program "Clouds Fade into Rain" returned to the emotional theme of "reminiscence", collecting photos and stories of from netizens, and using songs and animations to talk about the person in their hearts that they can't let go of. It brings the emotional expression to the climax and achieves deep resonance and reverberation with the audience. 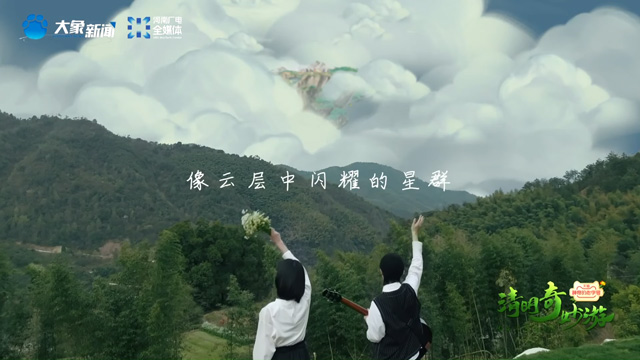 Through the multiple interpretations of Qingming Festival, the program starts from the creative transformation of traditional culture and the emotional expression of ancient and modern sympathy, and uses the language of television to draw a modern video version of "Xi Yuan Ya Ji Tu", attracting viewers to approach more "Chinese festivals".