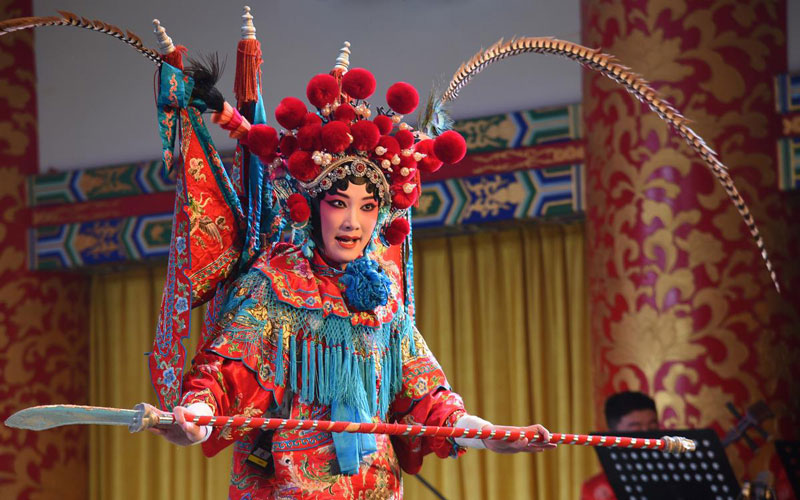 China is an ancient multinational country, with a long history and brilliant culture. For thousands of years, many abundant forms of traditional performing arts have been formed under the wisdom and industriousness of workers. Each art form has various styles and schools, including opera, puppetry, Chinese shadow, acrobatics, and quyi. Chinese traditional performing arts are important representatives of the national spirit, showing the quintessence of ancient culture, and some of them are registered in the list of Intangible Cultural Heritage of Humanity.

China's opera, enjoyed incomparable fame, is known as one of the world's three ancient dramatic cultures, the others being Greece's tragicomedy and India's brahman drama. It is an art form of long history, originating from primitive song and dance. With steady development, it has become a complete system in the Song and Jin dynasties. It is composed of literature, music, dance, fine arts, wushu, and acrobatics, nearly 360 kinds. As it evolves and innovates in the long run, the five most distinguished types of operas appear: Beijing opera, Yue opera, Huang Mei opera, Pingju opera, and Yu opera.

In primitive society, original singing and dancing arise in the tribes. In fact, the ancient tradition exists in some stale fields, for example, Nuoxi. At the same time, new songs and dances are born in order to meet the needs of the people, such as fire dance, yangge, which improves the level of artists constantly.

After the Tang Dynasty, Chinese opera developed rapidly, and dramatic art gradually developed. The development of poetry and the prosperity of music and dance provide a strong foundation for opera, accelerate this process of improvement, then appear opera performances performed by storytelling. 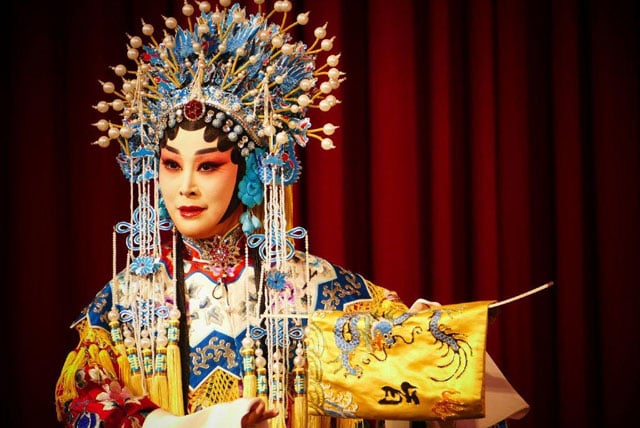 In the Yuan Dynasty, Zaju became a new opera based on the previous ones, meaning that Chinese opera entered a mature phase, and excellent works were presented in large numbers: The Injustice of Dou'e written by Guan Hanqing, The Autumn of Han Palace by Ma Zhiyuan and The Orphan of Zhao Family.

In the middle of the Ming dynasty, a profusion of writers of poetic dramas arose, among them Tang Xianzu is the most distinguished, and Peony Kiosk is his masterpiece. Peking Opera began in the mid-19th century and is considered one of the highest expressions of Chinese culture. On November 16, 2010, UNESCO declared Peking Opera as Intangible Cultural Heritage of Humanity.

- Sheng
Generally refers to male roles, they are divided into different types according to age, identity, such as laosheng, xiaosheng, and wusheng. Laosheng is a middle-aged or older, honest and resolute, bearded man. Xiaosheng, the young man without a beard. And wusheng is about the strong young men in wushu.

- Dan
It is the treatment of female roles. It is divided into several parts according to age, character, and identity: zhengdan, huadan, wudan, laodan, and caidan. In general, zhengdan is the quiet protagonist, such as young or old women, called qingyi also because of the custom of wearing green clothes.

Extraverted ladies are called huadan, often their performances are comical. Women are capable of wushu entitled wudan, divided into daomadan and duandawudan according to character and skill. Laodan is old. Caidan is called choudan or choupozi, played the crafty woman. 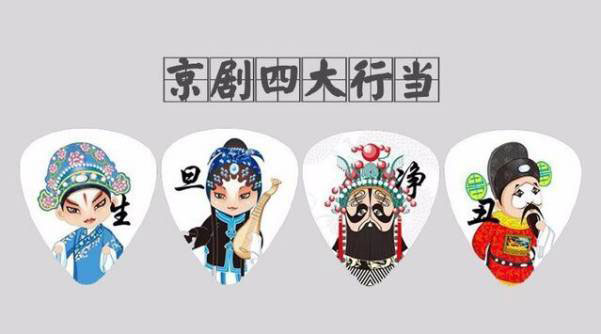 - Jing
It is known as hualian, brash or temperamental or sinister or reckless. Dahualian plays the role of the highest position; erhualian, the fearless role.

- Chou
This is the comedy role, called xiaohualian. It can play many figures, good-natured, humorous; marrajas, ignoble.

Thick makeup is to describe the roles of jing and chou, distinguished sheng and simple dan. People usually identify them through colors, for example: 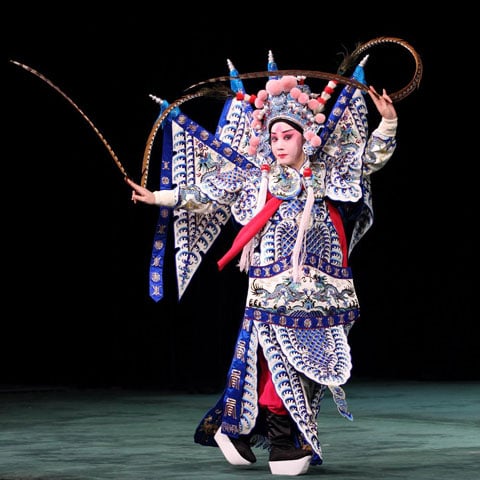 Being the unique treasure of China's literary and artistic circles, it is an opera that tells stories through puppets, also known as marionettes. They can be divided into a few types according to different shapes and manipulation techniques, such as cloth bag puppet, string puppet, wire puppet. On May 20, 2006, the State Council declared puppetry as an Intangible Cultural Heritage of Humanity.

The perfect performance of puppetry is not only due to the high mastery of the craftsmen, but also depends on the brilliant form of the puppet and the whole equipment. Generally, the string puppet is tall, about 2.2 chi. 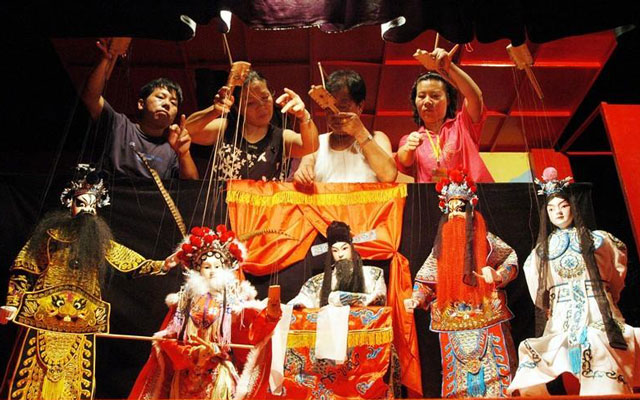 The important parts are fixed by more than 30 threads, at least more than 10 threads. The wire puppet is popular in east Canton and west Fujian, they say it originates from shadow puppetry. The height of the puppet is about 1 to 1.5 chi, with multicolored clay head, tung body, paper hand, and foot.

The cloth bag puppet has its origin in Quanzhou or Zhangzhou of Fujian province of the 17th century. The head, feet, and hands of the puppet are made of wood, and the remaining parts are made of cloth, it gets this title precisely because of this reason. The dialogue is the essential soul of the cloth bag puppet, therefore the master spoken in min nan is the irreplaceable figure. He is in charge of all the dialogues of everyone even though women, men, elders and children. The representatives are the PiLi cloth bag puppet and JinGuang puppet.

Also called shadow opera, it is a folk opera that tells stories through the shadows of figures cut out of cardboard or skin. When performing, artisans handle the figures behind a white curtain while narrating the stories in a popular local tone, accompanied by background music.

Chinese shadow puppetry is an ancient traditional performing art among the people of China, recorded to have begun in the Western Han Dynasty and reached its peak in the Qing Dynasty, spreading to West Asia and Europe in the Yuan Dynasty. It was included in the list of Intangible Cultural Heritage of Humanity in 2011. 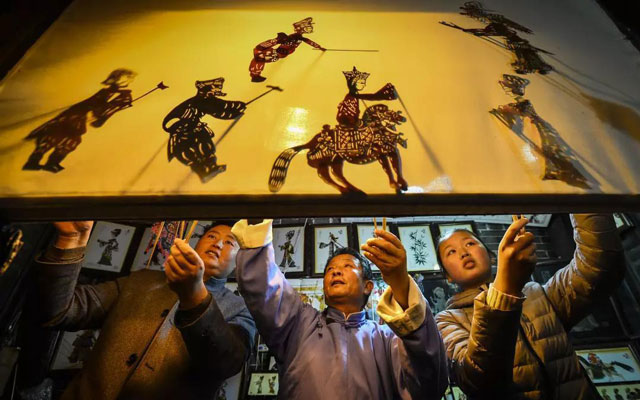 It has a history of more than 2000 years. About its origin, an amatory story is recorded in the Book of Han: Because of the death of his favorite wife Lady Li, Emperor Wu of Han missed her so much that he did not go to court.

One fine day, a minister named Li Shaoweng was inspired by the shadow of the doll on earth after watching some children playing with a rag doll. So he made a shadow of Lady Li out of cloth, painted colors, and installed sticks that served as hands and feet. When evening came, he invited the emperor to look at her, and the emperor was happy to see the shadow of his love.

Development and prosperity of the Chinese Shadow

From Goethe to Charles Chaplin, many celebrities have valued much about the art of Chinese shadow. With the progress of society and the perfection of life, the aesthetic level is gradually improving, so people carve the roles with the more excellent techniques with the motive of underlining the quintessence of Chinese shadow. They will show their special charm through stage arrangement, role gesture, and rich color.

Its Chinese name is zaji, titled by Premier Zhou Enlai when he founded the China Acrobatics Ensemble in 1950. As acrobatics comes from actual life, the most representative feature is variety, contained jujitsu, ventriloquism, lion dance, funambulism and pagoda bowl, much of them based on life and work skills.

It has a history of more than 2000 years. The harsh natural conditions of ancient society are favorable to develop the skills through collecting, producing and hunting, such as running, jumping, throwing, swimming, and fighting, and finally become forms of entertainment. This is the embryo of acrobatics. Before the Qin Dynasty, early acrobatics was related to hunting and warfare, including wrestling, weightlifting, and riding. Until the Han Dynasty, it was very popular among the court and the people. 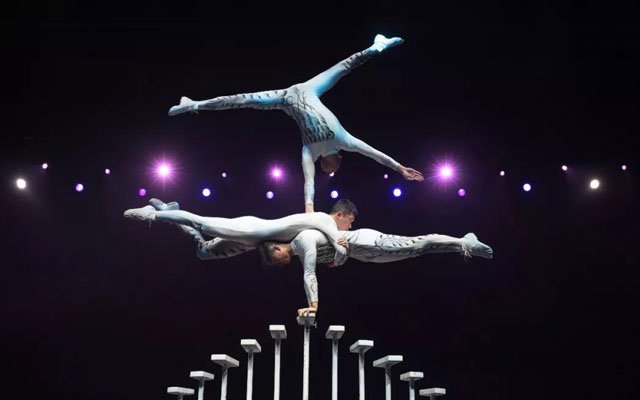 In the Tang Dynasty, acrobatics reached the peak, and poets praise it by writing poems. During the Song Dynasty, many performance venues appeared in Bianliang and Lin'an. However, it risks being biased by the lack of responses in the Ming and Qing dynasties. After 1949, acrobatics has become the messenger of cultural exchanges between Chinese people and the people of the world.

After the founding of China Acrobatics Ensemble, visit to the Soviet Union, Poland, Czechoslovakia, Hungary, Bulgaria, Albania, Finland, Denmark, Sweden, and Austria, showing wisdom, industriousness, optimism of Chinese people for the wonderful shows. For about half a century, the acrobats have been touring almost all over the world, presenting their graceful appearance to more than a hundred countries.

Even some countries that do not have diplomatic relations with China welcome the arrival of the China Acrobatics Ensemble, which accelerates the process of friendly exchanges between China and these countries.

A total deal of various speech and singing arts of the Chinese nation, it is a special art form evolved from oral literature and long-term singing art. According to incomplete statistics, so far there are 400 or so types among the people. Although as an art form with a long history, it does not occupy an independent position in the art world. Until after the founding of the People's Republic of China, this mature art has its own name at last, called quyi, and at the same time can perform it in the theater.

It is an art of oral form, formed in the early Qing dynasty and popular in the northern area. In general, a person in long robes sits behind the table with a fan and gavel narrating the stories. The gavel is to attract the attention of the spectators and strengthen the performance effect. Pingshu is of the northern tone, based on Beijing tone Mandarin. Usually, the themes of pingshu are the stories of heroes or dynasties. However, as the era progresses, pingshu has been disappearing, the spectators are only the elders.

It is composed of pinghua and tanci, produced and popular in Jiangsu, Zhejiang and Shanghai provinces. In 2008 it was included in the list of Intangible Cultural Heritage of Humanity. Usually only one person performs pinghua, including the tales of heroes or dynasties. And tanci is two people, holding sanxian and pipe, telling some amatory legends or folk stories. The tone and style of suzhou pingtan are various after long-term development. 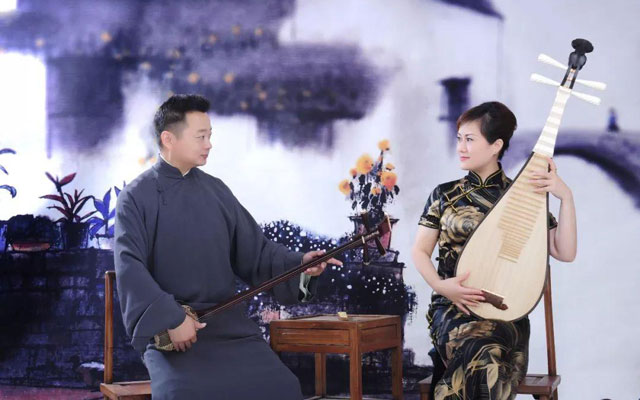 It is characterized by talking, learning, teasing, and singing. It has its origin in North China, popular in Beijing, Tianjin and Heibei, started in Ming and Qing dynasties, and reached the peak in the contemporary era. As everyone knows, xiangsheng is the strongest art in communicating with the spectators, even the other arts cannot enjoy this glory. On June 7, 2008, it was declared in the list of Intangible Cultural Heritage of Humanity.

The excellent cultural art of any country and nation is the spiritual wealth of mankind, and it is an important part of the world's cultural treasures. Cultural and artistic communication not only shows wisdom, but also contributes greatly to the strengthening of friendship between countries.