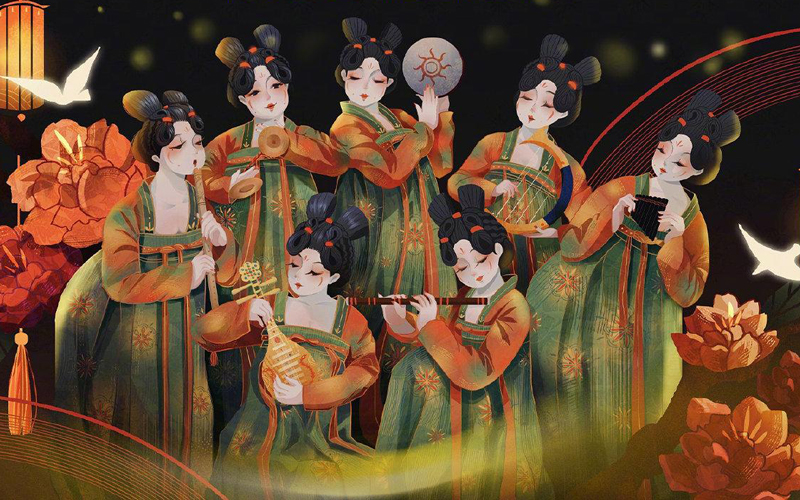 In order to thank everyone's love, on the eve of the Lantern Festival, Henan TV held another Lantern Festival party "Lantern Wonder Night (元宵奇妙夜)", not surprisingly, the program once again received a lot of praise, although the Lantern Festival has been nearly a week, but I still decided to share this wonderful program combined with Chinese Hanfu costumes, dance, opera, Chinese style songs and many other elements to everyone.

It is known that Henan TV had no intention to hold the Lantern Festival party, but in order to return the enthusiasm of the fans, the director team decided to do this "Lantern Wonder Night", the whole shooting only about 5 days, so the entire program length of only 30 minutes.

Although the planning and shooting time is very tight, but you can see that the director in the 30 minutes to integrate a variety of novel ideas, innovation, still a high standard of the program.

The most special thing is that the whole party is almost a live-action shooting. There is no host crosstalk, no interstitial advertising.

At the beginning of the program, this animation of the Tang figurines transforming into Tangyuan is very cute and adorable, and it makes people's hearts melt.

Then, the scene switched to the Henan Museum. When the night is late, tourists leave, a security guard of the Henan Museum played a bone flute, the display of the Tang figurines heard the sound of the bone flute instantly transformed into human form.

It was as if the dancers performing at "Tang Palace Night Banquet" were awakened by the sound of the flute and were excitedly weaving in and out of the modern museum.

At the same time, they seem to have the magic to lead people to travel to the past through cultural relics and lead the audience to appreciate the beauty of Henan and the civilization of China. This group of Tang figurines girls successfully tied up the whole program.

They came to Yingtian Gate in Luoyang, the magnificent architecture and sparkling fireworks feel as if they were really seeing the scene of the flourishing Tang Dynasty with its majestic atmosphere.

In Luoyang Mingtang, a segment of the dance drama "Shuiyue Luoshen", "Furong Pond" was being beautifully staged, telling the legendary story of Zhen Fu (甄宓), the goddess of Luo Shui.

Finally, through the "Along the River During the Qingming Festival" brought back by the crane, the girls also traveled from the Tang Dynasty to the Northern Song Dynasty, and in the Qingming River Garden in Kaifeng, a pear garden opera was being sung.

When all the programs were finished, the Tang figurines girls returned to the Henan Museum and changed back to the appearance of the Tang figurines, and a thrilling and wonderful "Lantern Wonder Night" came to an end.

Full video of the program: