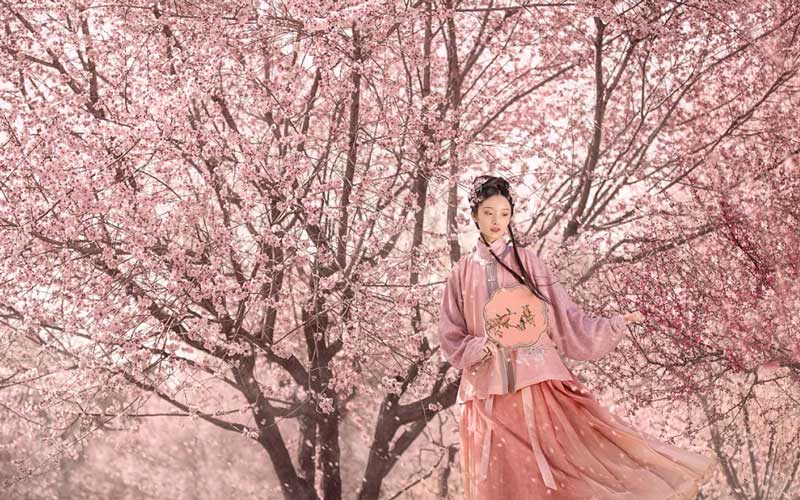 Girls are always very fond of some pink things because this color of clothes or toys looks cute and fits the psychological preferences of girls. And some pink Hanfu as well, Hanfu girls with this pink Hanfu look but also can show a special smaller and more adorable feeling.

So today, let's go into the world of the traditional Chinese color, pink and feel the cultural blend and heritage behind it.

The Origin of Chinese Pink

Pink, the Traditional Color of China

During the Han dynasty, the Emperor and the Empress wished to wear five different colors of ancient Chinese robes during the five seasons, which was called " Wushi Clothes ( 五时衣 wu shí yī )". Later on, women's dresses for the four seasons developed from this foundation, drawing on the natural colors of flowers, sky, sun and moon, ice and snow, and neon, which changed with the seasons.

The colors of women's dresses in spring are as brilliant as mulberry leaves, peaches, begonias, and peonies.

We can say that it is the soul of the classical color scheme: poetry, philosophy, and labor are all seen in the colors.

Many flowers have pink, such as camellias, peaches, and chrysanthemums. 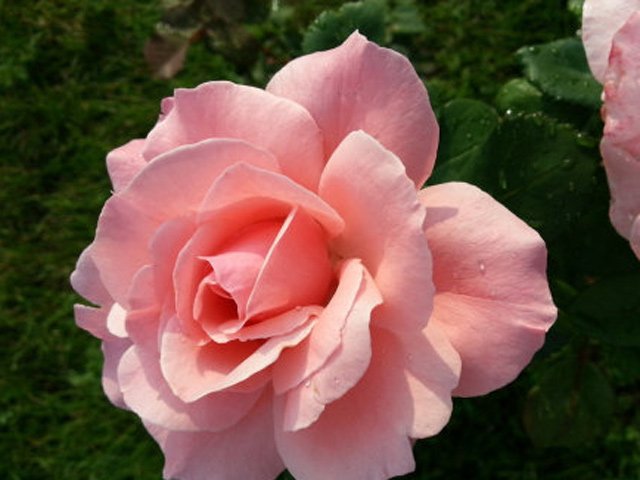 It is depicted in books such as Tang Poetry and The Story of the Stone, and can also be seen in paintings.

Pink is often misunderstood as the missing color in traditional painting. In fact, as early as a thousand years ago, the painters at Dunhuang's Mogao Caves already used various pink colors to illustrate this different kind of beauty to us.

In the traditional Chinese art system, the use of pink patterns is also extremely widespread. Especially in the Peking Opera, Hua Dan, Qing Yi, and Lao Dan usually use rouge pink graphics for makeup embellishment to highlight the feminine positioning of the characters. 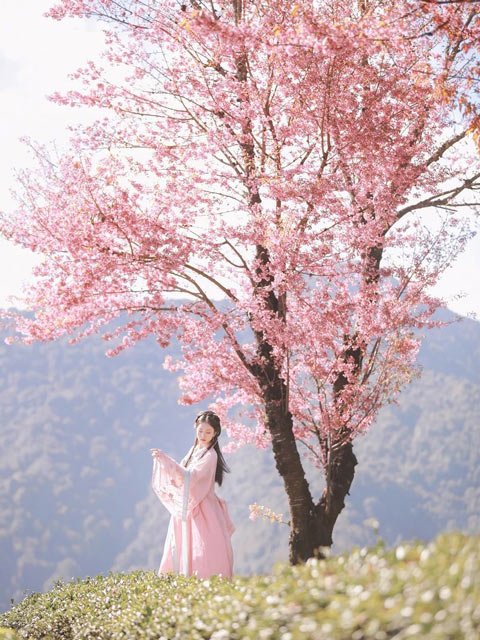 When did pink appear as a color word? There is no precise evidence of this, but it appeared on silk colors in general after about the Tang dynasty, especially in the Ming and Qing dynasties, and generally appears on silk colors. So what is the dye? No information. But the ancient red dyes were nothing more than saffron, cinnabar, logwood, and carmine, all of which could be used as pink dyes.

Today, in the United States and Europe, a glance at a newborn baby's swaddling clothes tells immediately whether it is male or female, a blue blanket for boys and a pink blanket for girls, and the clothes worn follow the same rule. The French considered pink for delicate girls and blue for boys. The post-World War II economic boom was filled with gaudy colors, including pink.

The most well-known was the LaFemme, a new pink and white car designed specifically for women, which was introduced by Dodge in 1955. This was followed in 1957 by the release of the movie Funny Face starring Audrey Hepburn, which caused a wave of pink for women. 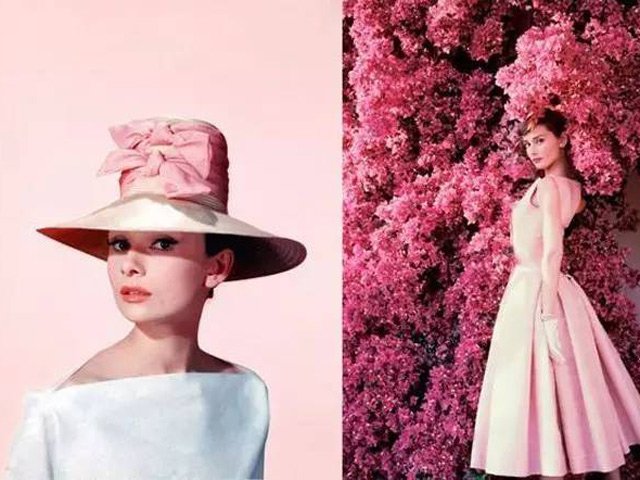 In China, pink has also always been popular. Pink can be found everywhere in both homes and clothing, it's traditional and modern, ancient and fashionable, and it's even more so in traditional Chinese clothing. 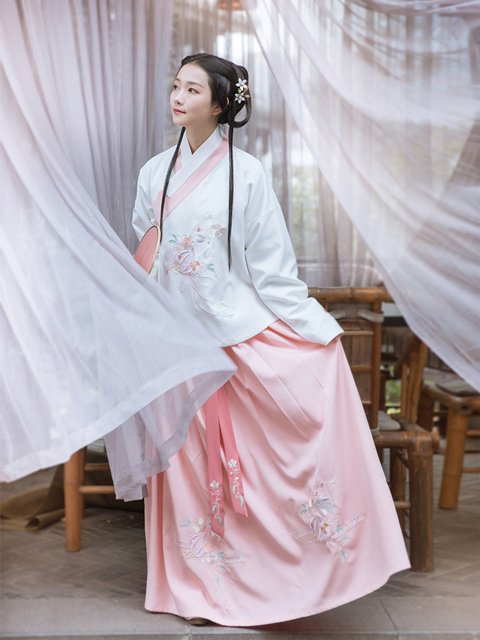 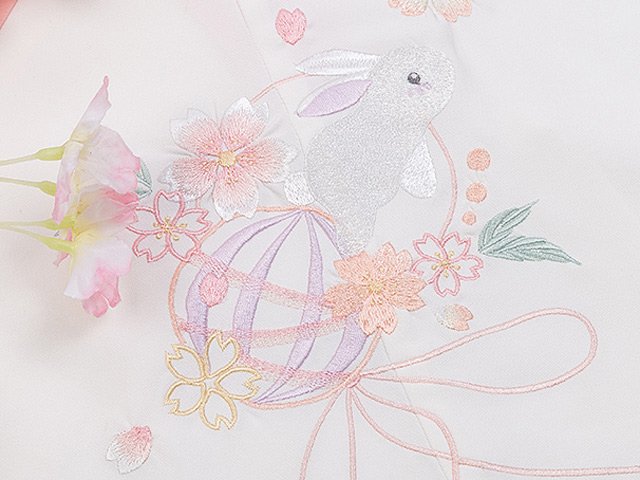 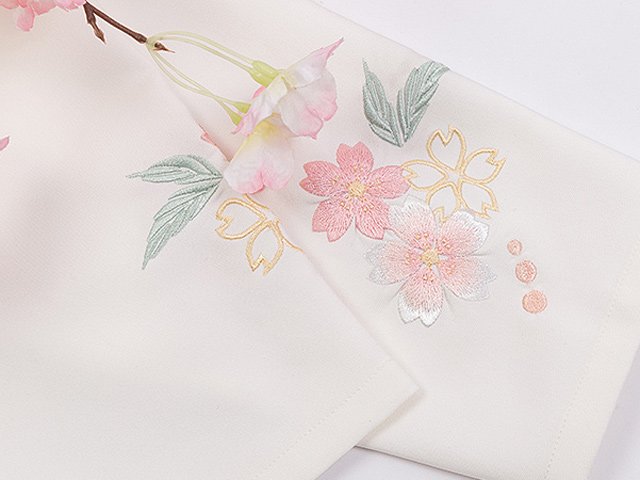 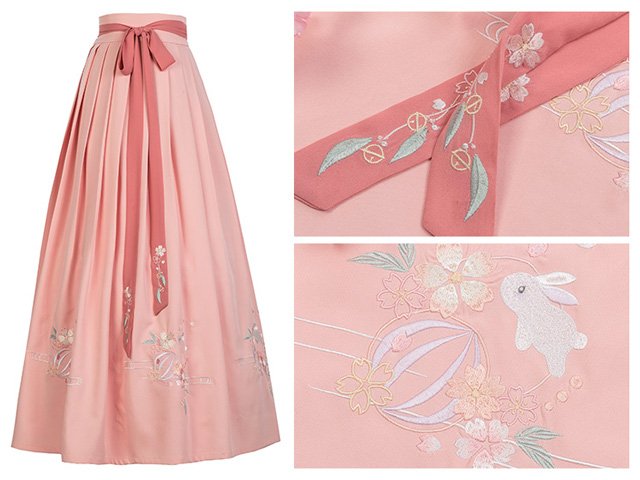 The bodice of this pink Hanfu echoes the color of the skirt and the embroidery, which is very cute.

The matching pleated skirt is also pink, and the lacing is in a pea-sand color, which is similar to pink, making it a color with a high match rate. 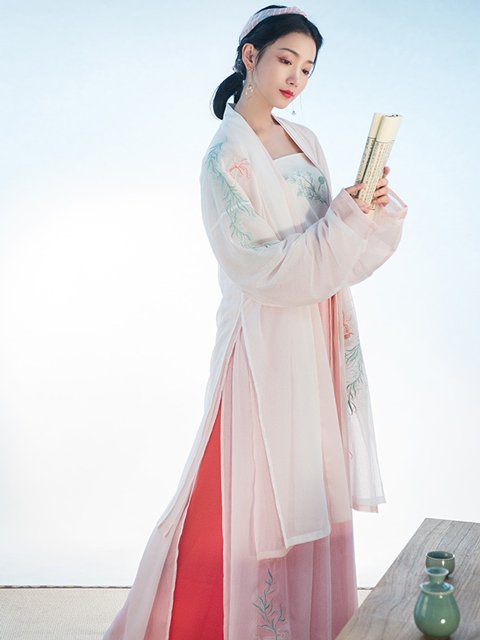 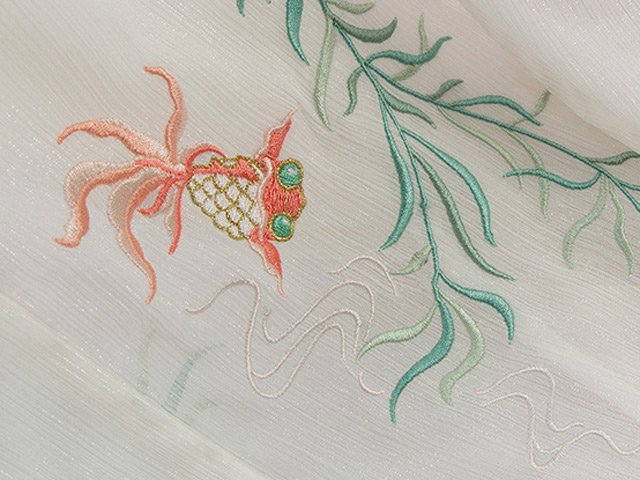 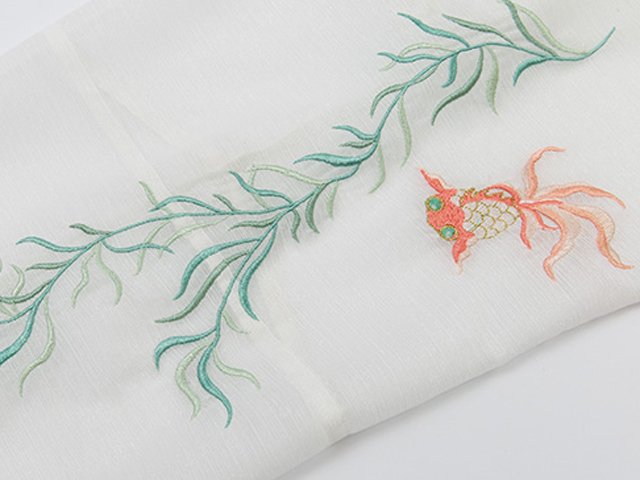 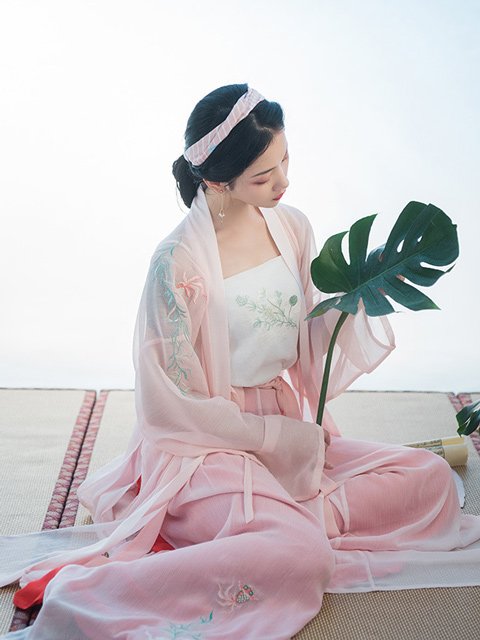 Song-style Hanfu is a very popular shape in this year, and the style is mostly simple. This light pink Hanfu is made of a Duijin shirt and pink Songku which is both aesthetically pleasing and very suitable for modern dressing habits. 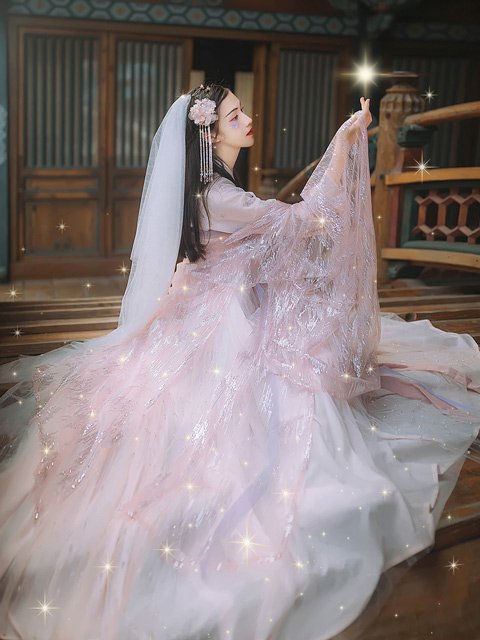 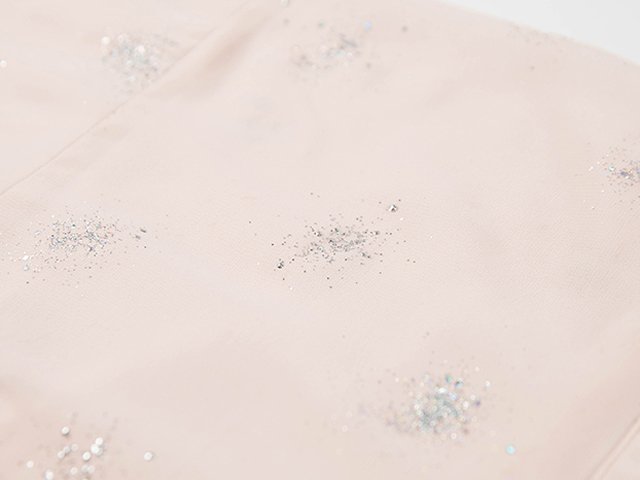 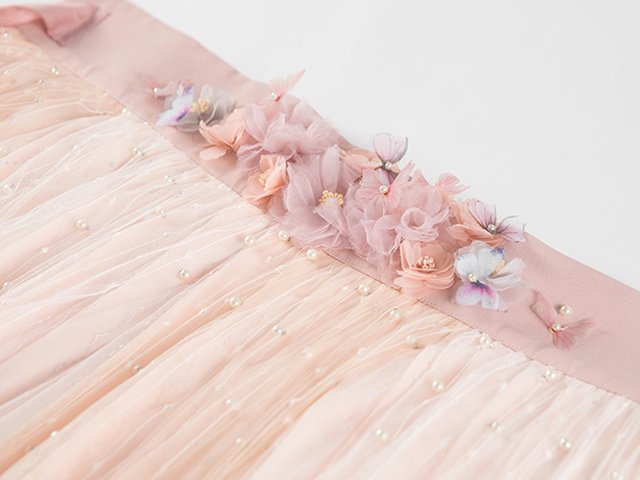 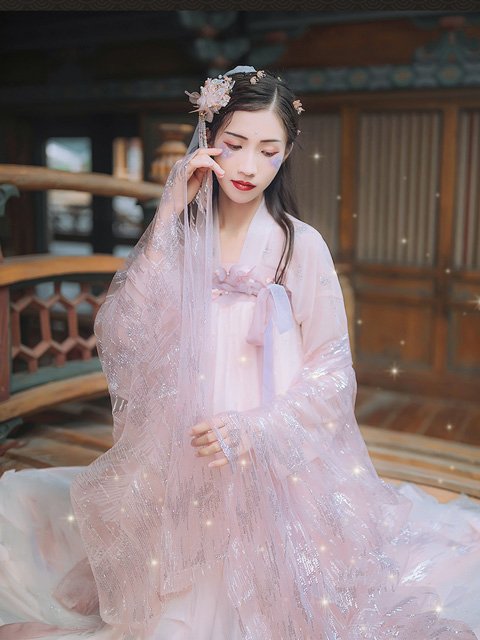 Many girls don't just like pink Hanfu but also like sparkly things, and this "Tears of Jiaoren" (Jiaoren similar to the western mermaid) pink Hanfu is made of soft gauze fabric that is soft and flowing, and the beads scattered on the mesh also echoes the meaning of the tears of Jiaoren.

The skirt is hand-stitched at the front to make the flower shape more vivid. The big-sleeved shirt is embroidered with beads on the basis of the net yarn, which adds a dazzling light and unique design to the floating and lightweight.

The overall selection of light pink, making the visual is very soft and gentle, pavilion, and with a subtle noble. 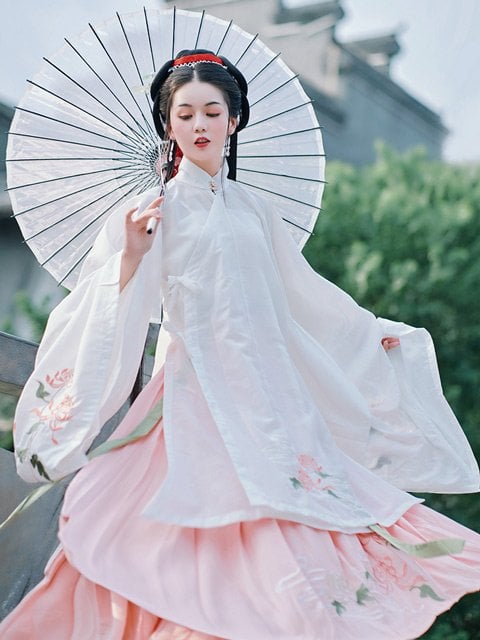 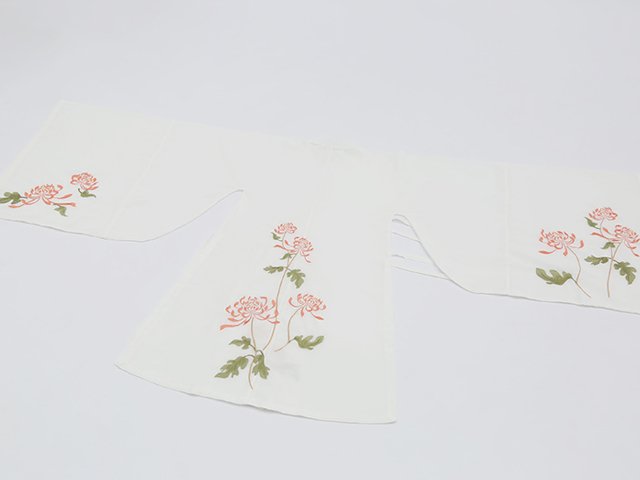 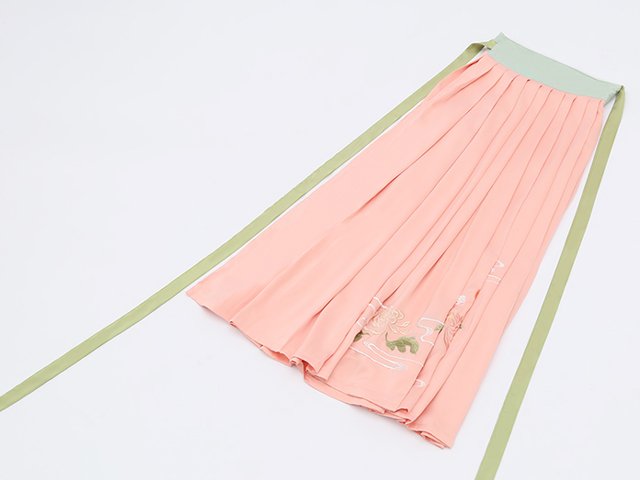 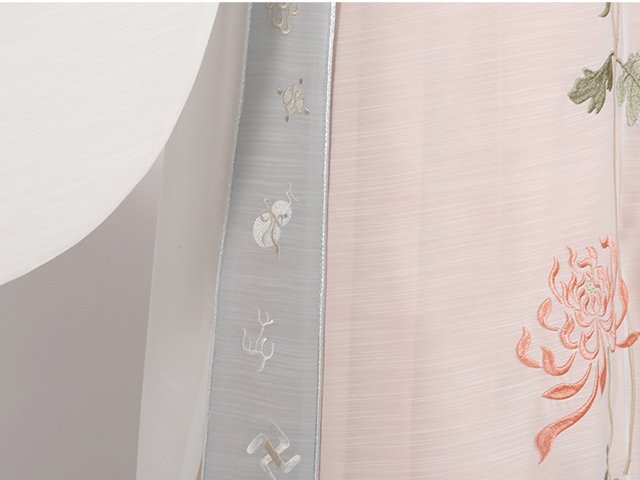 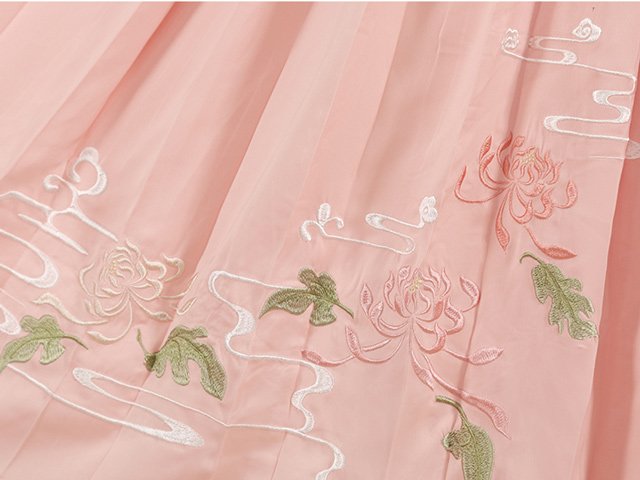 As summer is coming to an end, for those girls who are afraid of the cold, we recommend this white Changshan with an orange and pink Hanfu skirt. 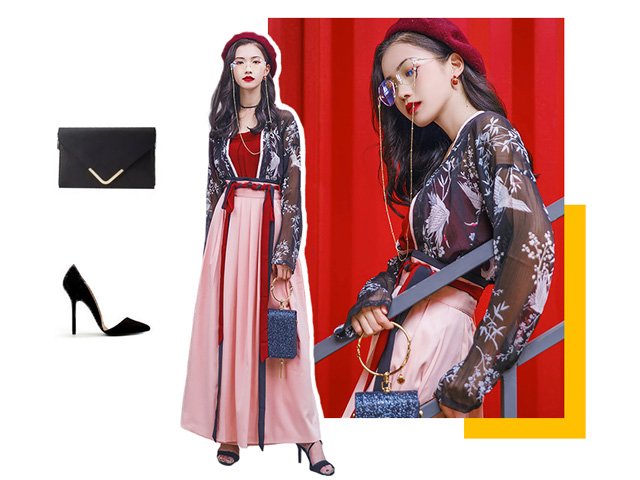 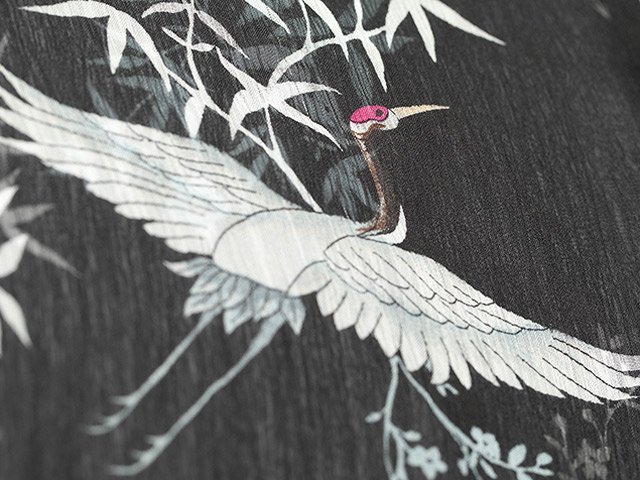 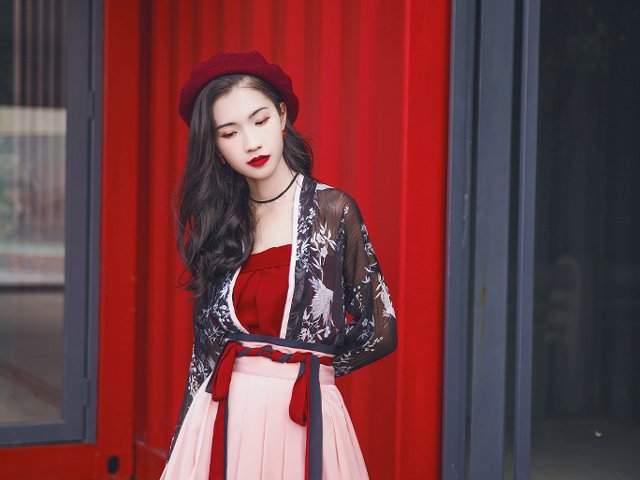 The Hanfu contains 5,000 years of Chinese culture. This pink Hanfu fuses tradition with fashion elements, with black Duijin Shangru, embroidered with Chinese embroidery patterns - cranes and flowers in sheer chiffon fabric, it's peaceful and elegant, a symbol of longevity and nobility.

Paired with a red Moxiong and lotus pink Hanfu skirt, and classic black strappy heels, it is simple and uncomplicated.

From ancient times to the present, pink has been a classic for ages. After settling, fermenting, and eventually coming to a permanent bloom, this beautiful color has grown in modern civilization, and the seeds were planted when a trend came and some artists, filmmakers, and others started using it.

Artists of different generations have presented the beauty of pink in their own different ways. When pink is combined with Chinese traditional clothing Hanfu, it creates all sorts of unexpected and wonderful effects in pink Hanfu.

If you want to know more about Chinese costumes, please join Hanfu group!

Creative License: The article is the author original, udner (CC BY-NC-SA 4.0) Copyright License. Share & Quote this post or content, please Add Link to this Post URL in your page. Respect the original work is the best support for the creator, thank you!
Hanfu HistoryWomen Hanfu
Related