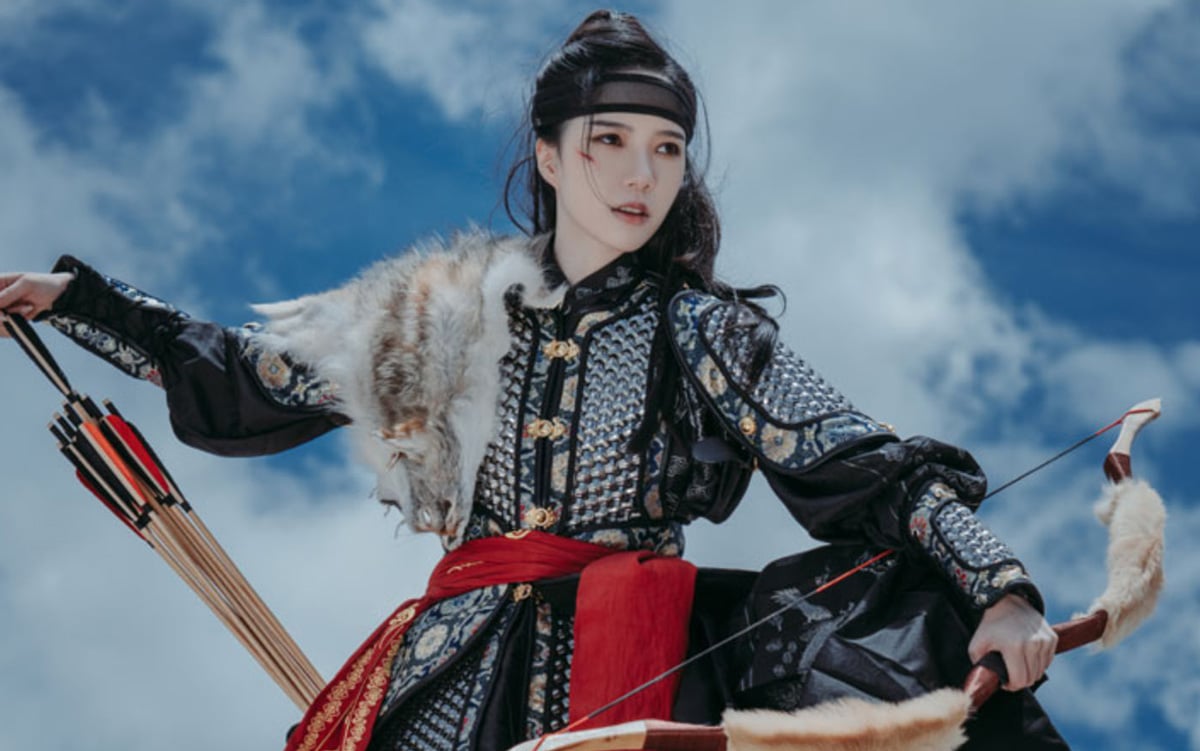 The ancient armor is to some extent equivalent to the present military uniforms, which is the image of an army and therefore must be decorated. The decoration actually works in two ways, on the one hand, it is to show the good image of the mighty and on the other hand, it is to protect the armor from erosion. Leather armor is easy to rot and iron armor is easy to rust, both need to be protected by some decorative methods. The main methods of Chinese armor decoration are as follows. 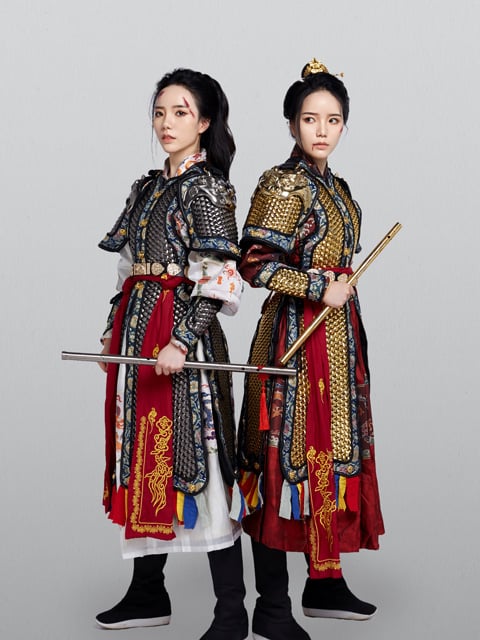 Before Han and Wei either the leather armor or the iron armor, the armor pieces are painted, and repeatedly painted with multi-layer paint. Most of the Warring States' leather armors was black, according to the painted traces of terracotta warriors and horses, and the armor of the Qin Dynasty was mostly black. Many written records of the Han Dynasty armor are called Xuanjia (玄甲, black armor), and the armors of painted warrior figurines are also painted black. 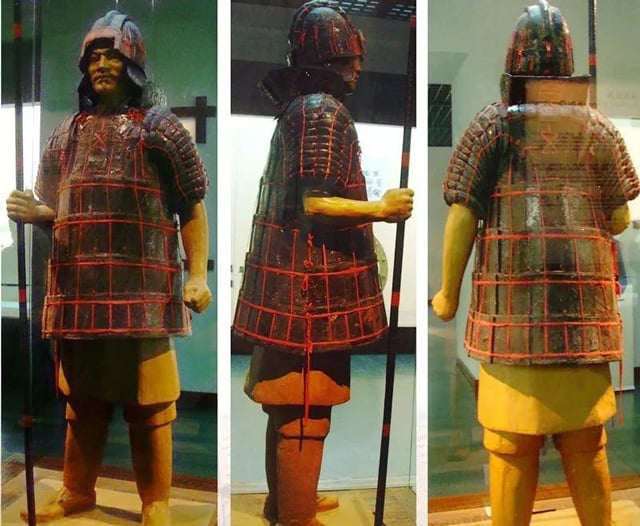 The color of black is a bit monotonous, so there is the idea of applying gold and silver pieces on the armor for decoration and painting at the same time. The painted armor for warrior in pre-Qin period has not been found so far, but the painted horse armor for war horses (for driving chariots) has been found.

Hubei Warring States Chu tomb excavated horse helmets and armors, with red, yellow, green, white, gold and other colors depicted in fine and exquisite ornamentation, which is unforgettable, it is pitiful that such gorgeous artworks were used for the battlefield.

Decoration of braiding and edge

An armor goes through a complicated embellishment process from piece to coat, and in this process, armor makers of all generations have been very ingenious and created many methods of embellishment to give the armor a second package.

The most common is to use dyed silk rope, hemp rope and leather strips to weave diamond patterns on the surface of the armor when the pieces are lined up. This method was very popular in the Qin and Han dynasties, the Western Han Dynasty iron armor had physical pieces of such embellishment, and the general armor of Qin Shi Huang Terracotta Warriors also has a V-shaped red braided rope. When each piece of armor has this line pattern connecting to each other, it is not only beautiful, but also make the surface of the armor and an additional layer of protection. 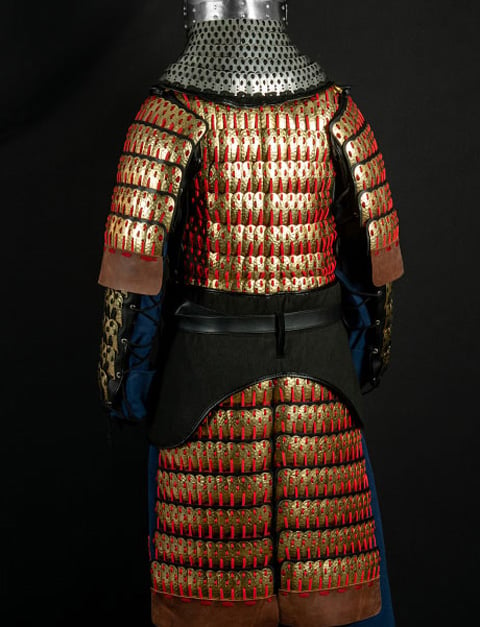 The lining is finally fixed and sewn with the armor face when the armor is finished, and the resulting edge wrap is another important decorative means, generally depending on the identity of the armor user, the corresponding high-quality materials are chosen. In the Tang, Song, Yuan and Ming dynasties, most of the wide edges of iron armor were made of precious brocade, fur or leather, and even if the cloth armor was made of woven materials with patterns, special decorations were also embroidered.

The gold armor silver armor in popular fictions is not made of gold and silver materials. Either gold or silver itself has no resistance to striking force, completely unsuitable for armor. The so-called gold and silver armor, are iron and copper as the core, gilt silver outside. Gilt armor pieces were found in the excavated artifacts from the Liao and Western Xia dynasties. 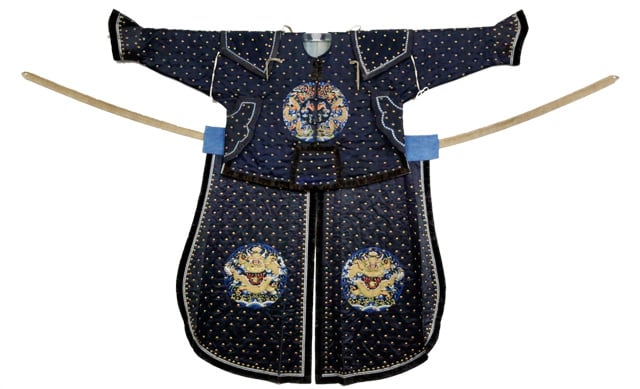 As for the gilded armor, Zhou Ma's Draft History of Chinese Weapons recounts a report in the Nanking Central Daily News of March 23, 1935, that a group of weapons from the Zhou Dynasty had been unearthed in Yidu, Shandong, including a gilt bronze helmet. However, according to other experts, the report was found to be untrue. Before the Spring and Autumn and Warring States, bronze stuffs were decorated mostly with inlaid, so far no gilt silver has been found, perhaps this helmet is a thing after the Qin and Han dynasties. Throughout the ages the records about the gold armor are more common, especially in the Tang Dynasty, such as the "New Book of Tang · Taizong's Chronicle".

The earliest engraving of decorative patterns on the surface of armor and armor parts was on bronze armor in the pre-Qin period. The bronze armor pieces, arm armor and back armor remnants excavated in Lijiashan, Jiangchuan, Yunnan Province, are all engraved with fine ornaments in dark lines. With patterns of bears, tigers, monkeys, fishes, lizards, and insects are symbols of the culture of Yunnan Province. 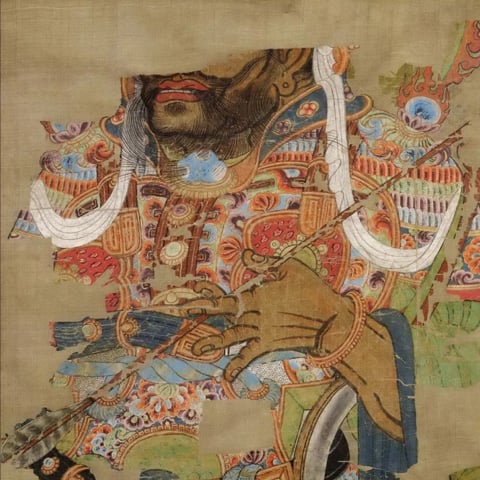 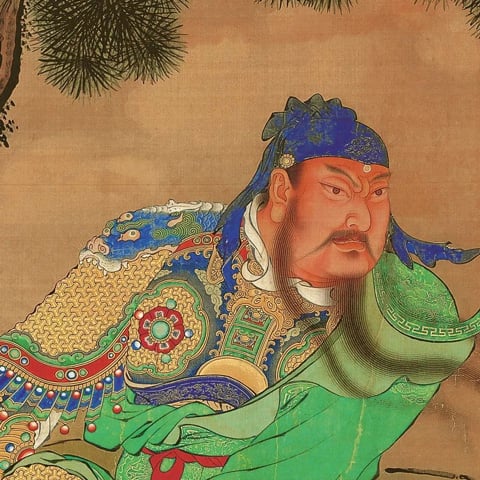 Putting gold, silver and precious stones on the surface of armor and helmets were popular in the Yuan, Ming, and Qing dynasties. Some leather, iron helmet heirloom collections of the Yuan Dynasty, with gold and silver wire inlaid sun-moon patterns, cloud dragon patterns, and seawater patterns, show extremely high craft skills. The war supplies steeply got a sense of beauty and mystery.

On the iron helmet used by Emperor Wanli unearthed in Beijing Ding Tomb, there are the statue of Zhenwu and Tianwang made of gold inlaid on the top of the helmet face and armor, highlighting the luxury of the emperor.

The Qing Dynasty was the pinnacle, the armor of princes and dignitaries was inlaid with gold and silver, beads and jade. Qianlong emperor is even more extravagant, the armor he worn in the big parade used steel beads armor pieces more than 600,000 pieces, including gold and silver, decorated with colored lacquer, and embellished all over the dragon pattern, regard as one of the best ancient armor. 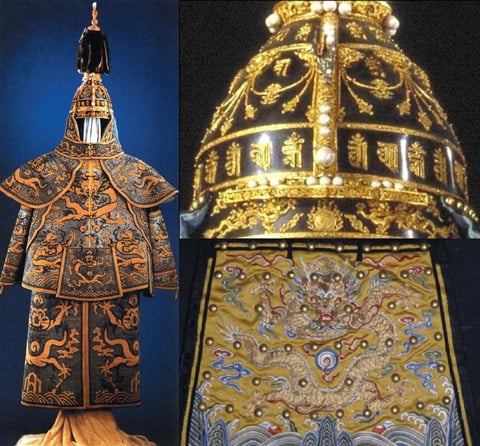 In the manufacture of armor, sometimes the makers also used some special designs, making some special armor pieces, and armor parts to enhance the decorative effect of the armor, such as the folk collection of the iron armor pieces from the Liao Dynasty which cast a god of heaven statue. Three small pieces of armor form a unit under the large armor piece. Four pieces of armor form as a unit to make up the armor, especially like the temple niche gold shining. 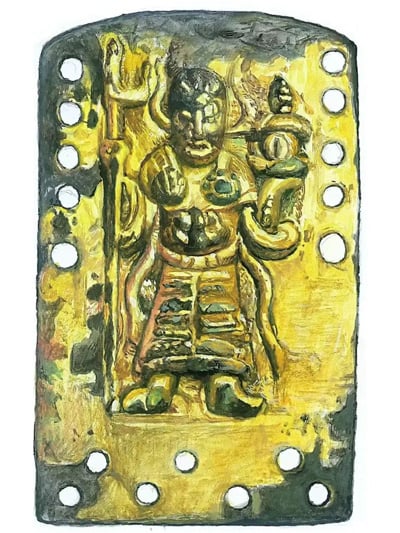 The tiger's head and dragon's head on the shoulder armor, the beast's face and phoenix wings on the helmet, are all decorative parts of the armor that often appeared in the Tang, Song, Yuan, and Ming dynasties, and served to enhance protection in addition to decoration.

The study of ancient Chinese armor is still at a stage of primitive accumulation. And the attention and research of many scholars, archaeologists, and enthusiasts are all aimed at unveiling its mystery. A few decades of exploration cannot search for the profound accumulation and full connotation of thousands of years. Its completion and perfection still need more traditional armor lovers consist. 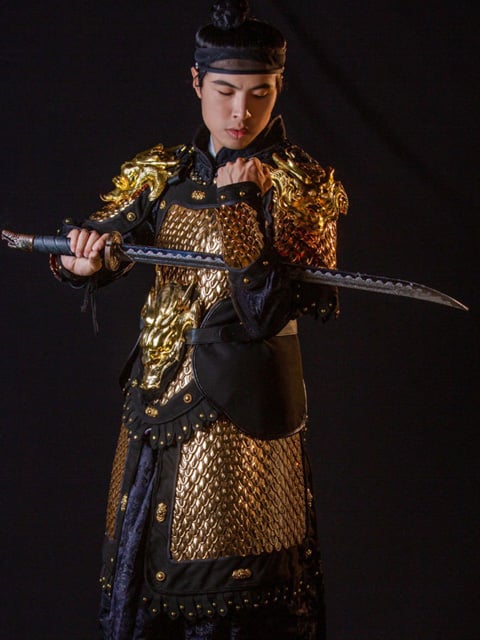 Watkins
Creative License: The article is the author original, udner (CC BY-NC-SA 4.0) Copyright License. Share & Quote this post or content, please Add Link to this Post URL in your page. Respect the original work is the best support for the creator, thank you!
china armor
Related 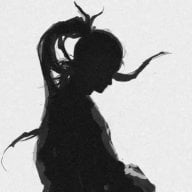