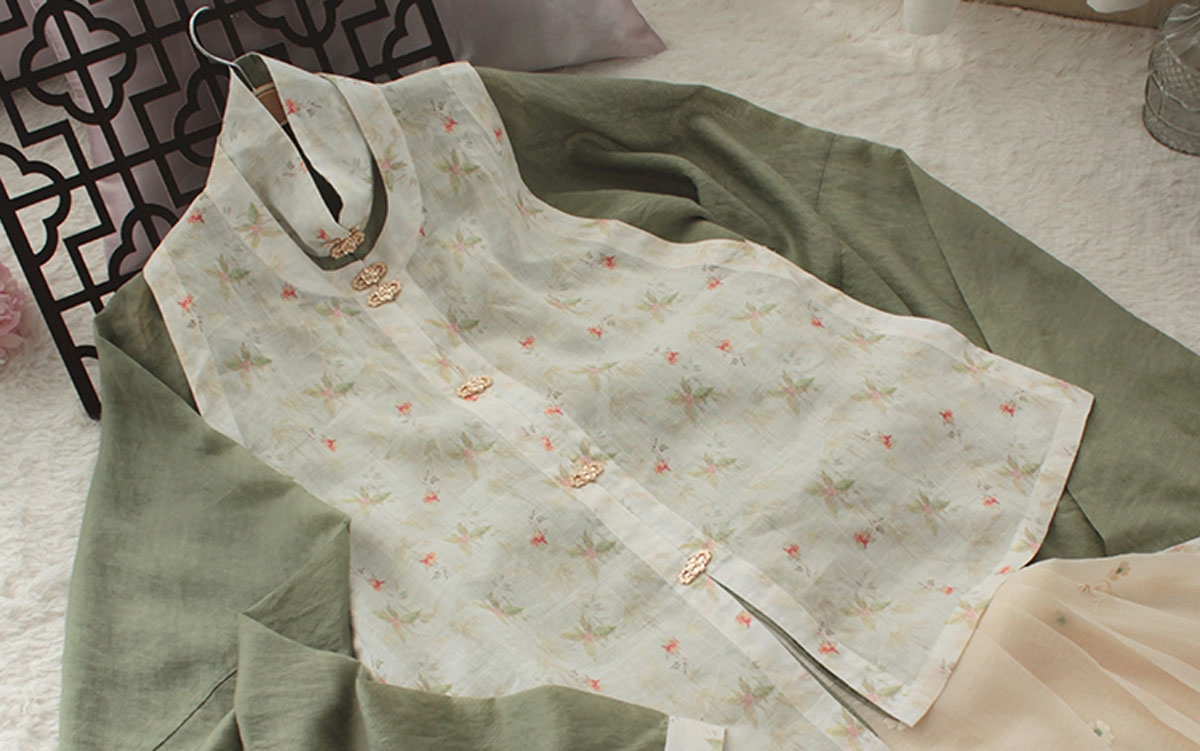 "Collar" refers to not only the area of a piece of clothing around the neck, but also the fabric below that. Since hanfu is almost always constructed of two pieces of fabric that aren't fully connected at the front, and put on like a jacket, collar also refers to ways that these two piece of fabric connect once the piece is on your body. 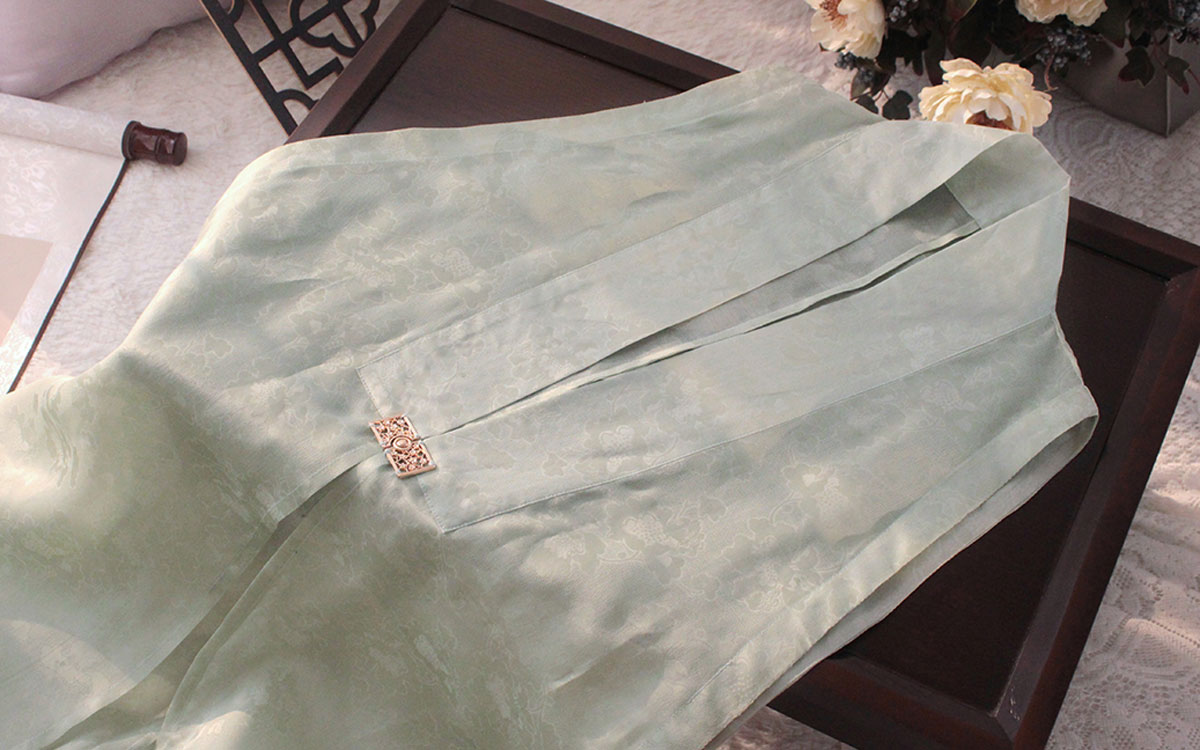 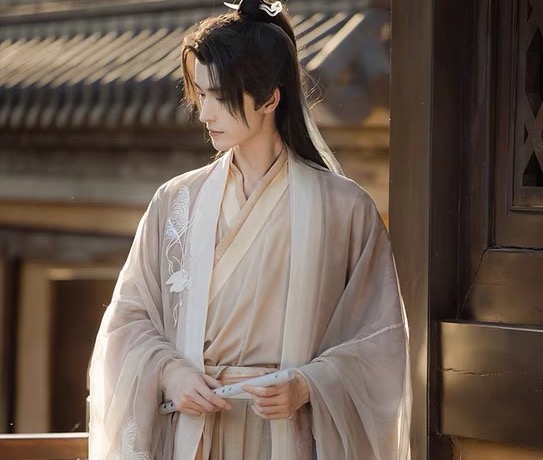 Probably the first type of collar that you’ll see—the crossed collar, or jiaoling. This collar consists of two overlapping pieces and is usually secured with two to three ties, with a thicker or contrasting border along the edge of each piece. It’s almost always right over left, or if you think about it in terms of how to put it on, you tie the left ties before you tie the right ties. The result is a y-shaped collar when viewed from the front. Ming dynasty people may have done it the other way, as well as various non-Han groups and clothes put on the deceased at funerals, but it’s generally a good rule of thumb to follow right over left. as it’s one of the most important cultural concepts in hanfu. These can be shallow or deep, the cross occurring just below your neck or at the center of your torso, depending on the style. 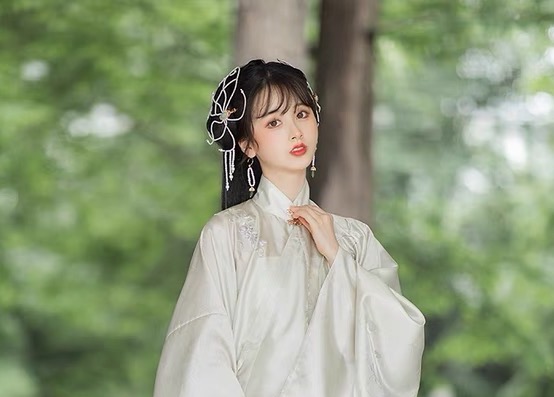 A trademark of the Ming dynasty, the liling or standing collar is a stiff collar that stands up at the neck sort of like a turtleneck, with the center rounding down to the base of the neck, where the left and right sides are connected by a button or clasp. Further down the neck into the torso, these are combined with the parallel or diagonal collar below. It’s also referred to as the 竖領/竖领/shu4 ling3/vertical collar. There's also a way of wearing this collar called 翻領/翻领/fan3 ling3/turned collar, where you essentially fold down the standing collar to reveal the inner lining, which can be in a different color. 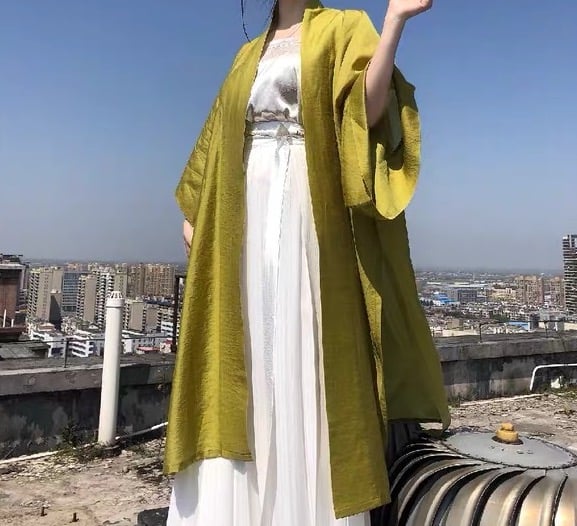 Another ubiquitous collar in hanfu, the parallel collar is often seen in outerwear pre-Ming dynasty and in the shan and ao of Ming dynasty tops. For the Ming dynasty parallel collar, this means that after the standing collar ends, the left and right halves of the top are symmetrical and buttoned together down the front with buttons or clasps, as pictured in the liling collar section. Other duijin collars are usually open and also have left and right halves straight down the front with a slight space in between, as pictured above, and are also called 直領/直领/zhi2 ling3/straight collars. They may have a tie in the middle or not. 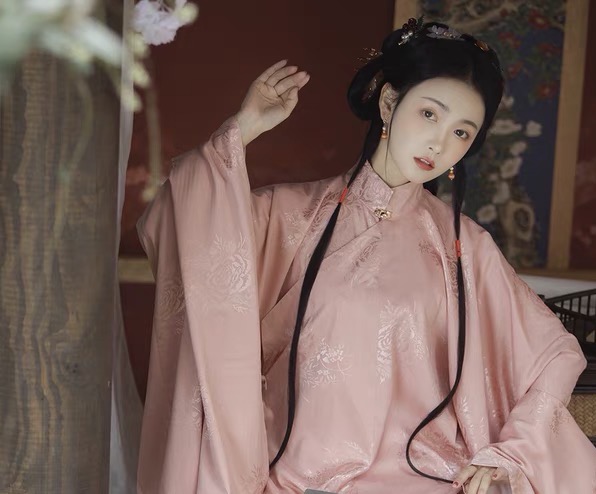 This is the alternative option to the duijin collar for the liling collar. Also called 大襟/大襟/da4 jin4/largre collar, this collar slopes down diagonally from the end of the standing collar to the wearer’s right, ending on the armpit of the wearer’s right side, secured by buttons, clasps, or ties. This and the parallel collar, the ones ending in jin, refer less to the collar itself than how the rest of the fabric is arranged down the front: symmetrically, or diagonally. 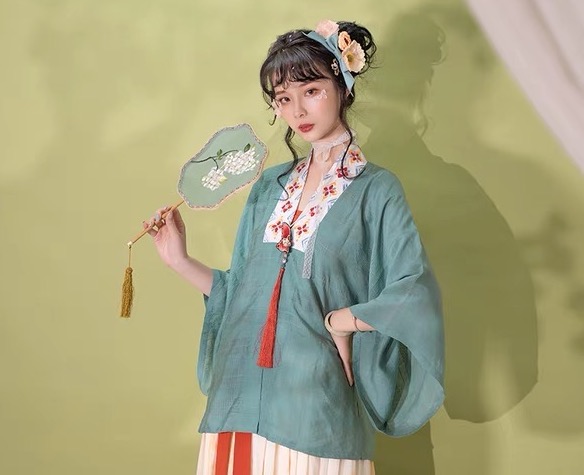 The heling collar is very similar to the parallel or straight collar, but the top half of the collar slants slightly towards the middle to come together in the middle, then hang straight down. Most often seen in Song and Ming dynasty outerwear, and pretty much exclusively constructed in shan and not ao, this variety is usually worn open and not tied or clasped together, but can also be installed with ties or buttons to keep them closed. The Song dynasty 折领/折領/zhe2 ling3/folded collar also follows a similar template with the sides of the collar folded back on themselves and stitched in place. 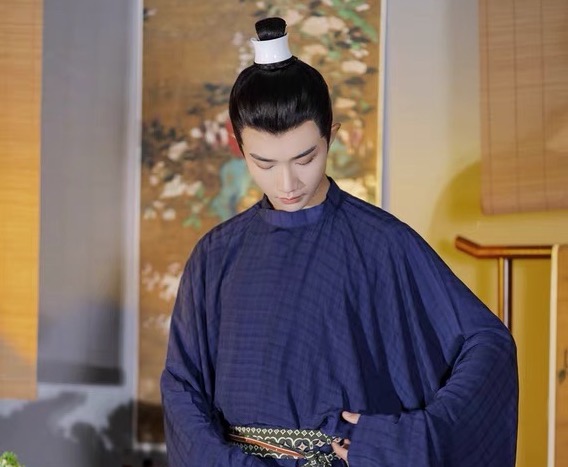 The round collar is most well-known as part of the 圓領袍/圆领袍/yuan2 ling3 pao2/round collar robe, but appears in all sorts of hanfu—Tang dynasty underlayers, for example, have a lot of round collar versions, and Ming dynasty aos and shans often take a yuanling-duijin form. Most yuanling are yuanling-dajin, secured with four buttons, two at each side of the neck and two halfway down the body, so that there’s a section of the middle that overlaps, but from the Tang to Ming dynasties, the amount that the pieces of fabric overlap can change.

For example, the Tang dynasty round collar stands up slightly from the neck and is often turned outwards to be worn in a 翻領/翻领/fan3 ling3/turned collar, while the Song and Ming varieties aren’t perfectly symmetrical and don't have that feature. The duijin type of round collar in Ming dynasty hanfu follows the same rules as the liling duijin collar, with a round collar that’s separated into left and right pieces but clasped down the middle with buttons. 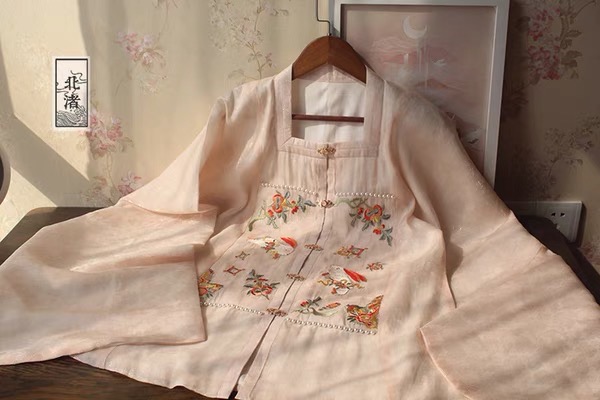 The square collar is much like the round collar, except it’s square; go figure. It’s also usually found in Ming dynasty clothing and isn’t extremely wide, almost always duijin and clasped down the front. 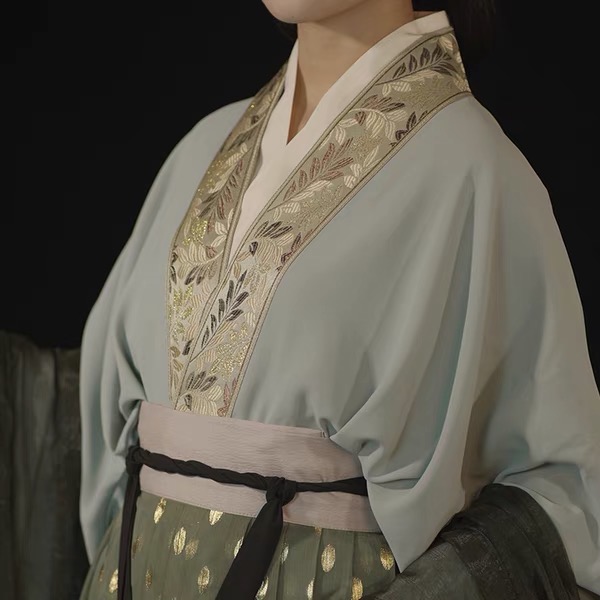 Less of a collar type and more of a way to wear a collar, the cross-worn collar is when you take a parallel or straight collar and cross it in an X over the front of your body, imitating the jiaoling style, and keep it in place by tying the skirt over the bottom of the top. Some hanfu in this style also come with ties to keep it in place. This one is usually seen in Song dynasty women's clothing and results in a very low cross-collar look further down on the torso, usually only used in outer layers. 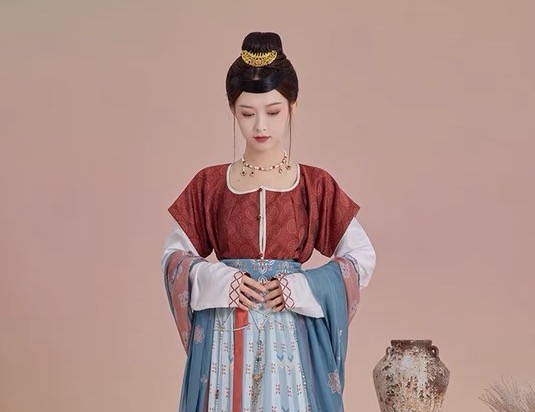 Very similar to the round collar, the U-shaped collar is a collar exclusive to feminine hanfu that was particularly popular in Tang dynasty short outerwear and tops. It’s similar to the round collar in that the neckline is rounded, but hangs further down and shows a bit more cleavage. It also usually doesn’t have the crossed-over design that the round collar features, either constructed like a t-shirt so that you put it on by just sliding it over your head or buttoned down the front, thtough it can also sometimes be kept closed with a similar overlapping button structure to the yuanling. 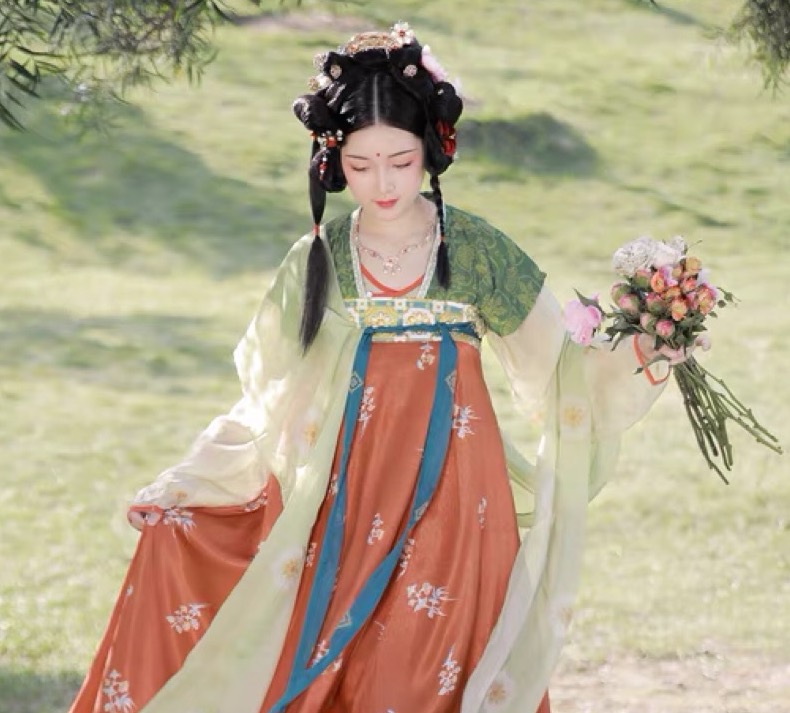 Another Tang dynasty feminine special, the chuiling collar appears most often in Tang dynasty short outerwear, worn over a long-sleeved, slightly more high-necked top or some other form of inner wear. It features something that resembles a fairly deep symmetrical V-neck, secured with ties at either side—the point of the V can be deep enough to touch the waist, or shallow enough to resemble a tanling collar. 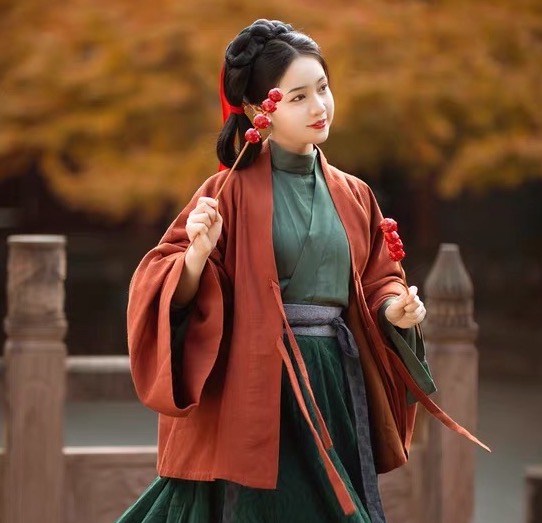 Exclusive to certain types of inner ru in the Han and Jin dynasties, the quling is a rarer variety of collar that appears in Jin dynasty ru, or Jin ru, as they’re sometimes referred to. One side of the top has a piece that curves around the neck slightly, sort of like a turtleneck, and then the other side is pulled over and secured with a tie much like the jiaoling collar. These aren’t made very often but do have a unique charm to them—they’re best accompanied by a second outer layer top or a piece of outerwear.

There are a couple more less commonly seen collars out there too, but these ones cover most of them!

Hanfu in Components III: The Body 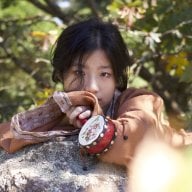